So, the morning is good, but hungry – again, an urgent search for a source of hot food, since there is no desire to visit yesterday’s fragment of forgotten times. And again, everything opens only at 10 – 11 am .. And the whole day ahead and we want some hot food. As a result, at the other end of the unforgettable town of Monastyrishe, a civilized food point “Cafe Paris – Cafe de Paris” was found. As it appeared, they were also not opened at 9, as stated in the Google Maps, but at 10. But we had to put up with it. 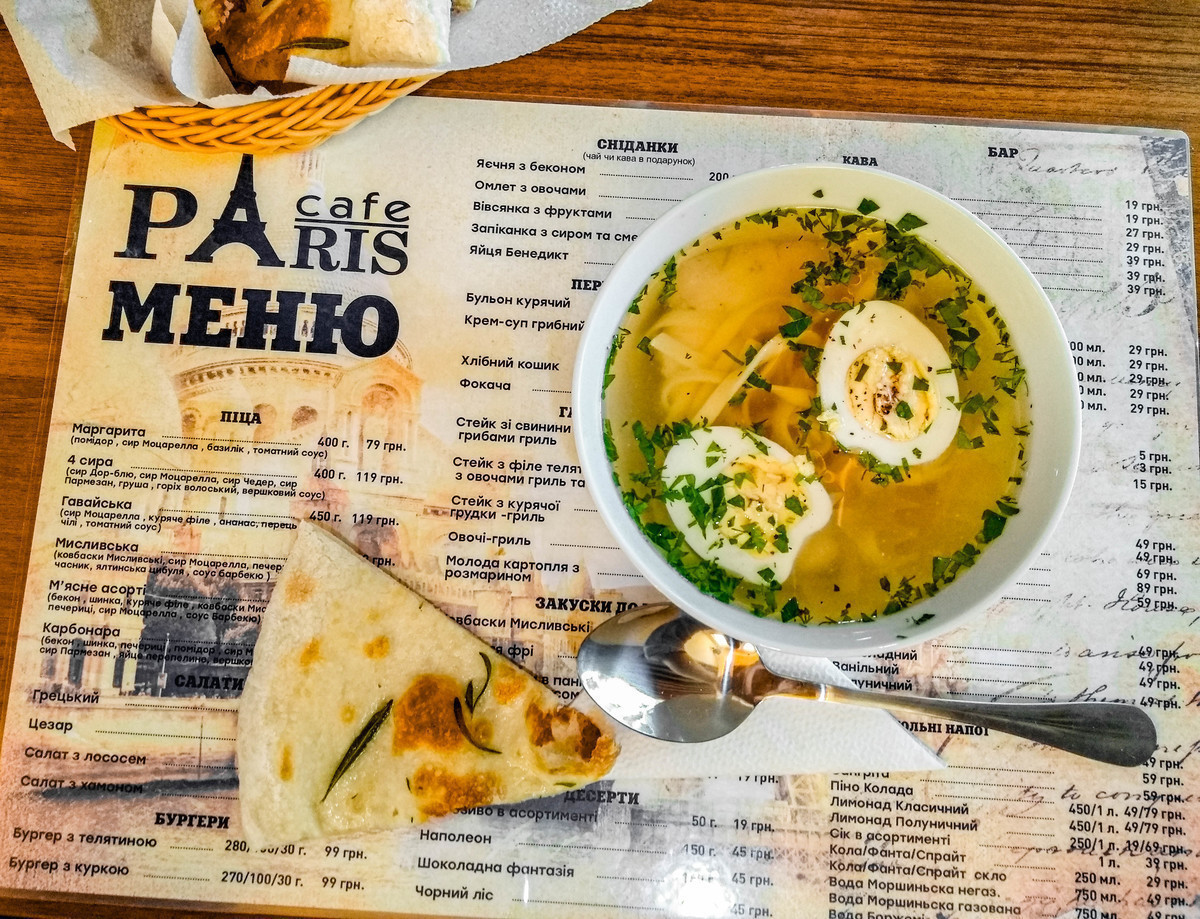 To be true, we had some adventures here also – while we were waiting for our food, the light turned off several times in the cafe. And every time we decided to quit qaiting and go to the store for bread with canned goods, it turned on and we sat down to wait further. We ate with pleasure and drove on.

Nemirov is an ambiguous place. Some say that it’s beautiful there, while others say that it’s better not to get out of the car in spite of any beauty (it’s not safe). For the short time that we spent there, we did not manage to notice anything that would make us think of the insecurity of the city. Although we did not spend the night there either because of the reviews about the hotels.

So, in Nemirov, we were interested in the Bratslav mill and the Shcherbatova palace. 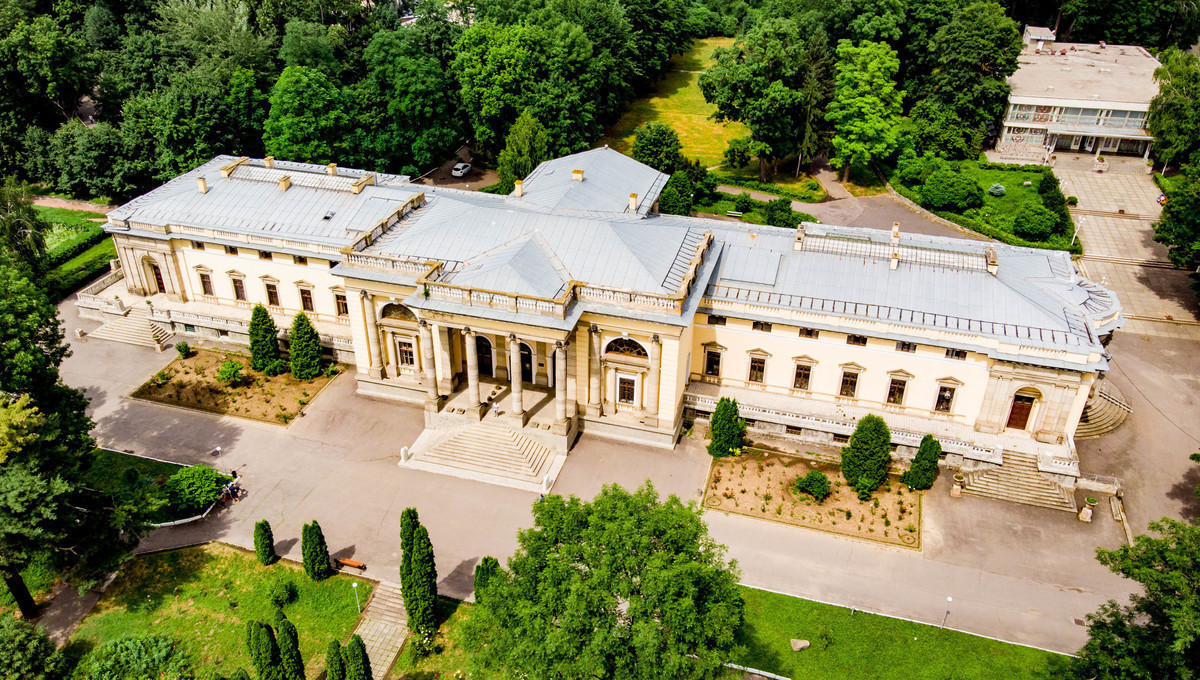 Finding them was not difficult at all. The palace was built at the turn of the 19th and 20th centuries on the site of a medieval castle and a later estate of the magnates Potocki, designed by Czech architect Jiri Stibral.
Around the palace there is a beautiful well-kept park, and the building itself is now occupied by the “Avangard” sanatorium. 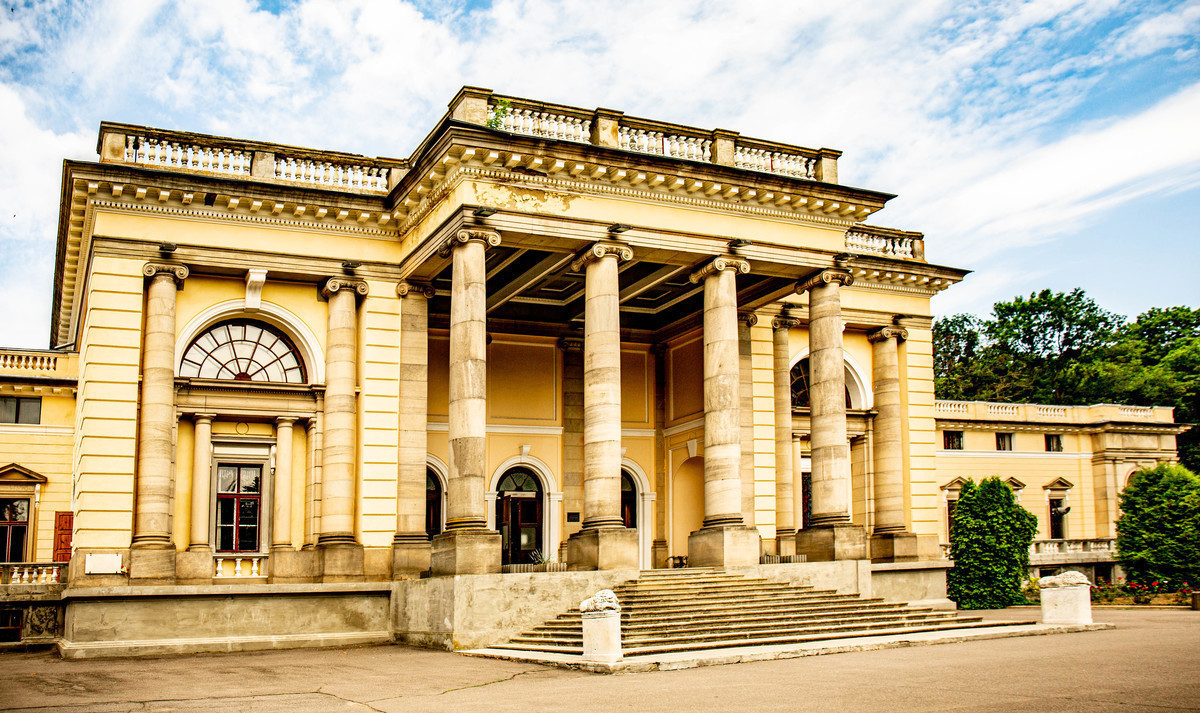 The Bratslav mill differs in architecture from all that we have seen during this trip. It resembles a fairy tale house or a tavern (well, as for me)) The beginning of the mill work – 1862. In 1905, on the basis of the mill dam, the Czech architect I. Stibrala designed and built the first power station in Ukraine. The mill is called Bratslav due to the fact that it stands on the highway of the Bratslav direction.

When we approached it, we saw the gates wide open and decided not to miss the opportunity. 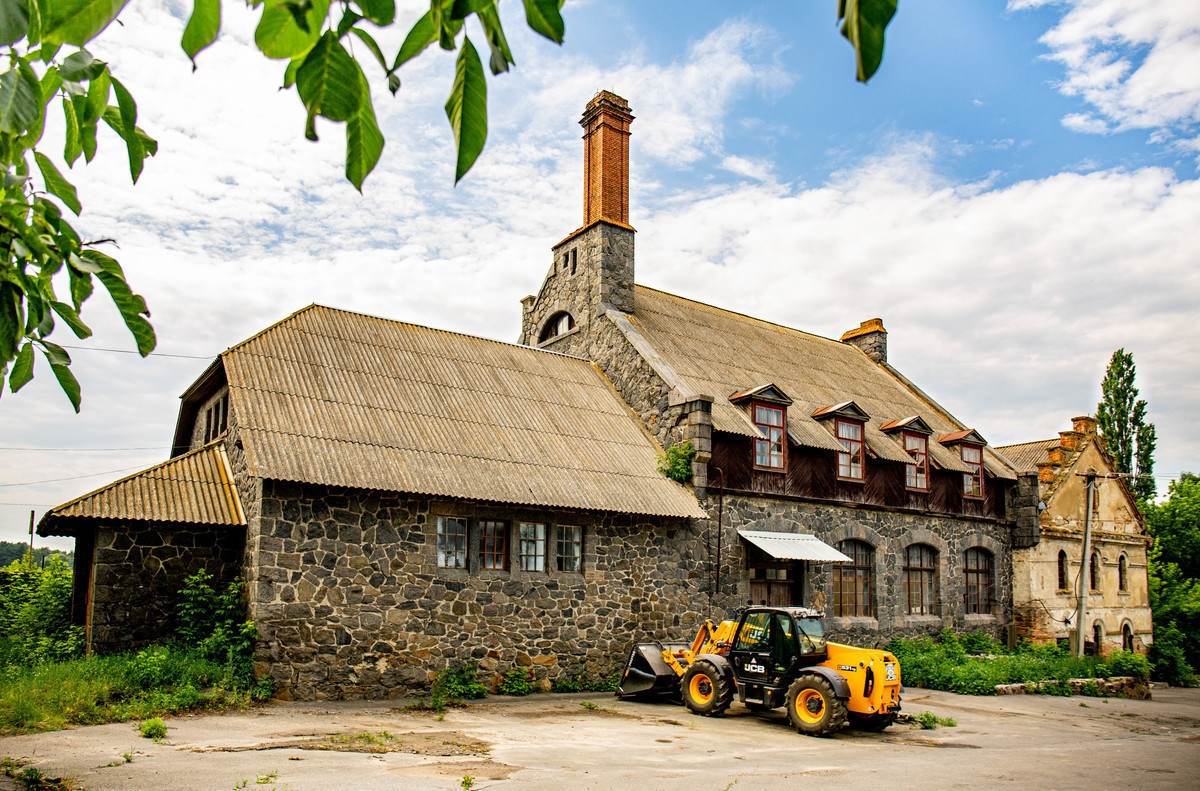 While we were unloading from a car, a man came out. He said that at the moment they have a “firm” here. Therefore, we were not allowed fly, but could walk around with a camera. He even opened the oldest building for us. 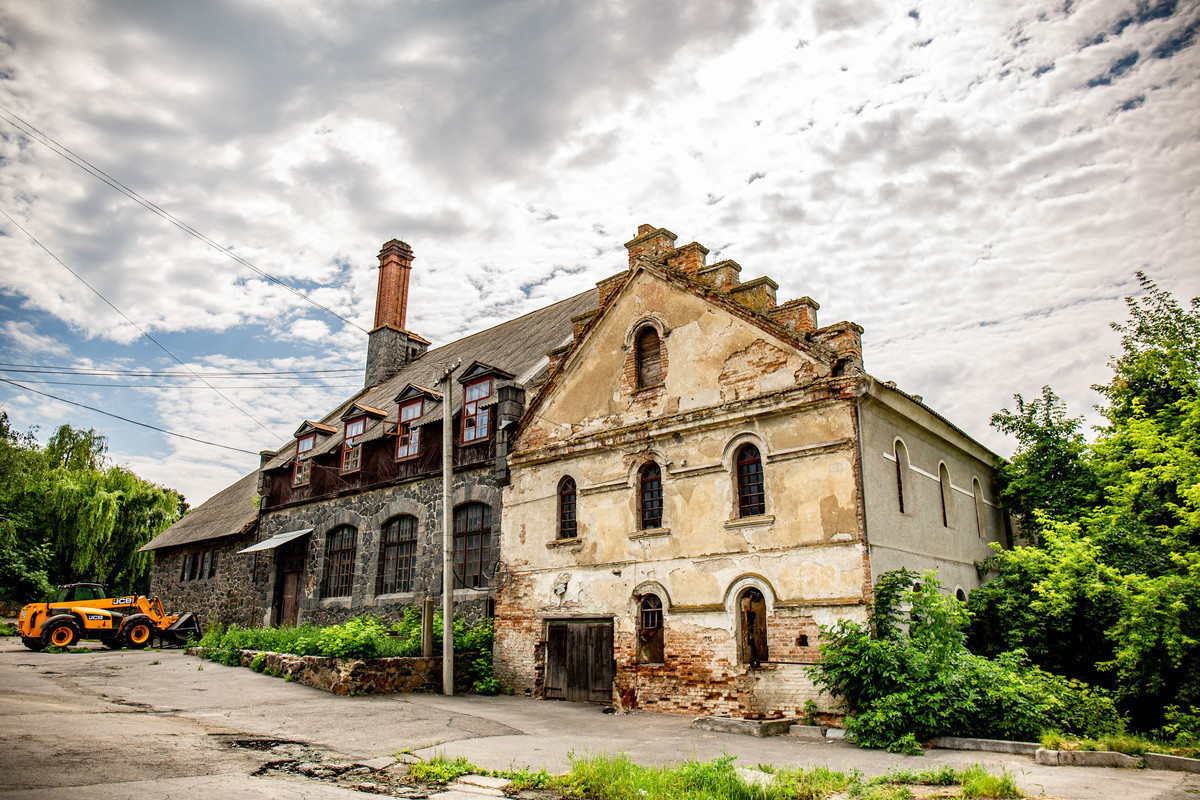 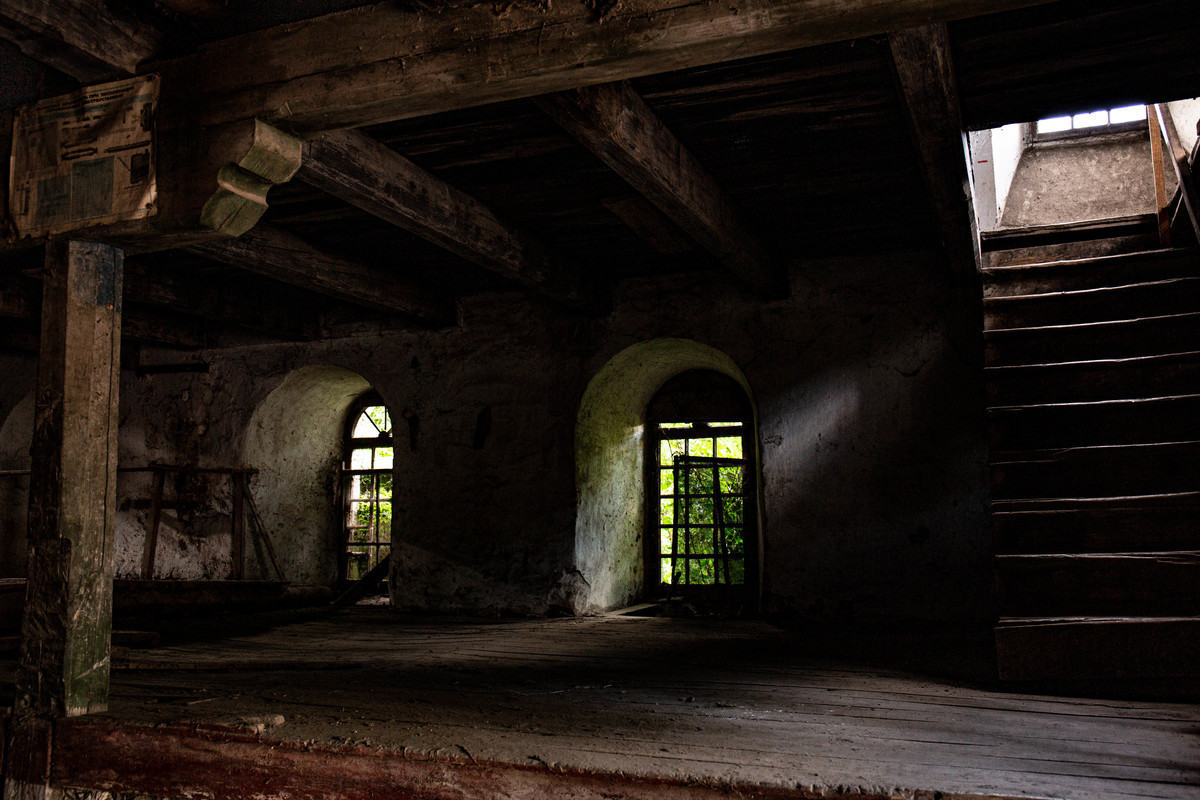 That was all he told us. And he did not allow us to look into other buildings. Well, okay))

The next object is the village of Pechera.
We were attracted here by the Potocki estate and a huge mill of them. Although the mill is considered to be standing in the village of Sokolets.
Before the trip, I saw photos of this mill, but in real life it turned out to be much grander! This complex is just breathtaking! 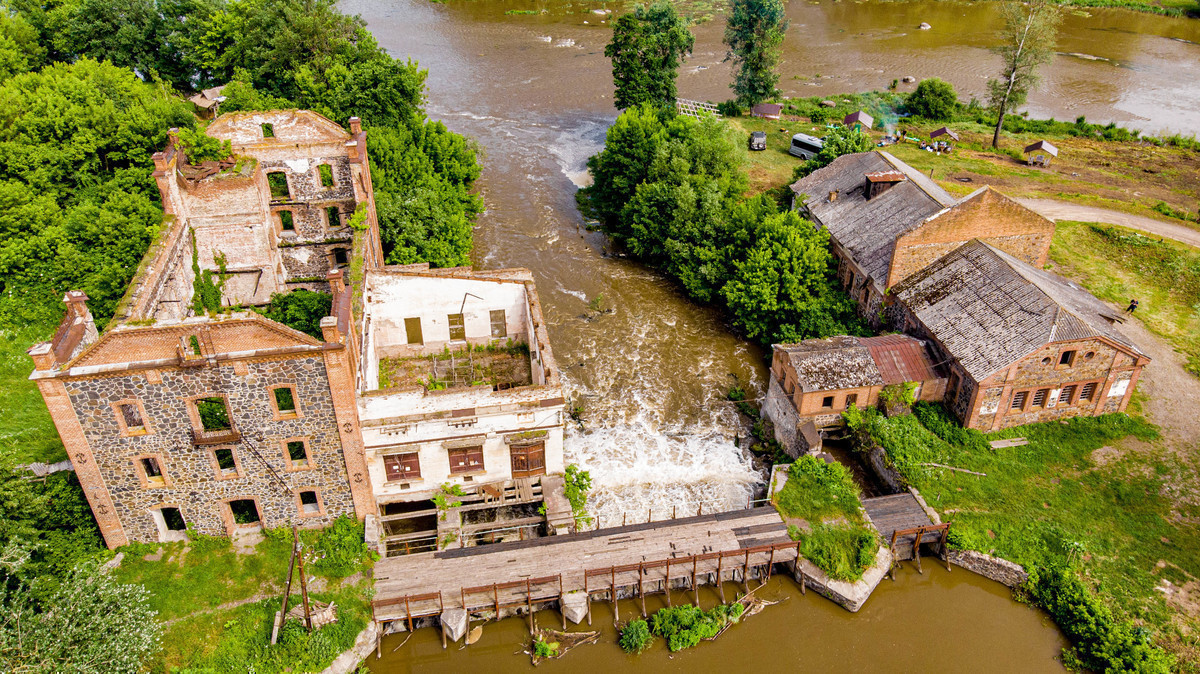 Near the mill you have to speak louder – the noise is impressive due to the powerful flow of water.
People are resting on the shore, and we walk around in admiration.

A wooden bridge is built over a raging stream. It seemed a little unreliable to me, but the locals most likely run on it without a second thought. Most likely, my impression was due to the powerful water flow under the bridge))) 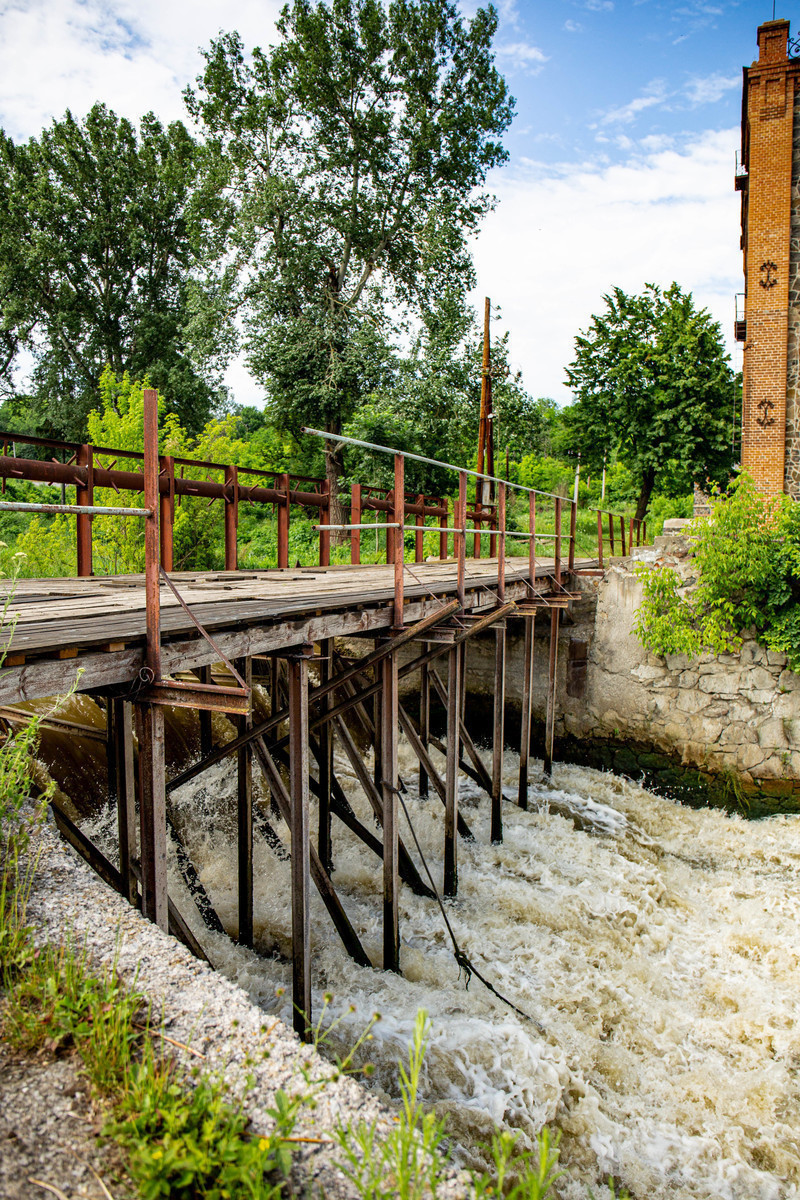 It was built by architect Jan Goyrich in 1894-1898, and in 1921 part of the mill was rebuilt for a hydroelectric power station, which worked until the 1992 fire. As a local resident who came to talk to us told us, this power station provided electricity for three villages. As local residents thinks, the mill was burned on purpose, and immediately after burning out all metal parts and mechanisms were immediately taken out for scrap. Just image, the original (set back at Potocki time) centennial mechanisms. The villagers believe that this power plant made issues for someone – and they burned it and everything that left was taken out to make the restoration impossible.. Uh .. 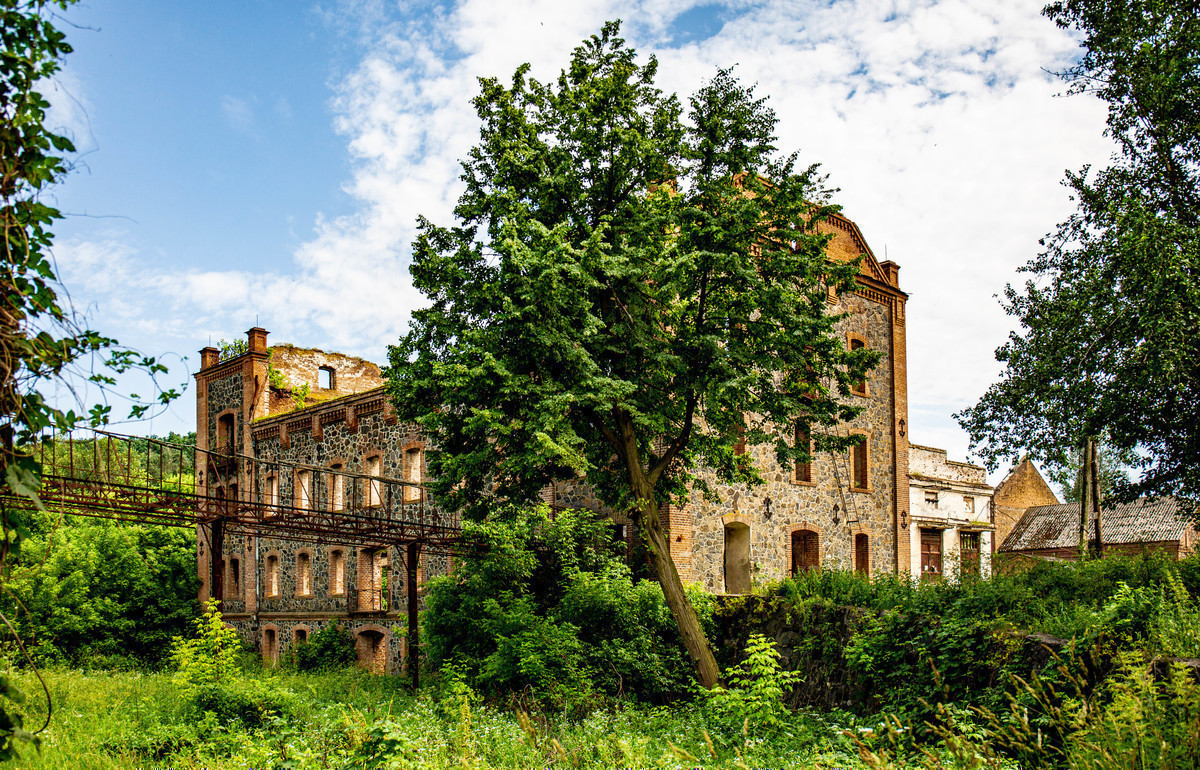 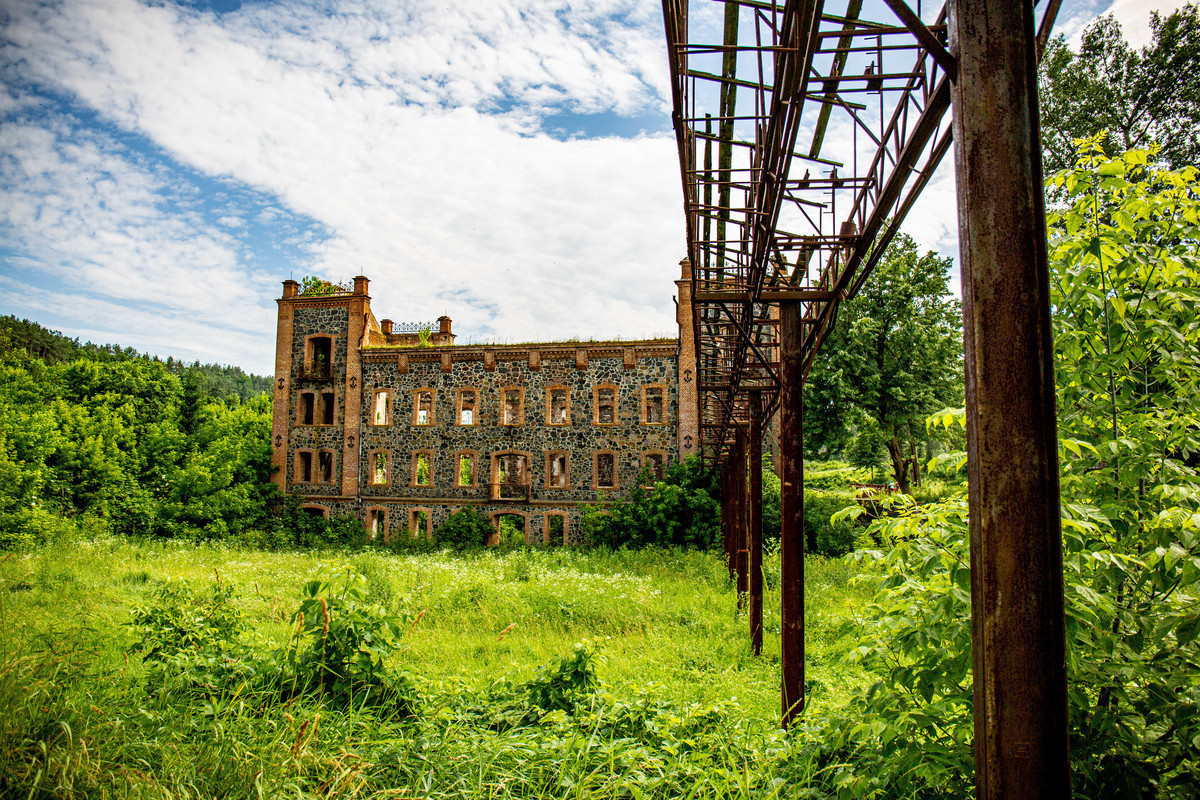 There are also mentions in the network that someone wanted to make a recreation center or something like that here approximately 5-7 years ago. But, apparently, it didn’t work out.
Now here you shoot make films – you can get large-scale and atmospheric scenery))) 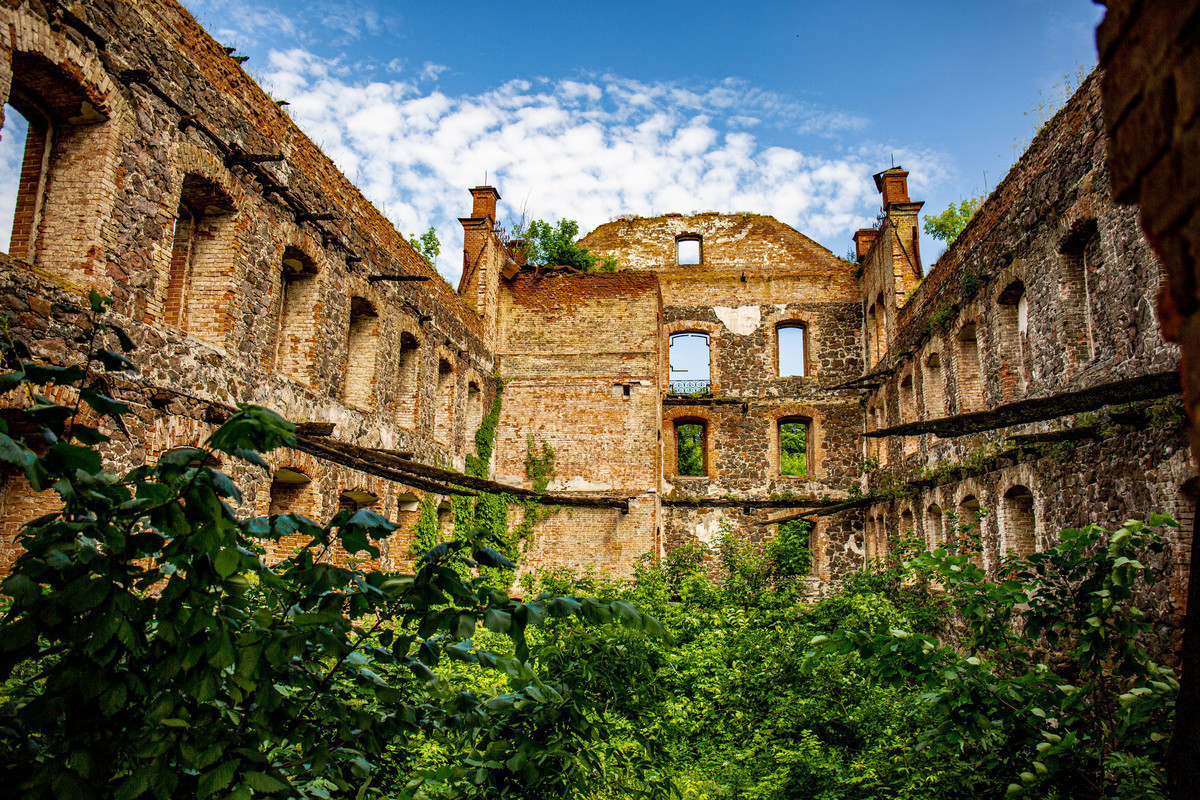 Well, the next stop is the Potocki Palace itself in the same village.
Wikipedia says the city is a resort. Honestly, in the weather that stood, I would have thought more than once before going there – heavy, wet stuffiness, mosquitoes and midges. Well, a fact – it is good near the river.
To begin with, we tried to figure out how to get to this exact palace in the village. “Ride along that green fence and you will find it.” Well, yes, for sure))) Having asked more than one person, we got there. Most responded the followin “to the sanatorium – there.”
At the entrance there is a grandiose gate, and an amazing construction is visible behind them)) 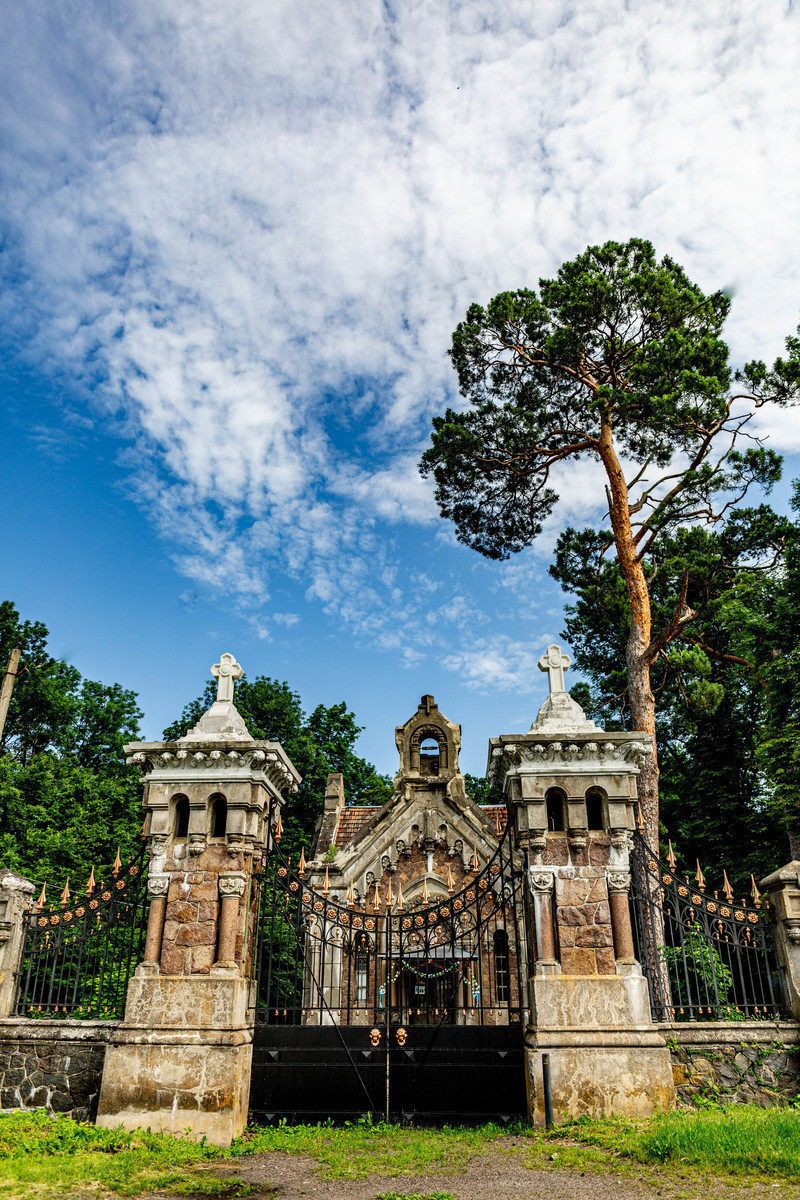 This is not a gingerbread house – this is a mausoleum-tomb-church of the Potocki (opinions differ). 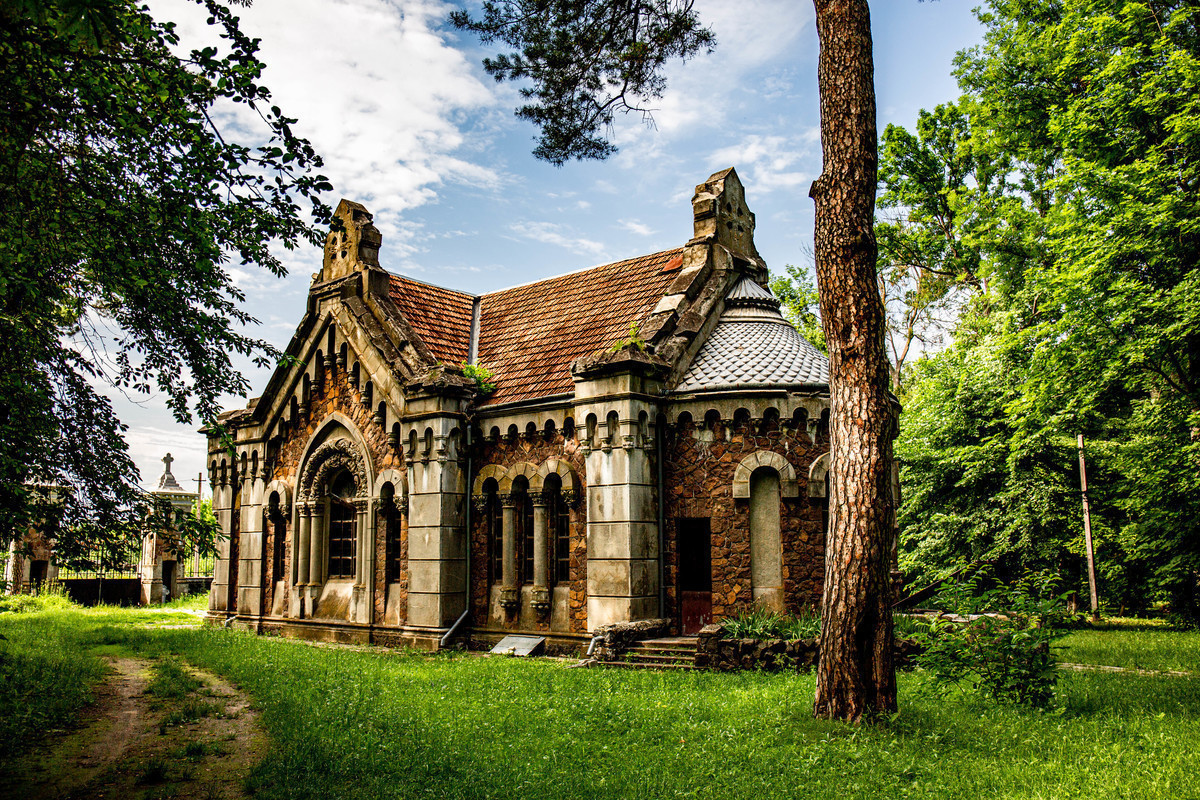 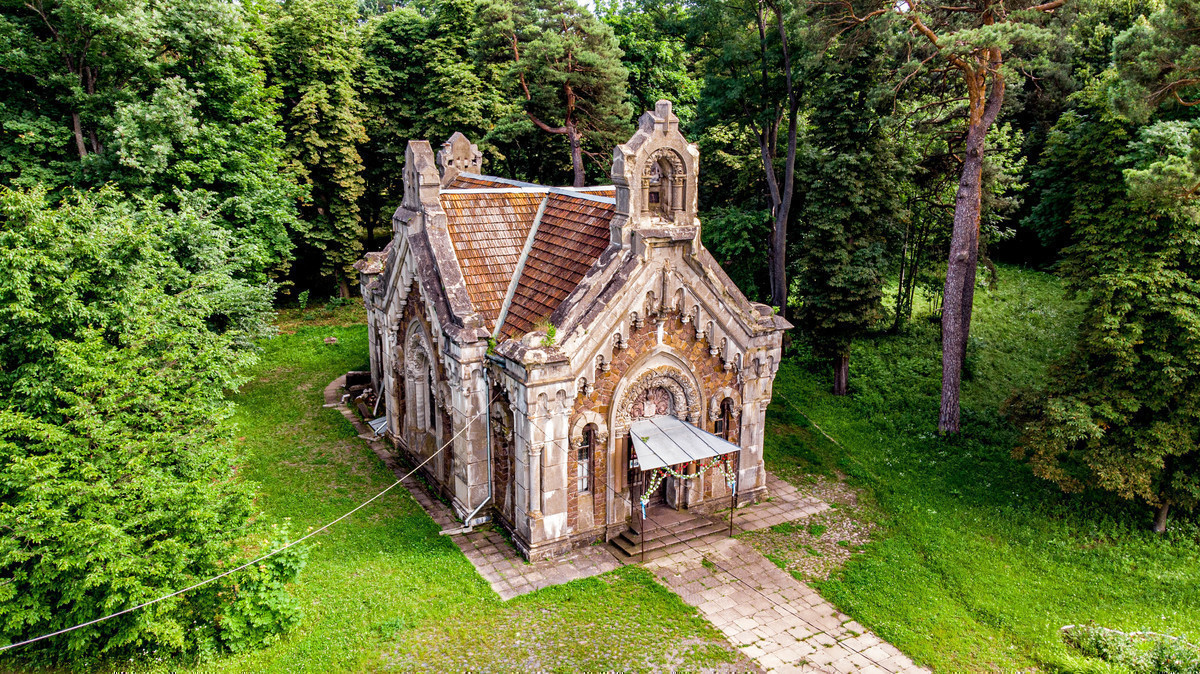 Then we went along the alley in search of a palace. Along the way, we come across an absolutely fearless lizard – she sits calmly and poses, while I was moving the lens to her at a distance of 10 centimeters)) 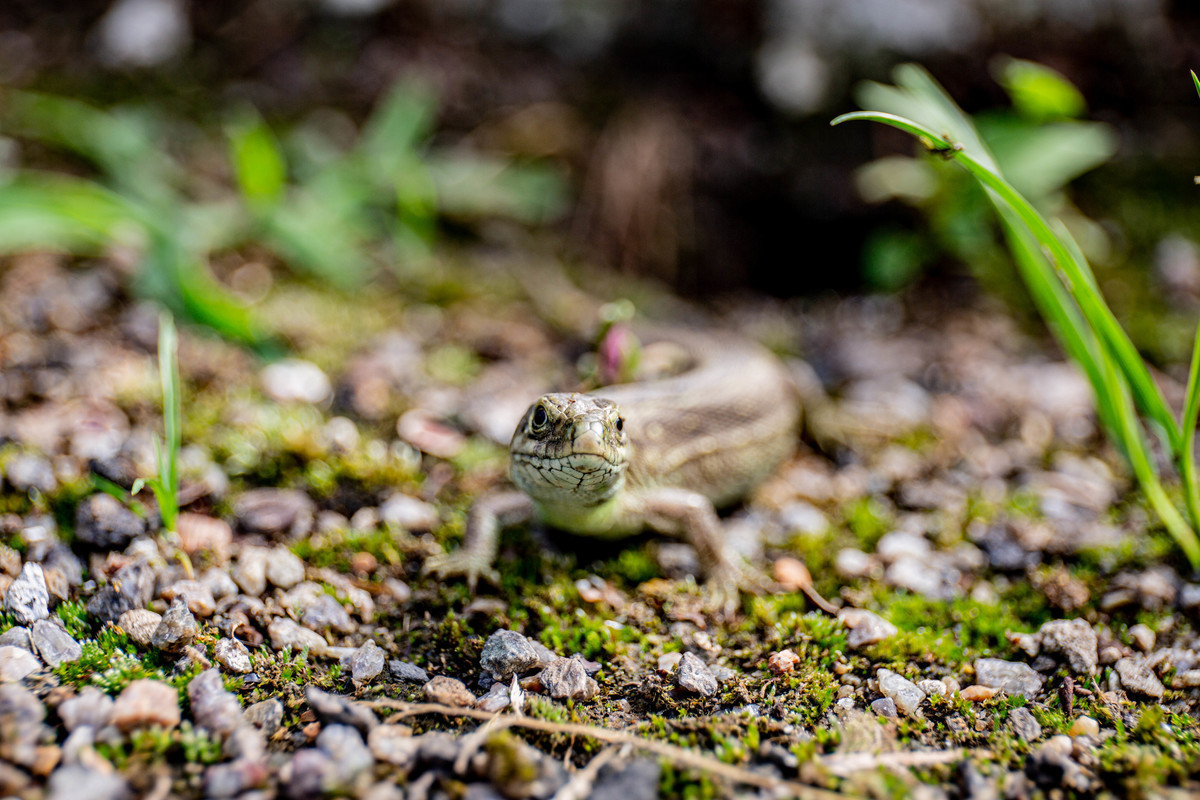 And then a building is revealed … and clearly on the place where the estate- palace should have been. 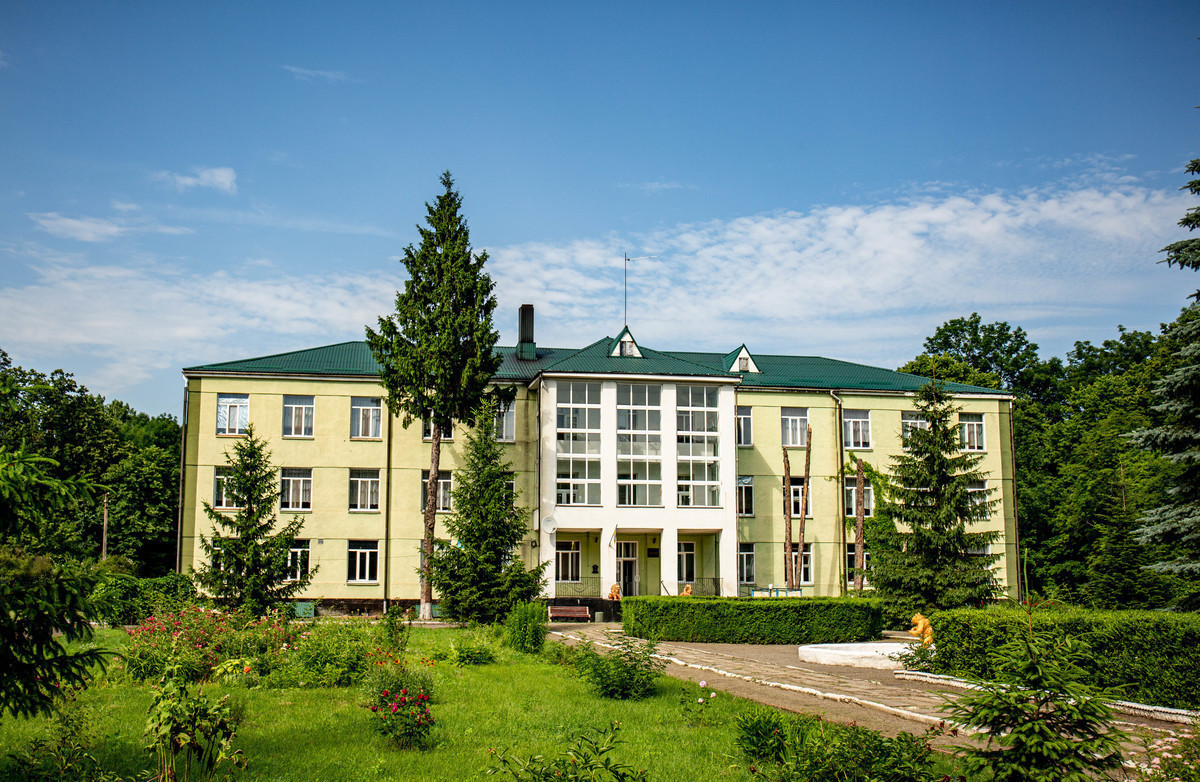 Sanatorium “Pechera”. Upon returning, I found out that the palace was dismantled (and they were not too lazy to do that!!) in 1920. And on its place they built this “happiness”. While we were sitting there impressed by that, a group of people passed by us, they were eager to share their joy with others. They began to tell us that there is a road to the river beyond the sanatorium – it is sooooo beautiful, there is a stone with moss in the shape of a heart there. It captivated the impressionable audience and they extremely strongly advised us to go and look at the stone with a heart. We went to the river. Past the destroyed statues on crumbling plates and skewed steps .. And could not find the stone – there are dozens of them and all with moss. On which of them people passed the Rorschach test – remained a mystery.
Sad and thoughtful from what we saw, we went back, and the same company of people joyfully rushed towards us and with fire in the eyes asked if we found the treasured heart made of moss.
On the reverse side of the building, that was forgotten to be and even washed rags of different colors hang on the balconies, streams of dirt on the walls .. wow! beauty!

We decided to spend the night in Gaysin – in the whole district (well, or in the direction of our next object), this turned out to be the only interesting place.
The hotel “Zdorovo”. Their cafe, TIR Repair shop are also located there. A very kind, cheerful and good-natured hostess. She offered us dinner – we chose, and she went to the cafe to cook)) Yes, she has an assistant, but she fussed with us all evening by herself. She asked us what we would like for breakfast and when to cook it. When we had dinner, she got into the car and drove to buy the food for our breakfast)) And by 9 a.m. a wonderful broth and something else (I don’t remember what we ordered there) was ready. The food, although quite simple, was fresh, hot and tasty))) The only thing is that the walls between the rooms are very thin. At night, some truckers settled in and it was perfectly audible what they were talking about in the room on the other side of the corridor.. But in general – wonderful, although simple))