This year we’ve repeated our trip to or Kamenetz-Podolsky to Retrofest. And even in the same way – we’ve helped organize and conducted a retro rally during the festival. There was a lot of work, the sun burned mercilessly, slept and ate in fragments. But so, in any organizational activity)))
Anyway, I realized that I happily walk through the old and not so old streets of Kamenetz, watching the sunset from the wall near the fortress and sit on a bench with ice cream in the shadow of the cathedral.

And now a little prose with a fly in the ointment. By some coincidence, our team first tried to check into the “Fortetsya” Hotel in Khotyn. After 1000 kilometers of the road, we bumped into an old, decrepit and sultry flophouse. One of the most important points in terms of the hotel for us was the internet, but it was not there (as it turned out later, it is, but only at the reception and not now, because “yesterday the lightning hit and now there is absolutely no”) and mobile communication was absent for everyone there. Right under our feet, the young lady’s run with a rag mop was carried out, which added a stuffiness in the absence of normal ventilation. Once we asked where we can find at least mobile internets we were told to walk to the park near the “hotel” and search there … 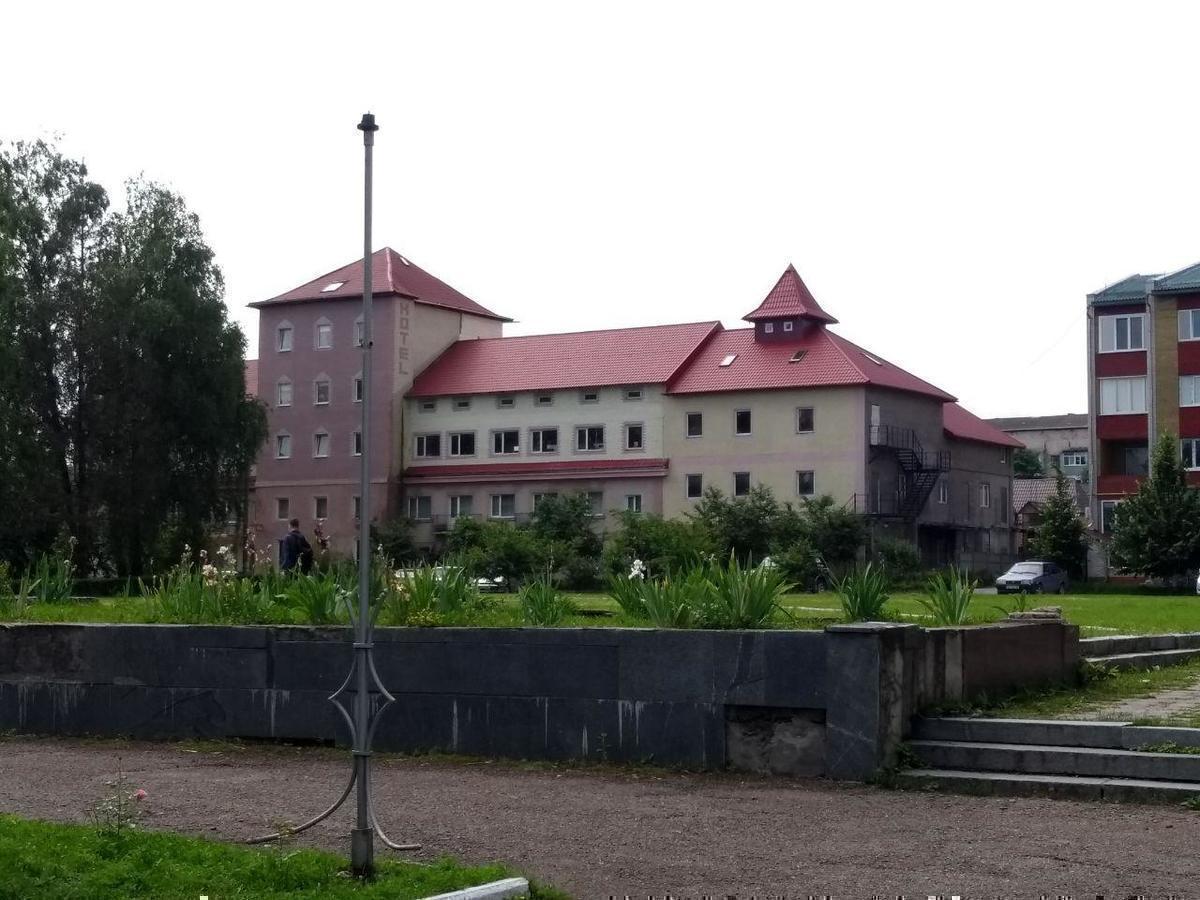 And it is not so bad outside))

On the question about the food.. ta-da .. we were sent to the market. “Buy bacon and brynza for yourself there.” We even went where we were sent. We will not emphasize on that after 1000 kilometers of the road and before active work, it would be desirable to just eat some hot food and to sleep a bit. Yes, we changing each other while driving, but this only partially alleviates the situation. And here we come to the market. Saplings, vegetables, fruits, household goods … we’ve found some bacon and brynza, turned around 180 degrees and went looking for some cafe / restaurant. The Google Map told us that there are several of them, but they were closed till 11 o’clock. Finally, we found one burger/shawarma place, working from 9 am. The main thing is that the food is hot, although fast food … Angry and tired, we disperse – who is to sleep, who is to wander. Since I slept from 11 pm to 4 am in the car (before and after sleeping was my driving shift), then I was able to afford not to go to bed right then. Therefore, I went exploring. And I was not the only one))
We’ve reached the fortress using the google maps. First, a small parking lot with a cashier and souvenir trays. What pleased us was the placement of all the souvenirs in the parking lot – there is no one in the fortress itself (to be true, there are some inside the gate to the fortress’s territory). Only some water is sold, that it’s just wonderful with such a heat))
At the entrance to the fortress, there are girls with folk instruments and when tourists approach, they start very melodious songs)) 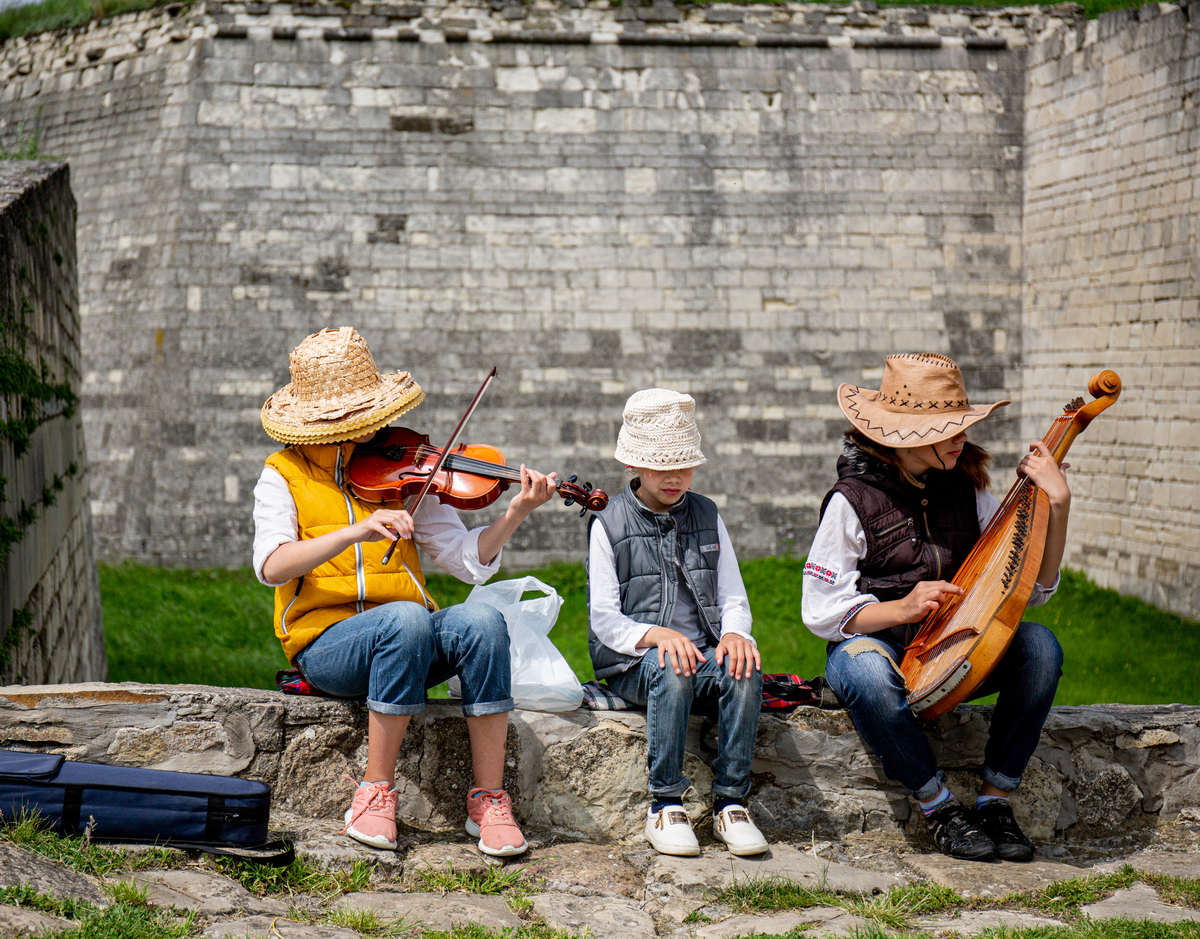 As for me, the Khotyn fortress is the most beautiful one I’ve ever seen in Ukraine. Moreover, it is the most well-groomed and hospitable. All the bastions are covered with a carpet of magnificent trimmed bright green grass, the paths are clean and well-groomed (bringing a steady association with the Wizard of Oz))): 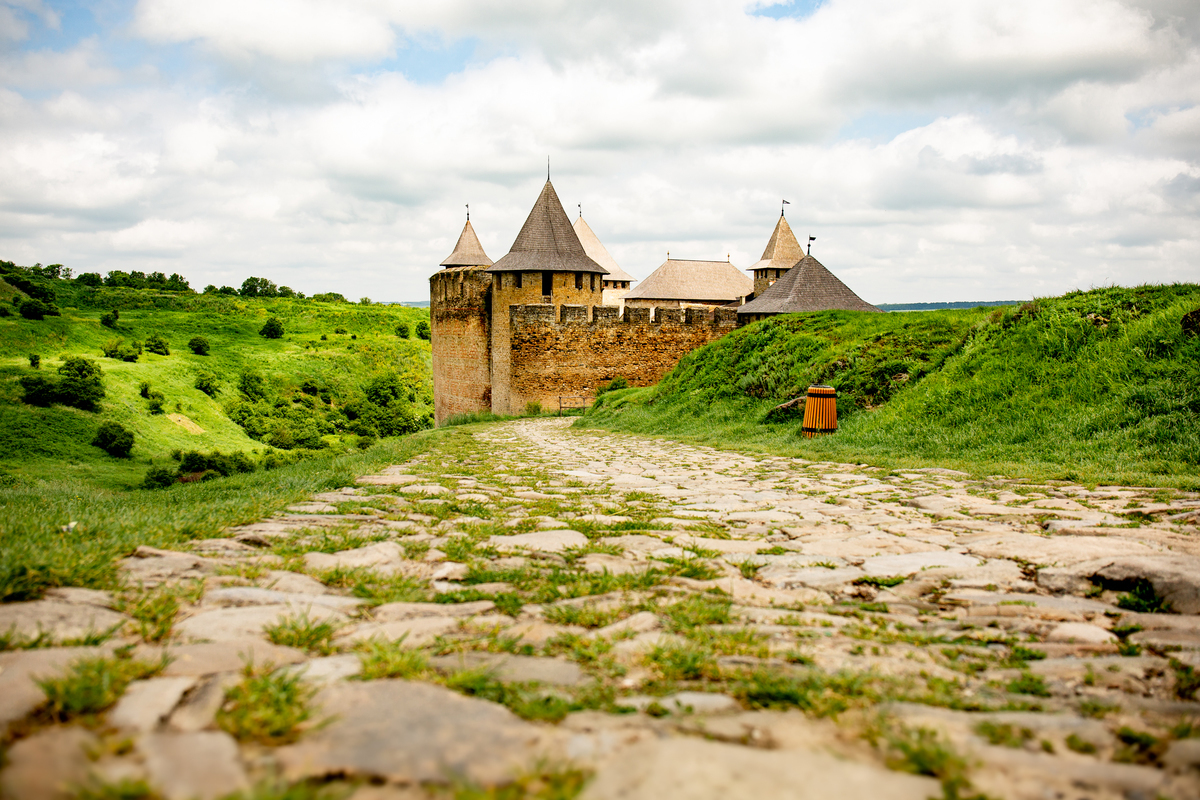 It was our second drone flight)) Of course, we were still not very good to fly smoothly and perform aerobatics, but we are learning!

Paid entrance is only to the central fortress. Remember, you can buy a ticket only at the entrance to the parking lot – it s far enough to return from the inner fortress to get it, so it is better to take it in advance)) 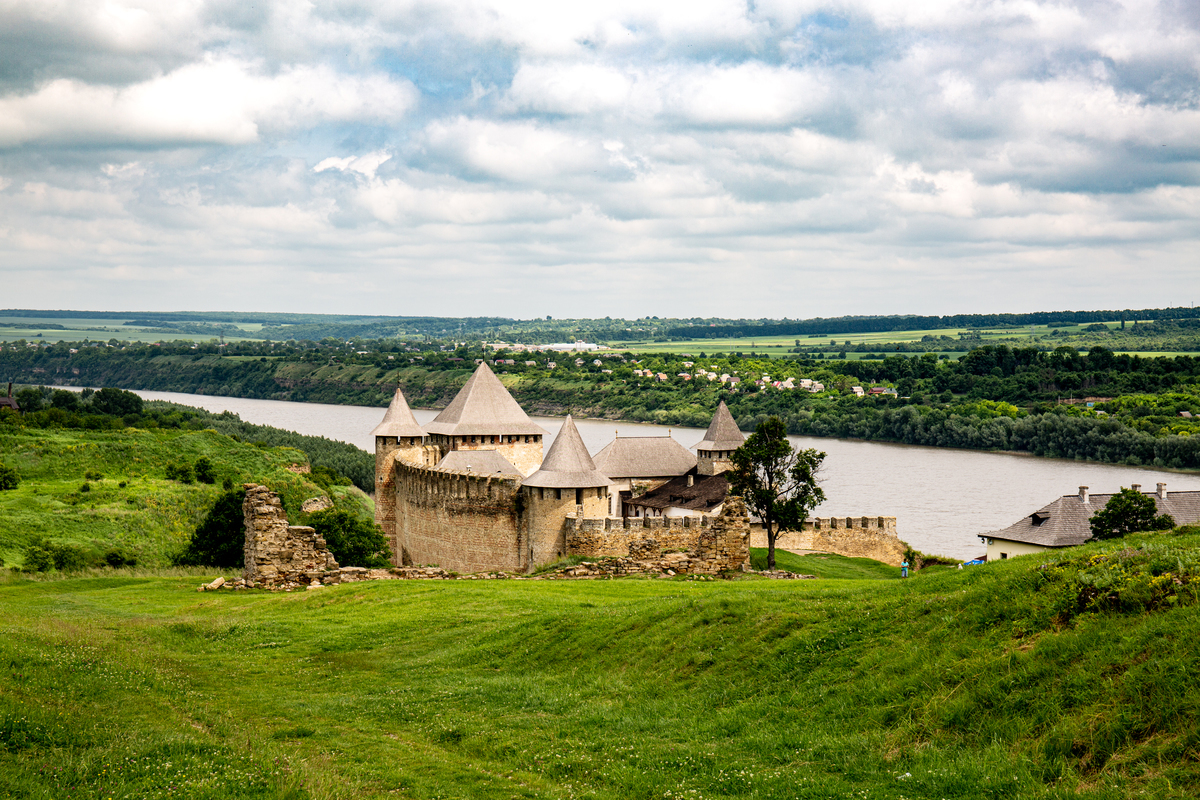 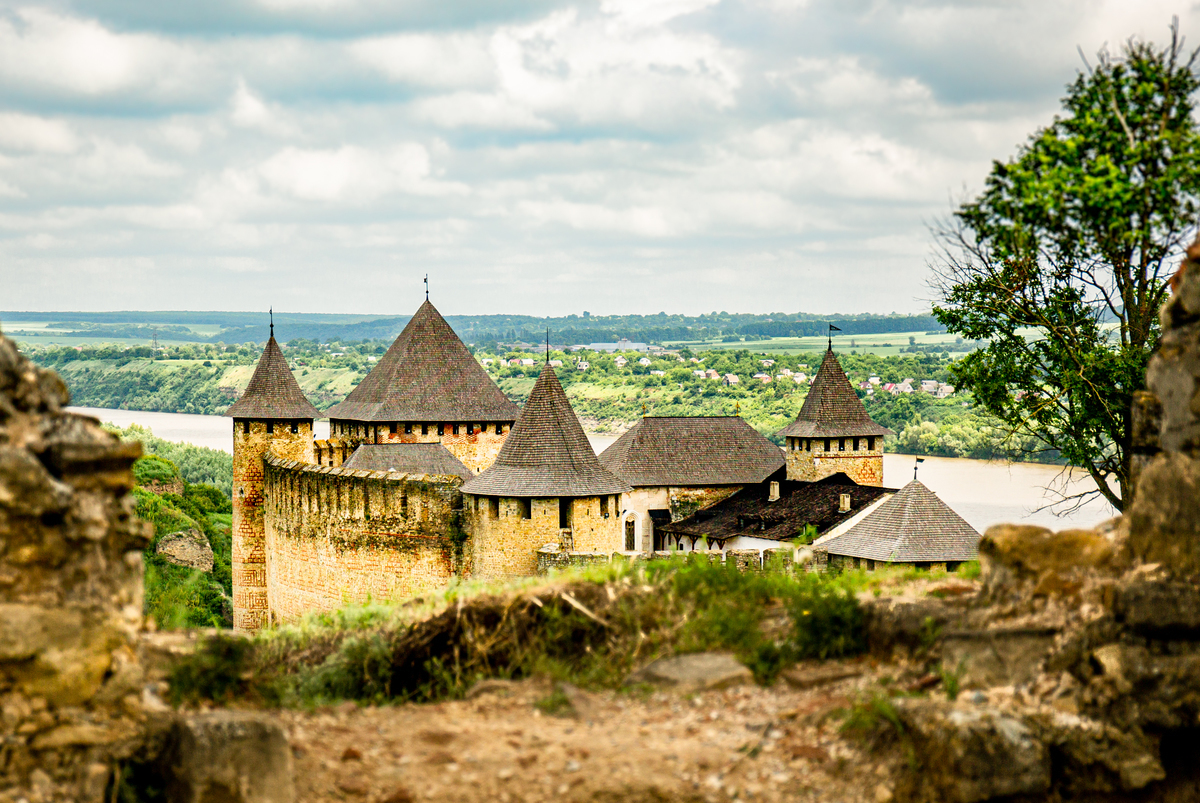 Inside the central fortress everything is very neat, clean and comfortable too)) 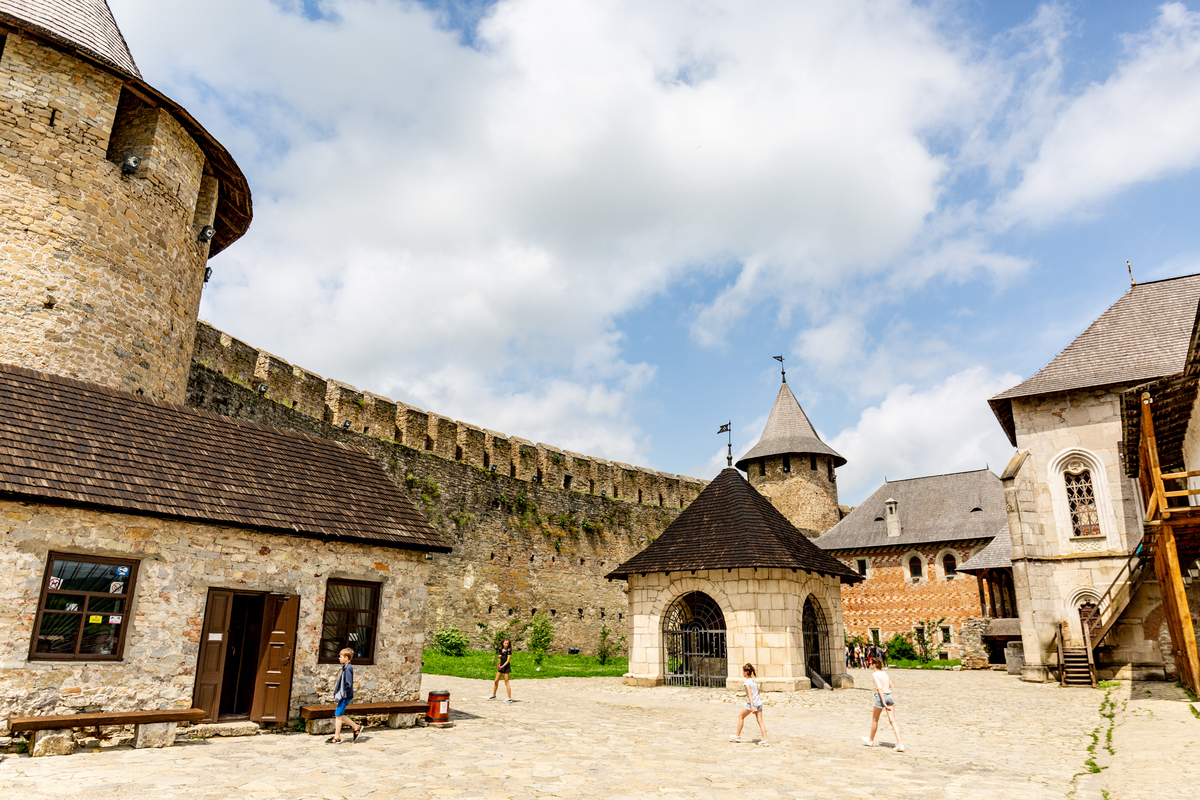 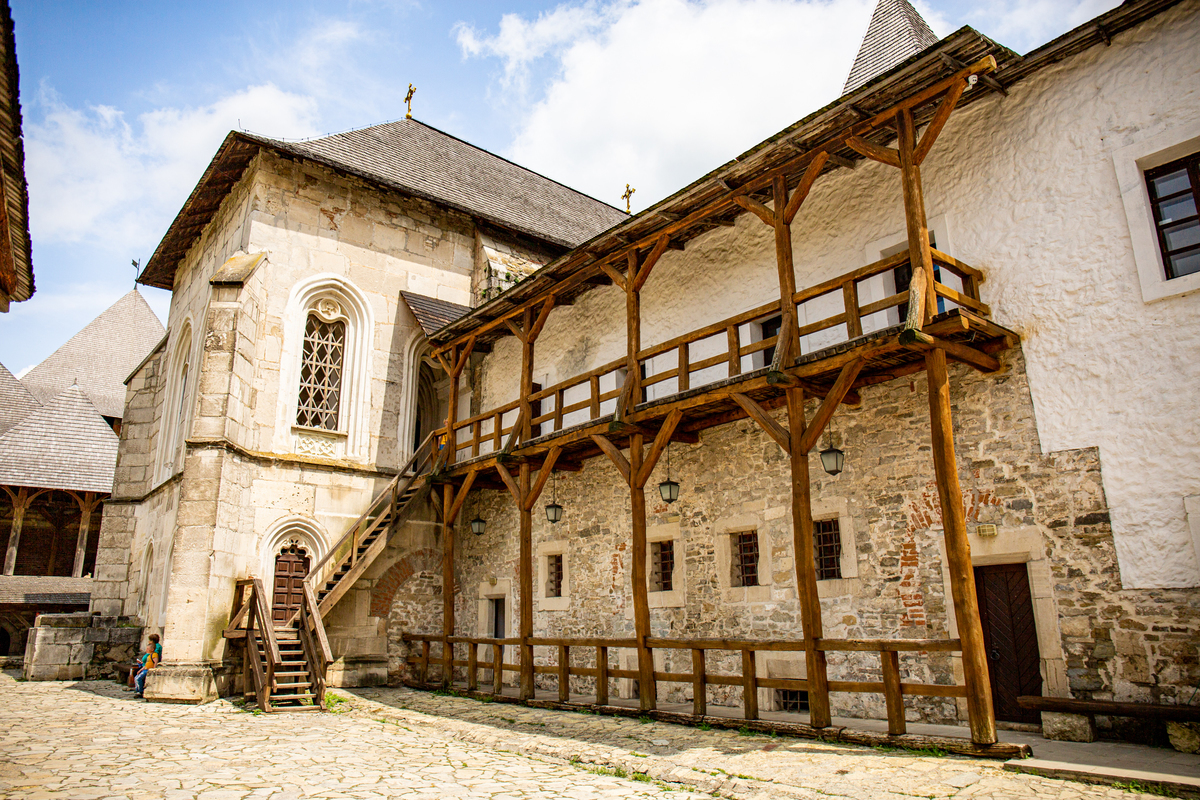 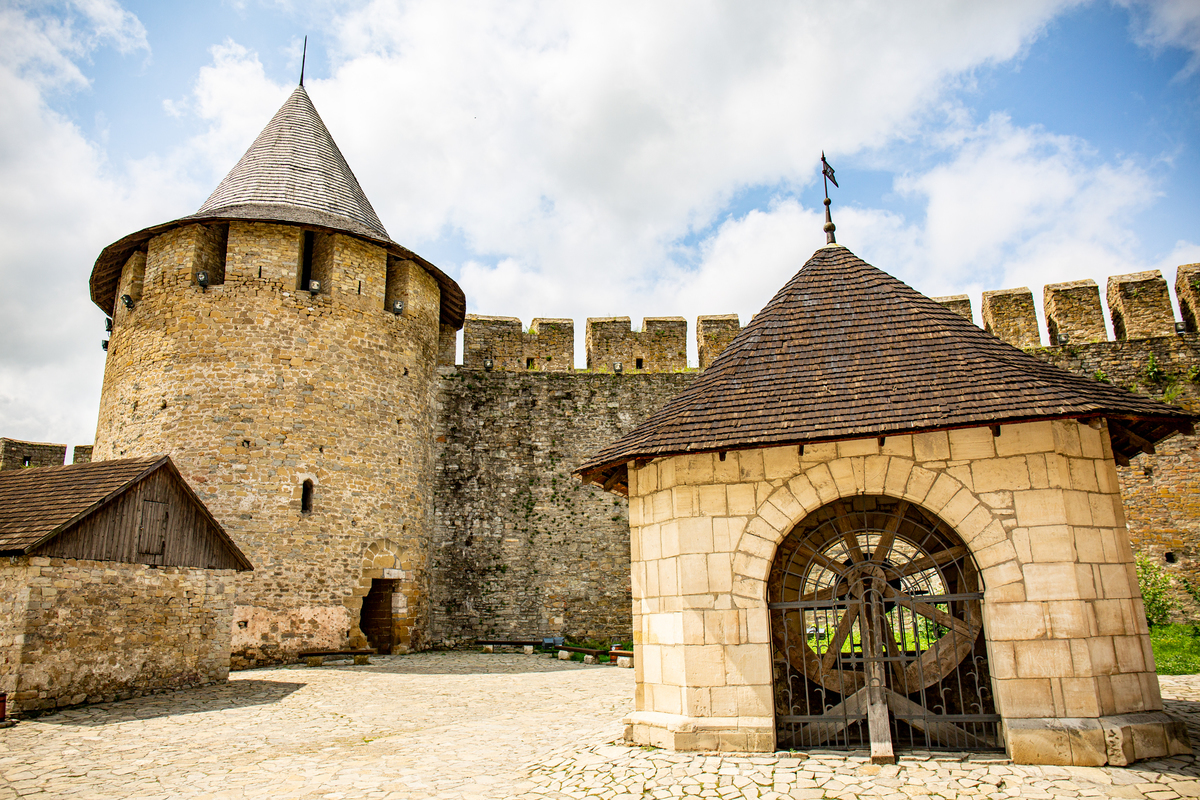 Having flown around everything that was possible, having shot and climbed around, we met with the sleeping ones and started to work on the rally. By evening, we settled in the same hotel where we lived last year – “7 days” in Kamenetz-Podolsky. On the one hand, it’s good for the whole team to live in one big room – the communication time is reduced. On the other – on the folding beds and without windows. It was a great surprise for all of us that it is almost impossible to sleep and wake up normally without natural light. And especially if you are tired, like a horse after a race.
A separate oddity was the behavior of the staff in the “Terrace” restaurant, which is located on the first floor of the hotel. Last year we had a wonderful dinner there after our hard labors. This year, after two dinners we were no longer served there. Well, I could understand if we had a rowdy there. If we would have yelled drunk, danced on the tables, insulted someone, or I don’t know what else. But no, we’ve just came, ate, paid, said thank you and went sleeping … We arrived at 9 o’clock in the evening (the kitchen closes at 11), and we are told that they will not serve us. We were not able to get a clear answer to the question “why?” from the beginning. And in the end – “we have a lot of orders and we cannot serve you.” The restaurant had 2 tables occupied. Maybe I don’t understand something? Next day – the same. Then the girl waiter, who saw is, immediately ran away and called the administrator. From which we heard exactly the same. They are busy. Okay. We’ve found the place to eat. And the chef in “Terrace” has changed, judging by the quality of the food. But that was unpleasant…

After the end of the festival, we went for a walk around Kamenetz. For all the same places that were in last year. 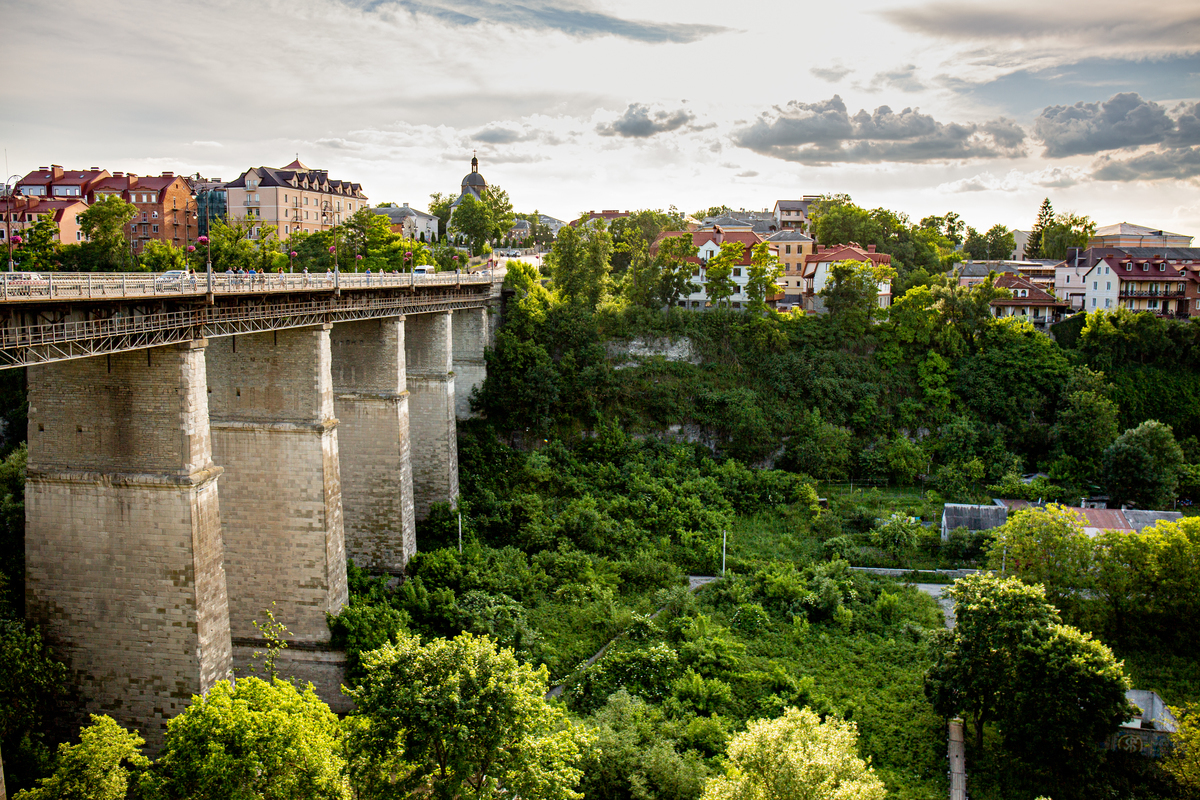 At first – Novoplanovsky Bridge, near which very tasty ice cream is still sold. We flew from the bridge, got a little scared (for some reason, the Gonchar Tower creates noticeable interference and the quad starts losing the signal)). By the way, those huge strange pipes hanging under the bridge … disappeared.

Next – the Church of the Most Holy Trinity, in which nothing has changed)) Then – the Cathedral of the Holy Apostles Peter and Paul, which was closed.There is an observation deck near it – closer to the river. From it you can clearly see the St. George Church. 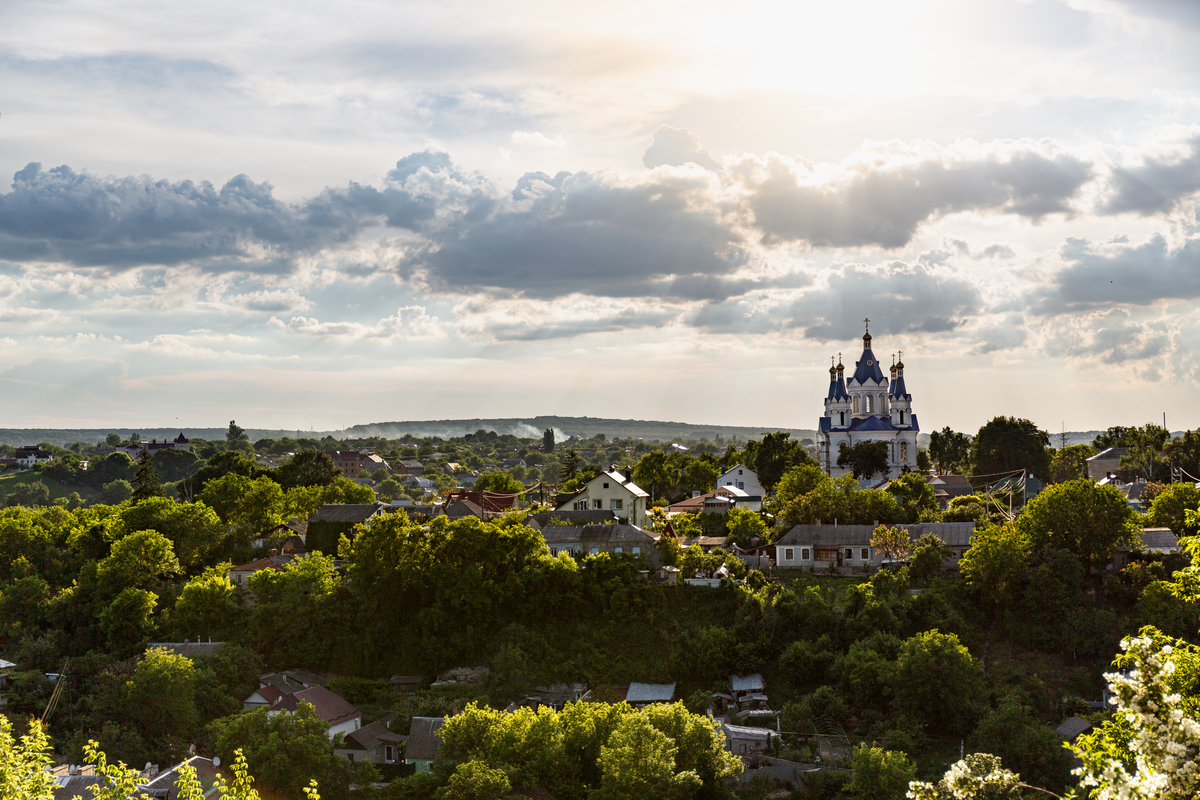 From there – back to the square to the town hall, to have some Georgian food. And then – past the Dominican Monastery of St. Nicholas to the Castle Bridge. 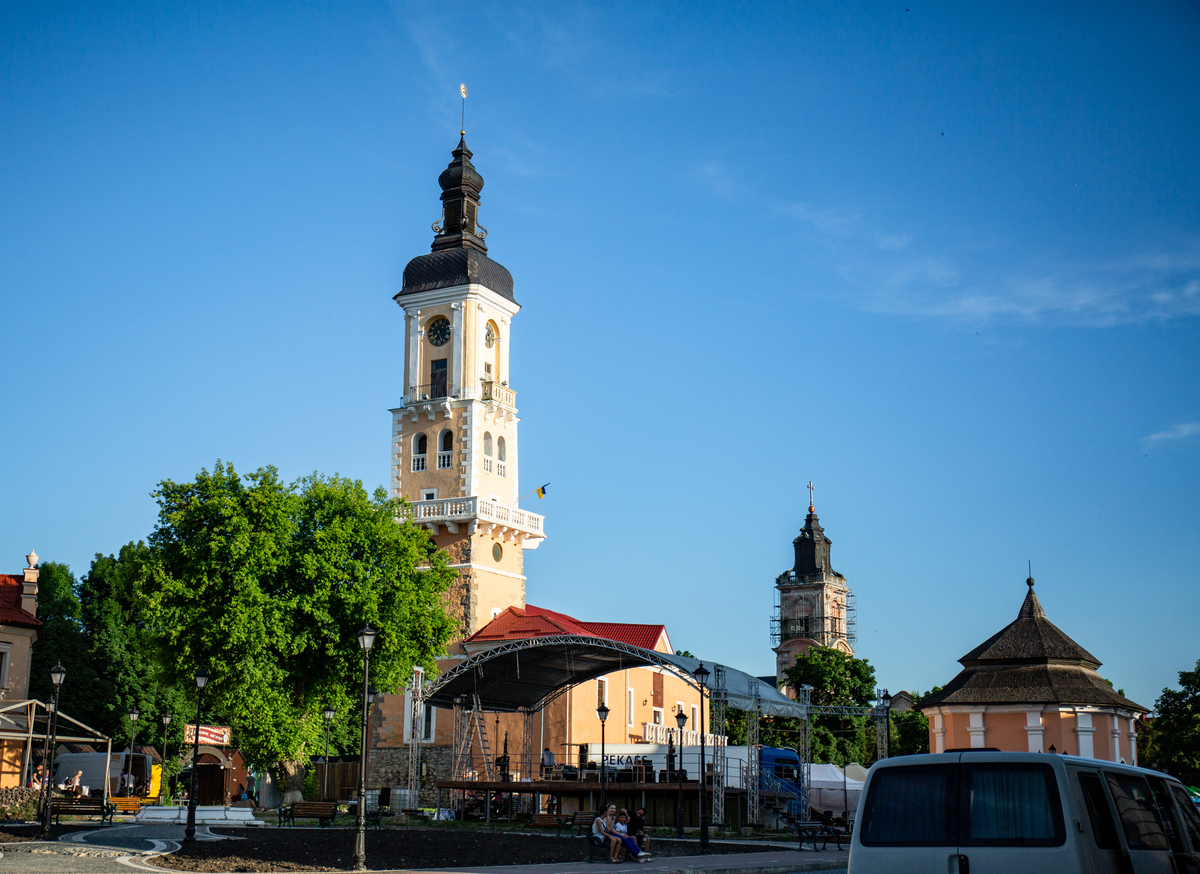 To my great surprise, the moment with not a single person was in the frame came! 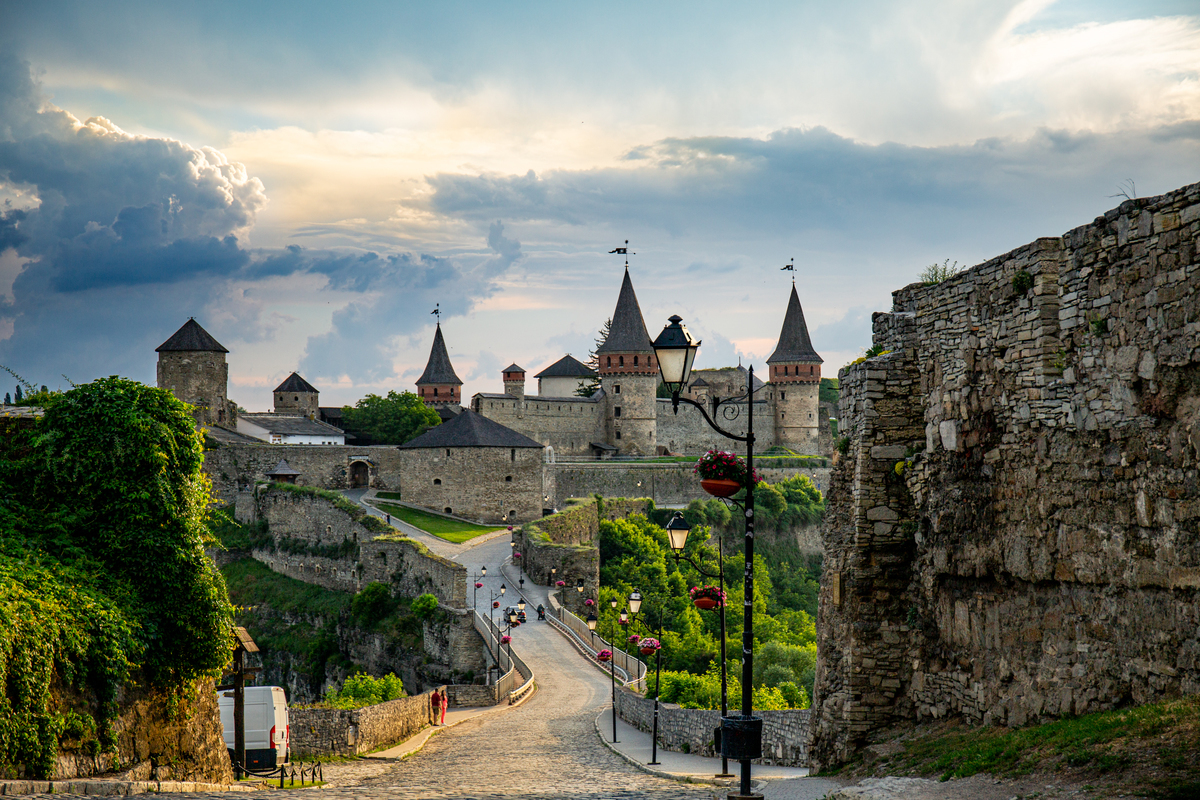 This is the City Gate. More precisely, I stood between them and the Armenian bastion.
And from there we went to the observation deck at the gate. Climbed on the wall and waited. 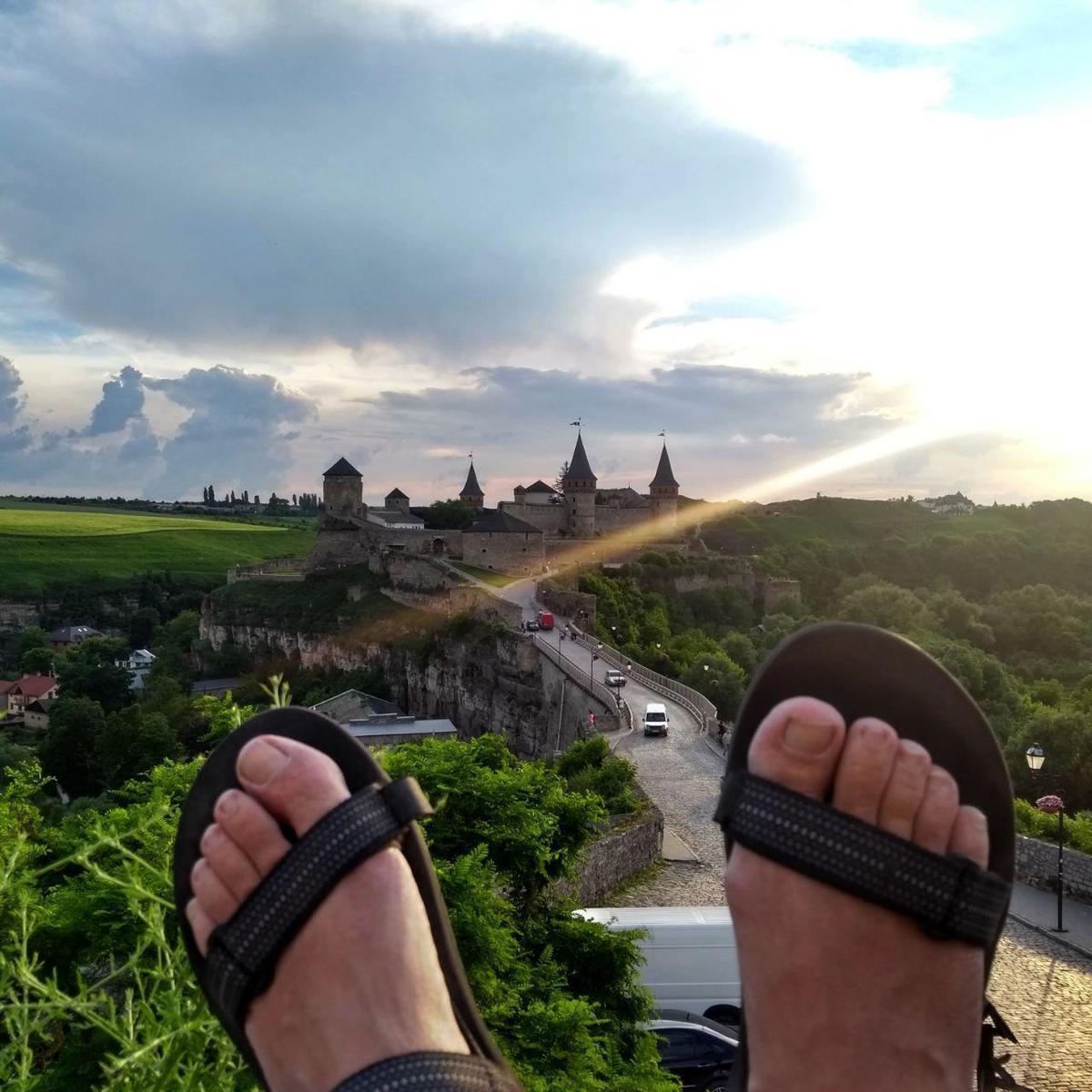 In addition to a good relaxed conversation, the goal was to wait for darkness in order to photograph the Kamenetz-Podolsky fortress with backlight. But even before dark there were a lot of beautiful things! 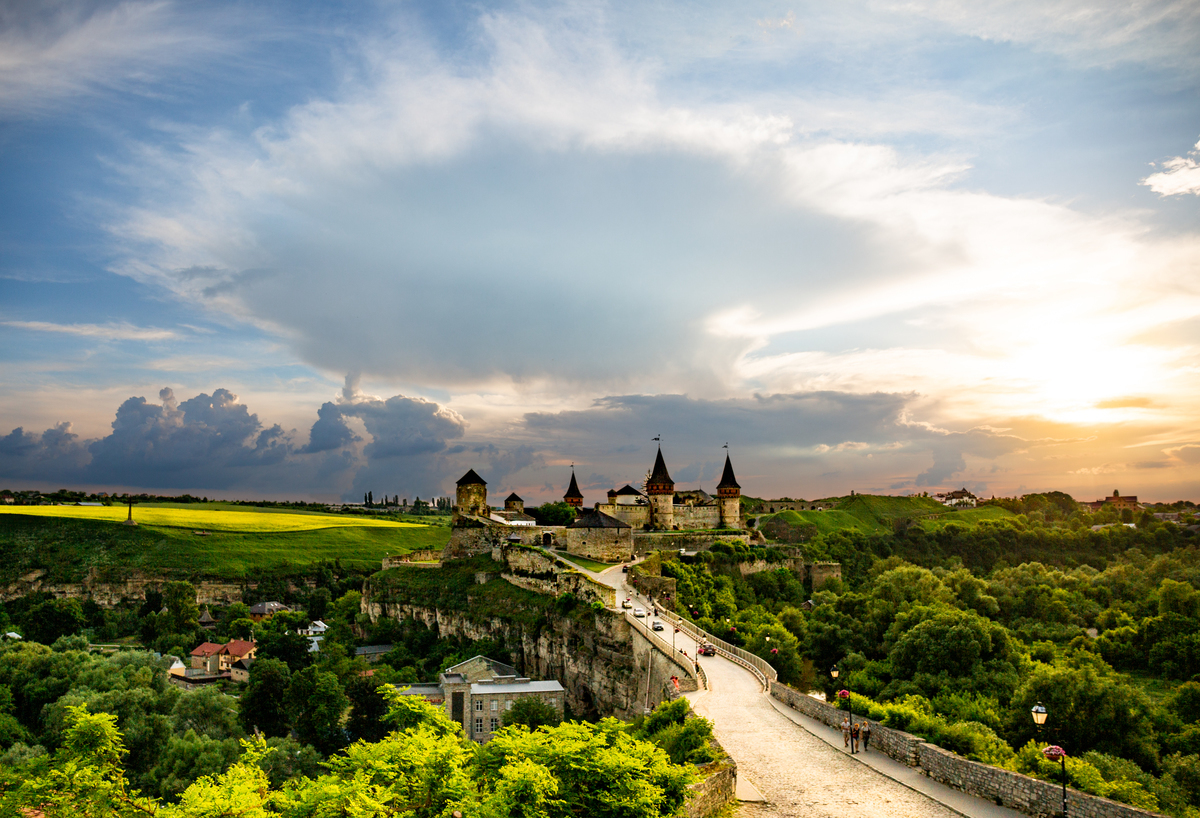 Well, for good reason we’ve came there so early. After 20 minutes, the walls of the observation deck began to fill with people who were also waiting for darkness (and photographers as well). As a result, we sat there for about three hours, and I heard enough about the fact that photographers are worse than snipers))) 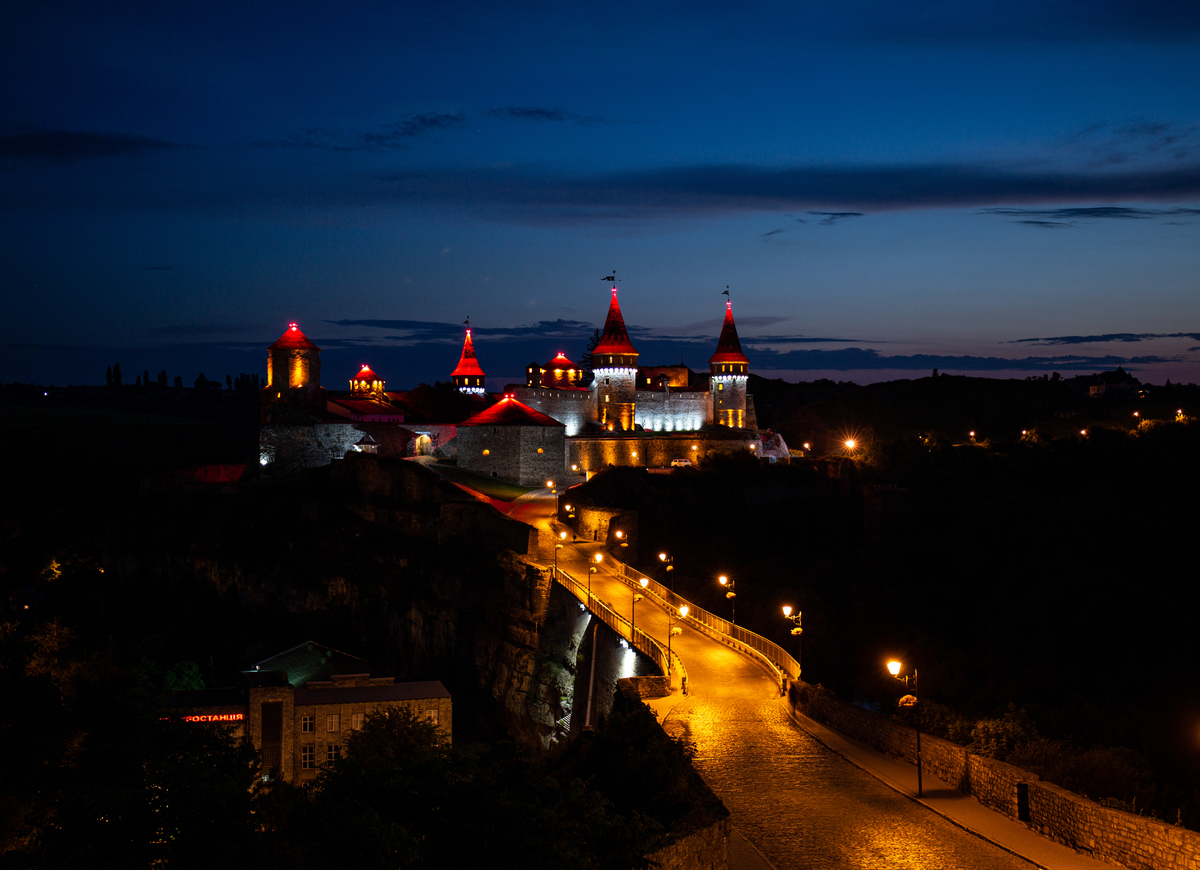 That night we stayed in Kamenetz, and the next day we went on a journey in search of old mills. Previously, I spent a lot of time looking for information about them, but along the way it turned out that not all of them exists in the information field. But … let’s tell in order.

First, we had to see the missed things))) Well, that is, everyone who did not check the fortresses of Khotyn and Kamyanets inspected them. During the same time, we flew a little and filmed. 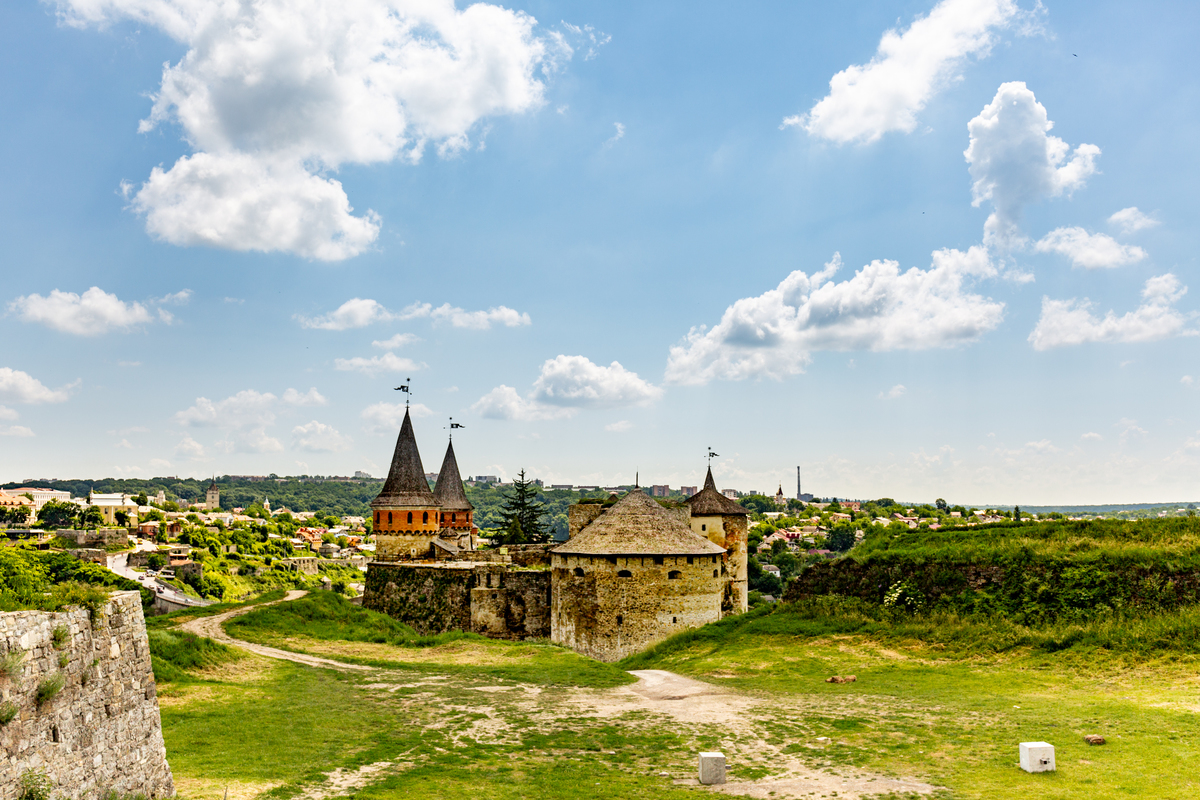 And personally, I had a mandatory program – while we were driving from Kamenetz to Khotyn and back on rally matters, I spotted two fields of cereal (I think it was barley, but I’m not sure) that grow with the flowering wild poppies. Last year I didn’t take a photo of this beauty, that I was extremely sorry about. But I’ve remembered that place. 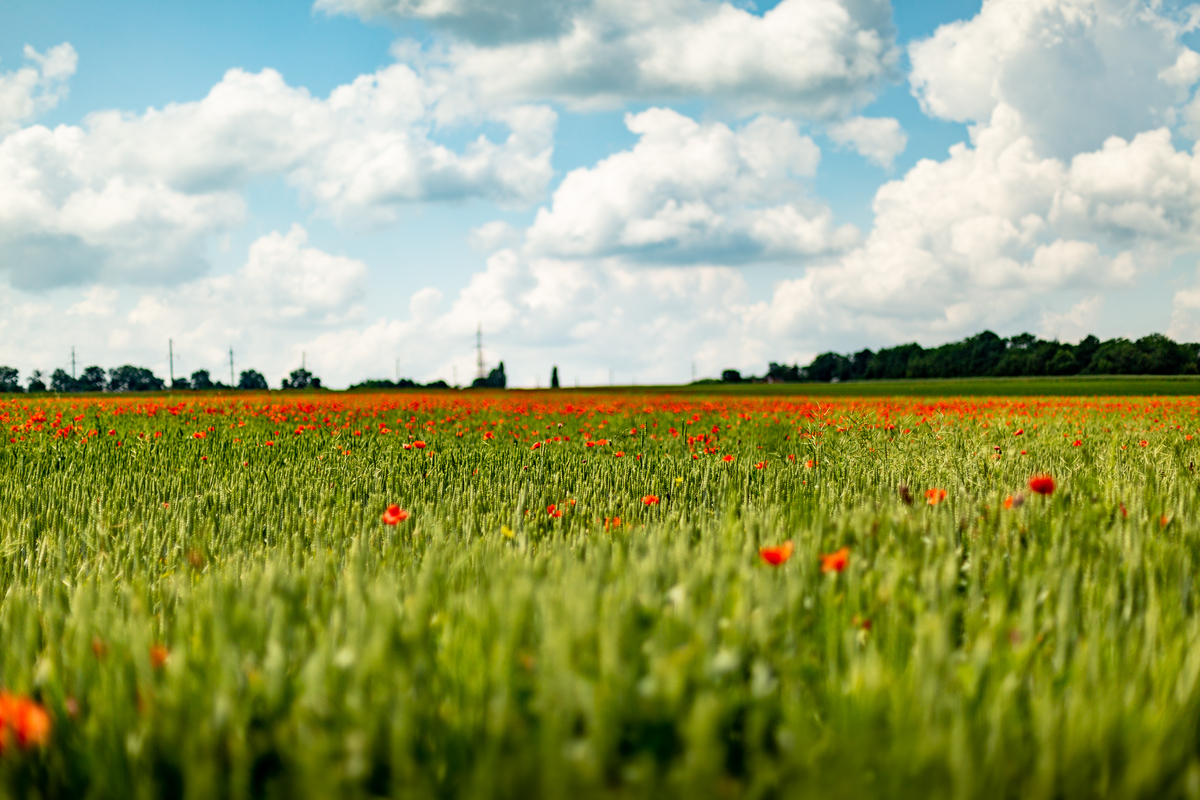 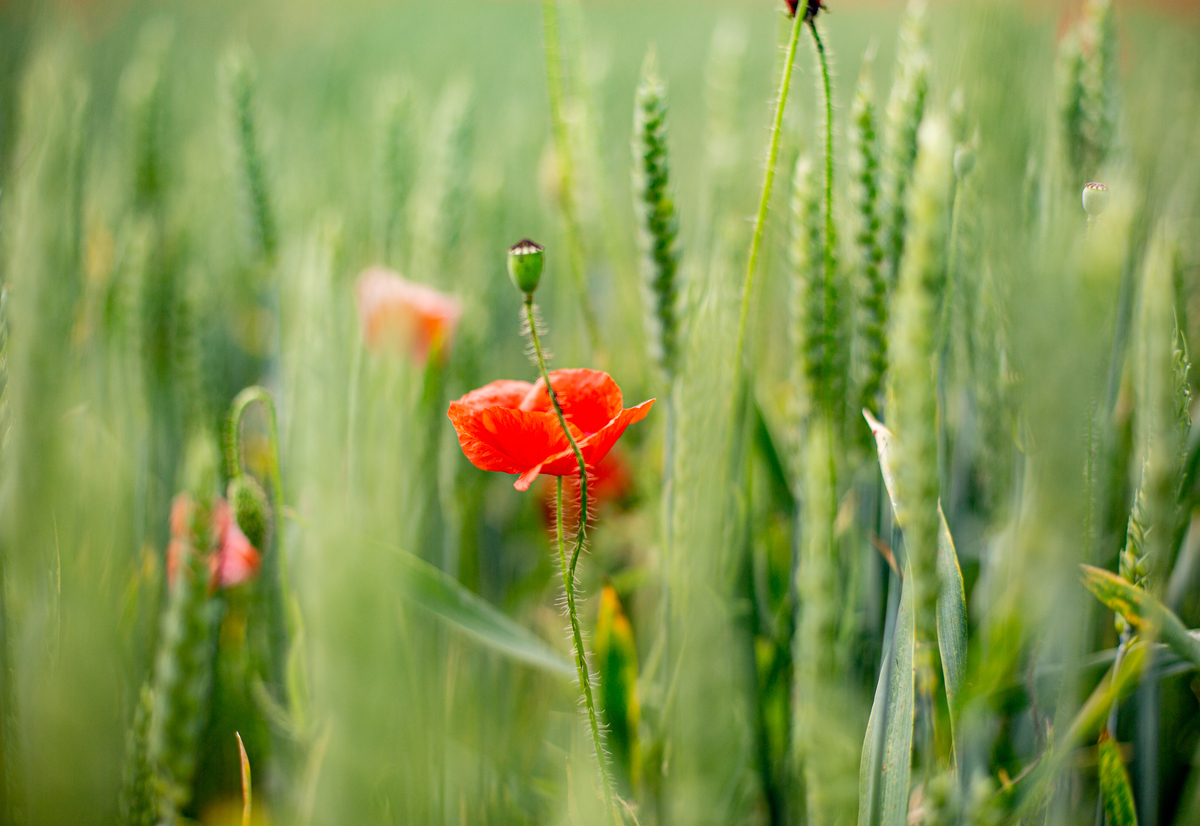 The next item (well, or the first in our search for mills))) was Medzhybizh. But this is the next story)))