Exploring the reserved areas of the south of Ukraine. Third part – emotional. 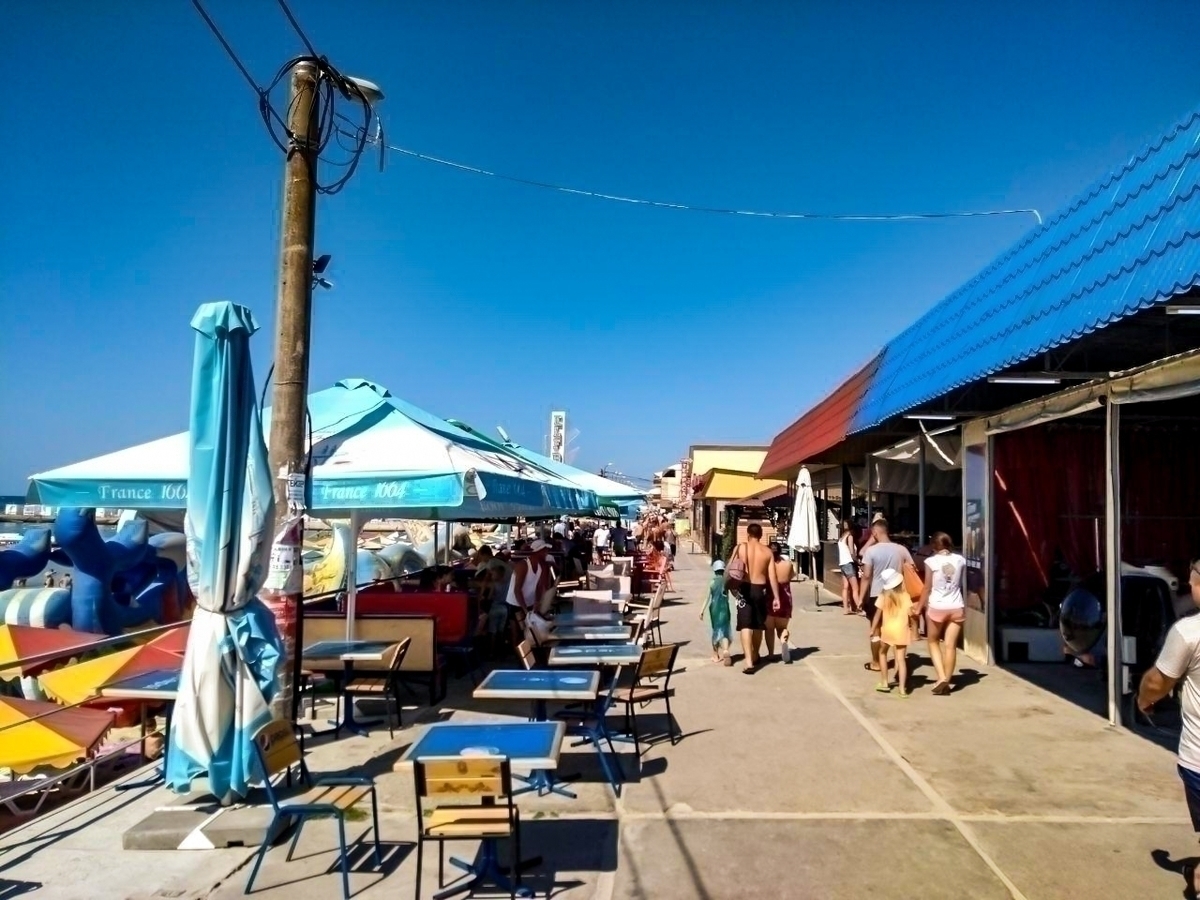 This is how it looks in the light of day.

We pass a few tens of meters and dive into a relatively spacious and clean establishment. We found a table, sat and felt ourselves a little out of place – weather-beaten people in T-shirts, shorts and sandals, as opposed to almost starched collars (people are obviously dressed smartly to eat pizza at the beach zege-bar). We look around, the audience contemptuously glances at us .. Well, okay. Food turns out to be average in price and quality – after the impressions already received, we were afraid of a critical expansion of the price – quality parameters.
We were going back when it is already dark – there are no lanterns on the streets.
Morning. Coffee and discussion plans. First of all, that we will not stay here longer than necessary. We decide to go to breakfast and at the same time find out what about the boats to the Dzharylgach and Kinburn Spit. Well, the first point was implemented without much difficulty, although the kitchens in those cafes on the embankment starts to work on a full power starting from 6 p.m. (the main contingent was coming to light approximately in that time), but the second point was a problem. 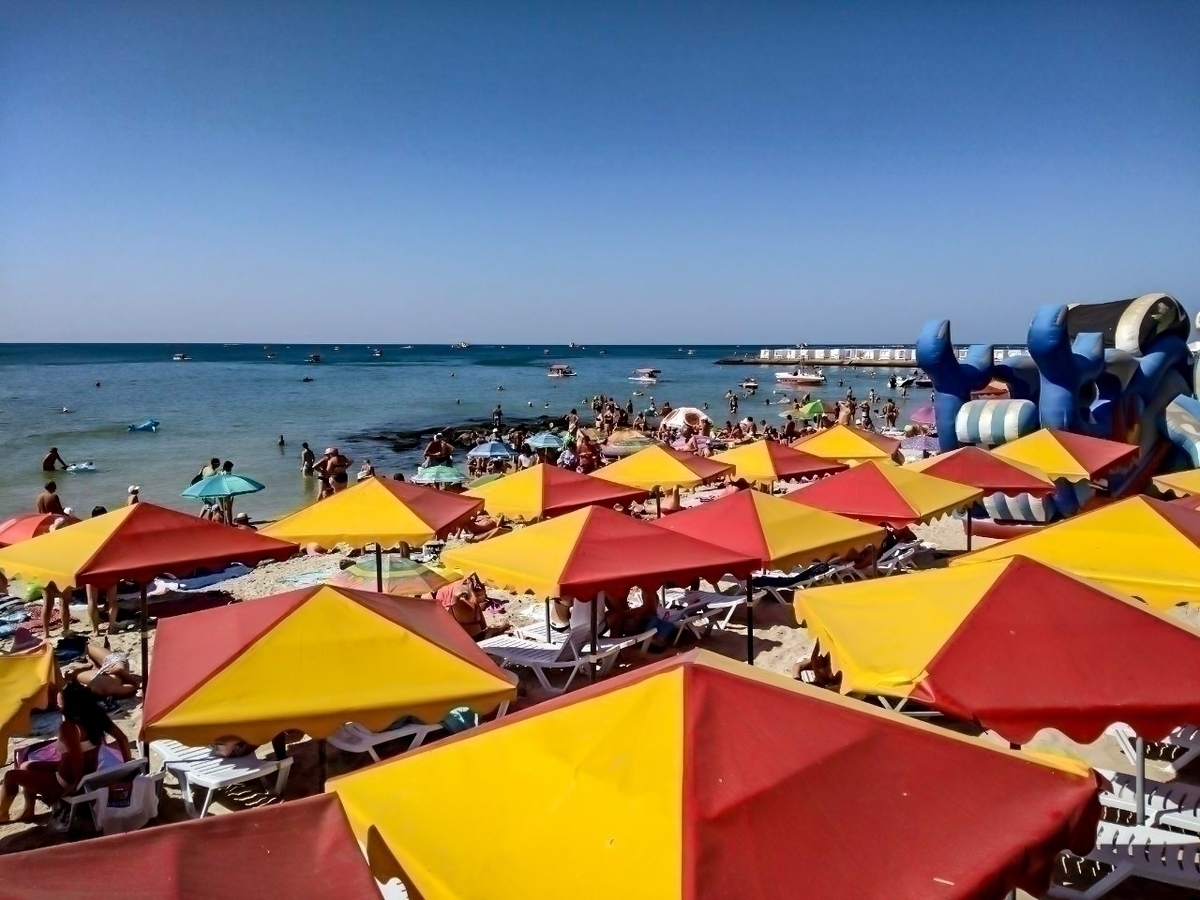 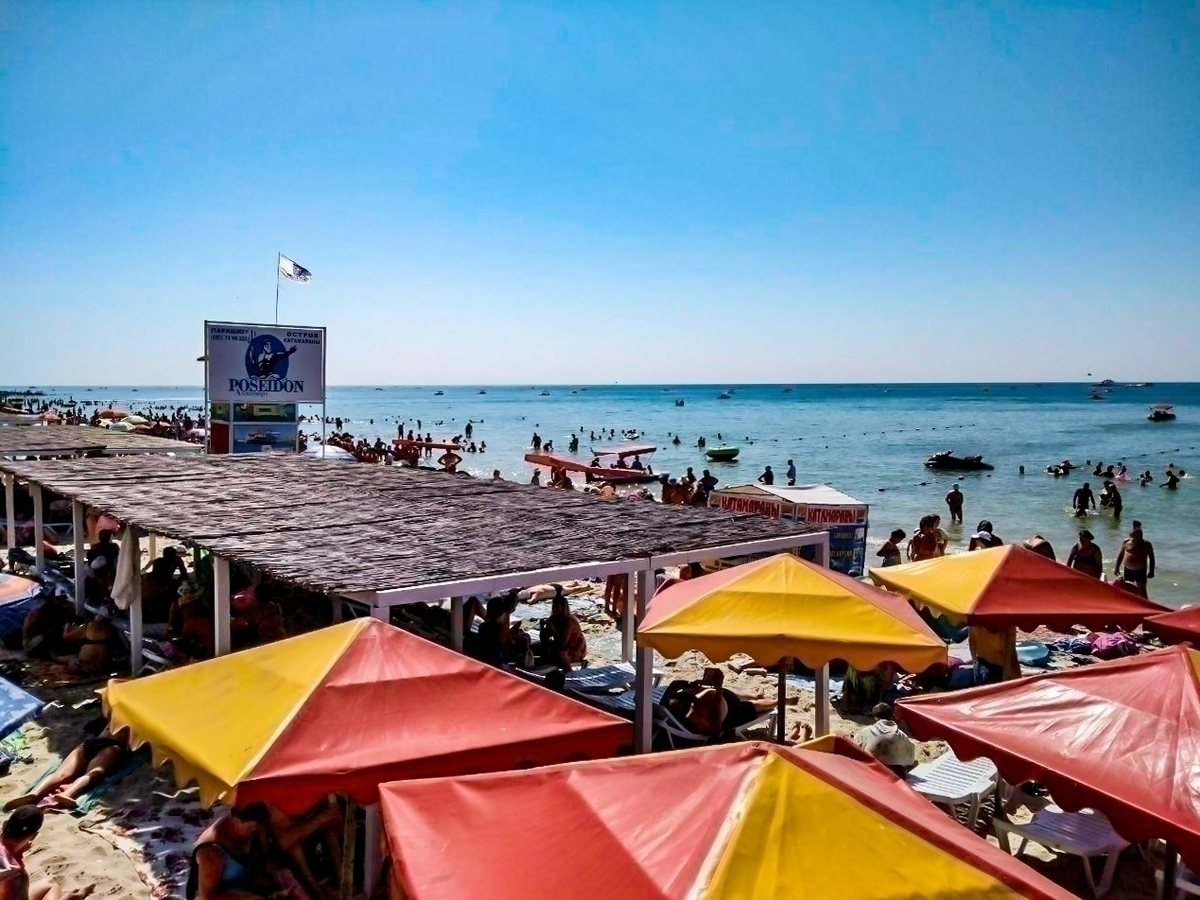 A strange thing – there are a lot of people in the photos, but after visiting this place in the evening, it seemed empty in the morning.

So, we were interested in the booth with the inscription “Excursions” to find the boat. Come, ask – what about Dzharylgach? They said – come tomorrow at 8 am – Ikarus bus will pick you up, then 3 hours in it, then a boat, then walk around the island and back in the reverse order .. Ooookaaaay. What about the Kinburn Spit? Answer: “What is this?” Thank you, bye. We’ve found a store, stock up with drinking water, decided to go to Odessa. We have many friends there, there are tourist shops – more hope for repair/rental/lending of the tent.
We went to Zhelezniy Port for the reason that it was written in the network on forums and on advertising sites that you can get to the places that we wanted to see from here. It’s not a problem to go to Kinburn Spit by a car (such as ours), but it’s a big detour, at least two more days, searching for a guide in the Golaya Pristan or near and again the absence of a tent to stop at a campsite or just on the beach. And in one day it won’t work out – time and efforts consuming road. How to get to Dzharylgach was generally a mystery at that time and in that place. At this very moment, I’m, all upset, was writing on Facebook about my impressions of the Zhelezniy Port and about the frustration with the way to Dzharylgach. When we have already traveled about 60 km towards Odessa, my friend wrote to me – go to Skadovsk, there, on such and such street, turn right … ta-dam, and you will get to the second pier. There are boats to Dzharylgach from there. Thank you buddy!!! U-turn, and – to Skadovsk. 150 km detour, but at the same time a real opportunity to get to one of the planned places)))
Entering Skadovsk, we were discussing the brightest contrast with the Zhelezniy Port. Wide streets, parks, few people – and everyone walks calmly (maximum quickly walks on their business). Quiet provincial seaside town. We’ve found the pier we need, then its caretaker. We shake out the cost of the trip to Dzharylgach “round trip with a wait”. A person hesitates for a long time, saying that it is expensive for a group of less than 10 people. But assertiveness and patience won)) The caretaker called the free captain and after half an hour we got on a boat and moved to the island. At that moment it was already about 4 pm and there was not much time left. We left all things in the car – we did not dare to try to spend the night on the island, not knowing what conditions and opportunities were there. And we could have taken a chance. But on the other hand, we know for the future that it’s not just possible, but it’s very worthwhile to go to Dzharylgach for a few days to relax)))
So, we have about 4 hours with a time for a boat trip – then the captain needs to be on his place on the pier, since that is the border zone and you cannot be on the water even after 19:30. We approached the island in the bay “Glubokaya” (Deep). I don’t know – is this a joke or is it the deepest one))) The pier is simply impressive – a few boards on wooden stilts)) 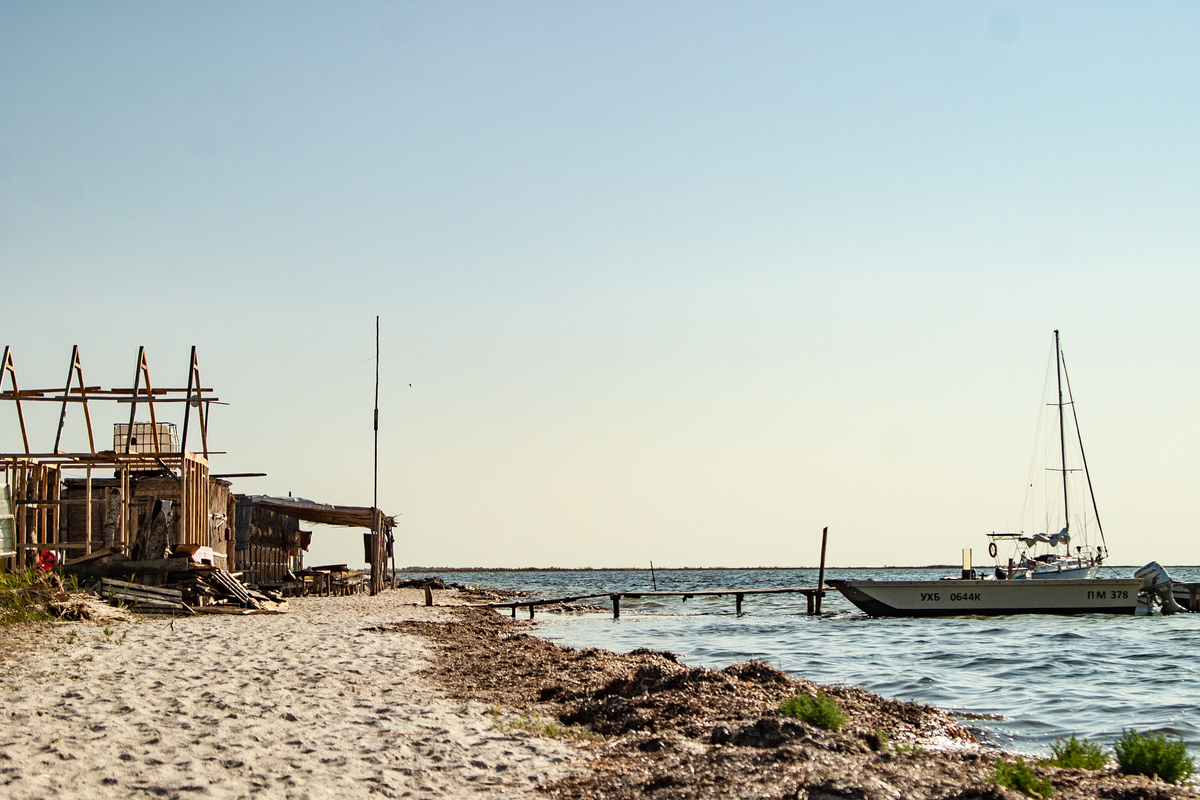 Walking along the shore – the sandy beach on which the base is located – not the base .. well, let’s say, such a place for relaxation. It is called “At Gavrilovich”. Along the surf line there are reed canopies, umbrellas, deck chairs. Behind them is a row of bungalows – stilt houses covered with reeds. There are sports fields, a point with water/beer, there are places to eat, electricity and a Wi-Fi point. Few people – almost silence. The whole place is 100 meters long and 20 meters wide. And around this cozy place is a bare steppe. Paradise for misanthrope))) well, or a very tired person.
While we wander along the shore, thinking where to go further, we come across a stern tanned man (a classic character from stories such as Jack London’s). He looks at us and says “Oh! Newcomers! The sea is there! ”, Shows with his hand to the other side from the pier – to the steppe … and went further)) We’ve stopped from surprise, looked at the steppe and decided to go see what sea is there, if this isn’t)) Later I realized that the open sea instead of the bay was meant)) Leaving the recreation area, we see the standing ZIL, redone for excursions. They say, if you know the weather and the ebb and flow, you can drive to the island along the spit in such a very harsh prepared off-road car. But we have a little time and somewhere “there” the sea.

The road towards the “sea” is rolled up by this very ZIL – loose sand, sometimes ankle-deep. 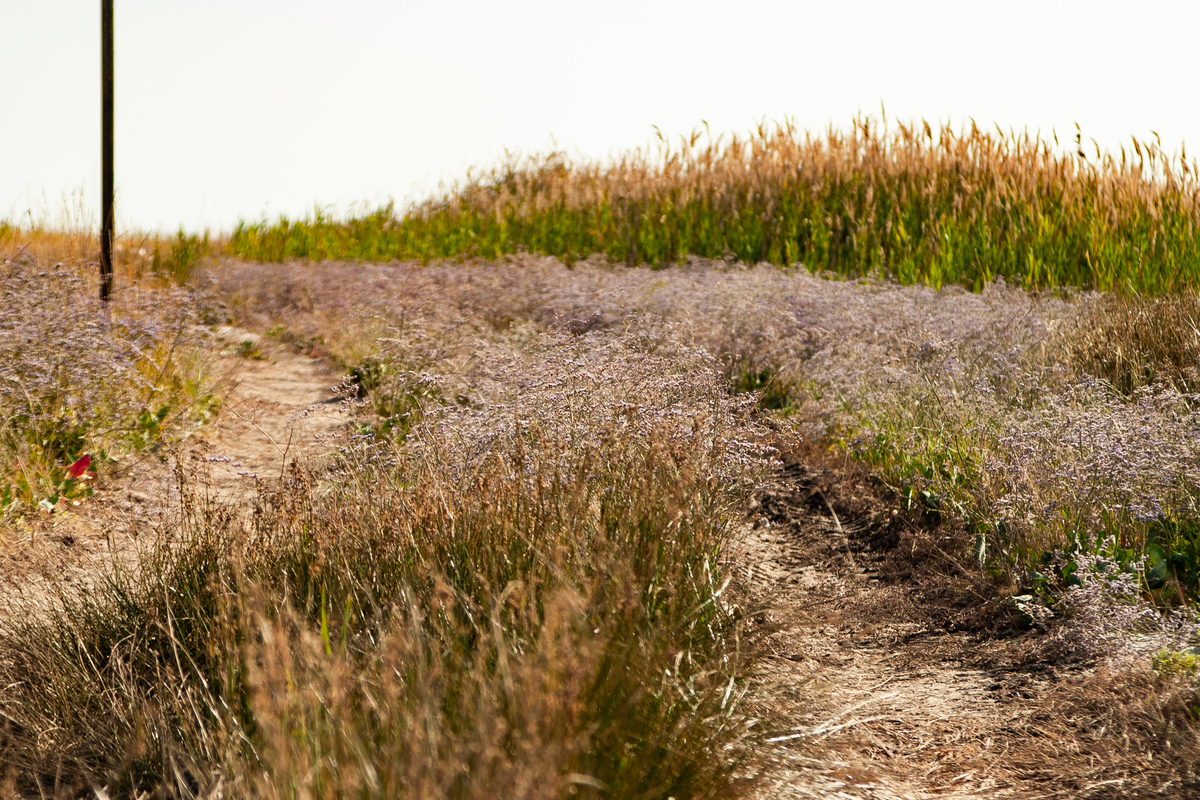 We didn’t even walked 500 meters before we saw a huge puddle crossing our road. This is such a small bay from the sea))) A warm sea puddle to the middle of the lower leg. On the way, people are walking confidently, rolling up their pants and with slippers in their hands. Well, that means – it should be like that – everything is OK)) We take off our shoes, remember with kind words the sharp bottom of Lemurian lake and go along the road. We move out the lake behind the lake no higher than the knee, if we walk along the “ford” (if the water is not muddy, then a lighter (higher) strip of the bottom is visible). If you go not along it, then you can get to the waist in some places. By the way, the lake is not standing – there is a flow. Only once we came across standing water – it immediately gave out the smell of rotten algae and grass)) 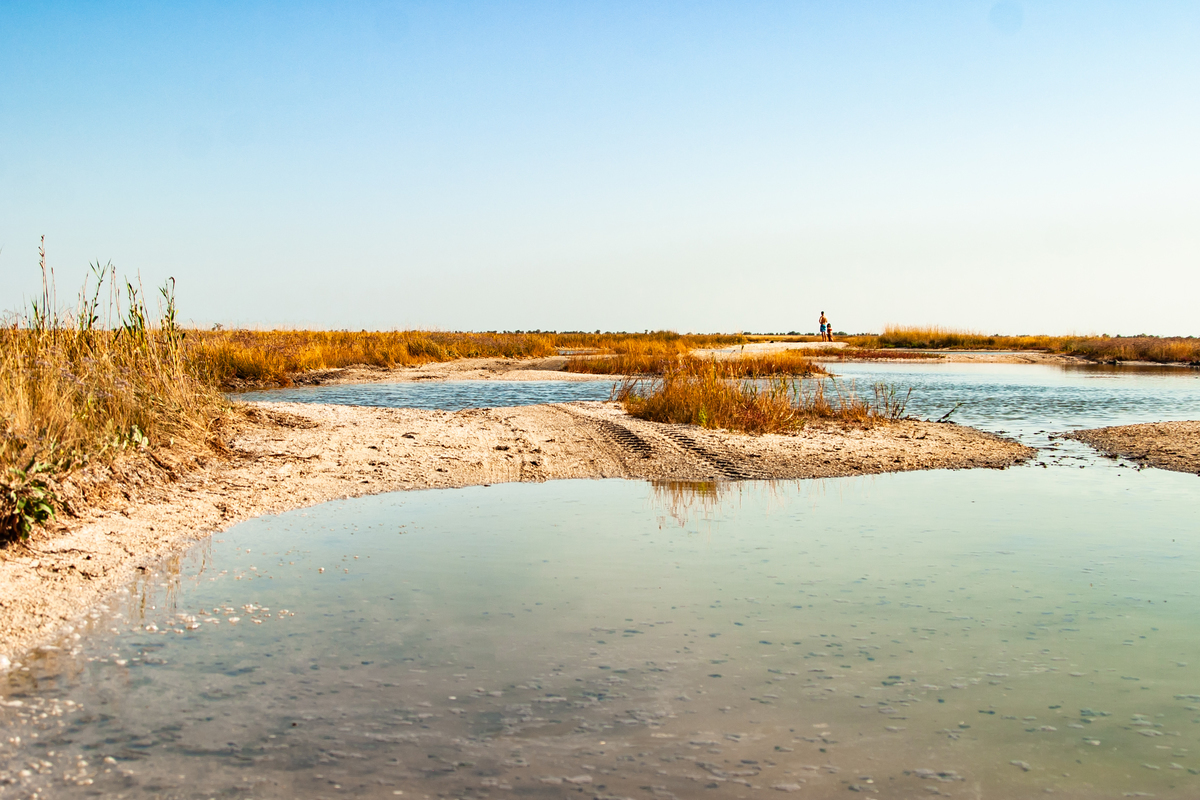 I don’t know exactly the number of such lakes, we walked through – more than two dozen for sure)) It is a very fun and enjoyable task to move in warm soft water on the sand)))
Here is how it can be seen on the map:

And then just the steppe … Beautiful! 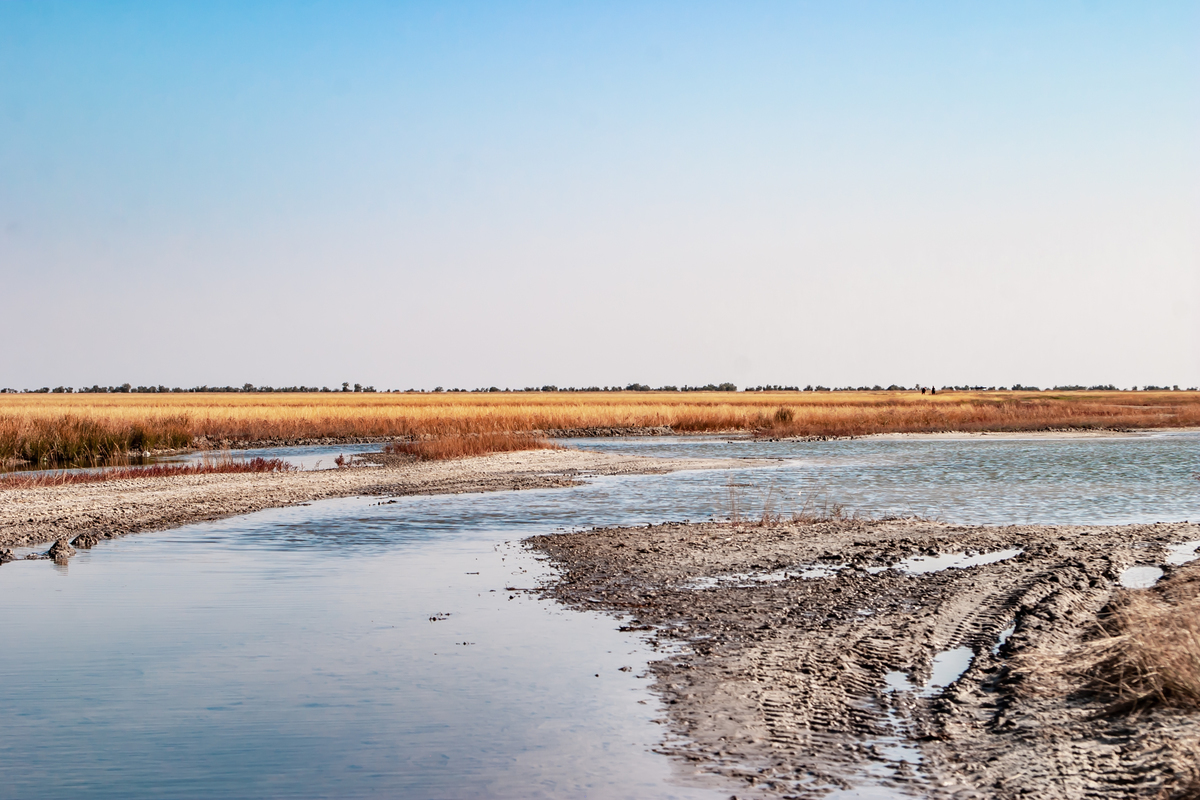 On the photo above, trees are visible on the horizon – that’s where we went. The map says that the distance is 3.5 km one way. Well, while we were happy in the warm puddles and examined everything around, an hour passed. And it is still to walk and walk towards the trees – we decided to hurry. As a result, we finally reached the “sea”. Very beautiful – an endless white sandy beach, a dark blue sea and only one tent on the horizon)).

A look to one side: 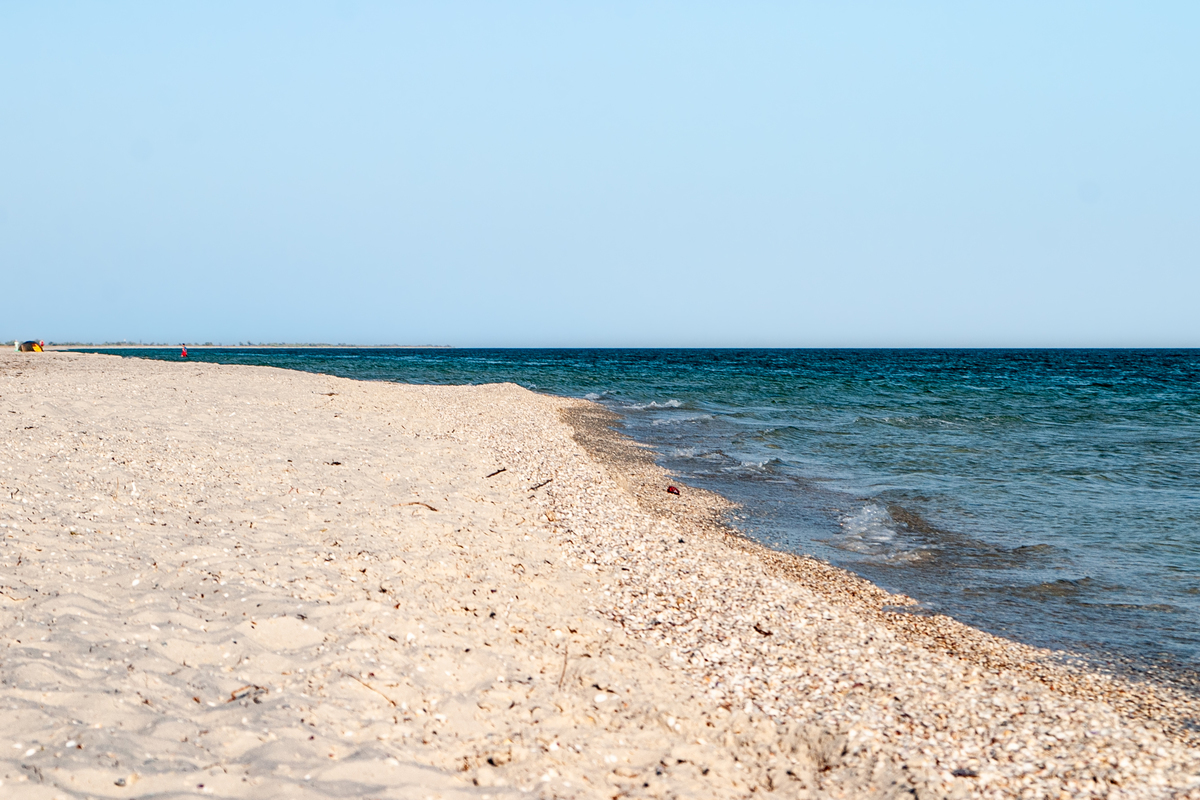 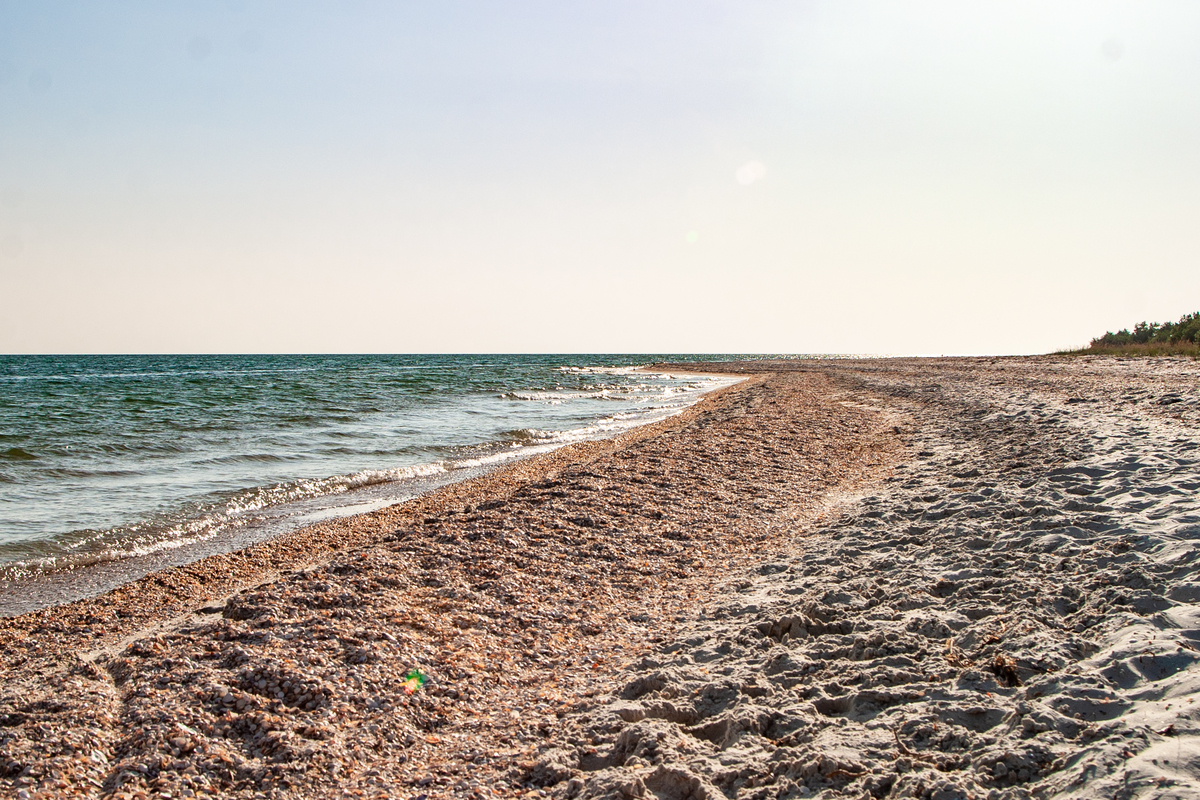 And the sea is full of jellyfish! Big and spiteful (I’m absolutely sure about that))) But if seriously – there were really a lot of them. And not the flat little things a palm sized, but normal blue hats with a rhombus and tentacles with the length of the elbow.
We touched the sea and moved back, since there was an hour left before leaving the island. Of course, in the direction of the “sea” we went looking at each blade of grass, but we did not know the exact number of kilometers. And our bare feet, stepping on each broken straw, falling into the sand, remembered us Lemurian Lake, a salt spiny bottom and a long road towards the “sea”. I tried to put on shoes – only worse. In such deep sand, it is absolutely expected that sandals heap sand and get stuck .. But it was worth a try – the paws were very tired.
And in the end we’ve made it running for half an hour. Well, okay. We sat down to drink cold birch sap and kvass. Arrived in time to the captain, moved back to Skadovsk with a breeze)) 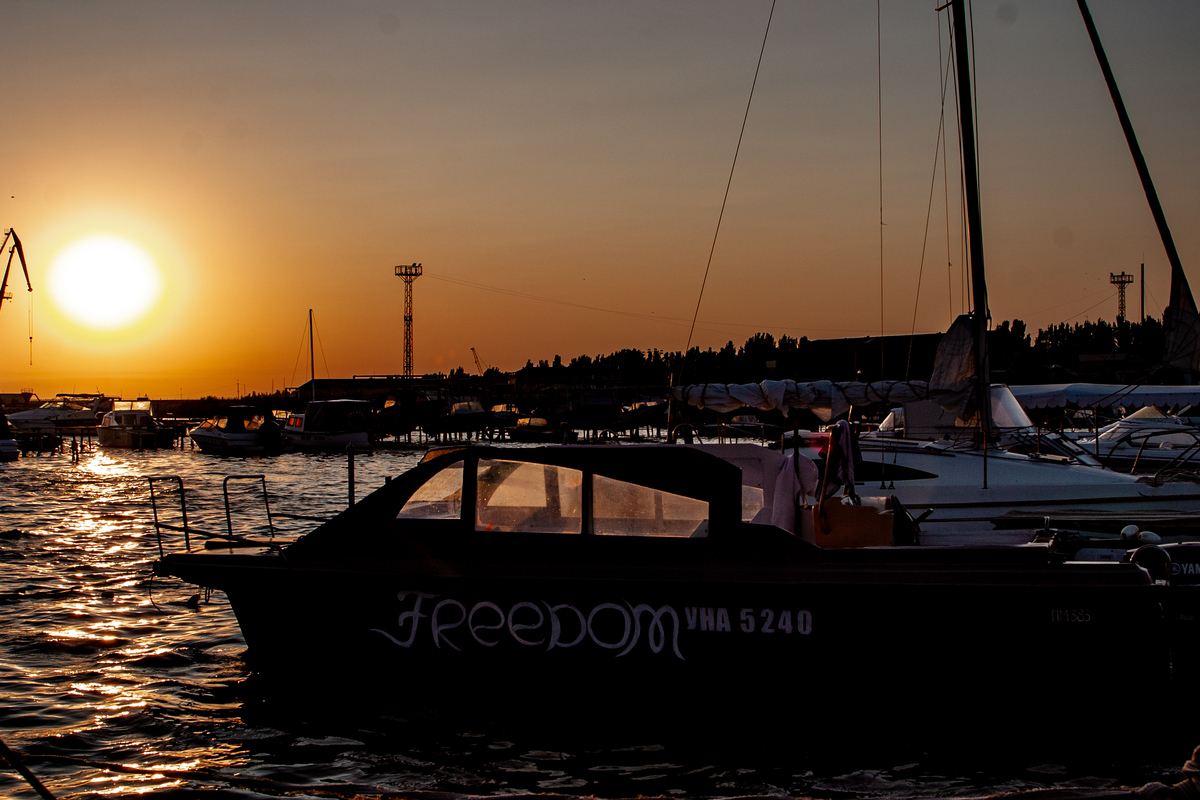 We got into the car and drove towards Odessa. We arrived in the middle of the night – tired but happy. Dzharylgach, we will return to you!