In the not so early morning, quite leisurely, we set off on a journey. Today we had quite a small driving, about 350 kilometers. But part of the path was along the mountain hairpin curves))
While trying to refuel, we encountered a problem. A day off and there were nobody at any gas station on the highway, everything is closed .. The wind drives an empty lone glass on the ground, and a plastic bag is dancing over it .. On the third station we understood, something was wrong. As a result: near each column there is a terminal, using which you can pay for the fuel. It’s simple – the Italian is resting, and the work is being done))) It is a pity that in this way we were left without lunch.

When you get off the toll highway, life does not end, but only begins)) Small regional roads are made as well as highways. But there is a nuance. I don’t know what this is connected with, but sometimes the central demarcation line disappears on the road. This means that the road service believes that two cars either can’t pass by here or they can, but with great difficulty – there are no two full lanes. Moreover, this can happen anywhere on the serpentine and last for approximately 50 meters, and then the normal width appears again. Although there are longer sections of the narrow road. Experienced people are very attentive to such a change in marking – they prefer to stay on the wider part if they see an oncoming traffic or somehow solve this issue in advance. So – it is not clear to me what this is due to the fact that in all places the road was paved equally by hollowing out rocks. But in some places more rocks were taken out, and in others – less. Why – it was not possible to visually determine (the breed is the same everywhere, visually the difference is not observed). There were a couple of obvious places where the houses of some old century are standing too close to each other (nobody will move them for sure). Well, there’s just one car driving through it with difficulty. Well, one way or another, this is the case))
On the mountainsides are not vineyards, but apple orchards and ancient temples. Temples and castles are so common that at some point you simply stop responding to them.

Our goal was the village of Sant’Antonio di Valfurva. You can walk from one end to the other in half an hour. The village itself of some old century (I hadn’t found out yet) is located at an altitude of about 1,500 meters above sea level. 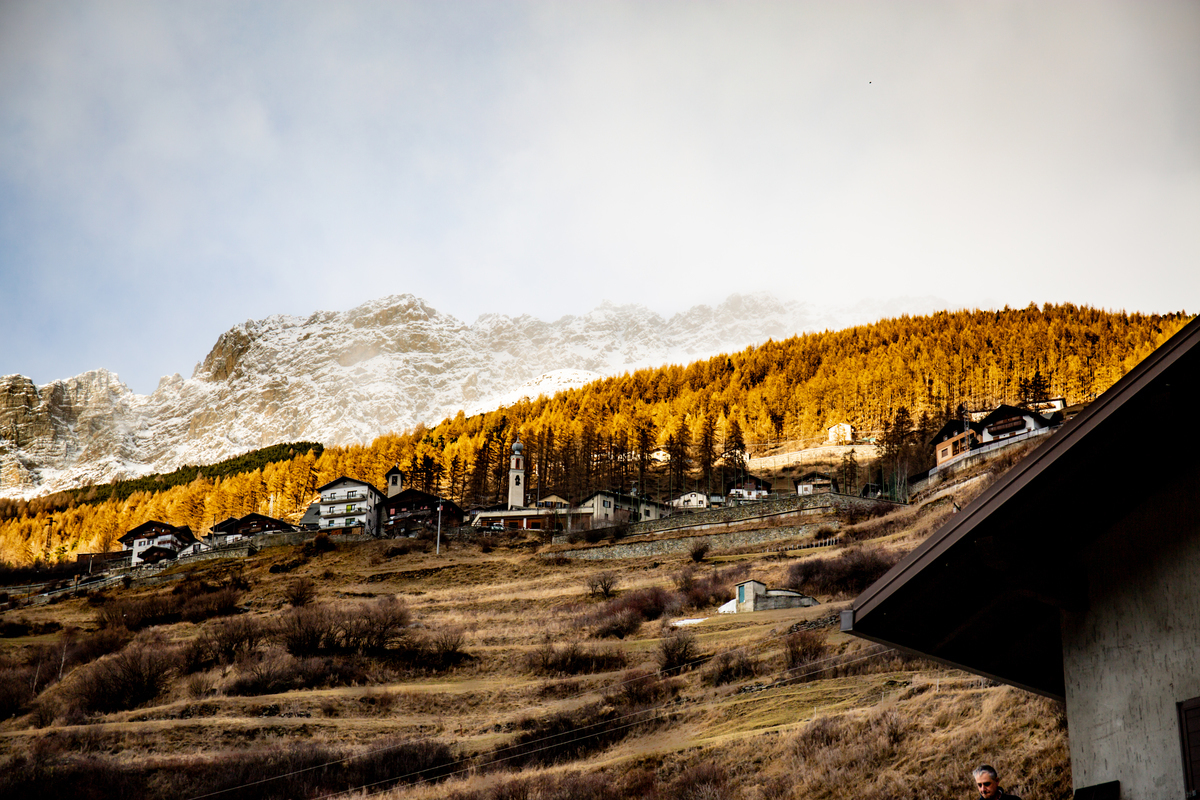 We got there around five in the evening. A very quiet and lovely place – stone houses, a mountain river, the sounds of sheep bells and silence … More precisely, over the sound of the river you can hear the sound of forest and wind in the mountains. And nobody .. in the streets. It can be seen that people are sitting at home – light is on in the windows. While it was still light, we decided to walk. Met only a couple of people. There is another hotel and a shop in the village.
We turned into a store with thoughts to buy sweets for tea. A small shop is a room with a couple of tables and a showcase in which half a grated shortcake was lying lonely. The choice is small)) For some reason, the seller was scared of us. It seems that we are not so terrible .. With some difficulty we explained to the seller on the theme of the pie. He was very surprised that we want to take all the remaining cake.
Total. Food must be taken with you. The nearest store is in Bormio. It is not far away, but you do not always want to walk five kilometers there.
Listening to the river, looking at the old church and breathing in the evening air, we carried our sweet booty to our apartment to drink tea. The house inside was very pleasant, modern and well-groomed. By the way, there is no snow around – only on the tops of the mountains and along the river, the weather is sunny and beautiful. 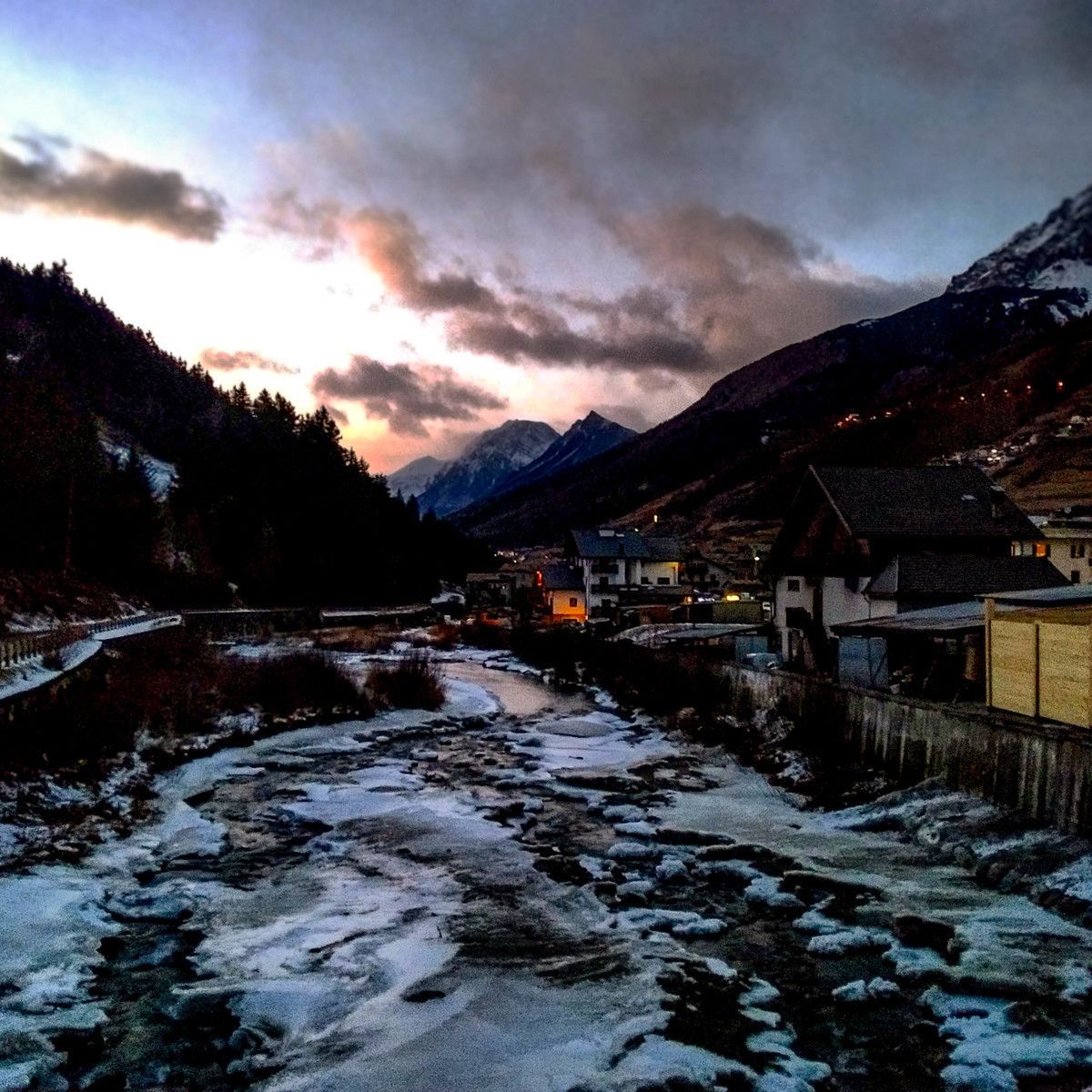 In the morning after breakfast, we set off for Santa Caterina di Valfurva. There is a lift to the top. There is a parking lot near the ski lift. It is not obvious, but not difficult to find. From the parking lot there is access directly to the ski lift and to the restaurant. 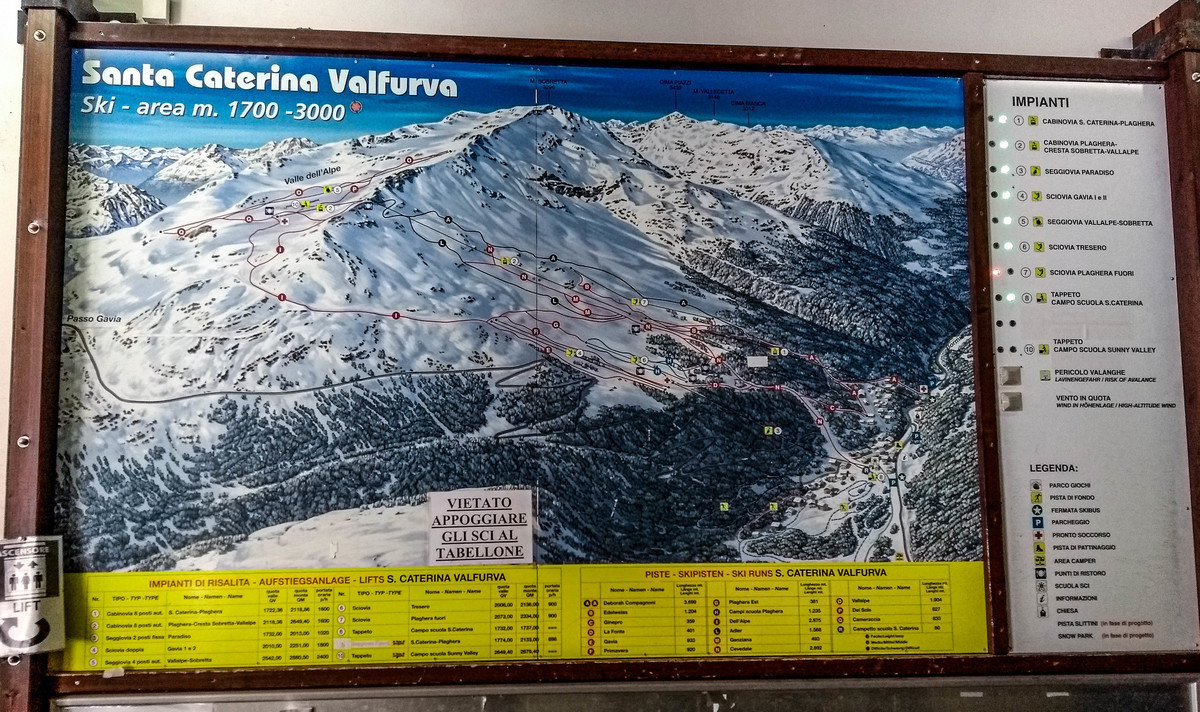 At the box office, we were kindly sold tickets without “skiing” – only to observation decks (this is one trip up and two down). There are two lifts there – in series. And from the second you can still walk hard and get to the third in the upper valley. Getting off at the first stop, you can get on the ski run to the road. But we went directly up. 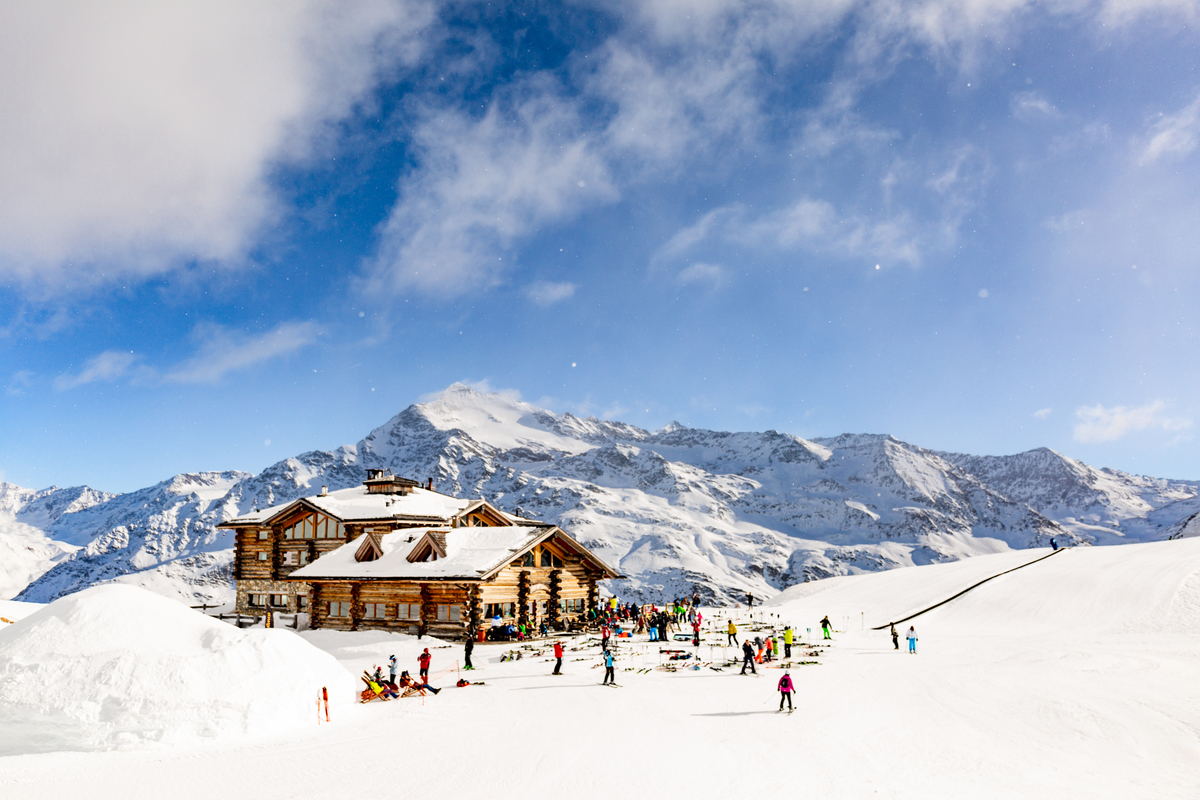 Here is such a lovely and cozy place to relax. In addition to us, I saw only two people without skis, and quite a few skiers. By the way, that is not a season at this time. Why – I do not understand. It seems to be snowing, and winter is outside .. But that made only pleasure to us. 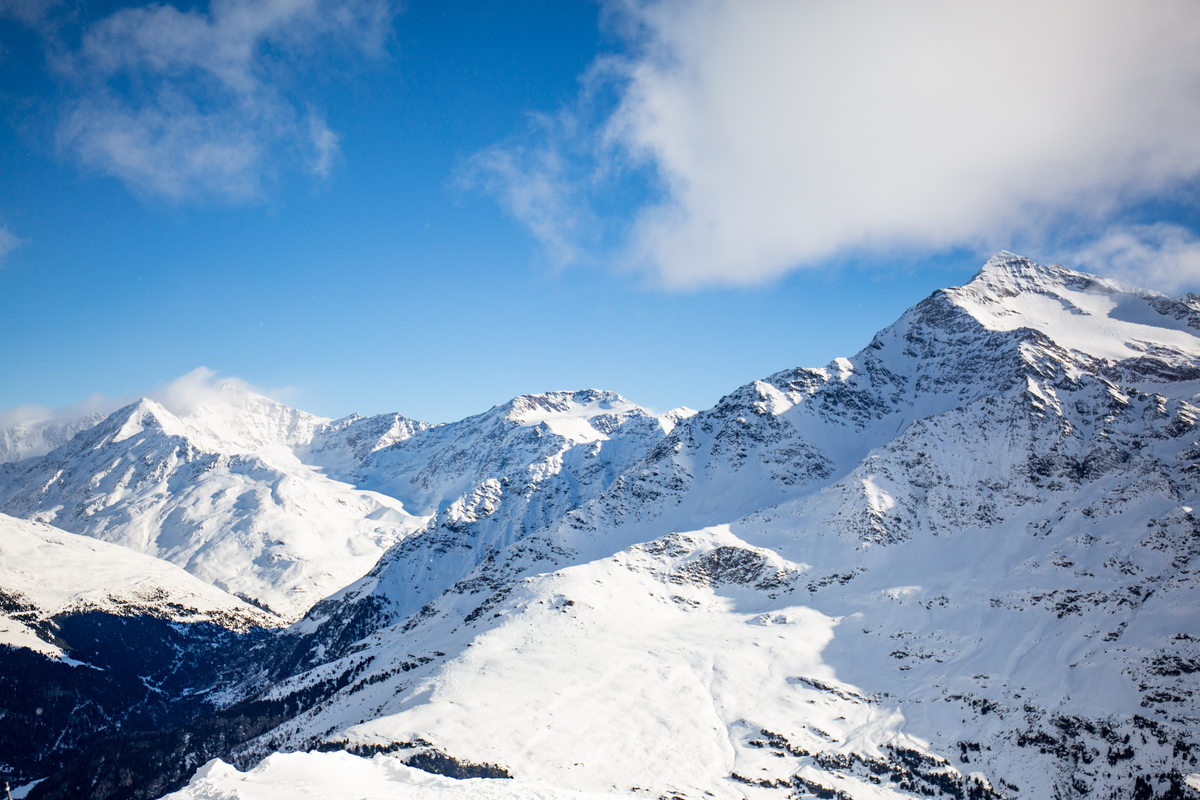 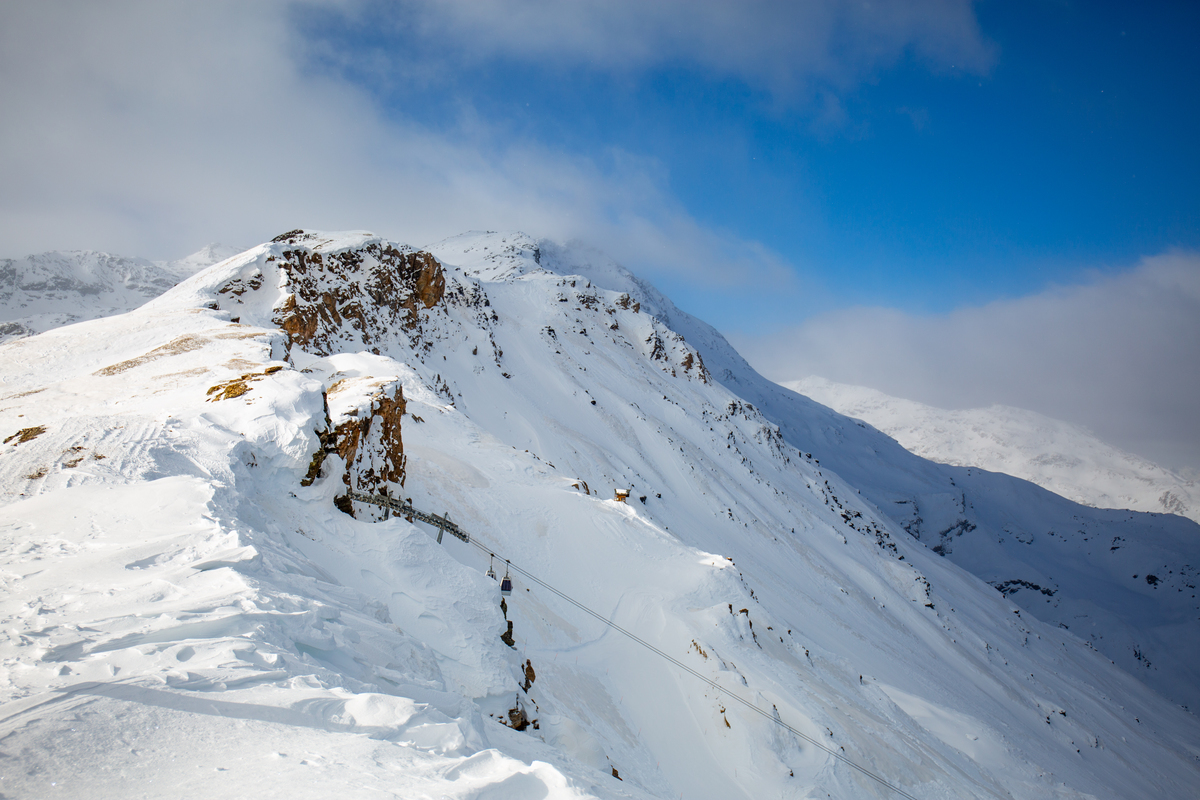 The beauty around is indescribable!

Having walked well, we drove down. 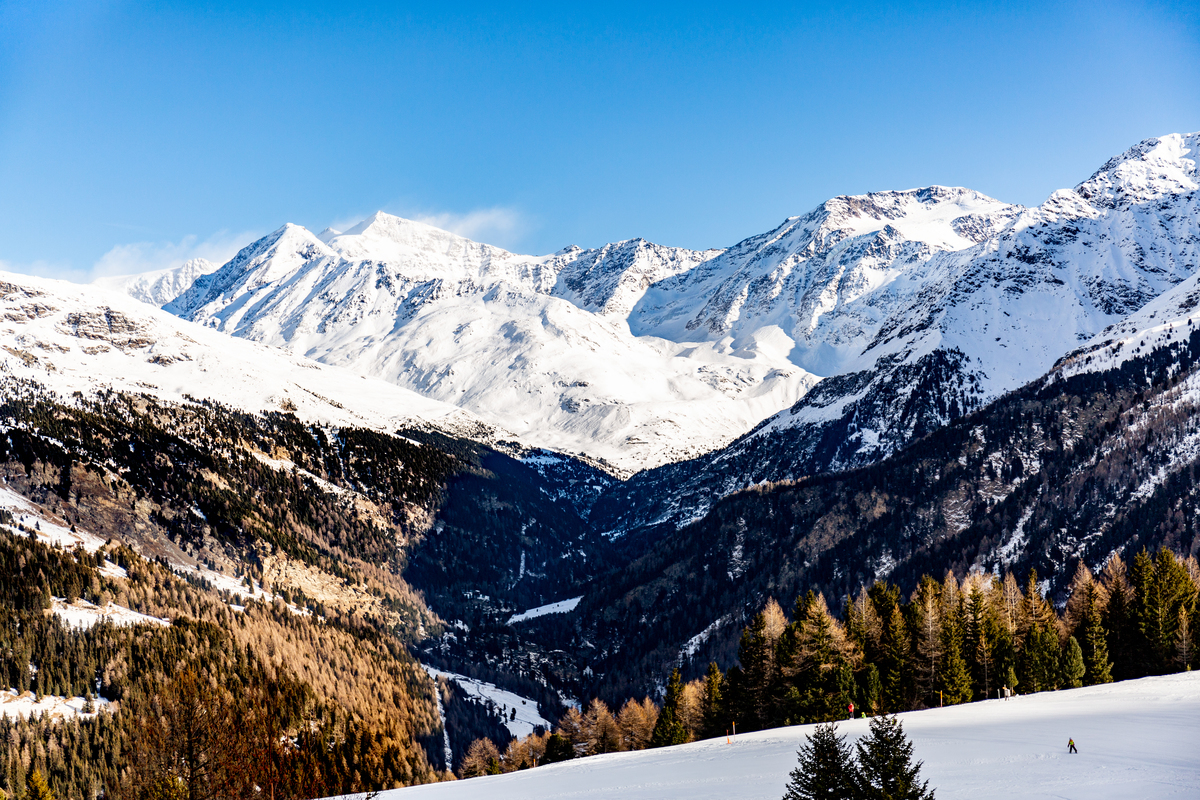 The next stop has its own beauty)) But there is much less space for a walk.

Going down, we walked around Santa Catarina a bit. 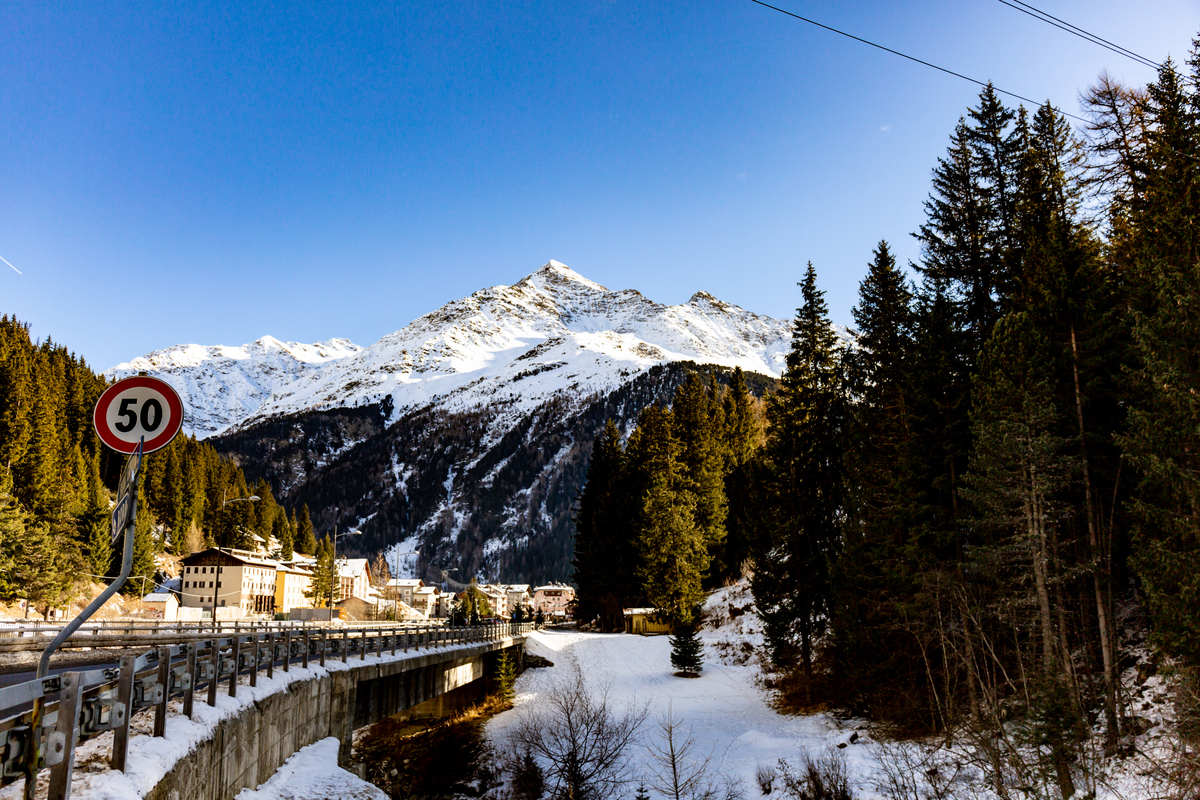 And went to Bormio.
There you can leave the car in the municipal parking lot and go for a walk.

There is also a ski run in Bormio itself, but it is lower than in Santa Catarina and there are much more people. And the town itself is old and beautiful. 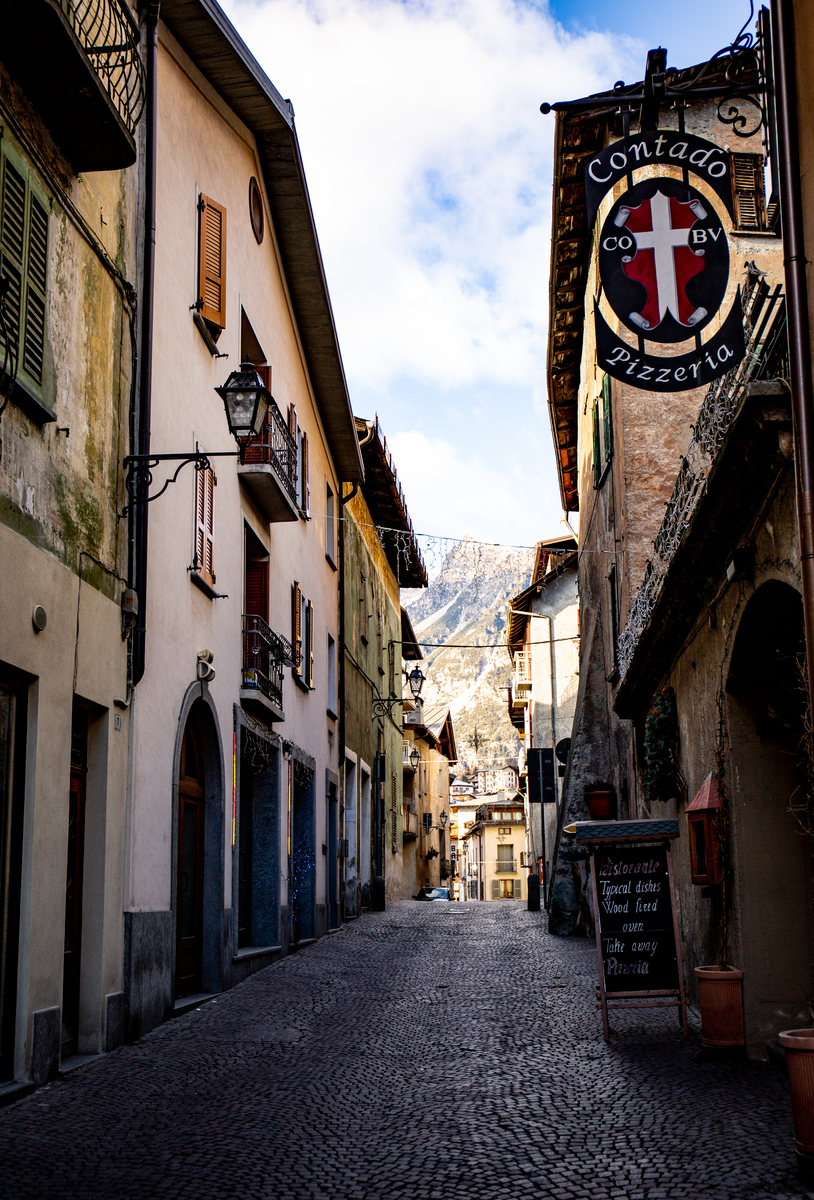 The first settlements in Bormio appeared in prehistoric times. Before the Roman conquests, this territory was inhabited by Romansh tribes and Celts. The town itself appeared in the first century AD thanks to the Romans who built their outpost here. They were also attracted to the thermal springs on which they built their baths. They are very popular even today. Due to its strategic position at the intersection of important roads connecting northern Italy with the Transalpine region, by the tenth century, this area had been conquered many times by various rulers and passed from one ruling dynasty to another.

The province gained municipal independence thanks to a XIV century law that granted special rights and privileges to the people of Bormio, which helped the region become a thriving shopping center. At this time (from the end of the XIV to the end of the XVI century), active trade was conducted between the Duchy of Milan, Venice and the regions of the northern Alps. The land of Bormio became famous as the Magnificent Earth or Magna Terra di Bormio e Valle d’Onore …

Trade intensified at the beginning of the 19th century on the Stelvio military road, and the opening of a spa (in the modern sense of the word) at the beginning of the 20th century marked the advent of the era of tourism in the region. The alpine skiing world championship, held in Bormio in 1985, completely changed the course of life of this city. After that, Bormio became a resort. And one of the best in the territory of all the Alps. In addition, the 2005 championship left a mark in the form of the newest lifts and wonderful comfortable hotels. 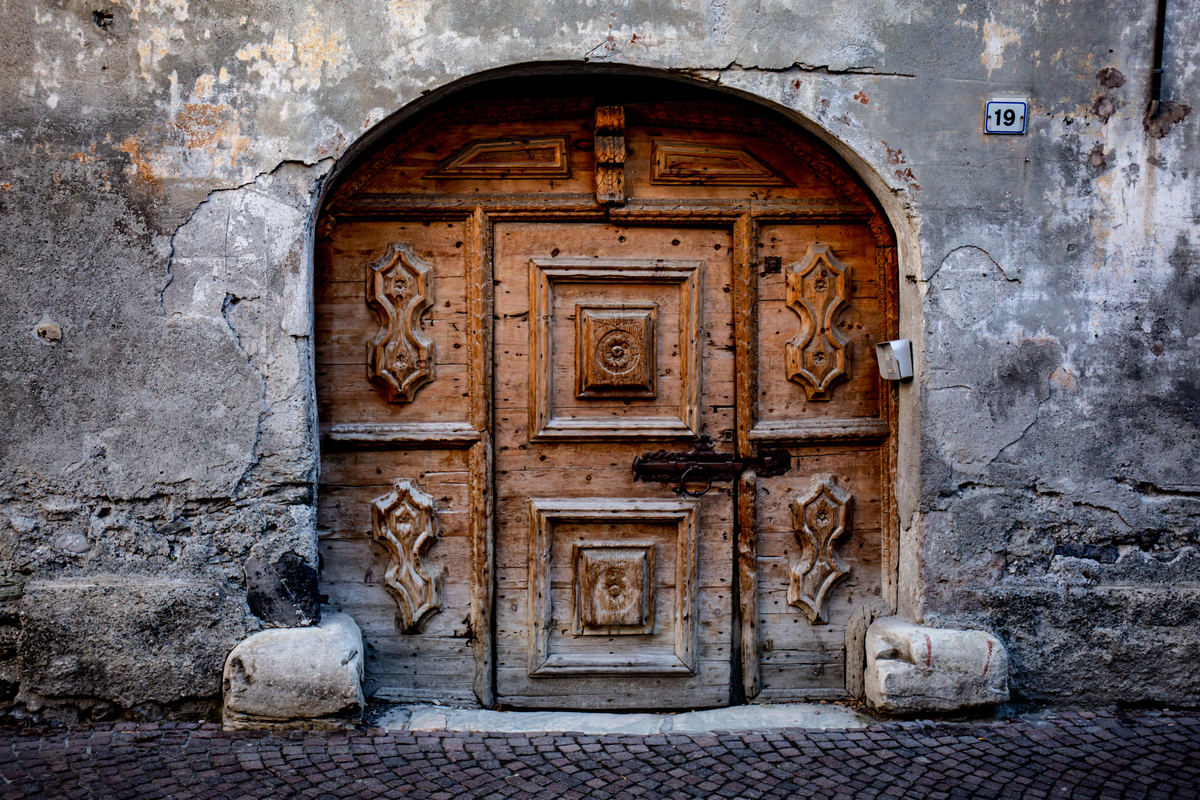 The town is very cozy and nice, and if you walk during the lunch break, then it is almost deserted. Yes, there are a lot of historical sights in the city, but we devoted this trip to emotional impressions. Therefore, we did not look at any specific names or stories. Just wandered and impressed))

The thought of food came to us at Piazza del Kuerc. Around is full of all sorts of cafes, restaurants, but only two work – all have a siesta. – pizzeria serving at siesta))

The menu does not indicate either the size or weight of the pizza. But we decided to risk one at a person. It turned out they were each about 40 – 45 centimeters in diameter – quite a lot for one person. The funniest was pizza with salami: a dough with tomato sauce on which there are four thin, but large pieces of salami (they occupy the entire area to the brim) and a bit of cheese. But the calzone is filled with ingredients so that even over the edge, though the anchovies in it are clearly superfluous for my taste.

Having gorgeously eaten and packed the rest of the meal with us, we went to look for the most ordinary store / supermarket for the locals. And we found it. In addition to dinner and breakfast, we still had the next day to go to another part of the Dolomites – to the Austrian – and to eat something along the way. 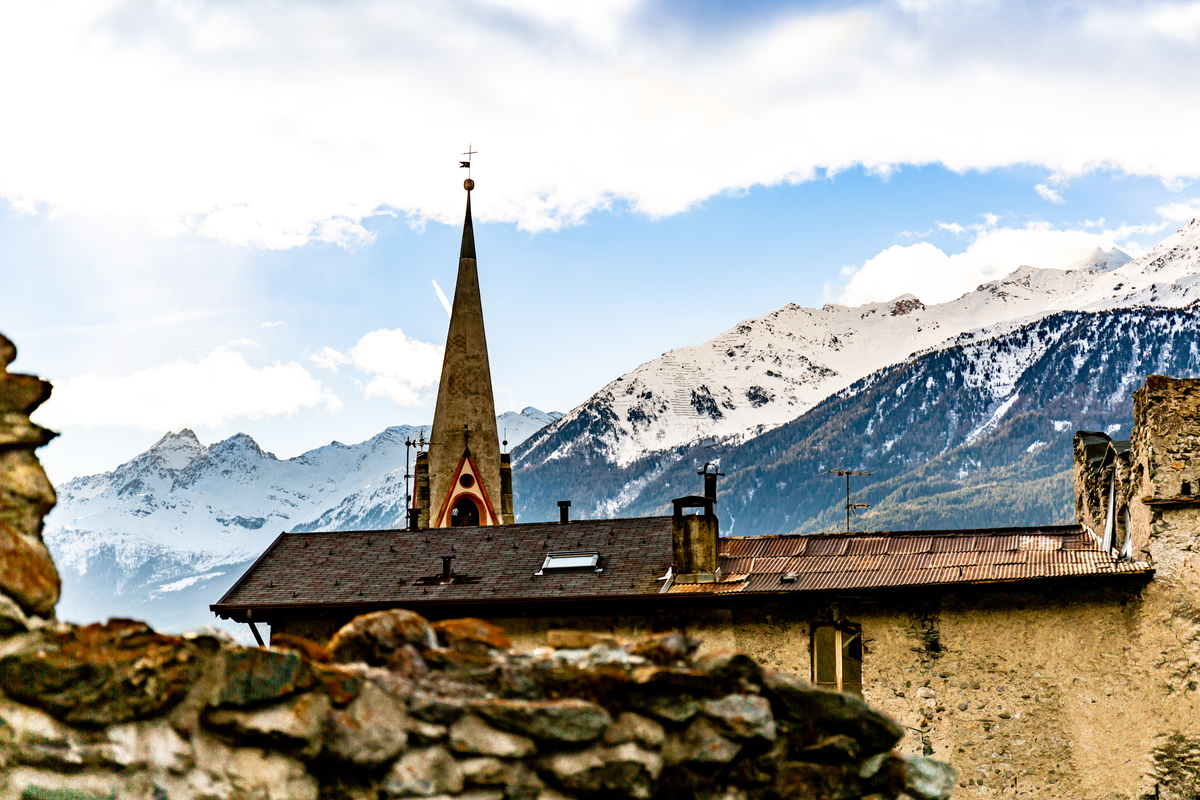 It gets dark early in the mountains, and by the time we got to our dwelling it was already dark. And later we went for a walk again and listened to the evening bell ringing and the sound of the river and the wind. 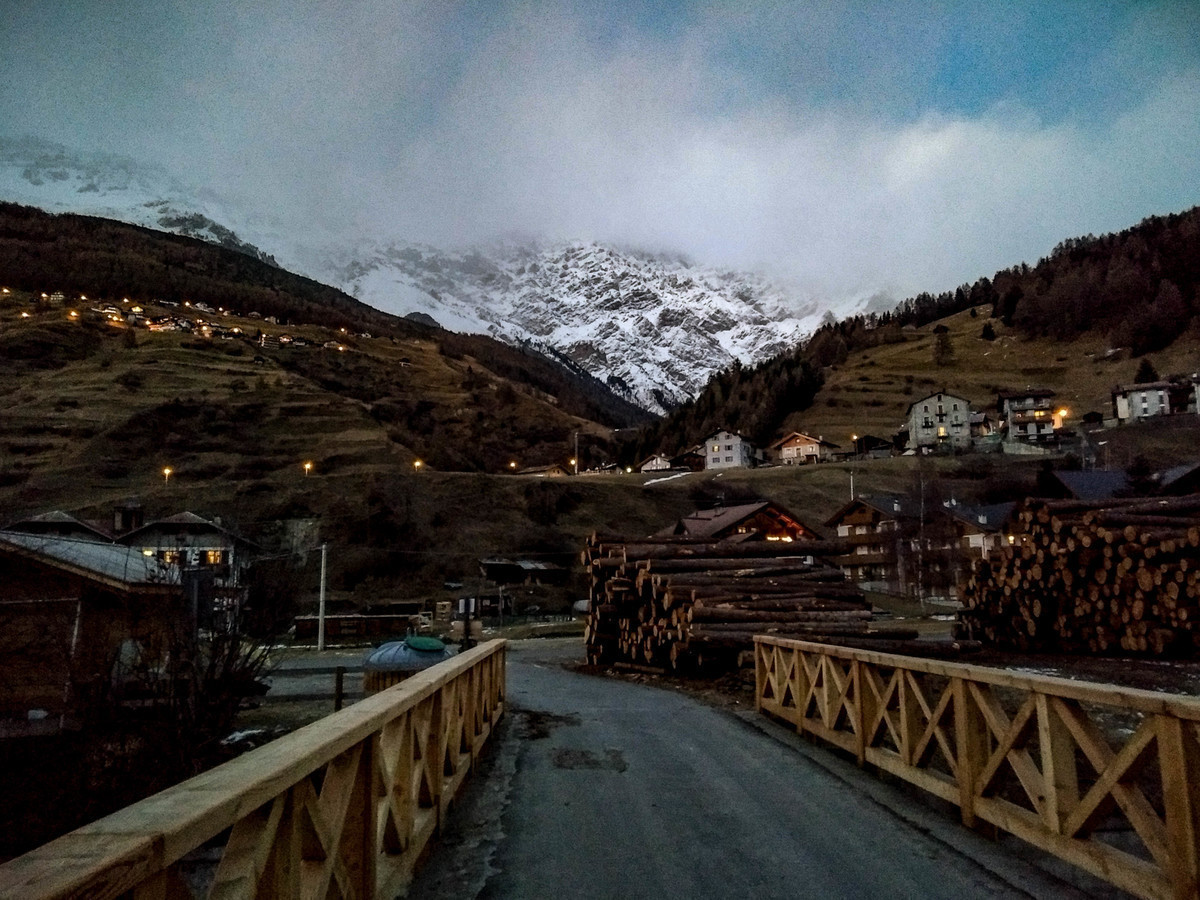