When we received an offer to join the trip, we could not refuse)) Well, who will refuse?))
The problem arose at the stage of buying tickets to Prague (our journey began from there). And the problem was that: a month before the flight, low-cost tickets cost more than ordinary ones. As a result, we took tickets for an early morning of January 1 at UIA for a fantastic number. On the day of the purchase, Black Friday ruled over the world, for which we had a couple percent hope. Hopes did not materialize, the UIA website was dead than the dead, and we drove to the airport. The friendly girl at the box office asked where, when, how much. Then she looked up and slyly asked, “Are you sure you can do it early in the morning?” We smiled in the affirmative, she laughed and the tickets were bought.
To our surprise, in the early morning hours of January 1, there were a lot of people flying — the plane was full. Fortunately, nothing interesting or extraordinary happened in flight)
Almost spring met us in Prague – against -20 ° C and three meters of snow in Kharkov – green grass and about zero degrees. Beauty!
From Prague we went to a city called Písek – it was on the way to our base. 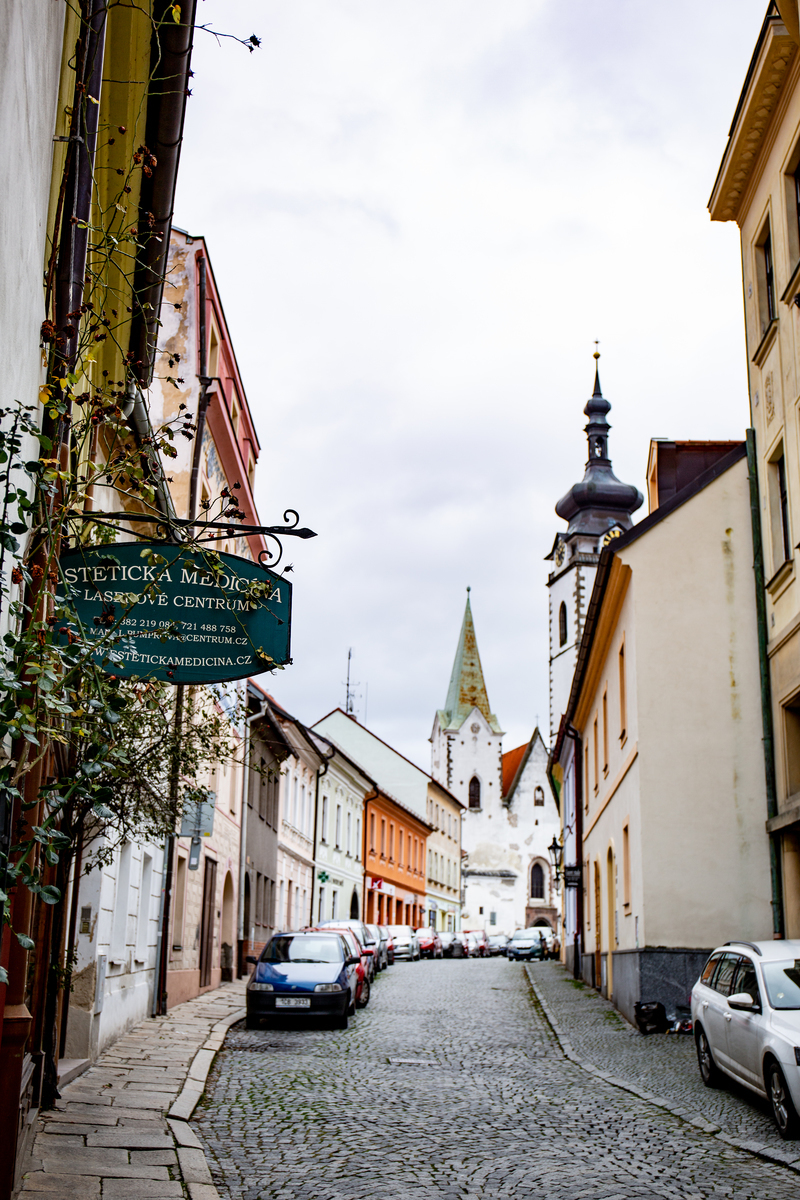 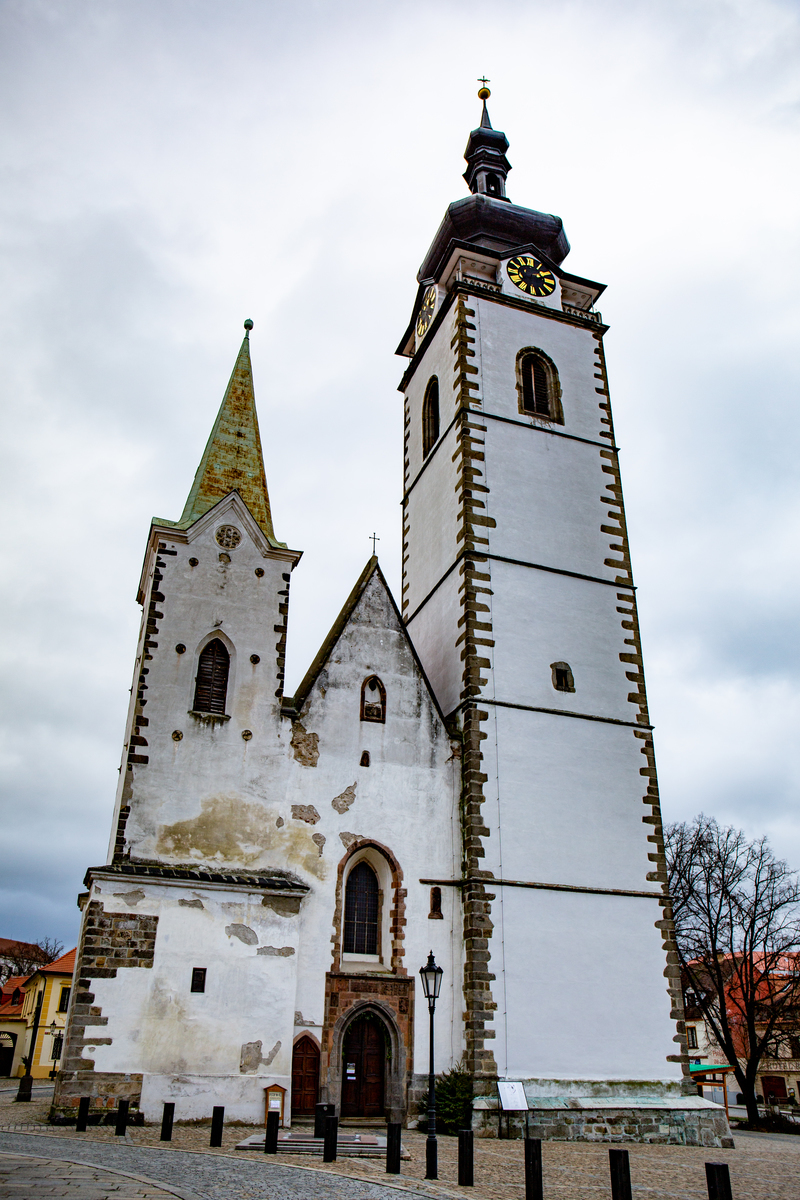 Pisek is a tiny town with neat colorful houses and cobbled streets. The city has a stone bridge (Kamenný most) 109.75 m long, built in the 13th century. This is the oldest stone bridge in the Czech Republic. After the flood in 2002, it was restored. 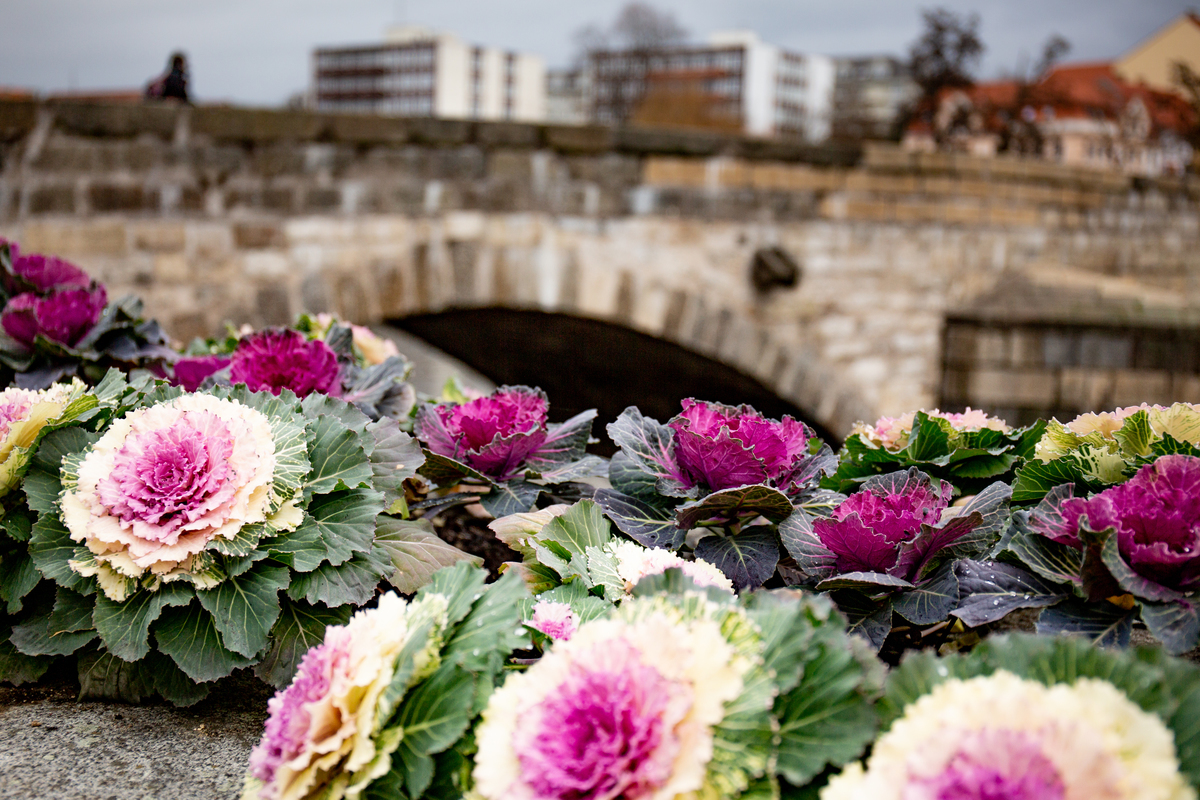 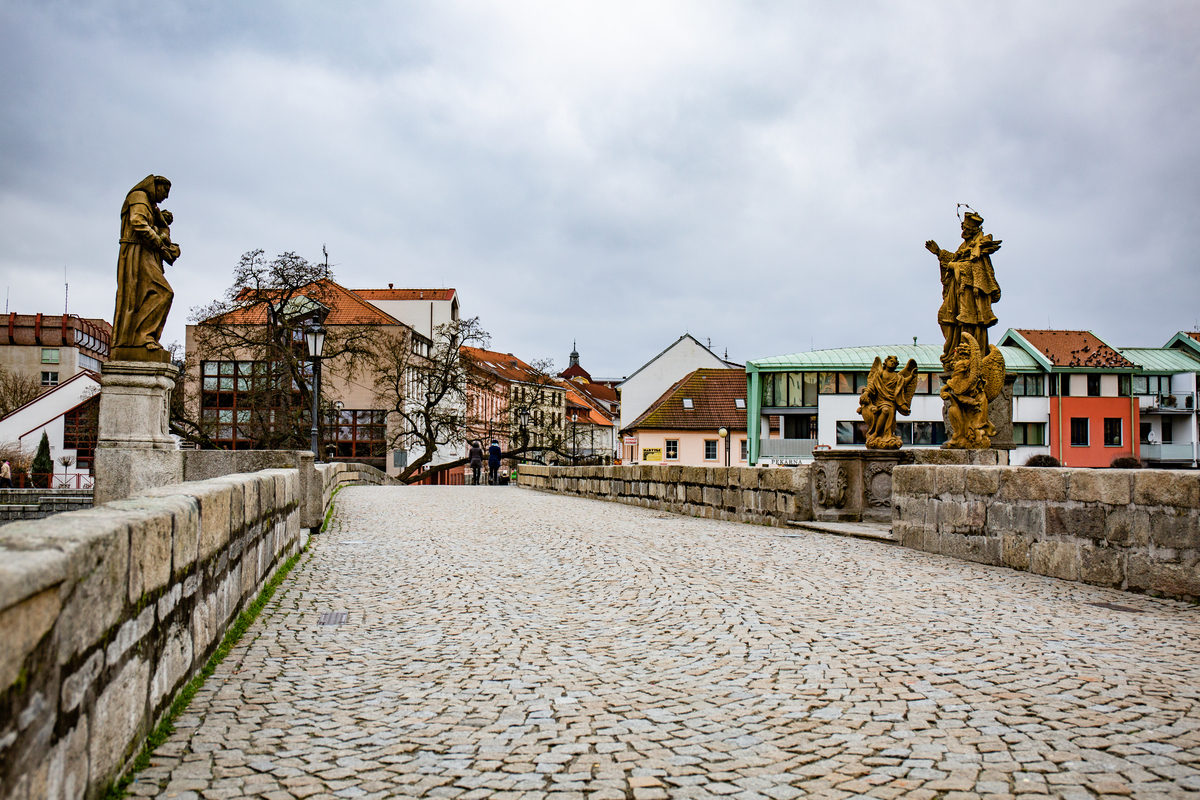 I got the impression that any town in the Czech Republic has some kind of feature that residents are very proud of. Someone has the oldest bridge, someone has the oldest house, someone has the most beautiful fireworks .. And so on))
We wandered around Pisek for about an hour – there is nothing longer to do in the city. Further our path lay to Vodnany. This is also a very small city, which lives off the poultry farm and the Institute of Rybarstva. So in Czech there will be fish farming. I caught a word, as it was with the employees of this institute whom we visited. People are very kind, pleasant and friendly. True, I had to talk to some through a third person who knows Czech, but even with gestures everything worked out very well)) The vast majority of Czechs (not only our friends) are very friendly people.
Having a rest from the road, we went to the neighboring town of Protivín – to look at “the largest fireworks in South Bohemia.” All this action was timed to the end of the Christmas festivities – people from all around gathered on the square. I must say that for them to go to the supermarket for groceries on the way from training – it’s to drive some extra 30 kilometers)) since training can also be out of place maybe in 50 kilometers))) Well, here too – from the whole district – this is a radius of 100 kilometers from the town.
The fireworks were beautiful, juicy, we can even say that to the beat of the music))) Well, in places – didn’t get to the beat, but a light melody was guessed. In any case, we enjoyed it!
Well, after that – we went on a visit, sat with tea / coffee and went to the tavern. It is called “Ulichka”. Such an archetypal European tavern for itself – several solid wooden tables, a muffled warm light, heavy music plays and peasants sing along to it, waving glasses with beer)))
In addition to a large number of friends and a pleasant evening, there was a very memorable dish “laying on hermelines” (nakládaný hermelín). These are small round soft cheesecakes with white mold, inside of which hot peppers marinated in oil are baked. Personally for me it’s too hot, but for lovers – just right))
The next day we went to see Prague. We were told that we brought winter with us – while we were traveling to Prague, we overtook the snow front. But he caught up with us in Prague.
It is better to park a car on the parking lot of a supermarket or entertainment / sports center on the outskirts. In the center of Prague it is extremely inconvenient to travel by car – narrow small streets, it is difficult to find a parking place. Parking spots are paid mostly everywhere, but their cost is quite small. We took the subway and calmly reached the Center. The inhabitants of Prague have a travel card and they just go into the subway – the travel card does not need to be applied anywhere for reading. To take one for one day, of course, is pointless. Near the entrance there are time stamping machines and a turnstile for printing entry time on them.
We landed at the Hradčanská metro station and moved towards the Royal Garden. The garden was expectedly closed due to the time of year.
And on the way to the Old Town, we were caught up by the exact snowy front that we overtook on the highway. 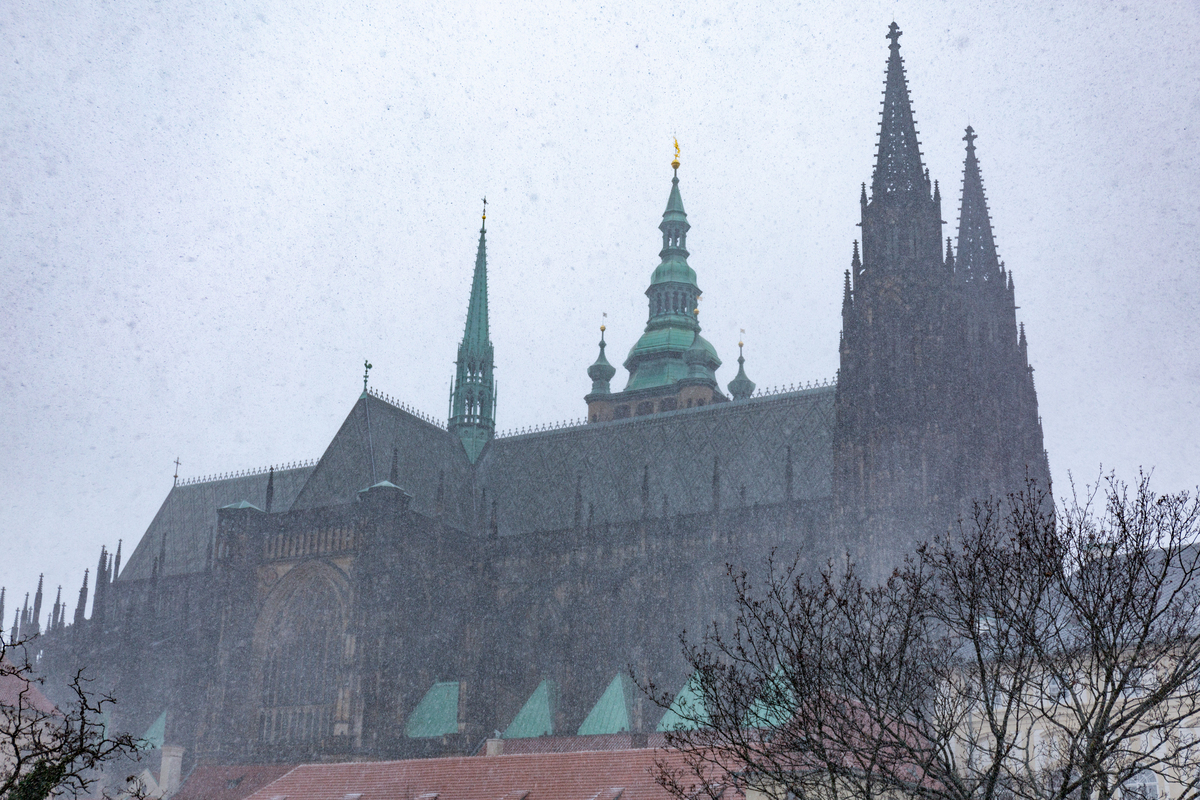 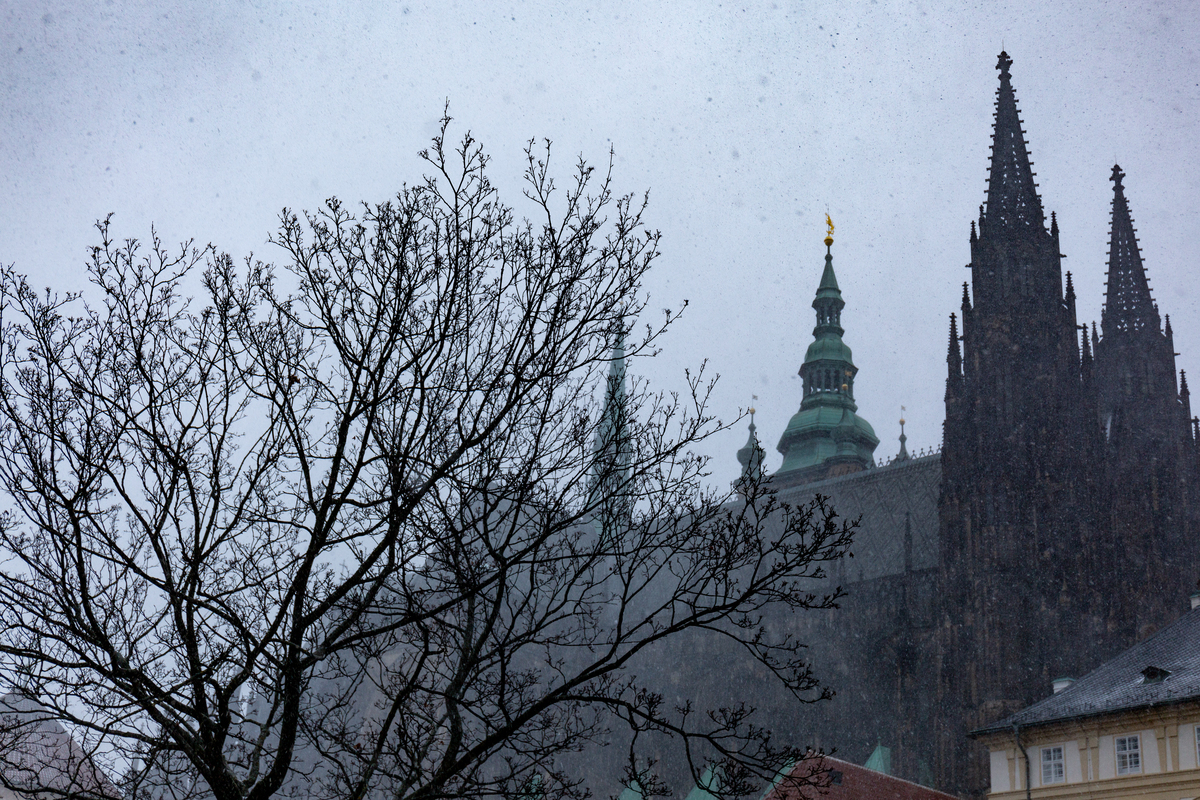 It began to snow, all the tourists ran to seek refuge. We were quite comfortable, since we came from more severe conditions, and many people around were dressed easily for such weather. As a result, we went inside the St. Vitus Cathedral (Katedrála svatého Víta, Václava a Vojtěcha) in a crush – those who did not have enough space under the arches were breaking in there. 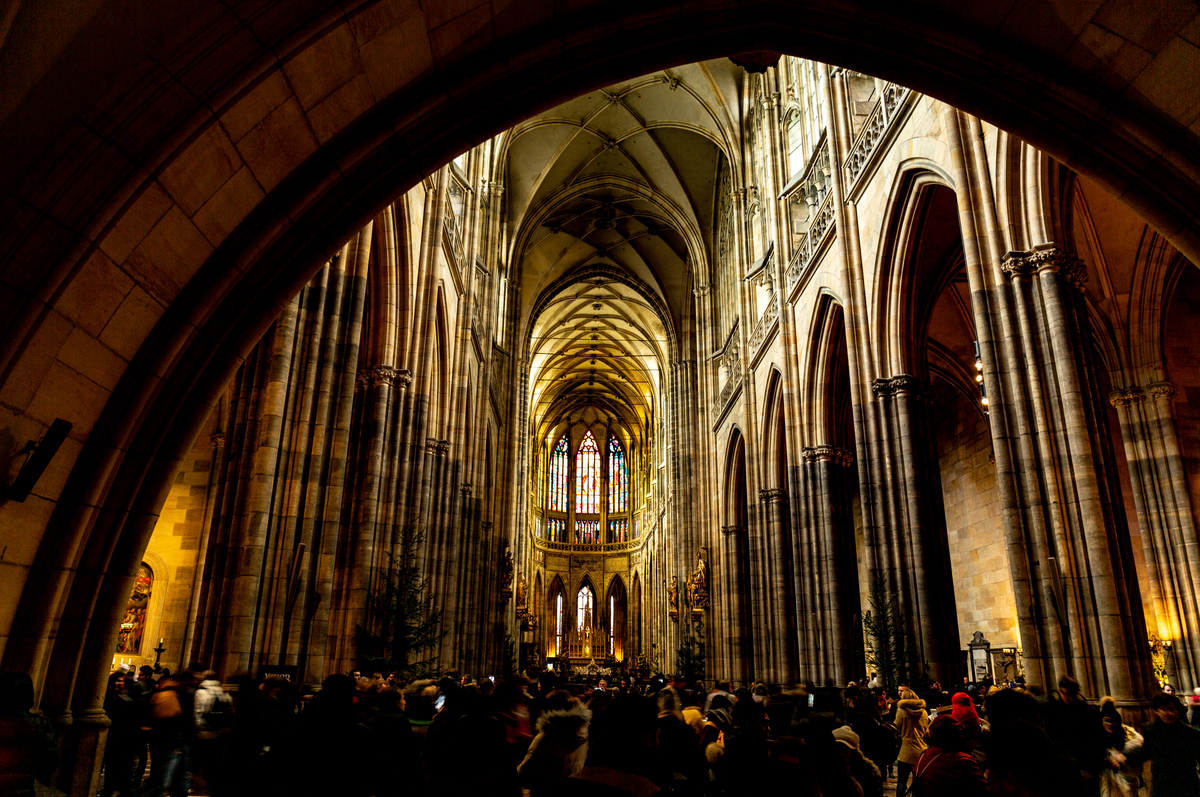 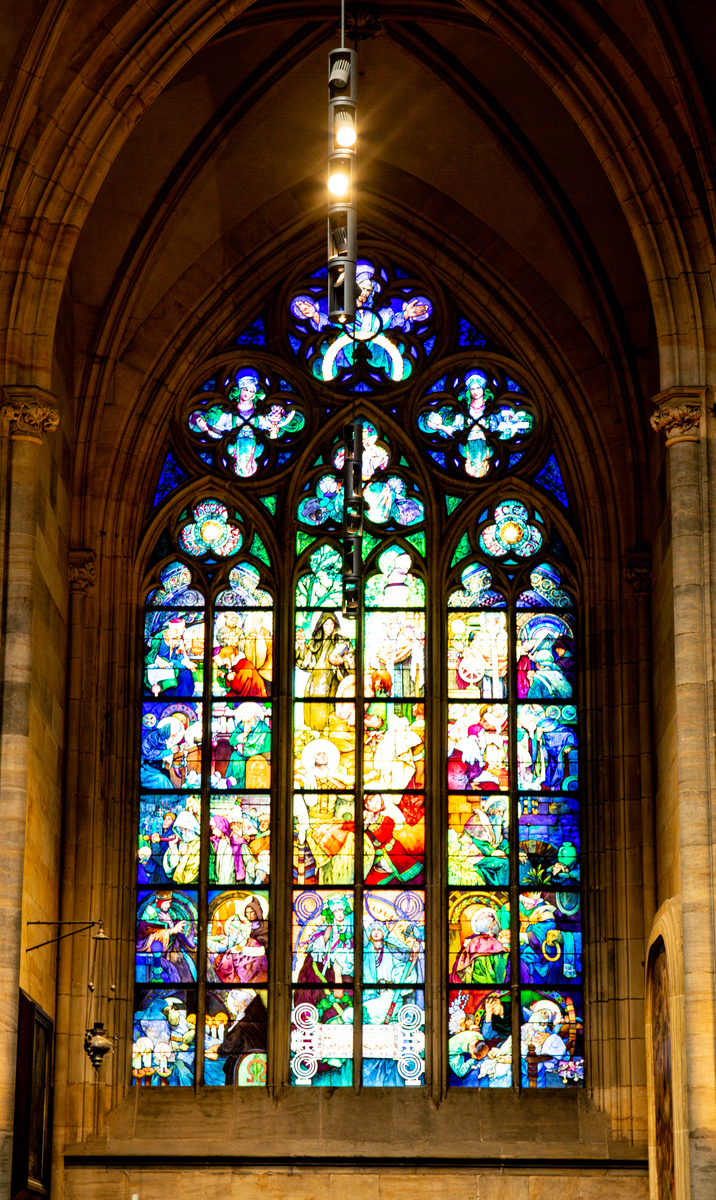 I was in Prague in 2006 and there were much fewer tourists inside the cathedral, and the interior was all open. Now you can go from the entrance a little to the right and a little to the left – the distance of two windows. Naturally, the whole crowd gathers in this small space. In addition, it turned out that we were lucky – “very small amount” of people. Wow! How is it here during the high season?)) 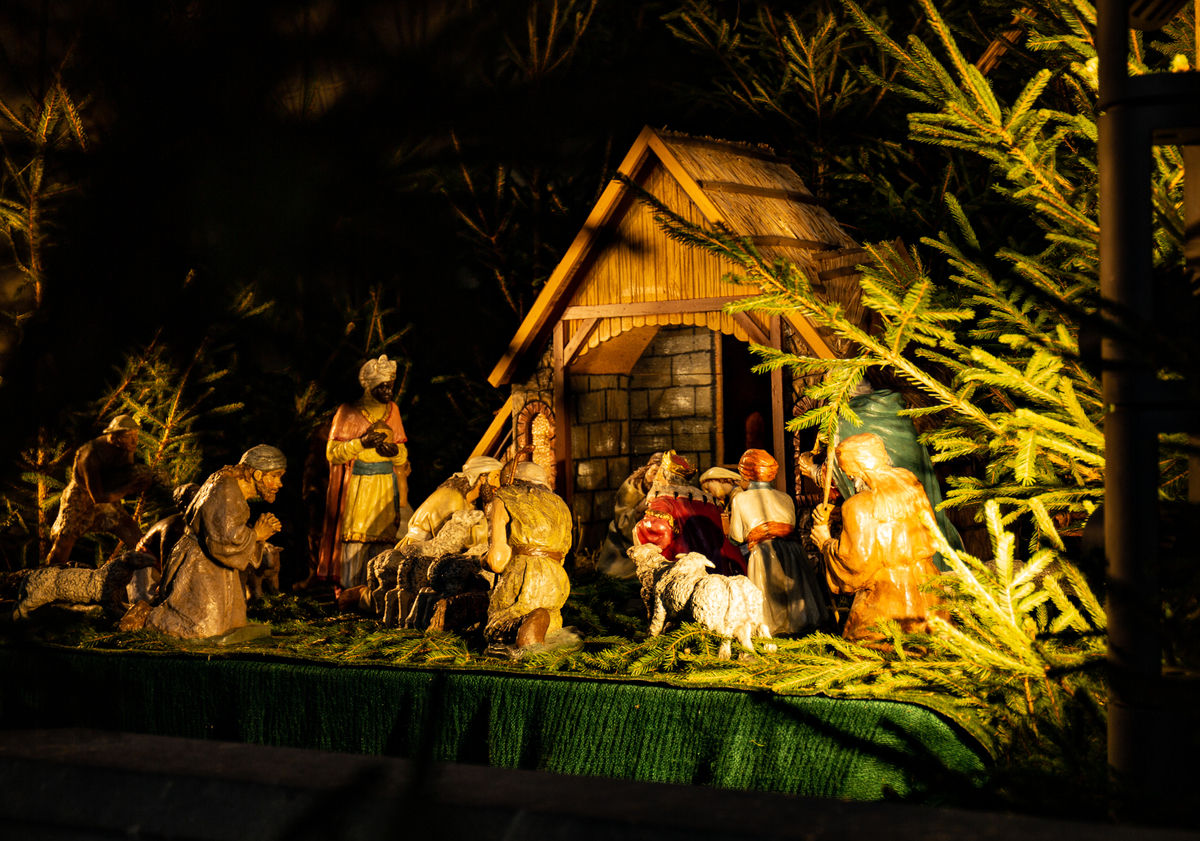 When we left the cathedral, the sun was already shining in places on the street. Of course, I was pleased that the camera does not cover up with large fluffy flakes of wet snow.
And so, strolling smoothly, we headed towards the old streets, Prague Clock and Charles Bridge. 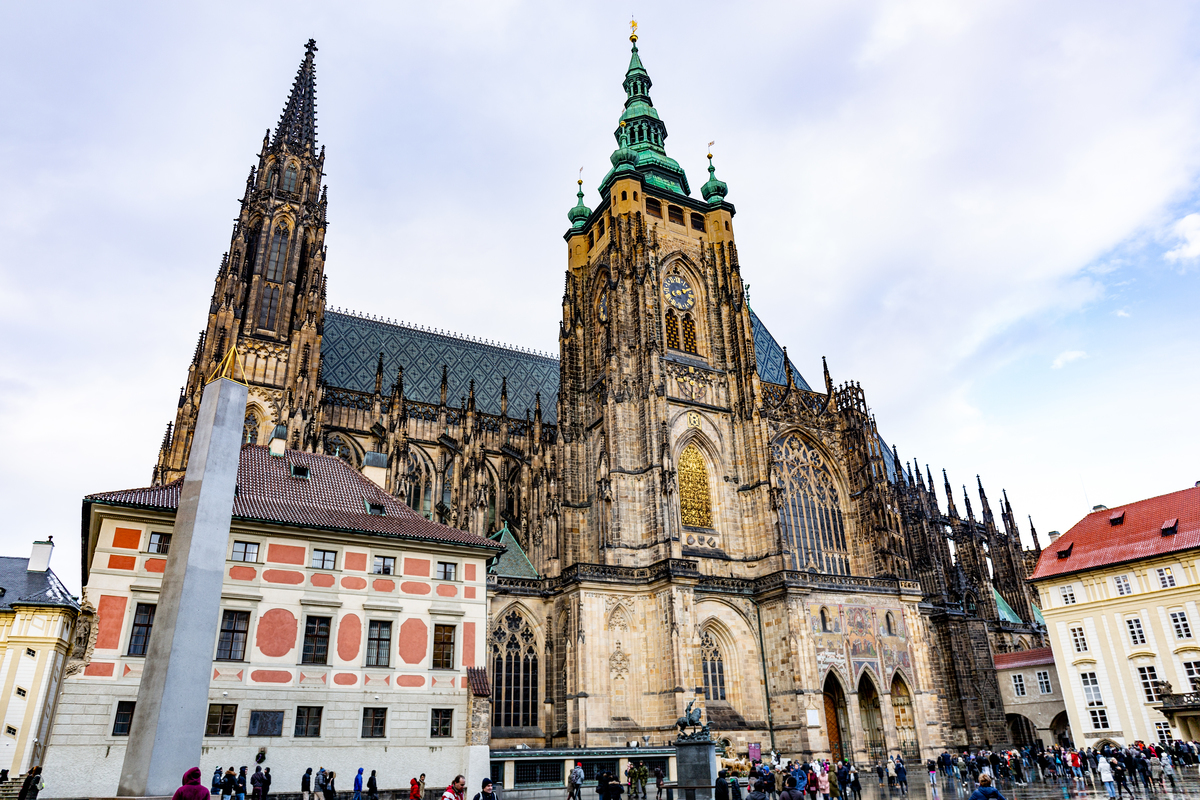 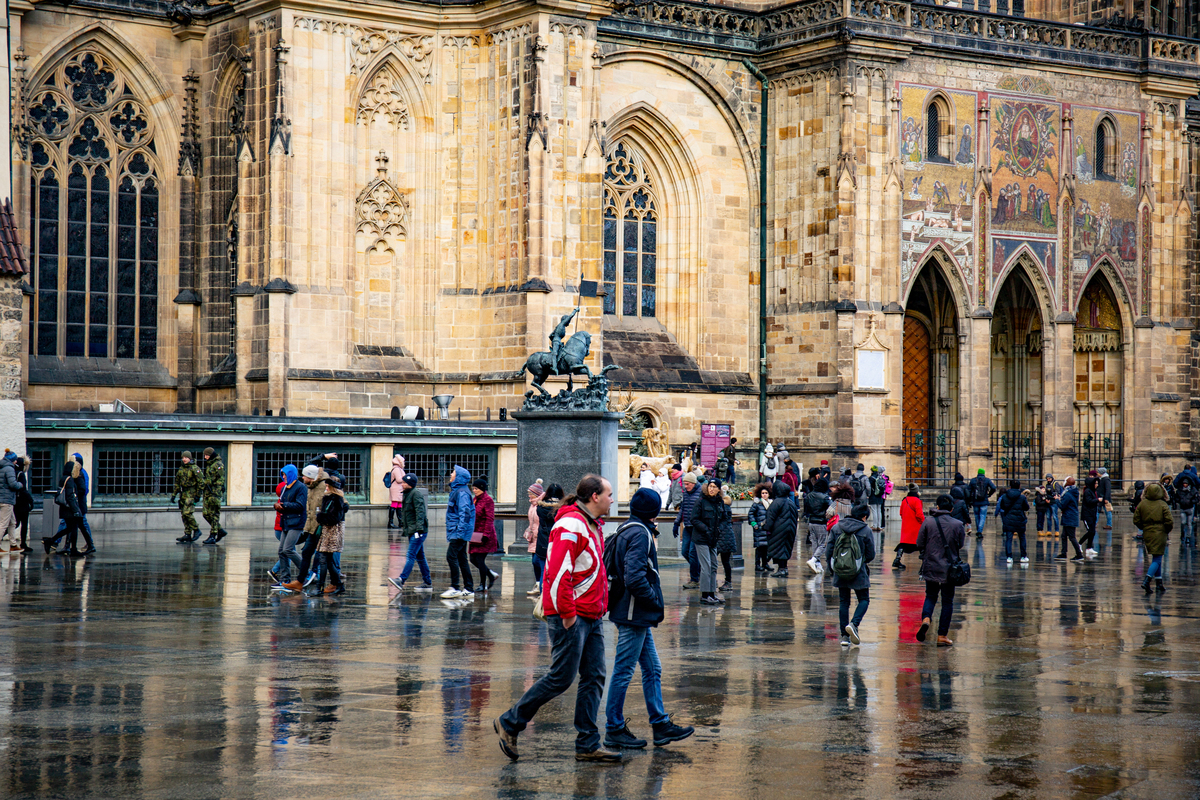 At the exit from the Prague Castle (Pražský hrad) there is an alley of craftsmen – blacksmiths, artists, Zlata street and many other interesting things. 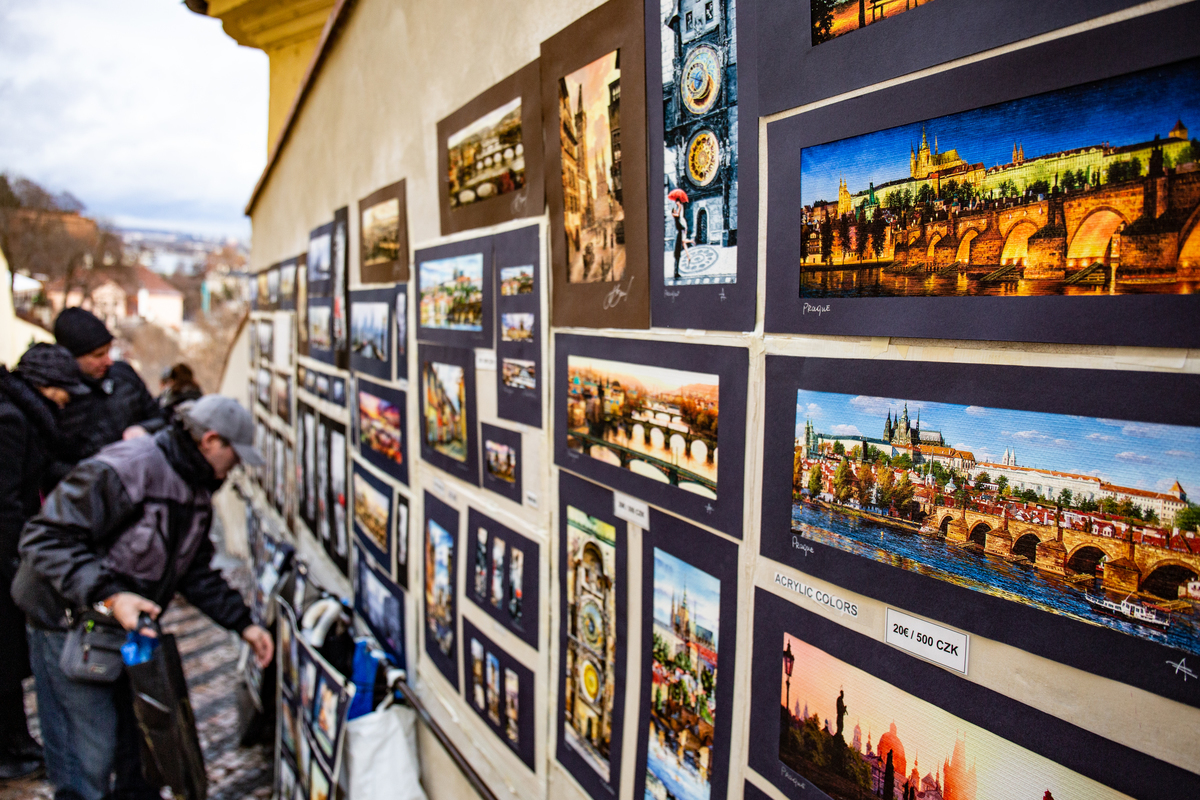 Since everyone except my husband had already seen Prague Castle, and he really did not like large crowds, we went to look for a cafe or restaurant where they would serve garlic soup (Česnečka). As a result, we tried it not in Prague at all)) 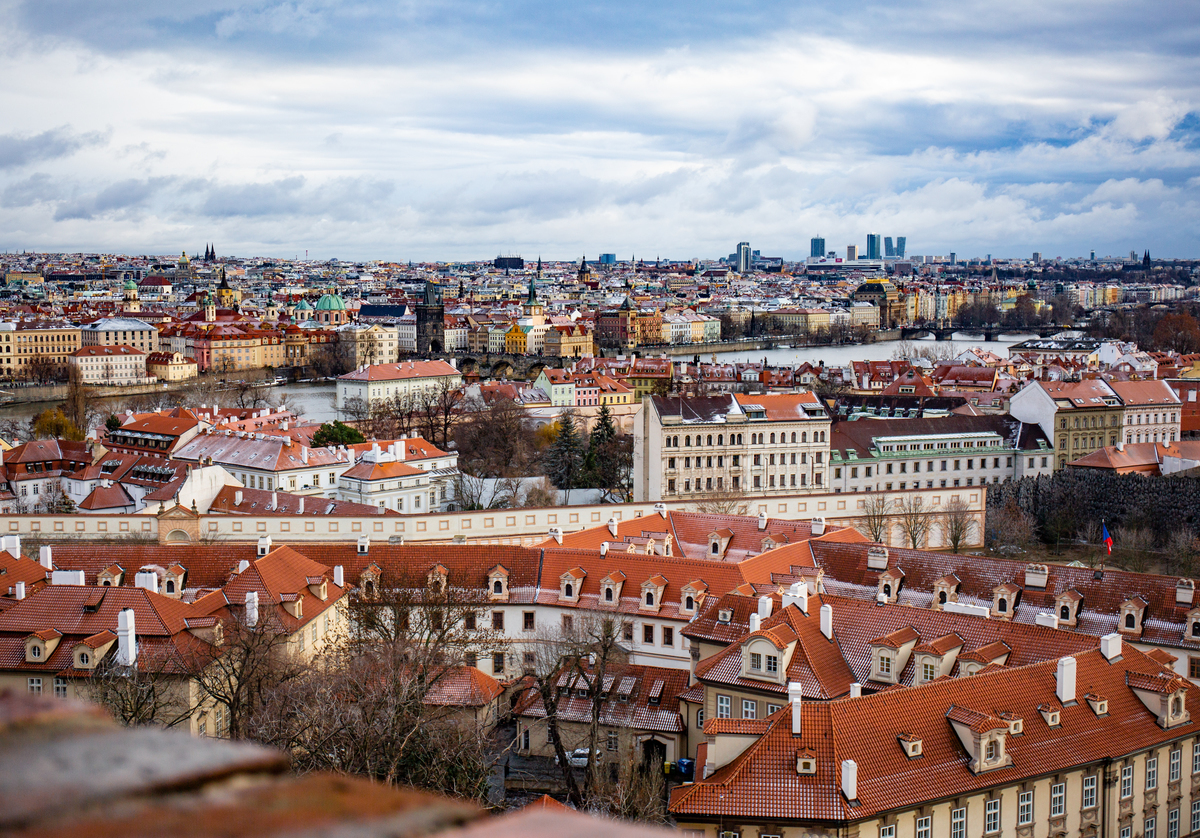 Having stopped at the observation deck, we slowly and smoothly were moving towards the historical part of the city. Suddenly we discovered the Apple Museum. 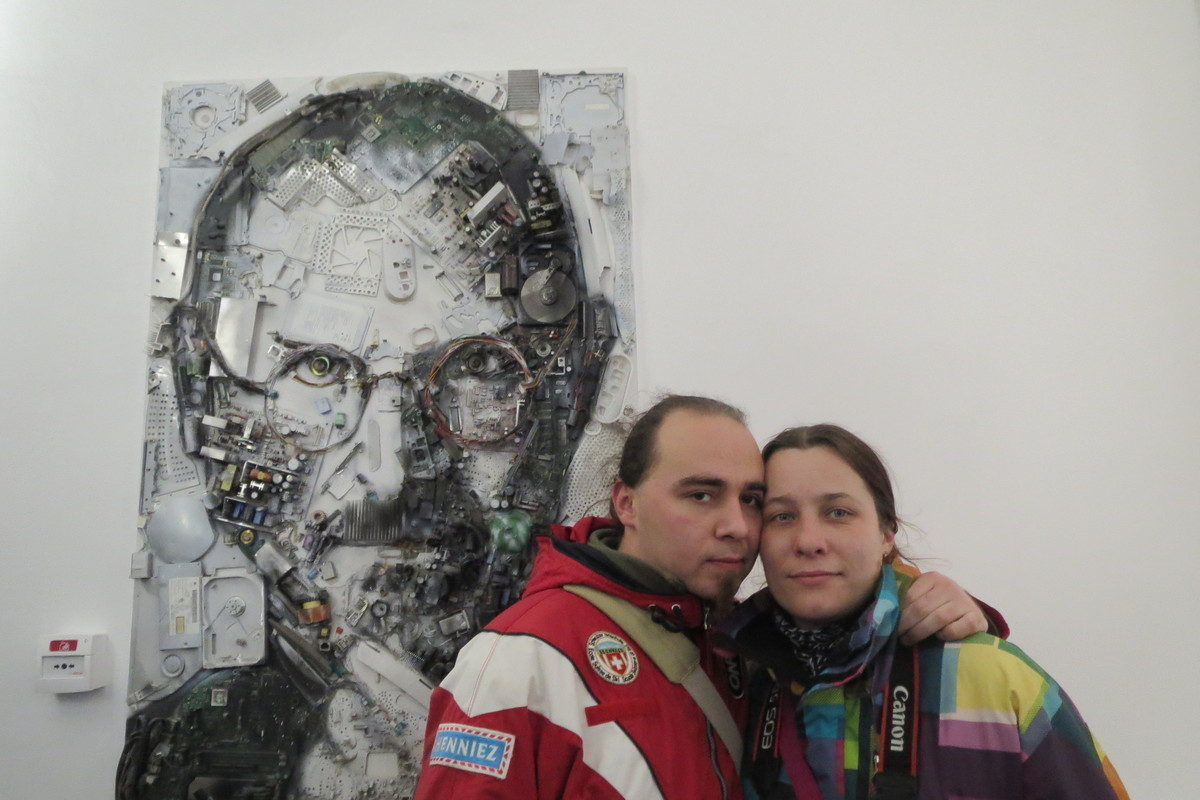 The organizers of the museum tried very hard – everything was collected, from 1976 to 2012. Why not till 2018 – I do not know))) But the exposition is very detailed and interesting.

Difficult to say the name of the streets on which we were looking for a restaurant. The whole “Prague 1 “is a solid museum of old buildings and streets. A huge number of souvenirs, jewelry and other tourist shops, restaurants and cafes. We approached the menu, look for garlic soup, moving on. Several times went around in a circle))) As a result, we went to the most people free place. We did not find a garlic soup. I tried the soup in bread. A very pleasant meal – goulash with gravy and vegetables inside round rye bread.
Then we went to Charles Bridge and look at the big beautiful Prague clock. Although we were supposed to enjoy a small number of tourists, for me there were a lot of them. 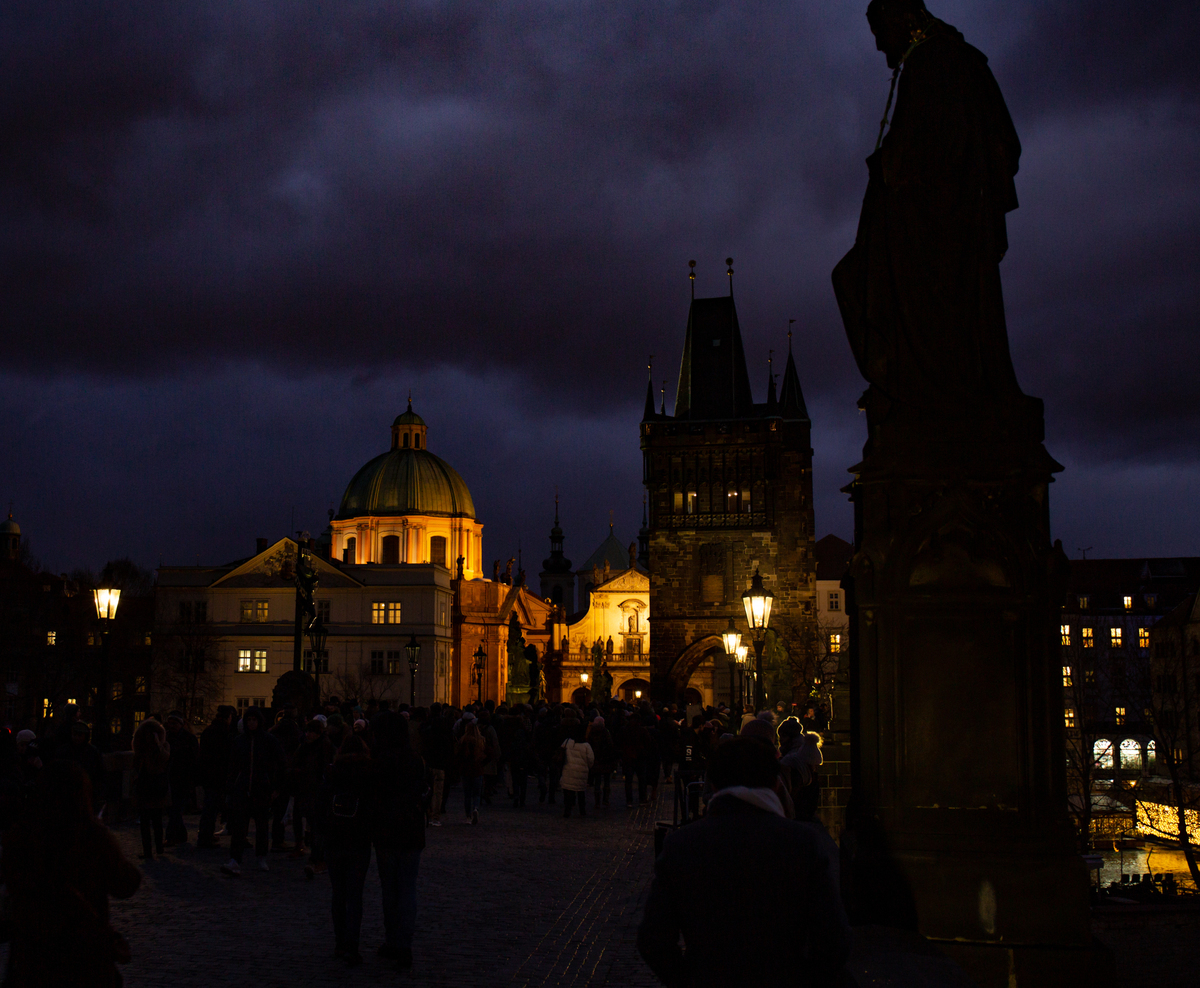 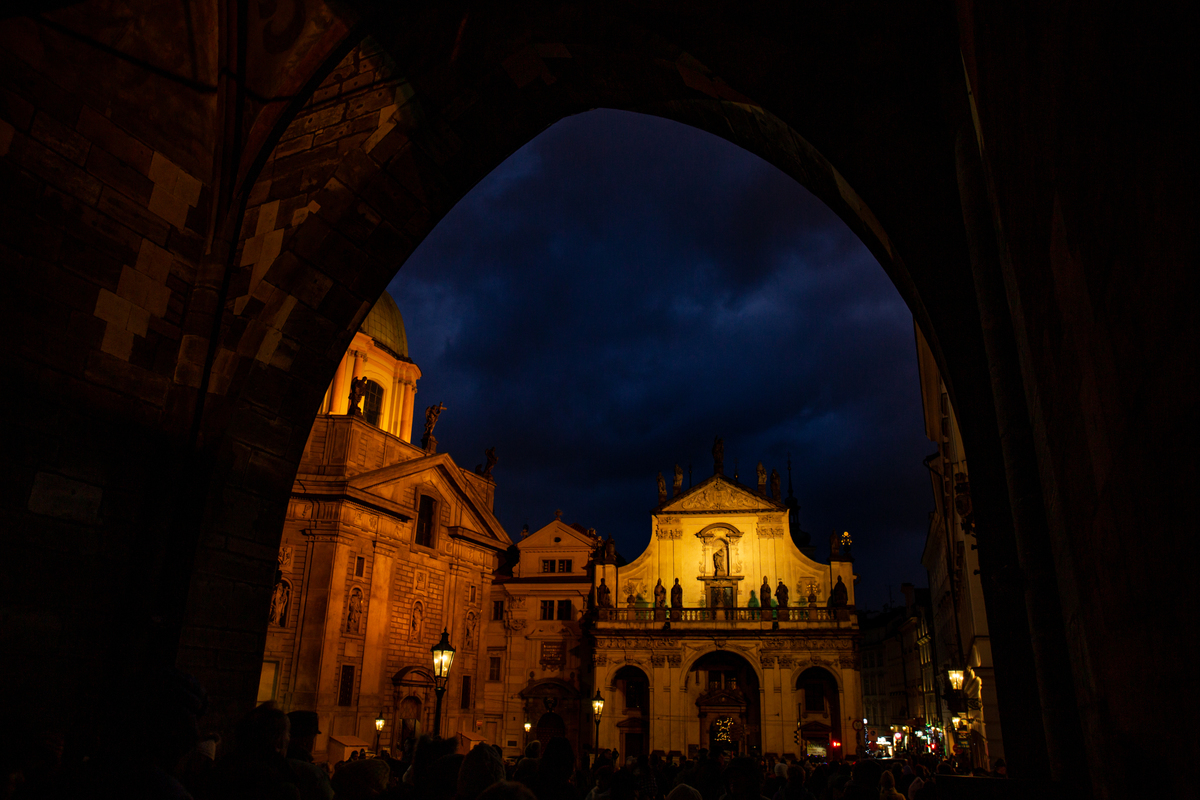 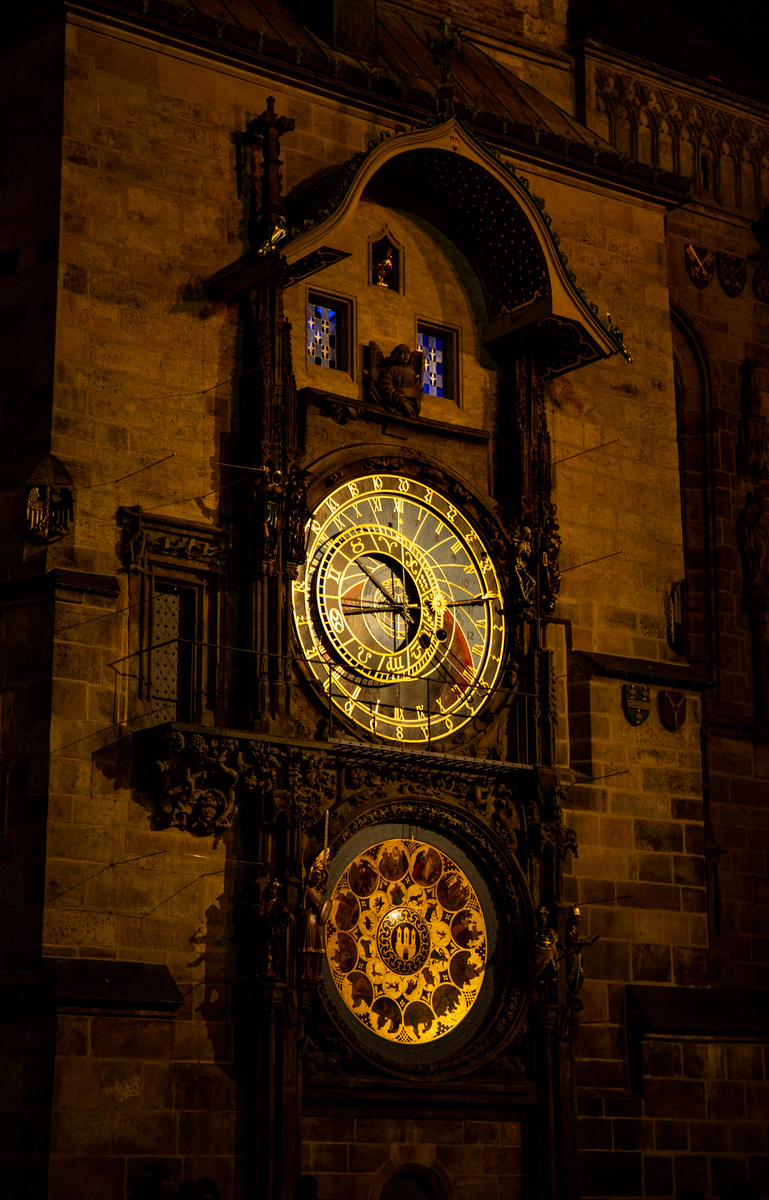 The whole area behind the Prague Clock was occupied by the Christmas / New Year’s fair. We didn’t went there. 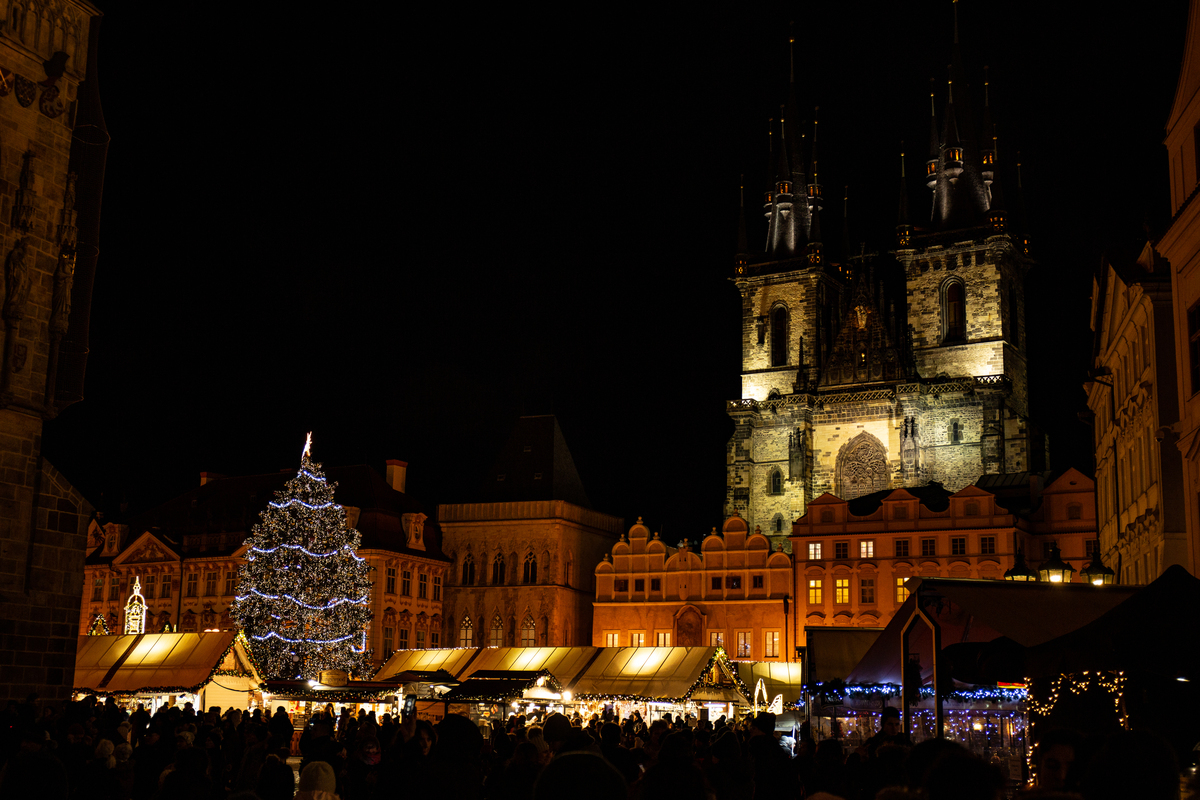 Further, our path layed along the old streets towards the parking lot with our car and to Vodnany – to prepare for the departure towards Venice.