Ha! Those who are afraid of wolves – …
Knowing our expedition Grand Manager’s tendency for hyperbolizing, I’ve decided to set all the marks above the ‘hedgehogs’, that is, to make sure we know all of the details in advance. And, after continuous process of trying to scare us, the road to Lyutivka (yes, the name was definitely hinting us something! ~Lyut’ goes for ‘rage’ in Ukrainian ~tr.) village appeared to have two options for us – taking the bumpy and hole-full asphalt-gravel mix or the alternative one – the “through the corn” dirt-road. It might scare those who haven’t visited Kherson region))) But it wasn’t as bad here)
Our route was almost two times shorter than the previous ones (that is, approximately 200 km) – which gave us hope for returning before midnight))) 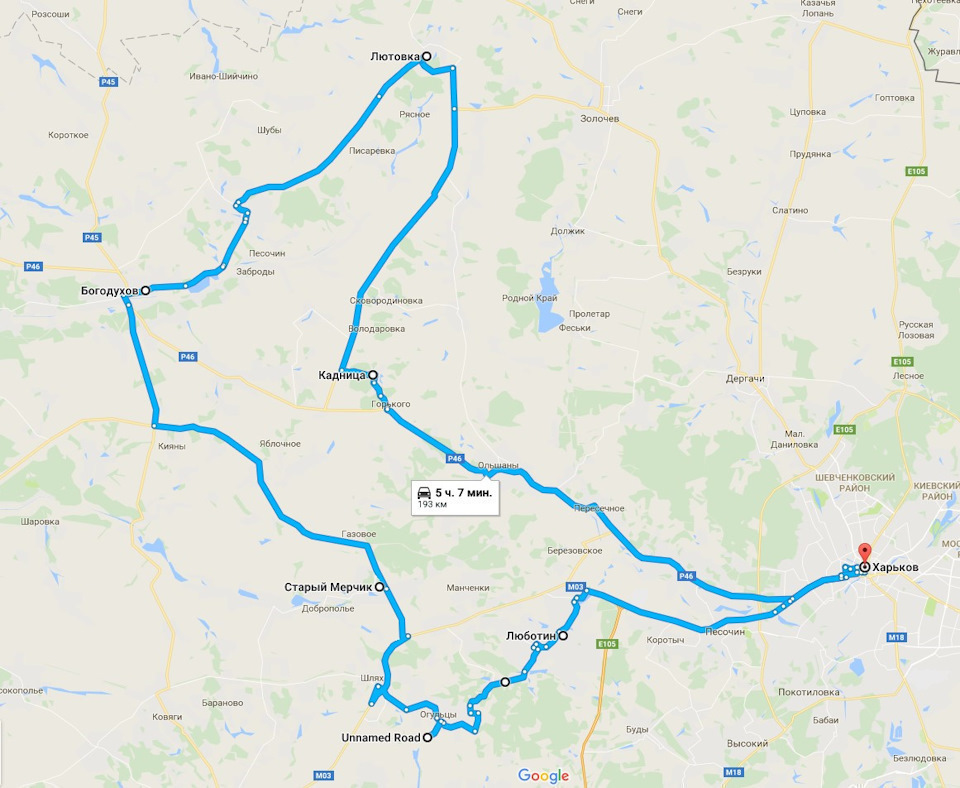 Also, there were three cars this time – the Patric, the Hedgehog, and the Patricia (this time with the owner driving it; it was his first off-road drive!))
So. The meet-up was scheduled for 7.30. What did it mean for us? Gathering up at 5, brewing the tea, waking everyone up:
– “Hello! Good morning! Are you up?”
– “Hmmmm”….
Then – warming the car up, fueling it up and starting off.
We decided to change the routine a bit and stopped at the very first gas-station after leaving the city boundaries for coffee and some snacks. I think it was a good idea – we didn’t have to stop at every gas station later and to look for coffee in the fields ))
The first destination point was Kadnytsya.
The Kadnytsa Manor is a rather well-preserved wooden building that used to host some workshops, seminars and such – which is easy to tell, because the walls are sprayed inside… 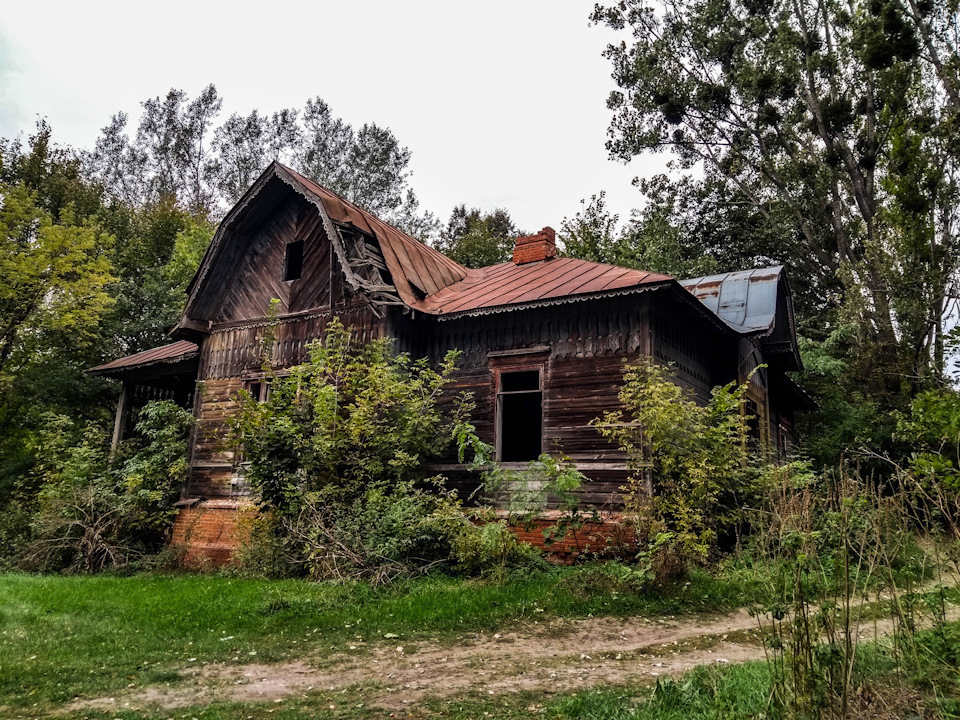 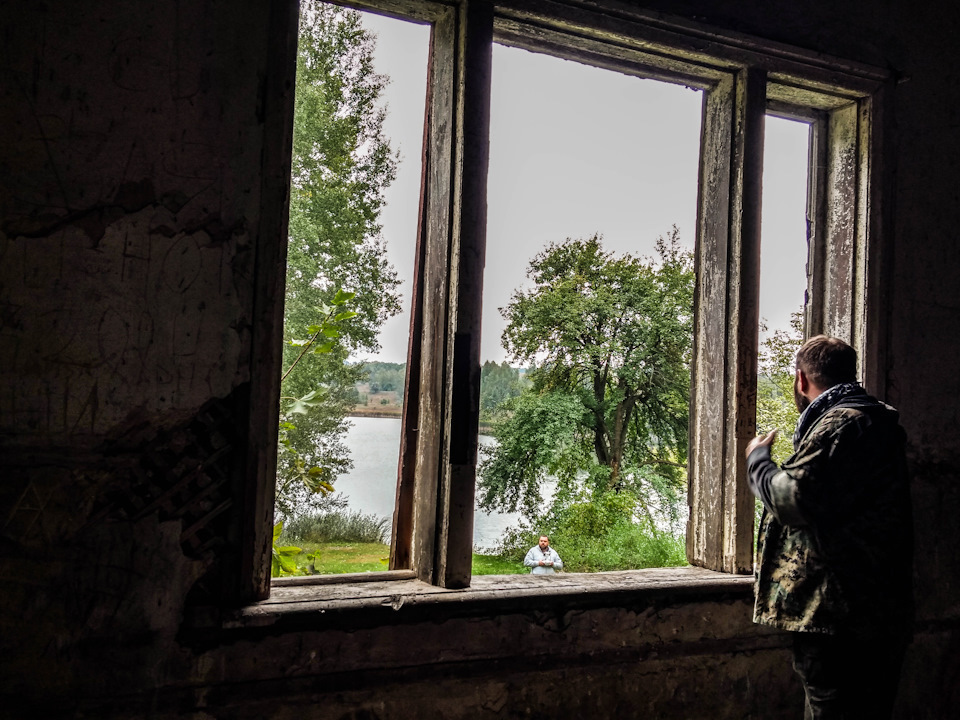 Some historical info: Kadnytsya received its name from Yegor Stepanovych Gordiyenko-Kadnytsya. Taking care about children, the owner of the manor opened a Zemstvo-school (a regional school for non-nobles in the Russian Empire) in 1893.
Some spontaneous moments added up a bit of surrealistic touch to the trip: while everyone exercised their humour skills on the issue of “calling 911 – there’s a kitten to be saved from the tree!”, the one mentioned was happy to spread some positive and sarcastic vibes: 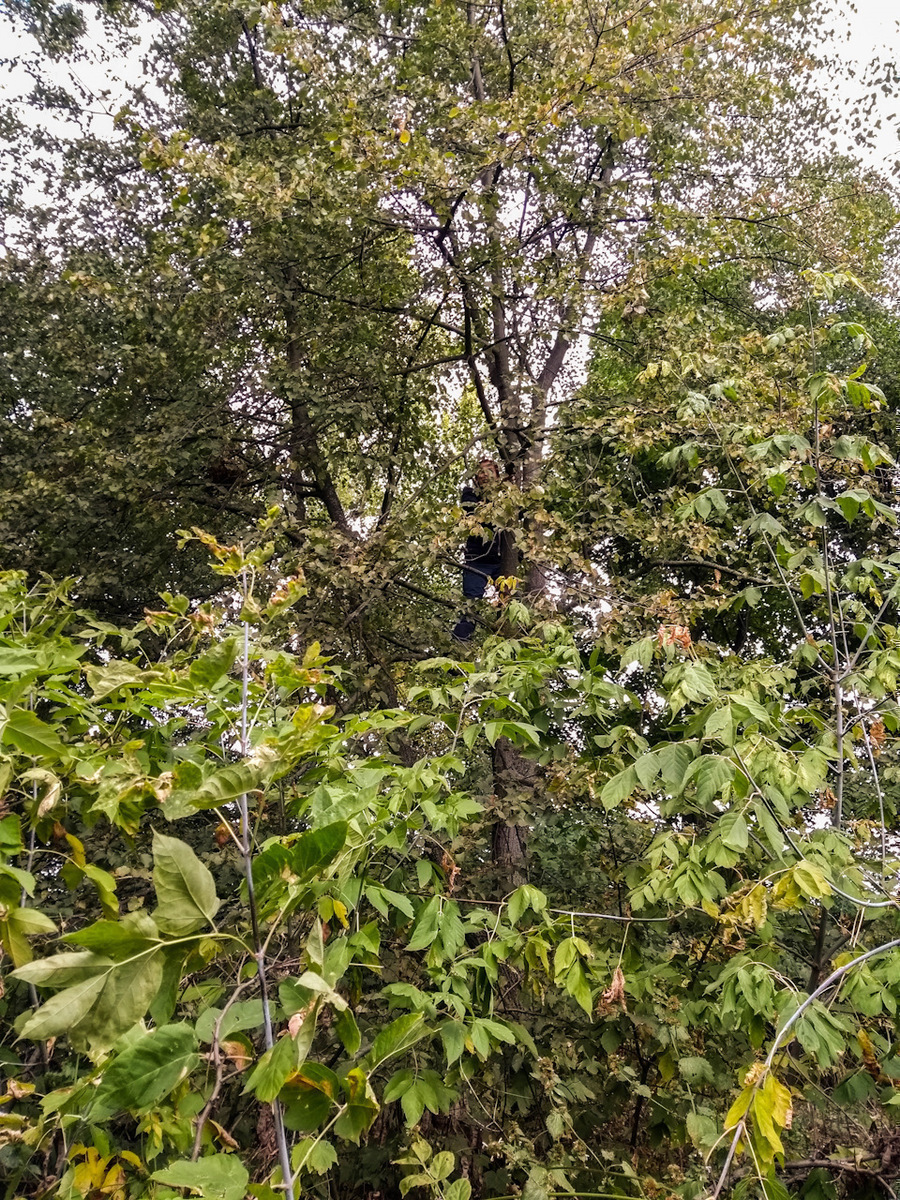 Inna was looking for the best shooting angle up there))

Later we went to the dreadful Liutivka – and we had to get there by the ghostly roads. We’d decided to try out the “assphalt-gravel terror”. Well, I’m not sure there’s something bad enough to be scared of after Bohodykhiv and Akhtyrka. But the fact of a nightmare effect really was present.
The manor was grand and terrific.
Some of the locals passing by told us something about “their village club” 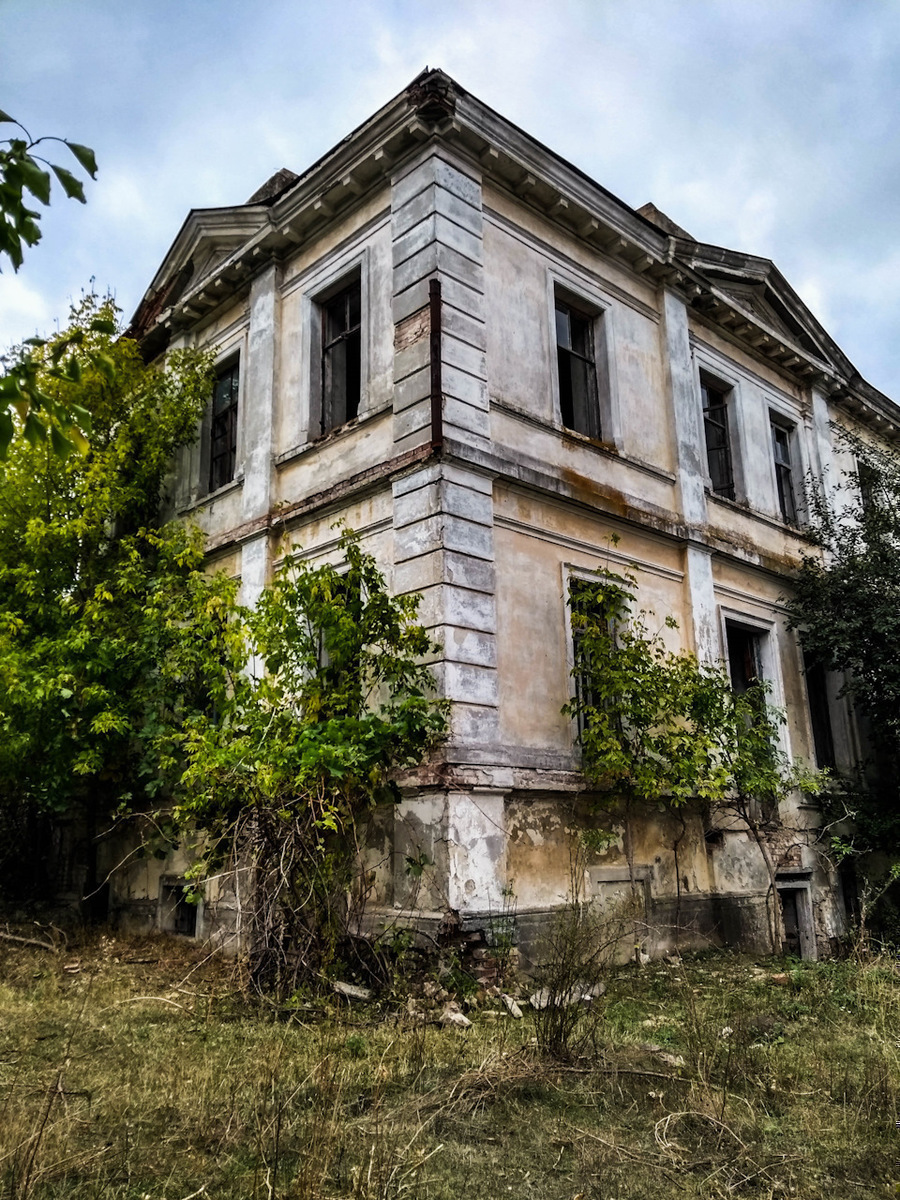 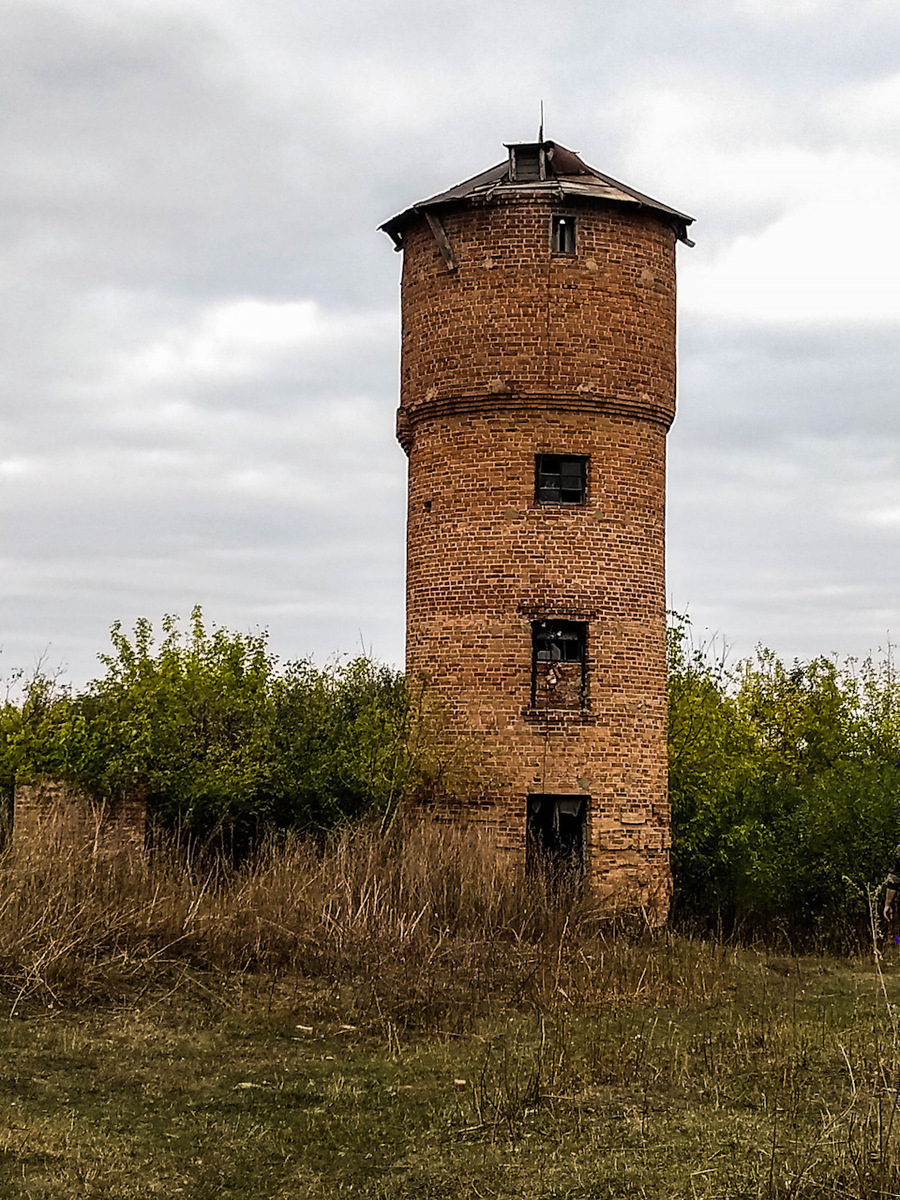 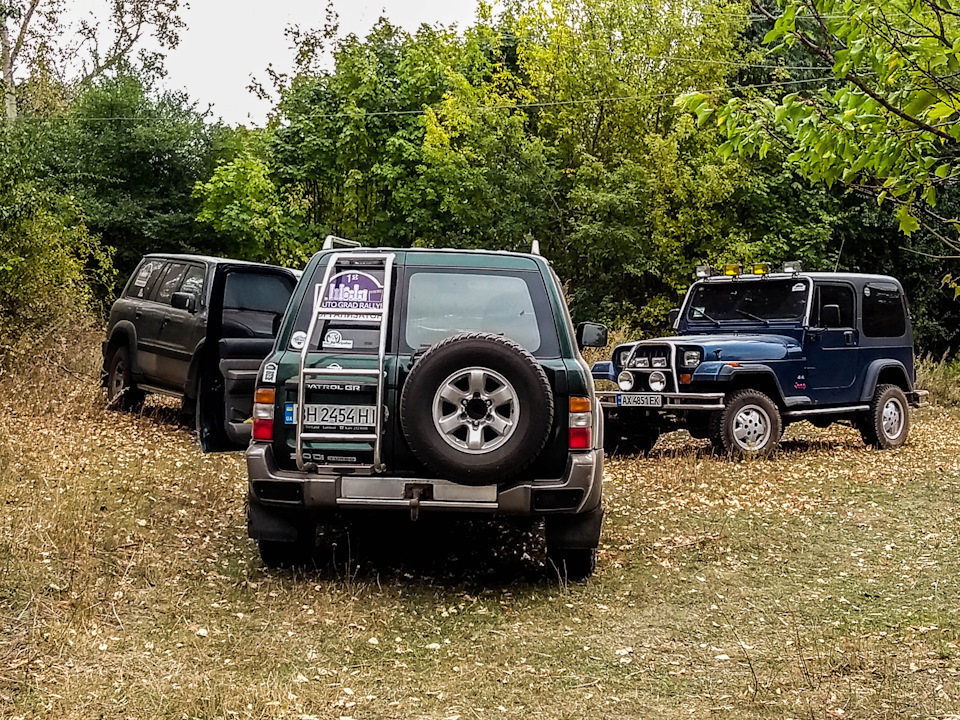 All the band’s awaiting 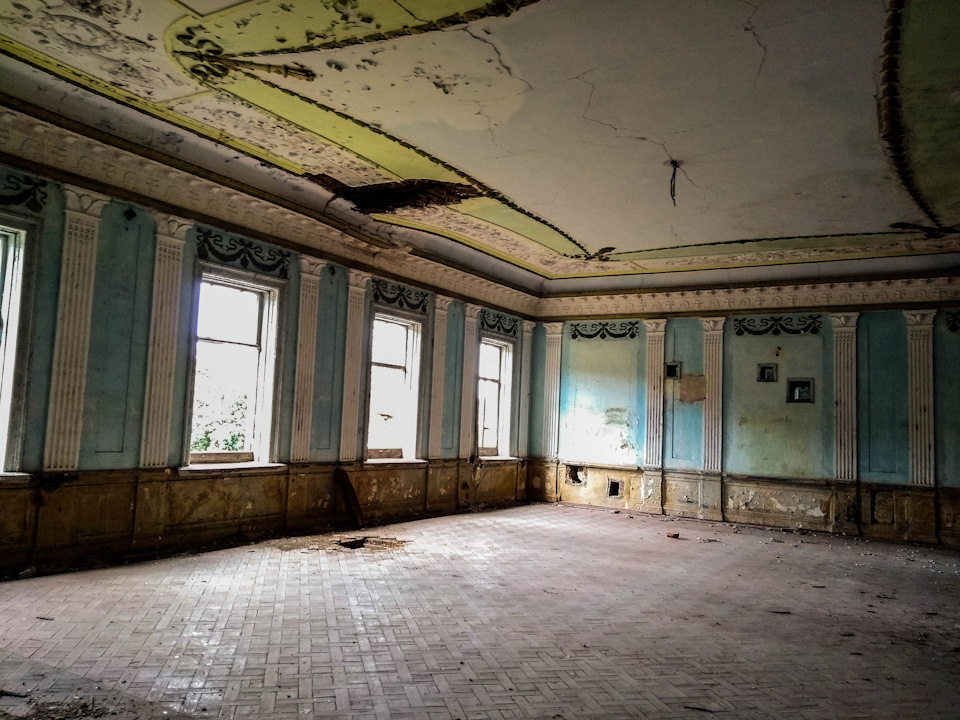 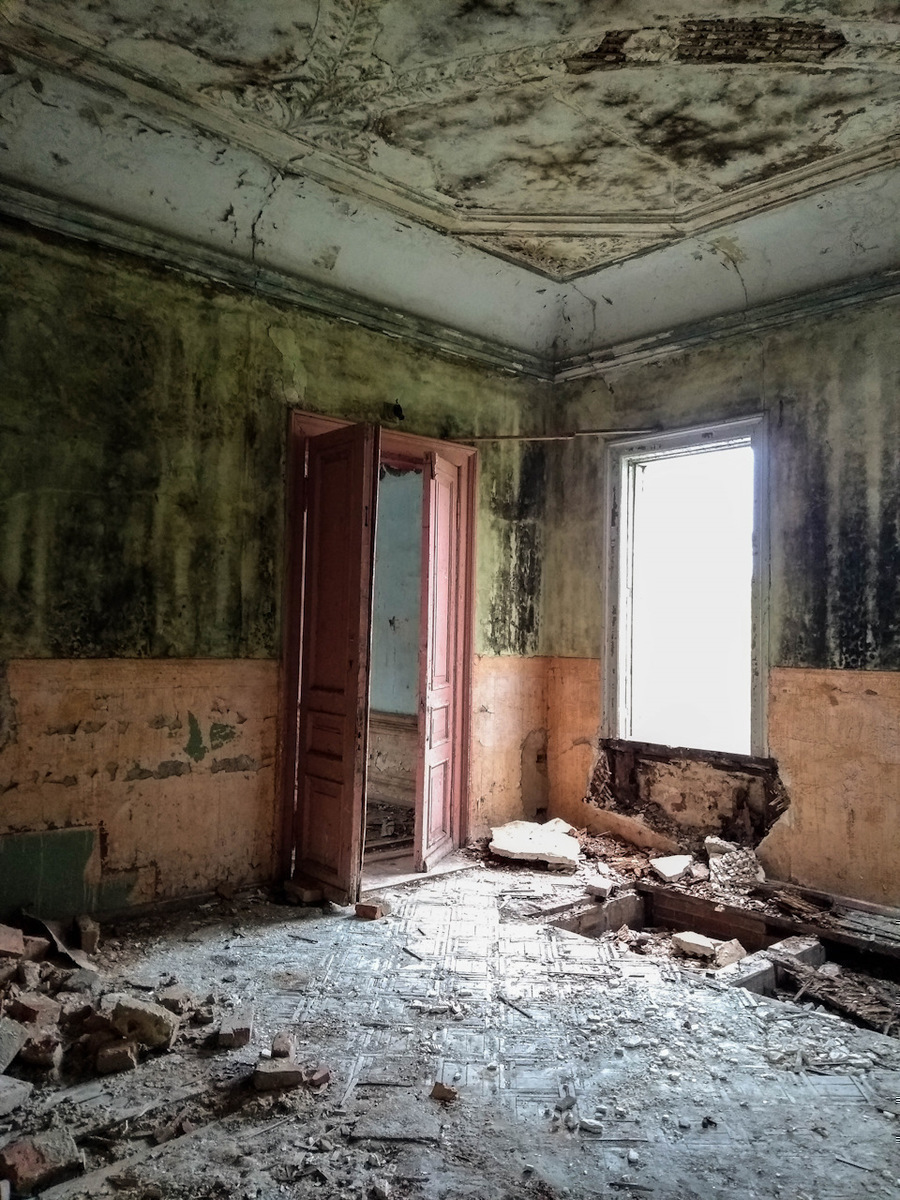 A pitiful and dangerous condition 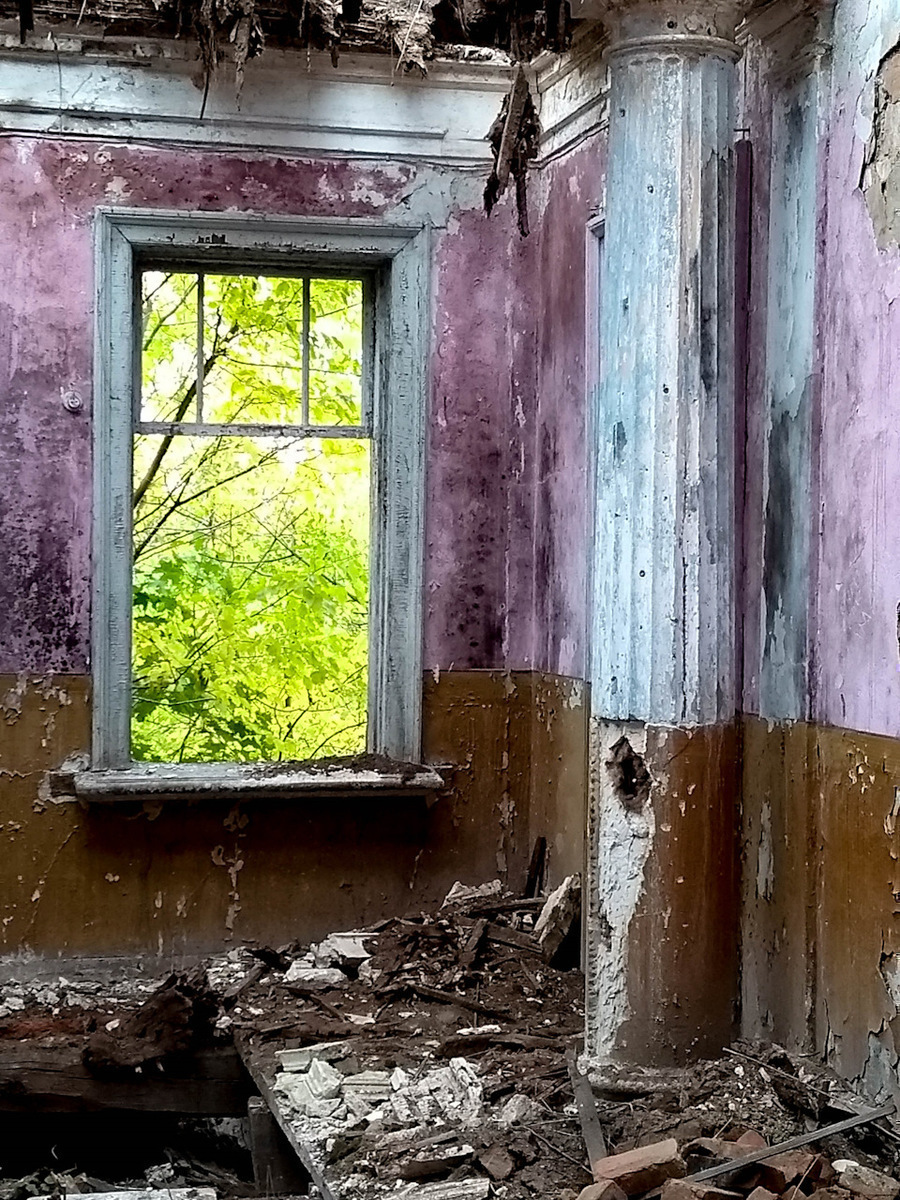 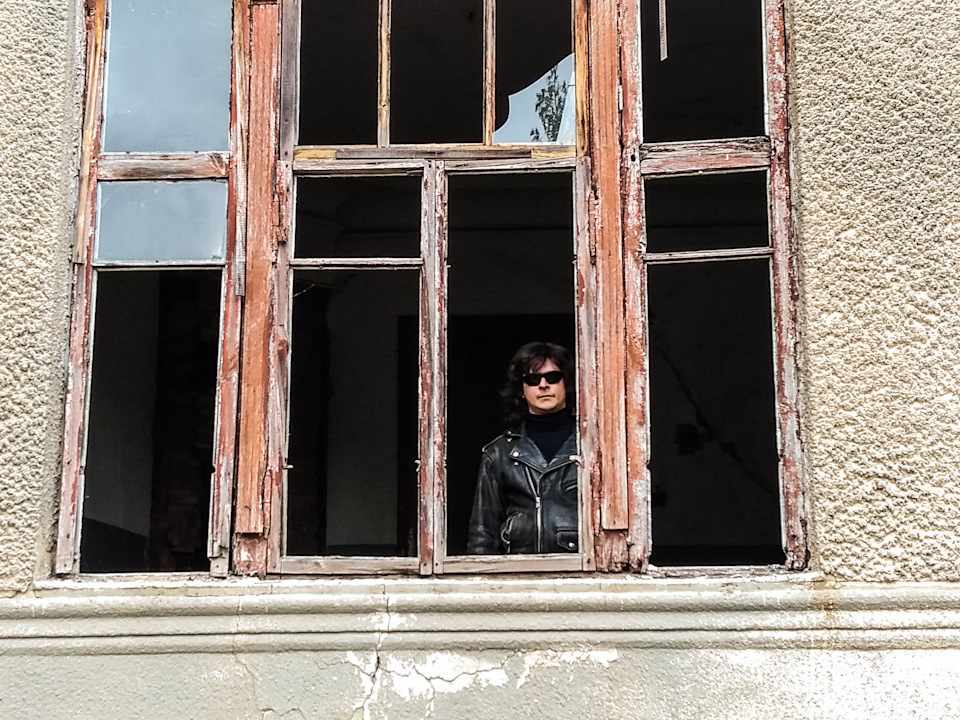 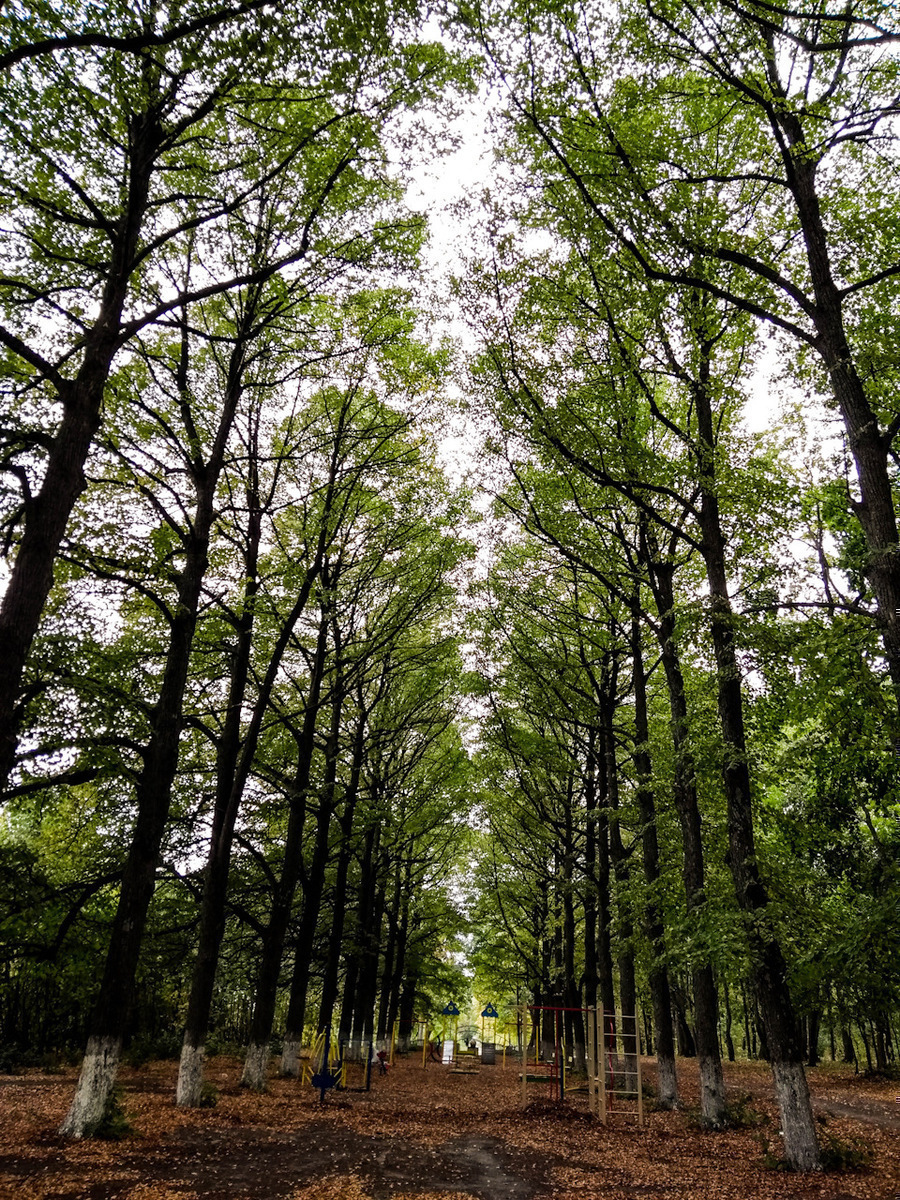 There’s a park next to the manor

This time I took the GoPro with me and filmed a bit of the manor – we’re planning to do a bit of correction and editing, and post it up later. 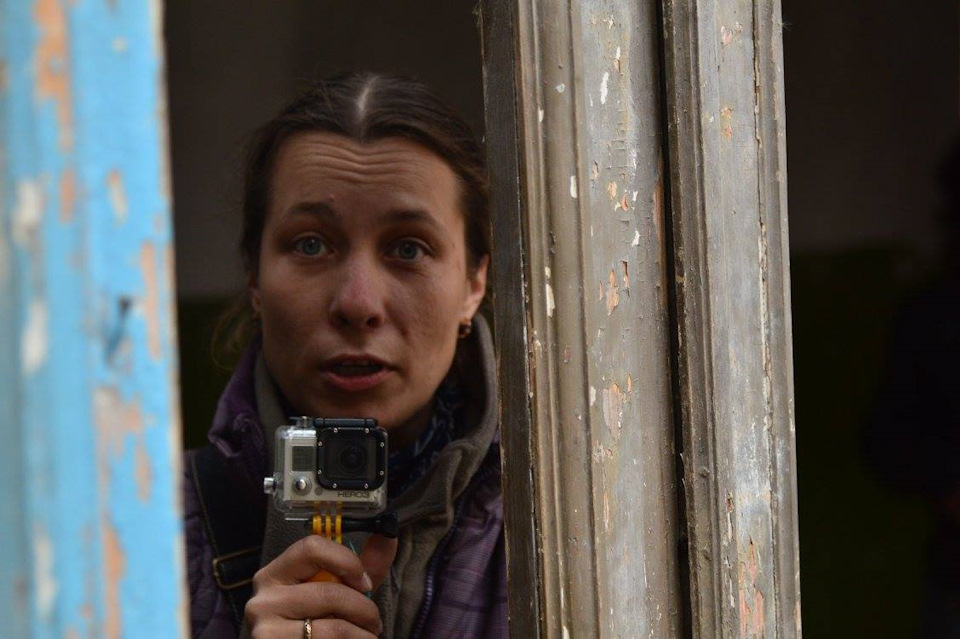 There we were trying to figure out – could we afford having some lunch, or should we wait for the next stop)) our favourite theme it is))
We’ve decided that it would be a nice option.
A beautiful meadow was found: 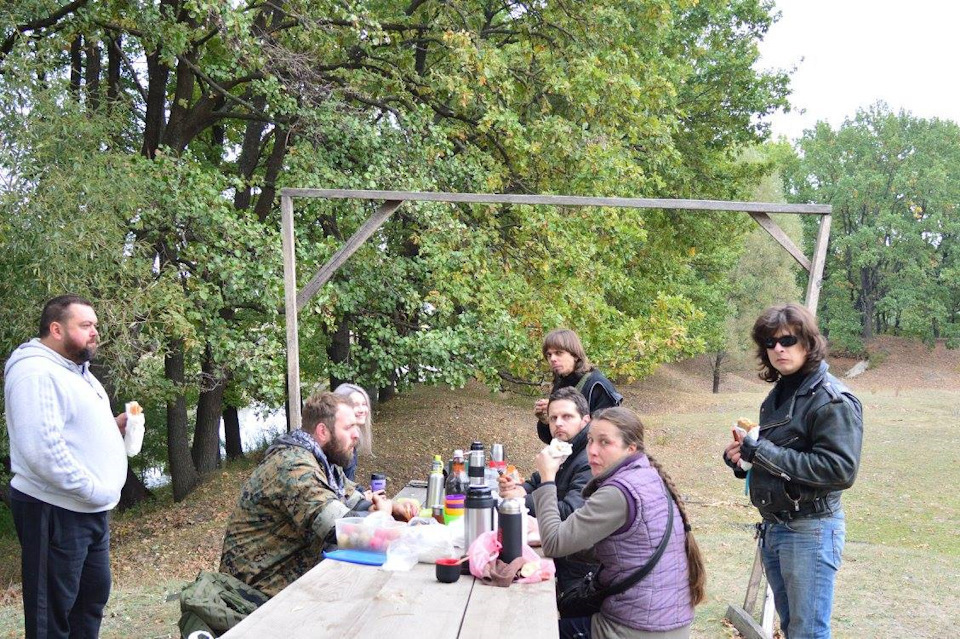 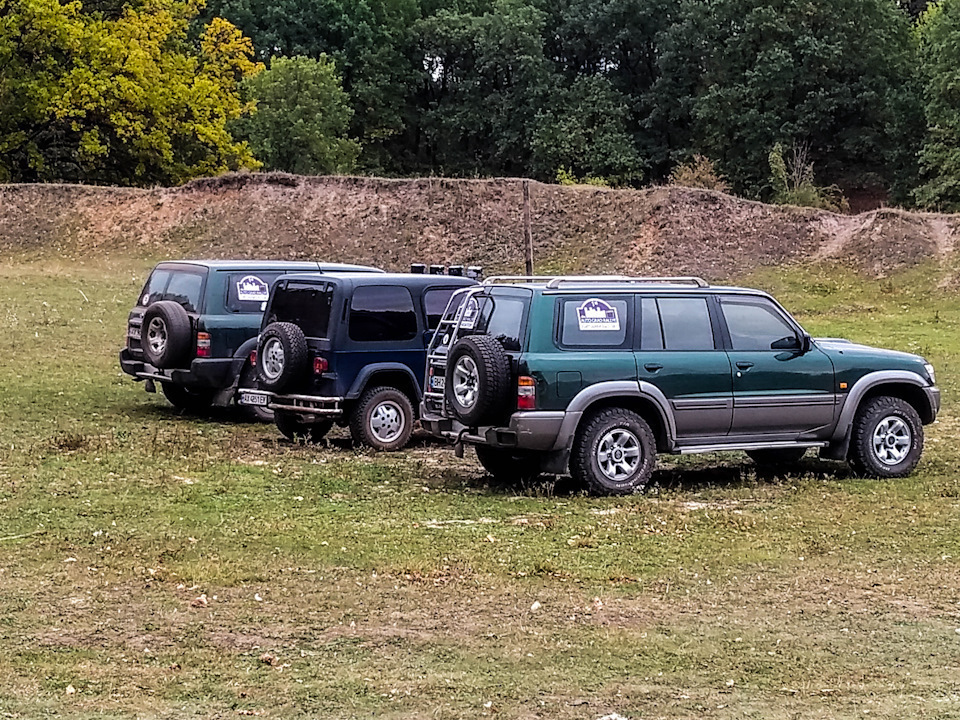 We had a walk around after lunch, and decided to move on)

The next stop was Staryi Merchyk – the Shydlovsky manor (later called the Dukhovsky manor) of the 19th century.
We started off from Liutivka and began turning some odd direction. As a result we came back to Liutivka))). OUr team decided to head the car line, and it came out to be great!
Firstly, – Dima appeared to be a great navigator; secondly – he knew the places around pretty well even without the map; and, thirdly – we didn’t have to swallow the dust!
The road was rather nice – there was a well tramped black soil, unexpected sharp turns (and some sunflowers’ death caused by drifting) and, – as a cherry on the top – a hill all of a sudden! Right in the middle of the field there was the hill which resembled the chalk one in Mogrytsa – ahoy!
It was too late to stop, there was no time for thinking – because the two beasts behind me were hurrying up towards me and were not likely to notice me because of the dust clouds if I stopped.
My sweetie was strong enough to fly up there on the 4th shift, and it started losing the REVs on the ridge only. Honestly – that was scary. But we did manage it. And then we all shared our emotions about the hill – it was even more unexpected for the rest of the team, – the dust was very thick, and all that could be seen was my lights (by Patric) and Patric’s lights (by Patricia) heading towards the sky! We should give the credits to all our passengers, too (either they’re used to it, or they trusted us))) – they lived through the road surprises with quiet dignity, clinching into whatever surface was suitable for it))
To make it short – we loved it)

Staryi Merchyk – is an odd place. It seemed quite normal on the outside – a regular old building… but it felt really freaky inside. 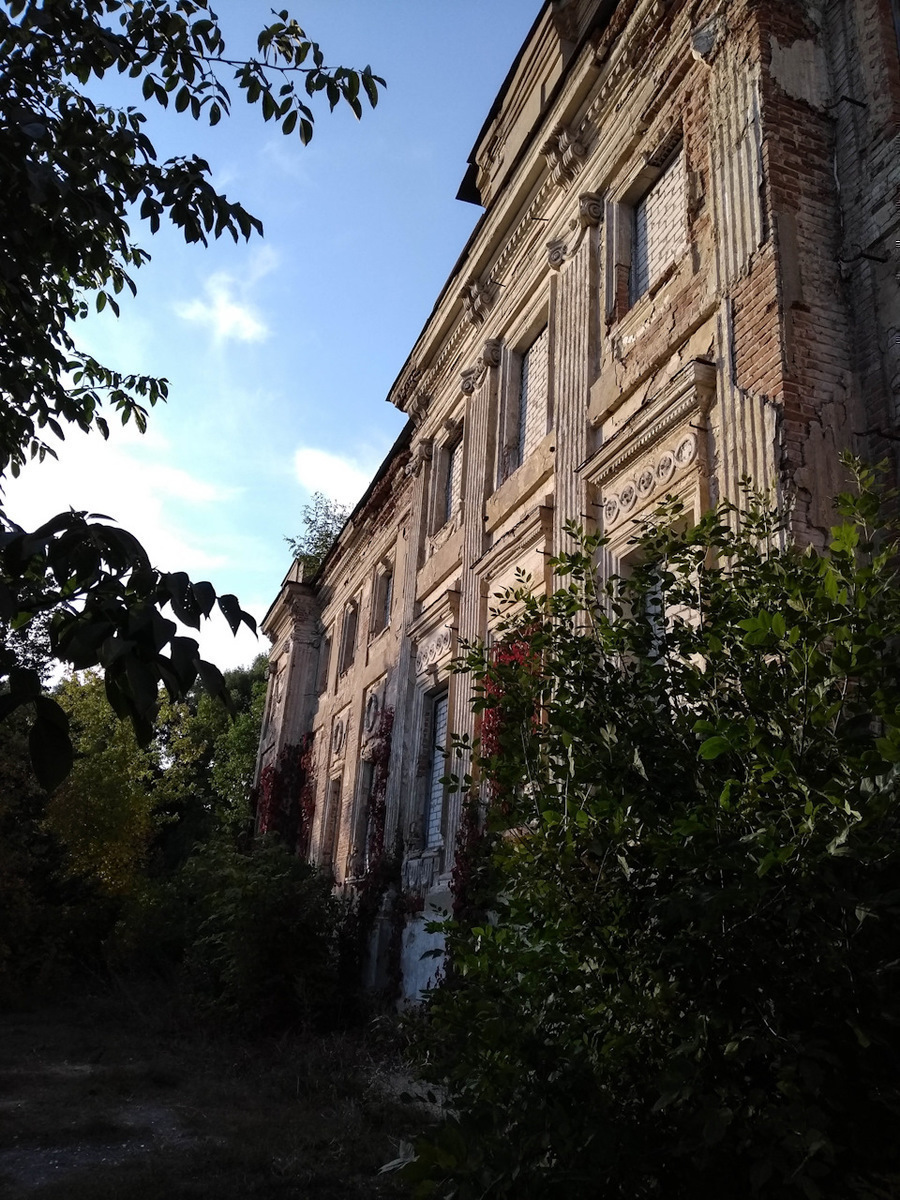 As someone said, the ball room seemed to still hold the music… I don’t know what it meant exactly, but I still have goose bumps on my skin – from this freaky sense of music “still-being-played”. 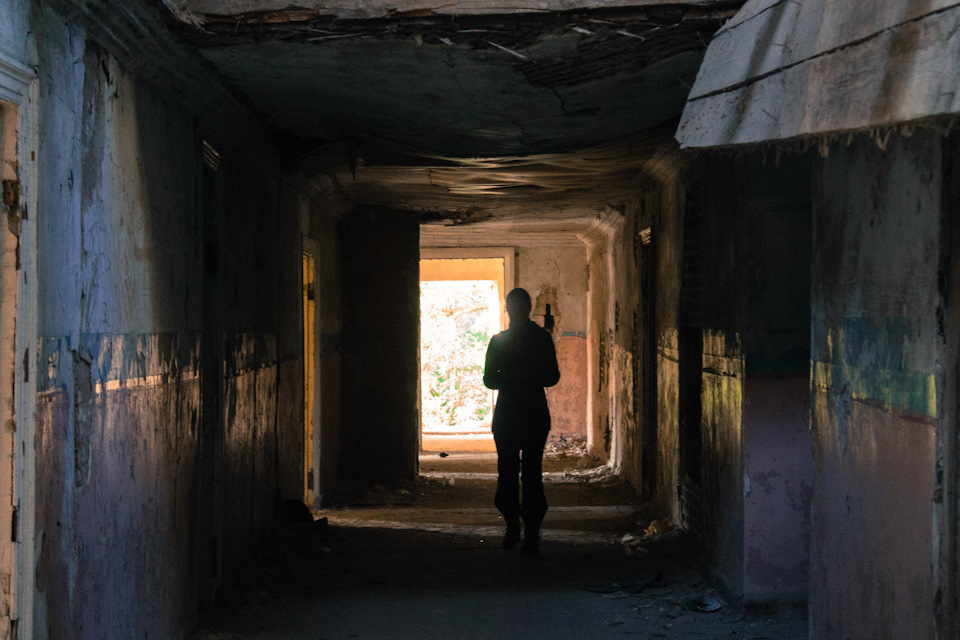 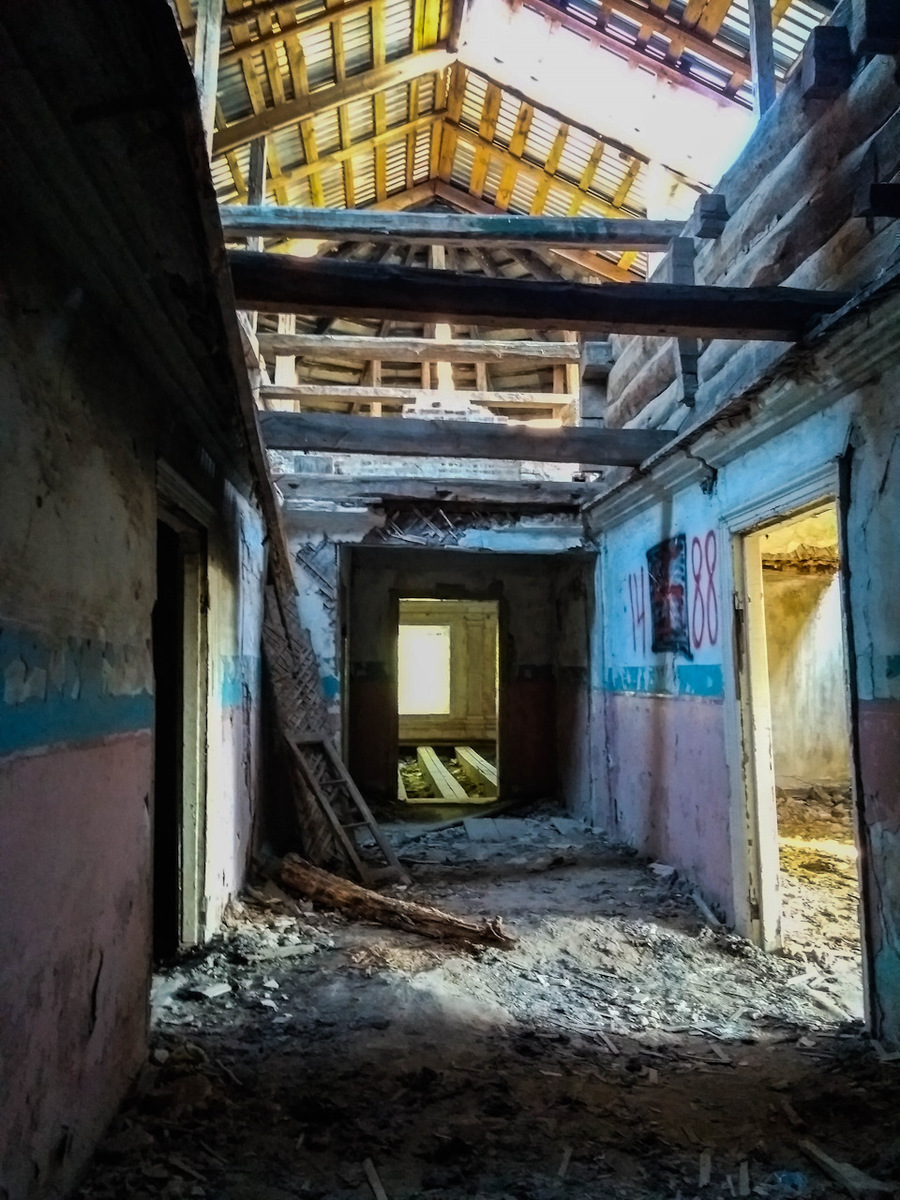 One may get there by the basement only. All the windows have been sealed, everything’s dark, squeaky, grumbling and falling apart… Creepy.
The next part of our program was behind Oghultsy – “Obelisk dedicated to Colonel K.M. Pevnyi, 1916”.
We decided not to take chances and take the lead again, as we had coped with it pretty well the previous time). Usually, everyone had to wait while the front car threw a coin to decide which way to go, and then took the opposite direction in 100 meters)))
The monument we were looking for was lost in the hills – there were beautiful places around it, and only the hints of the roads were present, like slightly laid grass on the side of the dirt road.
We drove around a bit and did find the monument in the end: 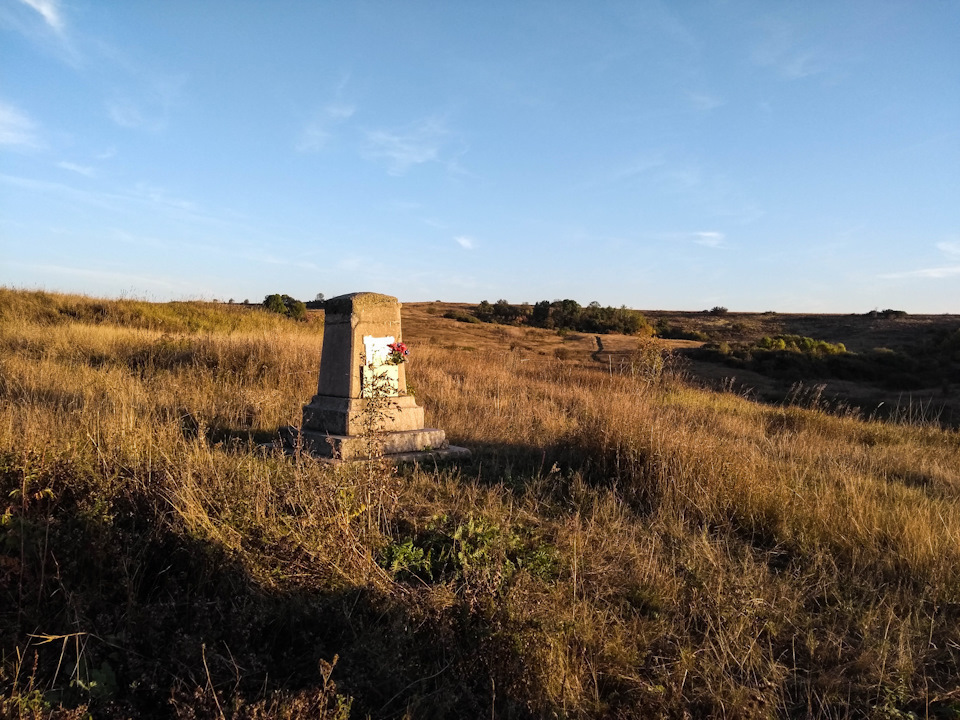 This was the place where we had a choice to be made – whether we would be able to get to Lubotyn before the dark.
We decided to attempt it)
Dima and I set the short route))) and asked everyone if they were sure about being ready for “shortcuts”. Importantly, the GoogleMaps told us the way was 15 km shorter, but 20 minutes longer )).
And we took the short one.
There was nothing new on the road – some tramped black soil, sunflowers, pits, bumps and the rest of the lyrics.
Luckily, we did manage to be there on time – the GoogleMaps didn’t know what we were driving). Well, at least we were on time at that specific dot marked by our dear Grand Manager. But it was not the manor))). After the time it took us to rethink the situation, remodel the route, and spend some time driving there – it did start getting darker. So we didn’t make a lot of photos. Trying to use the cars’ lights didn’t help us to succeed, either.
In Lubotyn we took a look at the Maslovychi manor (later known as the Prince Svyatopolk Myrskyi’s manor) of the 19th century. 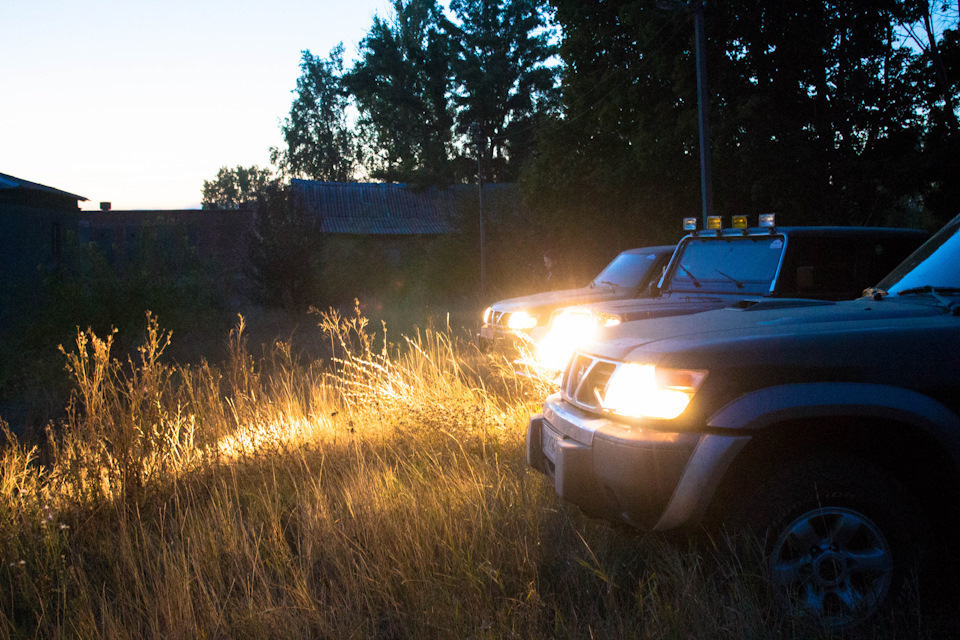 We don’t have the photo of the manor itself((

This time we returned to Kharkiv in the fastest time recorded – at 21.30! This was incredibly satisfying for us)