Old mills of Ukraine. Part 4. Fake windmills and a bit of surrealism.

After we had a great breakfast, we set off on a journey. Today we planned to visit the only (supposedly) windmills in Ukraine. Well, and some water ones.

Our first stop is not far from the Bila Tserkva. That was Pugachivka. 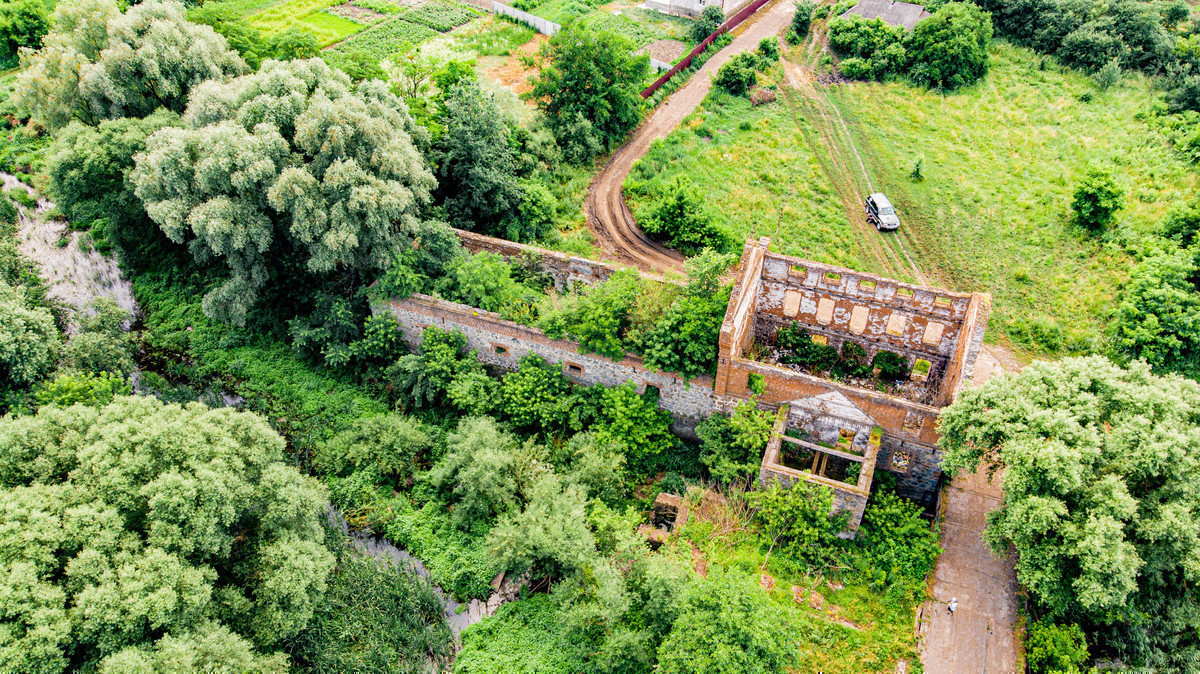 The information I have found so far is limited to a couple of paragraphs. The water mill was built in the XIX century, and in 1909 it was significantly rebuilt. Although in some sources the year of its construction is stated as 1909. Information also differs about when it stopped working. In some sources, this is the 50th of the last century, in others – the 90th. Anyway, there is almost nothing left of the building at the moment. 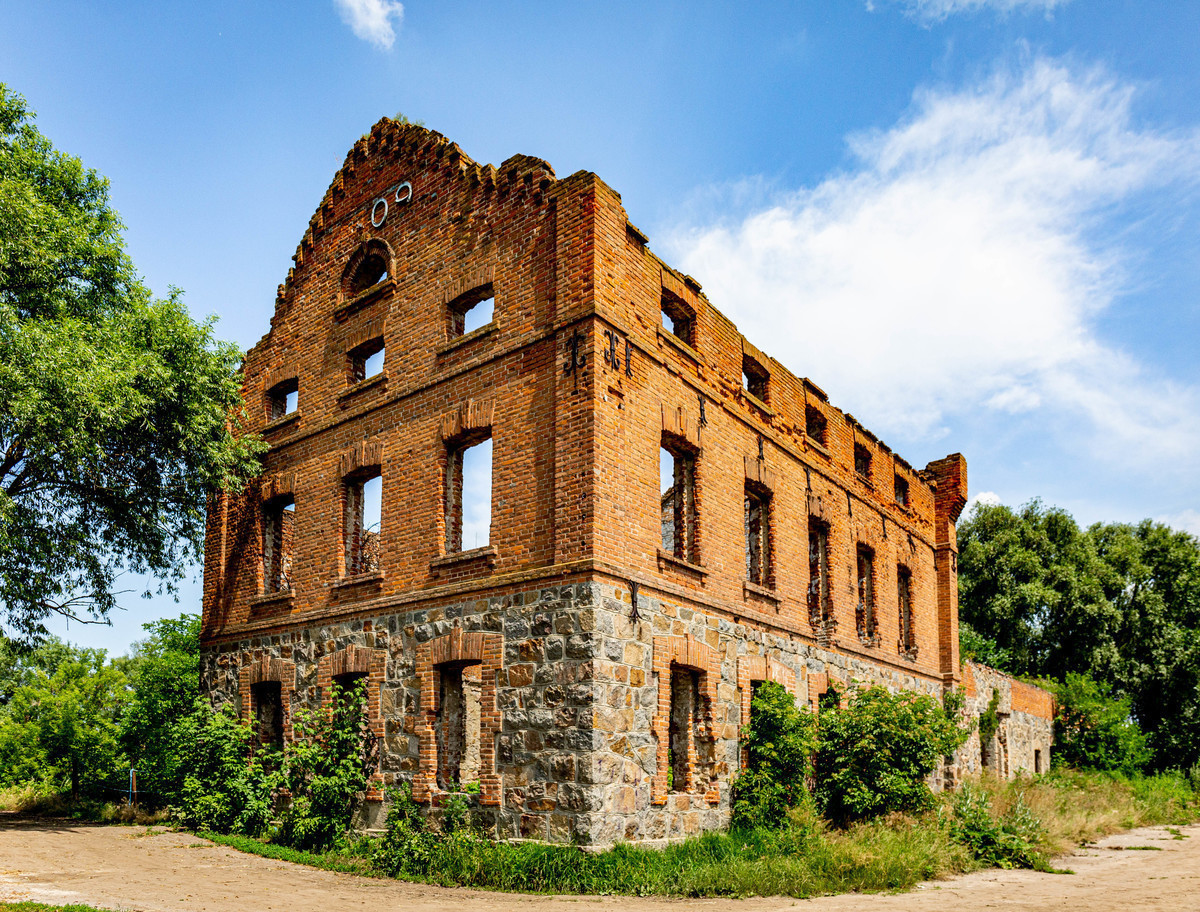 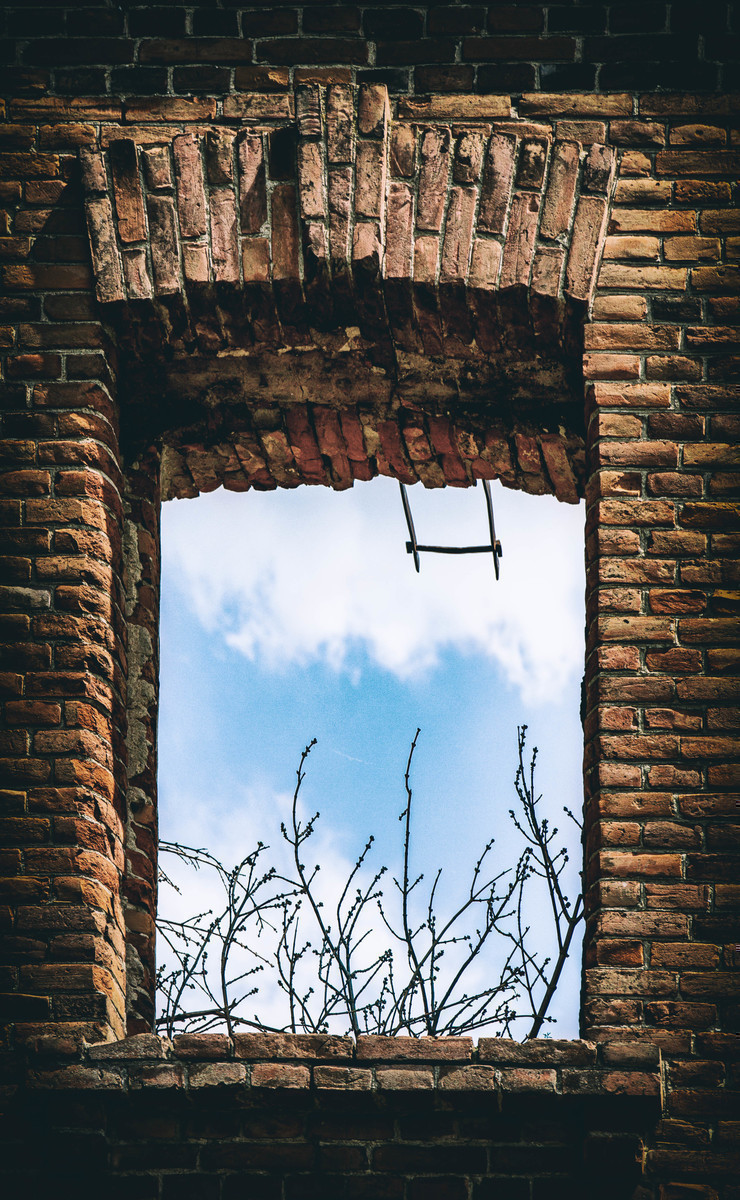 I will try to find more information about this place.

Our next item is Sinjava. The mill in Sinyava has been converted into a hotel complex a long time ago.

Officially, the first mention of the village dates back to 1550. But there is a chance that the settlement was here much earlier. The water mill in Sinyav was built at the beginning of the 19th century, rebuilt in 1904 by order of Count A. Branitsky, the master of the Belotserkovsky eldership. At the moment it is an architectural monument of local importance. In 2015, the hotel-restaurant complex “Old Mlyn” was opened in the reconstructed building. 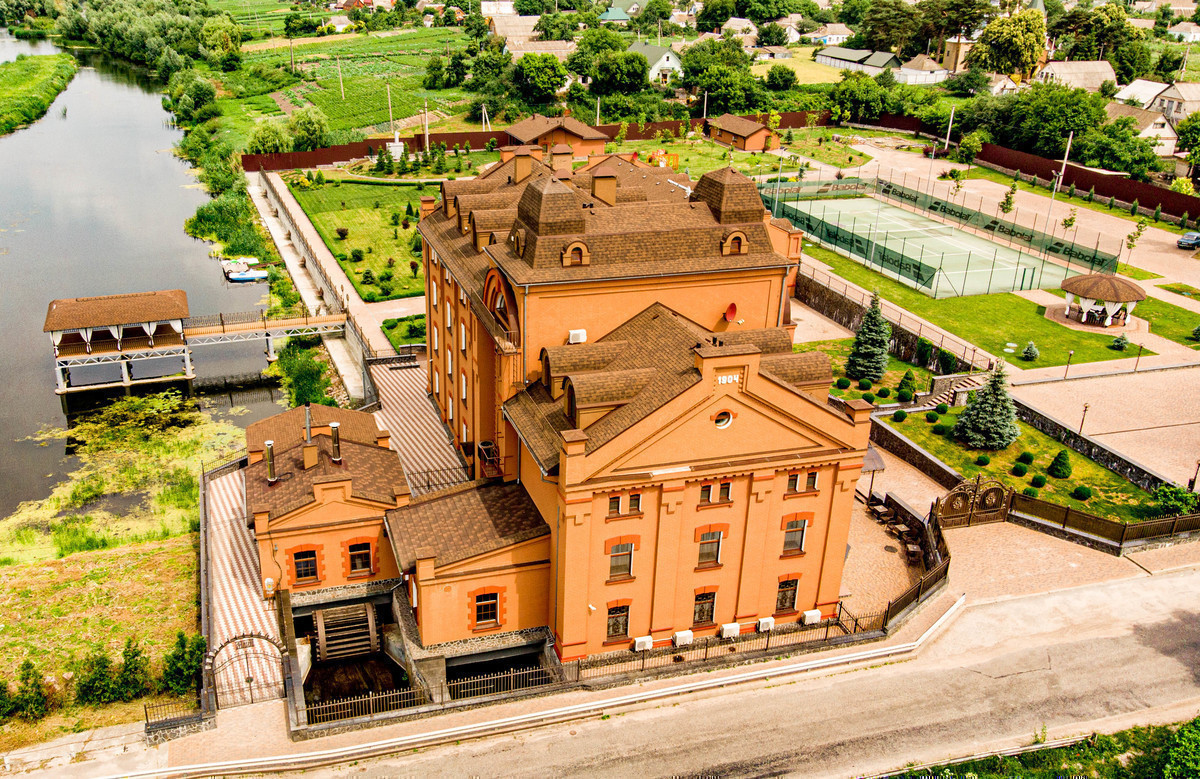 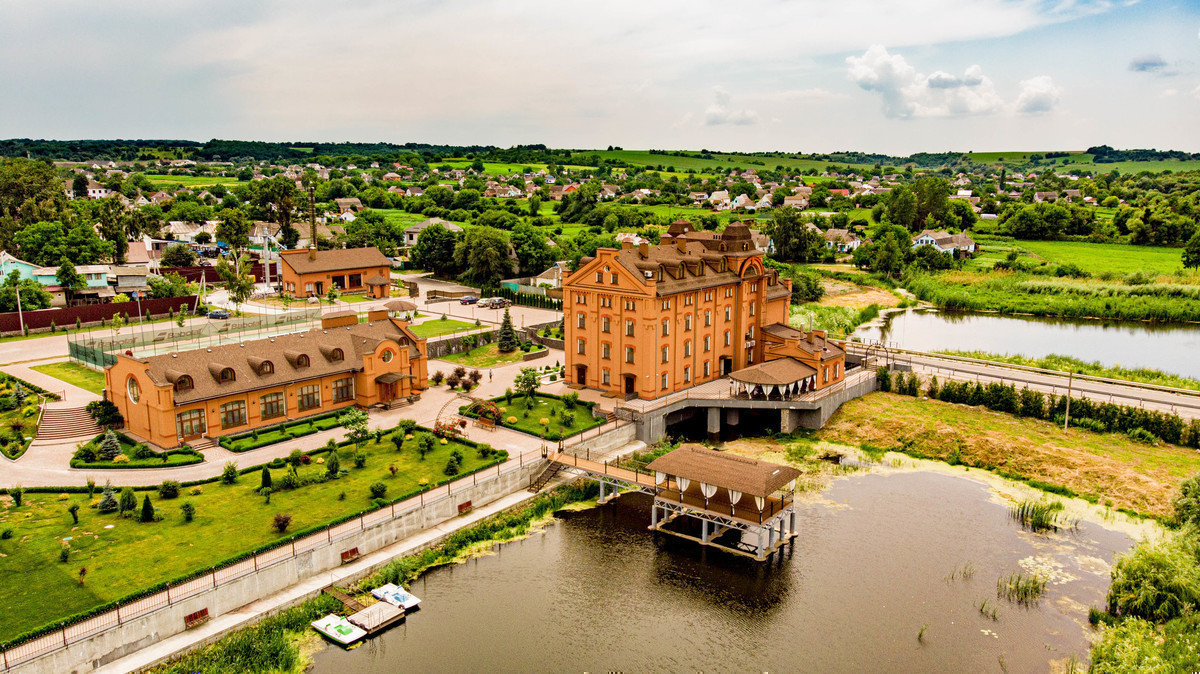 We drove into the territory quite freely, unloaded and went shooting. No one said a word to us. The territory is very neat, well-groomed – it is very nice to walk there. 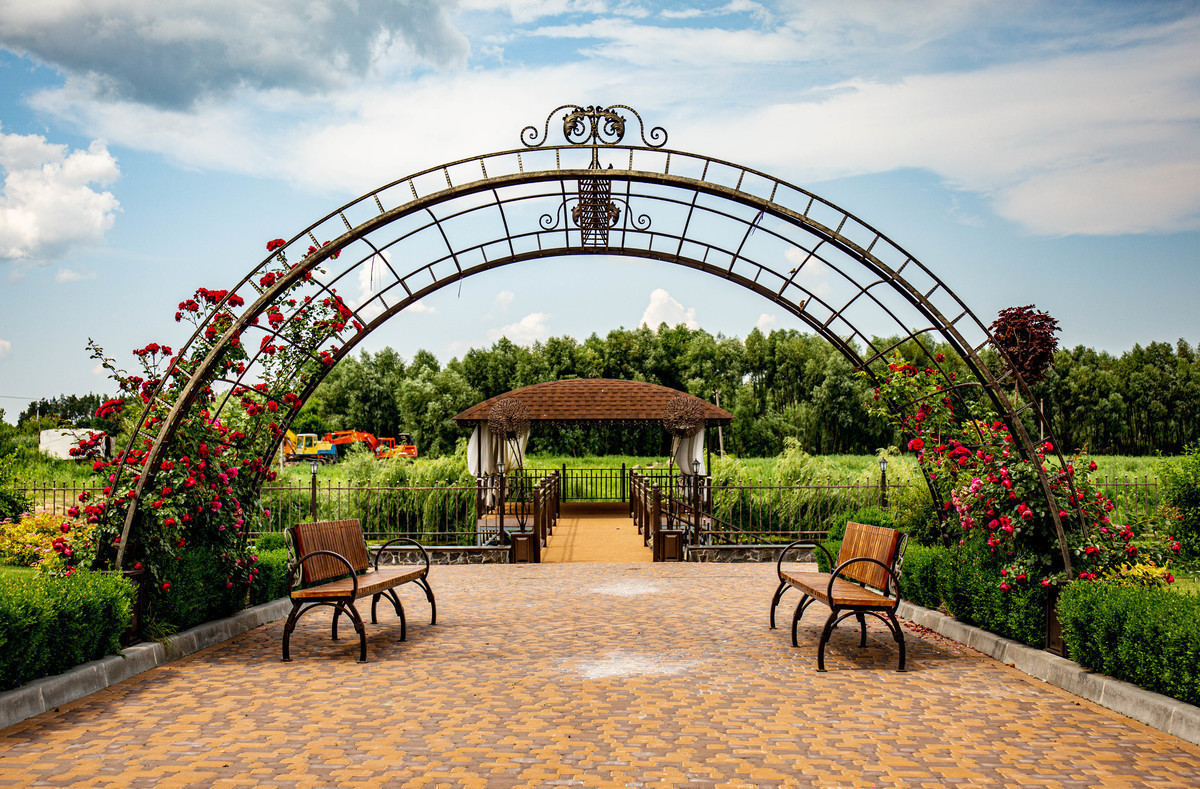 A very nice girl sat at the reception, who gladly showed us books on the history of this place, but refused to be recorded. She said that she knew this story too poorly. But agreed to send us the available materials by mail. 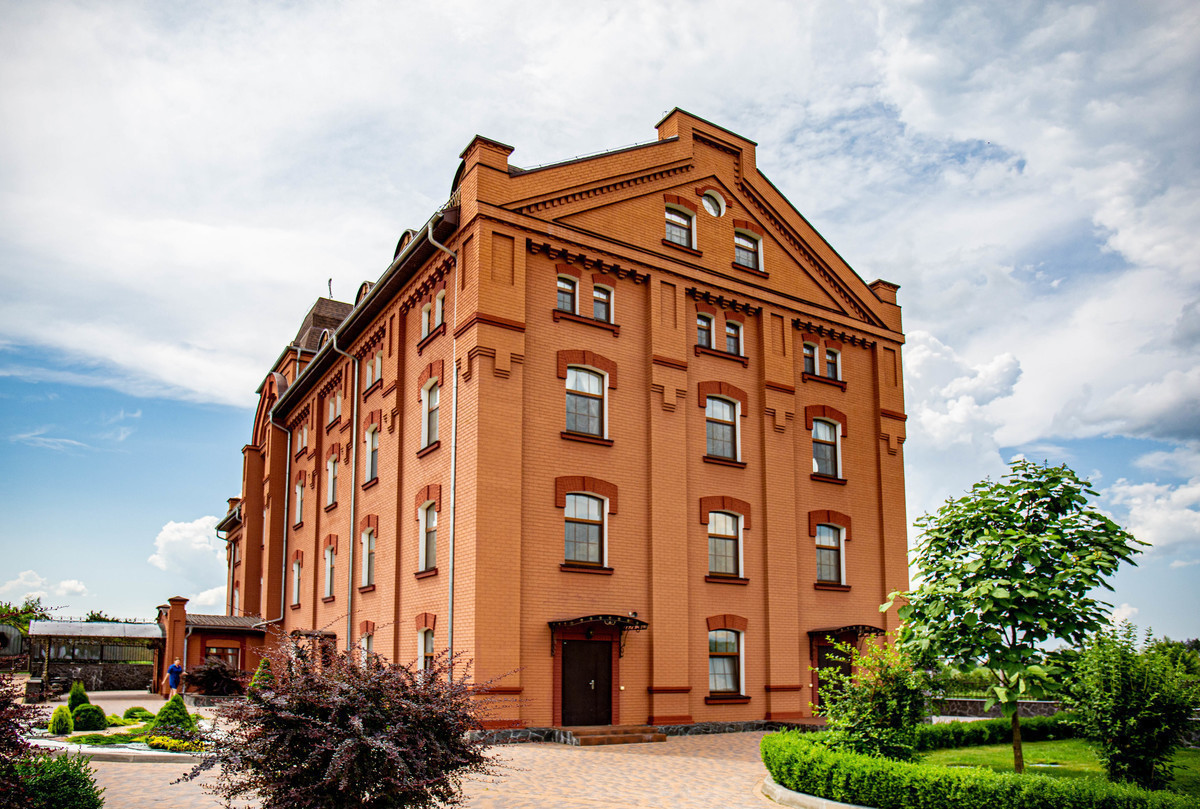 The mill was built in the 19th century. So far, this is all the information unfortunately .. At the moment, half of the mill complex is fenced, guarded and being used. And the second is almost destroyed. 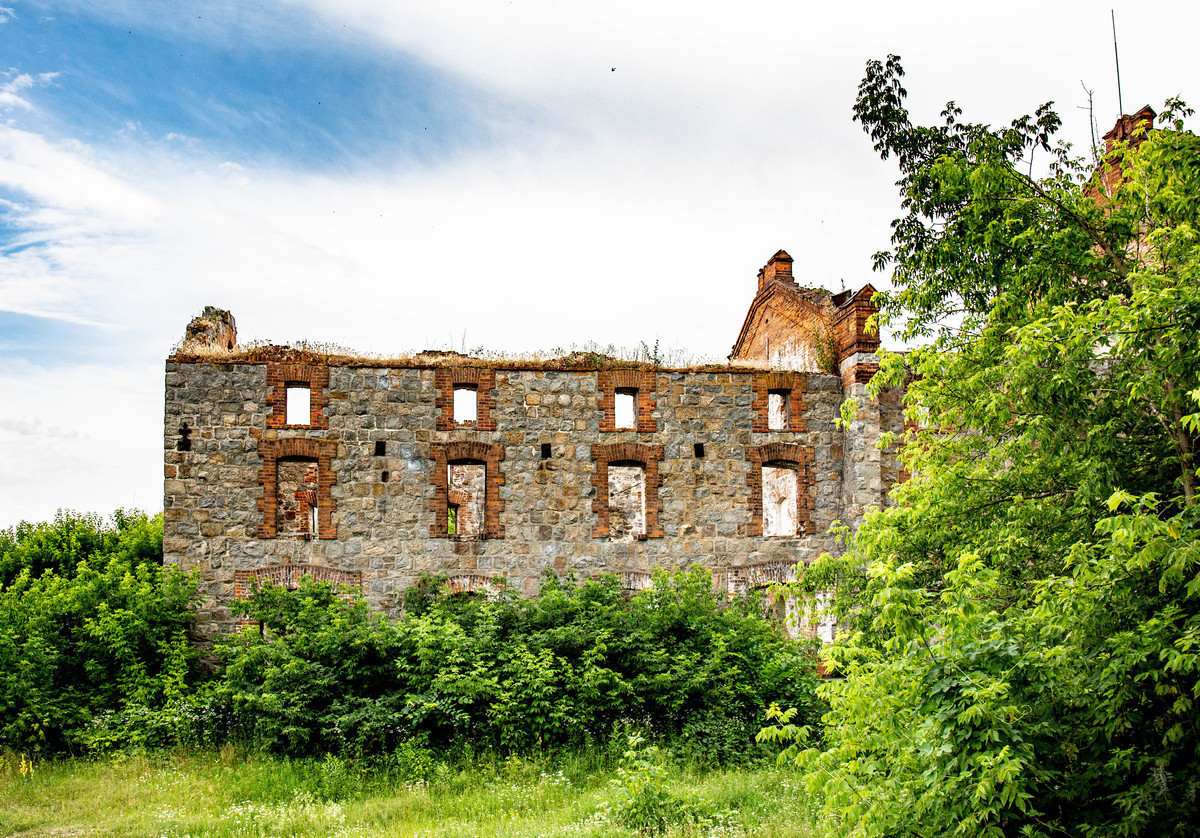 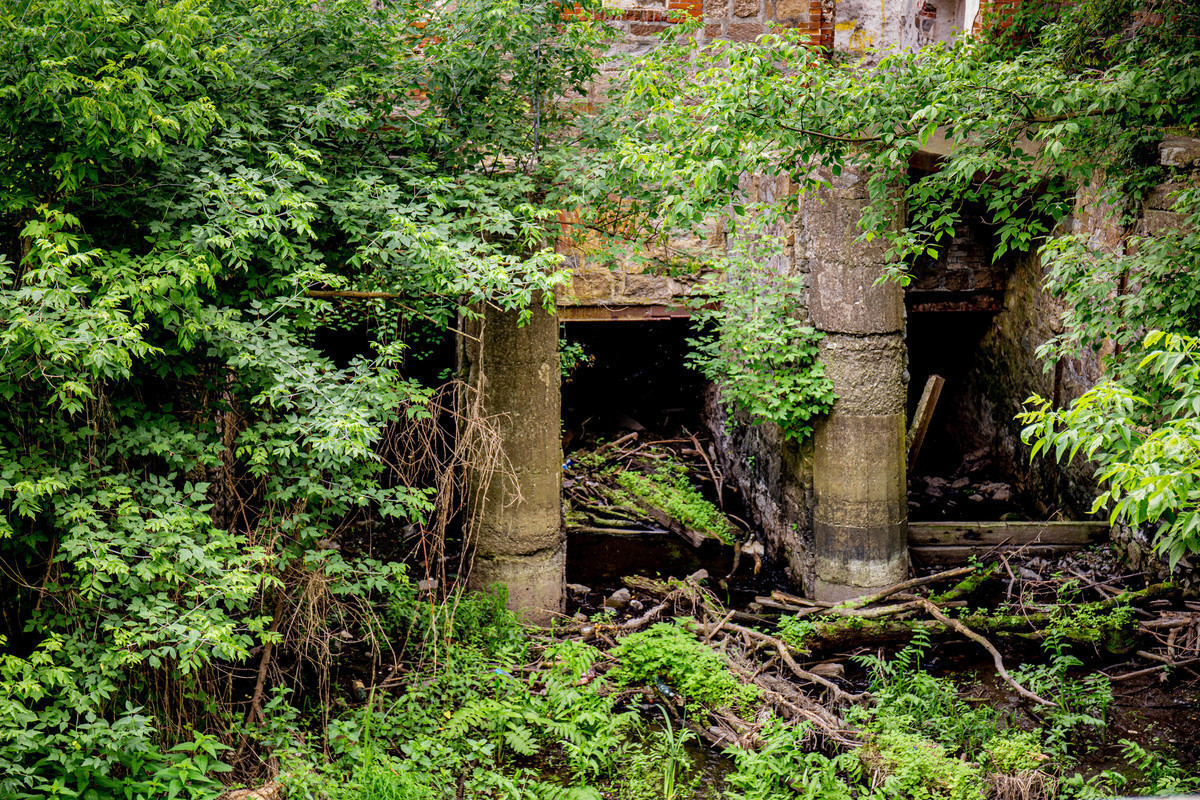 The treasured windmills in the village of Vodyaniki were waiting for us further.
I have repeatedly stumbled across the network to the mention that in Vodyaniki there are one and only real windmills in Ukraine. Despite the fact that we had to make a detour, we went there. That’s interesting!
But we had no coordinates. Just “on the outskirts of the village of Vodianiki.” Asked the locals, let’s go. Steep hills begin behind the village. Left the village, stopped and didn’t saw any mills. But! We have a little scout! It’s very convenient to launch a drone from the roof – you don’t need to look for a flat and smooth platform)) We’ve found the mills quickly from the air – they are on the next hill. And next to them, an unaccounted castle is discovered .. We were glad that we would see and shoot another castle, so we drove there.
Interestingly, there are very rich villas on those hills and … ta-dam! ski lift. Passing by all this modest beauty and see that the road to the mills is closed by a gate. There is a stone near the gate and nobody more. Absolutely nobody around. We saw another gate further that closes the entrance to the territory with the castle itself, that we saw from the hill. They’ve appeared to be closed also.
Driving a little further and see the usual rural courtyard with someone there. What if it’s a caretaker?)) It turned out that these were ordinary people who have a farm here, they can’t tell us anything – not about how to get to the mills (are there any excursions, payment for them and other tourist pleasures), not about someone to ask about it. We had no desire to climb over the fence (and as it turned out, right). But while we drove back and forth there, we were clearly noticed. First, a man drove up on a “loaf” (UAZ-452) – I still did not understand who he was. Not a caretaker, not a guard .. just a resident of the village? While we were talking with him, we reached the gate to the mills. At that moment, a car drove up and people of a different kind, more “business-like,” came from it. They asked who we were, what we were doing here and in general)) After enduring the interview, we received the go-ahead to visit this strange territory with one important condition – not to shoot a private territory (that exact castle).
A stone figure stands at the entrance. 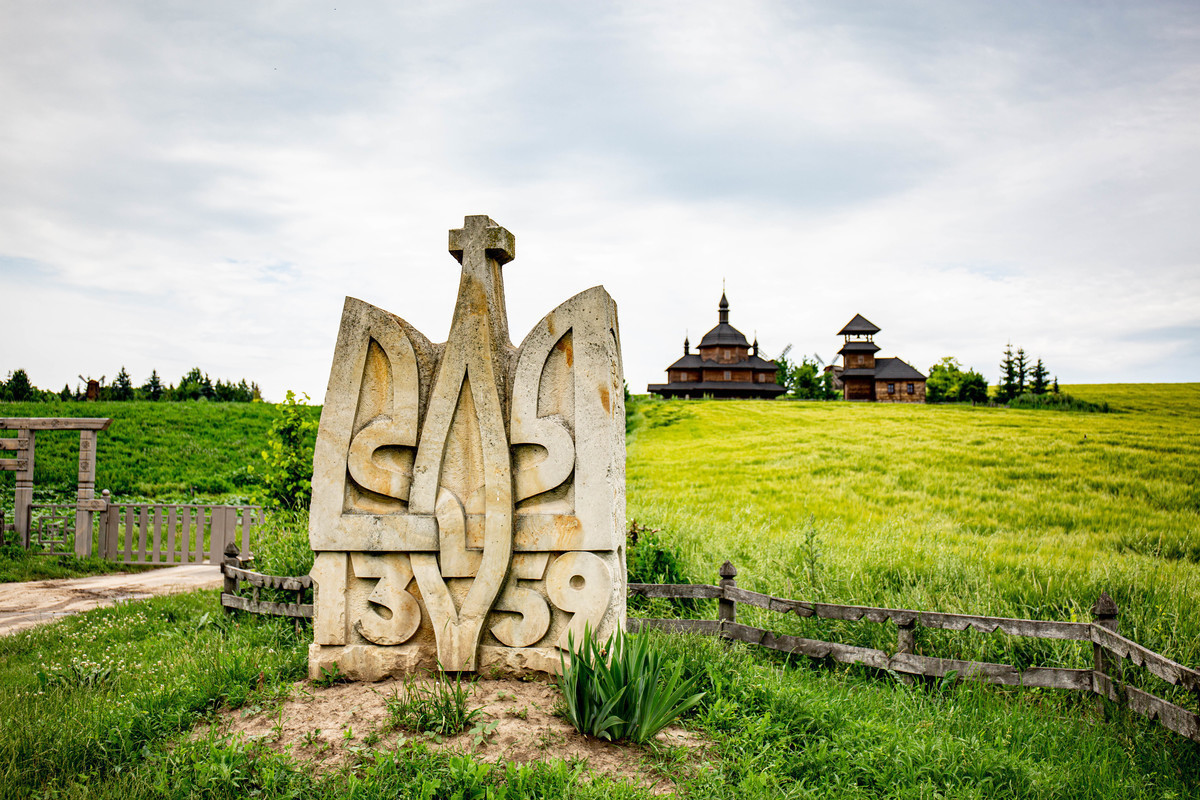 This date is considered the date of the village foundation. The first settlements in this territory dates back to 3 – 4 millennium BC.

As the same “quick reaction” guards told us, the Ascension Church was built on the same spot where they found the foundation of an old Cossack church of the 17th century. Consecrated in 2009. But, of course, we were not able to enter – there was nobody around. There are stone statues near the church. There are no inscriptions on them, but they clearly depict some saints. 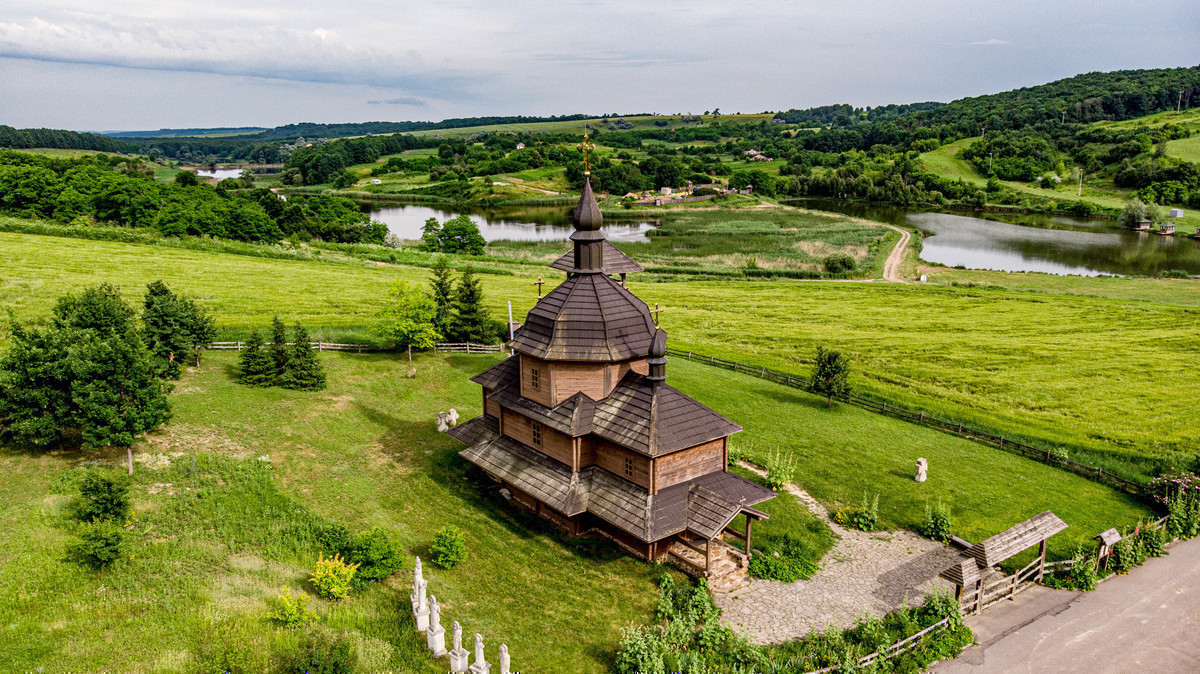 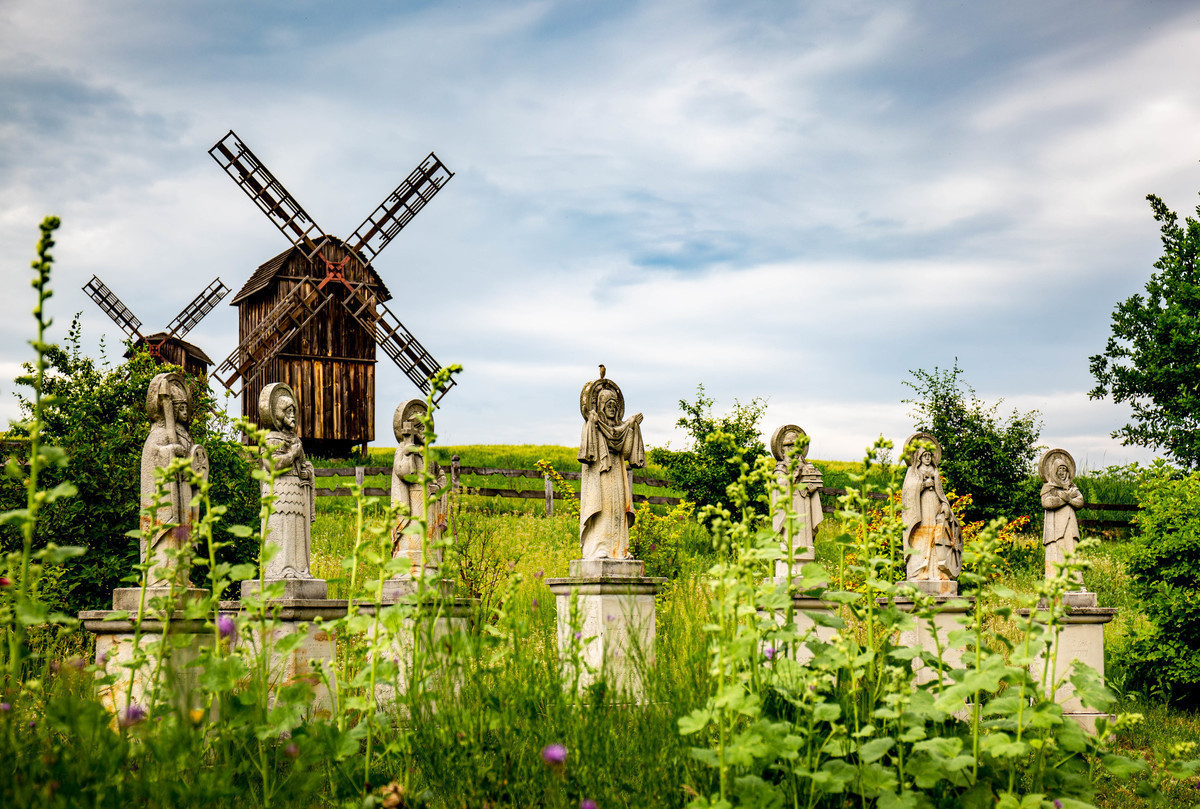 The mills themselves are very beautiful, standing on a very picturesque meadow and we spent a lot of time with them. There is one “but” – they are fake. So we were told by those same knights without fear and reproach. This is probably one of my biggest disappointments during our trips. “Well, I don’t know – they brought them, assembled and set them up. Maybe a new buildings, or maybe found somewhere. ” 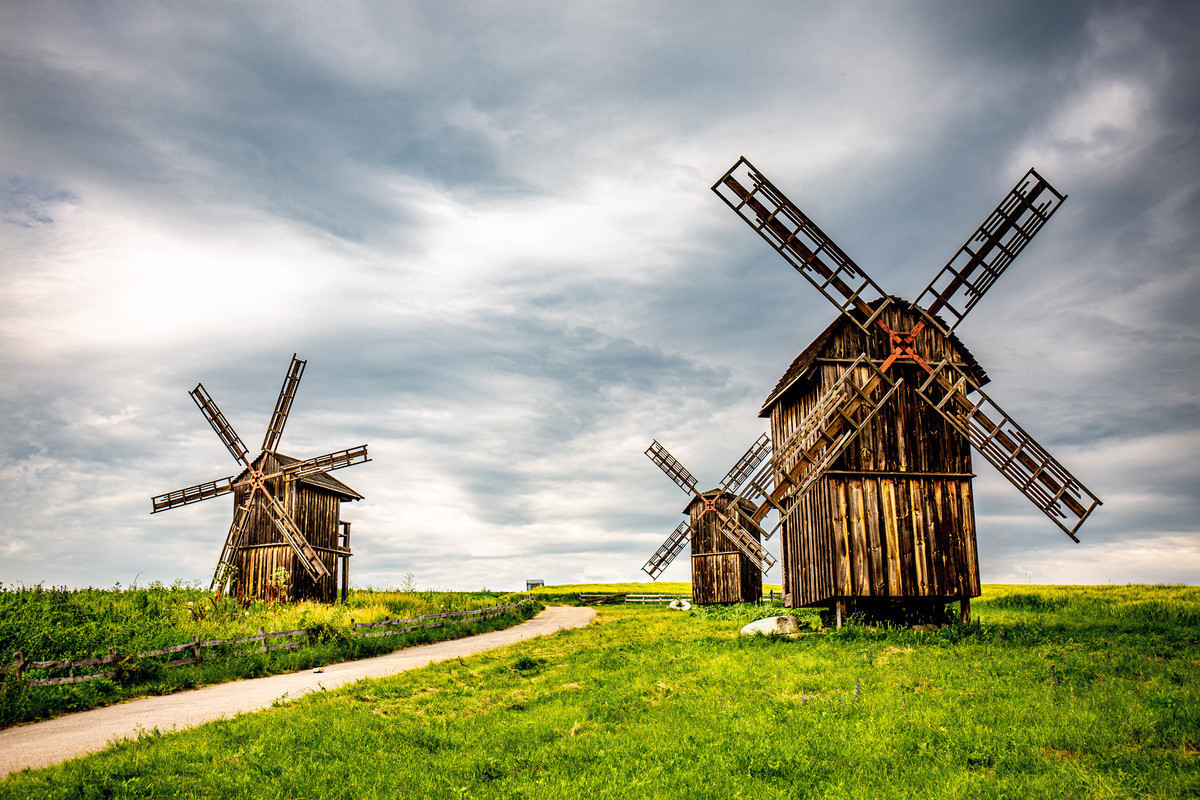 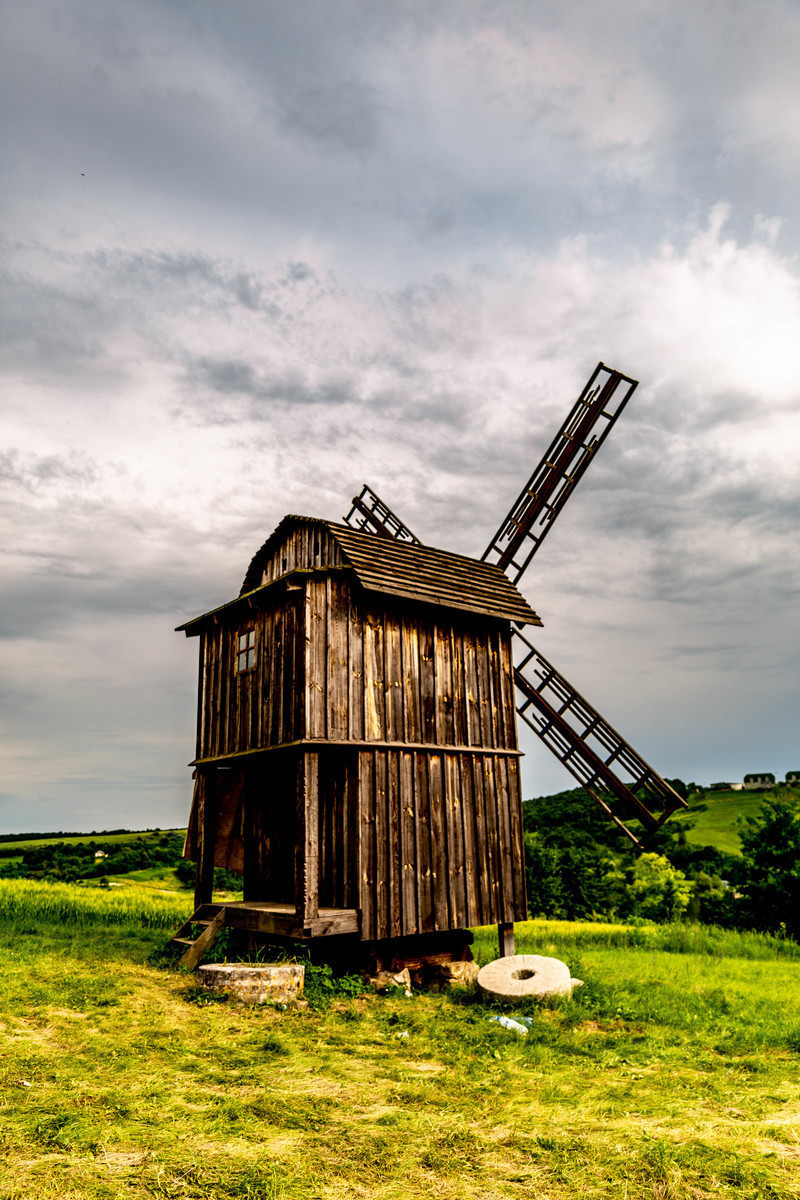 Did everything we wanted, landed a drone. On the way back we found a gazebo. We were sitting in it, packing our equipment. The car quickly appears, our gallant caretakers unloaded from it and started a quarrel – we did not tell them that we will be taking aerial photography. We talked for a long time. As a result, showed them what we shot on the drone – there were no shots with so carefully guarded private territory. That solved the issue. But that was so noisy …

Initially, we planned to spend the night in Vodyaniki, but decided to drove another part of the way. And went to the Monastyrishe..

Along the way, we drove to another estate – in Leskovo. 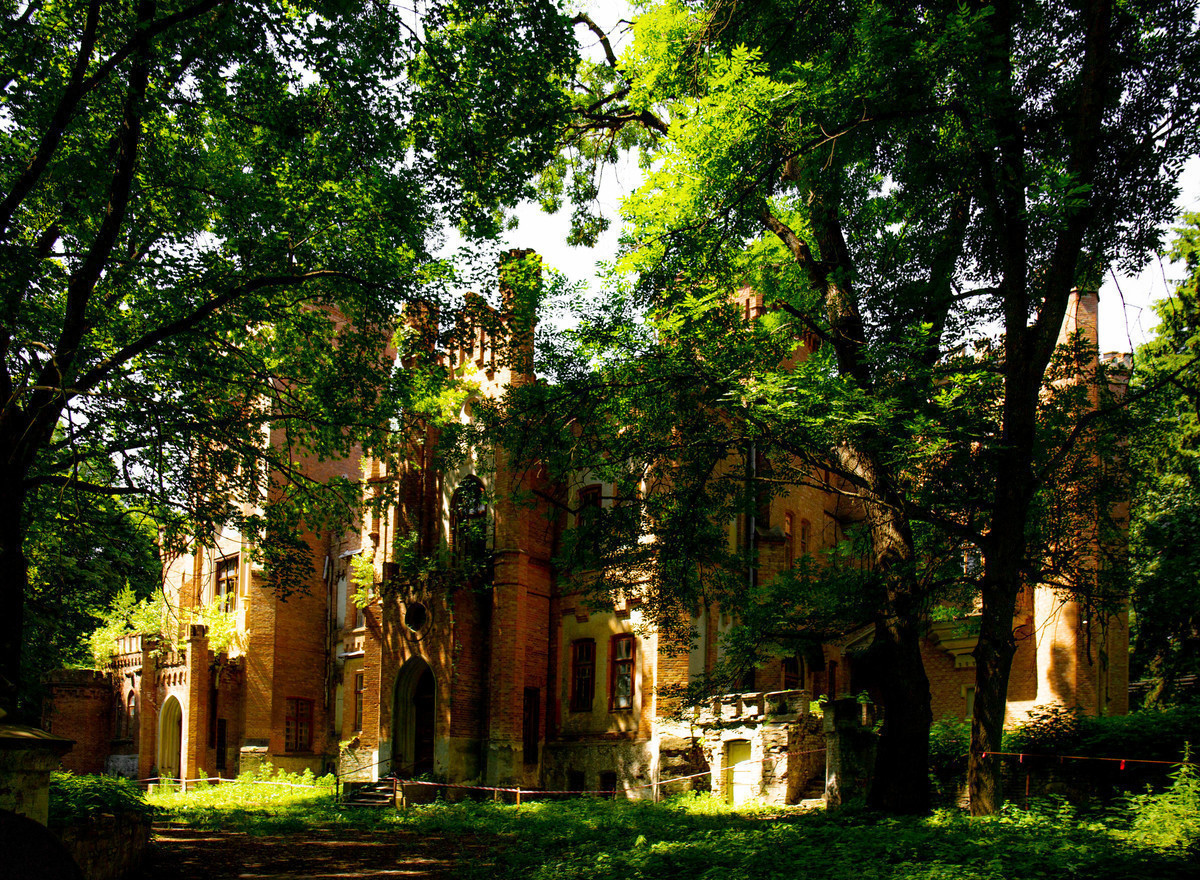 The Dakhovsky estate is located on the territory of the military unit. We found that when we arrived and ran into the gate with a sign. We asked the watchman very much and he let us in to look at the estate. And made a tour for us at the same time. And, by the way, according to him, we arrived a day before the official excursion – once a week they let the “historians” with the group excursions. 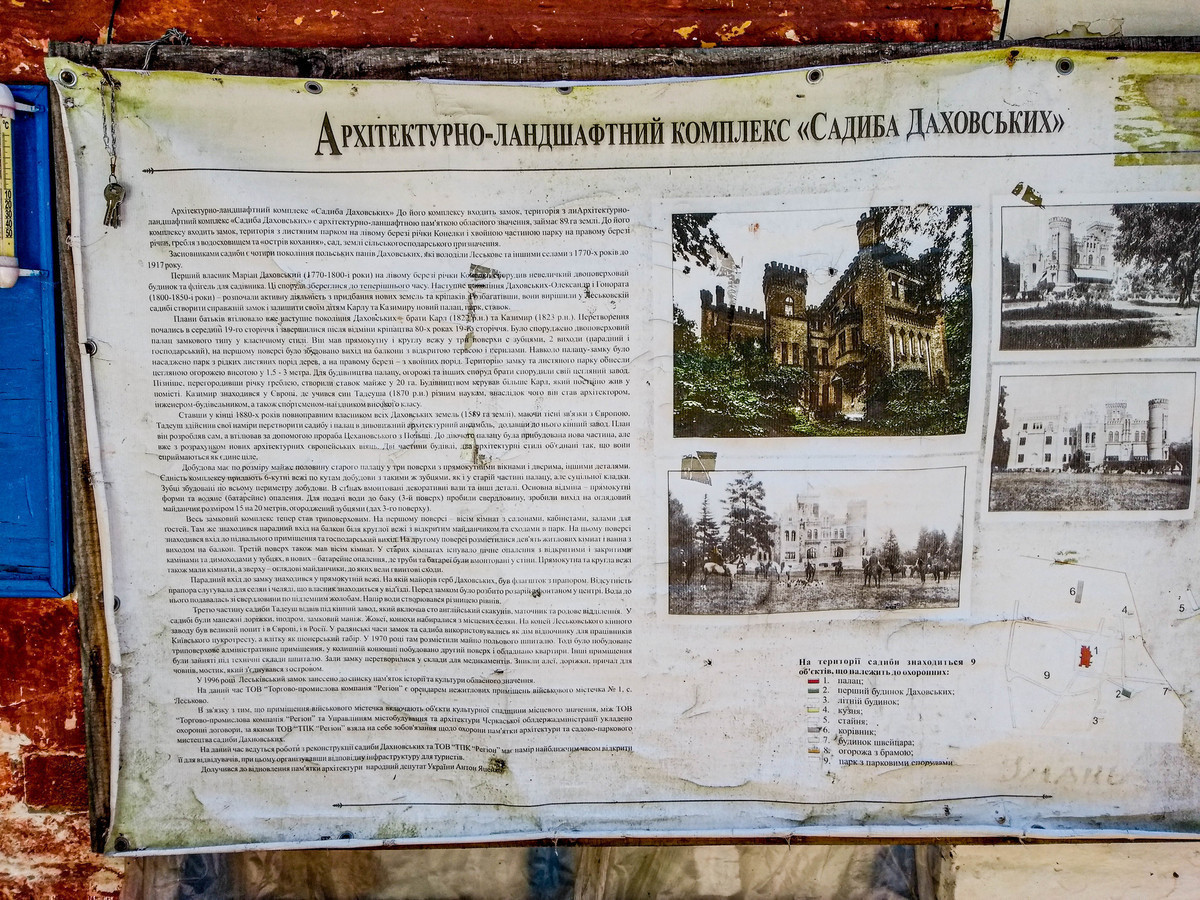 Once, during the Second World War, there was a military hospital in the estate. Either then or immediately after the war, a sanatorium was made from the hospital. Also military. So this territory still hangs on the balance sheet of the military. Everything around is in disrepair. 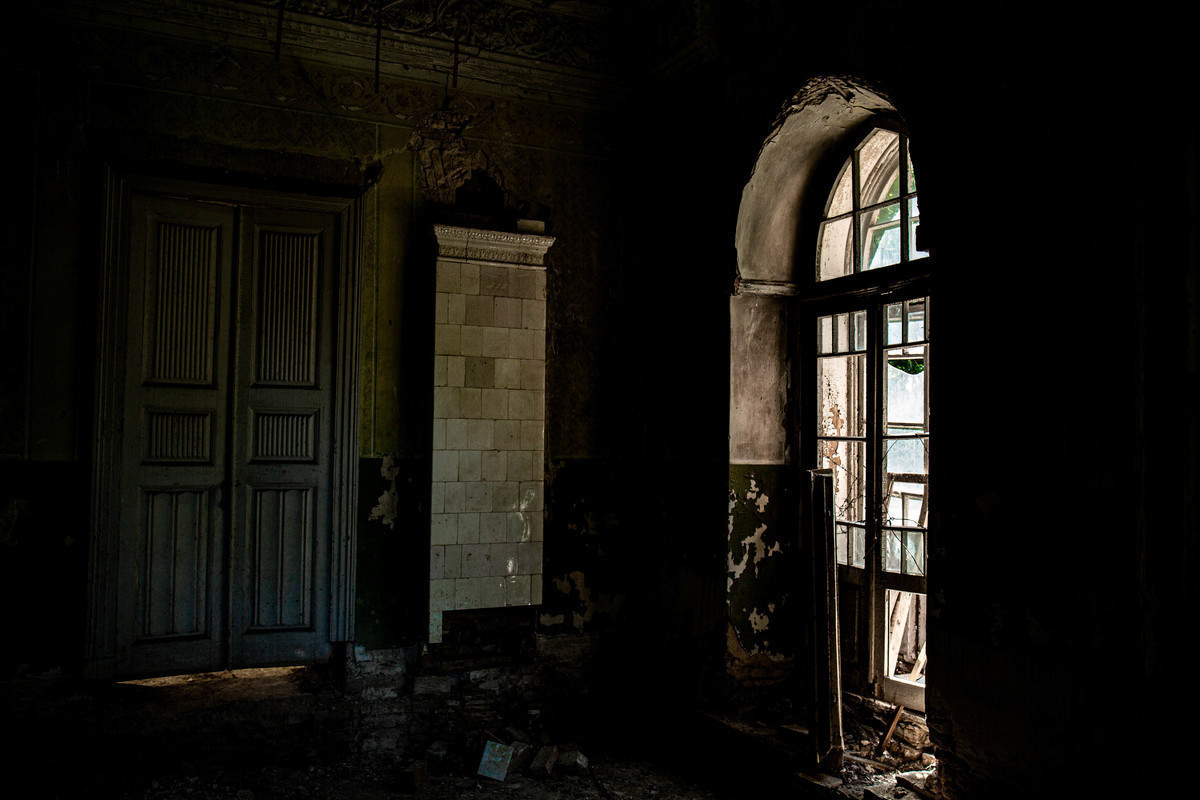 The estate itself is very beautiful and has an interesting history. It began to acquire a modern look at the beginning of the 19th century and was laid down at the end of the 18th century. 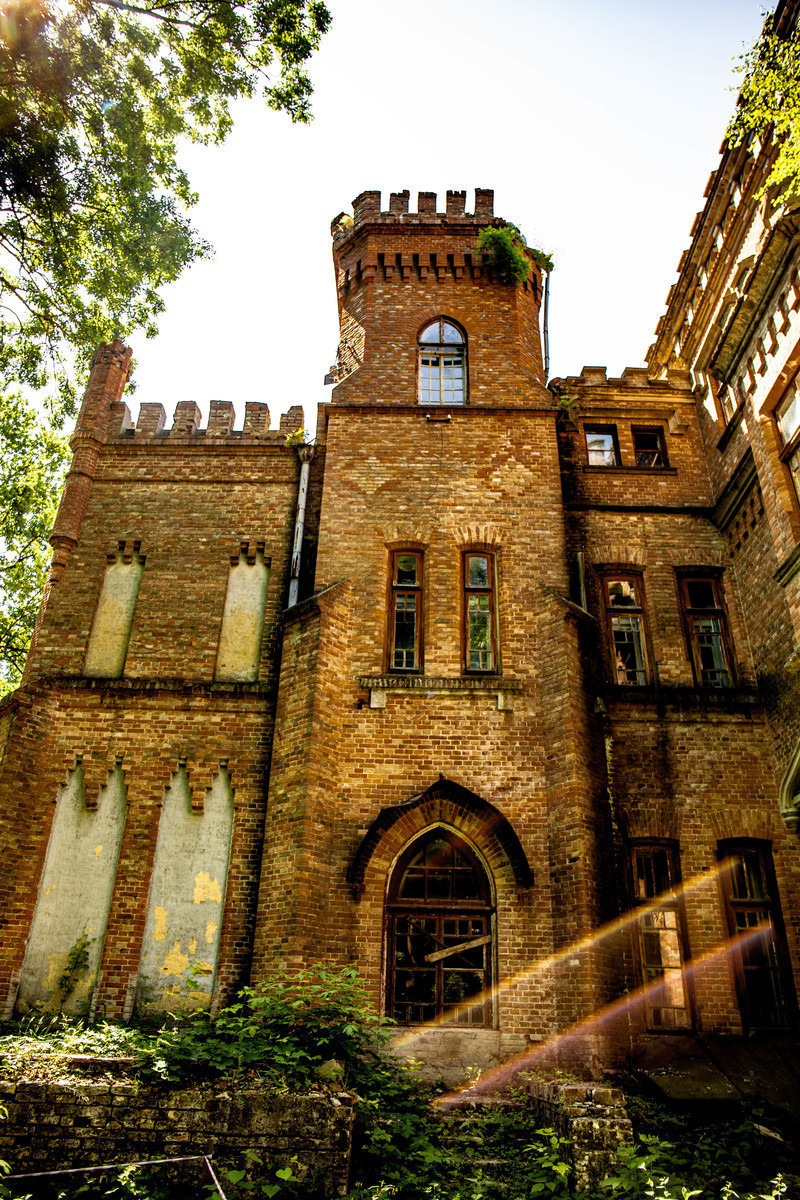 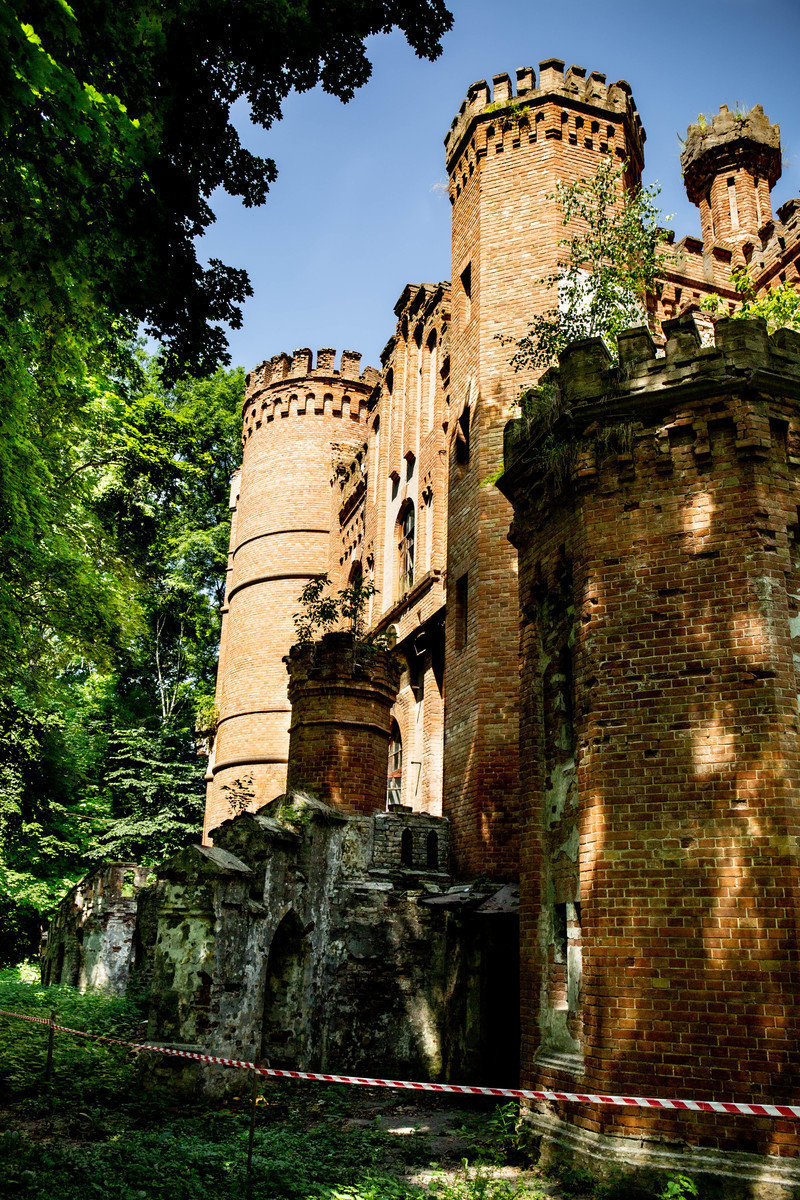 And now we had one more piece of the journey for this day. And a little bit of adventure.
We arrive to the Monastyrishe to the “Mont Blanc” Hotel. It looks like a pretty good establishment. We go in, and there was nobody at the reception. We’ve rang the bell, shouted .. somewhere inside we could hear someone digging. A man came out after a while, looked at us. “What?” We told that we booked a room for us. The answer simply subdued us, “So what?” Having found back the gift of speech, we informed him that we would like to move in. “Ah .. well, let’s go.” Later it turned out that the guy was cool – that’s his humor sense. He showed us where to sleep, gave the keys. And here, he told us, are the keys to the entrance (there was nobody else in the hotel except us). And I’m going home. Like this. To be true, at first, he showed us where the kitchenette was and advised not to go to the barbecue around the corner, but to go to the “Tavern” cafe at the crossroads. Rather, when we asked what about the barbecue, he simply shook his head with a mournful face. So, a cafe where you can eat well..
Went in there and plunged into the forgotten world – the interior and the ladies of the late SSR – the beginning of the 90th. Two sour faces dissatisfied with the whole world in blue aprons look at our procession to the table and were in no hurry to approach us. I had a feeling that they would now start to scandal about the fact of our appearance, since there was no one there before us. But no – they threw us the menu sheets on the table and left. Of course, we read it out of curiosity. School cutlet, mashed potatoes, chopped meat, compote .. Well, something like that. After some time, one of the sour young ladies appeared and demanded to say what we like. Smartly, we’ve asked what they had. We got the answer “well … I can fry the chop and cook potatoes ..” In order not to complicate the situation, we just said “and make a salad.” Like this. Somehow stuffed food into ourselves under the gaze of irritated young ladies, we went resting, realizing the whole depth of the barbecue’s fall, compared with which it is well and tasty here.
Cherry on the cake of the day were hordes of cockroaches in the kitchen of the hotel. They were not seen in the room, but when leaving in the morning, we took all the security measures that we could come up with.