Exploring the reserved areas of the south of Ukraine. Second part – stormy and salty.

So, our next goal was to get to the island of Biryuchiy. In fact, this is not an island, but a spit called “Biryuchiy Ostrov” spit)) It’s simple – it used to be an island (before the beginning of the last century) and it was separated from the Fedotova spit. The island has the Azov-Sivash National Nature Park (formerly the Azov-Sivash Nature Reserve), which was our goal.
You can get to Biryuchy island by boat from Genichesk (from the Arabatskaya spit) or by road, making a circle of 300 km through Kirillovka. The first option was chosen. The Arabat Spit is full of campsites, which could not but rejoice. We chose the best by reviews – “Chumatsky Shlyakh”, near Schastlivtsevo. In addition to the fact that the road turned out to be shorter in mileage, there were objects, that interested us, on the spit – salt lakes and hot springs.
Before the trip, we were looking for a tent from all our friends and acquaintances. And in the end, we got a huge camping tent – about 5 meters in length and 2 in width. True, inside there are two separate sleeping tents and a vestibule, but it is huge …
Upon arrival at the campsite, our plan began to encounter the harsh reality of the wind at 38 km/h. And the tent succumbed. Rather, we almost succumbed with it. We were setting it for about 2 hours. A frantic windage did not allow to lift the structure, the arcs were broken by the wind, we found pieces of thick wire and reinforcement on the shore, we wound to the broken sections as the splint.. We managed, but were incredibly tired. For several days everyone had a terrible muscle pain – they had to hold the tent, so for it not to be carried away by the wind, resting their feet in the sand and wrapping the edge of the tent on their fists. By the middle of the night we had some food and drank tea. There was no strength left for anything but sleep. Honestly, I did not expect such a trick from Hannah.
During the preliminaries, I discovered a new product for our tourists of our territory. Although, rather – well-forgotten and modified old. It’s a kind of familiar “Tourist Breakfast”, only in soft packaging and with a larger assortment. This night we were very happy with this food – put in boiling water (it doesn’t matter that it doesn’t fit well and not all at once), waited, opened, ate. True, a second, but not lesser, surprise was waiting for me in a pack with my potatoes – it was so oversalted that it was difficult to eat even with bread and tea ..
Well .. how much does a tourist need?)) Calories, water, a sleeping bag, preferably – a tent over your head))
We overslept safely all night, I woke up early in the morning, washed, returned … and saw how our tent was folding. Again. I wake everyone else. While one is holding it, the rest wash themselves, prepare food and collect things. 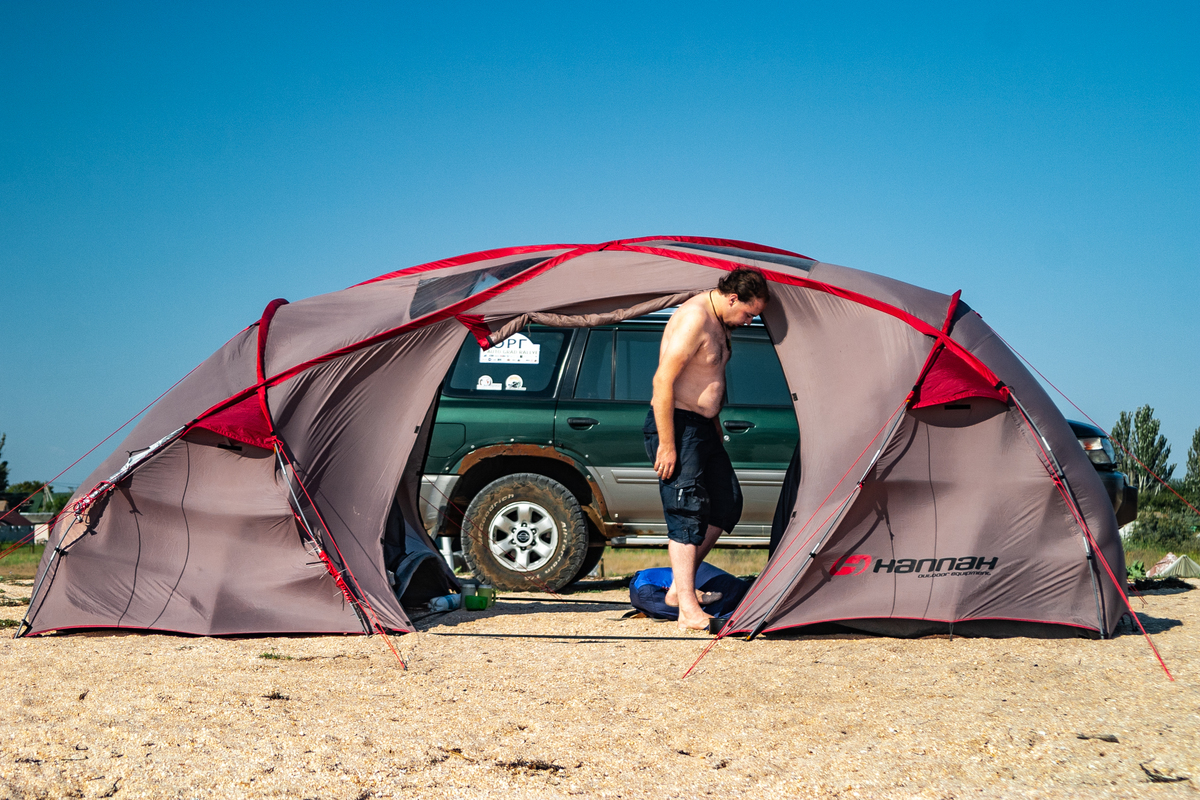 Our morning passed in this position))) We opened the middle part so that the tent would sail less and could be held by one person.

And we started to gather, because the evidence of the impossibility of further exploitation of the tent went wild)) Of course, we did not miss the opportunity to swim in the stormy Sea of Azov – the waves reach the waist of an adult standing at the bottom – it’s great))) Although, diving with flippers and a mask, of course, will not work. The specificity of the Arabat spit is that the depth here is 1 – 1.5 meters even far from the shore. Therefore, even in such a storm, you can swim easily and naturally)))
And there were a lot of seagulls on the shore and they let us close enough))) 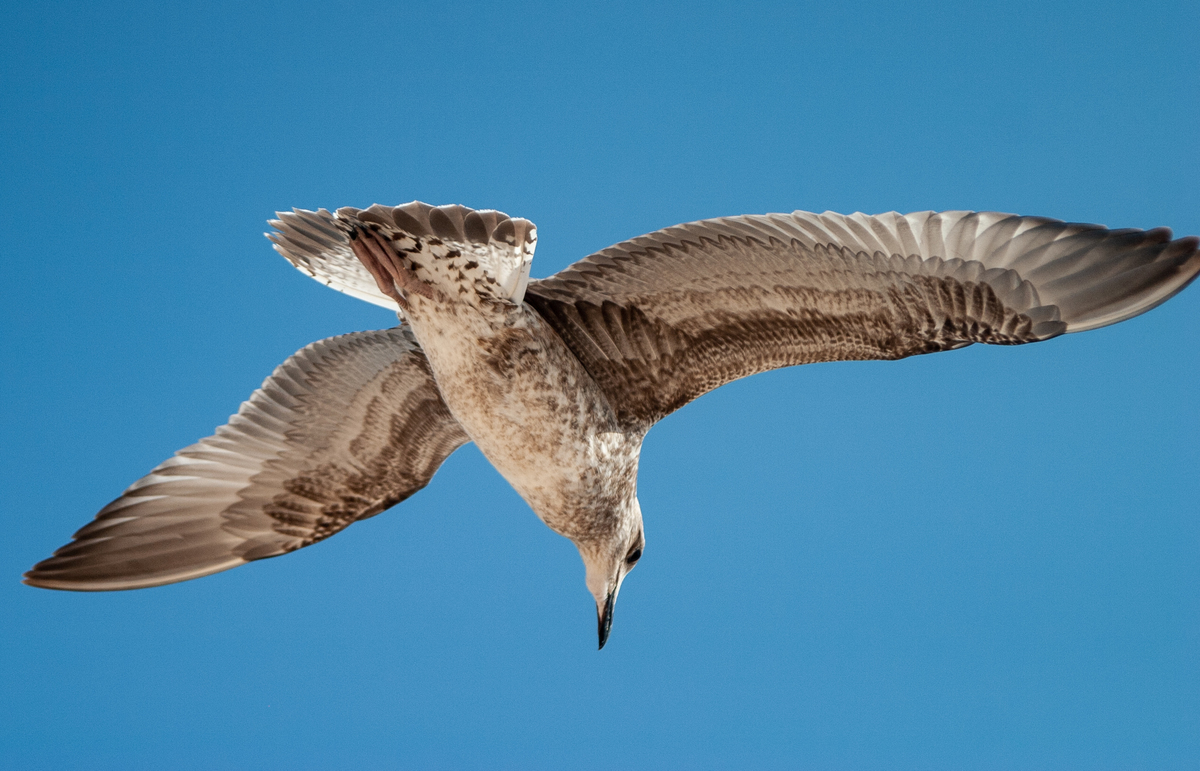 In addition, the man clearly liked the strong wind: 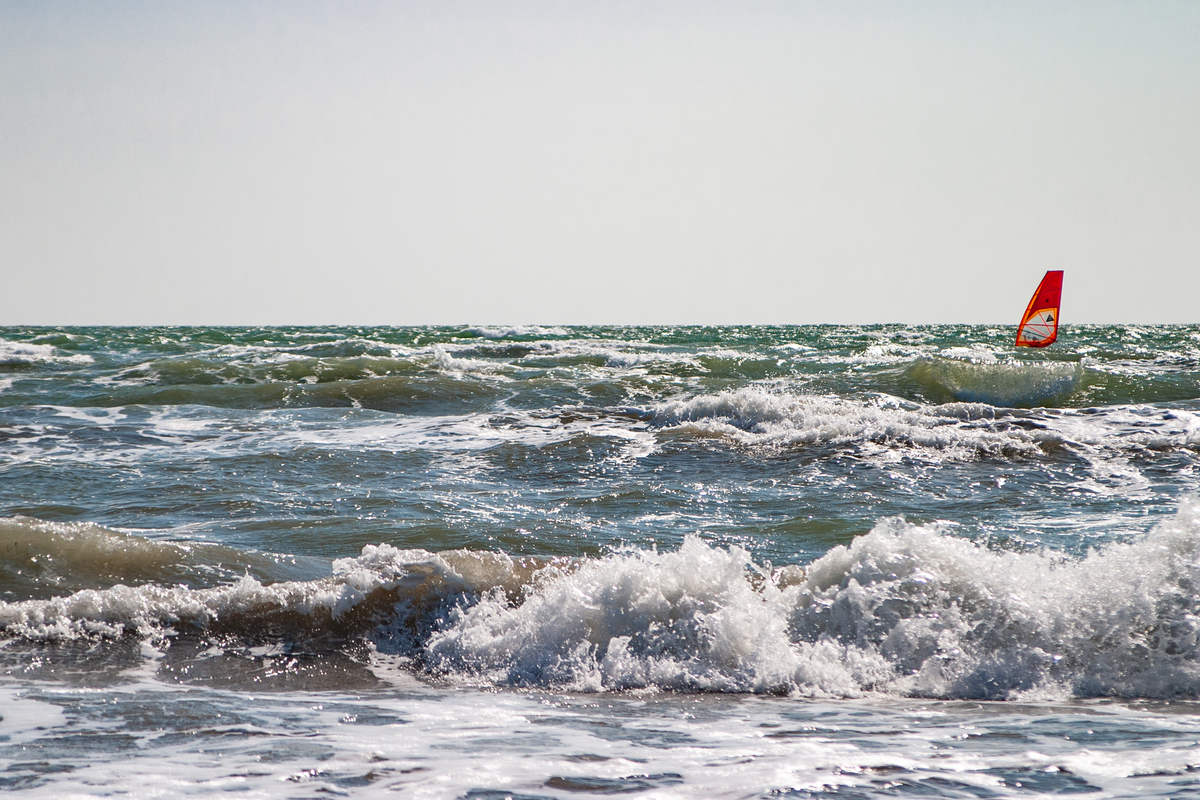 But such a strong storm prevented boats from Genichesk from going to sea)) When we arrived there, at the point of excursions sale we heard that a trip to Biryuchi Island will become possible only after 4 days at least (apparently, this period is a forecast for the storm). Instead, we were offered a 6-hour ride in an old bus to the salt lakes. We have refused. One of the reasons was that we got an alternative – either to visit all local attractions and then look for rental housing on the Arabat Spit, or to go to the city of Zhelezniy Port after that. Another point was planned between the Arabat Spit and the Zhelezniy Port, so it was pointless to leave in the evening – we would not see anything on Lake Lemurian at this time of day and would arrive at the Zhelezniy Port at night, and we no longer had the tent for camping. What’s the situation was in the Zhelezniy Port with hotels / hostels / other accommodation was not entirely clear, since I hadn’t clarified this question beforehand (there wasn’t any need — I was finding out about campsites), and the cellular connection in that region was very weak for finding options in the network. Another – that we are brave enough – we can go by car – it will turn out cheaper and probably much faster.
So, we left Genichesk at about 11 – 12 in the afternoon towards Lemurian Lake and further to the Zhelezniy Port. The total distance is 270 km, the estimated time, that we would spend on Lake Lemurian is at least an hour, the road is about 5-6 hours, taking into account the quality of the roads. I searched for the coordinates and name of Lemurian Lake for a long time. I saw photos of the pink lake on the network, written – the south of Ukraine and that’s it))) Well, or “near the village of Grigorovka.” It turned out that there is not one village with the same name and last year we came to the wrong place)))) – we missed 300 km! There are 4 Grigorovoka in that region at a decent distance from each other, all near fitting reservoirs. We were lucky at the second time (well, after a long and thoughtful study).
We were driving along the steppe interspersed with fields, drove through a small village, drove further along the steppe expanses, moved over a mound and an amazing sight opens to us… A huge neon-pink lake! Nothing indicates its appearance, except for the map – the soil is ordinary, vegetation is low steppe. And then .. pink surface to the horizon)) 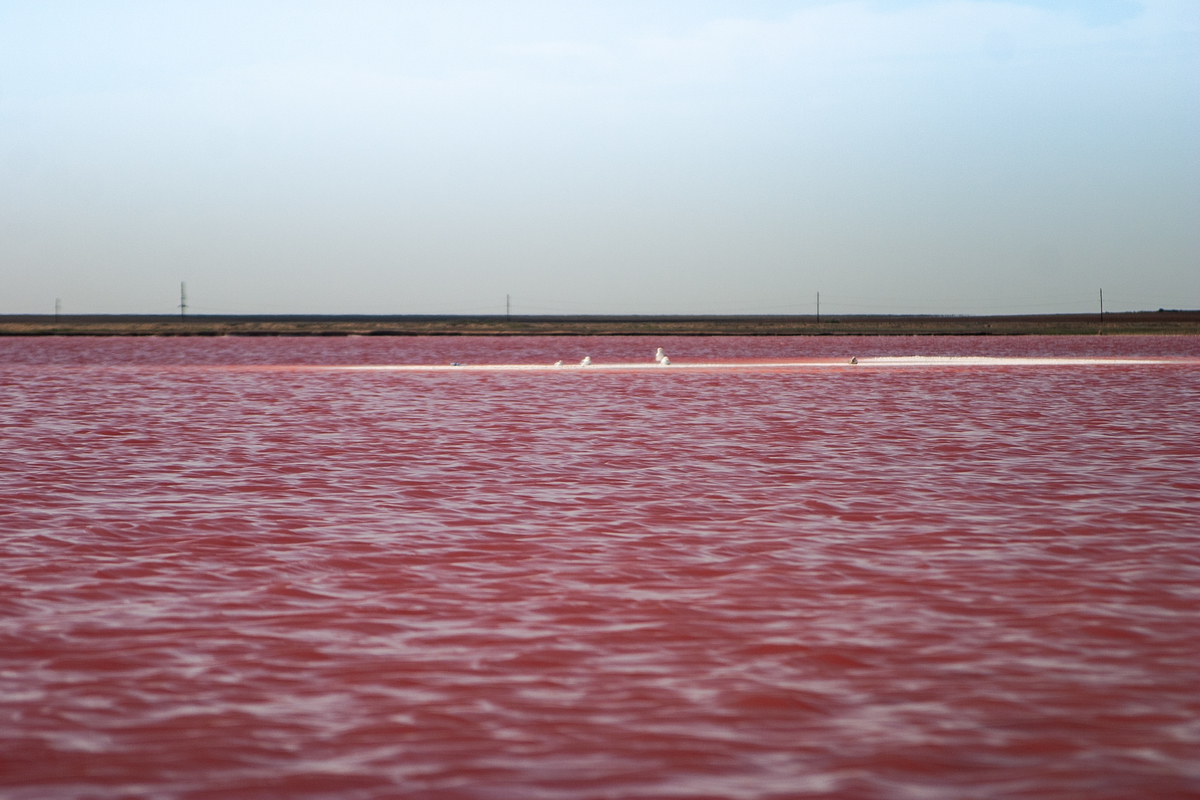 In the network (according to the local people) there is a legend that in the first half of the last century a secret plane fell somewhere in the area of modern Lemurian Lake (here are variations on the theme) and a pit appeared that filled with salt water and became so strange in color by itself. I don’t know which plane was supposed to fall to make a lake of this size)))
Well, be that as it may, this is a different story)). And we have a delight and a photosession!
We’ve stopped in the nearest place – the coast here is quite low and in the foreseeable space everything is exactly the same. Photos of other landscapes run through the network – next time we will devote more time to this lake)) 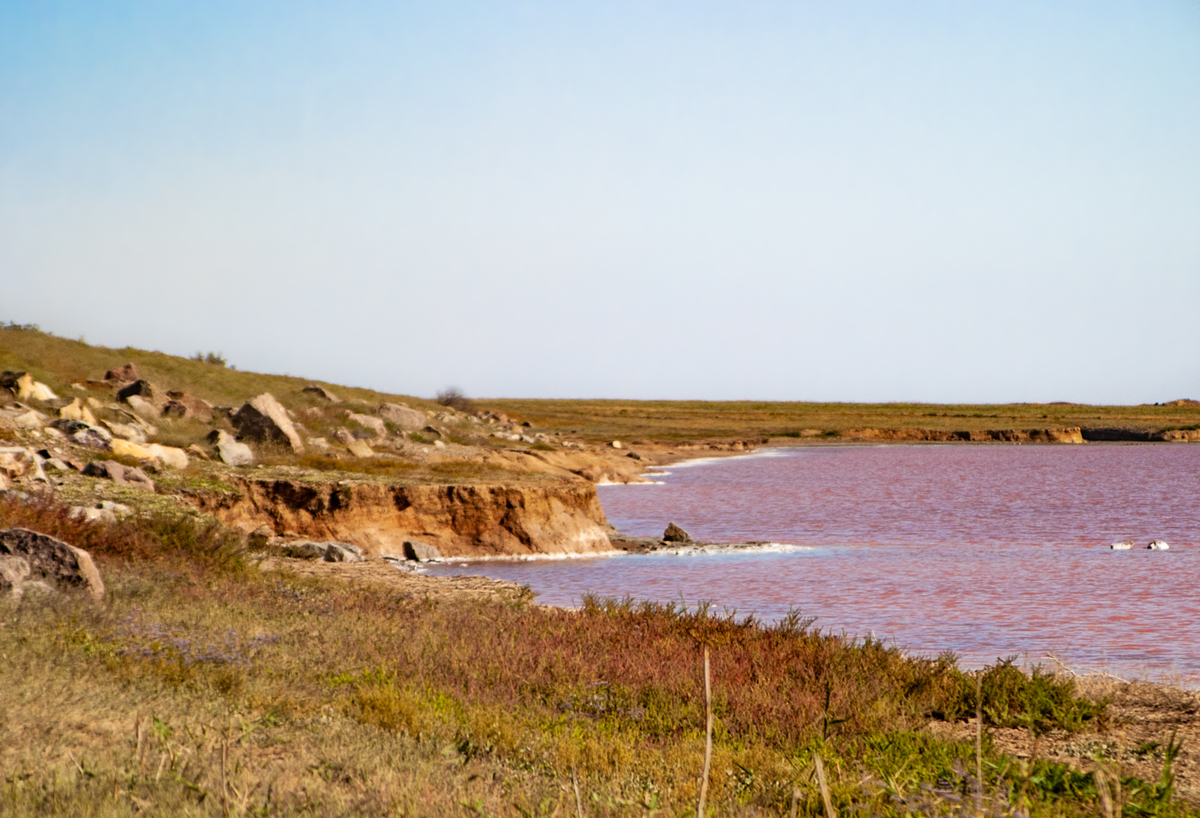 We unloaded, throw off our shoes, roll up our trousers and, without stopping repeating to each other, “look what it is like… magical / pink / extraordinary ..”, we go into the water. It was known in advance that the lake is oversalted – it is better to keep clothes out of the water – it easily breaks after drying)) 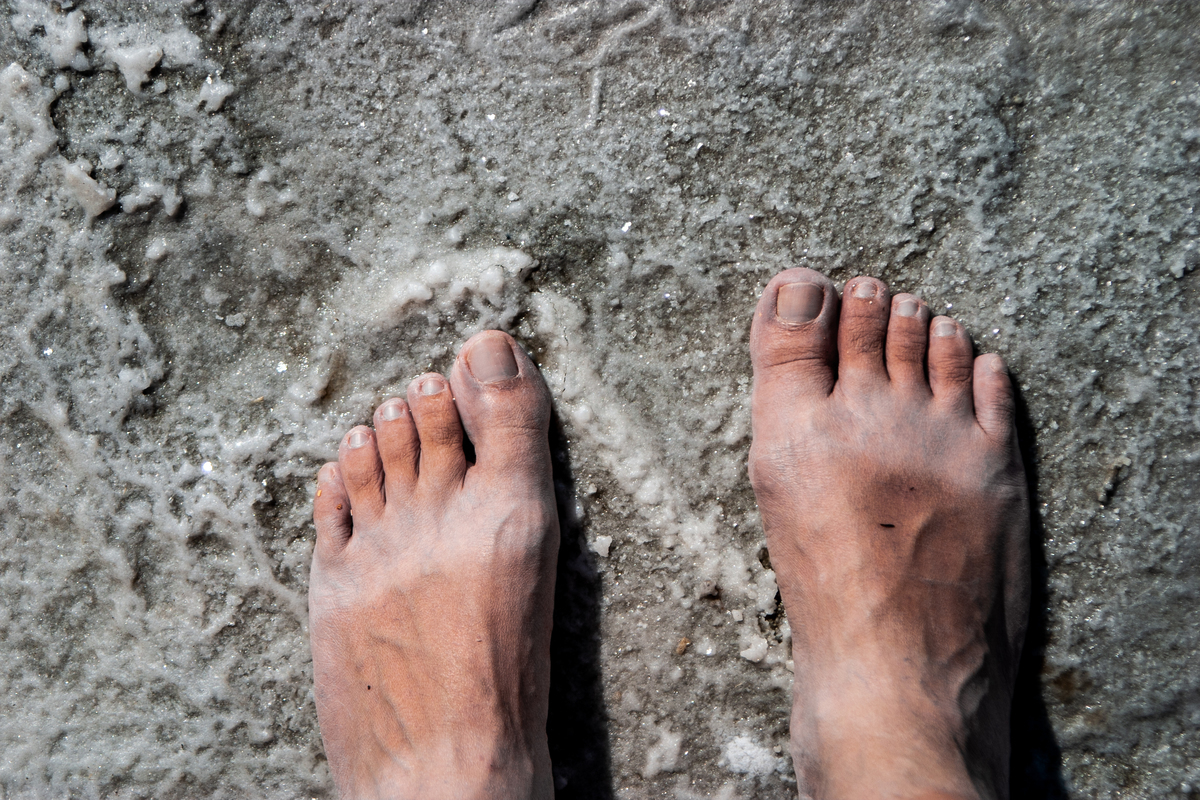 Of course, you have to go for a walk over the bottom! And collect crystals! And then it turned out that after a couple of meters of silt, the depth is evenly in the middle of the lower leg .. and about 30 to 40 meters away stands the island .. Well, of course, the camera is in the teeth and forward! Walking barefoot along the bottom, consisting of large crystals of halite, is a pleasure for the strong in spirit. Once I learned to walk on broken glass. So – it was easier)) To “go” in this case – it’s said very strongly – we lift the leg, but not completely out of the water (to sprinkle the clothes less), we grope the next place with our foot in the muddy water (if we have a large crystal under our feet, try to pick it out), we carefully carry the weight and so move around a few meters per minute)))
The crystals have grown together in a continuous crust and to pick one off is a difficult task, and for the legs it is a continuous spiky surface.
So in half an hour I almost reached the marked island. Of course, the seagulls did not wait for me and flew away. But that’s ok – I thought to collect a couple of larger crystals there. And now, there remains only a meter to the islet, and bubbles begin to rise from under my feet from the bottom! The bottom under the weight sags and releases air or whatever is under the crust .. To the shore – 30–40 meters, what depth of silt under the crust is impossible to imagine, the camera is still on the neck, and silt under the crust is most likely the same as near the coast – thick sticky clay. Therefore, with all caution, I begin to take back. But apparently, I disturbed something in this holistic structure and a few steps back were just as complex and unstable. I exhaled only a few meters away from the island)) It’s like walking on a snowy crust – the feel and mechanics are the same. Only here it is not known how much sludge under the crust, which can drag you down and will not ask any questions))
Having joyfully cut off our fingers and soles, we rinsed ourselves with the remnants of water and drove to the Zhelezniy Port. I somehow did not imagine that Lemurian Lake would turn out to be so large (and you just had to turn on the satellite mode in Google map and find out)). Further along the coast we met a swan sleeping peacefully in the surf)) 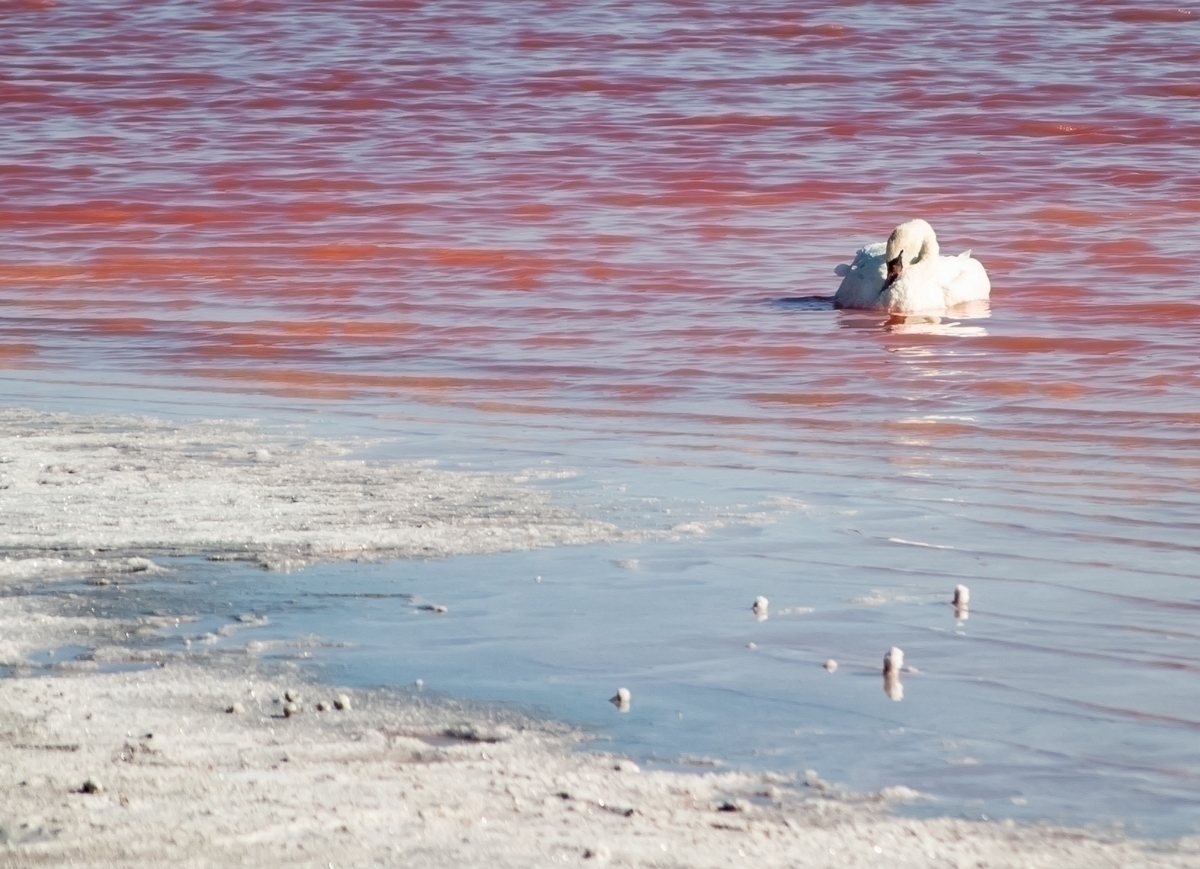 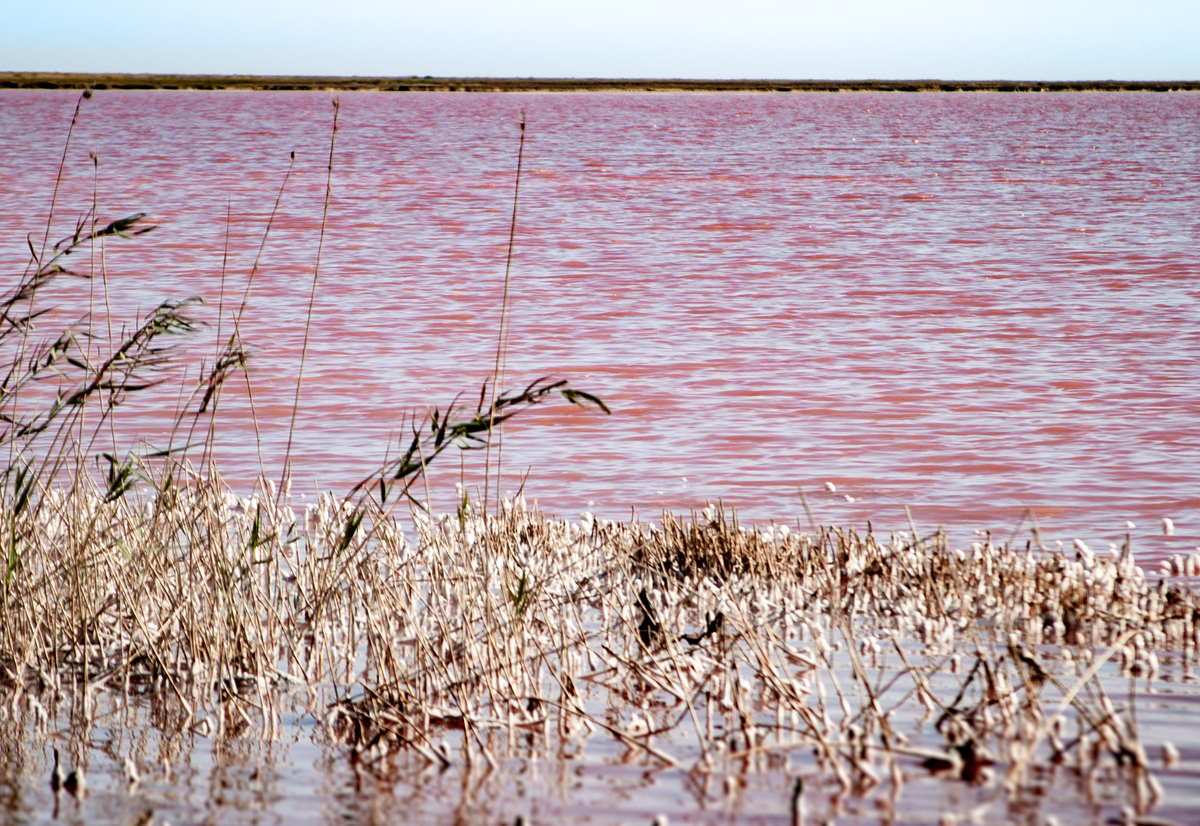 And a little salted reeds))
We reached Zhelezniy Port without any incidents. But there they were waiting for us in sufficient quantities)))

Follow Me!
© 2020 HedgeHog Stories
All rights reserved. When using the materials, an active link and/or direct hyperlink to the materials on the site, open for the search engines, is mandatory. The rights to all materials belong to Dziuba Olga (unless otherwise stated and the source to the originial is not stated) and are protected by the law of Ukraine "On Copyright and Related Rights". The text materials are licensed under CC BY-NC-ND 4.0.