Today we had to get to the Bad Aussee city in Austria. Tomtom stubbornly paved the way there through Switzerland. But to enter Switzerland, we would need to have a separate visa, which we did not have. Therefore, we persuaded Tomtom to go a longer way. Total – plus 100 and odd kilometers instead of 10 kilometers via Switzerland.

Somewhere on the border with Austria, snow began to pour. We drove very quickly to the dumps around the highway, about three meters high. On the highway, the maximum speed (on digital displays along the road) immediately decreased to 100 – 110 kilometers per hour, in addition to several times we met with snowplows. There is less than a centimeter of snow on the pavement, and they are already working.
There is no speed limit on autobahns in Germany, but people are in no hurry, especially in such weather. Honestly, we were afraid to move off the track to secondary roads. And in vain.
At first I could not understand what kind of sticks with reflective tape stuck along the road. Then I realized when we drove closer to Bad Aussee. These are markers – where the road goes .. It’s a pity that they don’t do it here in Ukraine. 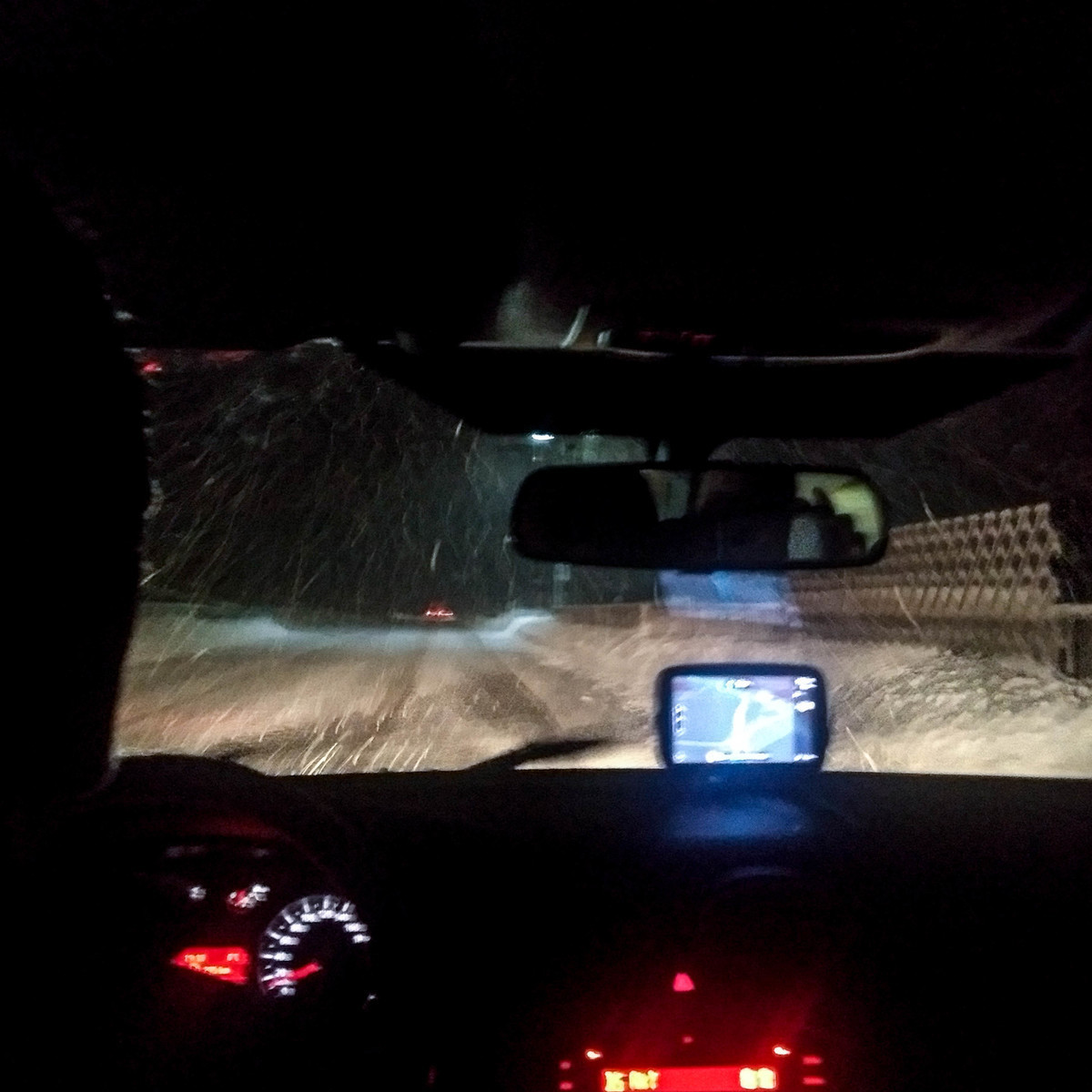 As the hotel owners told us, there are two tractors for cleaning snow in the village (as in every other village of such size). Residents on a rotational basis clean roads in the village and its environs, meeting with neighbors in a designated place between the villages. Their shift is 12 hours, they work around the clock. But the emergency services, the post service and the residents themselves calmly and with no problems reach where they need to. True, some roads for the winter are simply closed and not even tried to be cleaned – complex and avalanche-hazardous.

In the morning we thought, asked the owners of the hotel and calmly drove to Hallstatt. 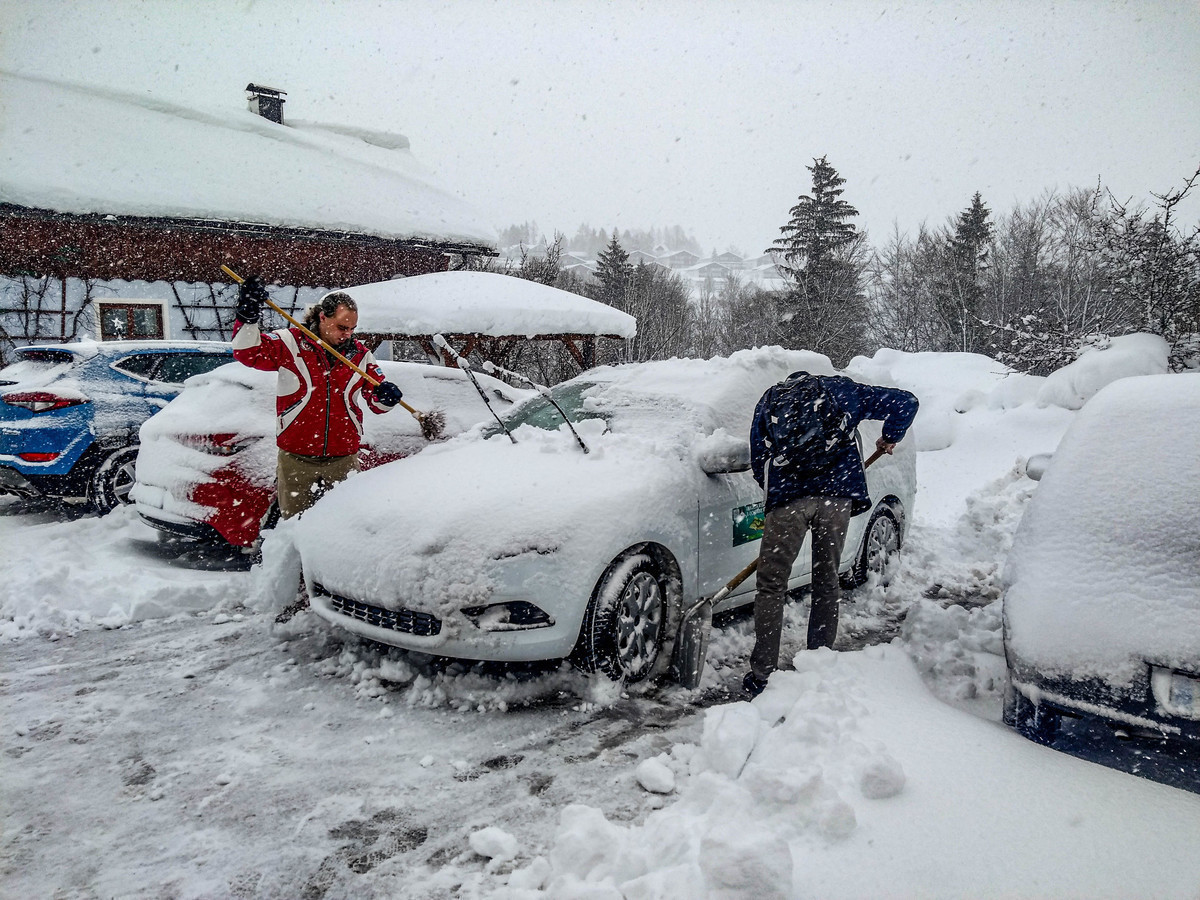 Only had to dug up at first)) 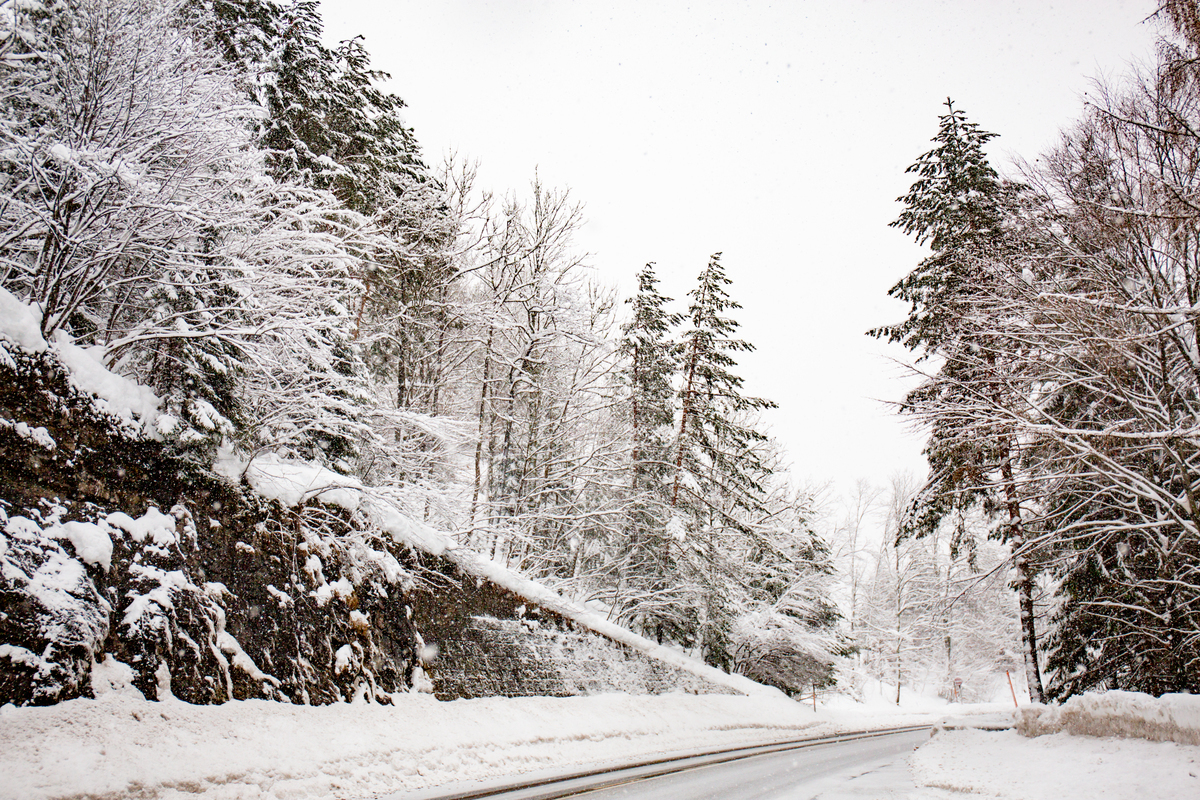 The road is very beautiful! Huge snowy pine trees, fluffy snow flakes and a cleaned road – what else could be more beautiful in the mountains in winter?))

Hallstatt itself is a very small tourist old town. Its size is determined by the distance from the lake to the mountain))

Hallstatt (Ge: Hallstatt, Bav: Hoistod) – a fair community (not a city))). It is the center of Hallstatt culture, a UNESCO World Heritage Site.
Hallstatt salt mines – the oldest in Europe, have been developed for three thousand years. Information about the village appears in written sources from 1311. About the medieval history of Hallstatt, data was hardly preserved due to its remoteness from the means of communication. Since 1595, dissolved salt has been delivered through the oldest pipeline in the world to Ebenz, located 40 km from Hallstatt.
In 2012, Minmetals Mining and Metallurgical Corporation built a copy of the village in Luoyang City, Guangdong Province. In Hallstatt itself, the amount of Chinese people is simply immeasurable – the vast majority of tourists are from China.Wiki

It is very convenient that the underground parking was made for the tourists. No need to put the car in slush, streets are not cluttered. There are three parking lots, the signs show the number of free spaces. Beauty!

For me personally, the weather was not the most pleasant – I had to take off my scarf and wrap a camera in it ..
First, we walked through the more modern part of the city. 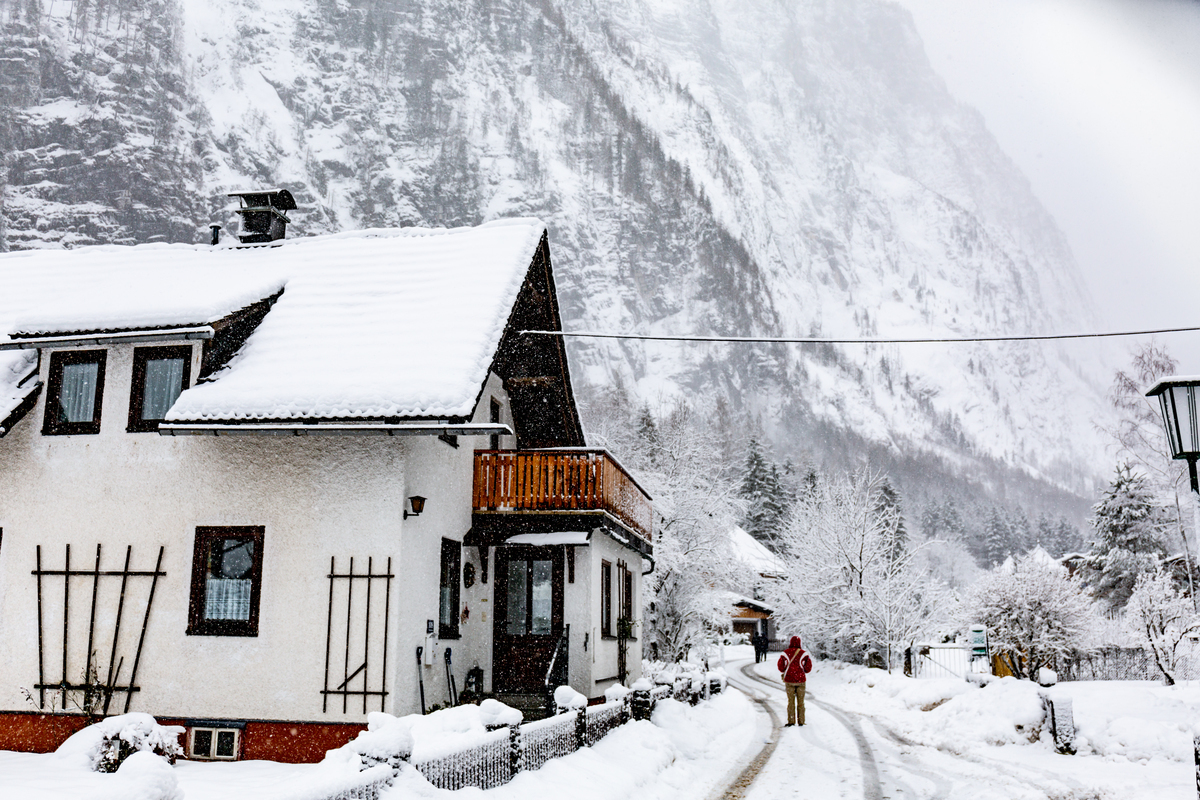 And then we went to the historical part. And again we got on a lunch break, which is not indicated anywhere .. 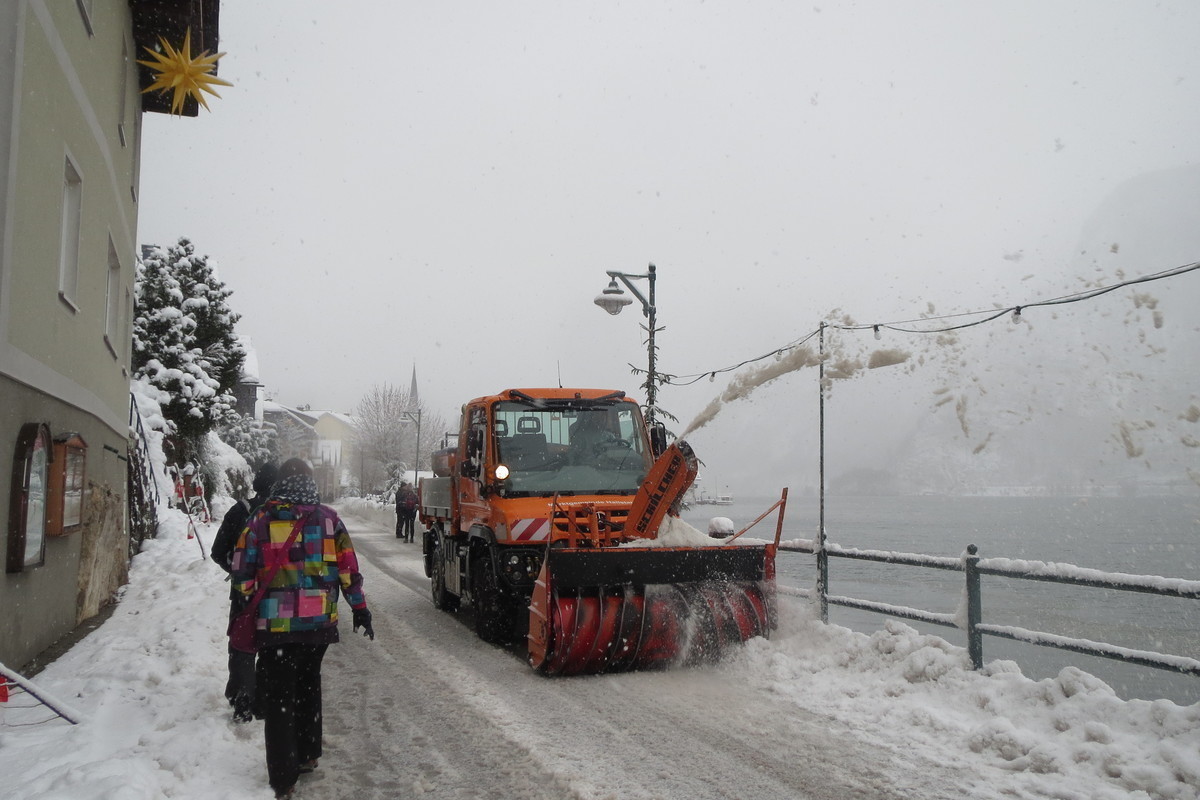 The city is very narrow and therefore many streets are climbing on a rock. 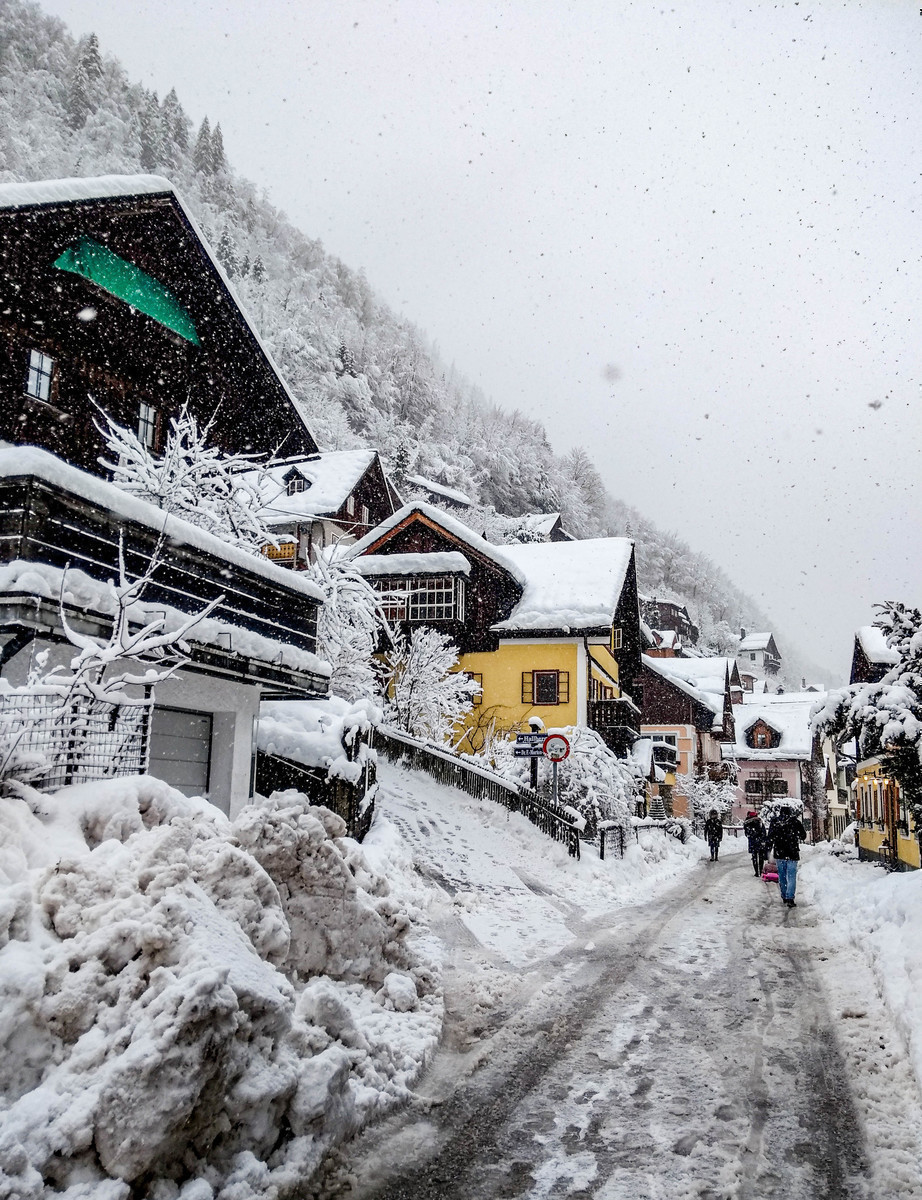 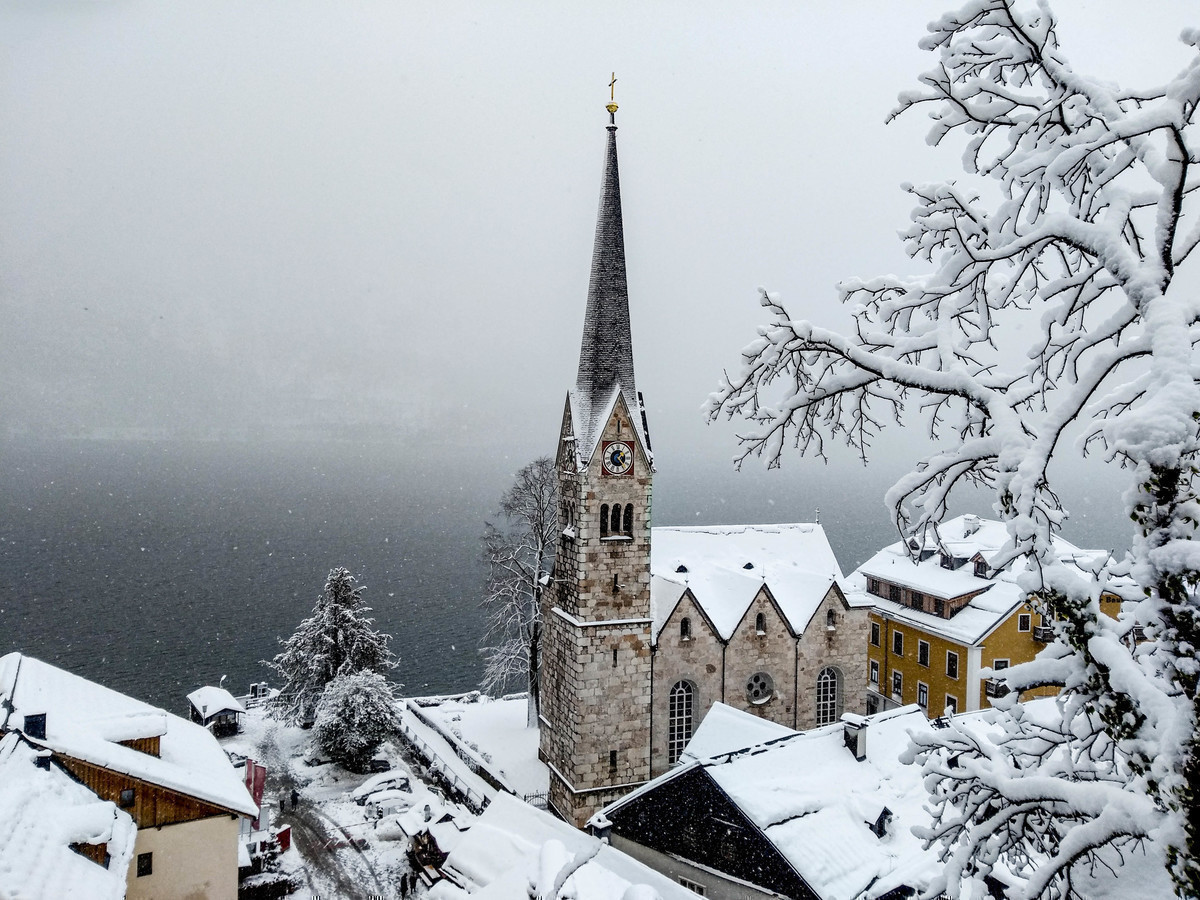 The attempt to find food ended with a rich choice between shawarma and an eatery. The eatery won. A liquid puree and a chop of the “sole” type called “schnitzel” .. But this decision had one huge plus. During lunch, a waiter came up to us and asked if we were staying in Hallstatt or not. And he said that at 17:00 the road from the city would be closed. And it was the only road in the winter .. We quickly ate and drove back.

On the way to the hotel, we leisurely drove into the supermarket for local flavor for dinner, and a very worried hostess met us at the hotel. She knew where we went and was worried that we would not know about the closure of the road. 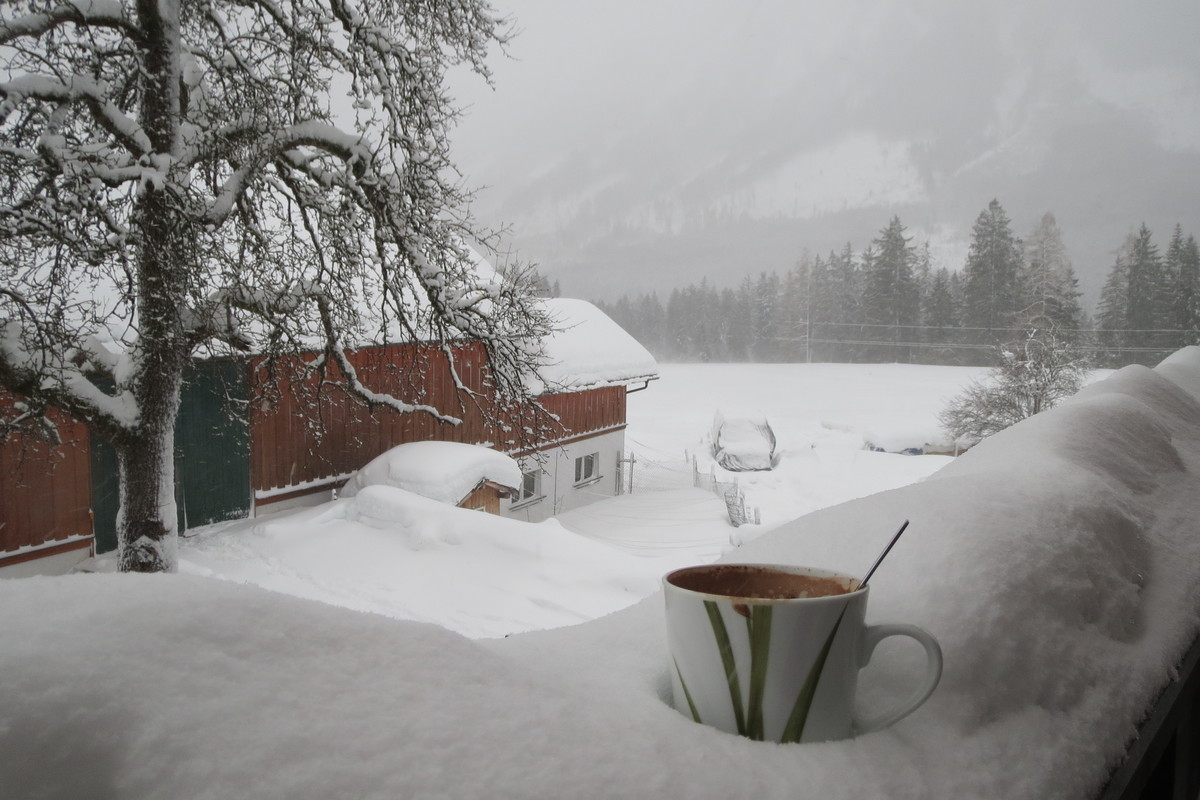 Standing with a cup of coffee early in the morning, I heard the reason of the road to Hallstatt closure. A loud, booming “buumm ..” spread over the valley. The avalanche came down and closed the passage to Hallstatt for a week. How well we got there .. Or rather, from there)) And it’s not a pity that the lifts didn’t work up there due to a snowstorm – we will come again)))

Quite calmly we drove towards the Czech Republic. There we had to visit some more interesting places))