The story about the axles and the suppliers

This story tells how I managed to understand the axle structure, quarreled with a few suppliers and found contact with one remarkable seller of american spare parts.)

After the car purchase, the axles were checked twice, announced to be properly working (both after the first and the second car check) and this issue was laid off for the later consideration.

The fun began when I visited a guy whom I met at the Retro-exhibition. He told me that he had his own service that works with the americans and that I could take a look if he had anything from my “necessary to get” list. My decisive and instant “no” (service-wise) definitely paid off later. For the one thing (and the main reason), – I do have a great service-place with nice, and reliable guys that I already know; for the second one, – the “Service that deals with the americans” appeared to be an odd far-away garage with a whole bunch of trash everywhere; the third reason is the fact that this man was too much of a crazy DIY and bizarre tuning fan; and the last, but not the least – I haven’t found a single thing for my Dragon. But. He asked to show the car’s belly simply out of curiosity, and so I did. “Oh, your back axle shank doesn’t look too good. Would you like me to fix it?))” Thanks, man.

So I headed to my favourite service guys and told them about this situation. They put my Dragon up and looked it up. Then, the untranslatable flood of words followed on the issue of both the man and themselves; they regretted that they hadn’t checked the car again after N kilometers, and grumbled at the man for letting me go when the situation was so serious. As I learnt from them, the shank began to fall apart after the sudden use (the previous owner hadn’t been using the car for quite a while). Then the new shank was ordered from the locals. But, as usual, it took 3 weeks to get to the place. The car was out of work. Then the 3 weeks went by, and the part previously checked by VIN and the catalog arrived. So we placed it to the correct spot and Oops! It didn’t fit! As we later found out, someone incredibly bright had decided, that I owned two similar axles and ordered the 30 one without checking or reading about it in advance (right, why in the world would the supplier want to read something about the unfamiliar car! And we foolishly trusted his words). Of course, we returned the part, but reordering would have taken another 3 weeks. Luckily, we accidentally found the necessary shank the same day in the net. The one and only in the entire country )))) So we bought a brand new one in a flash.))

The dreadfulness of the situation was that we put everything back together as it was. And I started off towards home very cautiously. In the middle of the road I’ve heard odd clanking and screeching caused by the bearing being broken into pieces by the axle gear (the autopsy showed that the collar has thinned to the paper state and there was no choice but to pick it up from the reducer bottom)

In the end, we have the conical bearing that had fell into the reducer and its rollers were carefully ground up by the gear pair. Unfortunately, two of the cogs were damaged in the process. One on the bigger gear, and another cog on the smaller one. 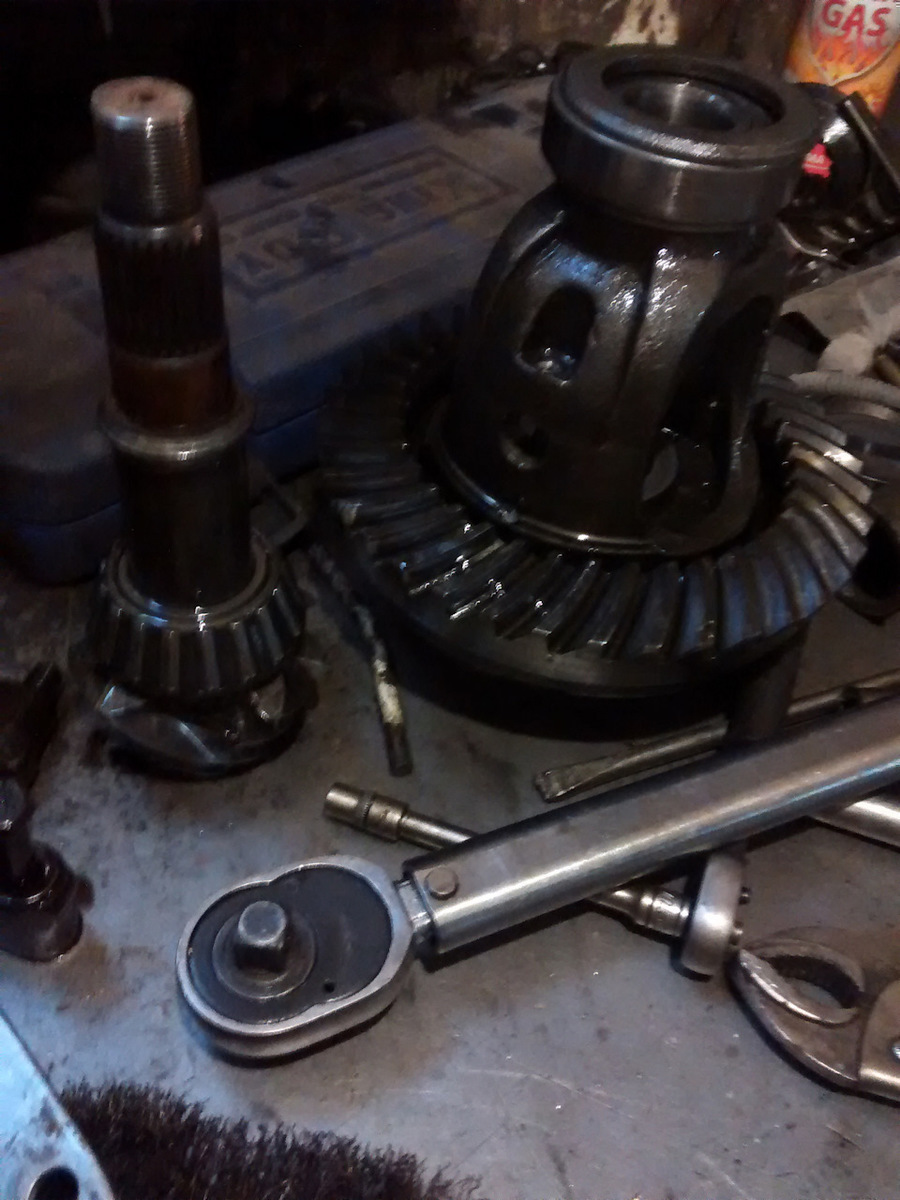 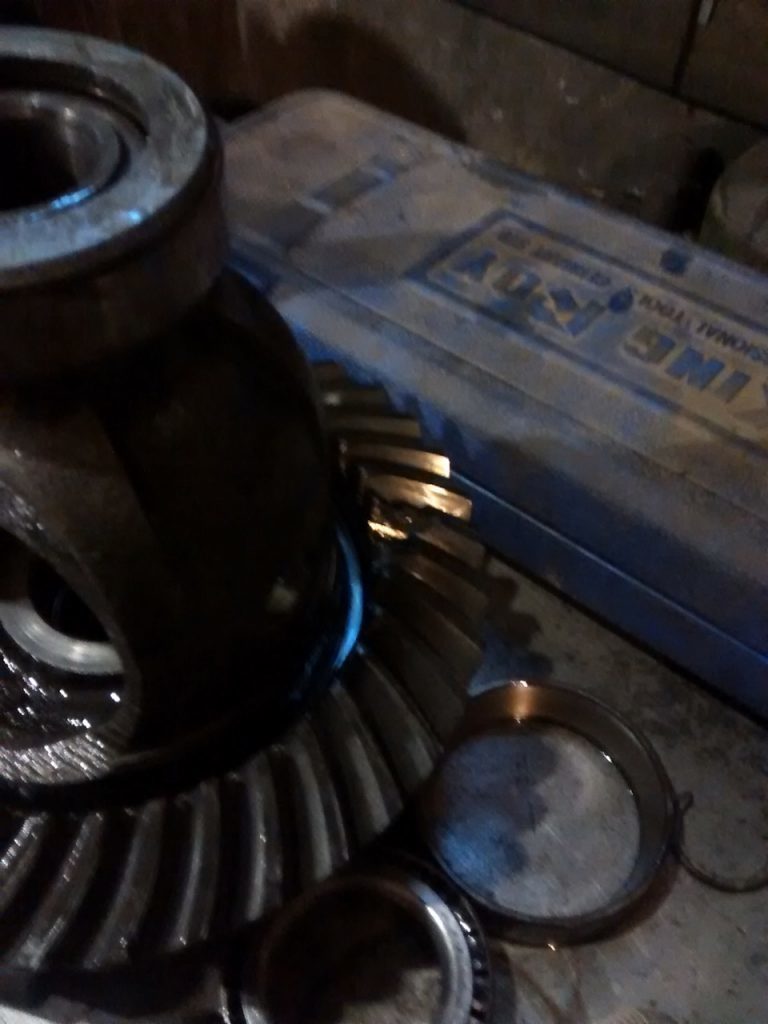 In result, now we also need to find the pair and the bolts to it, since we’ve found the lack of them. I need a 4.11 For DANA-35 and the entire set of the bearings, stuffing boxes, etc. So I  start the search myself; and that’s when I both read, ask around and research – because all I’ve managed to find here – is a 3.73, and mostly for DANA-30. Besides, they have other slots and some other differences. No local suppliers have the information about these details (at least none from the ones I knew at that moment had it, because they were into different kinds of stuff). In the middle of the “online nowhere” I find a guy who orders spare parts for the americans into our city. I write him THE EXACT characteristics of the pair – the cogs quantity, its marking and all, I pay the money and order some bearings from him as well.

To start the intriguing story, the door lock comes instead of the screws for the pair… Well, ok – he re-ordered everything himself. And you know – it takes about three weeks to wait for the order to come, just as everywhere else. The pair arrived, we took a look at it, packed it back up and started waiting for the screws and bearings to come. How naive were we! We didn’t bother to count the cogs at once. We were too naive, really, for we counted on the fact that we gave the exact numbers, and everything had been agreed on and approved.

So we took all of it, brought the car to the service, took it apart… And – oops, that’s the ‘shovel’! The pair appeared to be 4.10. Not 37/9, but 41/10. I called the guy, and asked – what the heck? And he answered that nothing awful had happened! Our fight reached the point when his expert called our guys in an attempt to persuade them there had been no problem. But as it came out, that had been acquainted a long time ago, and everyone agreed that yes, the situation was quite crappy. But the other side of the shovel was that more than a month had passed (3+3 weeks). And he said that he wouldn’t take it back, and that the ones I needed were not made anymore and that he wouldn’t give the money back either.

I was more sad than ever. All of this time I was forced to drive quietly, peacefully and carefully with the remaining pair, since the cogs were not damaged too badly, and did not try to break further. This type of driving was dull and boring as ever.

So I’ve got no choice. I had to solve the problem somehow. I was sorry for the money, too – it wasn’t 5 cents, you know. I decided to find and install the 4.10 to the front as well. I started looking for it via all possible forums and ads, because I did not wish to wait another month. And that’s when we found a guy from the Jeep-forum who appeared to be educated, relevant, polite and nice in communication. He did understand the difference between the 4.10 vs. 4.11, and he gave us the choice along with the full description of the difference between the possible producers. And, – the most pleasant thing was that it all arrived in a week ))) Oh!

And here we were back in the service; the Dragon nearly ‘undressed’ by itself )). This time everything worked well and fell into place. We found another ‘shovel’, though – the front pair that had been left from the previous owners was 4.10 )))

We installed the brand new one to the front, and left the old one in reserve. The process was accompanied with some serious histeria all the way). The laughing one. Most of the time).

The car is happy now, and so am I.