Just as we promised, we were determined to organize a car run in the footsteps of our previous expedition.
Despite the fact that many of the participants had said that they would not be able to go, everything worked out fine, fun and interesting in the end))
We had three cars this time – the Patric, the Patricia, and the Eggplant. Most of the way the Patricia was piloted by Igor Bolotov. I took the navigator seat near him and had my joyful share of absorbing the knowledge and the skills via direct experience and observation)))
And there really was something to look at, as there had been a heavy rain the night before, and all of the dust that was trying to get stuck in my nose, eyes and ears turned into a solid mixture of clay and black soil))
And now I’ll tell the story chronologically:
It was an early morning (as usual), everything’d been collected, stuffed, packed, and we’re heading off to the meeting spot. 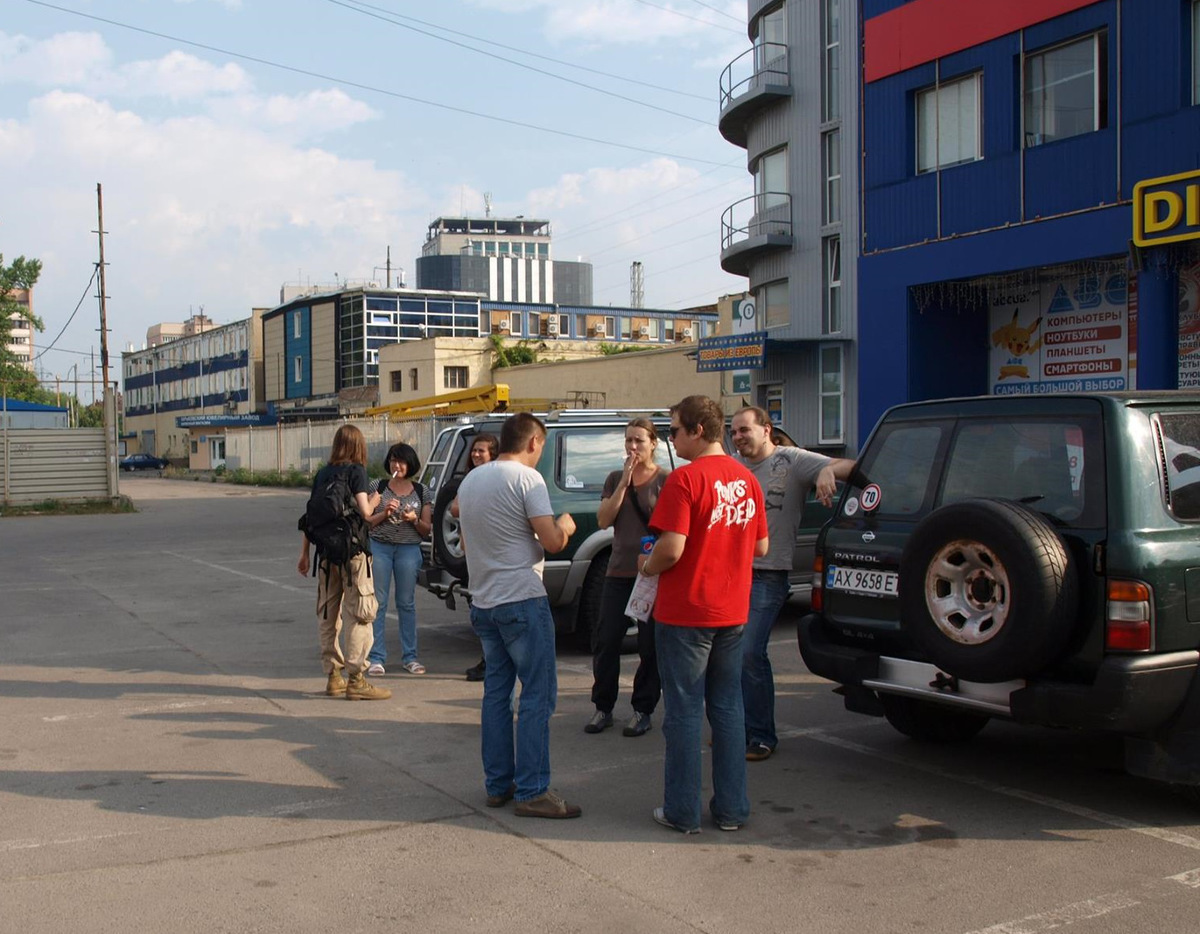 The adventures began at the very beginning of the trip – the minute all of us took our places in the cars, Patric’s accumulator decided to die. That was not the first time it had played this trick, but it was definitely not a good time for it. The Mister-on-the-Eggplant jumped into his car and drove off to get some charging cables, but our cunning Ace managed to fix it all up without them. We took the accumulator off the Patricia, started the Patric, and placed the accumulators back) 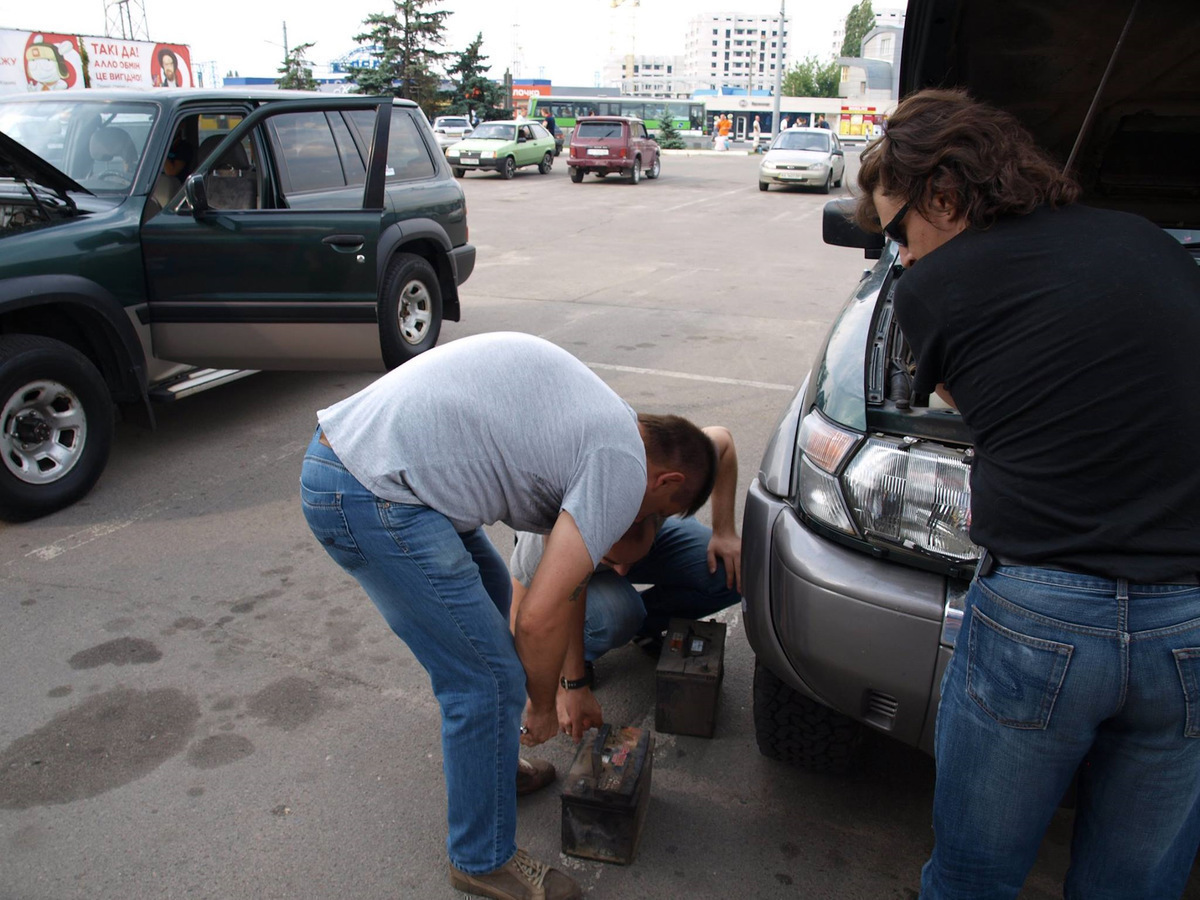 The process of emergency starting of the capricious elephants)

Later there was the already familiar road (the one that is actually not-) to Bogodykhov, Akhtyrka and further to Lifino.
This time the pads gave some hard time to the Eggplant)) 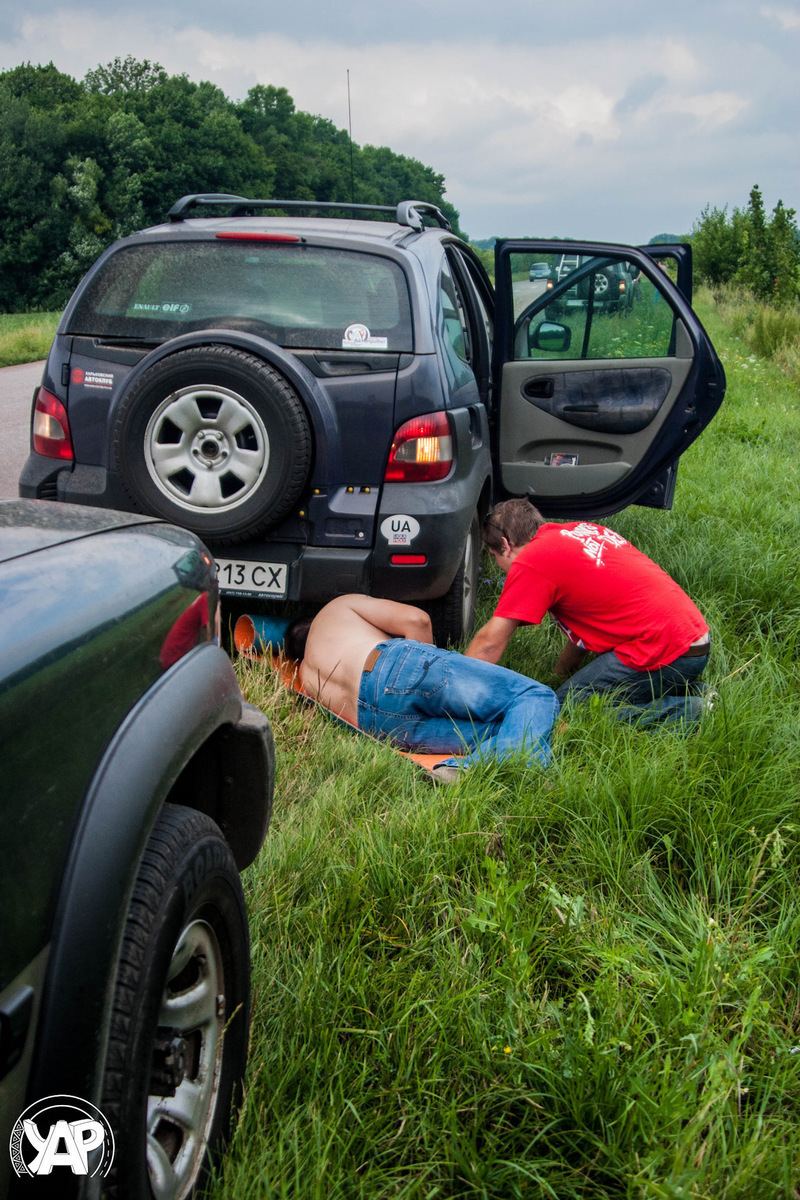 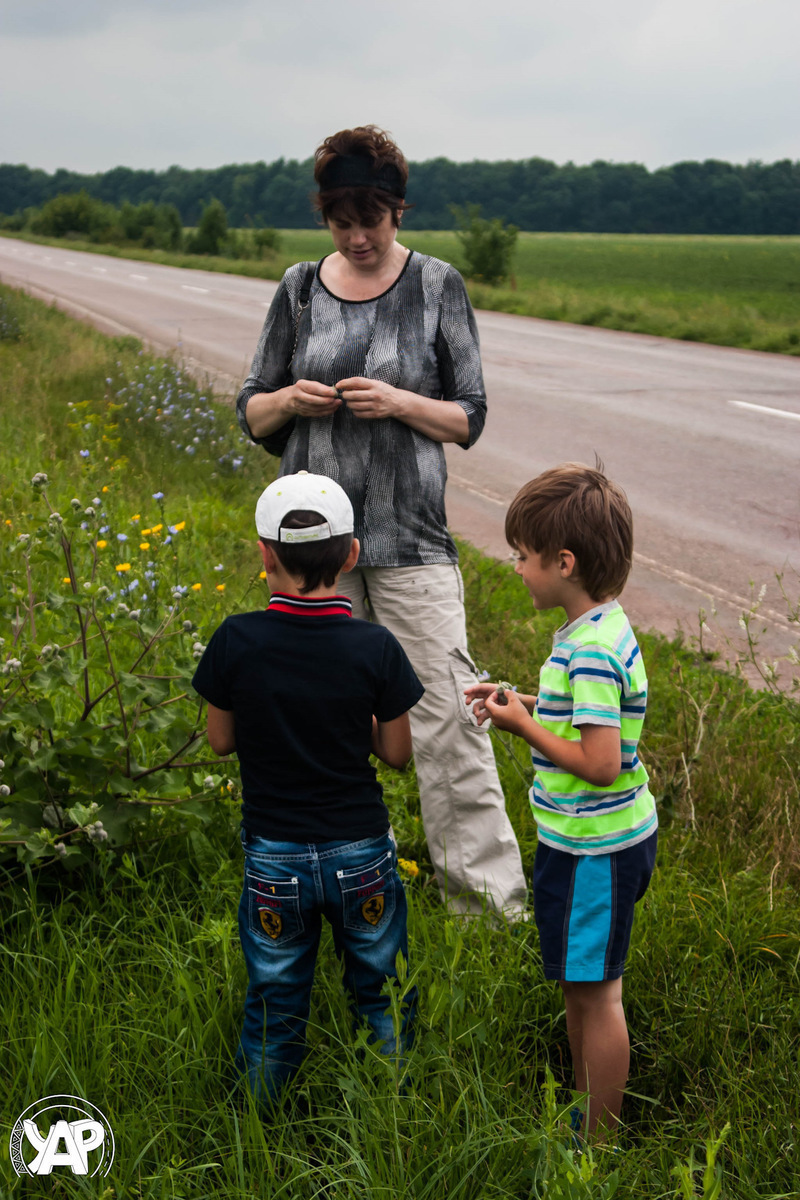 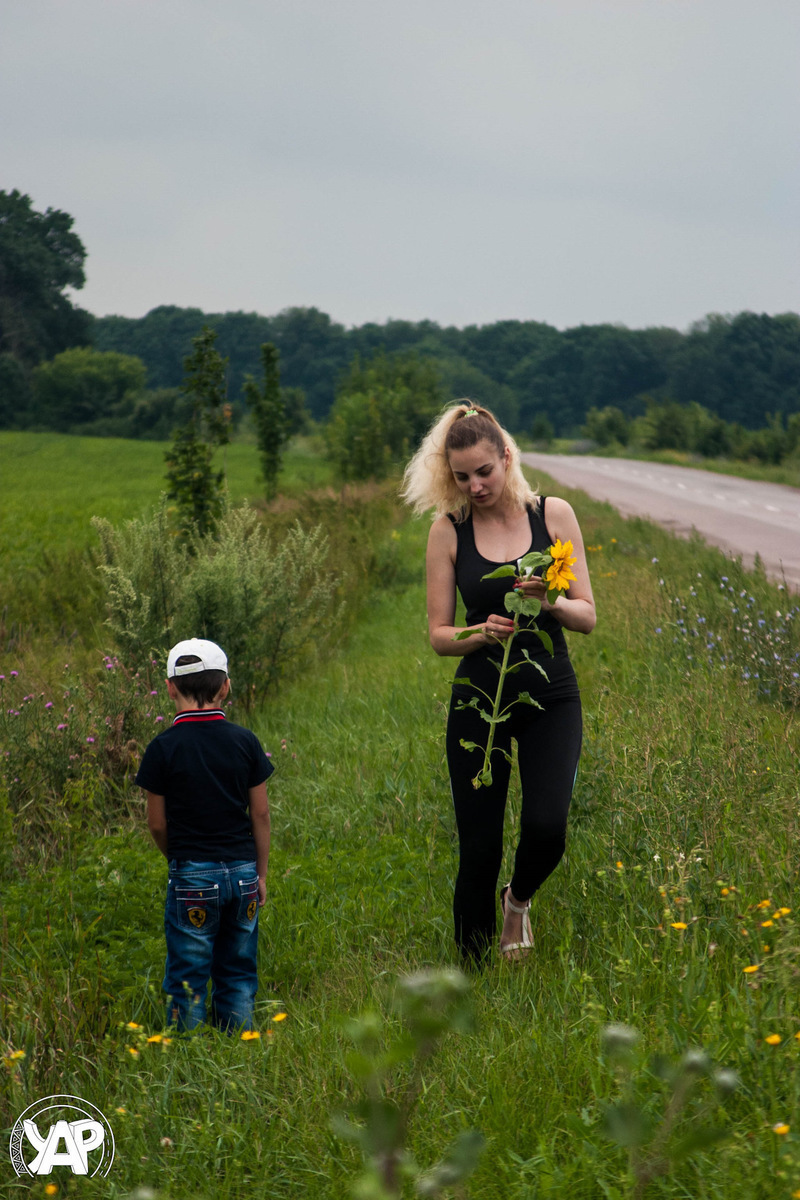 The way to Lifino was thoroughly washed off – the minute we went off the road into the fields, the fun started. The Patric was first to go, and he graciously granted us the “drunken snake on a walk” tracks. He was followed by the Eggplant becuase of the pilot’s skills, and we were finalizing the company with our flat tyres))
Oh, it had been such a fun – all the 40 km of it! Up to our ears)) The kid on the backseat kept yelling “C’mon, uncle Igor, hit the gas! We’ve got to be the first ones!”. In the end he came to a conclusion that our pilot was no less than Optimus Prime, which gave us all a feeling of happiness and pride)) 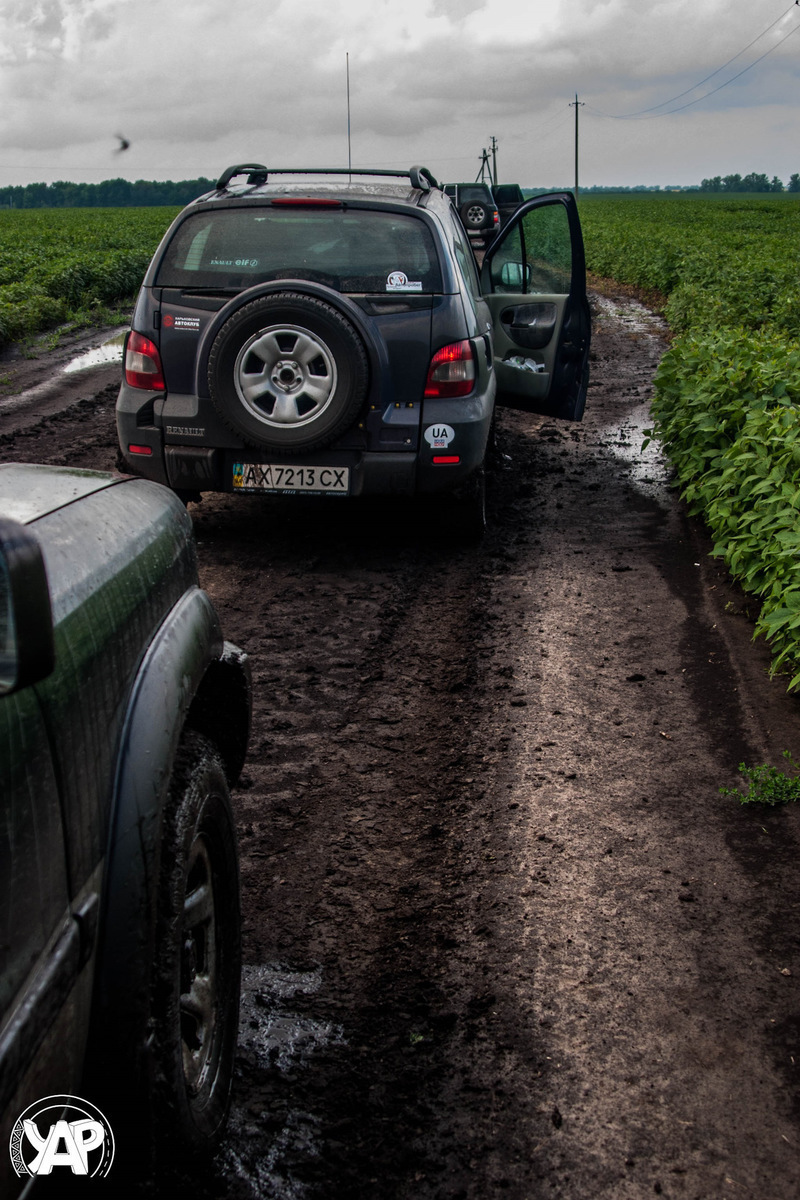 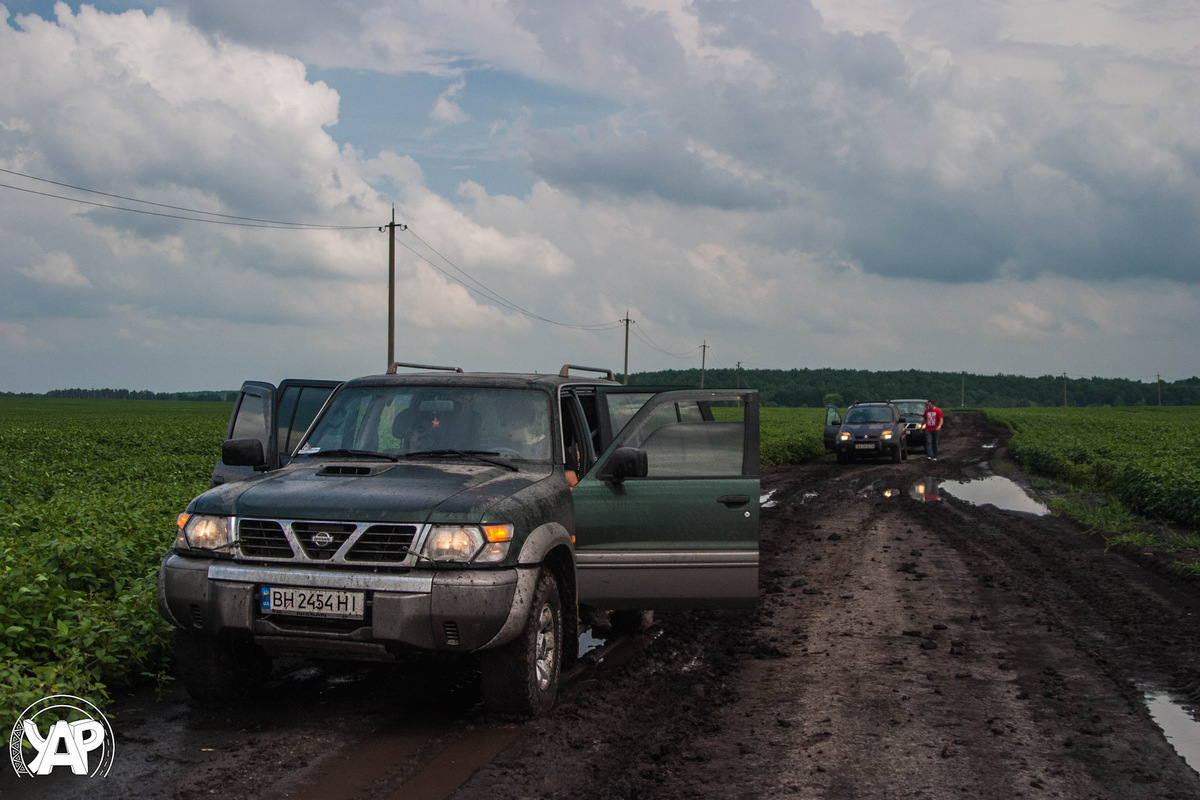 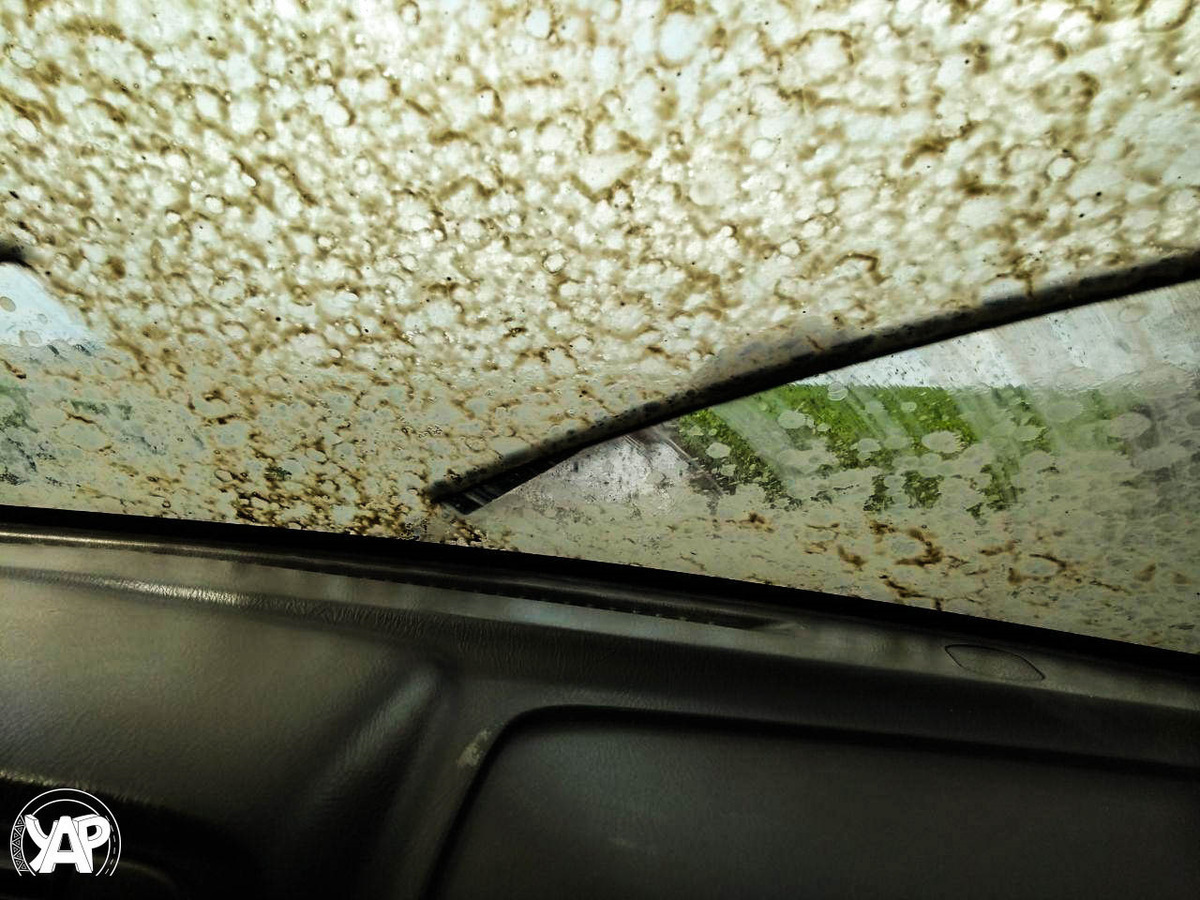 The downhill was as clay-ish as it used to, – but there’d been much more fun this time: 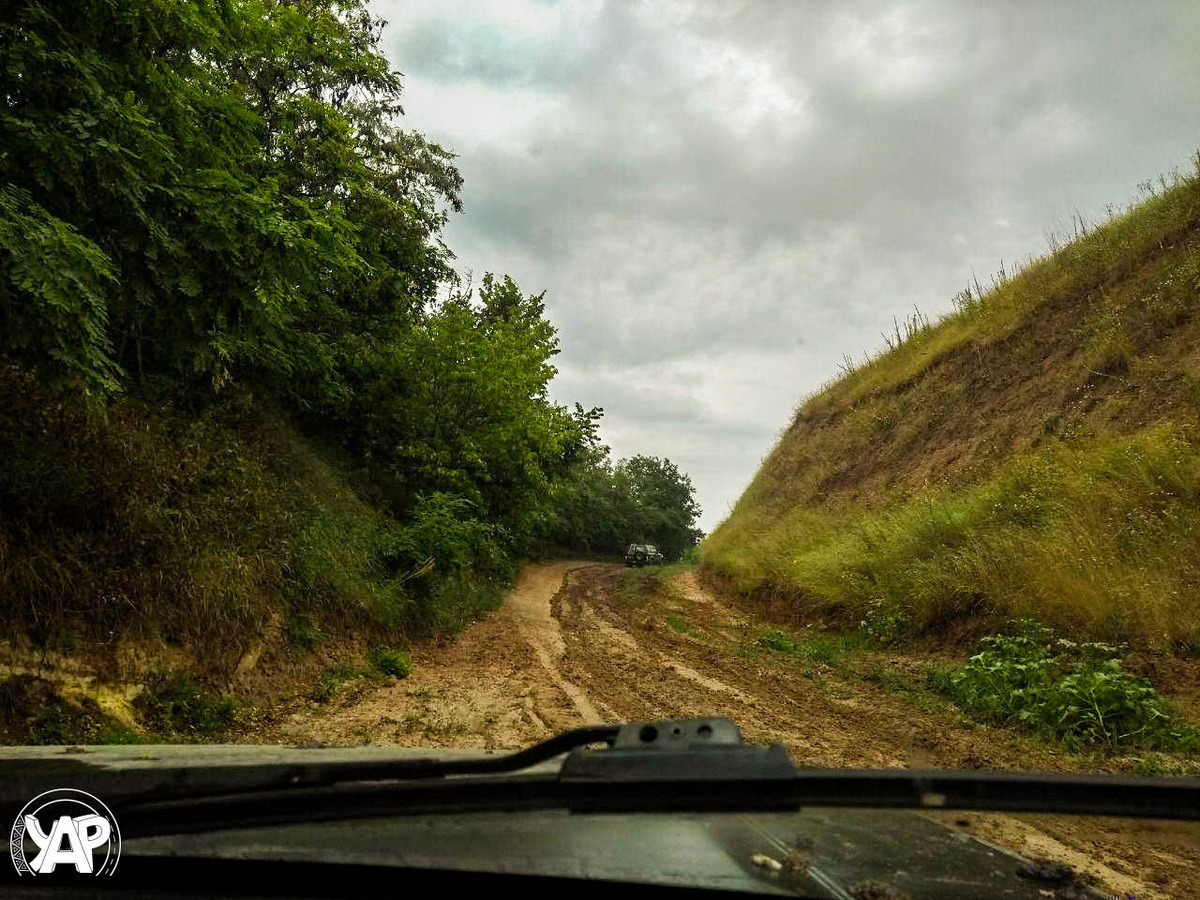 Once we arrived there we had a nice walk around the manor and had a remarkable lecture on Sloboda nobility and other stuff from Anton Bondarev. The lecture had been very interesting, indeed – personally, I did learn many secret things and it was a thing of great interest for me))) 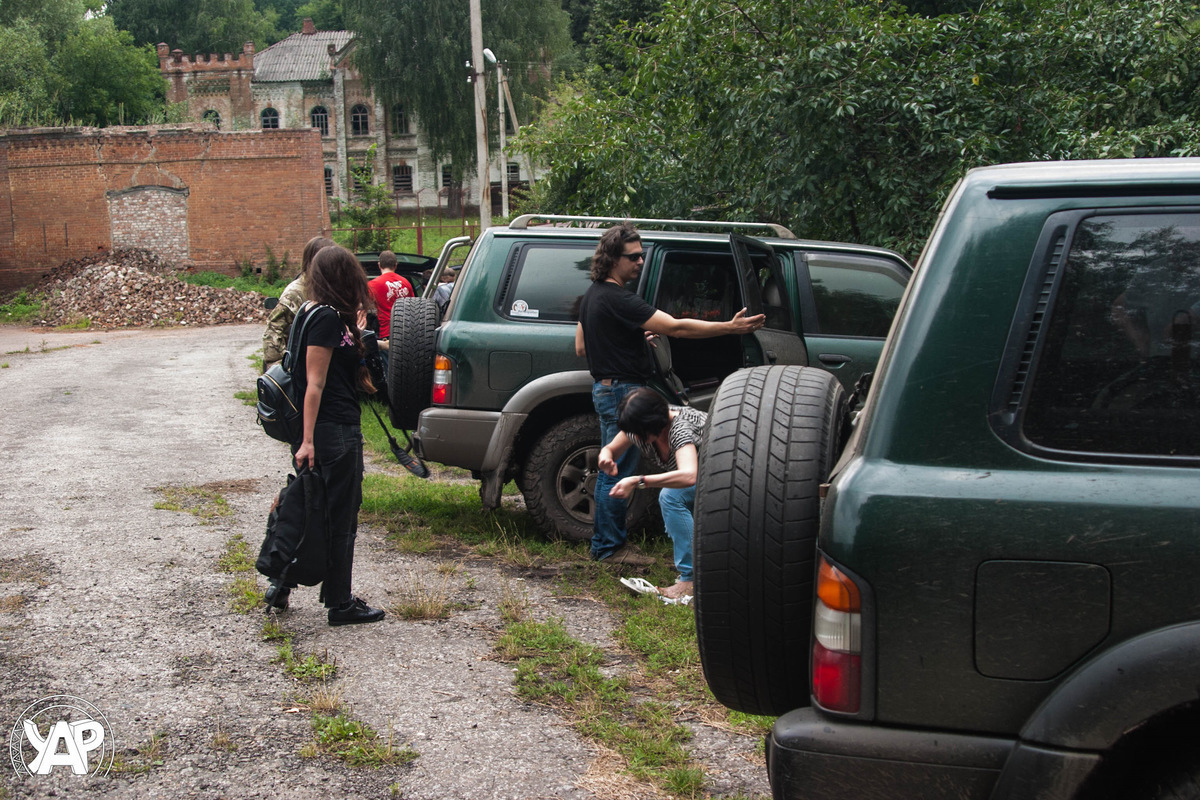 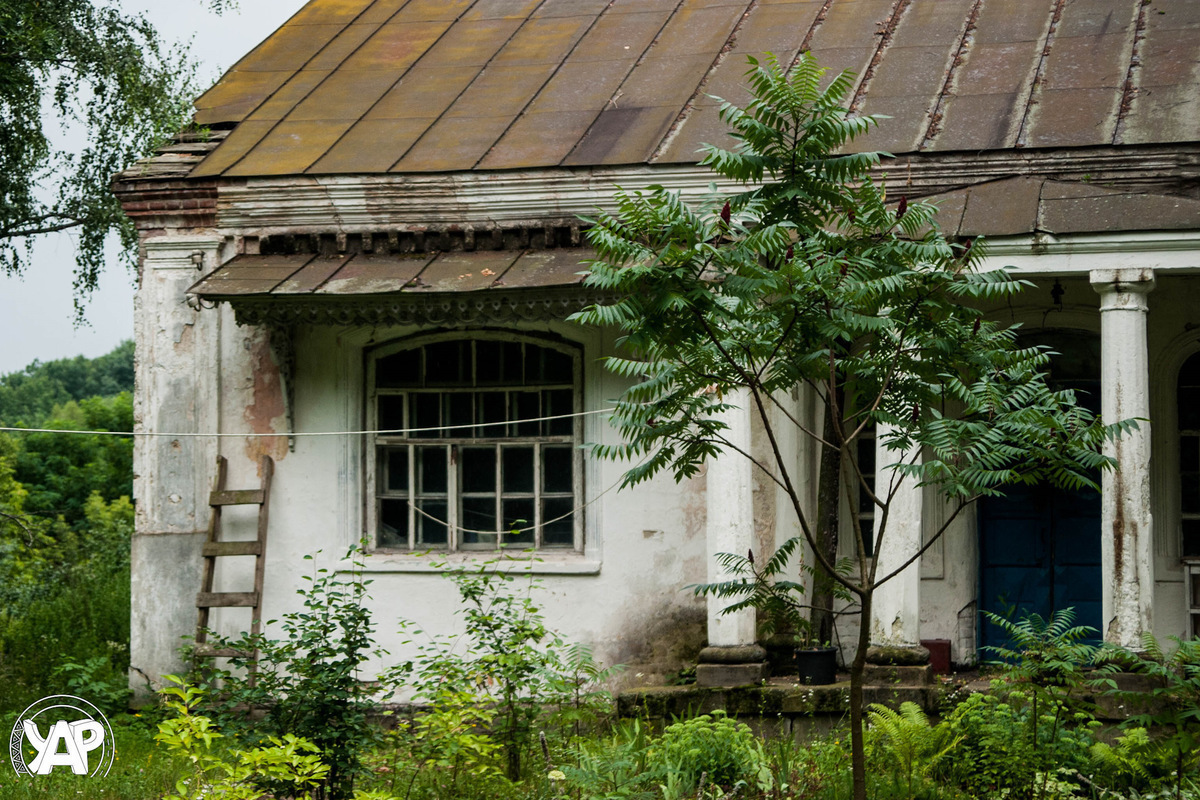 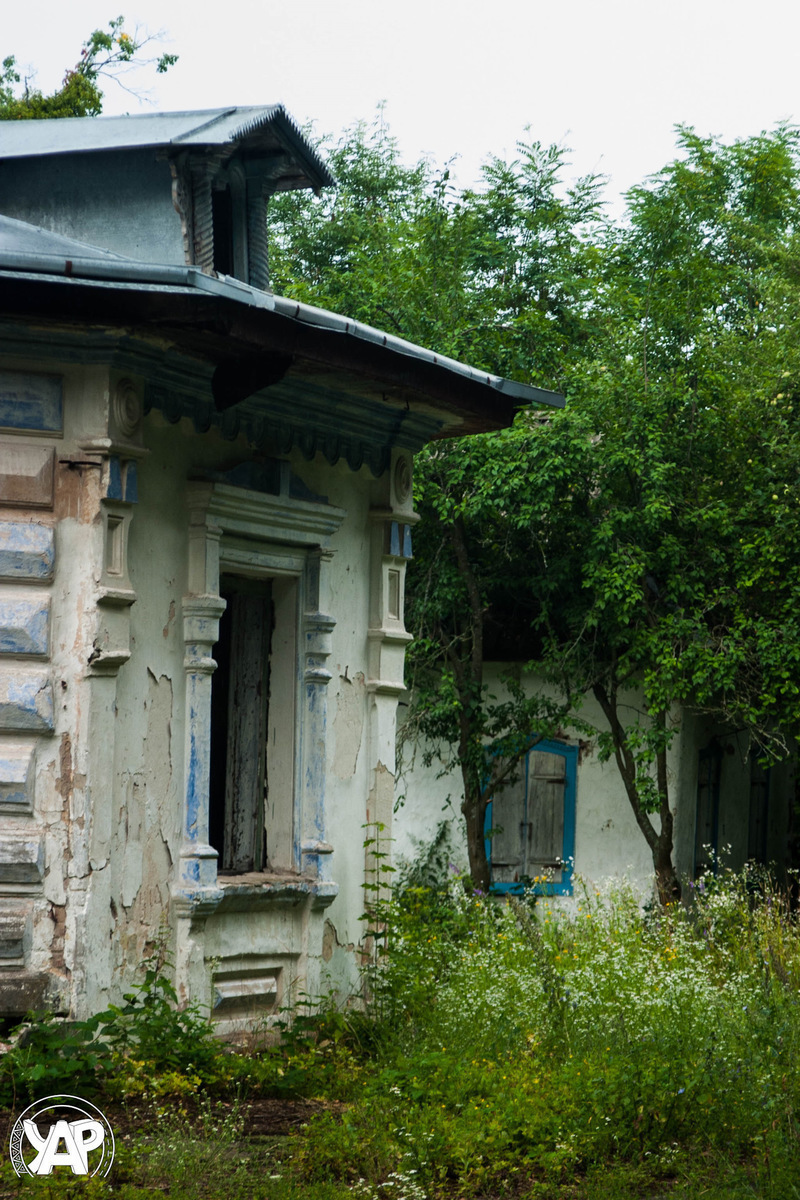 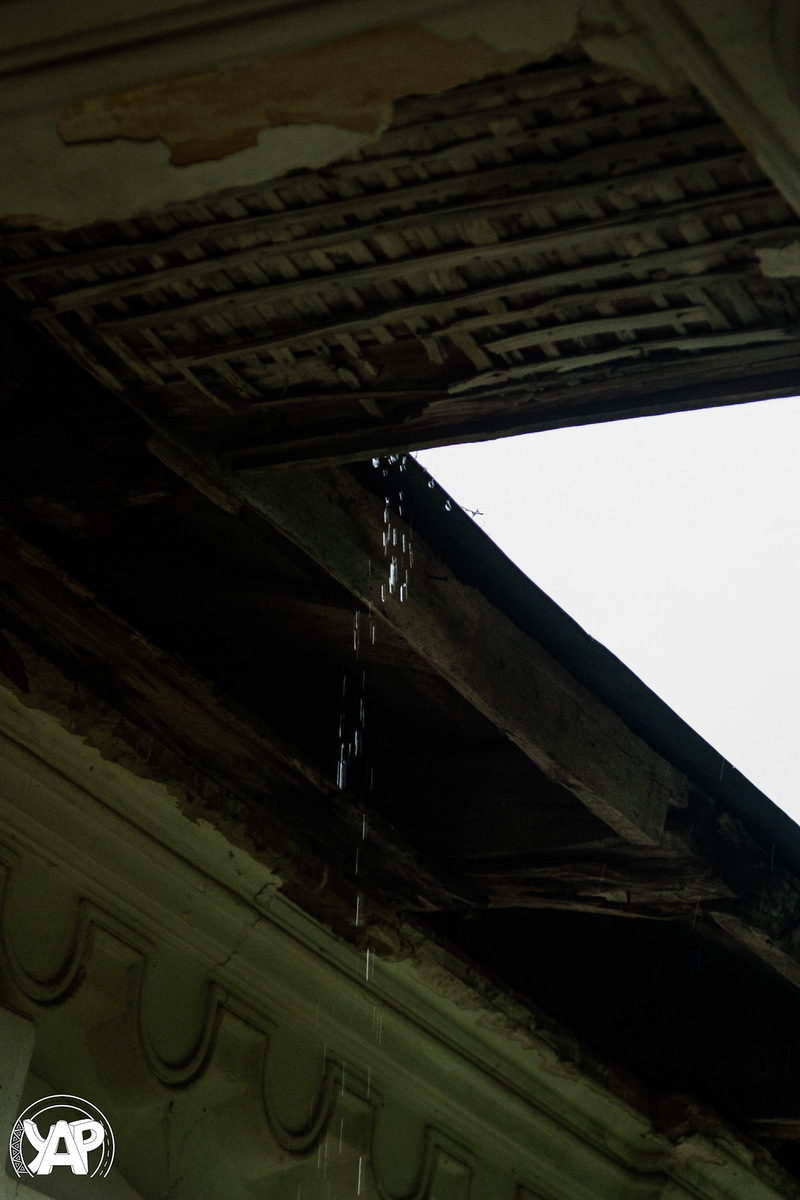 While we were listening to it, the rain had started and we decided to go to the lake in order to avoid the heroic mud racing. 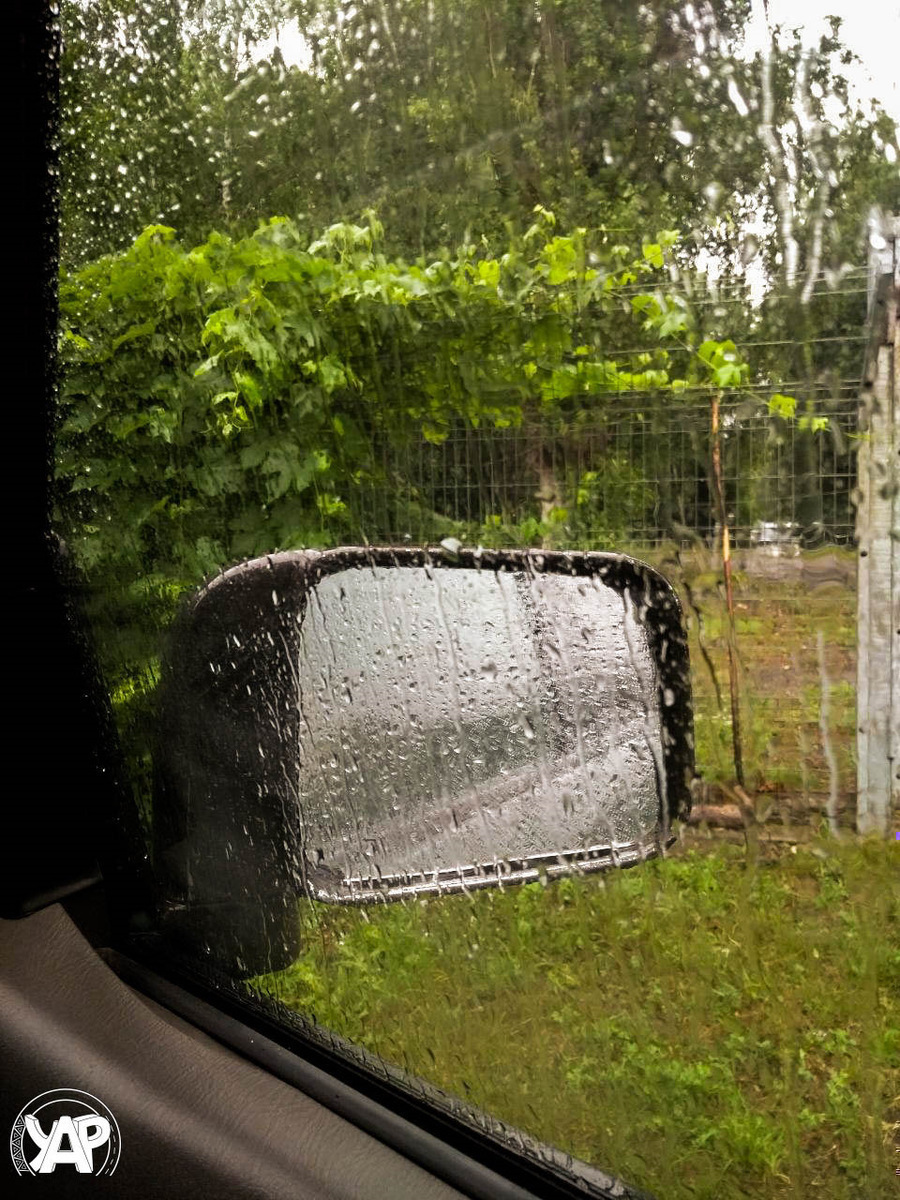 In result, while Patric was assaulting the completely wet uphill with his goodreach tyres, Igor took the gentle slope with some grass on it, and simply drove around all that heroic beauty. We were followed by the Eggplant and the tired-from-the-pathos Patric)))
This action saved us and our passengers from the opportunity to drag each other by the straps and other kinds of mad fun. Our passengers had had enough fun already from trying to overcome the pits “on the go” and from wriggling in the wet mud. We didn’t want to risk turning the motor-rally into a full-scale trophy without any moral preparation. Besides, everyone was madly fond of the idea of having a picnic – we hadn’t eaten for 8-9 hours by that time)))
We were trying to find the Shelekhov’s lake which had stolen our hearts with its gray ferons, for just about as long as the previous time. That’s because the place was a white spot on all of the maps – not a single satellite was detected by our navigators. I don’t remember how many kilometers it took to drive around the fields with the identical turns “to the left from the planted stuff”. I don’t remember how many of those turns we tried, before we found the necessary one, marked by the forestry sign… We looked at it, turned around and went to the Lebedyn’s “lake with the white sand”…
The way to the picnic had gotten longer for about an hour or so))))
On our way we happened to get to another lake with no white sand but with fishery instead)) And why did that happen? It happened because I did not take care about learning which one was exactly the one we needed (because I was naive enough to believe we wouldn’t need an extra option and that we would spend time at Shelekhov’s), which I madly regretted.
But we overcame all of the obstacles, found the white sand near the lake, – it should be a great and beautiful place for swimming in the warm weather))
The most interesting thing was that while we drove to this magical place, we were making a whole lot of jokes about the necessity to call the Heavenly Administration on the issue of the non-stopping rain…. So – we drove to the spot, got out of the cars, and – the rain stopped! Many thanks to the Administration for accepting and working on our request!))) 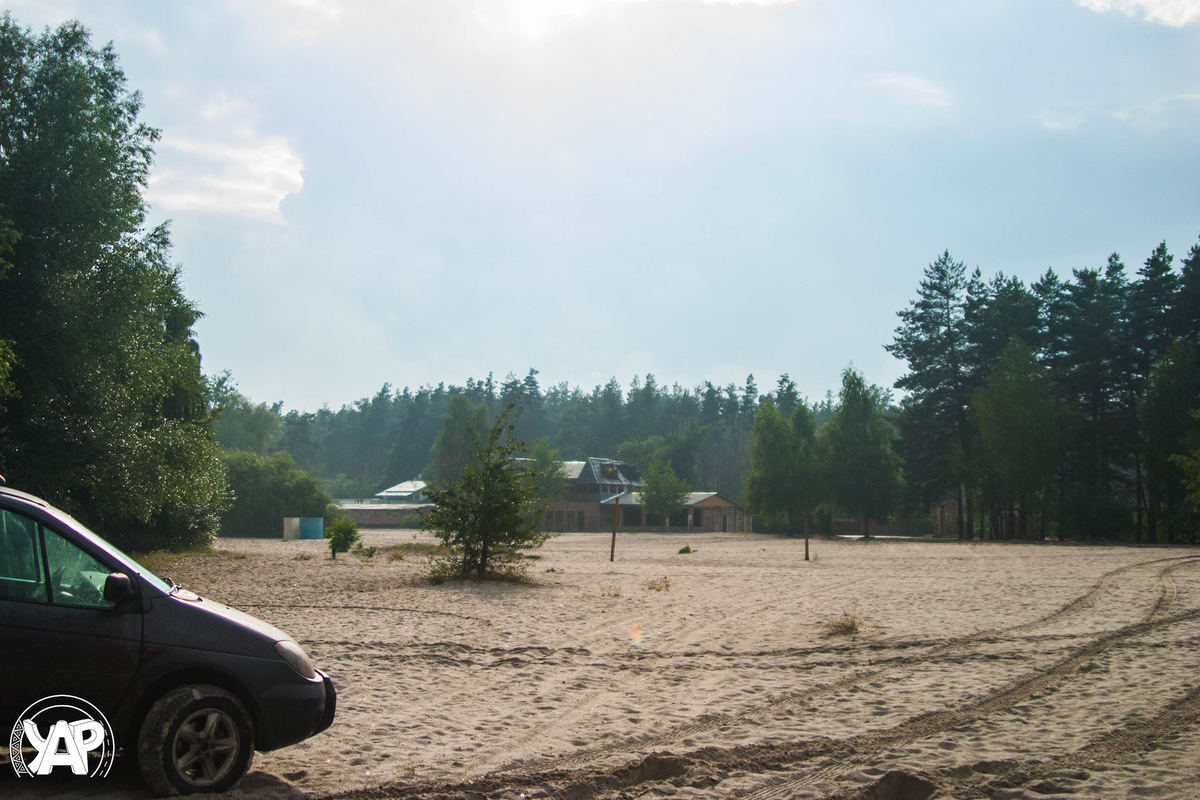 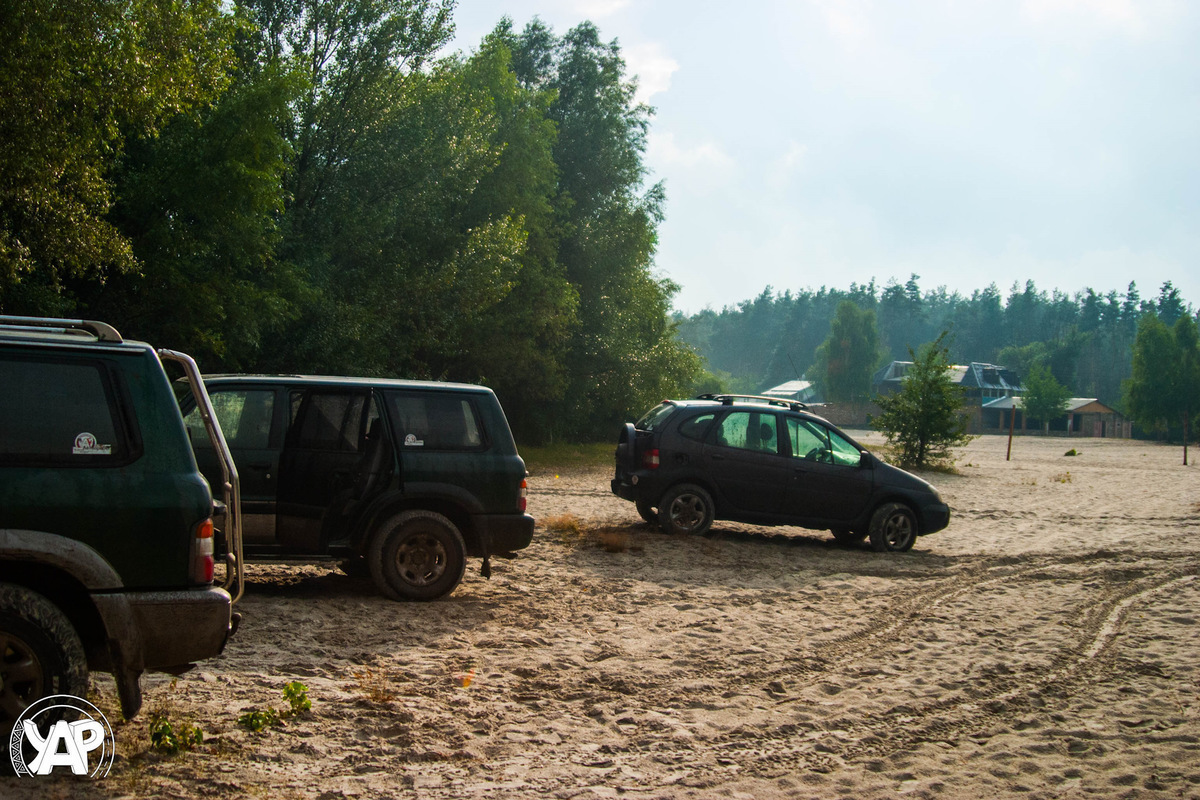 Unfortunately, there happened to be another sad surprise, that our team managed to turn into the reason for a laughing hysteria – there hadn’t been a single alcove/bench anywhere in sight – the beach was sterile in these terms!
But! I am prompt, energetic and devilishly cunning! So we organized a table from three spare tyres and a pallete found on the spot, covered it with cloth and feasted in a royal manner) Barbeque, baked eggplants with cheese and garlic, grilled mushrooms…. mmm))))
It was a great and silent pleasure to eat it all – not only because everyone was incredibly hungry, but also because Igor cooks it all very well)) 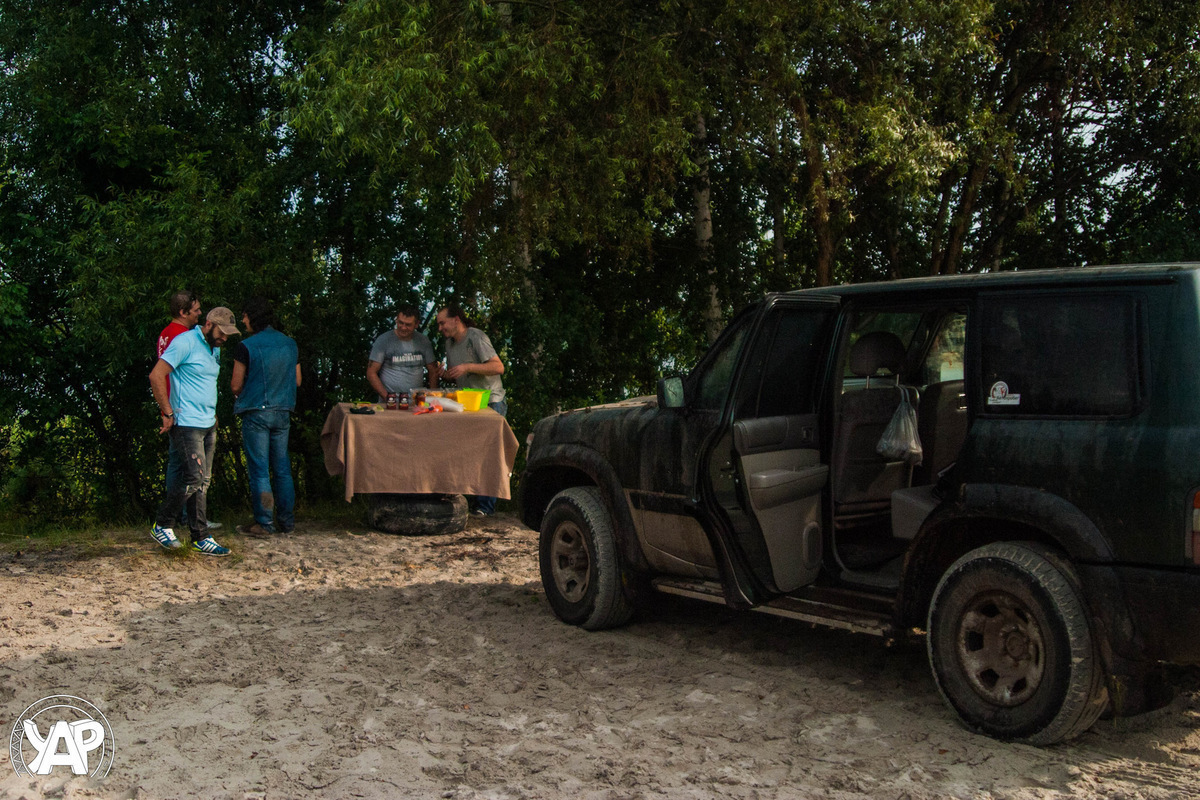 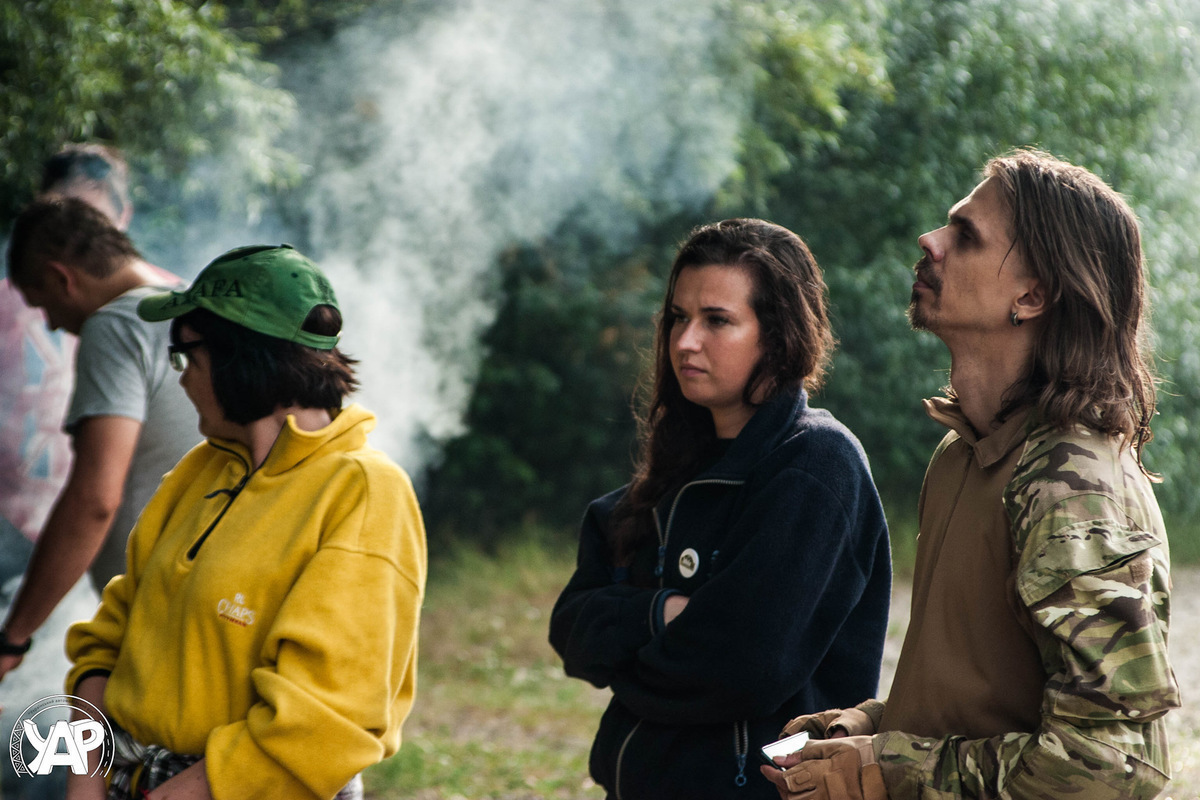 When I was writing the time-table for this event, the last part of it was declared as “20.00 – the latest possible time of heding off home”. 19.45 was the time when the rain started pouring again. We packed up in 15 minutes and started off home. Naturally, the nearest n-kilometers the only topic of discussion was “The request had been fulfilled by the Administration. Hope you enjoyed your stay, and good bye”))))
The way back was just as uneven and wrinkled as before. And it was dark and wet. The speed of our trip was regulated by the Eggplant – we’ve sent him first, as the most tender and weak one))). He was rather active, though (he did manage to cope with all the stuff on the road). In any case, the shredded asphalt coating cut the heroism down to 40-50 km/h.
When you drive your way to Lebedyn-Akhtyrka, it seems to be a forlorn ancient forest road. It is a very narrow stripe of ruined asphalt, sided by huge bushes. The most of the roads in our country have a grass line on each side of the highway, followed by some fields or trees. This road had the bushes right next to the road))). And there were not that many cars at that time of the day – we’d only met about a dozen of them.
We also helped some sedan on this road. We got the smallest jack possible, helped to push the car up, and the guy managed to replace the broken tyre.
Just as always, the fact that we were the only ones who stopped, was very depressing for me. Later on the road someone also wanted to buy our spare tyre, but the sizes didn’t fit, so there was no way we could help them.
Somewhere in Akhtyrka we stopped to drink some coffee (at some gas station), and Igor went to sleep. I took the steering wheel instead.
Having returned to the city, we took all the passengers to their homes and went to sleep around 2am.
Of course, we went to the car-wash the next day))). The guys already know us well, they love us and ask for details at once – “Would you like the “as usual” service or a light wash? The “as usual” option is only available in the evening – to give your car some extra time.” Sometimes it’s 3, sometimes 5 hours.
As far as I know, our passengers did enjoy driving with us)) I have heard some alternative names of the expedition – “The Historical Sloboda Safari”. Well, we don’t mind! 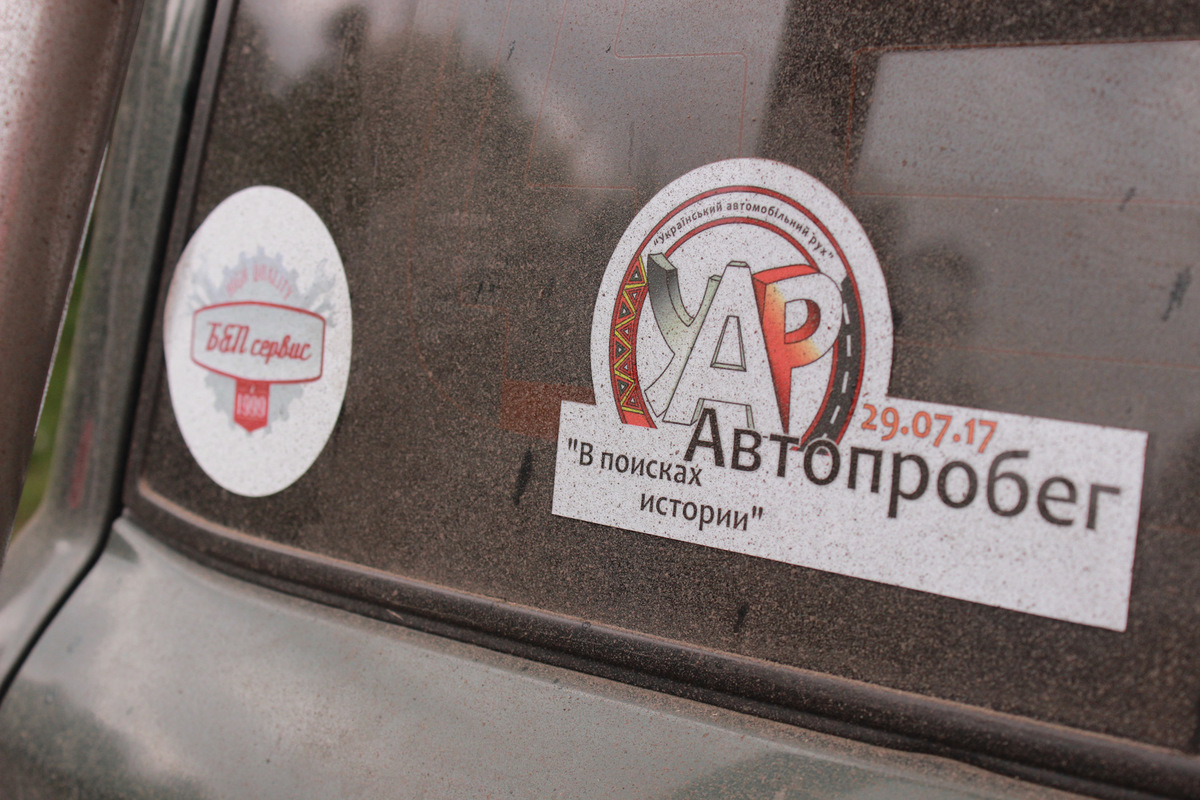