Everything started with the phrase “I think we’ve stayed home for too long”)) Anton Bondarev mentioned the abandoned Alyosha farmstead near a beautiful lake that has no road to it))) This time there was a lot of proof of the seriousness of the situation, so we did believe it. Our Zaporozhets friend stayed home because of this seriousness. As it later appeared, there really was some reason to be afraid of, but we didn’t try getting too deep in, so all the consequences we had were the muddy shoes.
We gave a considerate effort into frightening our passengers (because we suspected there would have been a lot of mud-shovelling), so they were wonderfully equipped)). Almost everyone had enough warm and water-resistant clothes, which made all of us happy and satisfied in the end.
The driving and scratching wants but a beginning )) so we had a glance onto the two additional places nearby. 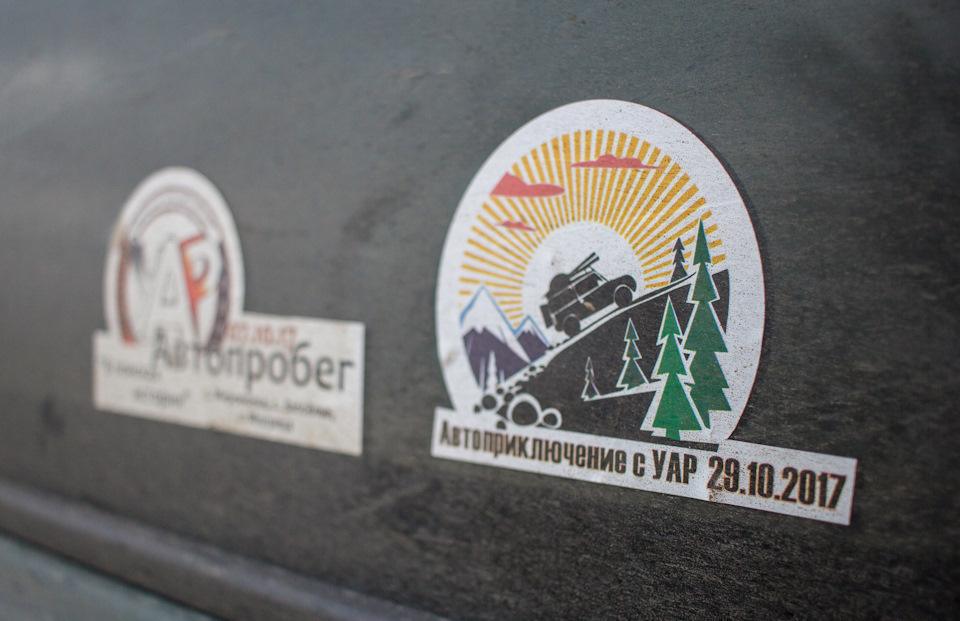 I decided to make the new sticker for every trip, just for the fun of it)

So, the morning, the packing, the loading… some time earlier we’d developed a habit of going to the nearest big gas station for coffee and snacks in order to prevent the chaotic and constant search of a good place for pit-stop later. It doesn’t always help, though… Nonetheless, this strategy still saves a good amount of time)) 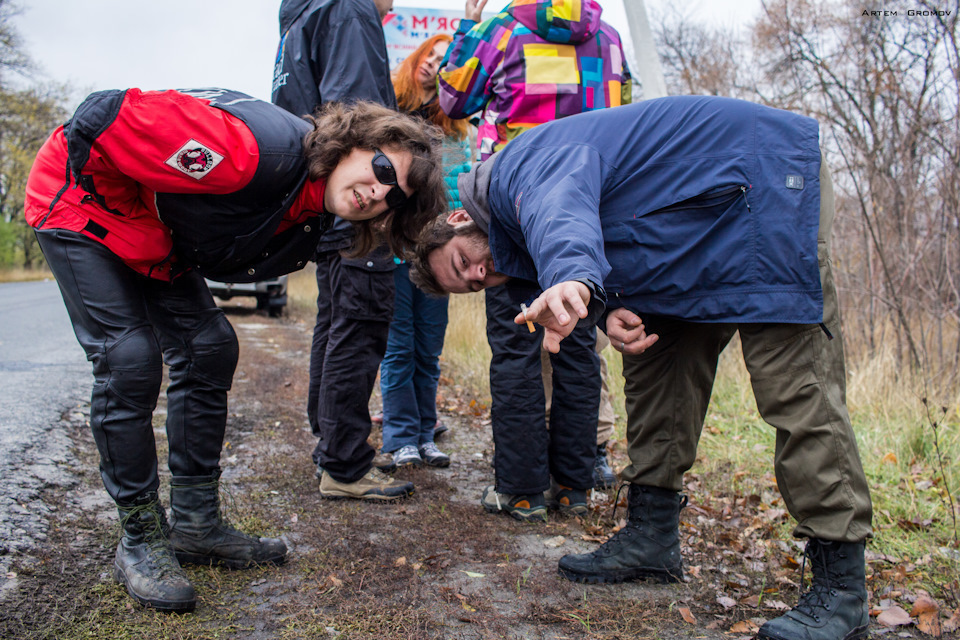 It’s necessary to mention that the Bohodukhiv highway is being repaired – there has been about 30% of the road replaced with nice and flat covering already (no sarcasm detected))). This is really splendid!
The first place to visit was the Ryabushky village (the names were rather peculiar this time))) There was John the Baptist Church of 1886. It was better preserved than many of the buildings we’ve seen. Alas, some of the bad examples of the “renovation” results spoiled the impression here, similarly to many other places…the plastic windows and other “solutions” certainly looked unsuitable. Yet another time to ask “What has this beauty done to you?” 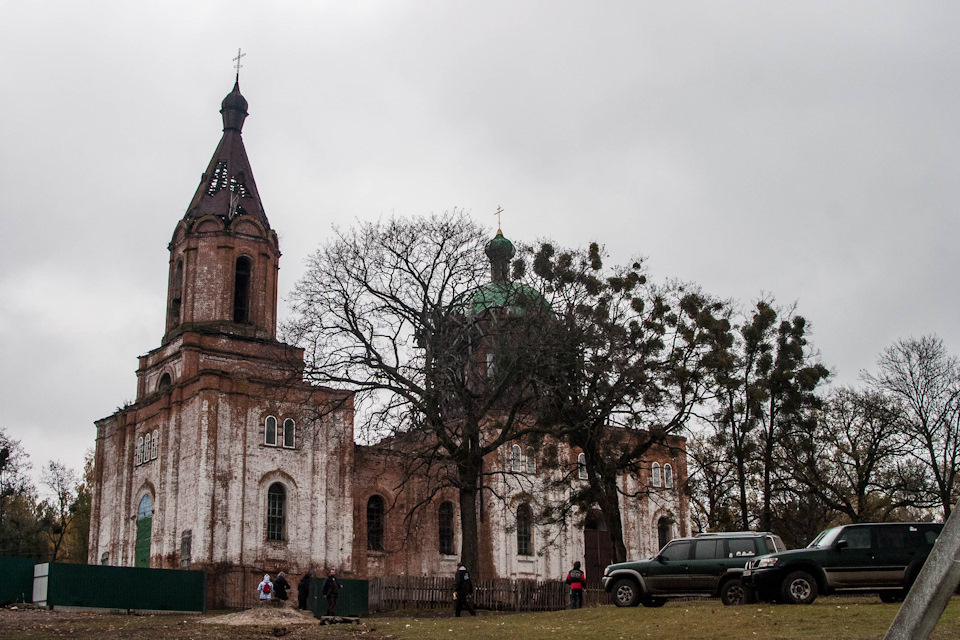 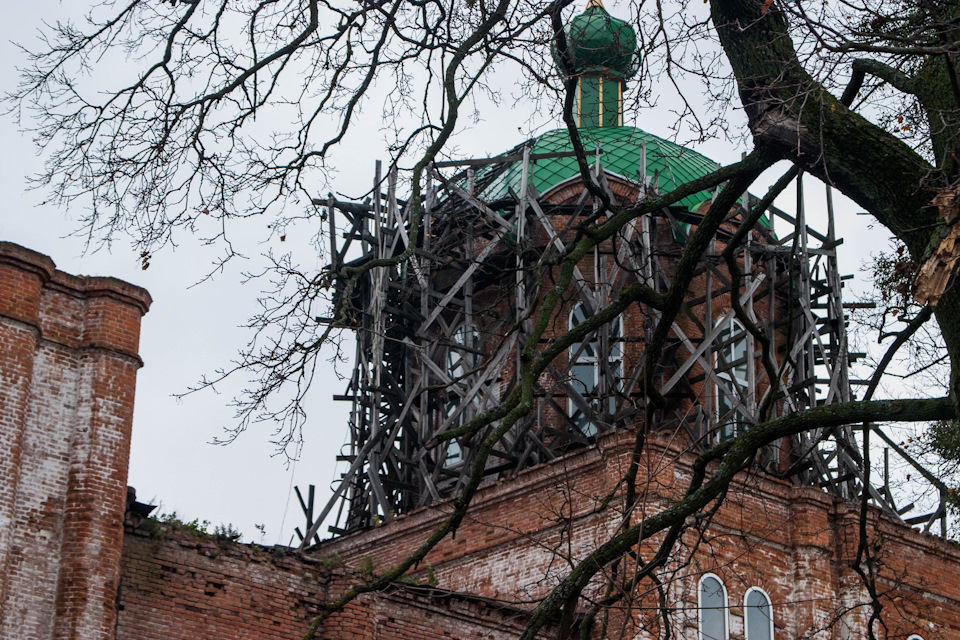 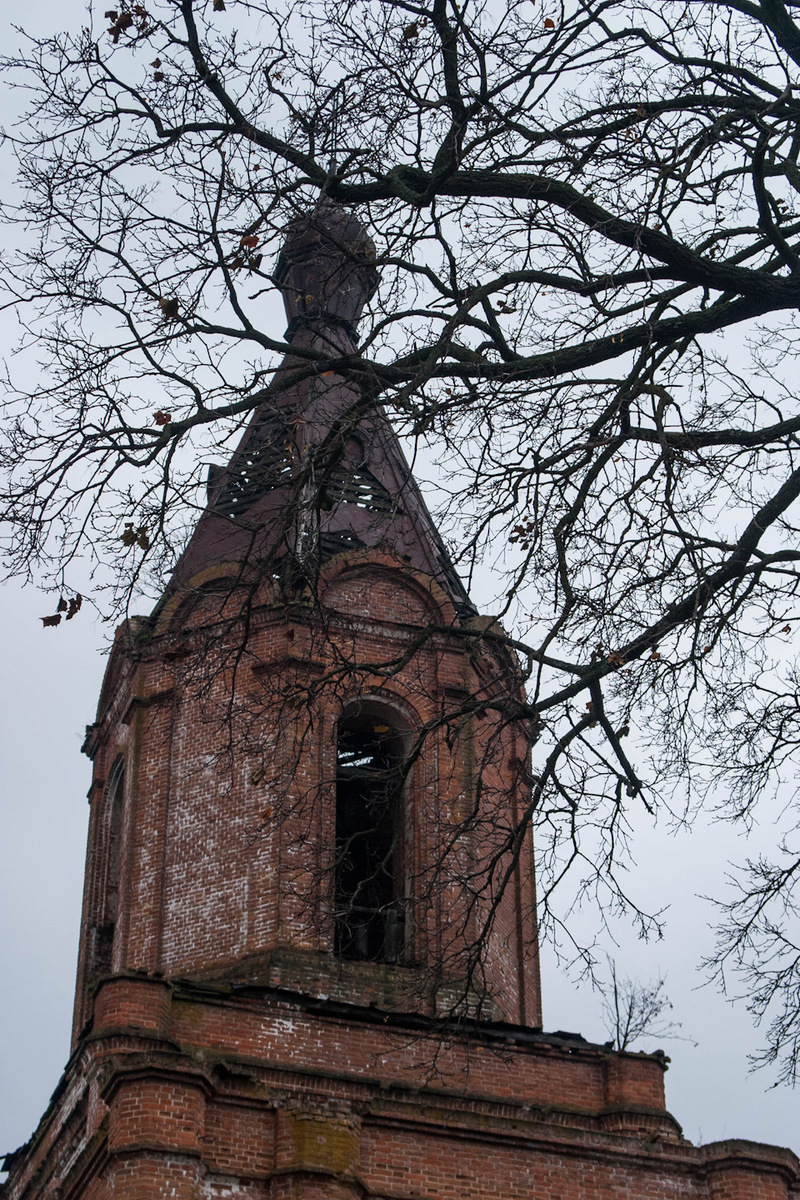 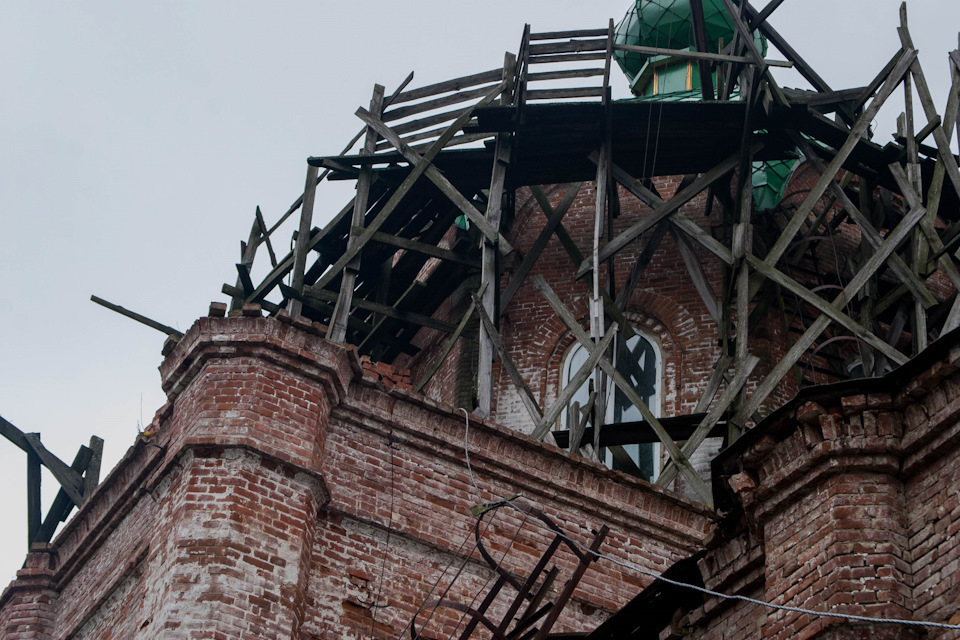 I hope that the church will remain at least a little bit authentic after the renovation.
There were some rams fighting near the church))) (Our gratitude for filming it goes to Tyoma:

The next part of our trip had been added the night before and it totally made our day. It would be hard to say what exactly impressed us so much. The church’s condition, or the locals’ attitude to it… or, maybe, the attitude of those who were supposedly meant to keep and take care of it. Perhaps it was the atmosphere of the place or everything altogether. But the fact was that we stayed under the big impression for a long time.
To be more particular, the St.Nicholas Church in the Bobrove village of Sumy region, built in 1730. It had been re-built in 1846 and is nowadays the oldest one in Slobozhanshchyna (Sloboda region) of Ukraine. 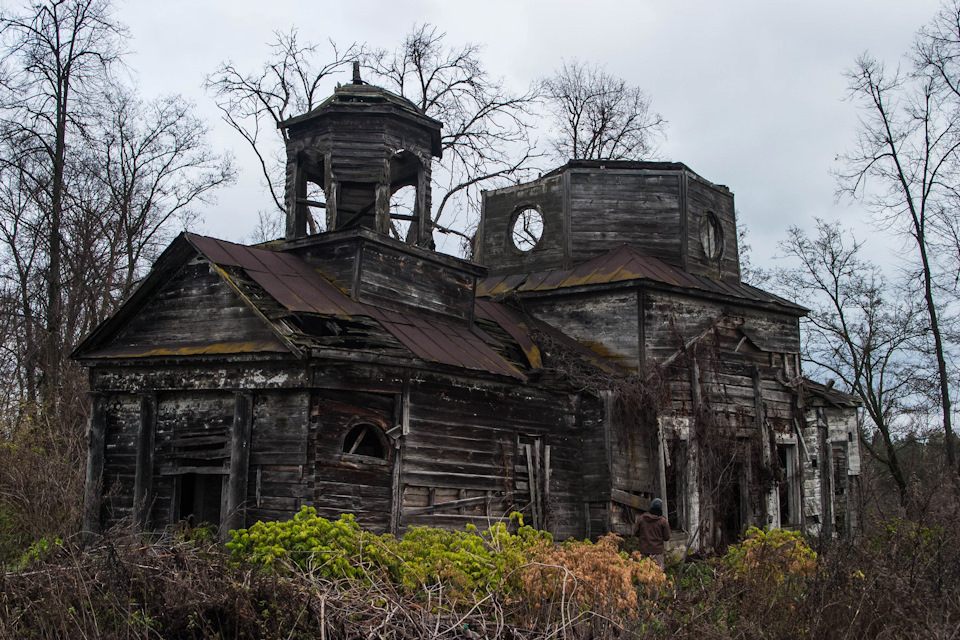 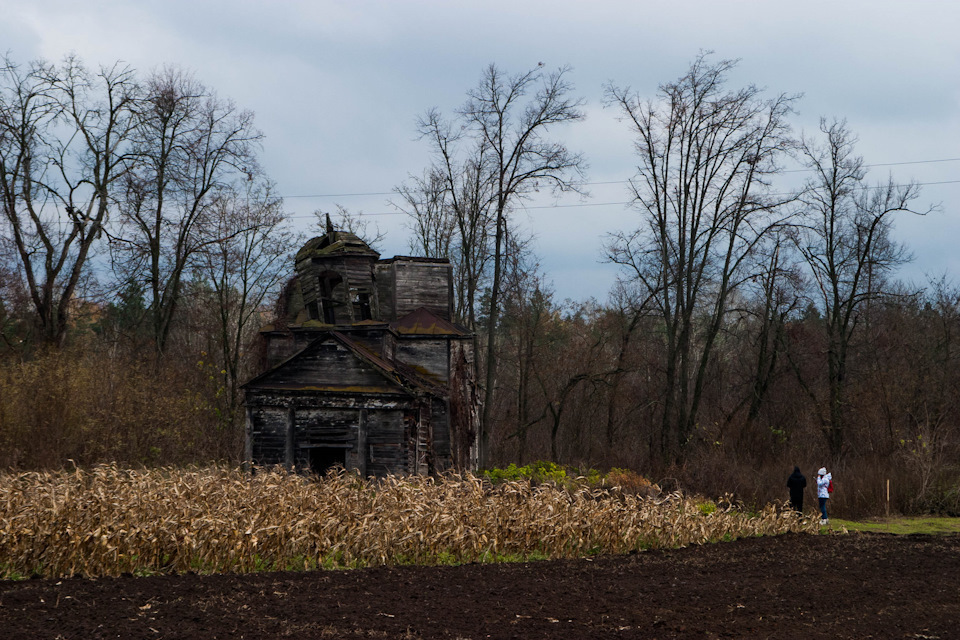 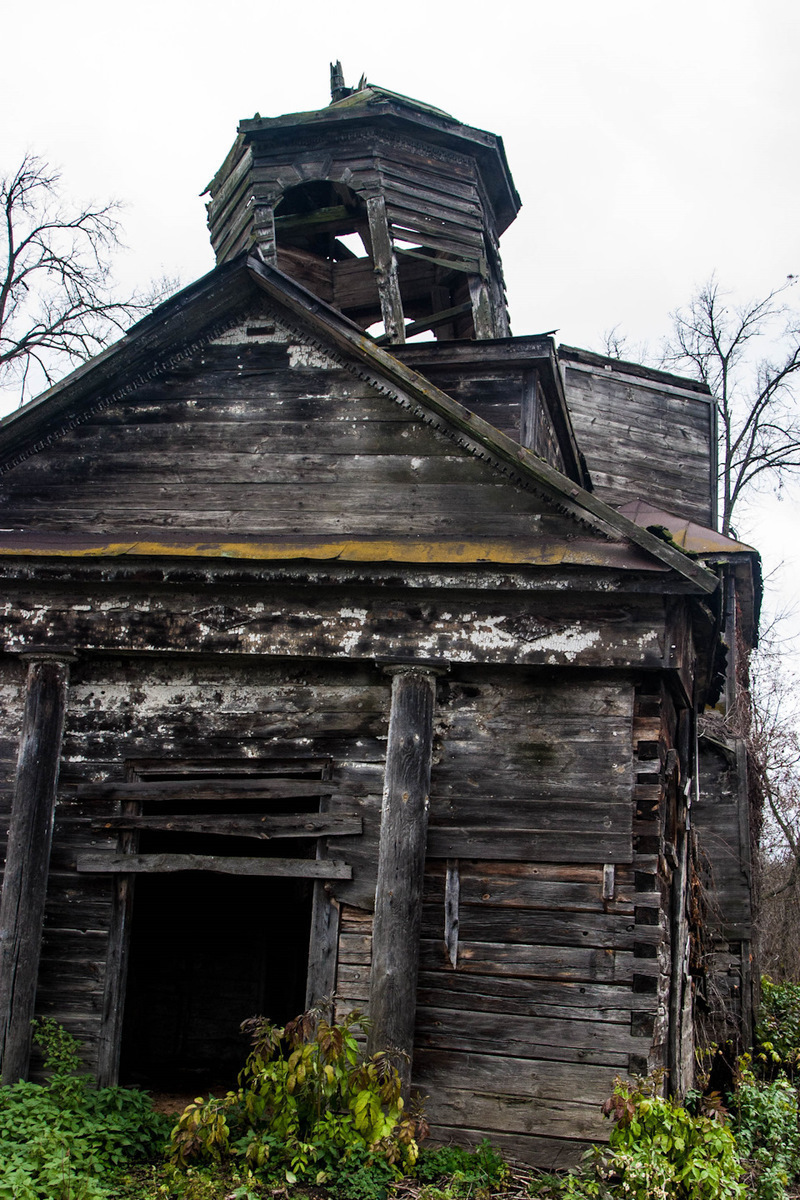 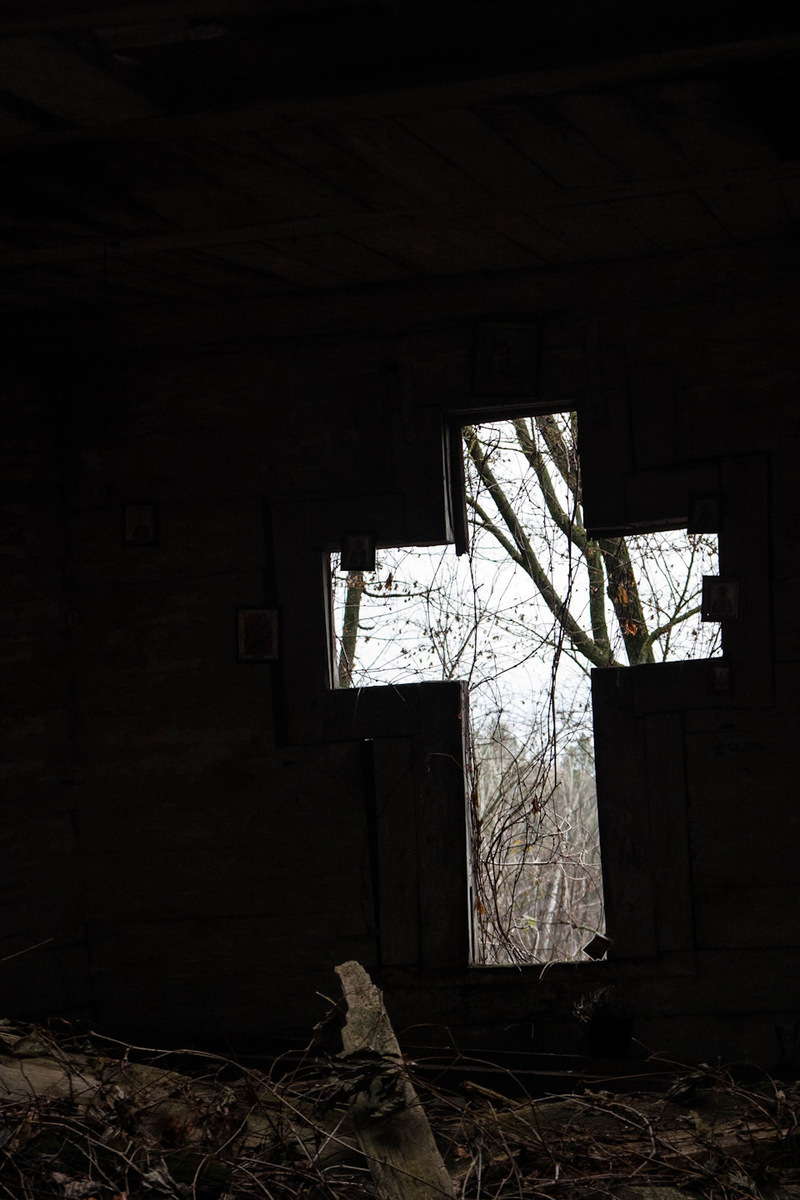 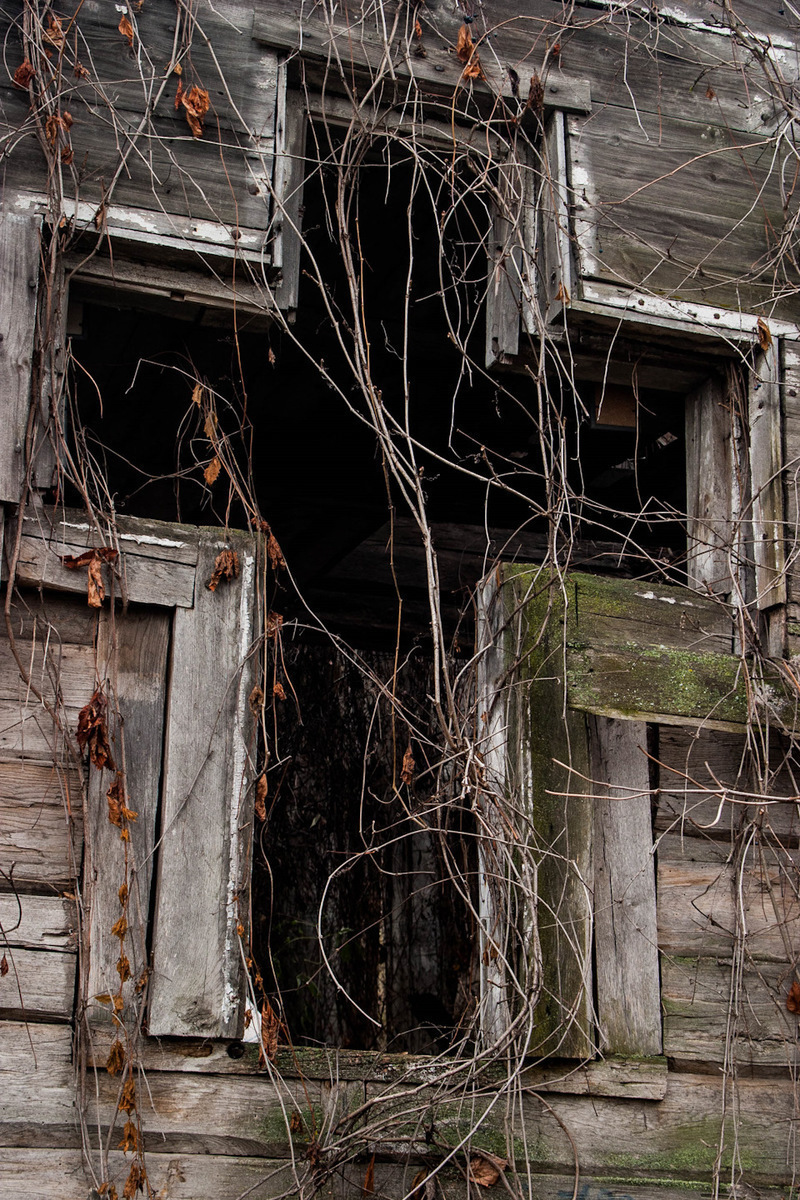 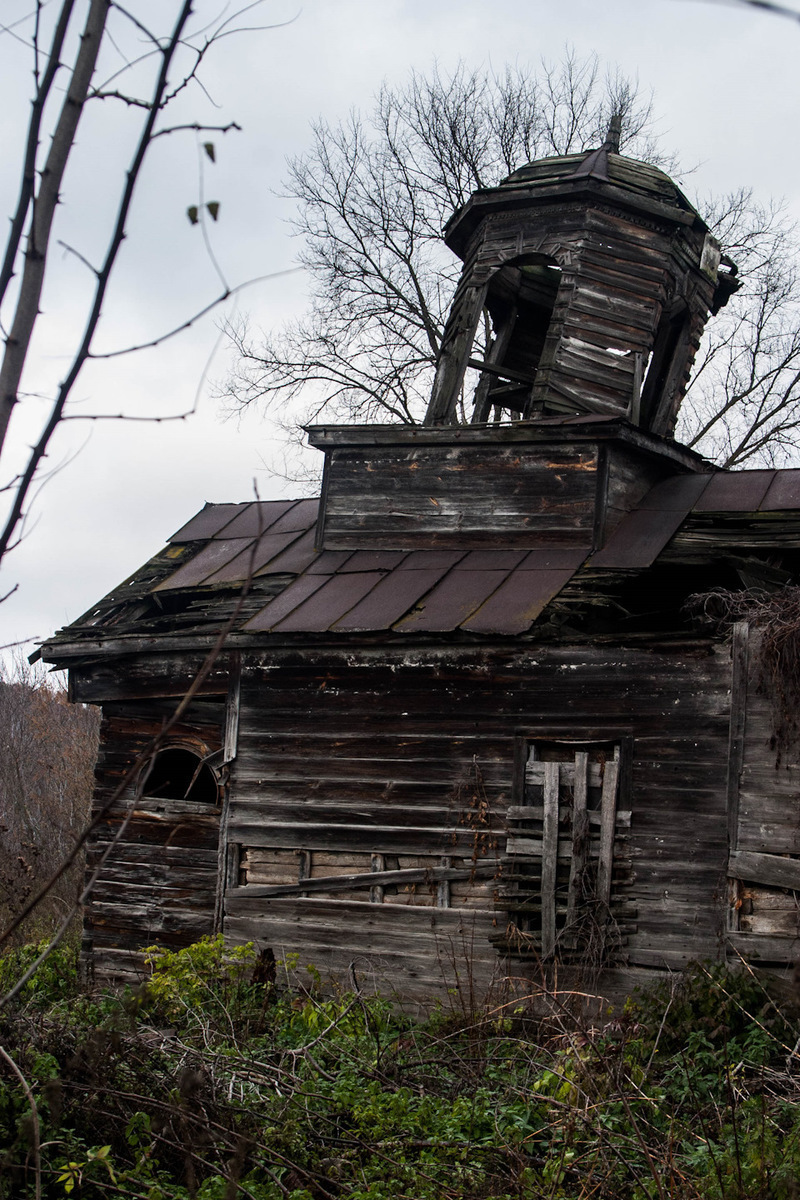 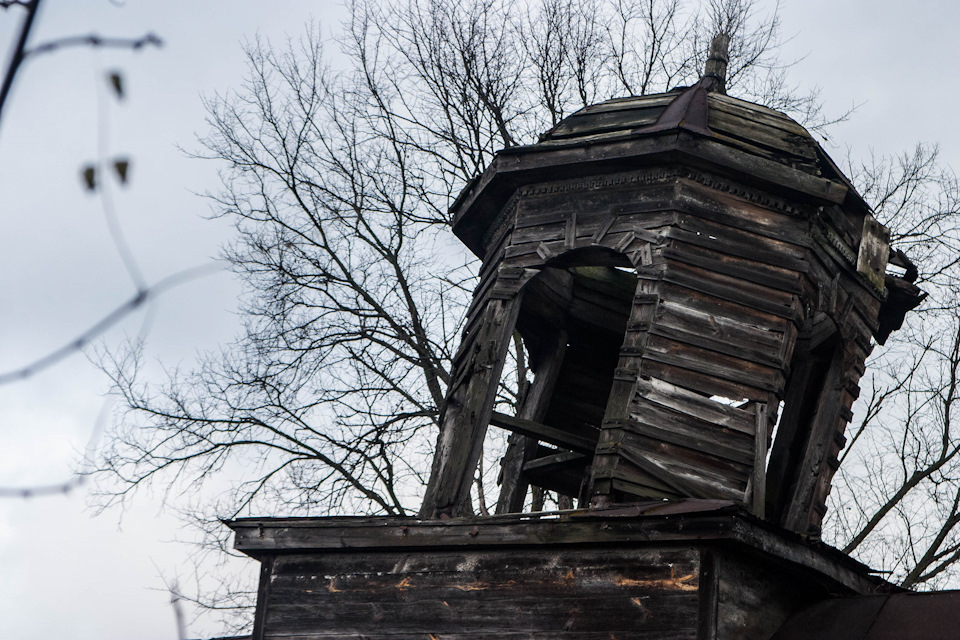 The eve before Halloween matched this place perfectly. Everything was taken apart inside – the locals had been looking for some treasures; the outside lacked coating – for it had become the fence for the turkeys across the road. The fact that the church hadn’t fallen apart completely gave a slight hope for the chance to save the building. But there was less than little faith in finding anyone who would actually start doing it. It was very sad to observe and realise this fact.
Usually, something happens to our war horses on the way. This time was not an exception… I wonder if there’s a way to change this tradition?)) 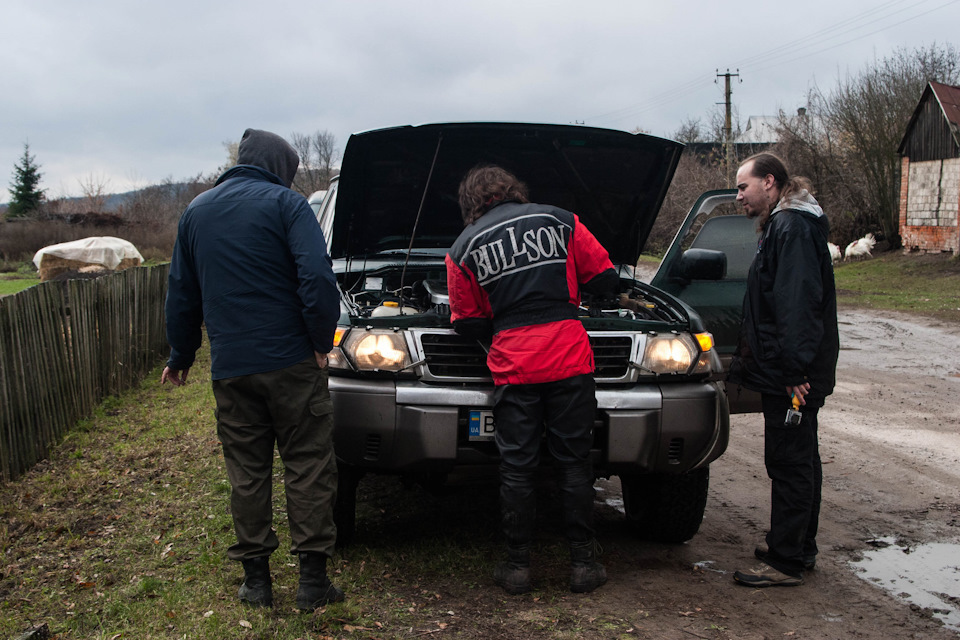 The anti-freeze has betrayed us and left)

Having been heavily impressed, we took off to the abandoned farmstead “Alyosha”.
Historical info: The “Alyosha” farmstead was known since the middle of the 19 century, when the Markovy landowners built a winery factory near a forest lake. There was a 10-person barrack for the workers on the hill near the factory. All the buildings were wooden with tiled roofs. The factory didn’t survive, but the barrack carcass and two broken ovens. People lived on the farmstead up to the 70s of the previous century, working in the forest (planting, growing and cutting wood). There was only one street with a dozen of houses on it. During the war, many families moved to “Alyosha” from Ovodivka which had been burnt by the Germans. Some of them returned back after the war, but some stayed to live in the middle of the forest.”

Nowadays the route to the farmstead goes through the fields. After the rains, the mud came up to the Patrols’ footsteps. And this was exactly what we’d been afraid of. But, as we found out, it was possible to drive next to the ‘road’, through the arrable. That is, the arrable was up to the hubs only and was suitable for driving. But it was over in the end of the field, and the route took a turn into the forest and downward, acquiring some red clayish color with a thick layer of wet fiery-orange leaves on it. Our team made a wise decision of not turning the trip into a trophy in the darkness. So after the field we simply walked the remaining kilometer to the farm.
The skills of skating and ice-skating came quite handy during this walk, since the shoes were immediately mud-covered up to the ankles with wet clay and leaves; and the hill angle served as a perfect sliding surface into a ravine. It was a perfect folklore game similar to ‘gorodki’ (a Russian game of pins knocked out by throwing a bat ~tr)! Whoever was not able to stand straight simply slided the natural clay-skates into the crowd with shouts and laughter. The rest of the people tried skating away from the shell flight trajectory. To our surprise, everybody managed to keep vertical in the end))) 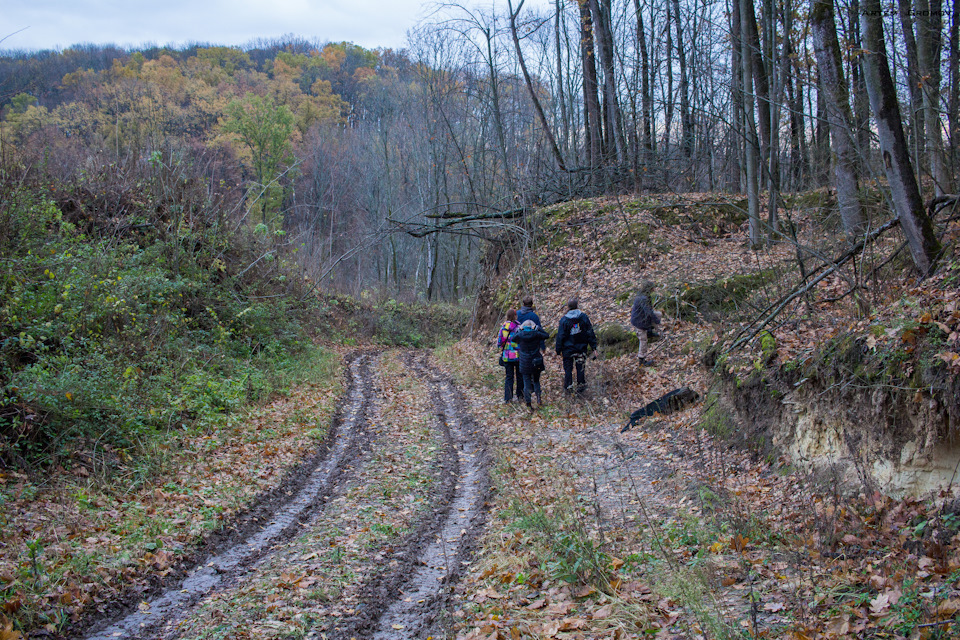 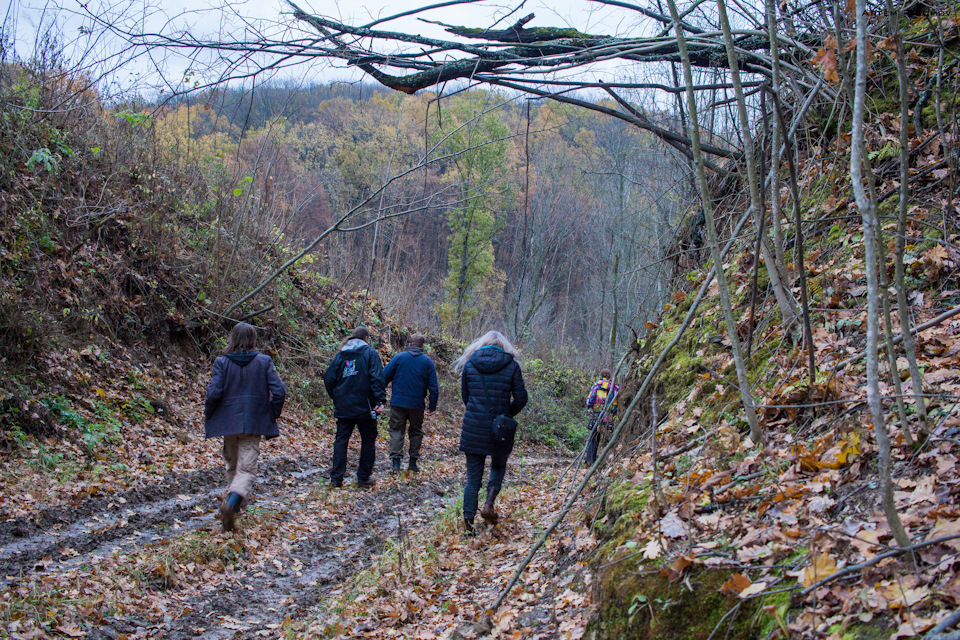 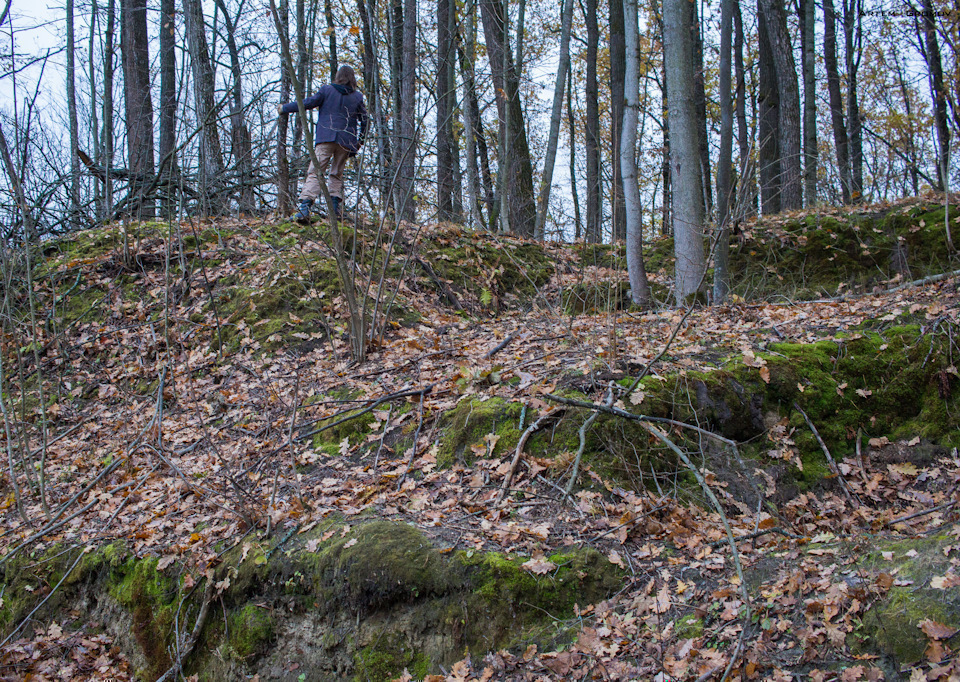 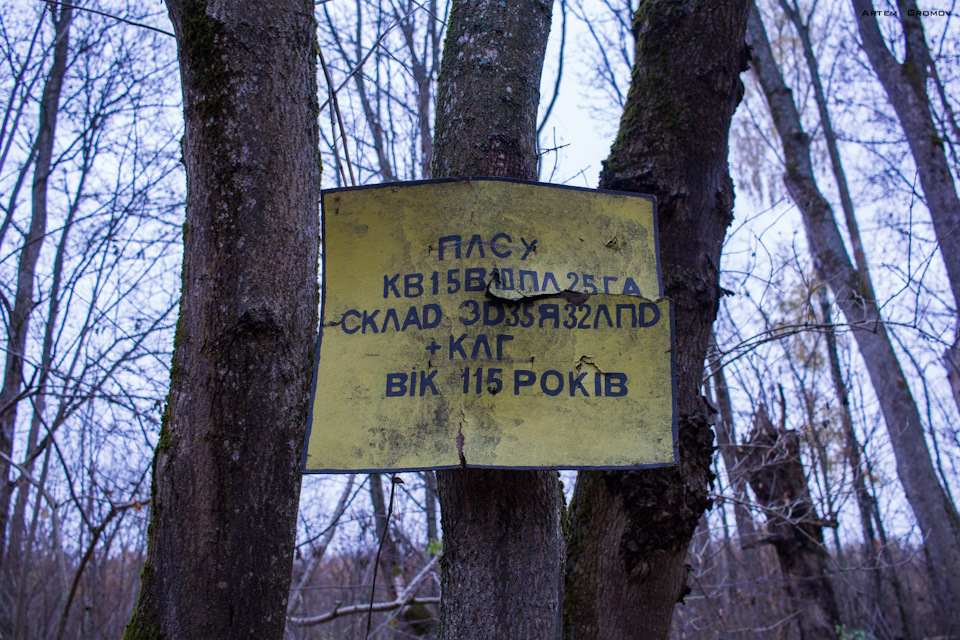 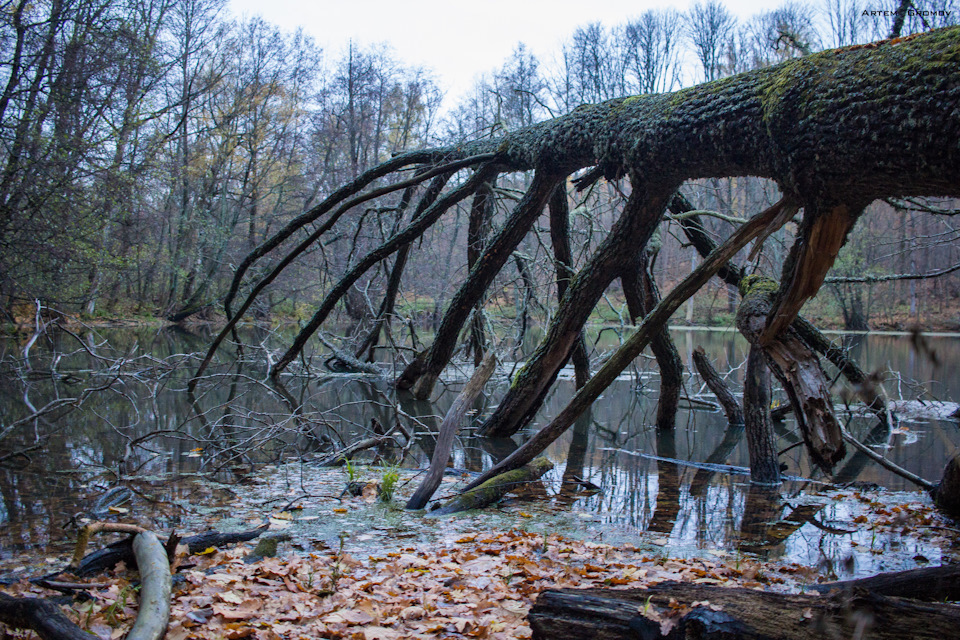 We went back through the hills in the forest, because going back up the slippery road did not seem very inspiring.
The dusk started falling and we sped up home.
Unexpectedly, it was only 6 o’clock). So we decided to have some snacks in a cafe near Akhtyrka. The kitchen was brilliant. The meal size was so big we could have ordered half a meal per person, and the prices were very nice, too!
Should there be any folks interested, the coordinates were: the “Tranzit” cafe , 50.31313, 34.9342.