Adventures in the south of Ukraine. Part three – salt marshes and shy birds.

We initially had three goals In Khorly. The first is a wild beach, which I remembered from my childhood. I remembered it as long one, with high banks, red sand and very beautiful shells. The second goal is an oyster farm. And the third is a bird island, which can be reached either on foot, waist-deep in water, or with fishermen on a boat.

Our next stop was planned on the island of Dzharylgach, and we still had to reach it and see other planned places. And we spent several days on the repair. Therefore, the beauty of Khorly was decided to be left for next time.
So, we had breakfast, packed up and went on. 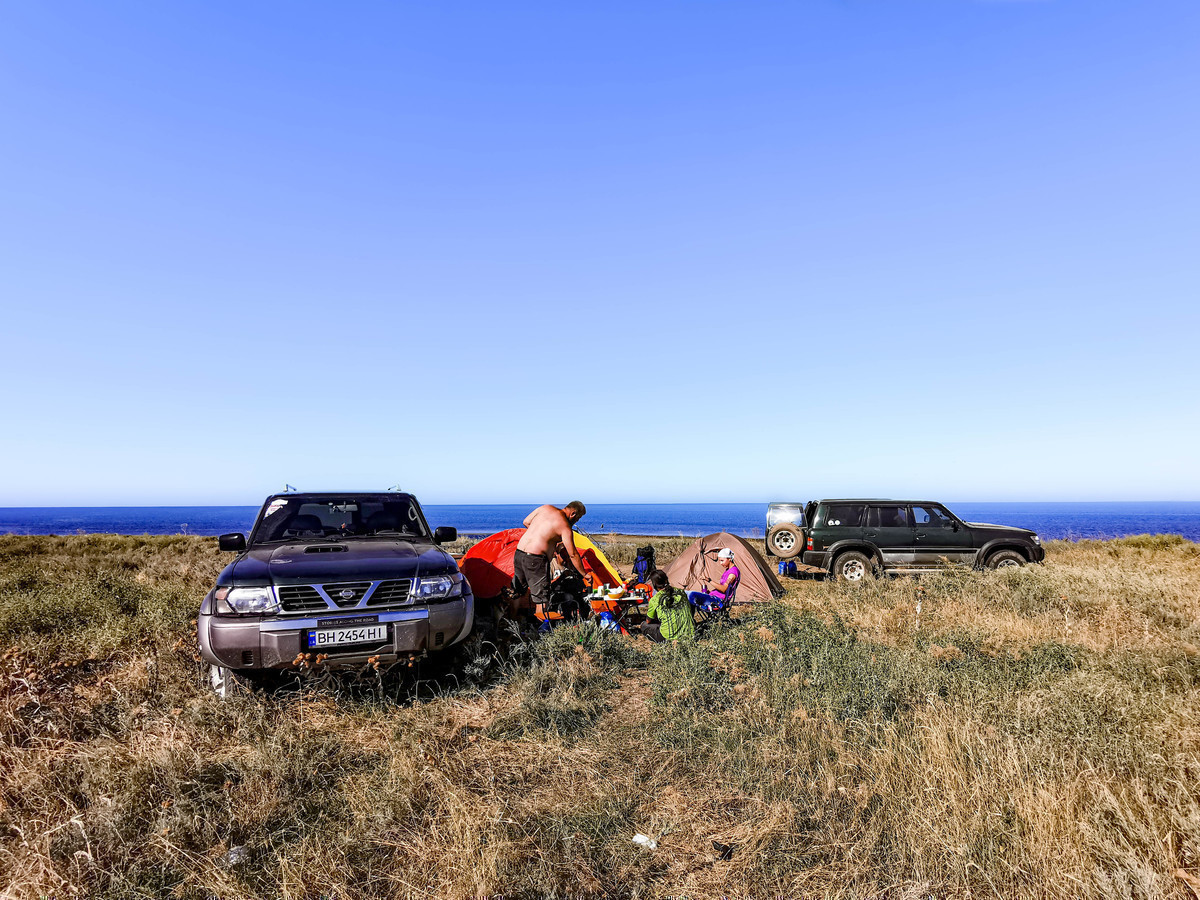 This is what the wild shore of Khorly looks like – hard grass, thorns and nothing around as much as three – four hundred meters… And then the fences.

First, we went to try to shoot two ponds, which on the satellite map looked very interesting. But. The isthmus between the ponds turned out to be dug. Moreover, very thoroughly – the channel turned out to be about 10 meters wide and deep. You can’t pass with all your desire. Well and not surprisingly – this place is also not far from the border zone. But there are a huge number of birds. Unfortunately, they did not begin to communicate with us – they all moved away from the coast (( 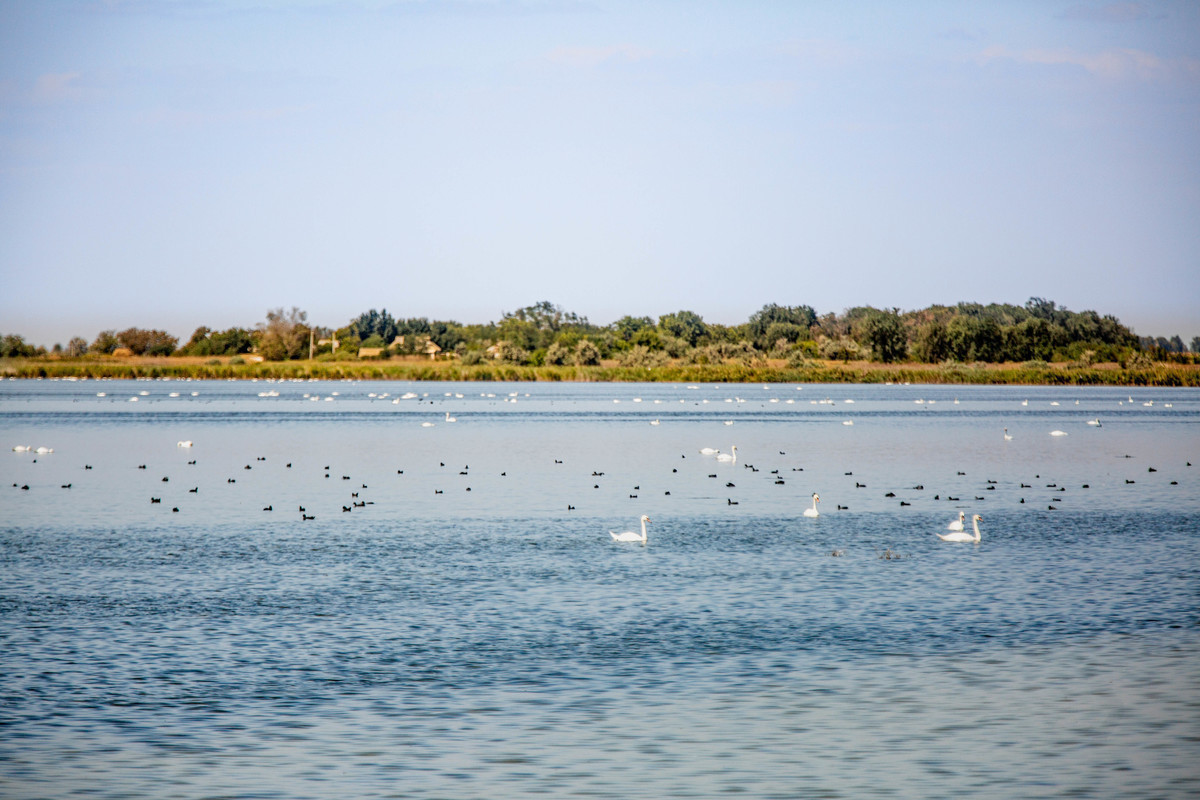 Then we tried to drive on one cape, using the google navigator. It’s good that we had to go around not far. In general, Google has some problems with such wild places. There is a road. Rather, it was. But we ran into a swamp. And all would be fine, but we have a trailer on small thin wheels, which will deepen as soon as possible. After weighing all the pros and cons, we lifted the drone and looked in the vicinity for another way to our point. And we’ve found it)) How convenient it is – reconnaissance from the air!

The salt marshes around are almost dry. But not everywhere))

At the very edge of the cape there was a huge number of different birds, but they are very shy. I walked towards them from afar, but for two or three hundred meters they decided not to wait for me. 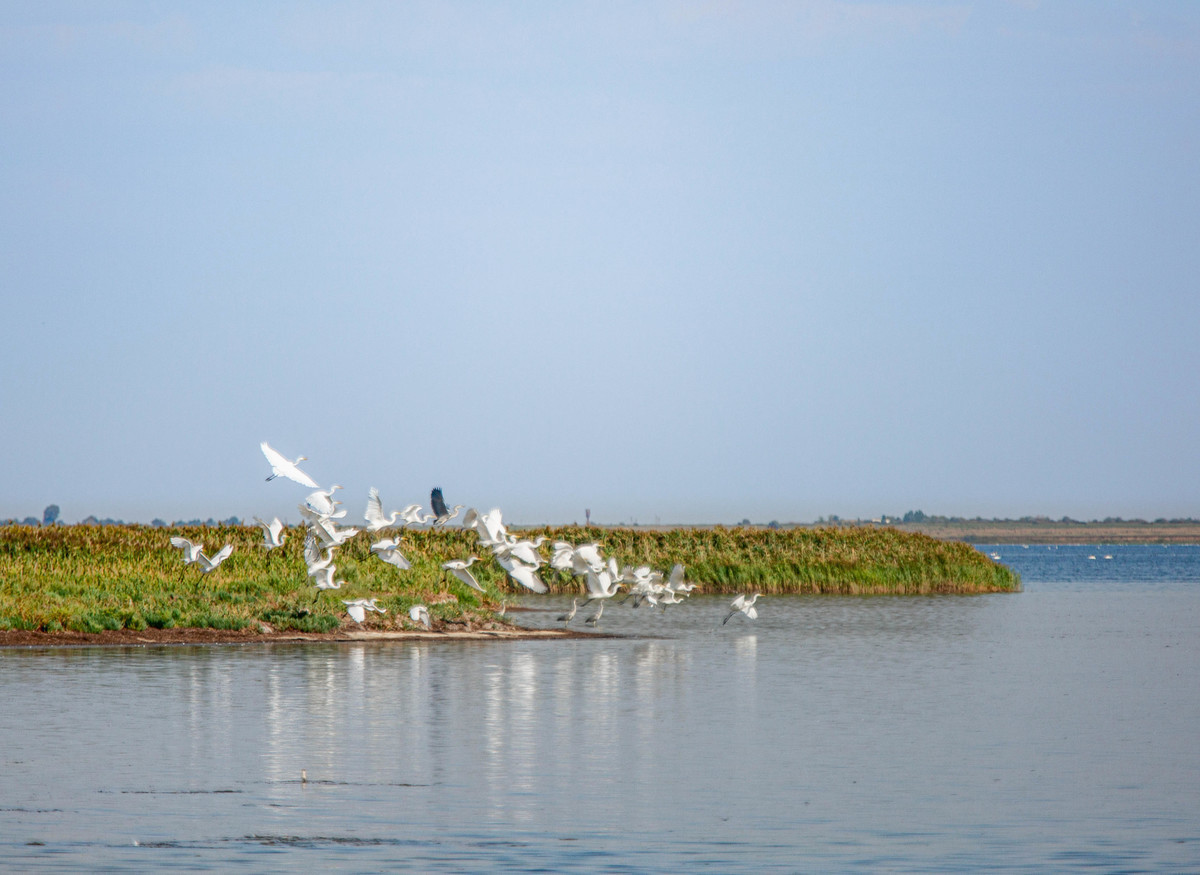 Very beautiful places! But getting there is not very simple)) We got a lot of pleasure from them!
Further along the program are two more capes. The first turned out to be easily accessible – we simply traveled around the field and went down the hill. 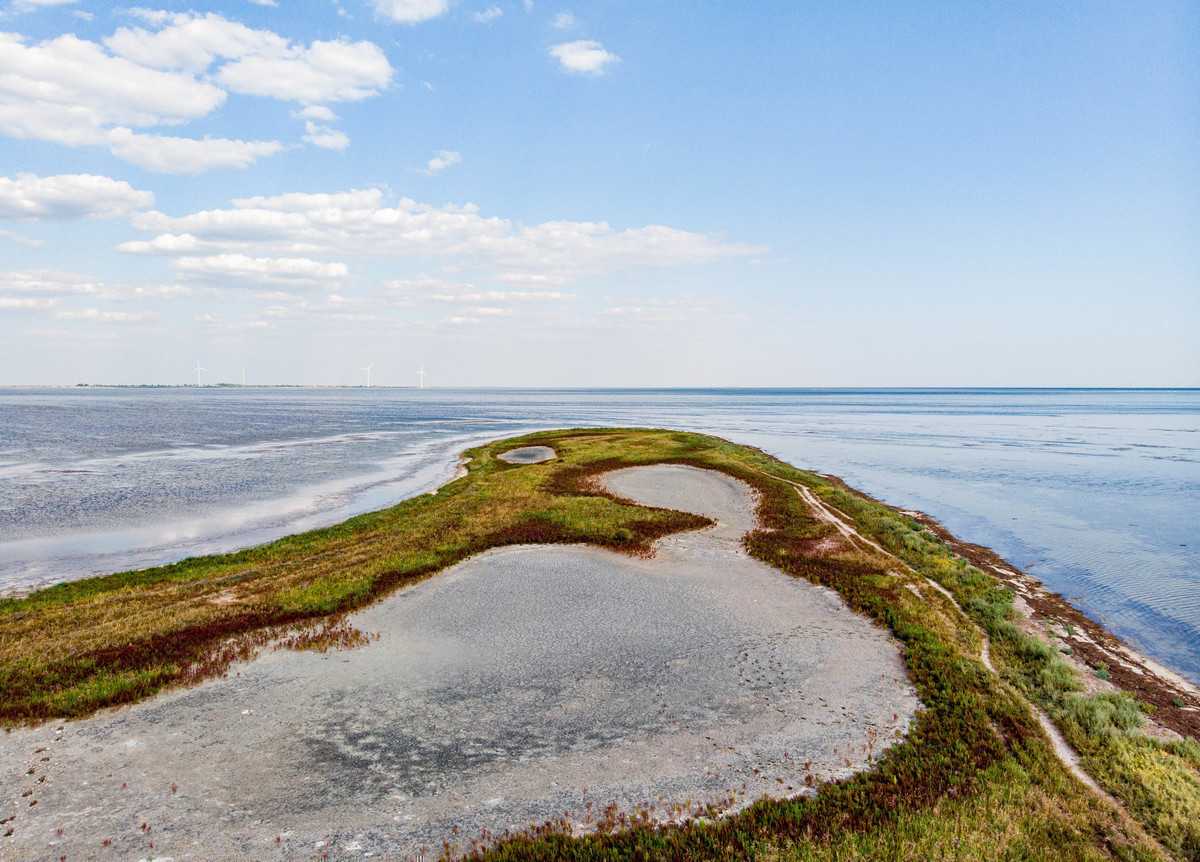 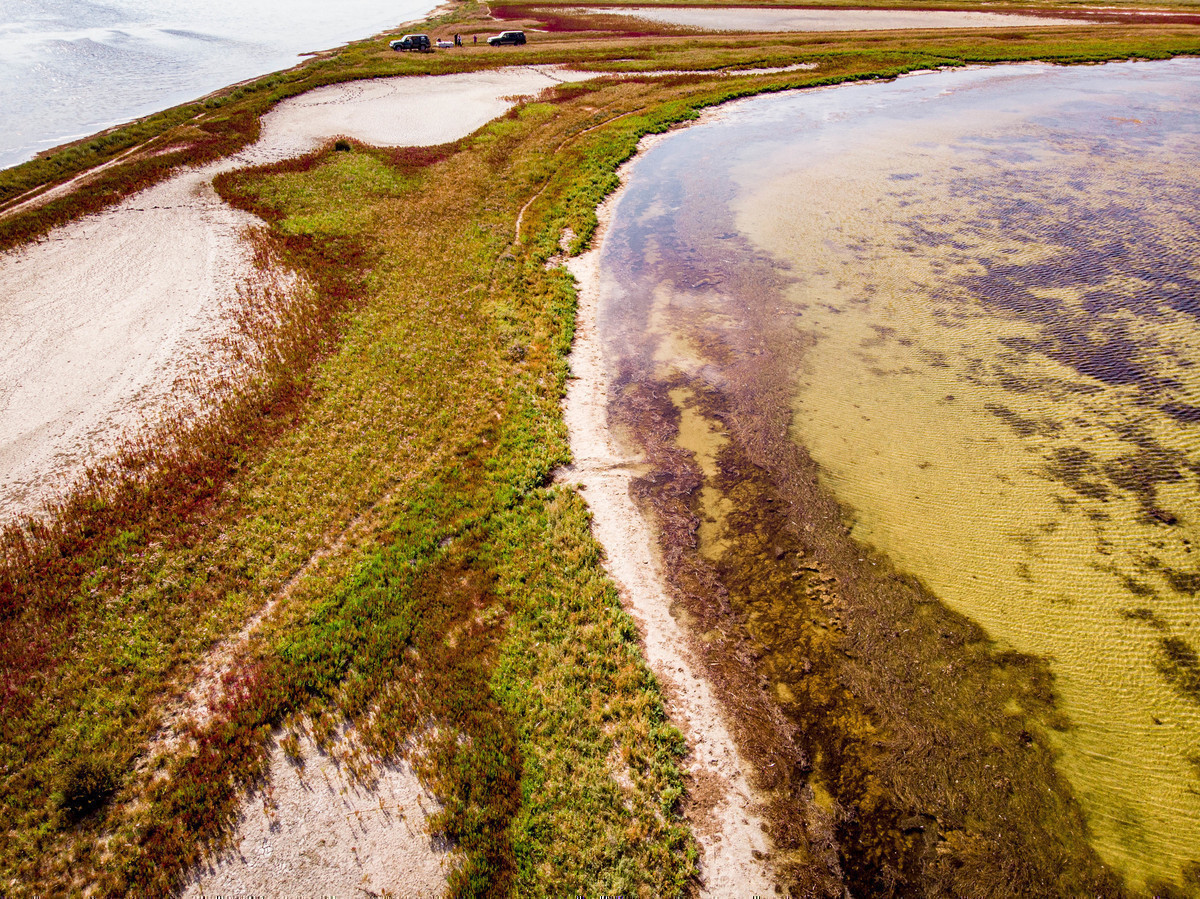 It seems to me that we chose the right time for a trip to the salt marshes)) If it were the beginning of summer, when it still rains and the earth did not dry under the hot sun, then this would be risky))
Beauty! 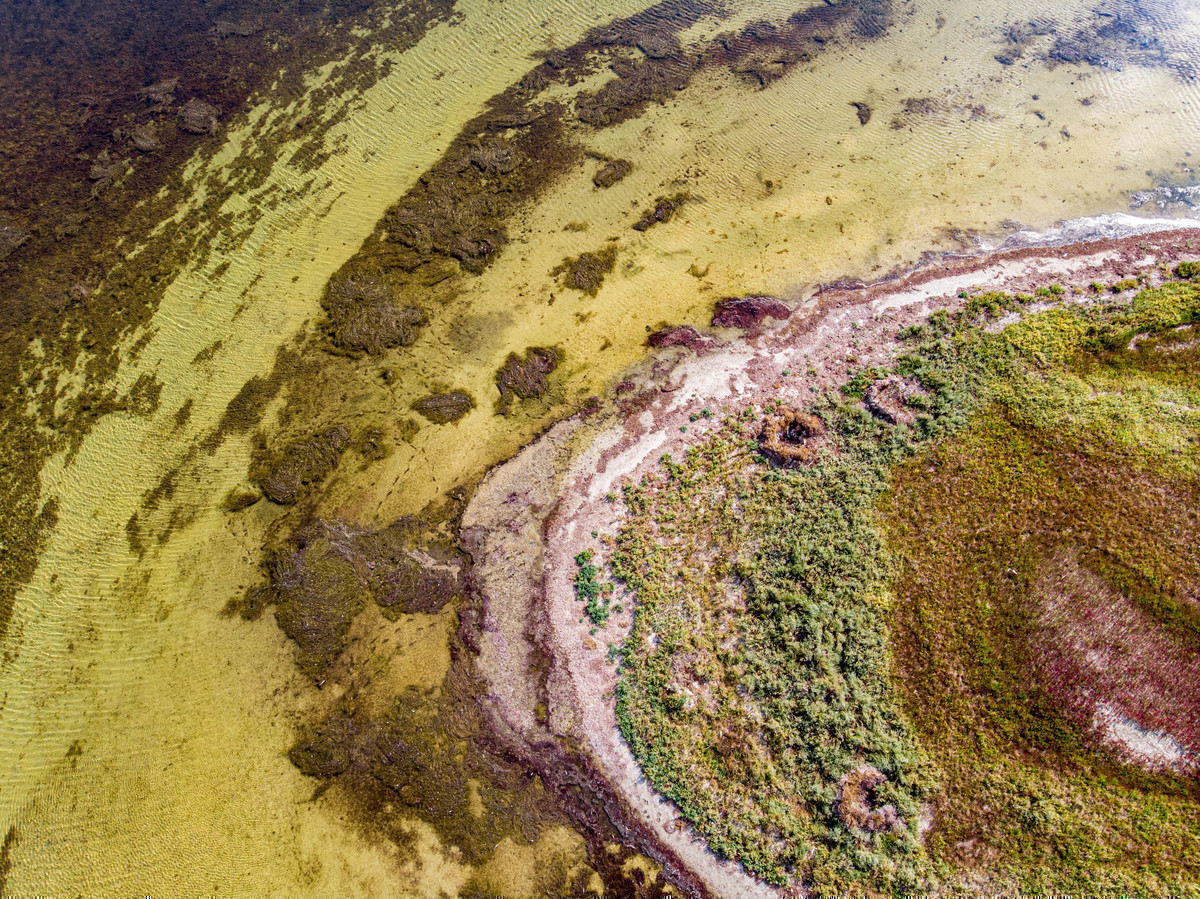 In theory, we also had a neighboring cape in our plans. But it was clearly visible from this one. Well, and the military unit on it. Therefore, once again, no shooting from the air, no photos. We didn’t even go there. But we drove further along the navigator and again buried in the swamp. Only much bigger than the previous. Turned around and drove a little back. Well made a hook – well, this happens to everyone))

Initially, the plans were to leave the car in the parking lot and go to Dzharylgach for a couple of days. But due to our delays, there is no time left for this. And we did not want to go to the island in the evening with all things, spending day is there, and to leave the island the next morning. We decided that we would come here purposefully and stop on the island thoroughly. Therefore, we found the closest to Skadovsk campsite and moved there for night. 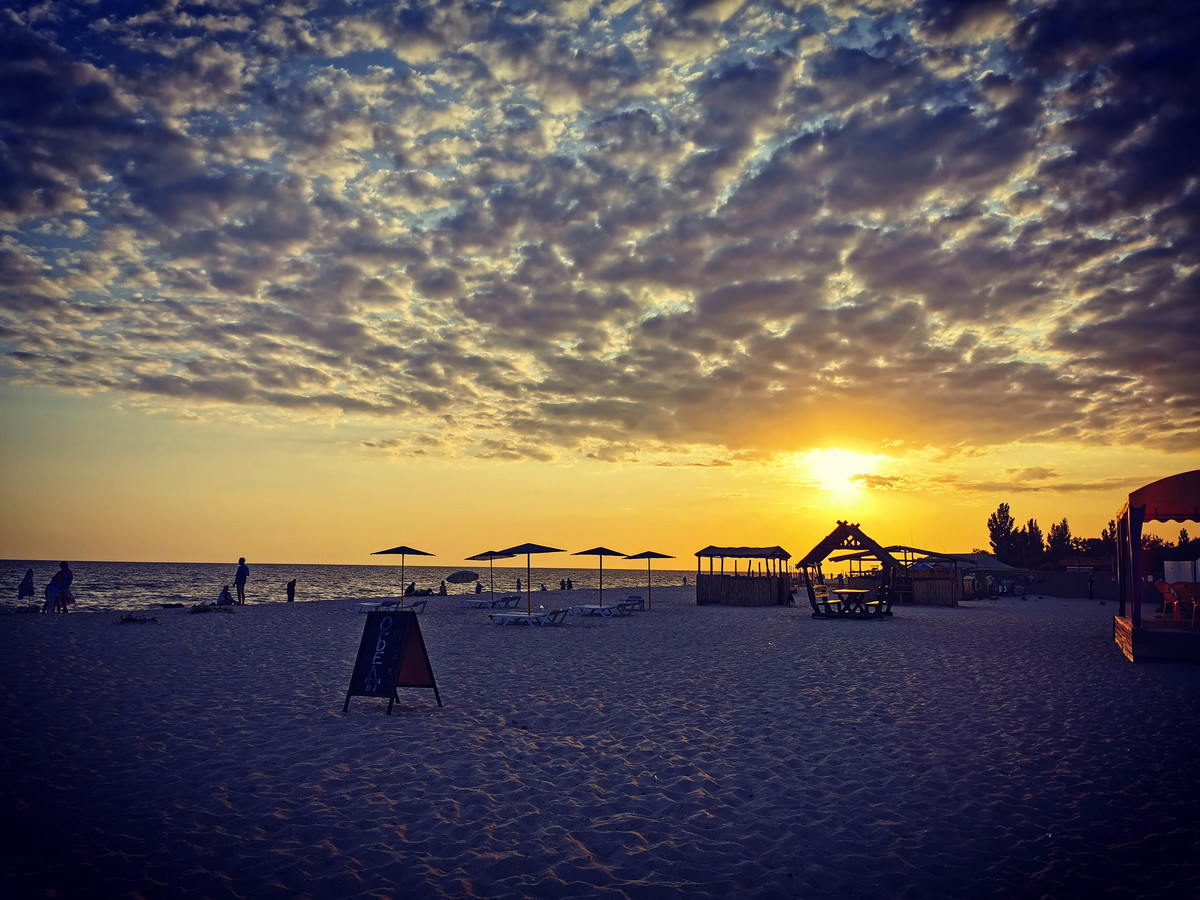 As it turned out, finding a campsite in the vicinity of Skadovsk is another quest. At first, good people from the pier in Skadovsk advised us to stop right next to them “on the beach”. The beach turned out to be a strip of sand ten meters long, completely overgrown with reeds and waste from ill-mannered people (a lot of glasses, bottles and other tourist joys). Well, the cherry on the cake – mosquitoes!
Naturally, we refused this wonderful offer. The closest was Camping “Chaika” in Lazurnoe.

Thanks, of course, for letting us in – that’s what it’s called. The cost is rather big, the toilet is paid during the day… Further along the beach there is free, but the fact itself .. We could not persuade the owners to open the shower on the first day. But there is a small café on the beach where we gladly ate. If there would be a choice, most likely we would be looking for something else. Oh yeah! And a children’s summer camp in the neighborhood. And they watched a movie clearly on the street on the big screen. And all around until night listening to him. One way or another, but we charged everything that we didn’t manage to charge on the road and ate well.

In the evening we saw an announcement of sea-walks to the Dzharylgach directly from Azurnoe. “This is great!” We decided and called to find out what and how. The price turned out to be quite pleasant, but some words on that end were alarming. We decided not to risk and go to Skadovsk to the well-know pier and to the well-know captain. And we turned out to be right, as it turned out later)) But it was not without adventures also))

So, morning, we are packing and going to Skadovsk to the agreed time. 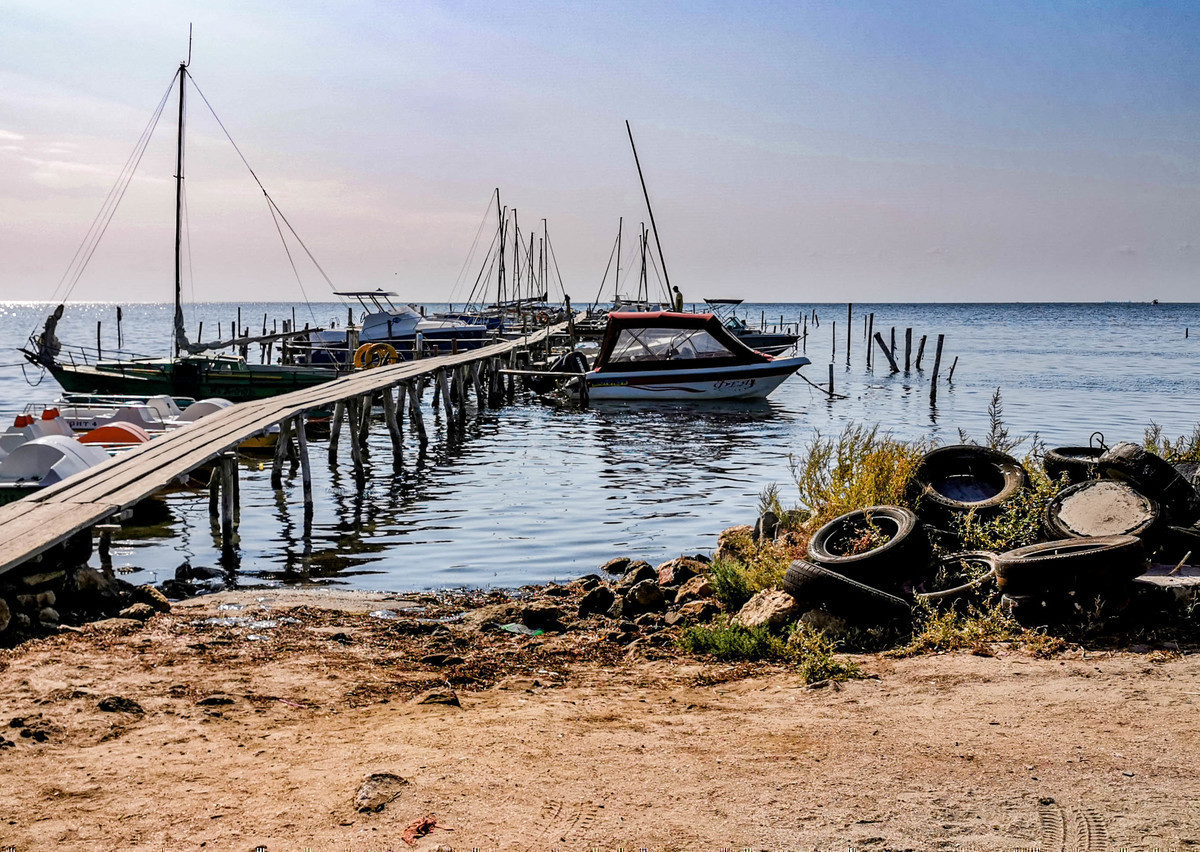 When we arrived, it turned out that our captain had already left… Like that. He left us with his friend. To begin with, we went to the city marina, where four more bodies landed aboard. The bodies were with beer and already in a frenzy, they were put in the most delicious places. That’s the fun already. While we were on the way, the captain constantly moved us to different places, so that the weight distribution of the little boat corresponded to the situation, and the bodies poured beer, giggled and stinked with fumes. 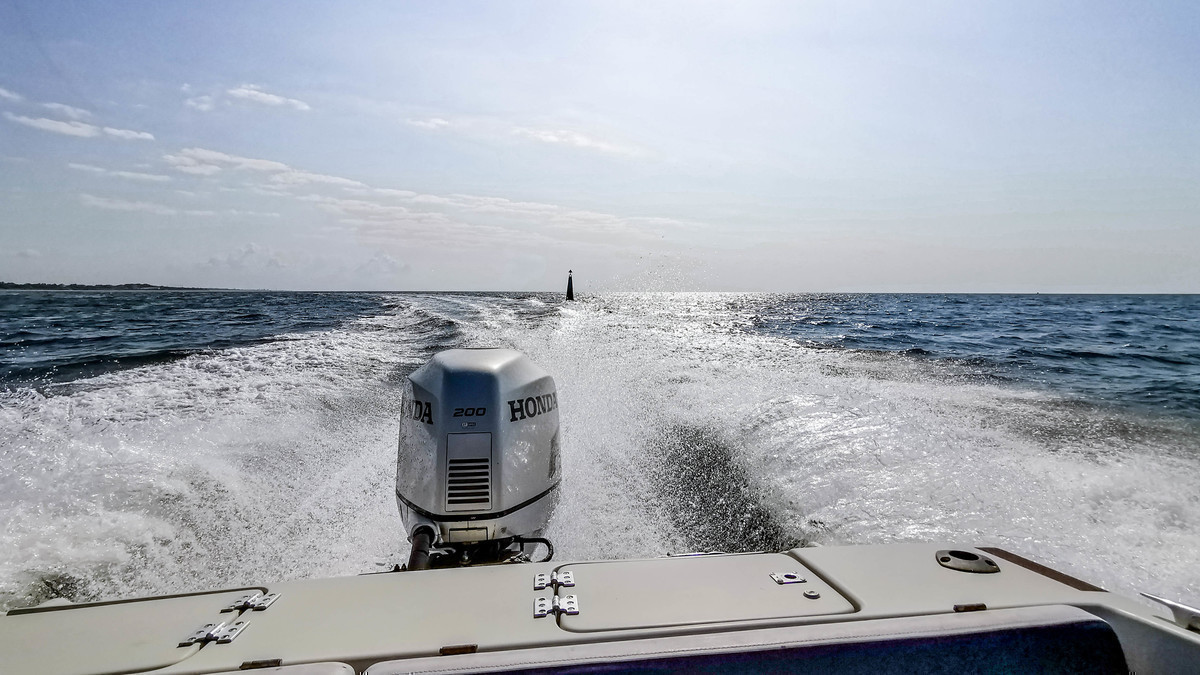 At some point, we began to suspect that we were somehow reaching the “Glubokaya” Bay for a very long time. And our fears were confirmed when we approached the “Lighthouse”. When asked to the captain “what the hell?” It turned out that they misunderstood something. One way or another, but we got to the Lighthouse and decided to see what was here and how, since we got her. ..

Unfortunately, this place was turned into a pigsty. Due to the fact that the road from the bay to the open sea is very short in this place of the island, it turned out to be very convenient to place “bars” and toilets between the pier and the beach. Actually, this is the whole distance and, apparently, needs… The people arrive, unload, on the way to the beach they are loaded to the point of unconsciousness and starting making seals of them, scattering traces of their stay around them.
If you go straight from the pier through all this joy, and turn right on the beach, then the very same lighthouse, because of which this place has become famous, can be found very close. 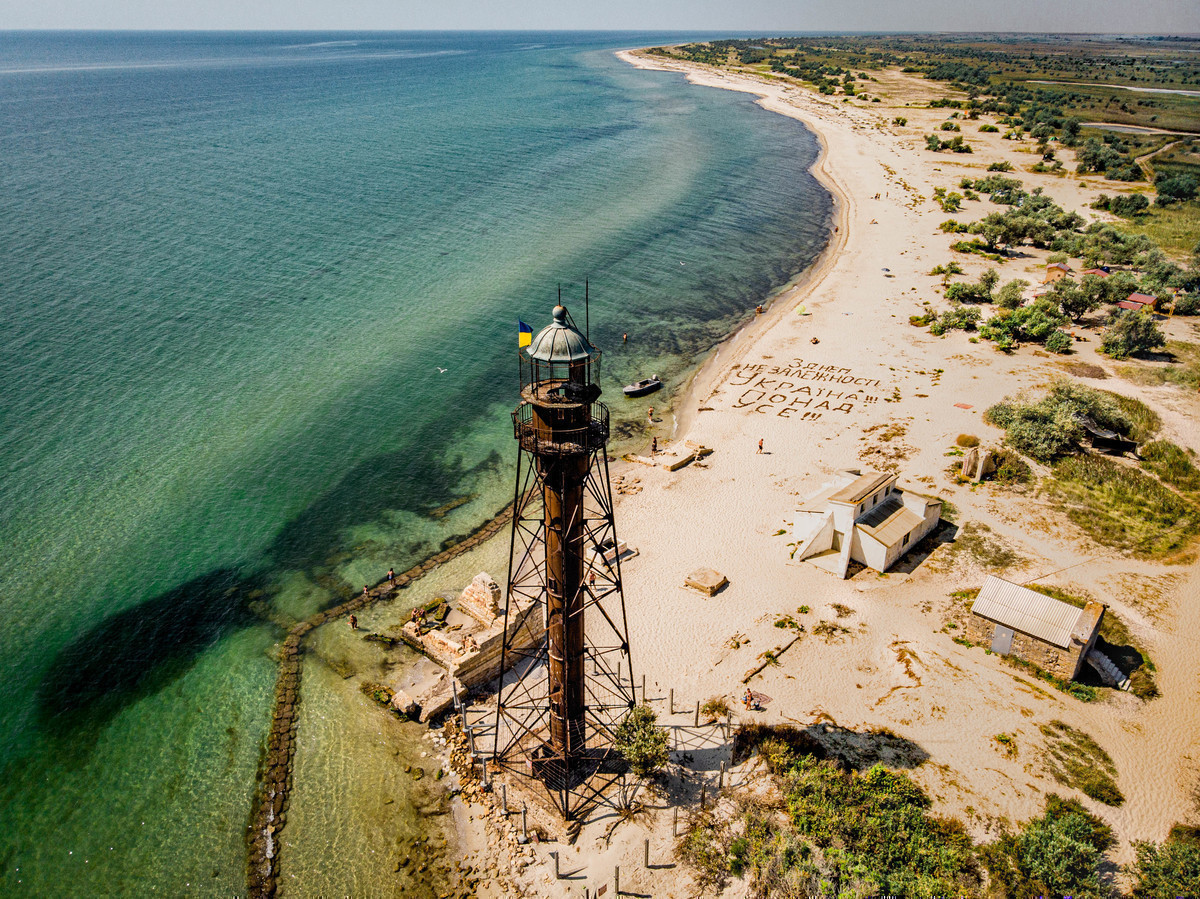 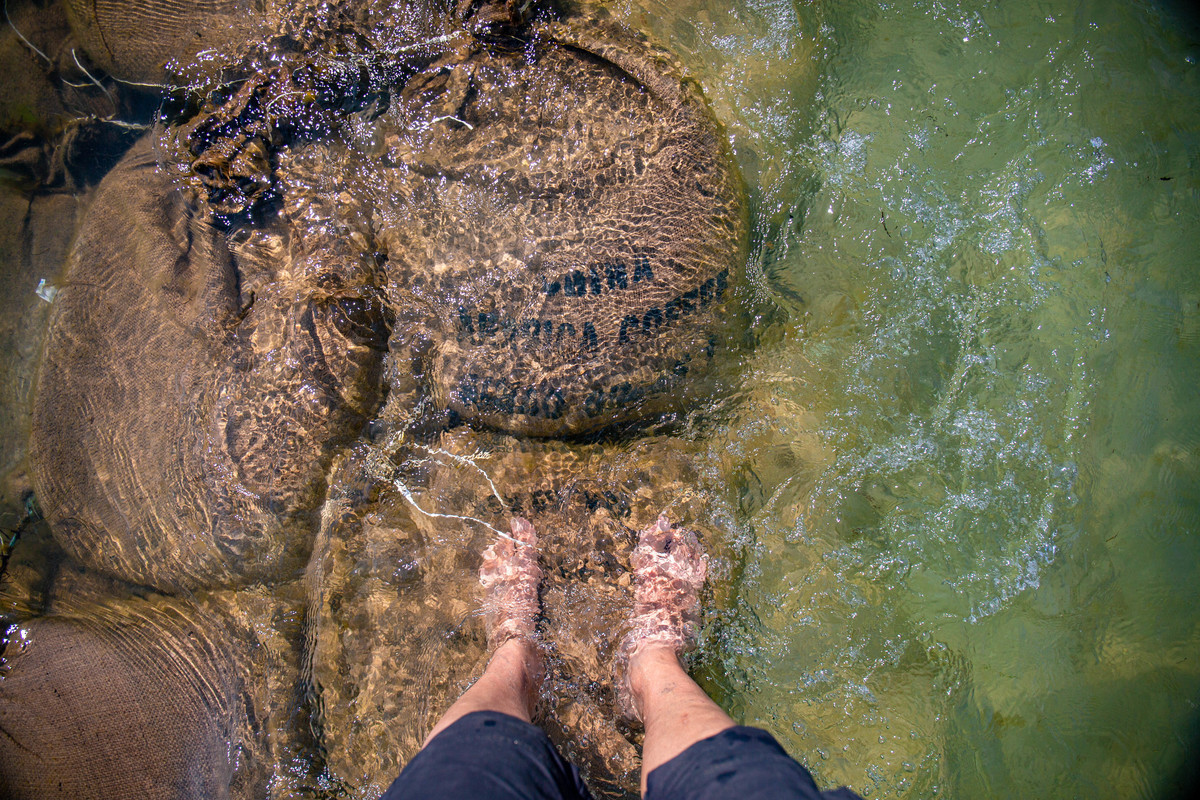 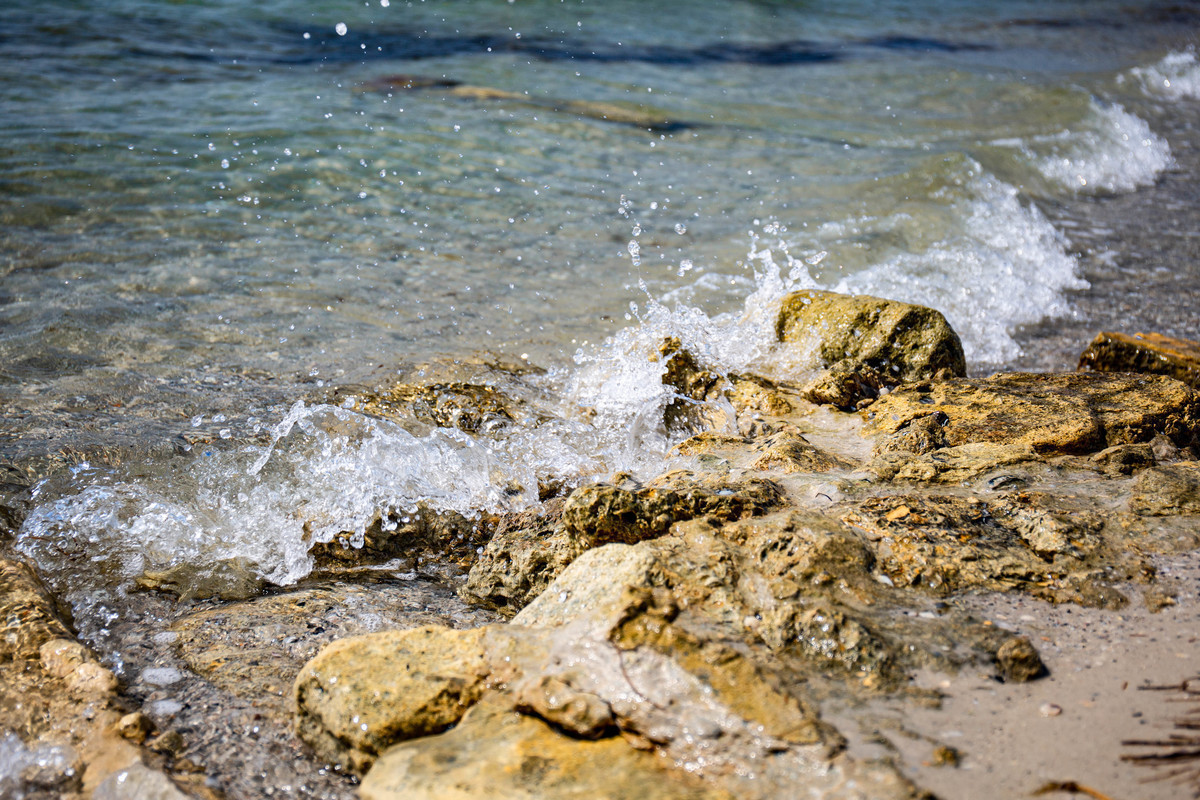 This is what the result of nature’s work looks like – the remains of lighthouse buildings.

The lighthouse itself is fenced with barbed wire – it is in disrepair and it’s dangerous to get close to it.

Our friend Willy was very tired on the way to the island – he was on a boat for the first time and this was clearly not a joy to him. In the meantime, as we examined the lighthouse, he was completely bored: 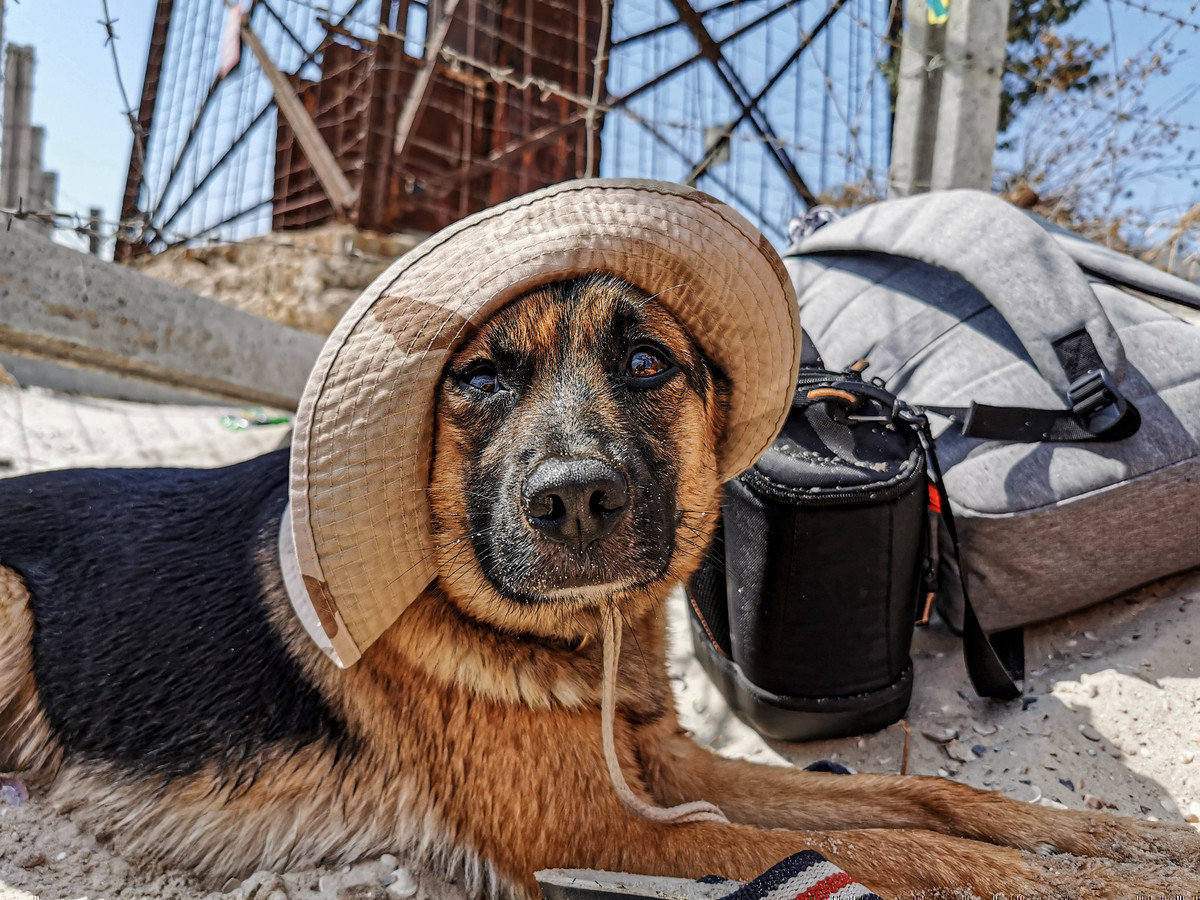 A truly breathtaking and pacifying sight! 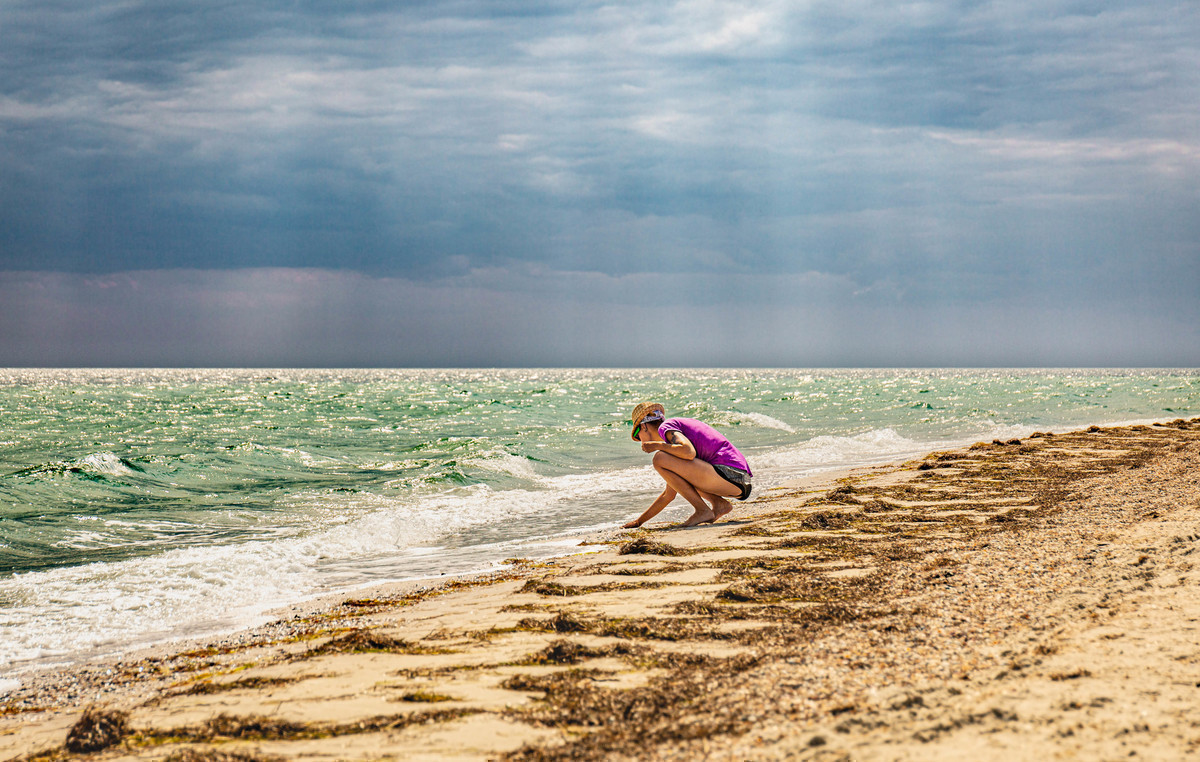 We were somewhat afraid of the cloud on the horizon, but it passed)) 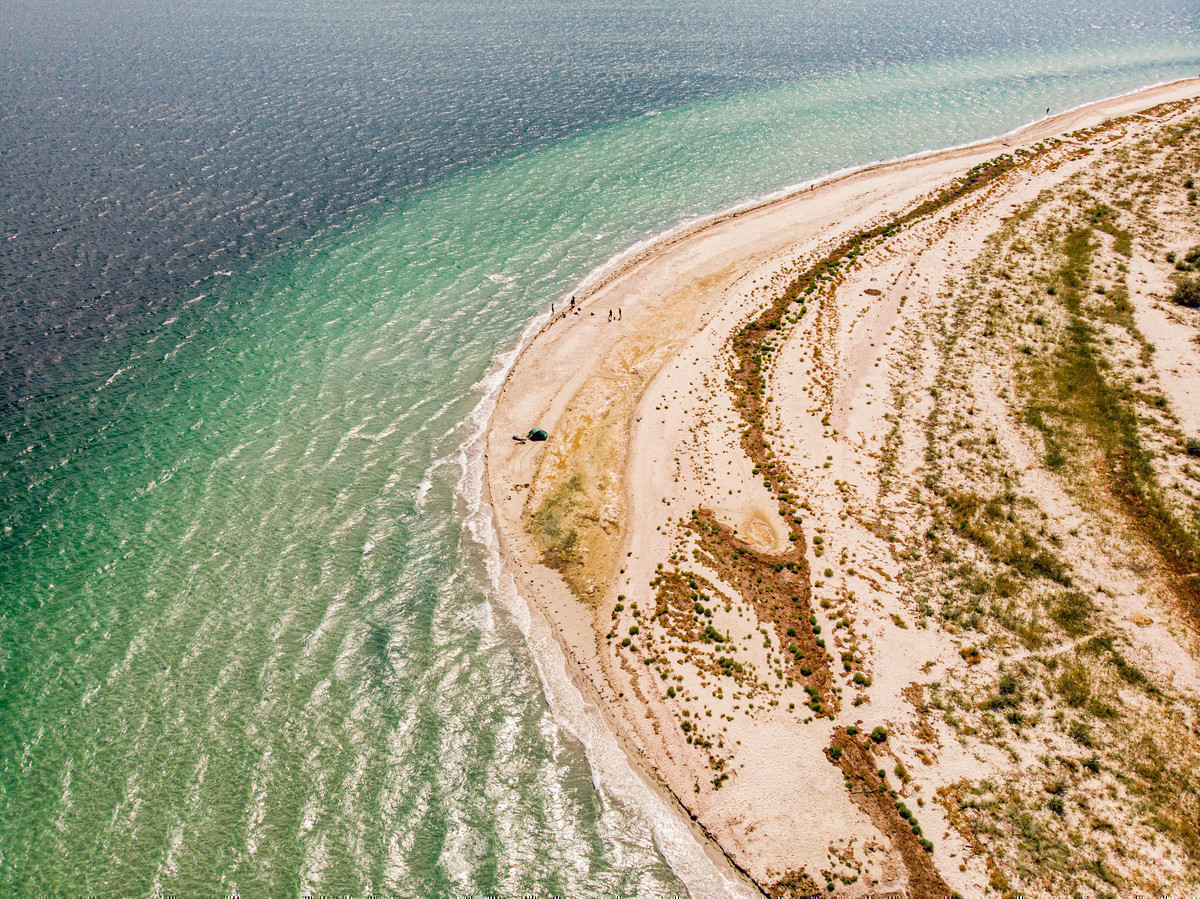 There was almost nobody around – only one person with a tent. The most of the tents stands near the “cultural center” – eateries, showers and toilets. 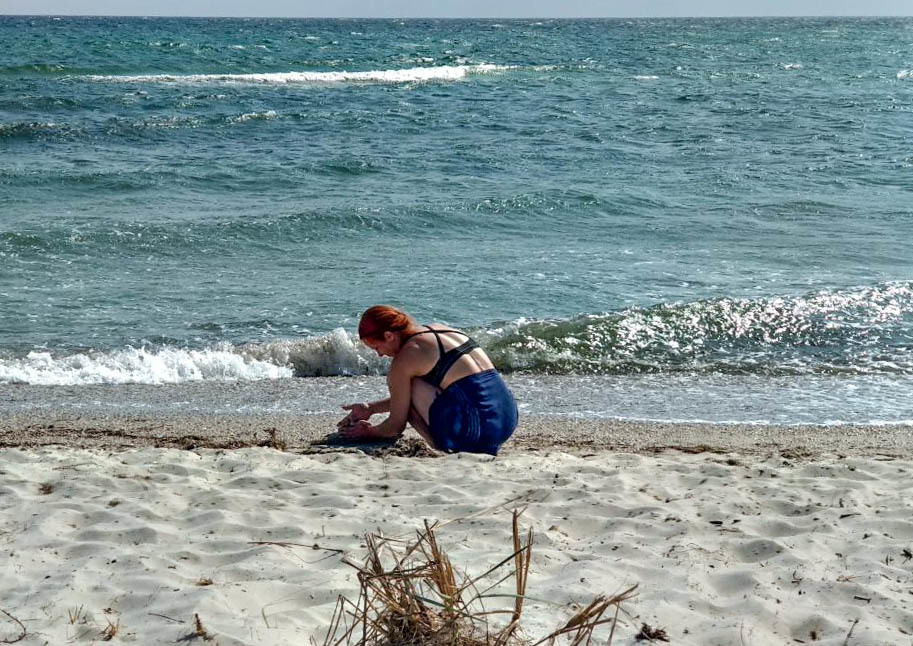 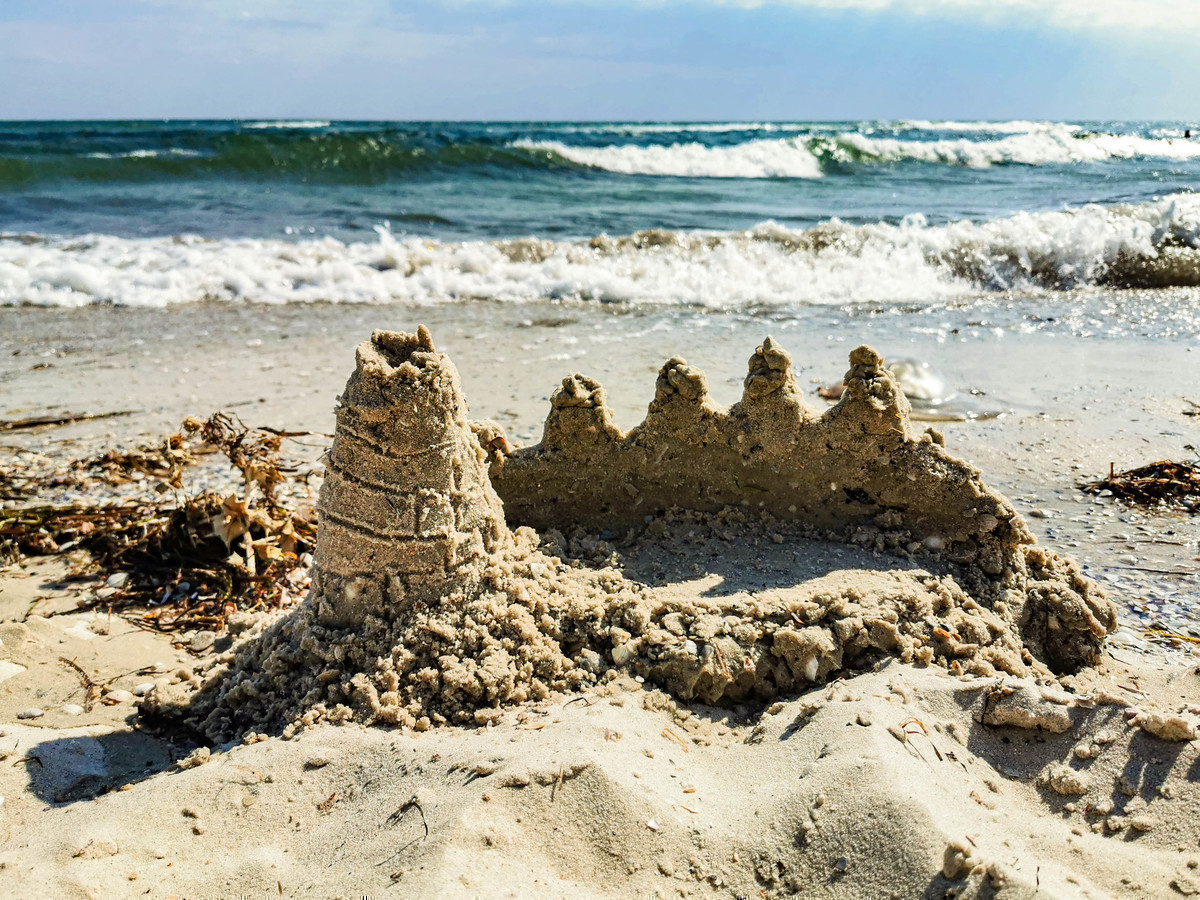 Looked at this beauty and bathed in the sea, we moved closer to food, as we wanted already)) All advertising texts say that you can eat clean and tasty sea food here – fish, shrimp, rape .. Any form and quantity. And that was one of our goals.

There are three food points in the district. In two it was empty – they ate everything, and in the third there was a large queue for food with the joy of the forgotten for twenty years old eatery type. Speaking easier – crushed potatoes with paper sausage, or sticky pasta. Well, chopped cabbage as a salad. True, one delicacy proudly stood on the counter – a fried slope. In addition to this joy of life, we were surrounded by kind lovely people who had a drunken brawl with breaking heads .. To be true – this picture is not surprising – they brought the bodies that were drunk already on the road, unloaded them in the hot sun… Then they got enough diluted cheap beer (or something stronger), finally got heated down… and that’s it. The bodies were again loaded onto water transport and delivered to the mainland. Honestly, we were even glad that we did not go with an overnight stay (taking into account the fact that we were taken to the wrong place). The place, we were at, last year is much nicer, more comfortable and calmer. And it’s good that there is a long walk to the open sea and few people want to do it. Just great! For introverts – lovers of nature and silence, there are still places to relax! Apparently, in each journey we have our own Zhelezniy Port))))

After waiting for the time of return departure and our morning companions, we set off back. At this moment, we were separately glad that we agreed to a motorboat – the waves were very large (according to the captain, up to two meters). We were absolutely wet from the water that flies up when the boat hits the wave (hermetic bags came in handy), but happily got safely to the shore. At first, we thoroughly wiped ourselves, then drove back to Azurnoye to the same campsite we were in last night. 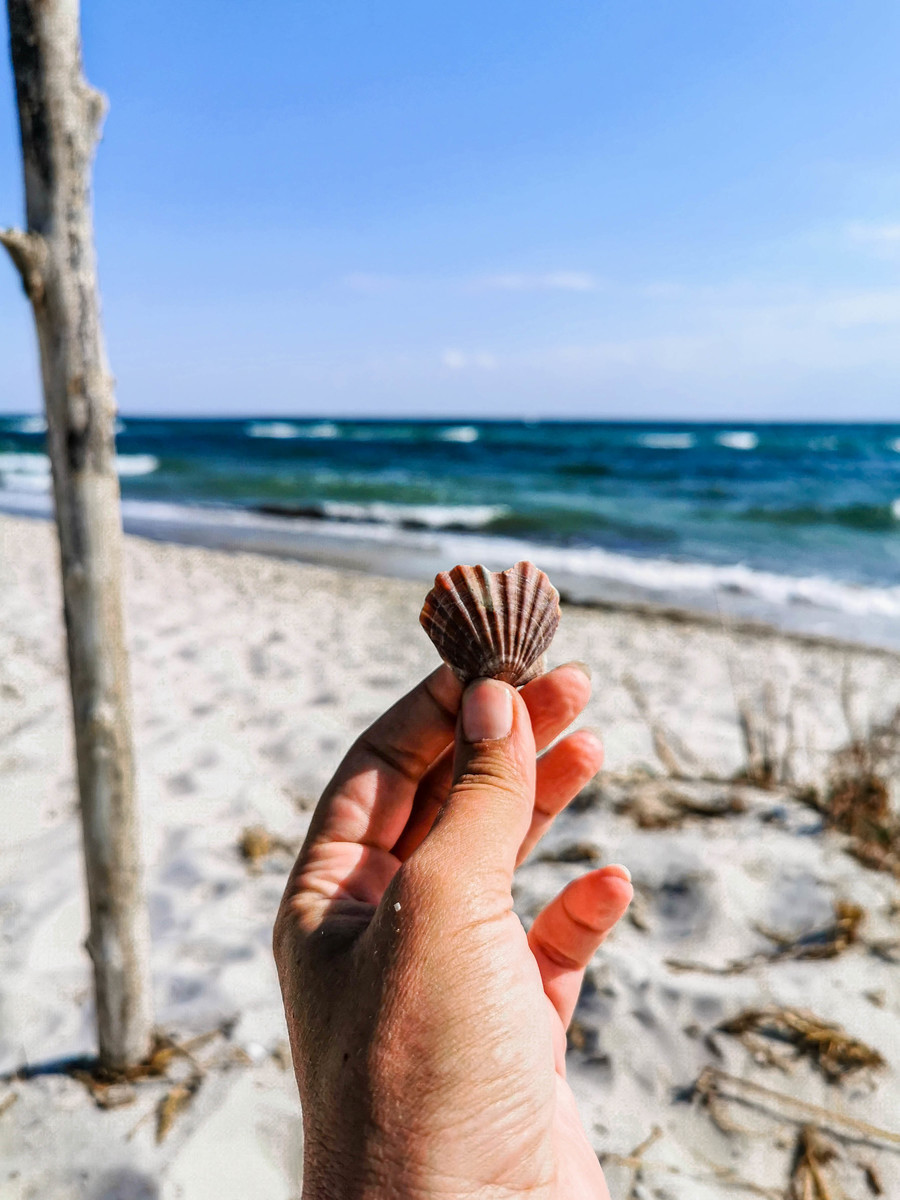 This evening we were lucky – they opened a summer shower for us)) Hot broth and pasties! Beauty! Only the water in the shower was almost icy …
That is OK. But we had hot broth))

The aroma in the thickets of sage is absolutely ma

There are a lot of such butterflies in lavender, b

Follow me!
This error message is only visible to WordPress admins

Error: Access Token is not valid or has expired. Feed will not update.
© 2021 HedgeHog Stories
All rights reserved. When using the materials, an active link and/or direct hyperlink to the materials on the site, open for the search engines, is mandatory. The rights to all materials belong to Dziuba Olga (unless otherwise stated and the source to the originial is not stated) and are protected by the law of Ukraine "On Copyright and Related Rights". The text materials are licensed under CC BY-NC-ND 4.0.