“The steppe winds challenge” or the eighth Nakipelo-expedition of 28.11.2017

The shorter the day is, the earlier we get up… The wake-up call was at 4 am, followed by brewing some tea and coffee, and it was -5 C outside. It’s not so cold in the city at this temperature, but when you spend hours in a windy place…
The experience gave us the hint, the reasonability agreed and the rucksacks acquired the additional set of warm clothes.
The curiosity drove us to put on some heroic act and suggested trying out the Bulson padded moto-jacket instead of the familiar sheepskin one. The reasonability gave a sigh and moved aside. In vain it was)))
This time we took the Patricia only, as the Hedgehog was in the process of being repaired and the Patrick was waiting for the heart transplant.
Well, what may I say – 7 people in the Patrol can be rather comfortable during more than 300 km route. 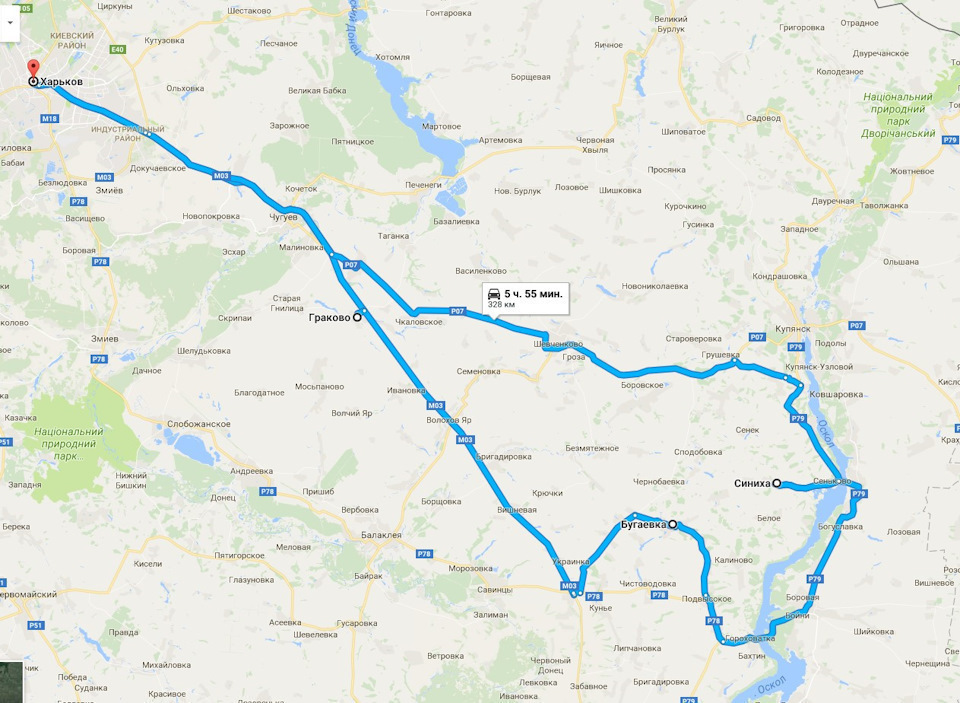 After packing everyone and everything including the food, we were ready to go.
The windows demonstrated the same and ordinary view up until Chuhuiv. It wasn’t a big distance afterall.
It was after Chuhuiv when the view slowly changed to the picturesque and fairytale-like one. These were the views that usually create a holiday and joyful mood. That is, if you don’t attempt standing in the freezing cold and windy field for more than 10 minutes with a camera… But the beauty really was amazing! 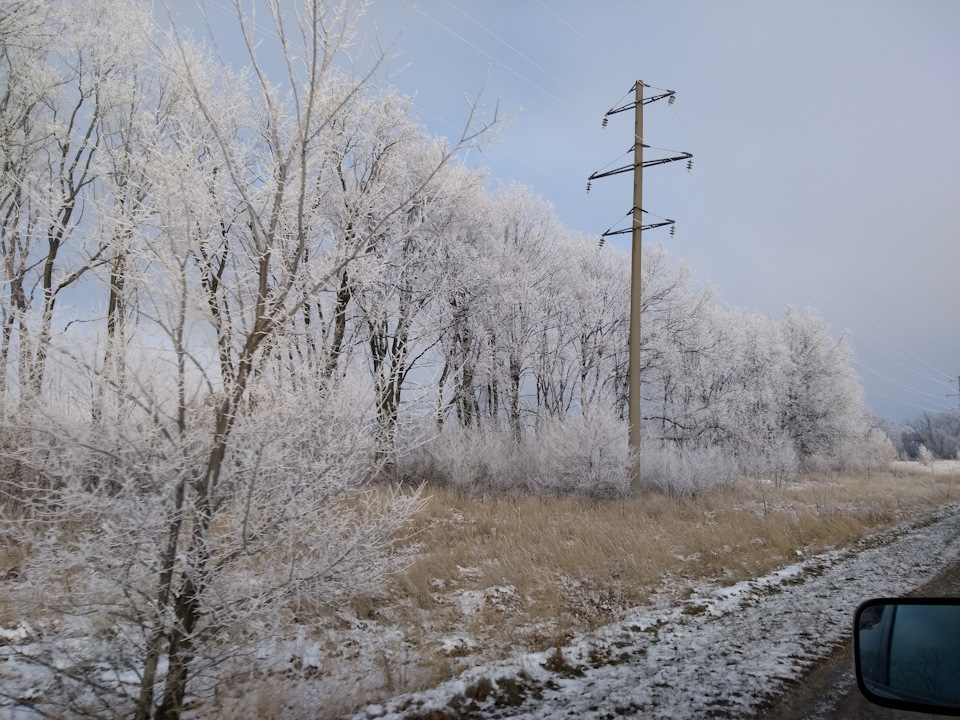 The first object was the Trinity Church built in 1810 in Grakovo village. We had suspected our favourite “renovation” (plastic windows; uneven white plaster walls; mounting foam sticking-out and such) before even starting to plan the trip. Well, the renovation had only began, but the plastic windows were already installed)) 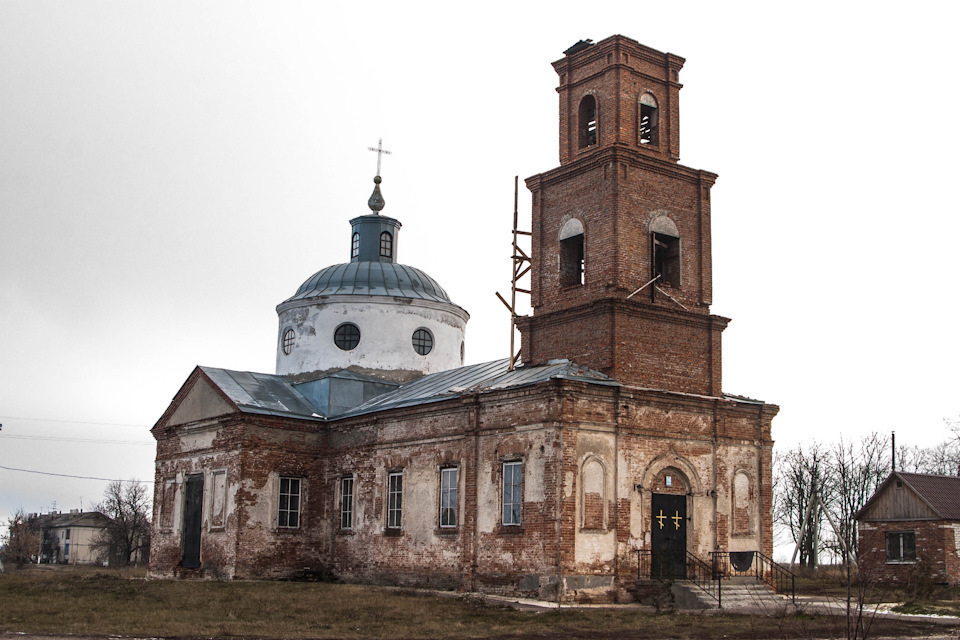 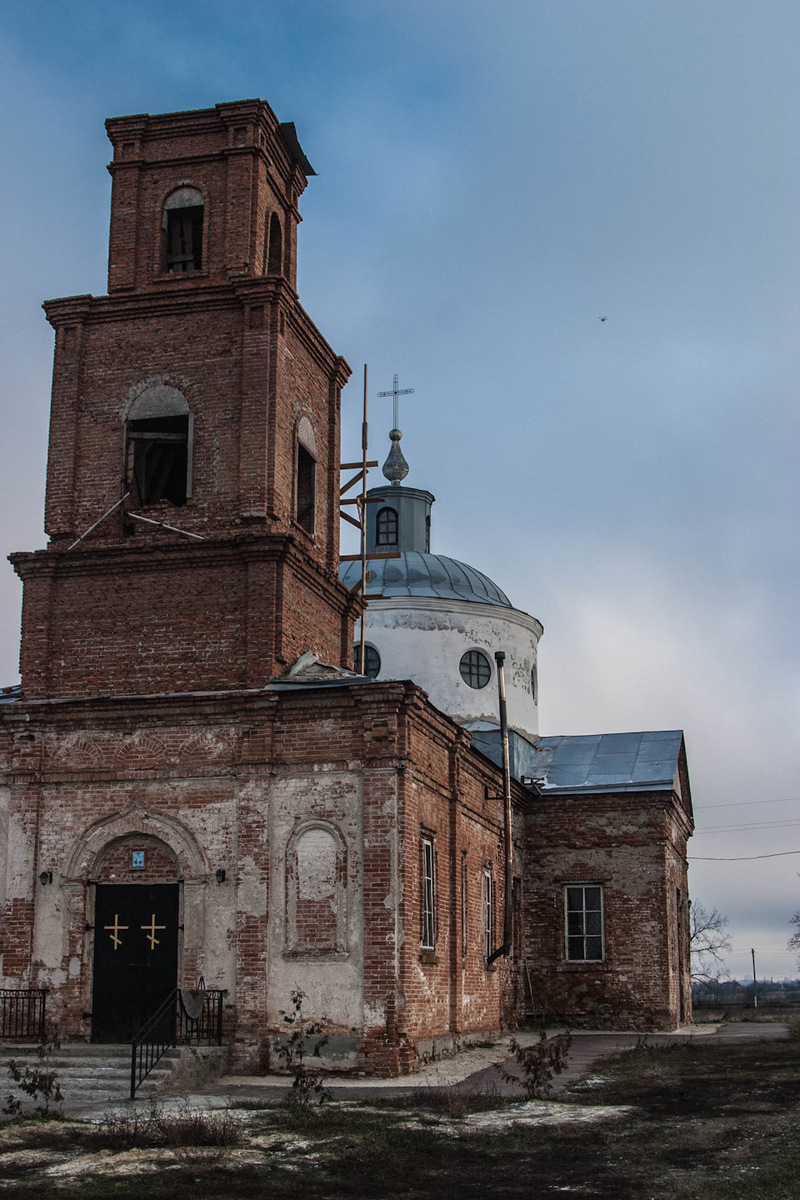 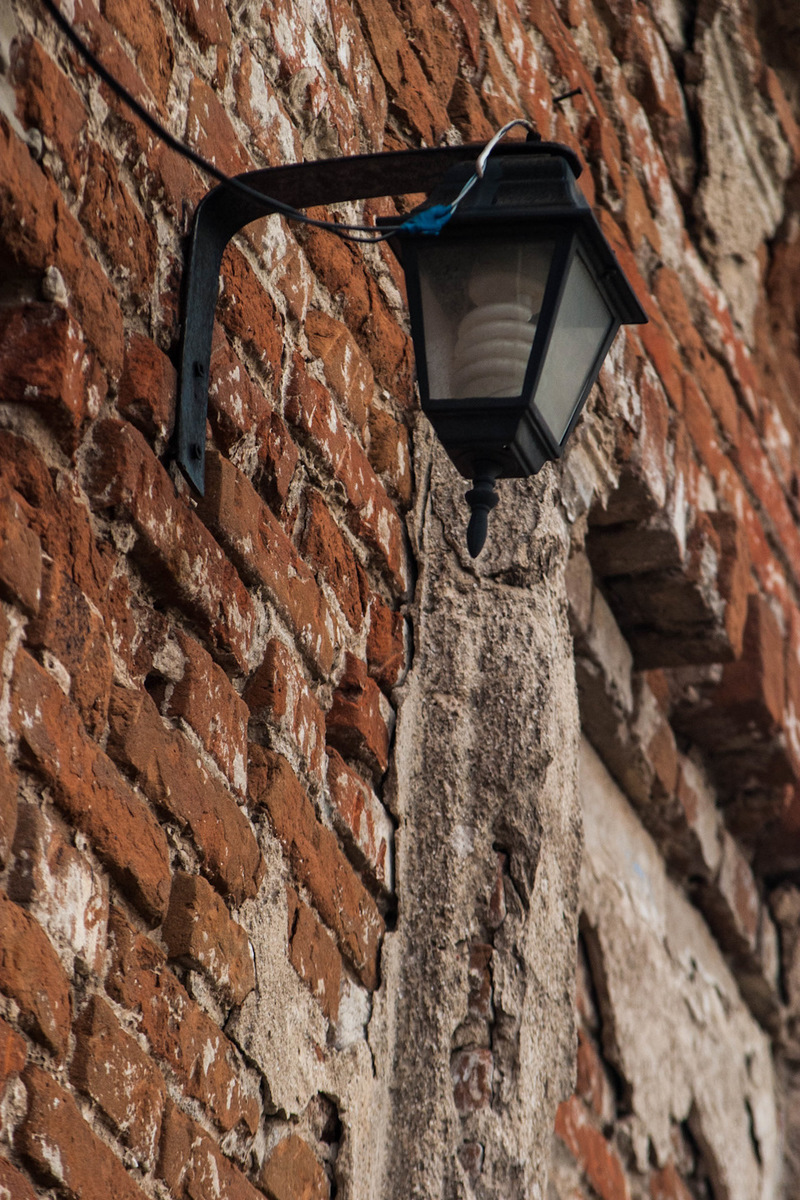 Having finished the sightseeing, we loaded the Patricia again and hurried to the next point of the program. There were a few stops on the way to run around and film the thrilling and chilling beauty)))) 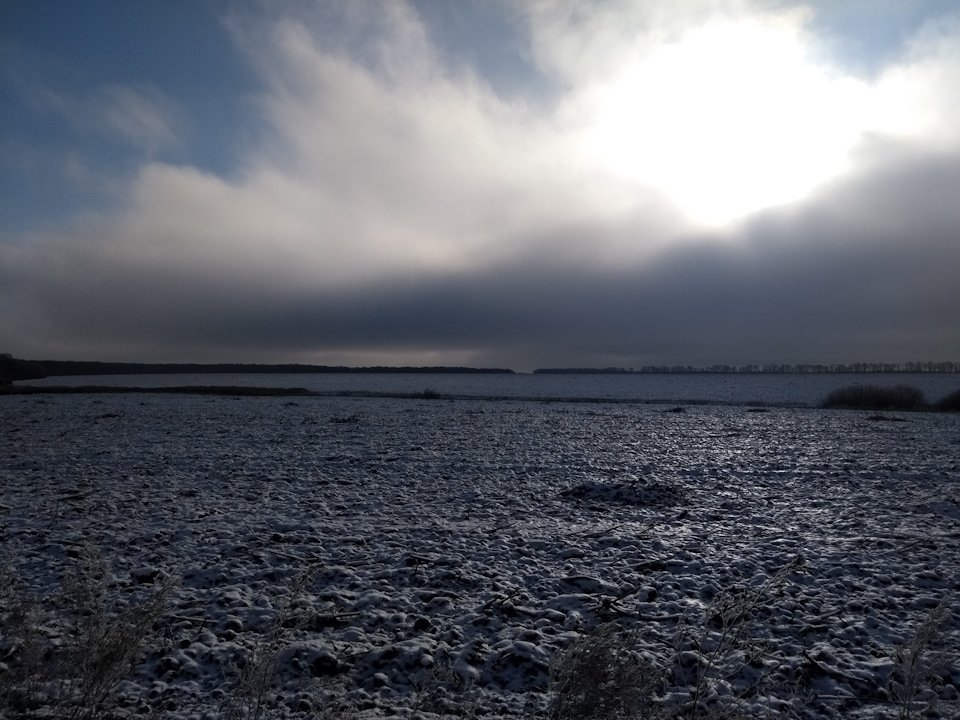 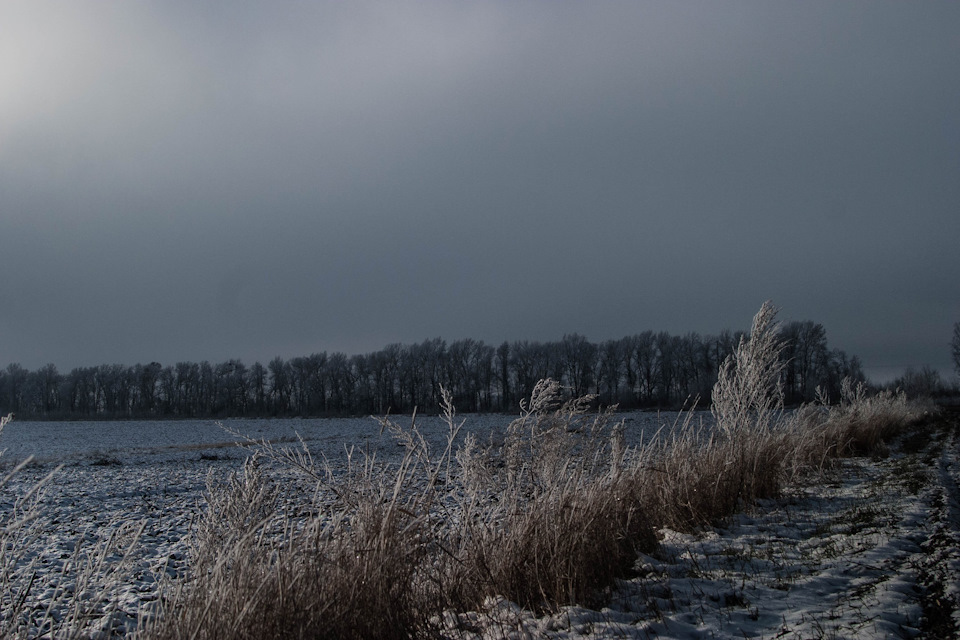 A little bit of the way:

There was the old cathedral in Buhaivka we were interested in. It was built in 1819 to honor the Akhtyrka Mother of God icon. 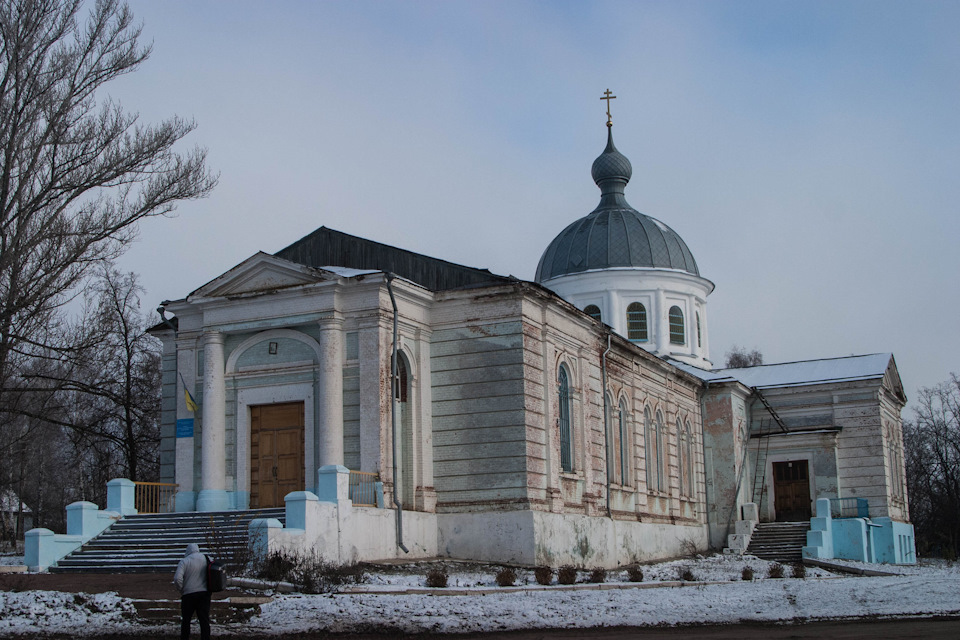 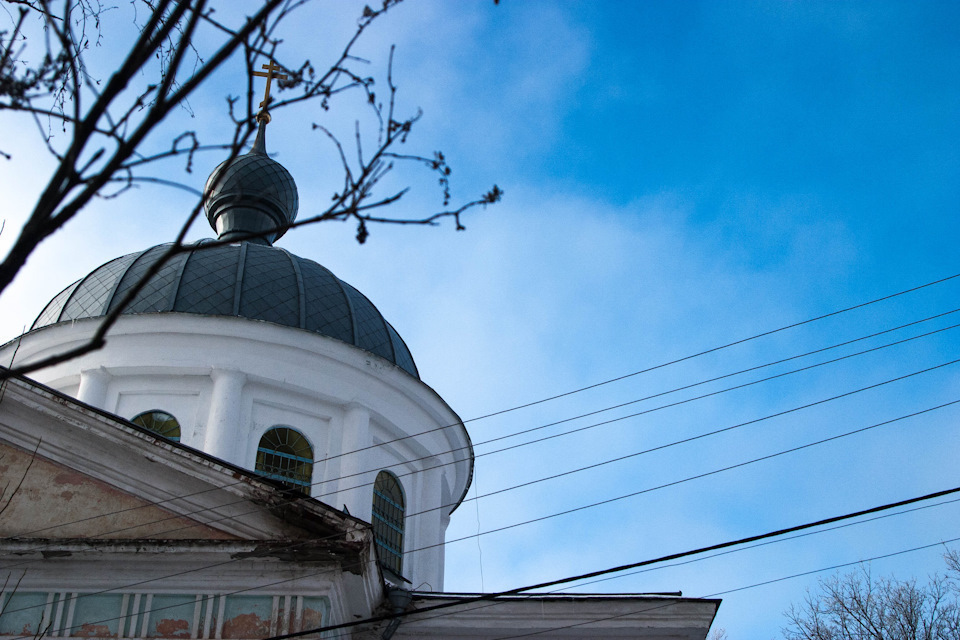 While we wandered around, some of the Bible stories were remembered. The church is located on a small hill (about 2 meters high), and there is a bunch of second-hand stuff and fishermen shoe sellers down the hill)).
Then, the batiushka (a priest in an orthodox church ~tr) appeared out of nowhere. He was a smart-looking middle-aged man in a coat and boots. He suggested to open the cathedral for us and to tell us some stories about it. We were glad to agree – it was not only interesting, but also warm inside!)) So we listened to an amusing lecture on the catedral history, took pictures of everything possible – it was tidy and clean everywhere. It was a pity, though, that no frescoes remained (as usual) and there seemed to be no plan for re-making them… 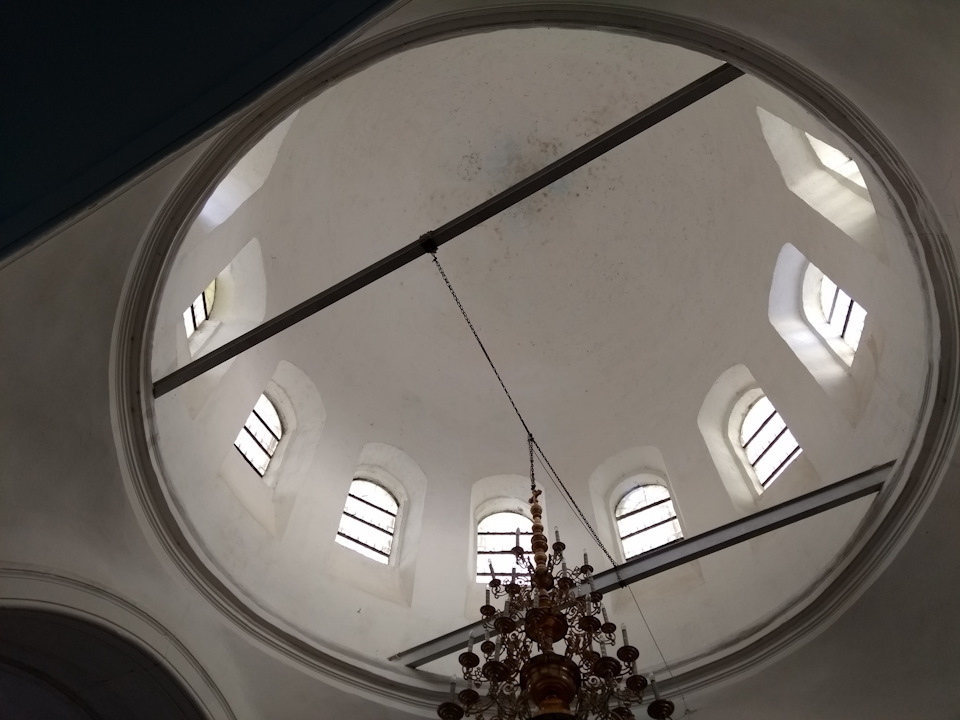 We were even allowed to step into the pulpit – that same place, hidden behind the screen with the icons (I am not sure what the correct name is) – it was in the oldest part of the building.
While one part of the group went up to the second floor with the remnants of the bell tower, the rest of us were listening to the respectable man and became familiar with the materials he had found: 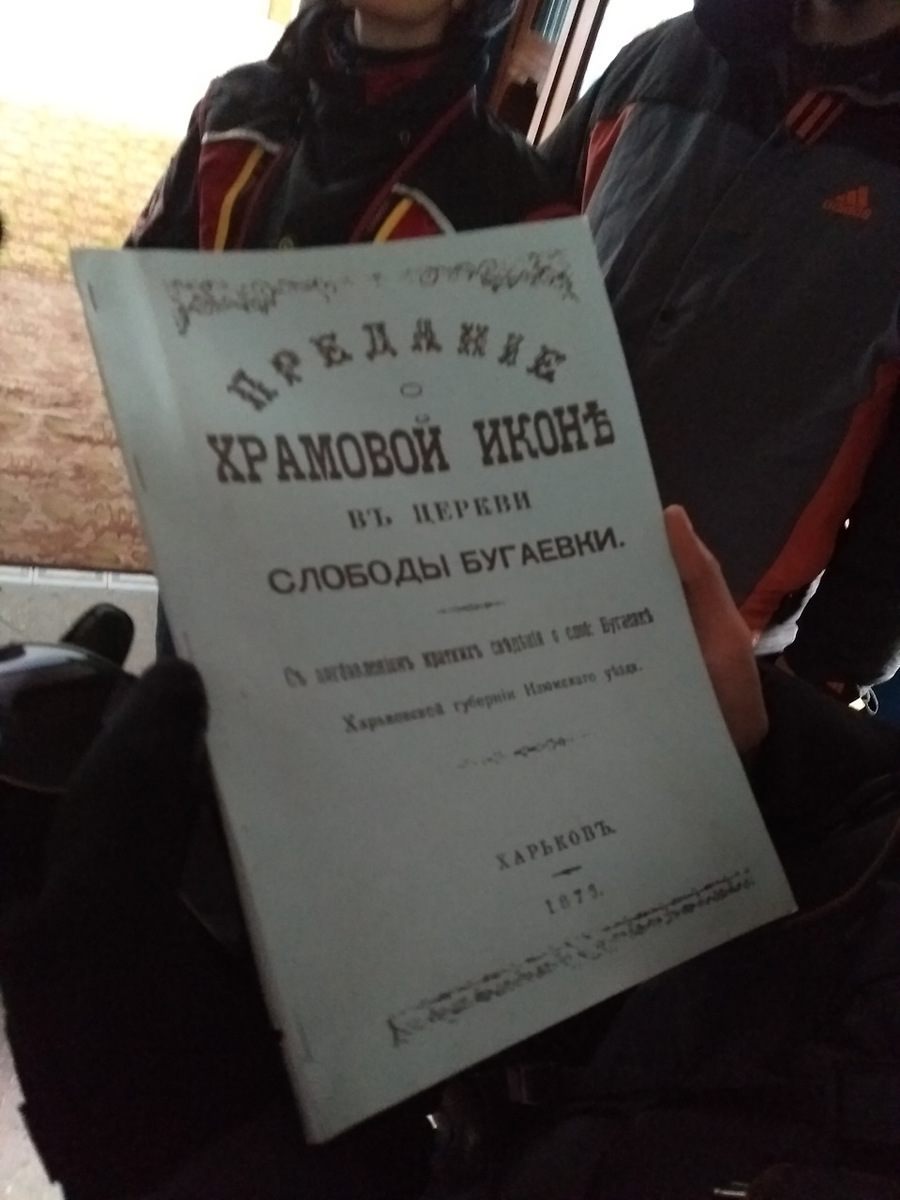 The second floor was more of a dump and ruin. We were told that “there had been a boiler and a projector room for the cinema, but we stopped using the heating”: 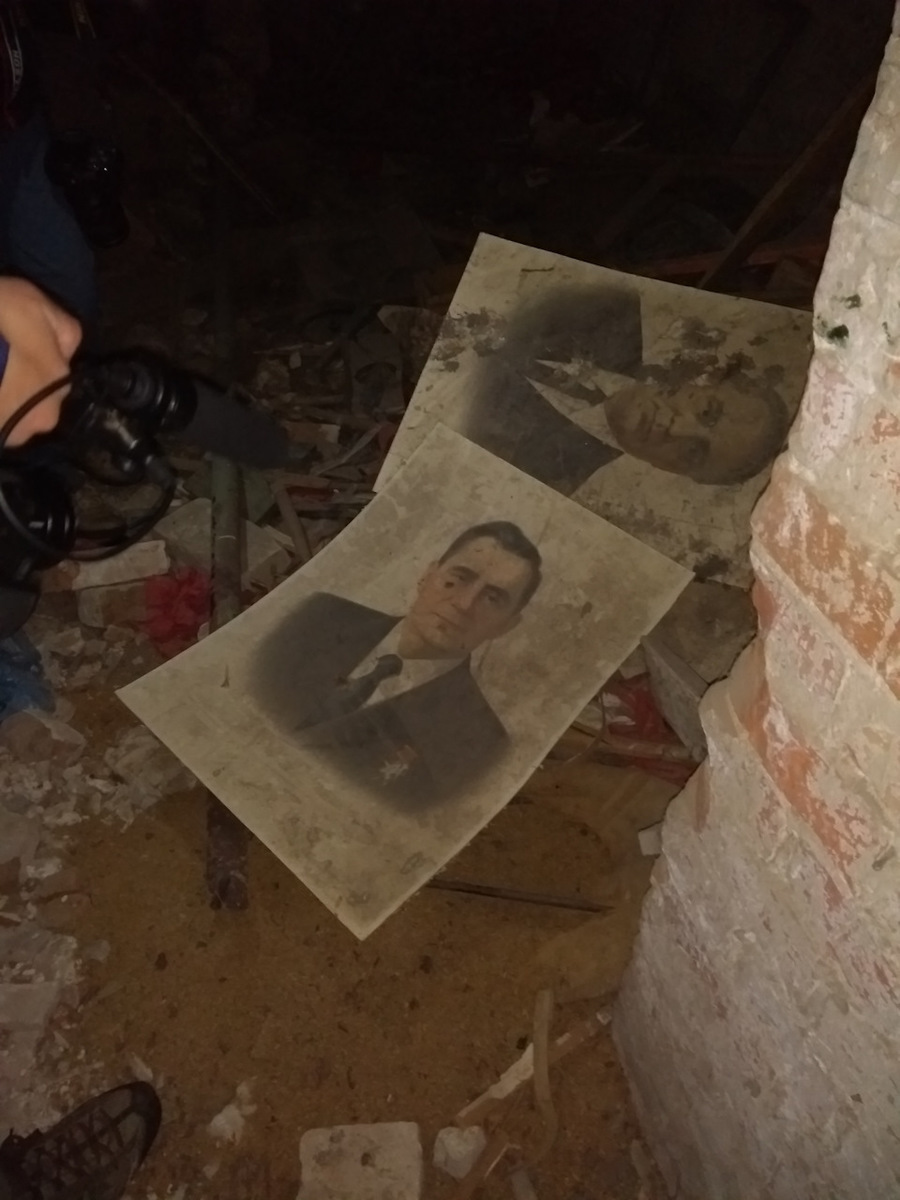 The weather was changing a lot – the bright and sunny weather with an extremely blue sky changed rapidly to silent-hill type of thing: 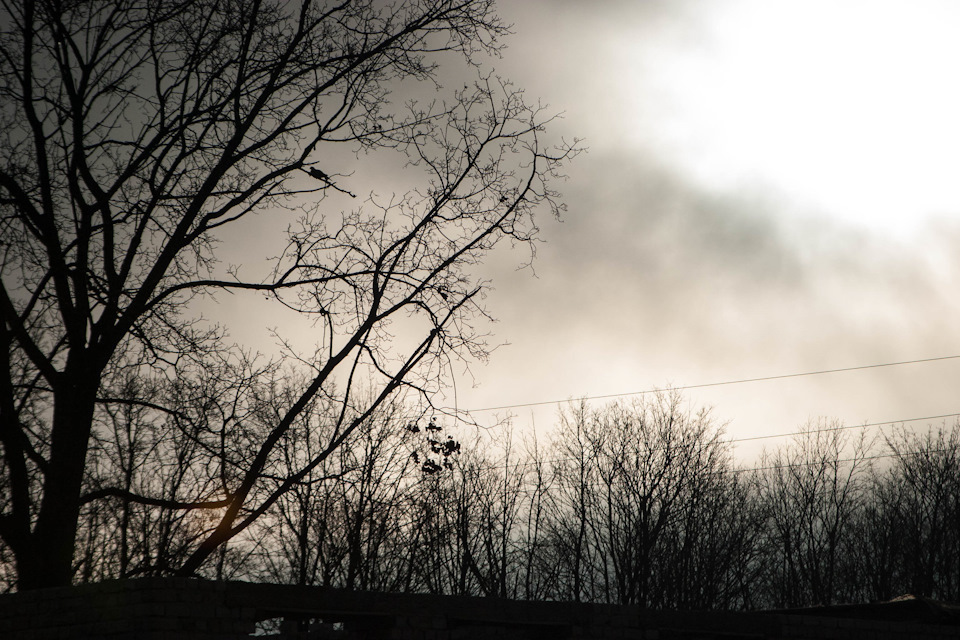 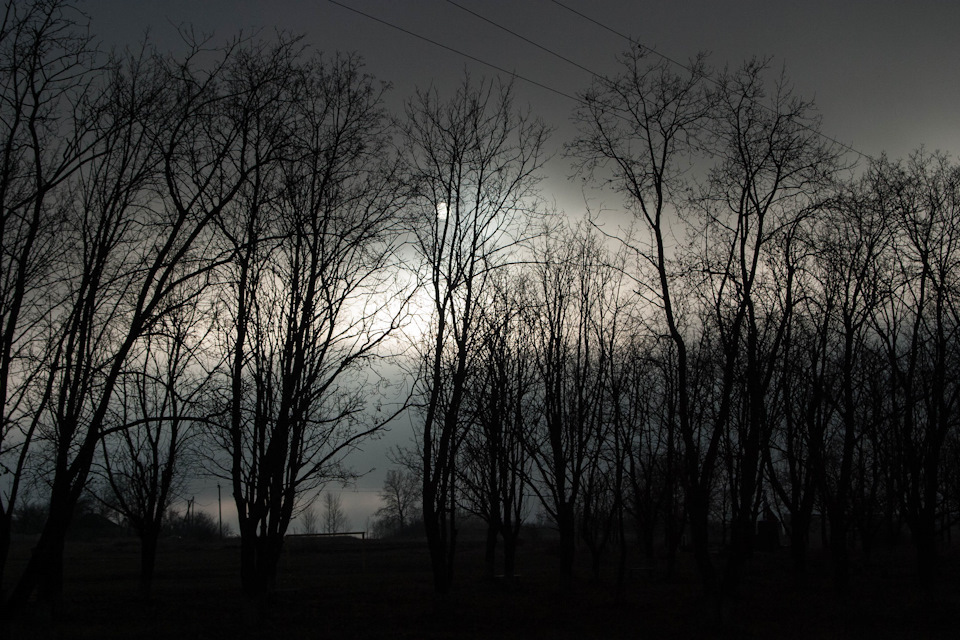 It has to be noted, that most of us had already been freezing by this time, because the wind was severe and wet (-5C was not enough to stop the dampness) And I was very happy for choosing the right clothes, – except for the jacket, as having no hood caused a lot of trouble. I had to use a thin sweater hood above the warm buff. Still, it came nowhere close to the thick sheepskin one(((
In fact, it would be nice to write a separate huge article on equipment. Many people who have no experience in tourism and expeditions do not believe that wearing a thick warm sweater and wool underpants is necessary; or that gloves, scarves and such should be of a specific material ((. And many other things are generally underestimated, too.
And then there comes a rather peculiar situation of giving out the warm socks, scarves and other stuff that we have carefully packed for this purpose. Luckily, most of the people learn from the first time, and I am not an exception))). I am not talking about this specific expedition – these are just some thoughts on the topic, in case it comes handy to anyone)).
The eternal question of the expedition hadn’t changed – ‘when are we going to eat?’)))) In addition, it was cold this time, so the calories were needed even more than usual)) We made a brave decision to finish everything before eating.
The next spot (and the last one for this trip) was the Tykhotsky country seat in Synykha.
I am not sure if this has overpowered the impression the Bobrove ruins had given us…
When we approached the estate, we couldn’t understand how to get there first, because there were the villagers’ houses and cattle fences everywhere. We were forced to waltz through something like private property with the thick lines of the ducks and their troughs. The locals were merciful enough to allow us to go and take pictures there… “just don’t smoke in that place, there’s hay”. And there really was hay – one side of the estate has turned into the hay storage. 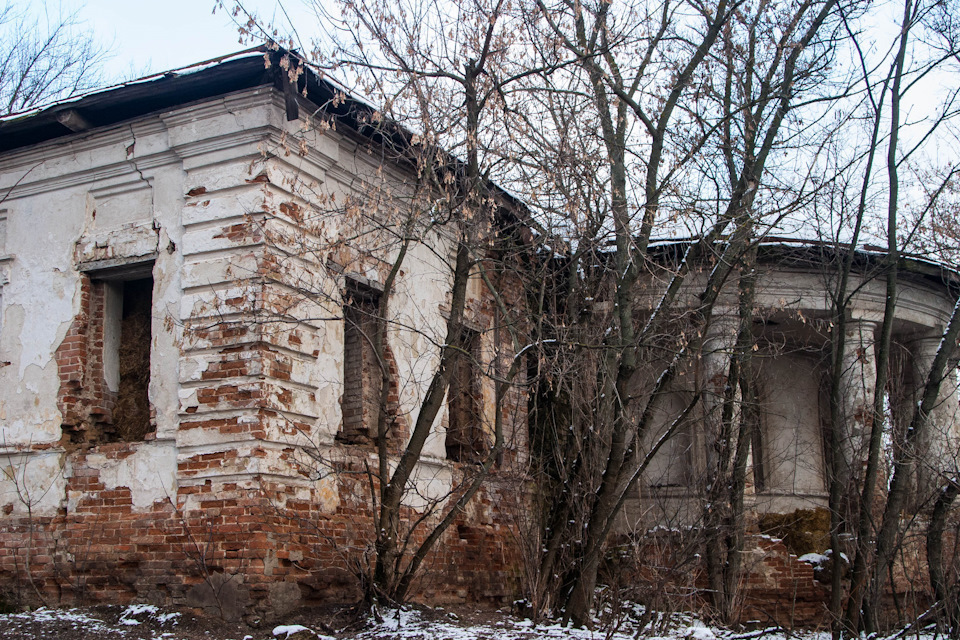 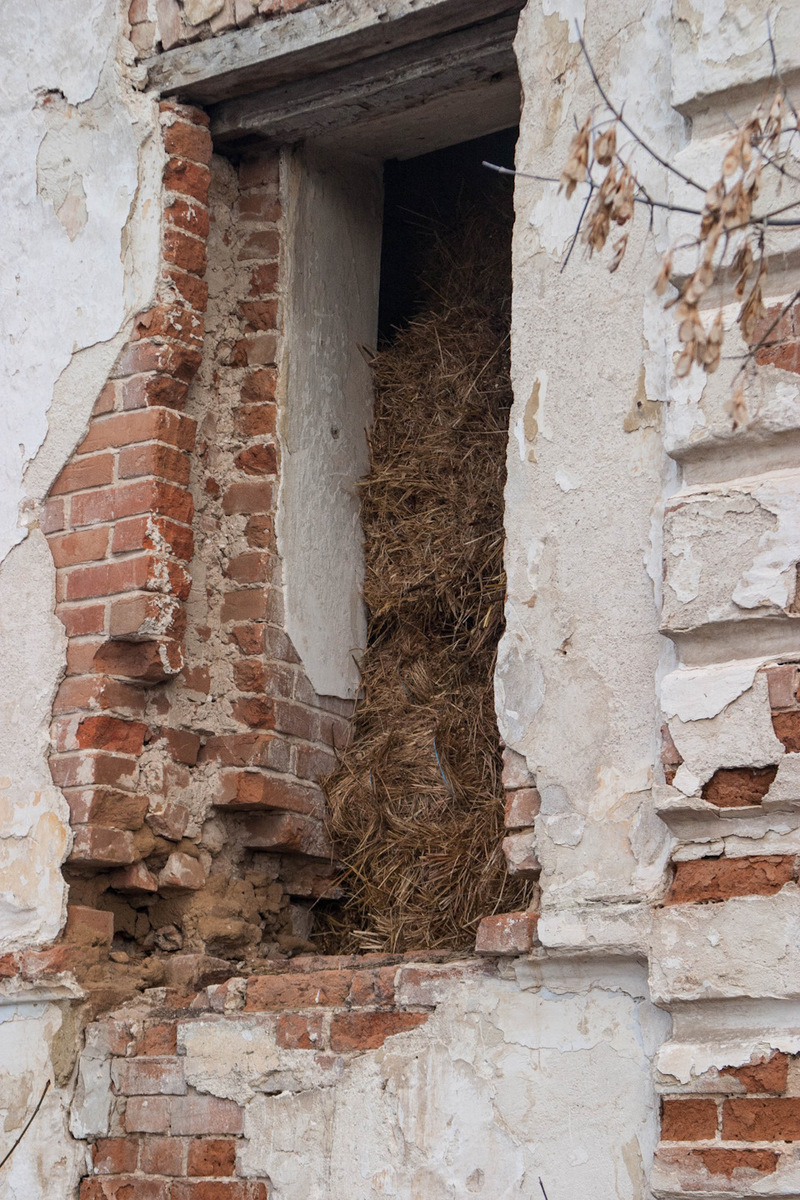 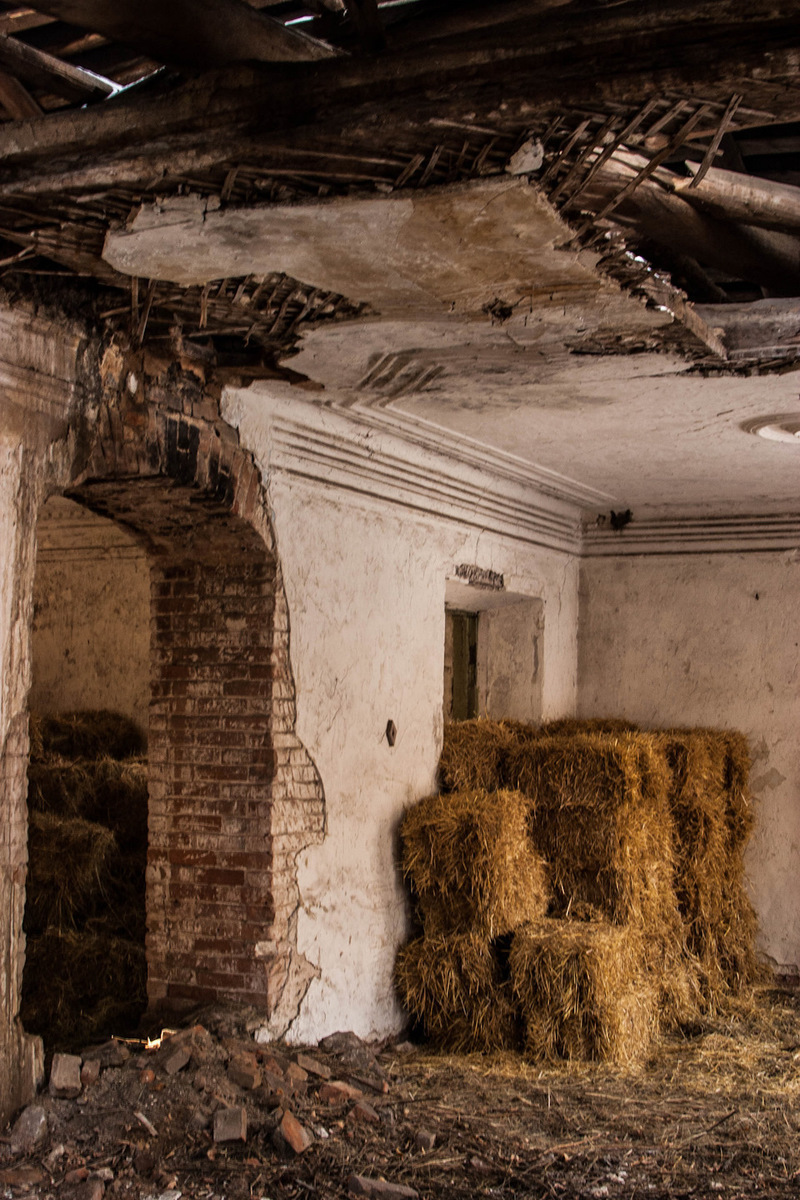 So this historic place has been functionalized and successfully used. It would have been logical to keep it in a decent condition then, wouldn’t it? Yeah, right… no one cares about it. Let it fall apart and hell with it.
And the other side has been magically turned into the barn by the “duck neighbours”! They simply attached the fence to the building, and, being protected by this pitiful fence, they stood and cursed at us for taking pictures of their private property. They were very prompt in taking the cows away in order to save them from being filmed. 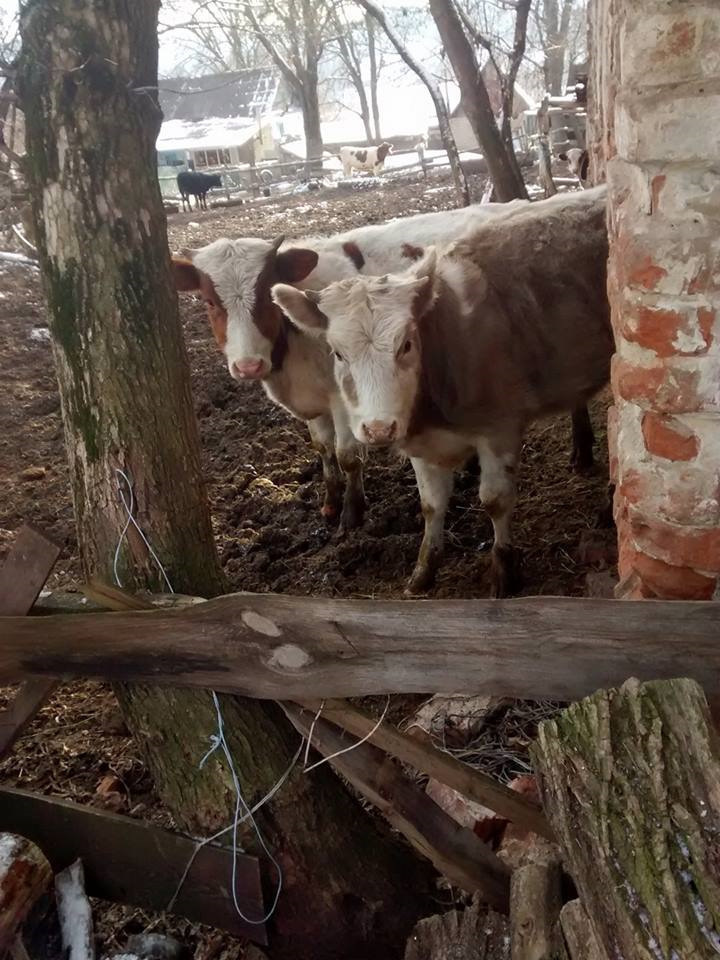 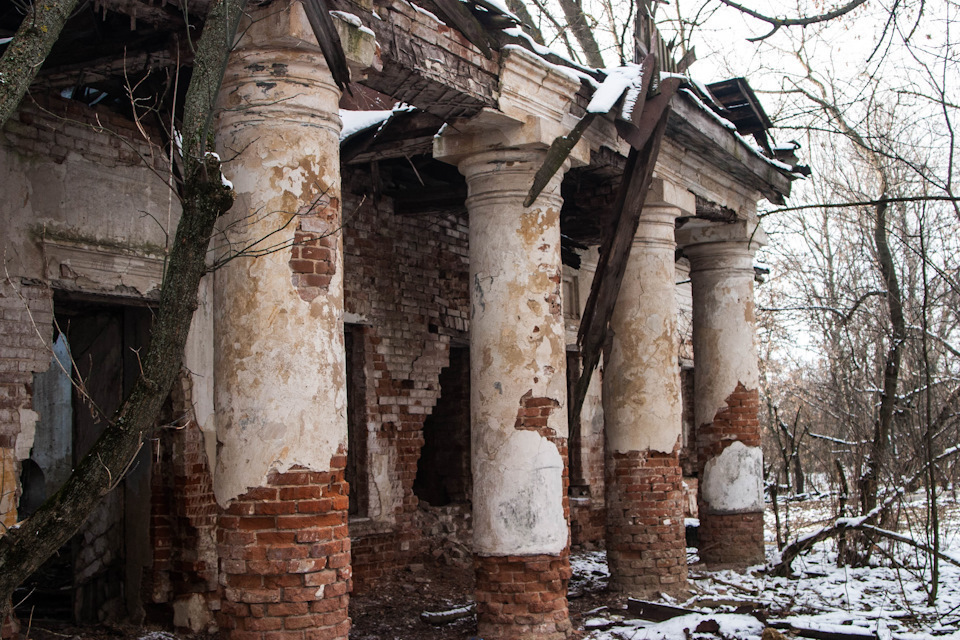 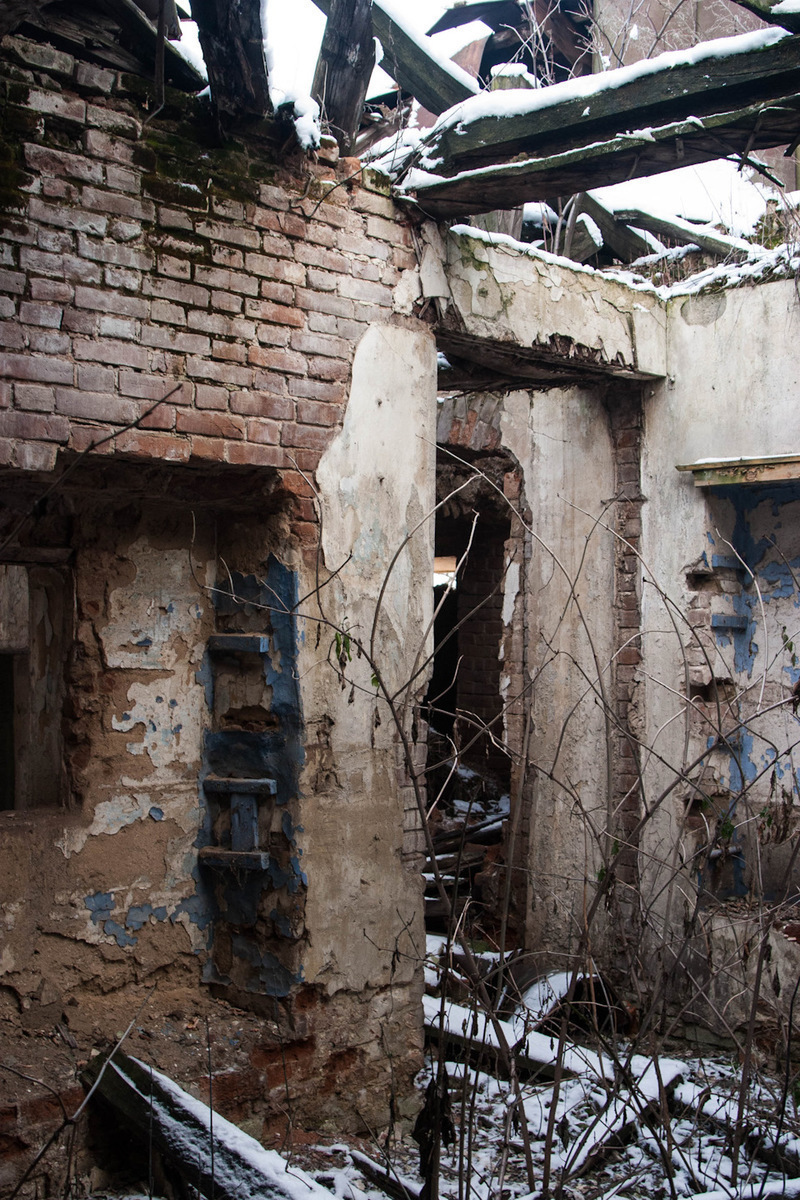 I lack words to express my feelings and emotions when I see pictures like this… It is, to the very least, sad and sorrowful. I feel pity we don’t have the people who would renovate the historic monuments, that the locals don’t care about their own history and destroy whatever is left…
I hope our expeditions will allow more people to see what we have here on this land, before it will have fallen apart completely. And – who knows? – maybe someone will want and be able to start reconstructing it….
And now – the long-awaited food! Usually we simply unfold the food on someone’s car hood and enjoy the meal altogether. But this was not the case! Naturally, this weather persuaded us to take the calories in while sitting in the car and trying not to spill the tea all over))))
Winter expeditions do have a number of difficulties, but there are some pros as well. It gets dark early, and it is absolutely impossible to take pictures after 16.00; therefore, we can come home around 5 pm, which is very nice!