The August Nakipelo-expedition (30.08) or how to get excessively exhausted)

After having gone through an extreme lack of sleep and upon taking the Hedgehog from the Boss I added some food to the things that I had never gotten to unpack, I managed to go to sleep after midnight again…

And then – getting up at 5.30, inspecting all the stuff, warming the car up, trying to settle all the things in the car in a most effective way… Meeting up, organizing the passengers, figuring out where exactly we are going )))) Well, at least it was this way for me, as I was in a situation of “going to the Ball straight from the ship” )). I received a very unspecific answer “to Mogrytsa” and calmed down. 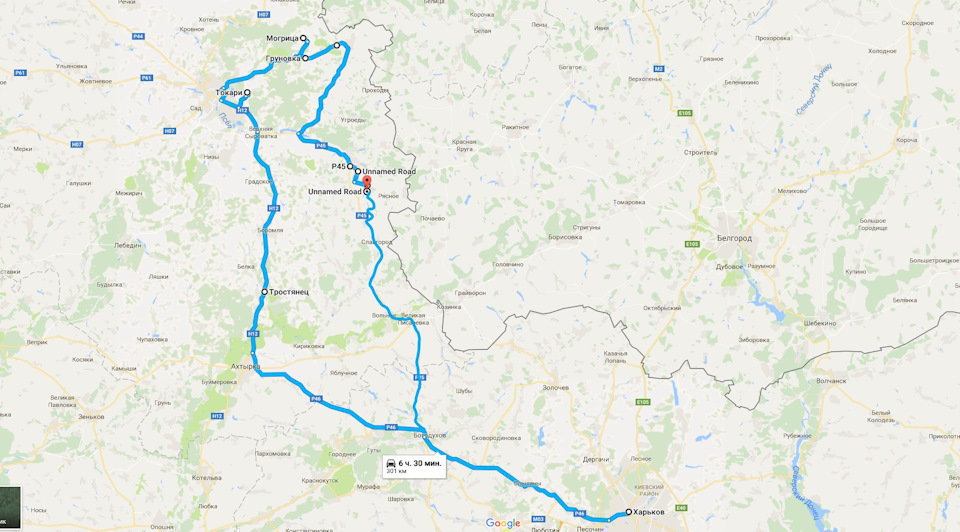 I was forced to finish creating the route by using a marker pen since GoogleMaps does not allow adding any more dots.
I took the tail spot in the car line and didn’t really bother where we were going – I was simply following the cars in the front)).

But! Some odd smell of burnt oil appeared when I drove 80 km per hour or over… We did stop, circled around the Hedgehog while trying to find the source of the smell, found the upcoming finale of the gasket under the engine head. We didn’t rest at that, however, for it was too little to explain the level of the smell we had experienced. In fact, it was hardly a 2 cm mark of oil. We examined the underneath of the car… and there was the right back ammort that had obviously been torn off. To be more particular, it was the bracket of it. And the oil leaked onto the cardan and the exhaust pipe. 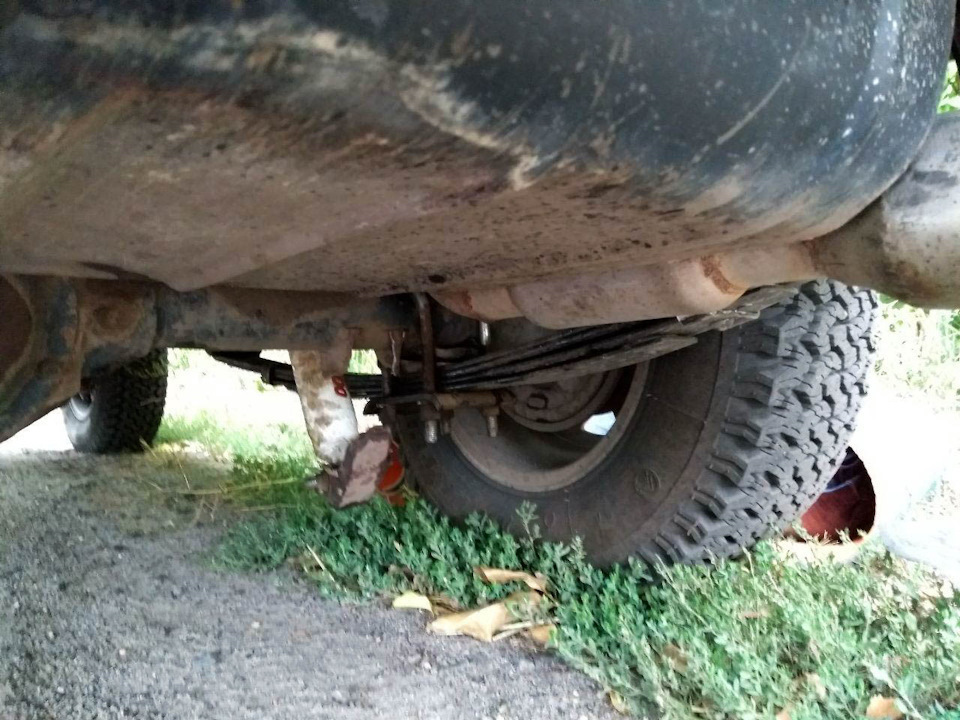 Well, we grabbed the tools, took the ammort off, put it inside the car and that was it) We simply continued on with the route))); which is yet another option that strengthens my love for this car))))

This time the gentlemen decided to take what it’s worth: 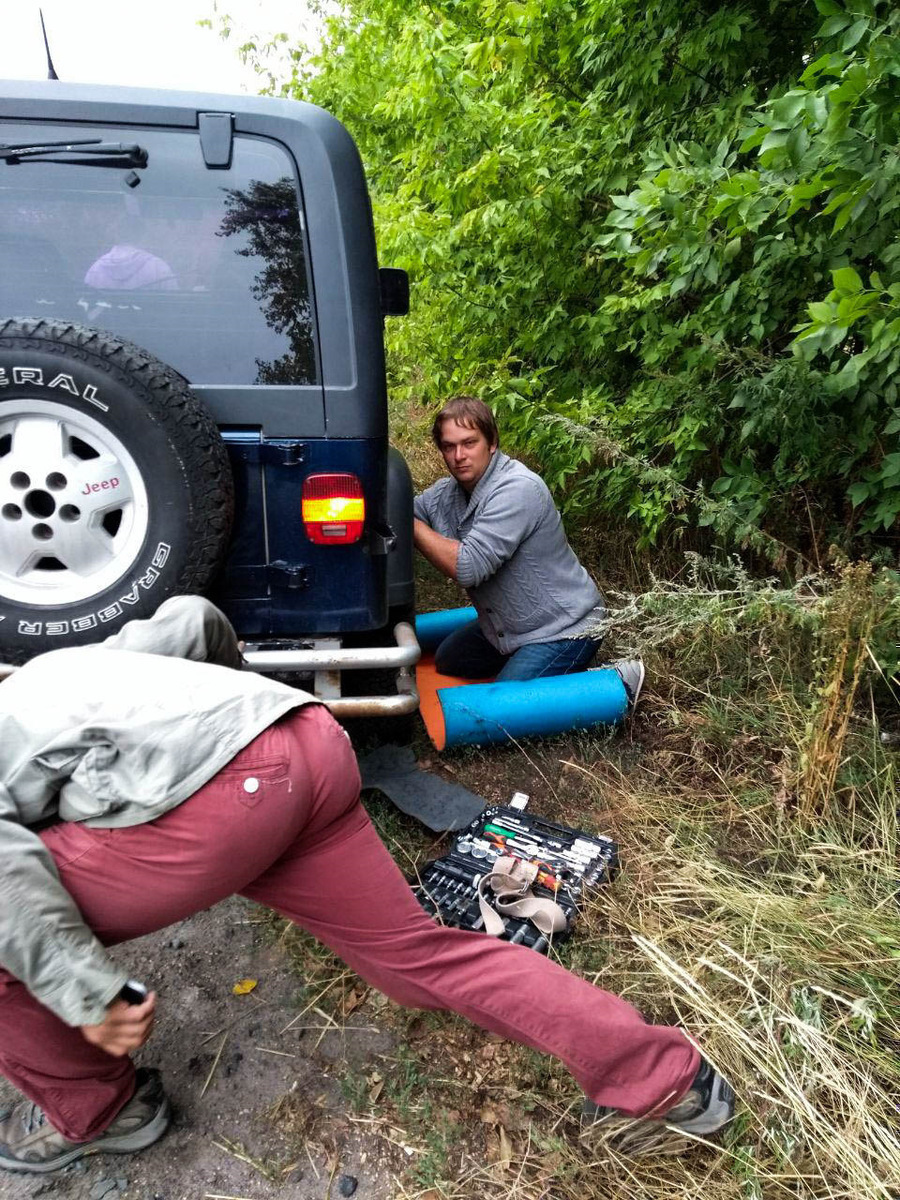 The first stop of the program, quite unexpectedly, was the Golitsyn-Koеnig Manor built in the middle of the XVII century. Under the flag of “ah, we might as well visit it since we’re here anyway” we decided to take a look at the Manor and the Regional Studies Museum located in it.  That awkward moment when the opinion of the tour guide about the role of separate characters in the regional history definitely differed drastically from the one the head of our expedition had, gave us an obvious hint that we wouldn’t have spent a lot of time there. Despite the fact that our boss was too polite to prove and force his point ))) So we sped up to the halls and went to wander around)) 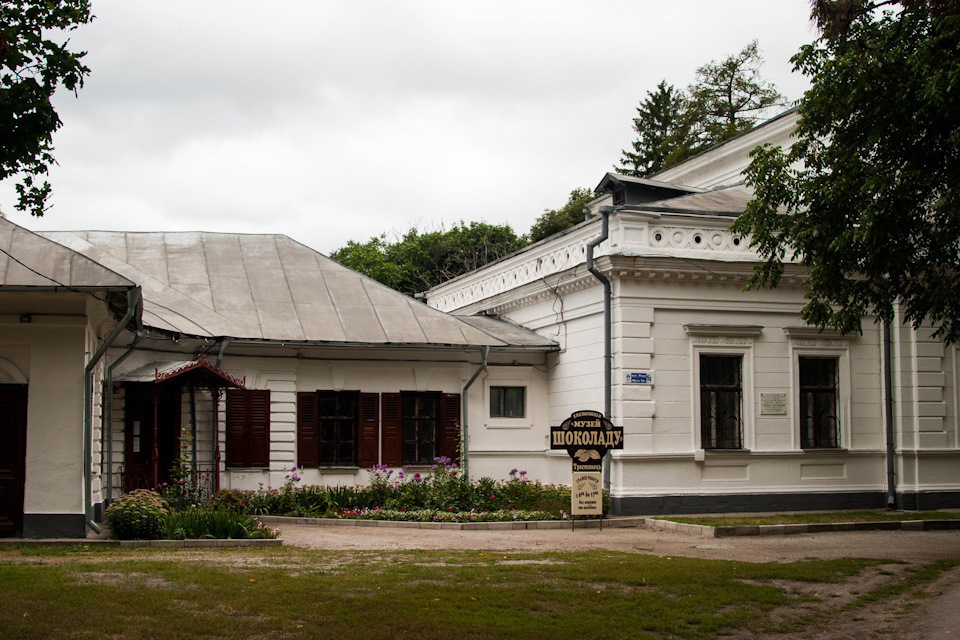 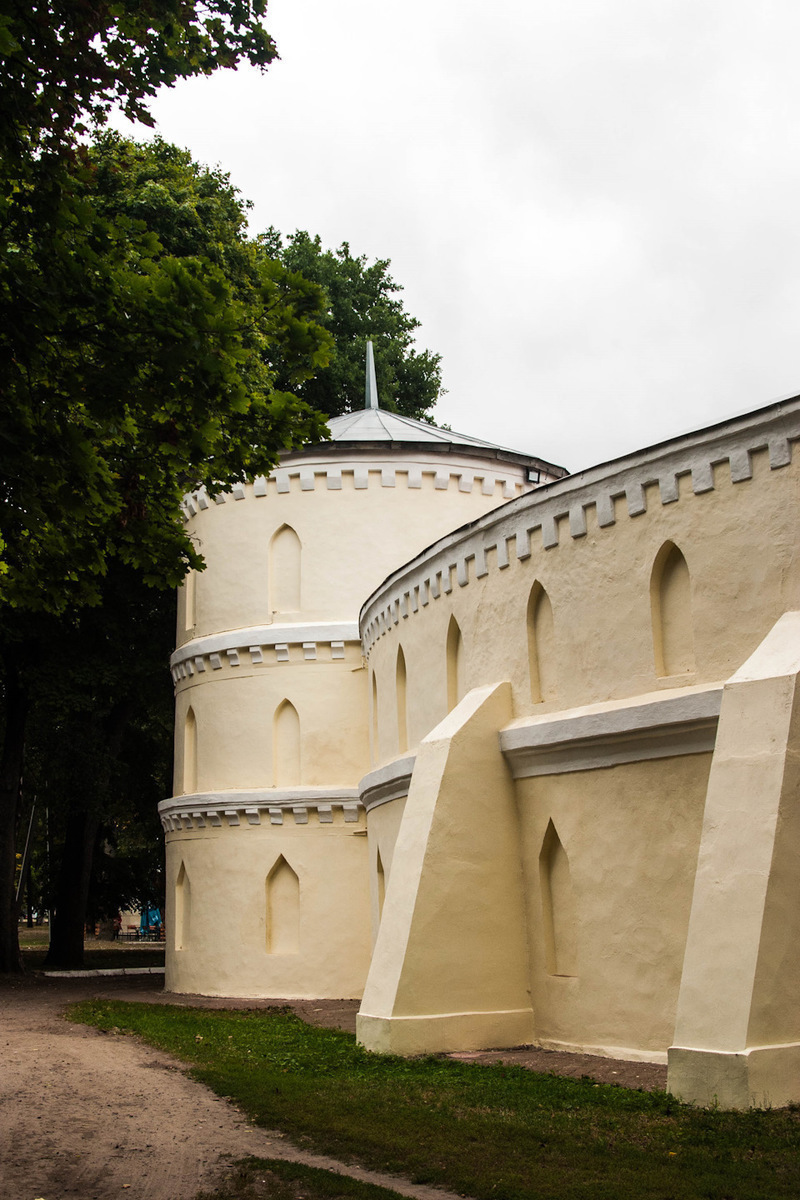 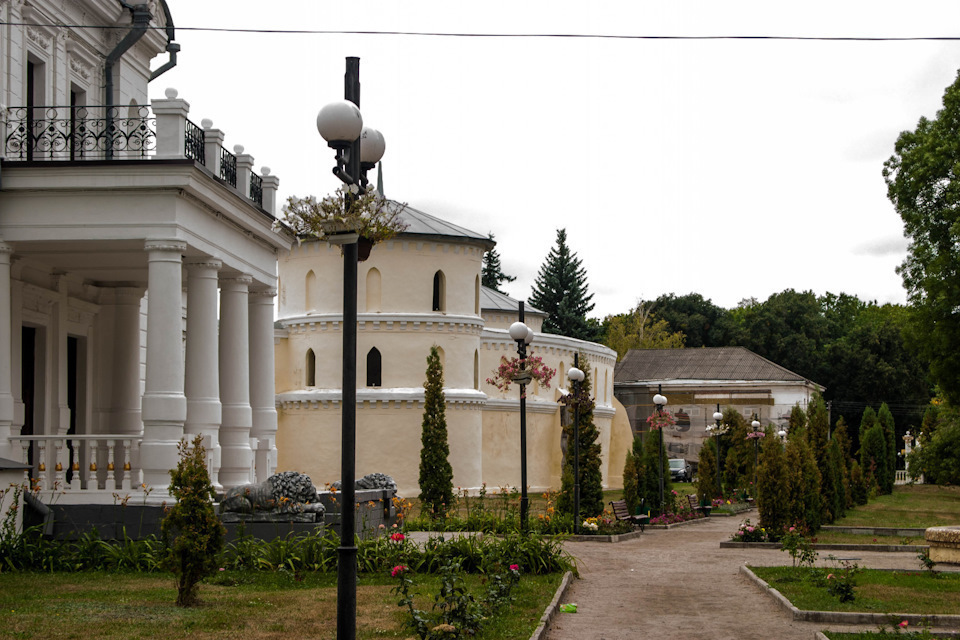 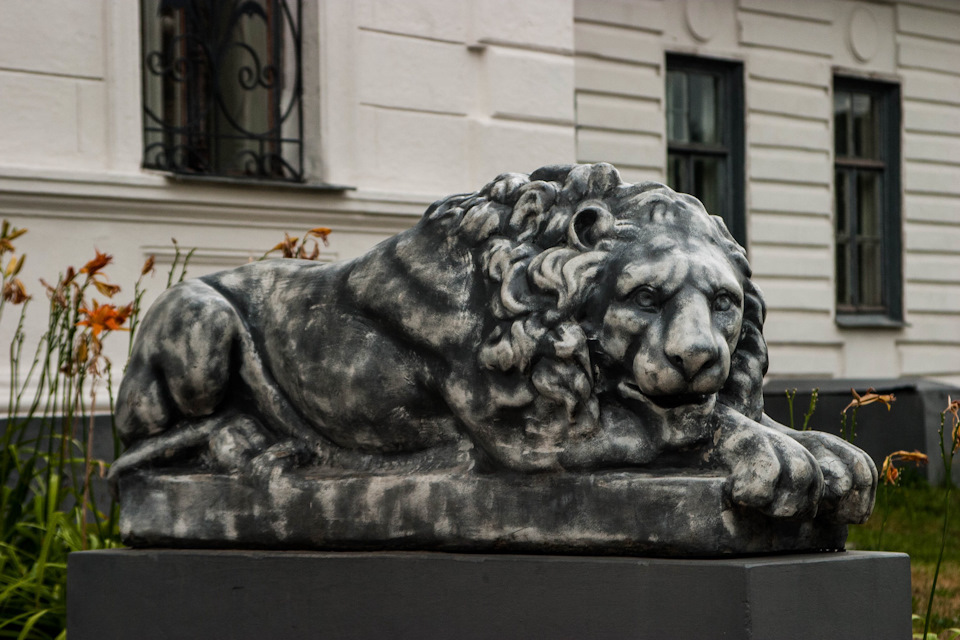 The next stop was Tokari village. There we had an opportunity to observe the remnants of the Gate Temple of All Saints, which had been sanctified back in 1760. It had previously belonged to Sumy Assumption male monastery (until it was abolished in 1788).
Surprisingly, this was the case when the remnants had left me absolutely untouched and not impressed whatsoever. 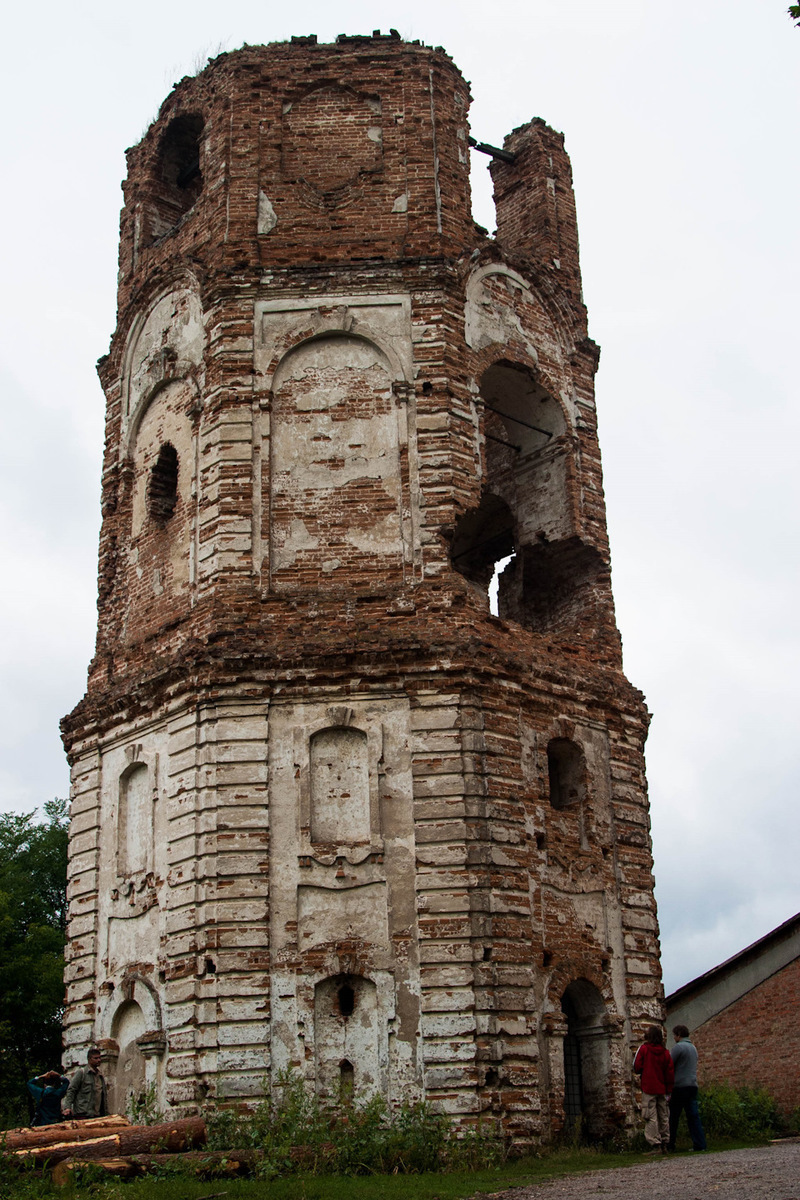 The next part of our program was Grunovka. The Saint Michael the Archangel Cathedral (1854) 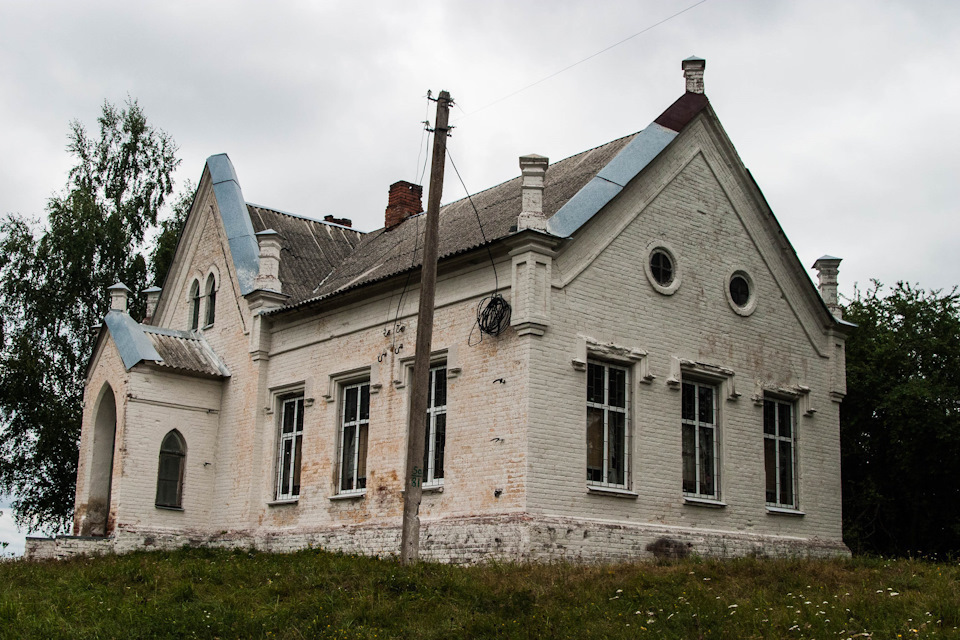 Personally, I was not really interested in the place itself, but everyone felt obliged to lay down: 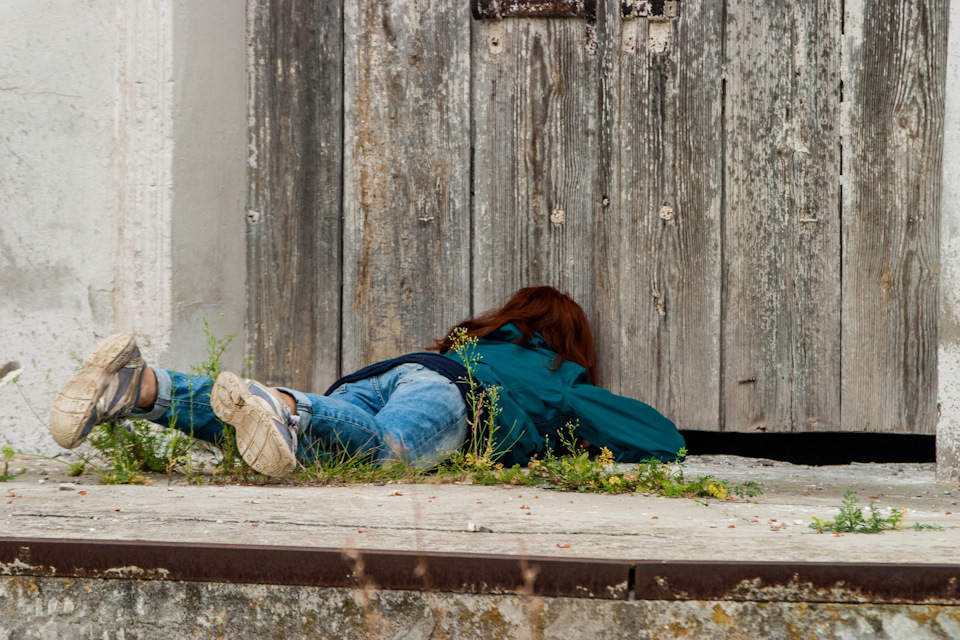 And the hill view was beautiful )
From there we moved to Mogrytsya. There was the Vladimir the Sainted Church (“which was built in XIX upon numerous peoples’ requests”)) But that happened a little later, first we stopped at quite a picturesque place))) 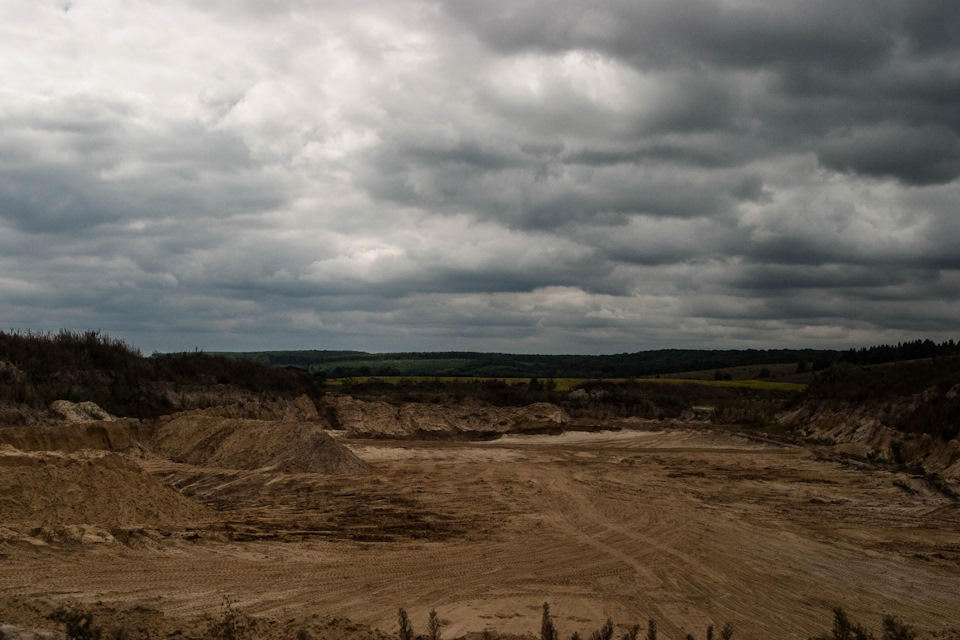 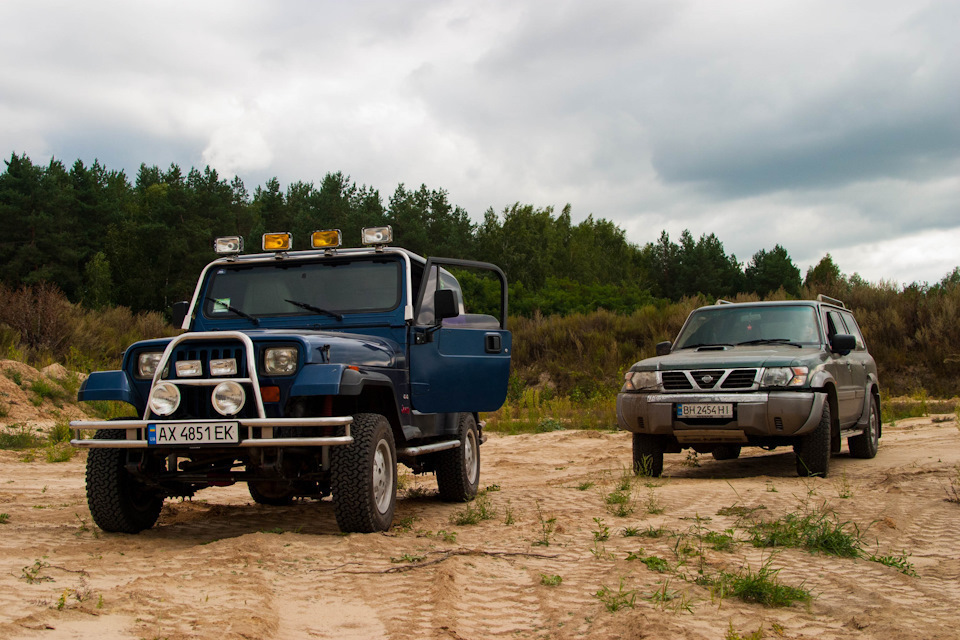 Boy, did we jump enough and circle in the sand over there)) And then the hunger took over us and we hurried to see the church, as we had earlier been promised that we would be allowed to eat afterward))))): 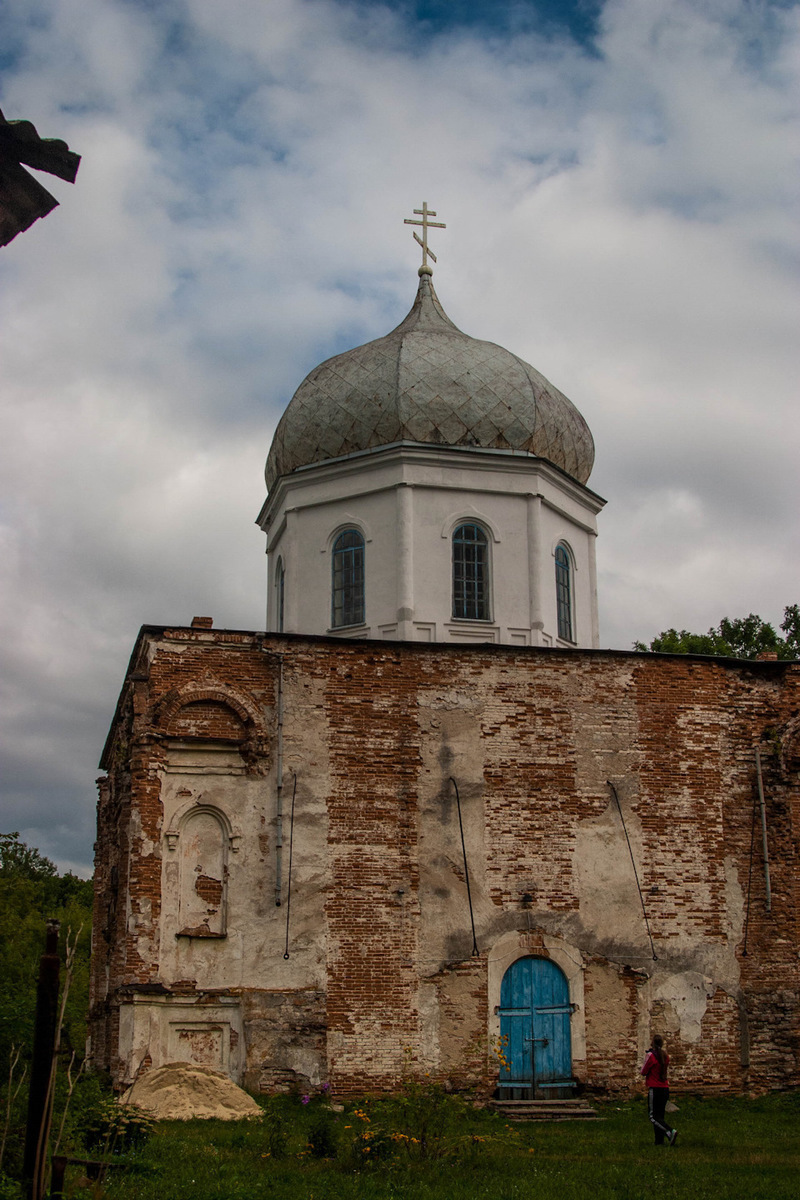 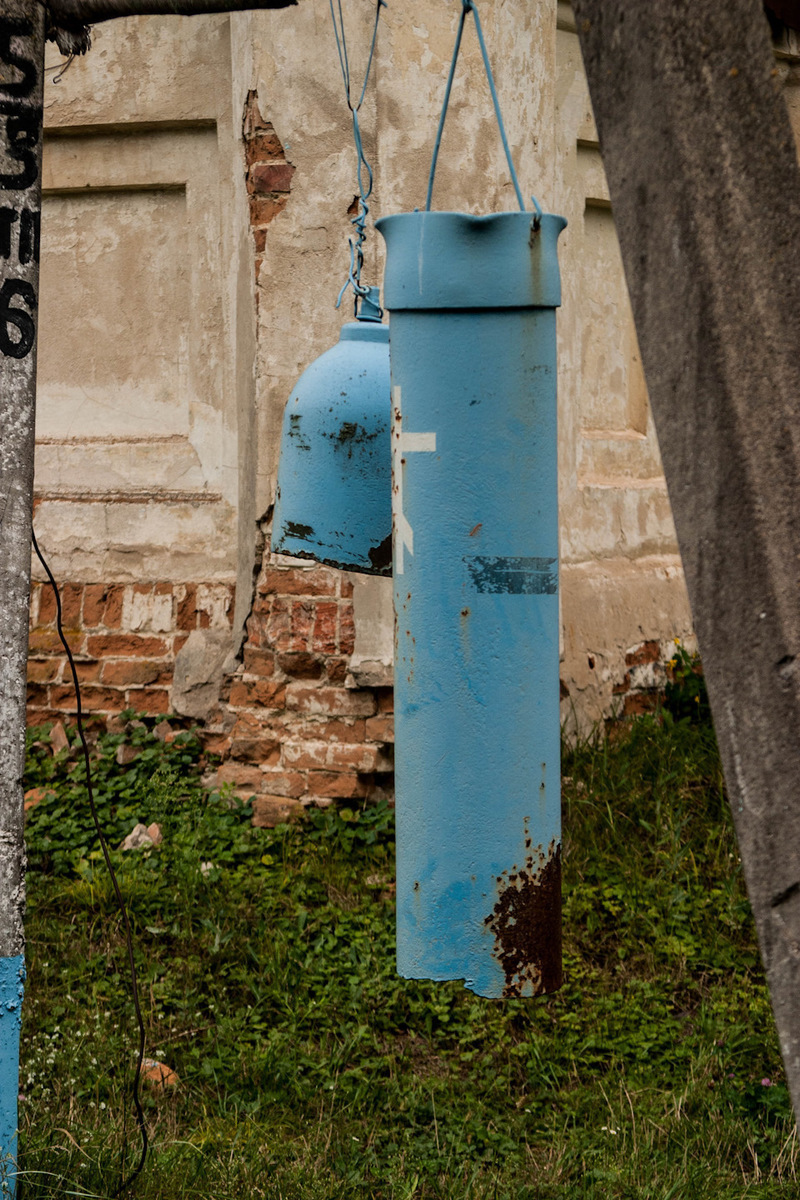 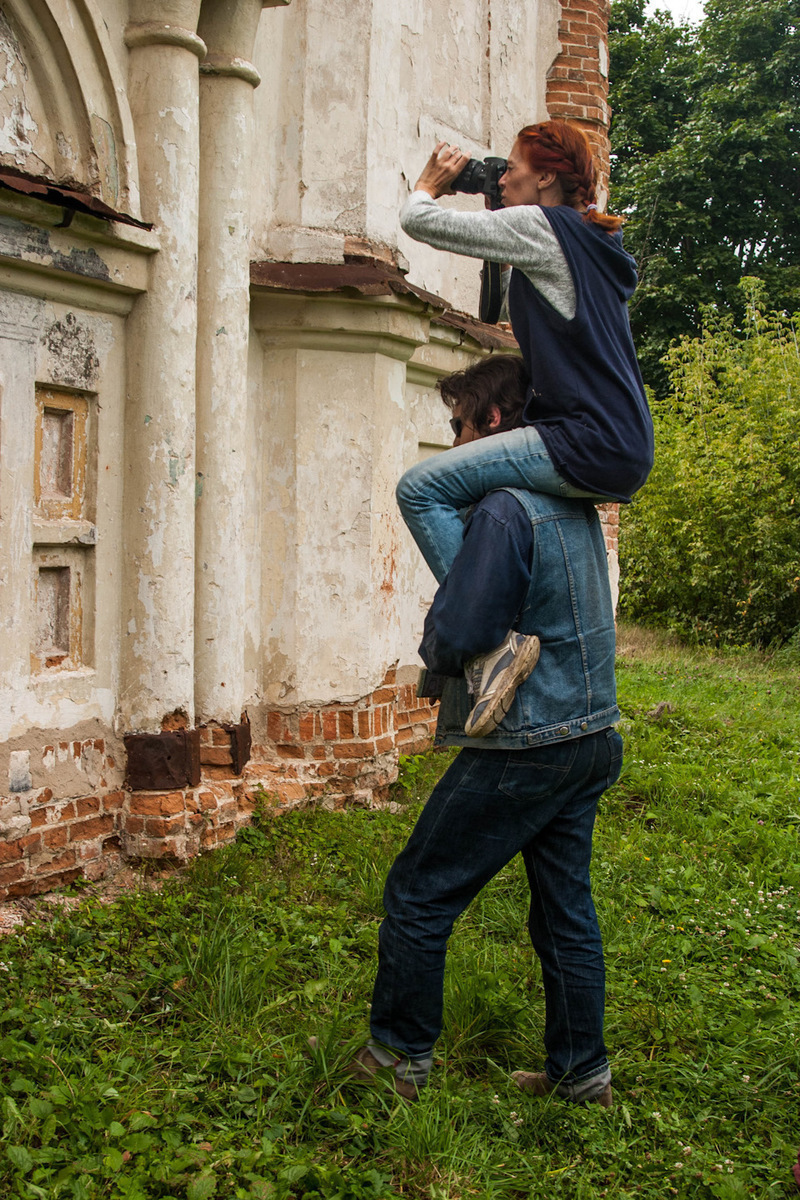 Our leader of the Brave Ones had promised us the beauty and the best picnic spot by the village and forced us to leave the store after buying some ice-creams))
And – it was definitely worth it! It was an unbelievably beautiful place! 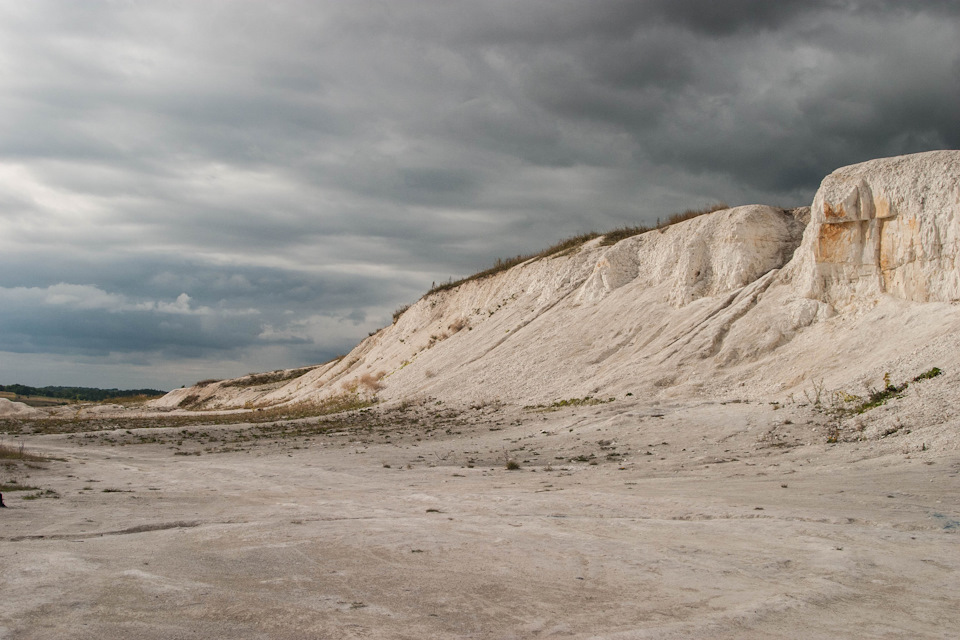 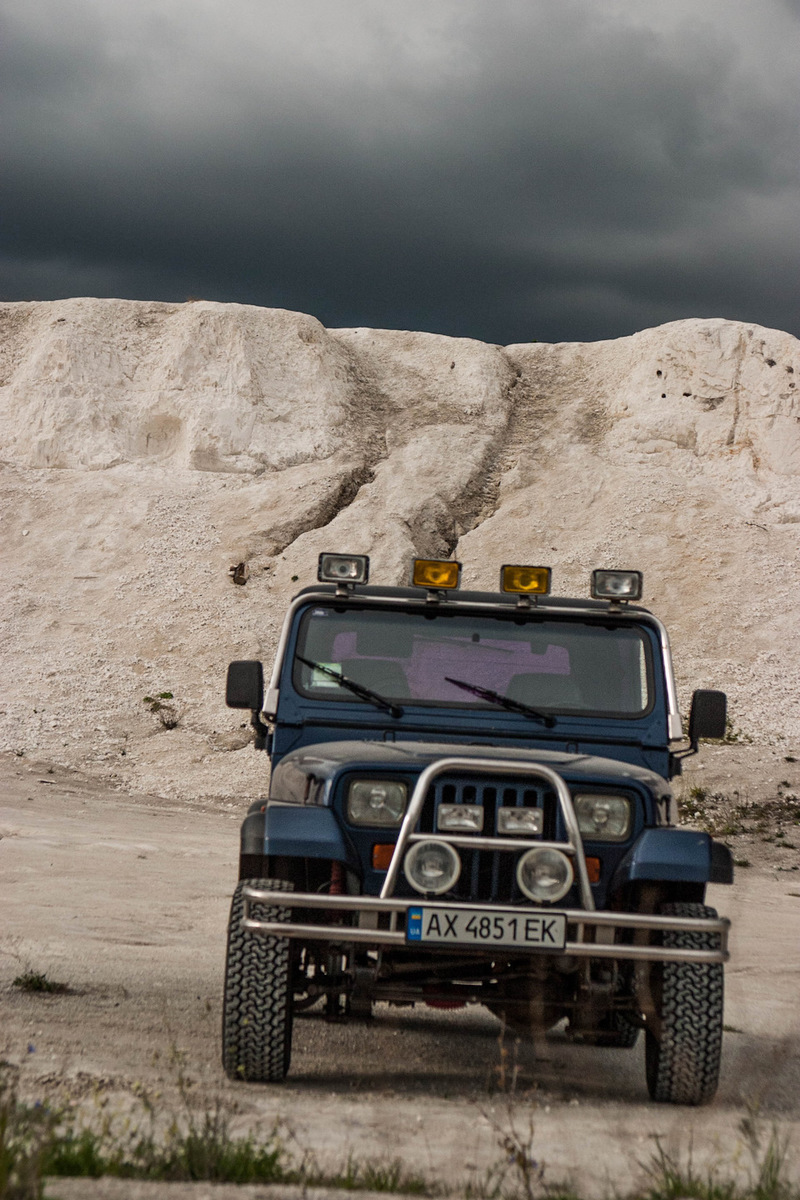 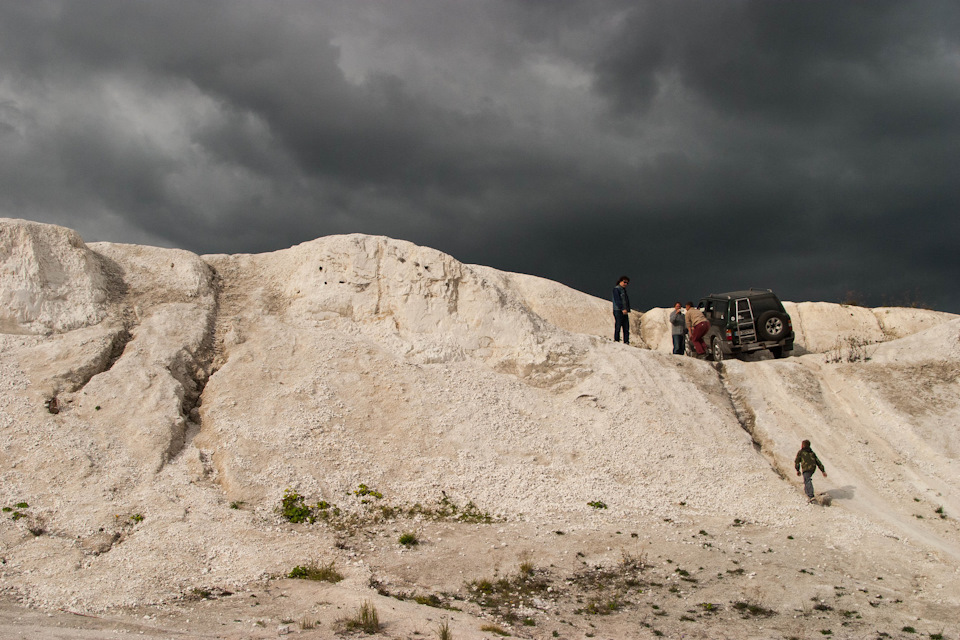 And what do you think? You are right! There was the hill – the scary, steep chalk hill! The Patrick was the first one to attempt it, he drove there, turned around and drove down:

And here it comes:

To be completely honest – it was incredibly scary! The photo and the video do not reflect the steepness to the full extent… It seemed to be more of a trampoline into the sky with the wall right behind the ridge… But I was driving down without turning around))) The chalk is yet another test for the nerves – it partially crumbles, makes one worry about not getting into the track, the car grunts…
But – everything worked out well eventually)). I was very satisfied with myself – the caterpillar from the old Soviet cartoon about the ant has been successfully overpowered! 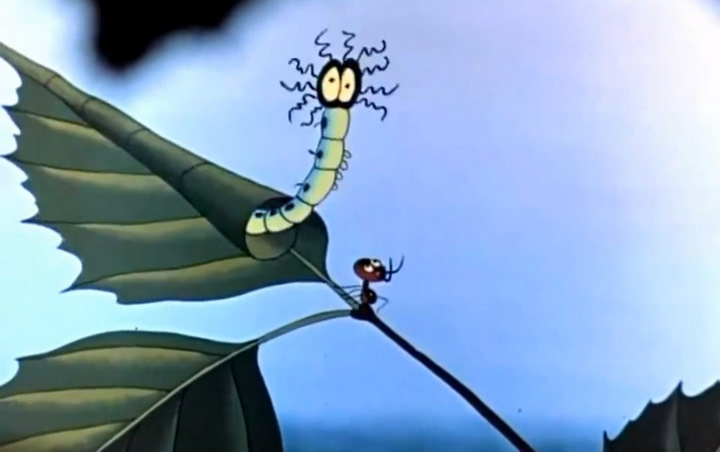 Actually, after finishing up all the maneuvers it did not seem as intimidating and scary in the end. I was just doing this for the first time))
The Patrick did not stop and did get to the very top:

And I took the camera and wandered around in order to calm the nerves down)). I made a mental note to come back there and to overcome the rest of the heights someday); not all at once, though)
While we were having fun, the rest of the group overcame the hill chain and found the place for a picnic. We drove down and around the chalk hill. But! Not everything was so simple). The Patrick crumbled over the hills, and I was silly enough to decide to drive around them near the foot of them)))). I had better tried it from the top)) The pits down there seized up to the top of my wheels, and they were lined up nearly as in chess, too! It was some sort of a disaster. I thought a little and turned the lowered one on simply to avoid over-pedaling the gas and damaging the engine. And there it was – my favourite car was jumping happily to the picnic spot.
As soon as the quadrupter video is ready, I will definitely post it up. The beauty was unbelievable)))
So we had some food, took a seat, had some fun and gathered back up) 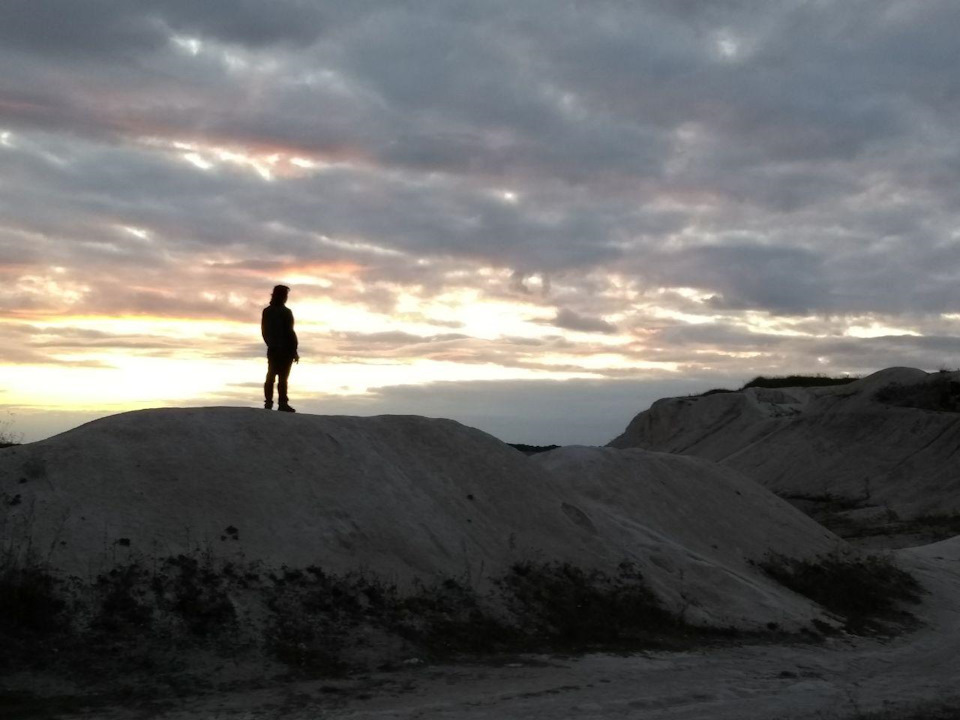 Everything would have been great if it wasn’t for our favourite “let’s take the shortcut” line. I’m telling you, this is something that should never be done! How many times we’ve gone through this!))) Alas!
And I was still the second one in the line and had no idea where we were going – except for the destination point, which was our home. But all the details like why we’re turning left or right remained a secret for me.
There was one thing that I enjoyed a lot – we went by Zapselje and Myropolje in the very beginning of this “short” way.
There happened to be a stunning old temple complex, both catholic and orthodox at the same territory. As the experts said “it was like a mini-copy of the Saint Peter’s Basilica in Rome”.
Interestingly, the only reason we stopped there was because my passenger began catching my hands and yelling “Stop! Stop! There’s a teeeemple there!”. The Patric didn’t notice our stop and continued moving. There was no connection and the walkie-talkie was dead as well.
It was dark already and the cameras couldn’t capture the beauty, despite all of the Hedgehog’s lights that I had turned on))
While I was preparing the illumination, and the people were spying around, the Patric made quite a way off, and the temple was approached by a car with a priest and some other people. It was a hilarious situation, as they thought we had been running away from them, because I turned the lights off and tried to make way for them, and the rest of the folks wandered behind the temple))). But everything got figured out soon)
The Patric returned with all of the experts and we received a chance to see everything more closely, listened to the short lecture on the history of the place and acquired a permission to come back in the daytime, as well as to visit the bell tower)))
And next was the trash road part again! Well, it was the expedition, so what could we say)))
We found ourselves on the sand road instead of an asphalted one… The surroundings included corn fields (the corn “walls” approaching as close as half a meter to the car), the dust clouds from the Patric, the night and the zero visibility. We moved literally “by touch” and could find our way by the dim vision of Patric’s lights only. I had been so incredibly tired by the moment, that I felt like I was about to doze off – I mean, come on, we’d just came back from the South, we hadn’t had almost any sleep, the adrenalin, the 20-hour ride… But – I did get out from that corn in the end, and I even didn’t lose either any Hedgehog’s parts or any of the passengers. However, as soon as we found the right direction, I asked Mr.Aubergine to grab the steering wheel. Well, what can I say? A person that is used to driving a sedan makes quite a picture while driving the Hedgehog. I felt nauseous after 5 minutes of these drunken rabbit’s jumps. The sleepiness was almost gone. He was drawing the knots from the one side of the road to another one, counting up all the pits on the way… That was when I realized just how terrible the Bohodykhiv highway must feel like while driving a sedan. Hardly it is possible to describe the depth of my tragedy.
I did manage to fall asleep after a few dozens of kilometers, and I woke up after coming back to Kharkiv.
We drove the passengers back to their homes and went back to sleep. It was about 3am again.
And in the morning I went back to the repairment place. But – that was an entirely new story 😉