Finally some energy was found for writing the report about the “1st Auto Grad Rallye” we held on September 23-23th.
Naturally, the rally itself was preceded by the prep process))) Running around buying stuff, visiting printing houses, negotiating, messaging…
To be honest, understanding and writing sports documentation was quite a thing to do) We even managed to get a bunch of volunteers, but that song is a separate one. I don’t want to seem politically incorrect, but those volunteers managed to deliver so many problems, that the thorns started moving….
Besides, the inventory provided by FAU was to be collected around the city – the signs, the walkie-talkies and such, things to order, to pick up, the cups, the stickers, the certificates, a bunch of documents, the legends, the print-outs and various equipment.
Writing out the route itself was worth a bunch as well)))
First, the route is planned with the map. Then, one takes a car with a tripmeter, a notebook, a pen and an android phone (with GPS, so that everything would match). And – the journey begins. In the beginning one flat sedan goes through the route and records everything. Then, another flat one – checks and corrects it. Then an interesting and not recorded piece of the road is being found)))). After, the same route is driven through in the mode that is the closest to a realistic one. For instance, I take the Hedgehog’s wheel, the Top Route Inventor takes the captain seat and we start off. But this time I have no idea which way we are going – everything is honest. 200 meters to the right… and this type of stuff – the time, the distance and the speed are being checked. And then a double check happens in some cases:

The second part catching up)

Altogether the route was about 300 km. Well, a bit less.

Before the rally – to be more specific, on Friday, September 22nd, we had a meet-up at the autodrome, where the headquarters and the special route parts were to be installed. There a very troublesome work was to be done. There came the first note about the volunteers – this was the first moment of their grand-appearance… But… There was only one boy. The next few lines has been censored)))) We unloaded all the equipment.
As usual, first all the trash was collected – our people seem to be unable to get their used bags, bottles and such to the trash can… And then we settled the wheels for the special stages – everyone loaded a full trailer, unloaded it near the necessary spot and then placed it in the places prescribed by the General Plan (the Top Special Stages Manager) )) After that, the team with a signal tape went and marked everything according to the plan mentioned above)) 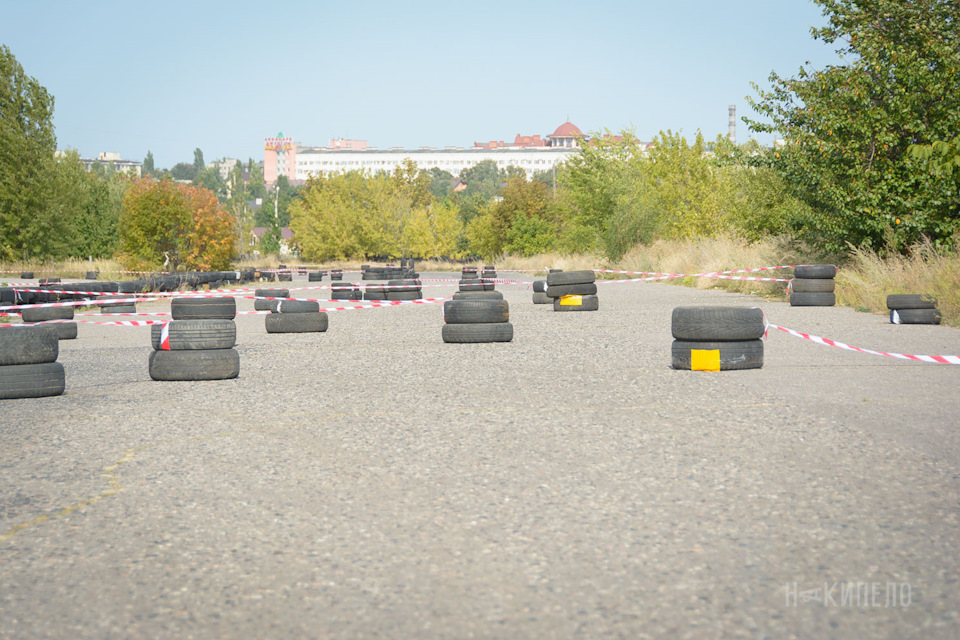 At the same time we’re preparing the stickers from the printing house. Naturally, a part of them is missing, but luckily, we figure it out on time. It’s good that there are some of the necessary ones from the previous rally, and they are undated.

The day of the start we get up at 5 – so that we at least manage to have some coffee)) Then we run to pack everything we didn’t risk leaving at the Avtograd for the night – the equipment, the documents, the food, etc. A prompt unfolding the headquarters is done. The tent is big and comfy this time)) but it has a big windage (the second day we had to catch it and tape it to the closest vertical… anything due to the strong wind). 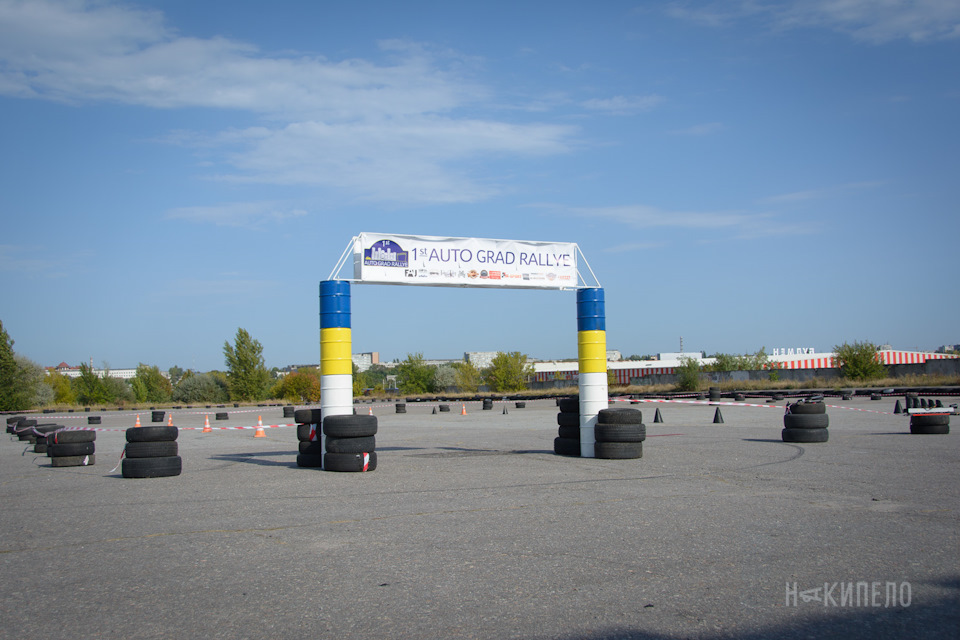 People start to come – the marshals, the judges, the VOLUNTEERS! (sorry). Everyone are to be counted, written in, checked – the badge, the signal vest). The volunteers happened to be a stock of 15-year olds under the command of a Wonder-diva, 18 years of age – with all the consecutive results. We were very happy to see a few guys from some college (I don’t remember the exact name of it – it’s about design and architecture) – now, they were really a great help! 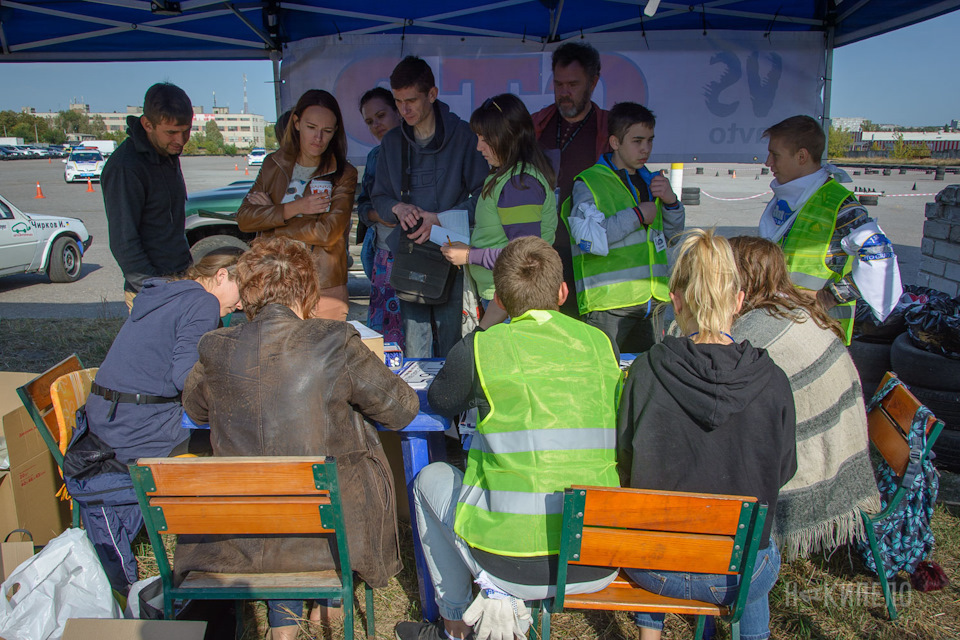 The participants start coming little by little. We count them, write down, check… And we have 10 teams. Out of the registered list of 17. And some of those who did come were not previously registered. That is, some people went through a registration process, took a starting number, which I ordered for print, and then – quietly (except two of them) decided not to show up… This situation (IMHO – a display of the not serious attitude towards our work and the event) – has resulted in a pre-paid concept of the registration process for the future events. I’m not even talking about the fact that we ordered food, water, road books and everything else for them. I was upset about it a lot.
There was an interesting situation with the participants – there were very different people at the rally – both star pilots and navigators and total newies, instructors, retro-car drivers, trophy folks and other sportsmen. But, as we promised, a tricky route has equalised the chances)))) There will be info about the results – later)) 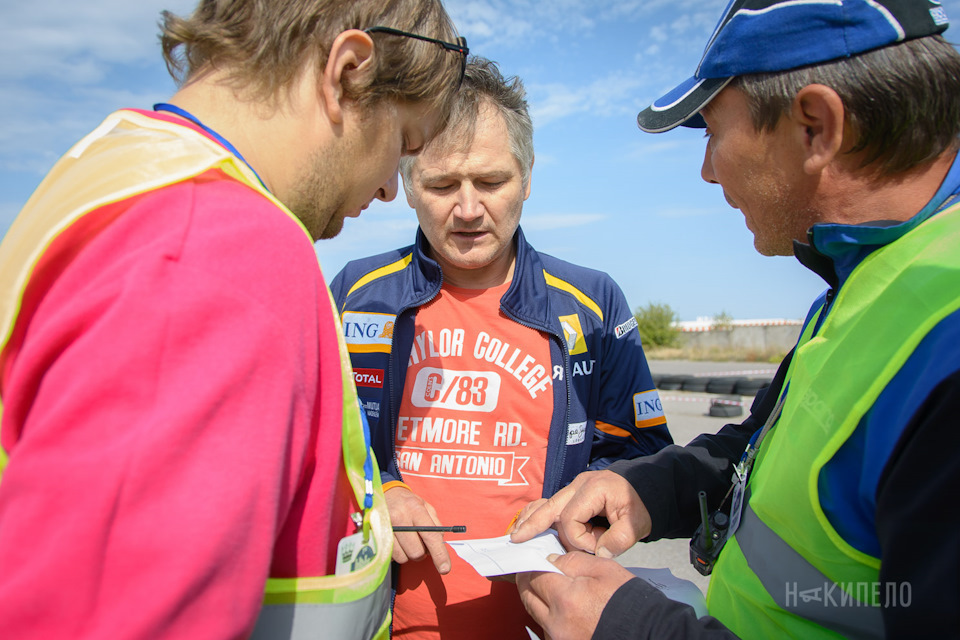 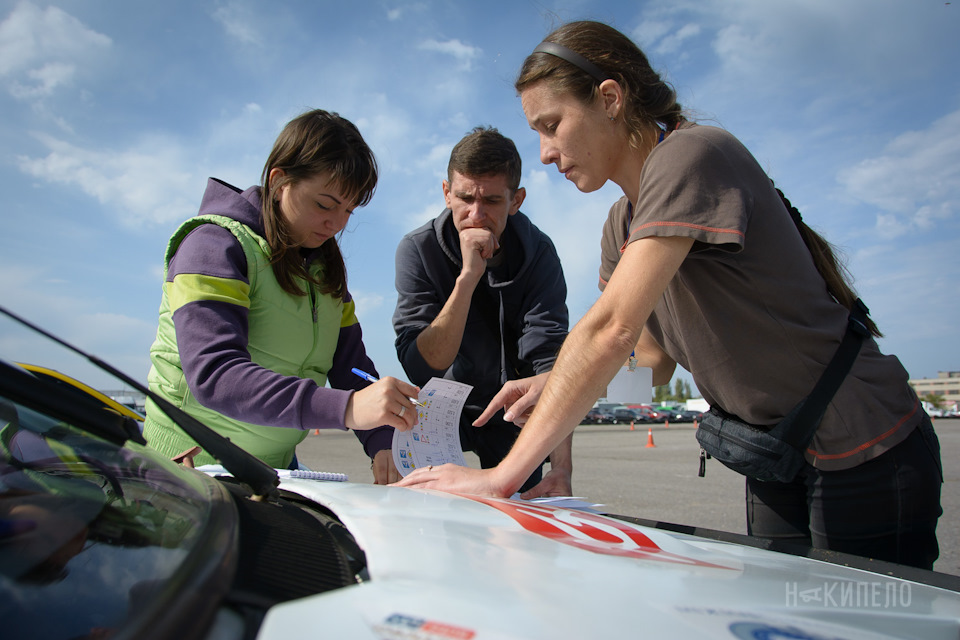 We also had some guests 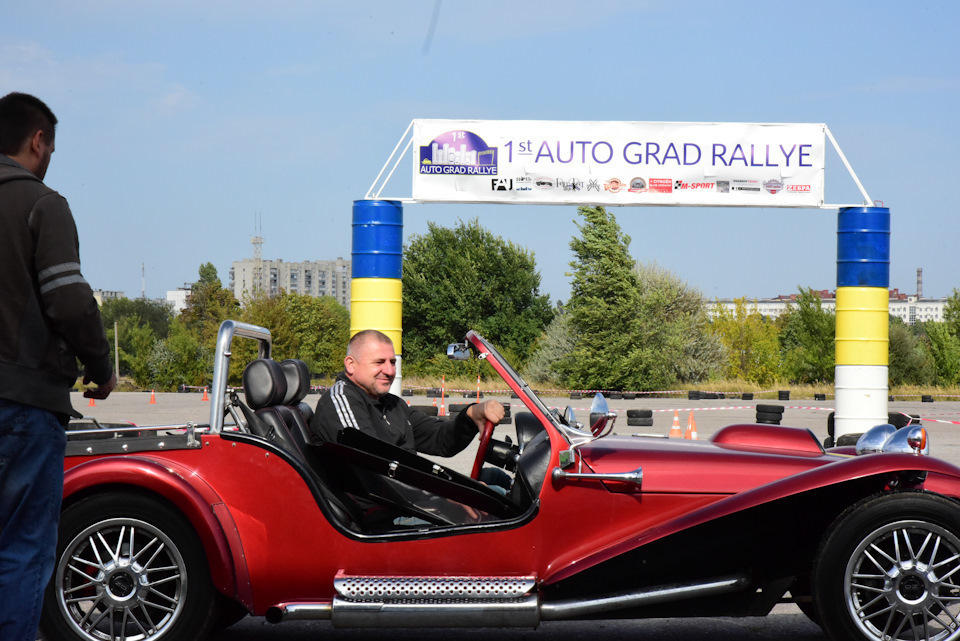 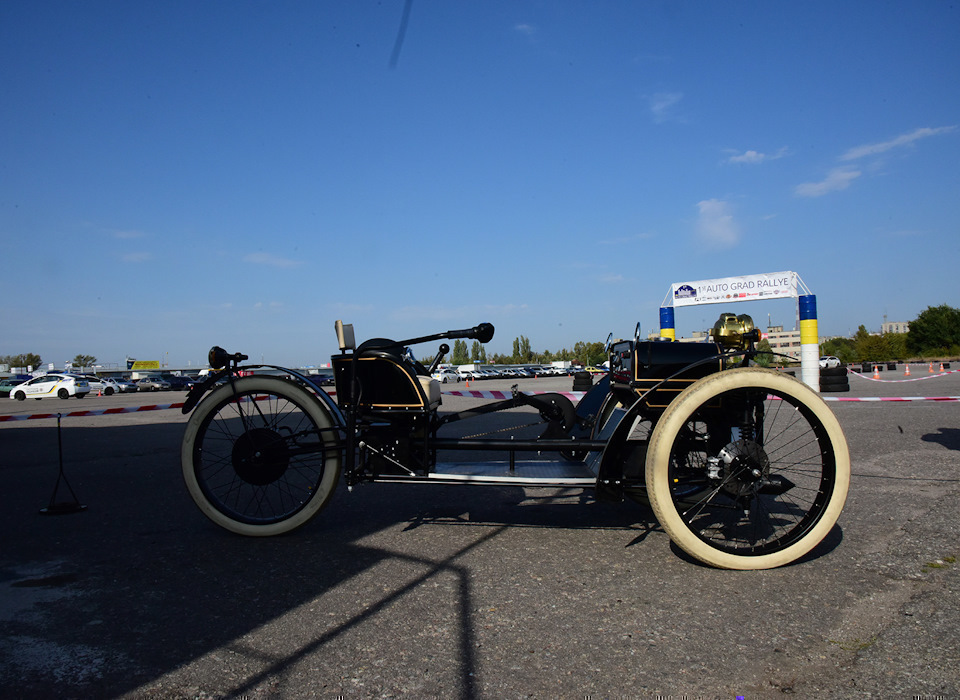 The instructions are given, the papers are signed, everything is checked and registered. 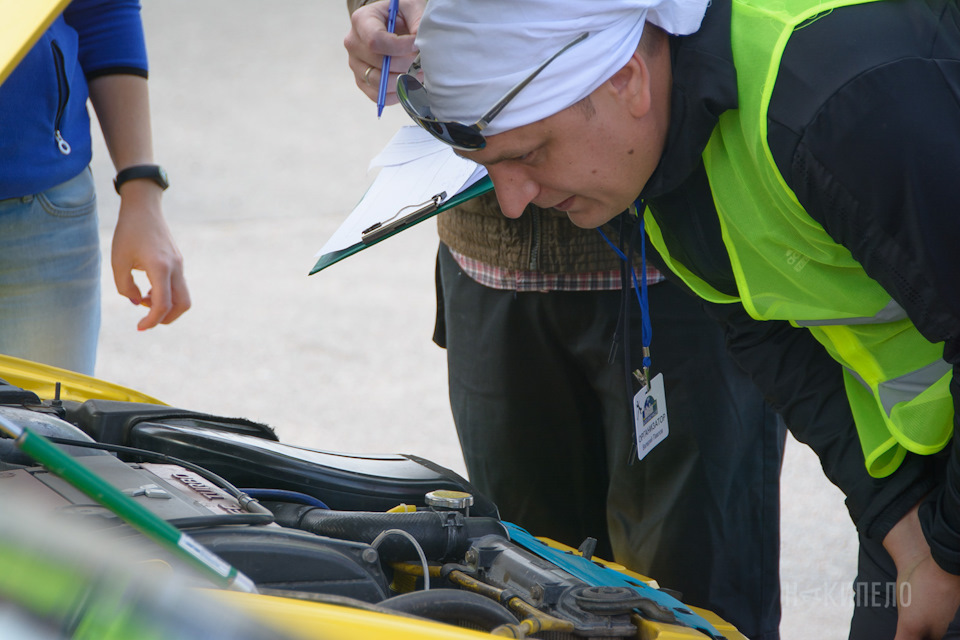 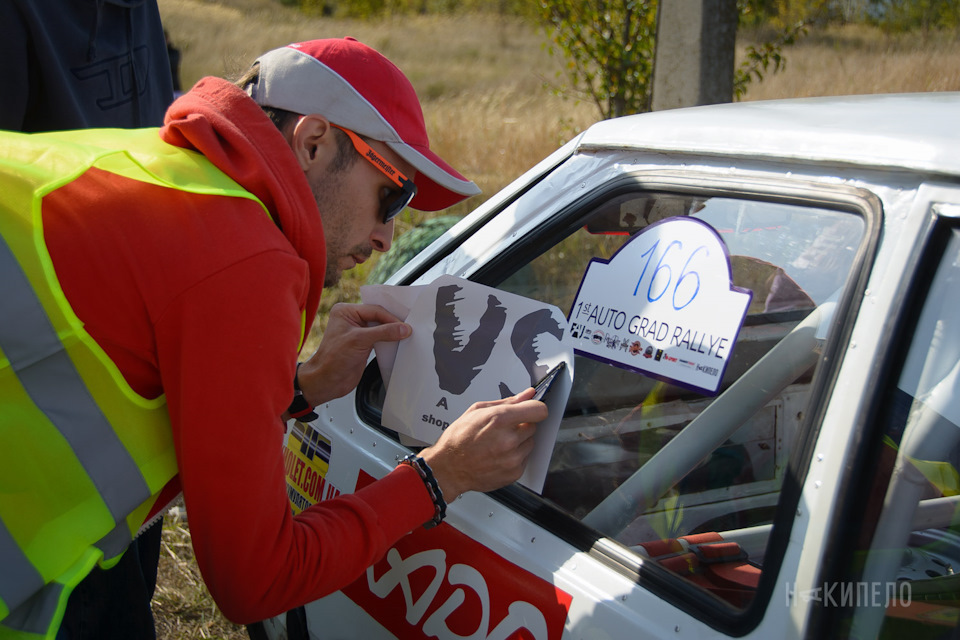 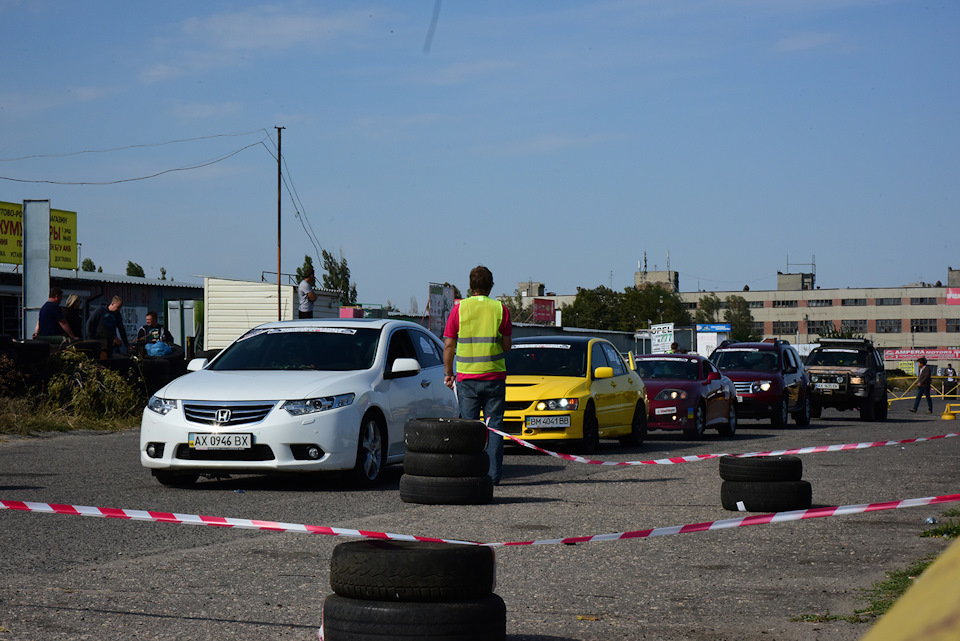 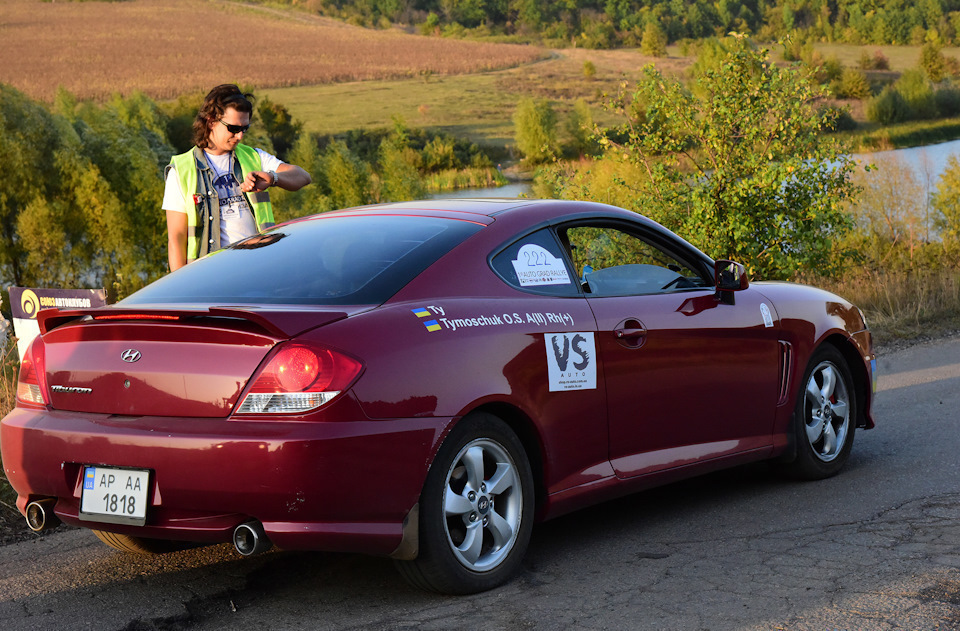 One of the control points

To summarise, there were 9 special stages of three kinds. Two of them took place at the autodrome, and one was in the city (in the suburbs). We decided that it was necessary to remember about a very interesting thing such as RM – a special stage for the regularity of movement. This means that every team receives a personal average speed that is supposed to be kept to while going through the stage – and we’re talking about ‘the fields’ part of it, not the autodrome one)).
I have to tell you that the previous time the participants were obviously very bored – they calmly finished the stage and took their time to rest. This time we did our best to complicate the task))) And we managed to do this)))) No one was bored, definitely) 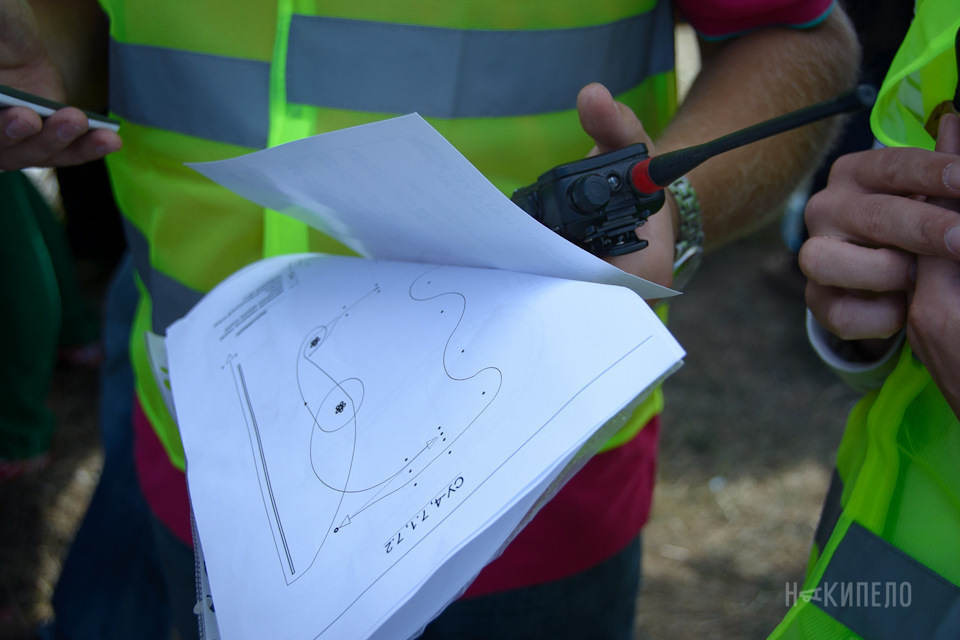 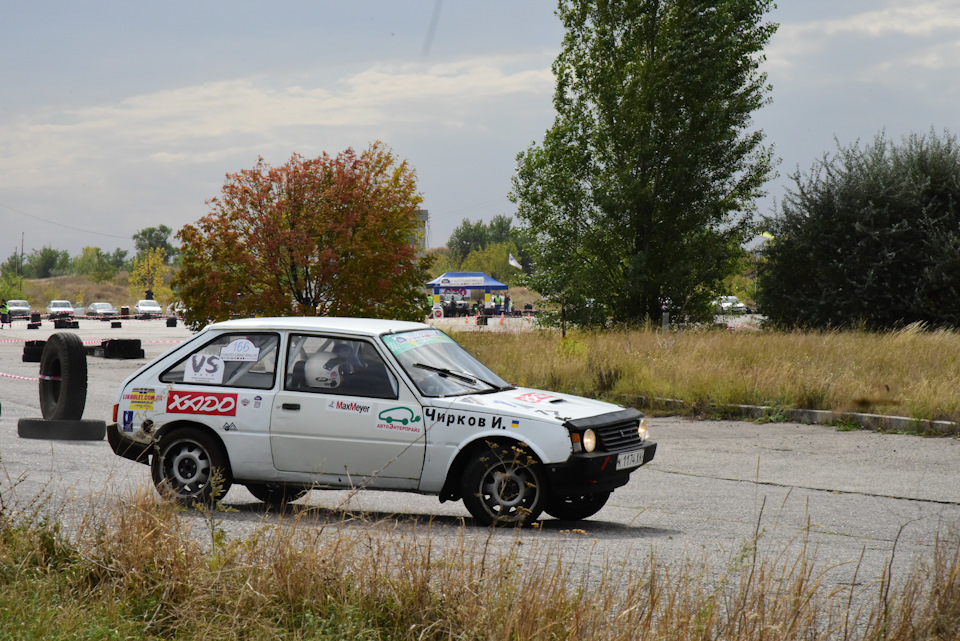 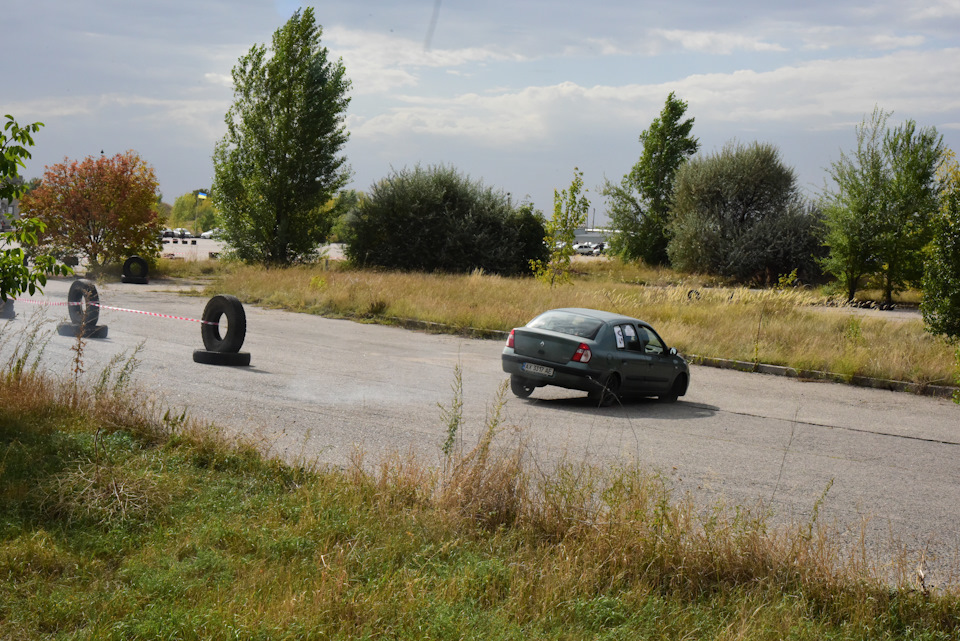 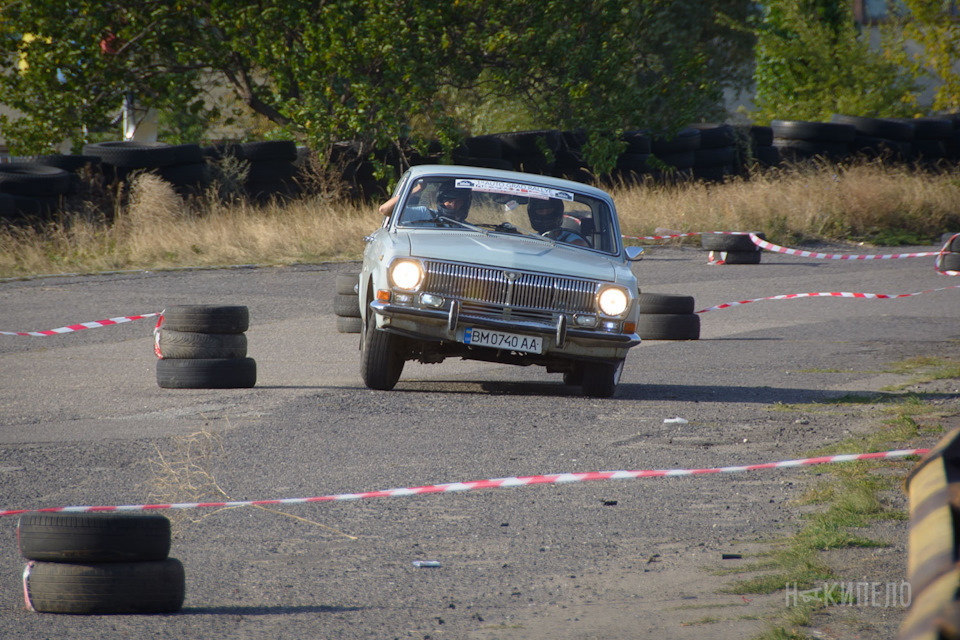 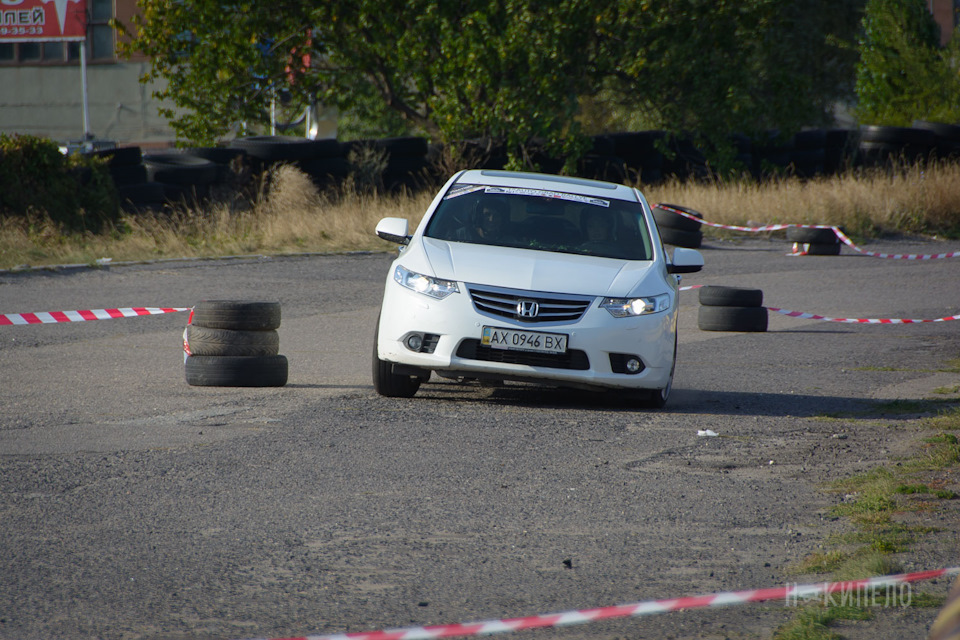 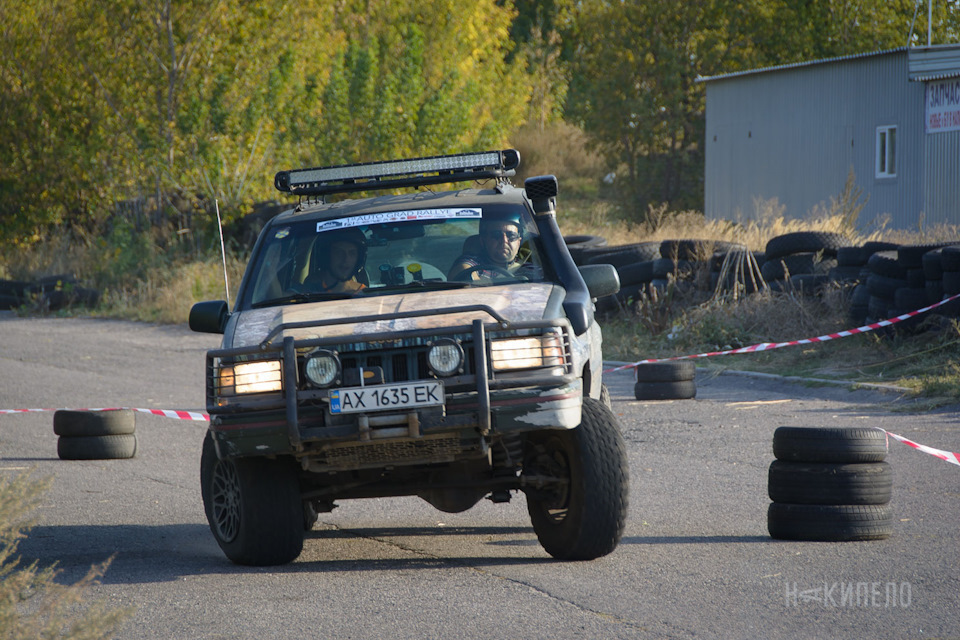 A bit more photos here))
The first day finished with a mutual kulish degustation, made by the Brilliant Cook! 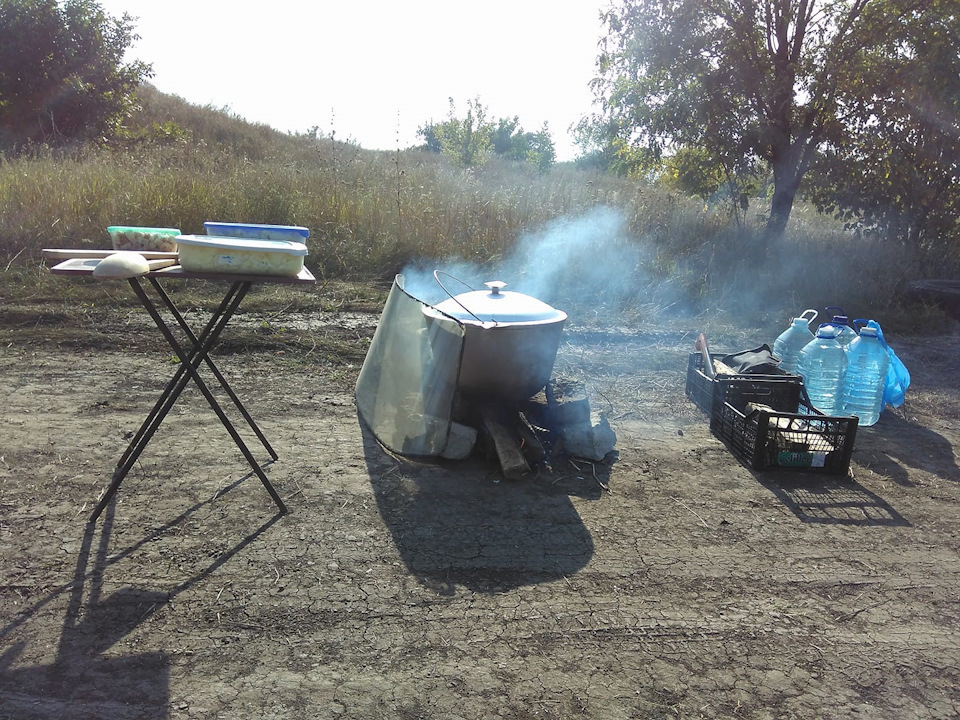 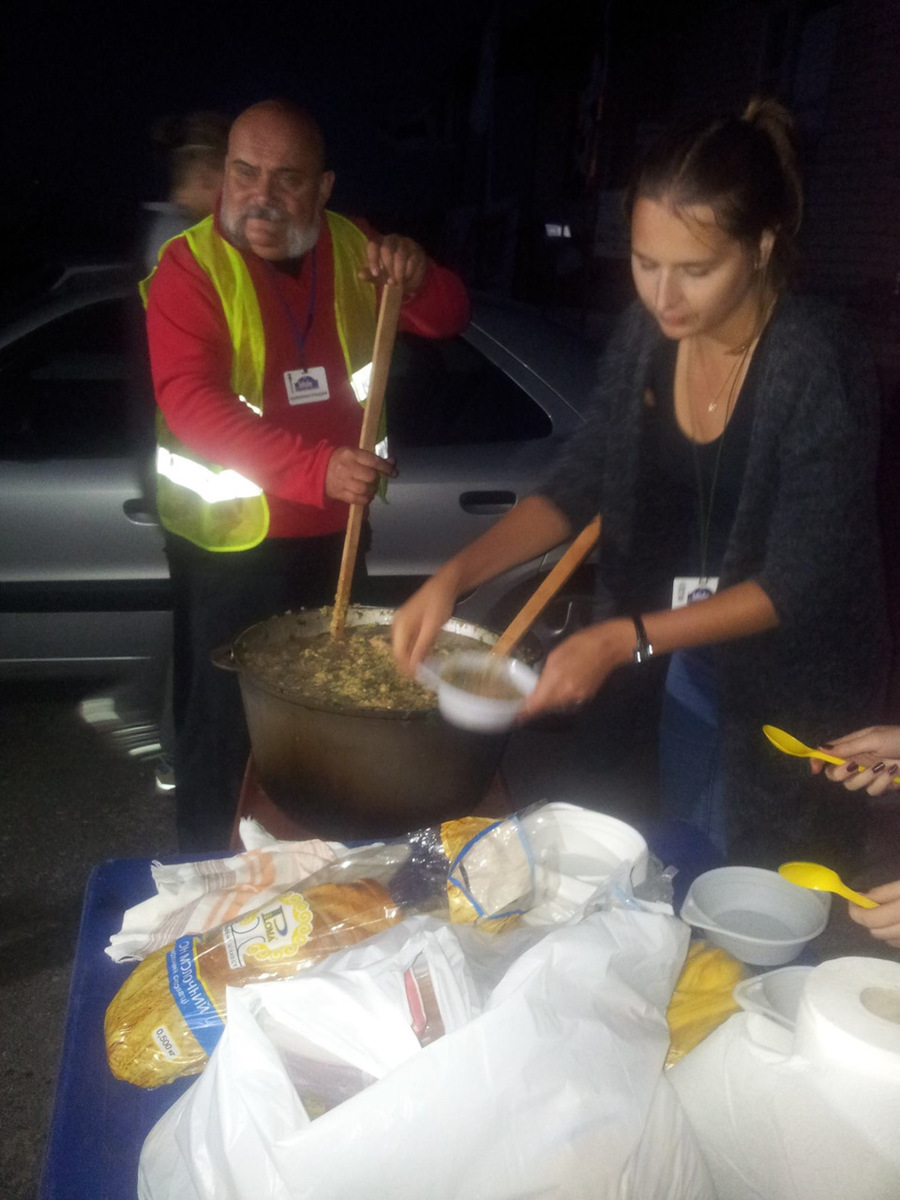 Giving out the tasty stuff

The second day we waited for everyone who registered for slalom only…to no avail. \censorship\
All of our participants went through the med.commission, received the day 2 legends and continued the race; more special stages, the city and such… Some of the teams got lost, then found their way back… One of the teams had to stop due to the technical reasons.
The last slalom was counted as a separate stage. The participants took it twice, and only the best score counted. The tension grew and the difference in results was dramatically measured in tenths and hundredths)))
Later, the result counting began. Taking into the consideration the fact that everyone had a lot of penalties, the navigators tried to write a reasonable amount of requests, pilots argued for every second, – so the count-up took a bit longer than we’d expected))) As a result, the winners changed a few times and some of them (naturally) got upset, and some became very happy. But I am sure there is nothing to argue about in the count-up. I took some time to observe the process. Some of the penalties were taken off, some remained, but the process was performed without fear or favor. I am amazed by the patience and the temperance of our Counting Manager! He had to hear everyone up, to calm them down, to discuss, to consider, repeat it all again and again…))) and to make the most objective decision.
And then – congratulating the winners!
We heartily thank everyone who had helped us, our partners and the sponsor, who had provided the presents for the winners! 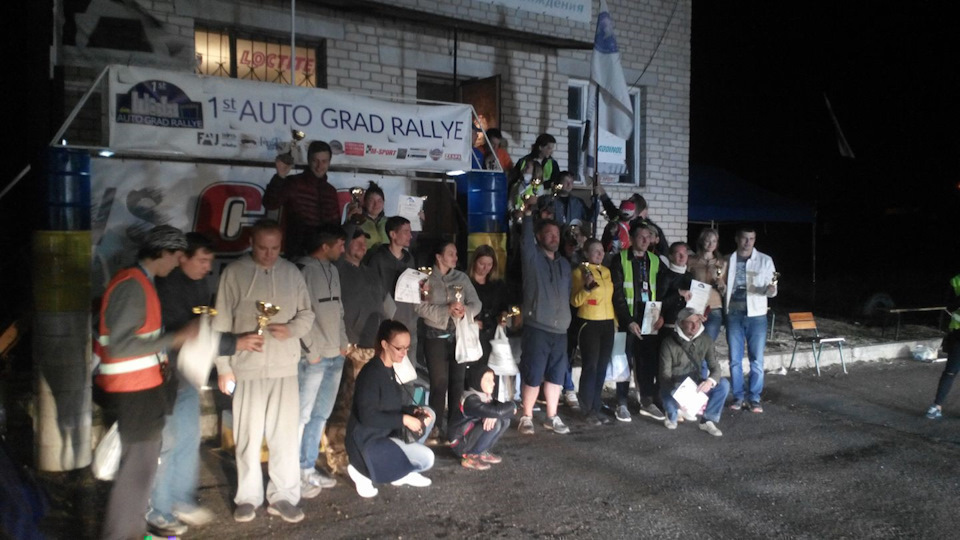 Besides the regular nominations, there were two additional ones – the Viewers’ Choice and The Best Navigator.The viewers’ warm feelings were given to the Jeep Grand Cherokee team, and the Best Navigator title went to Yarovenko Arina due to the smallest amount of penalties. We asked the Counting Manager to make a general count-up, too. The best results were made by Ford Focus, the second ones were taken by GAS 24 (!), followed by Honda Accord. It is difficult to comment))

After all the fun we took the route stages apart, gathered and threw away the trash… Packed up the headquarters, the arch, the equipment, the banners… And we were home before 2am))
Then the photo processing followed, along with the active social activity connected with posting and describing the photos. Many thanks to our partners for the article, and the great video:


We’ll wait for everyone in 2018! We’ve got more surprises scheduled!))))
TAGS
RELATED POSTS