Church of the Intercession of the Holy Mother of God, Sutkovtsy.

In the historical chronicles Sutkovtsy are first mentioned in 1407 in the diploma of the Lithuanian prince Vitovt, by which he gave the town of Yarmolintsy together with adjacent villages to Khotku Croat (originally from Hungary) for their faithful service. Subsequently, Sutkovtsy passed to Croat’s grandson Fyodor, who became the first of the Sutkovetsky family. Fedor began building the castle in the first half of the 15th century, as one of the defense points on the path of the Tatar Kuchman route. Initially, the temple was also built as just a fortification. Sutkovetsky owned the village until 1593. The last man of this family was Ivan Sutkovetsky, on whom the Sutkowski family had stopped; Ivan’s daughter, Varvara, inherited the village and brought it as the dowry to her husband, Alexander Balaban, the headman of Vinnitsa, who, in 1623, built a castle on the mountain, the ruins of which still exist today. Balabany family owned the village until the end of the XVII century, then it passed to the Grabyanka family. The most notable of them was Count Sutkovetsky Faddey (Tadey / Tadeusz) Grabyanka.
Faddey Grabyanka in Sutkovtsy hosted Giuseppe Balsamo (Count Cagliostro). At the request of Grabyanka, he developed the ritual of the “Invincible Scythian Sun” for the future Ukrainian masonic lodges. Count Sutkovetsky was going to start restoring the Polish-Lithuanian Commonwealth, grouped from Poland and Ukraine on the equal rights (the project “Republic of Light”). Then he dreamed of creating a global mega-empire, which, besides the Poland and Ukraine, should include all the lands of the former Byzantium (in particular, Palestine and northern Africa). It is assumed that this hobby brought Faddey Grabyanka to arrest. 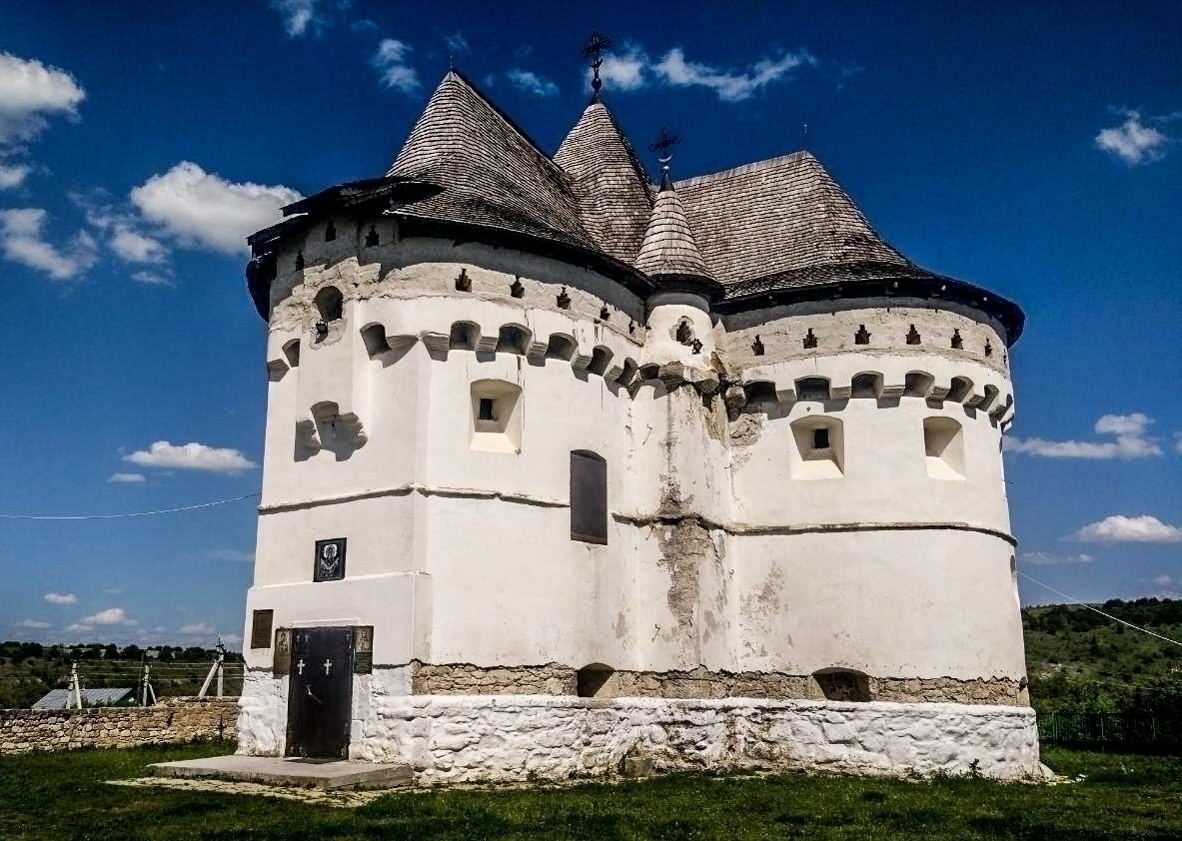 Already at the entrance to the village, the meaning of the toponym becomes clear. In this area you can hear the word “sutky” The passage between the hills and slopes is called like this here. There are many of these “sutky” here, hence the name.

The church in Sutkovtsy was built in 1476. The building has two floors. The temple itself is on the first, and the second, with loopholes around the perimeter, was used as a tactical.
The walls of the temple are made from stone, 1.5-1.6 m thick.
The overlaps above the first tier are a system of cross and conchs vaults with strips on ribs, made from bricks. In the central space they rest on a pillar, forming fan tufts of ribs in its corners; in semicircles separated by arches from the central space, some sort of a star-shaped vault. The stairs to the second floor are intra-wall, made from stone. The facades were first covered with an ocher-colored grout mixed with crushed brick. On the second tier, loopholes- machicolation were preserved (for fighting with people down the wall), the central machicolation above the entrance, the lower part of the pillar, that rose from the basement tier and supported the hipped roof.

In terms of planning, the Pokrovskaya Church of the Intercession refers to a rather rare for Ukraine, tetrakonhu – the square center and adjacent to it, like petals, four semicircular apses (conchs): 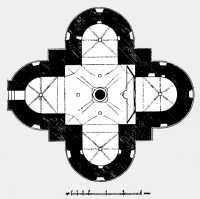 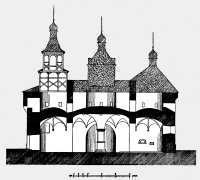 In the Middle Ages, such temples were fairly common in Byzantium, Georgia and Armenia. But the combination of “tetrakonhovosti” with the defense function – this is an extraordinary thing. The analogue can be seen only in the French city of Etampes, where the donjon of the local castle has survived till our days. But to be true, it did not become a temple. As in Etampes, the Sutkovetsky fortification during the “church” period also played the role of the donjon.

During the last century and a half, the temple was rebuilt three times.
Until 2008, the pseudo-Russian style bell tower stood above the entrance, stone below, wooden on top, erected in the 2nd half of the 18th century. In 1894, the building was reconstructed with disassembly of the forceps, after which it lost the ancient Gothic and Baroque forms and acquired features typical of diocesan churches common in the Russian Empire.
The temple changed its view to the pseudo-Russian during the reconstruction of 1903, then the shingle medieval roof was lost, instead of which the pseudo-Russian dome was built on.
Since the second half of the twentieth century a “black stripe” started for a temple. During those days there was another aggravation of militant atheism in the USSR, and for the church that meant a death sentence. Fortunately, historians have managed to repel this attack. Then, at the independence, in the 1990s, local residents made “repairs” on their own, as a result, the church was plastered outside and inside with cement mortar, which resulted in waterlogging of the walls and the loss of most of the fresco painting. The frescoes dated back to the 16th century were partially preserved under the cement plaster, the remains of 19th century oil painting stayed above them.
During the restoration of 2008-2010 the temple roof was covered by shingle instead of tin. The third tier of loopholes was built (meaning loopholes in the form of stepped triangles). The frescoes were cleared of a cement layer. What is bad, the builders closed up the ventilation holes, laid in the walls. In winter, when it is cold, and there are a lot of people in the temple, water drips from the ceiling. From the constant moisture fungus wound up in the floor. The floor very unpleasantly bends under your feet in some places. In the process of restoration, an underground crypt, completely filled with mixed human skeletons, was opened in the basement. The bones and skulls are folded into a huge coffin, which now just waits for the research funds to appear. It is still unknown who these people were and when they died.
At the base of the central pillar of the temple stands the gravestone of a some Gavrila Bulazen. Nobody knows who this is and why he had such an honor. The gravestone of the last of the Sutkovskys, Ivan Dakhnovich (died 1593) preserved in the church, and the gravestone of Alexander Balaban (died 1646) also was there; In the 19th century, the Polish historian Przhezdzetsky saw it, but now it is unknown where it is. The gospel with the inscription of 1639 is kept in the church.
During the basements clearing, a route to the underground passage that connected the fortified church with the castle was found. Locals, however, claim that there were routes to Kamyanets-Podilsky, Hotin and Medzhybizh here.
There are two types of loopholes on the combat tier. Some of them are for long-range shooting, others are for beating enemies that were already under the walls, the embrasures are suitable for bows. 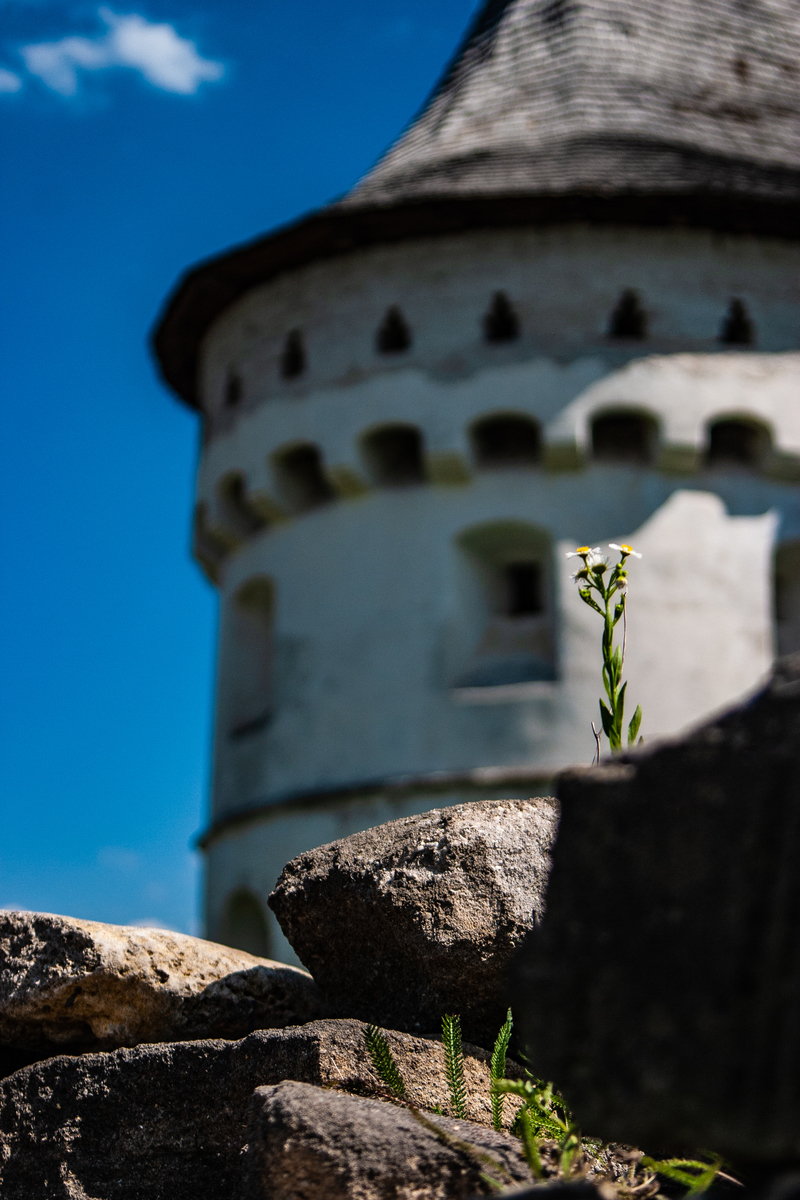