Slavgorod. Temple of the Holy Trinity.

Availability: Not available for visits, Bad road (during any weather, can be driven by two-wheel drive cars)

Initially it was a fortified place inhabited by boyar children, gunners and archers. In 1686, the Akhtyr Colonel Ivan Perekrestov bought Slavgorod from the boyar children of the Volnovo Service and settled it with “Cherkasy”. 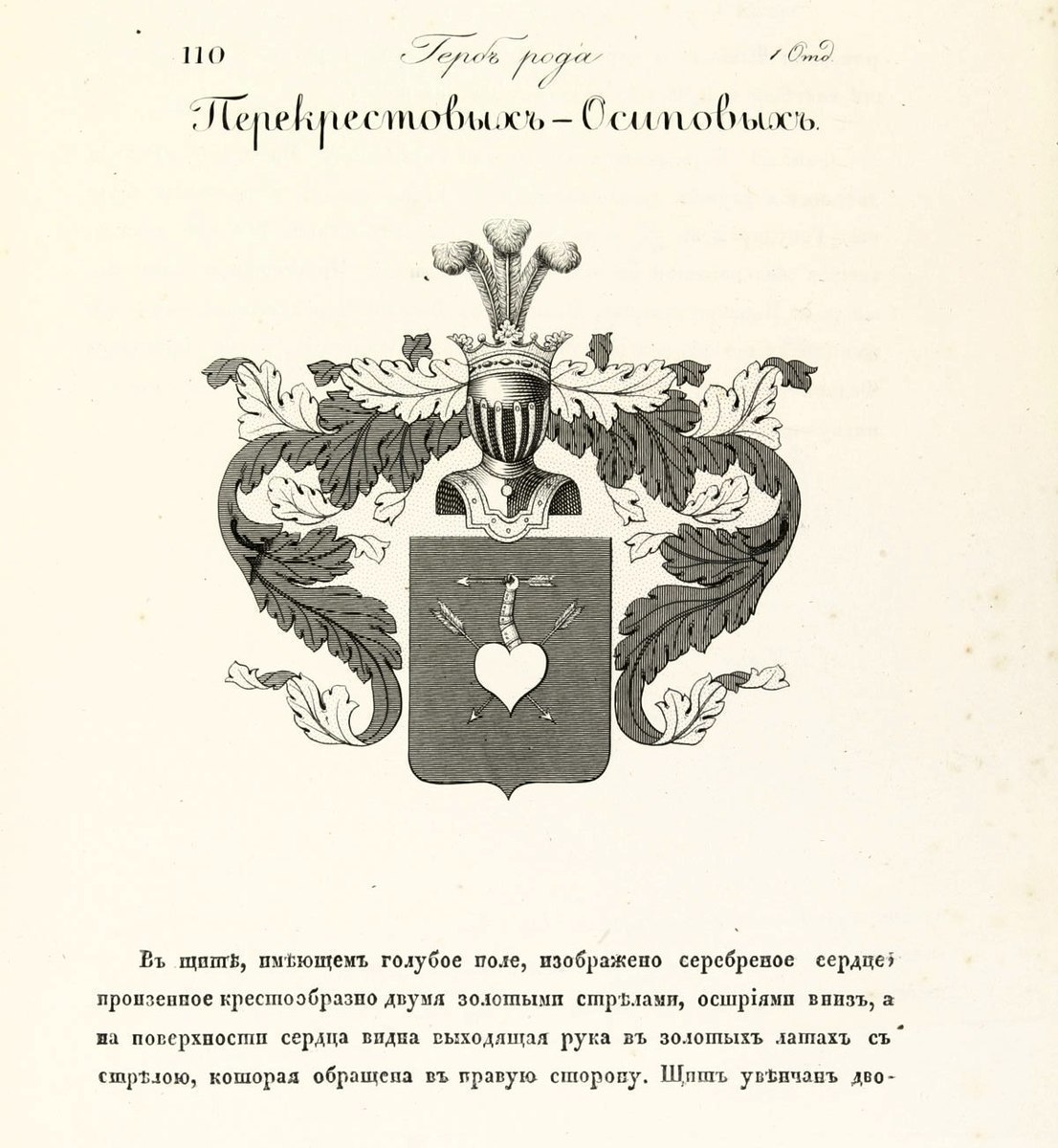 However, in 1704, because of his greed and the oppression of the Cossacks, he fell into disgrace.
At the highest order of Peter the First, he was removed from the colonel’s order, and the vast and rich estates of Perekrestov were taken away and transferred to the treasury.
It should be noted that the colonels and centurions of the Slobodsky regiments at that time really did not show the ideal behavior. Their struggle for power, denunciations of each other, corruption schemes, etc., are beautifully and in detail described in the book by Vladimir Masliychuk “Cossack petty officer of the Slobodsky regiments of the second half of XVII century. – the first third of the XVIII century.” 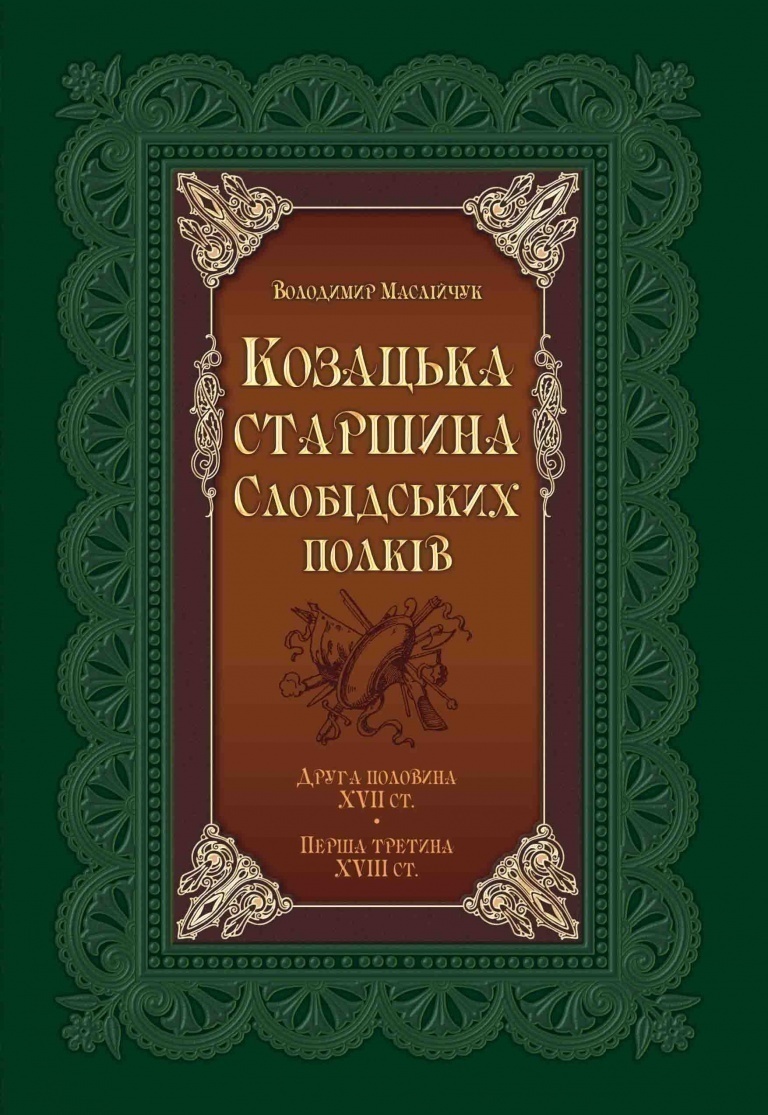 In 1720, Slavgorod, among other former possessions of Perekrestov, was granted by Peter the First to his confessor Timofey Vasilyevich Nadarzhinsky.
Until the end of the 18th century, four temples existed in Slavgorod:
1) St. Nicholas;
2) Trinity;
3) Archangel;
4) Vvedensky.
However, over time, they either burned or were dismantled. In 1807, at the expense of the landowner Varvara Nadarzhinskaya, a single-altar stone church was built in the classical style in the name of St. Trinity, decorated with columns and a bell tower.
Then the estate goes to Koraskov, and then – to the princes Golitsyn.
On April 18, in 1818, a beautiful red brick mausoleum was erected on the grave of Major General A.I. Korsakov on the square itself, right in the front of the temple. When Grigory Lukomsky visited the estate in 1914, the mausoleum looked sorrowfully. Now there are no traces of it at all. 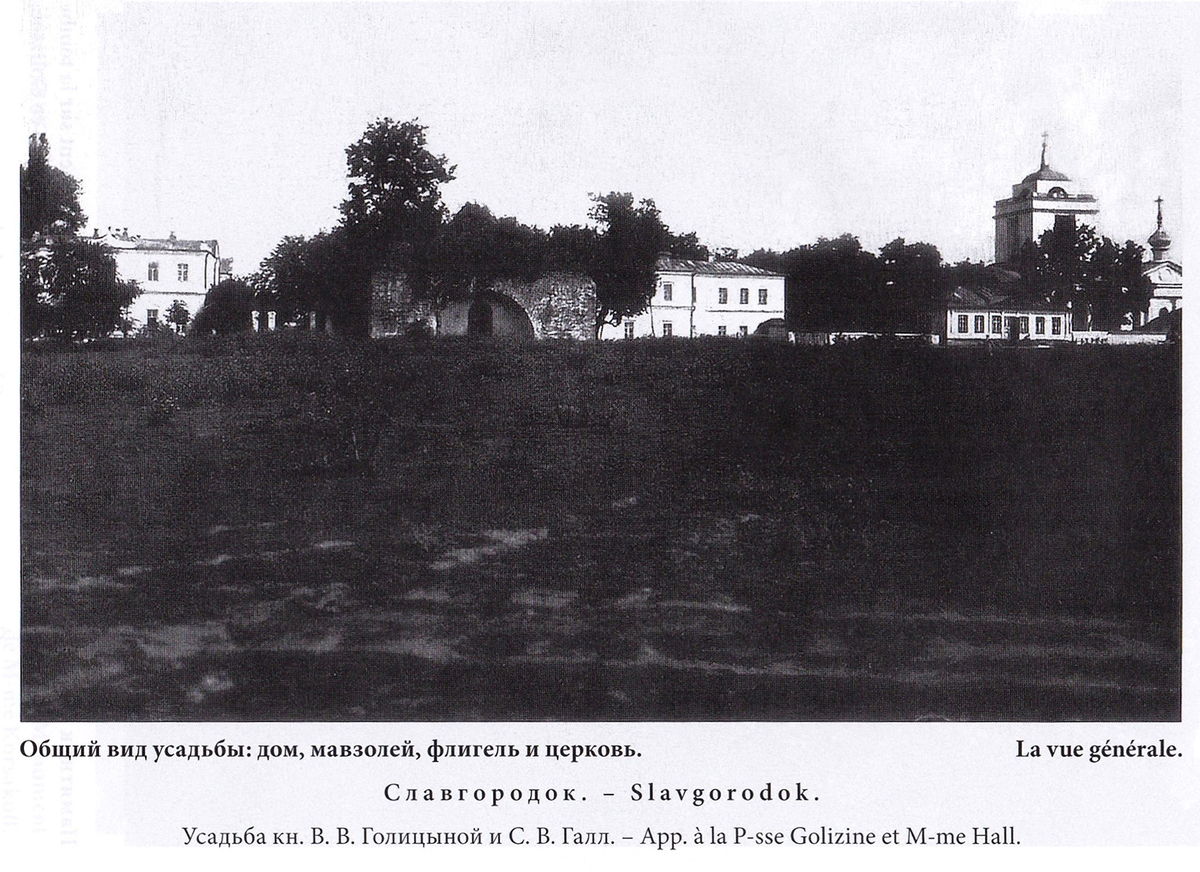 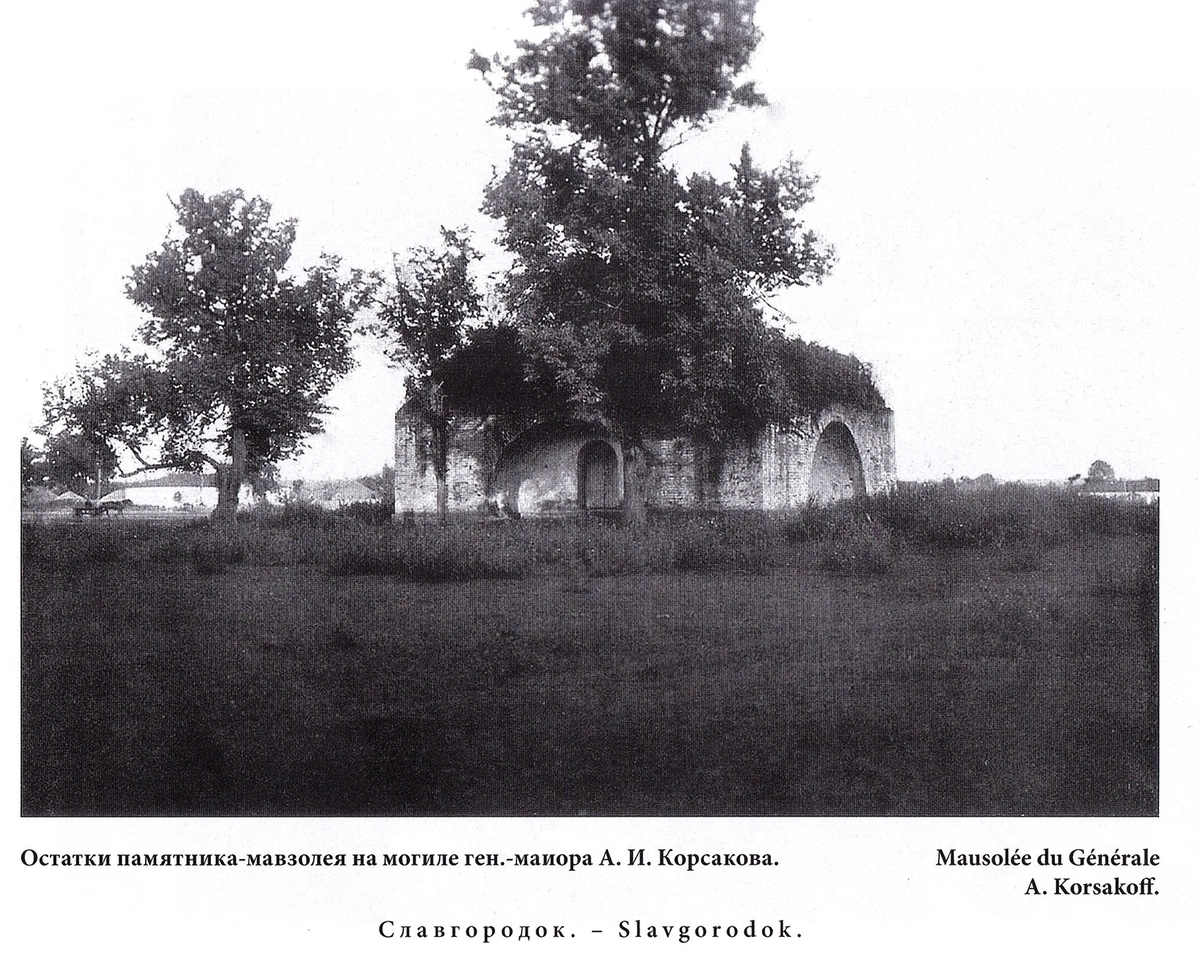 In 1843, Sophia Alekseevnf, Princess Golitsyna, nee Korsakova, renewed the temple. A new iconostasis appeared in it, two kiots in the vestibule, parquet floor in the altar. Amazingly beautiful alabaster images of the archangels Gabriel and Michael, St. Alexis, the martyrs Sophia and Alexandra, Great Martyr Barbara and Catherine, ap. Peter, St. Basil and Martyr Victor were placed in the niches of the outer wall of the temple, but they are left lonely and empty now. 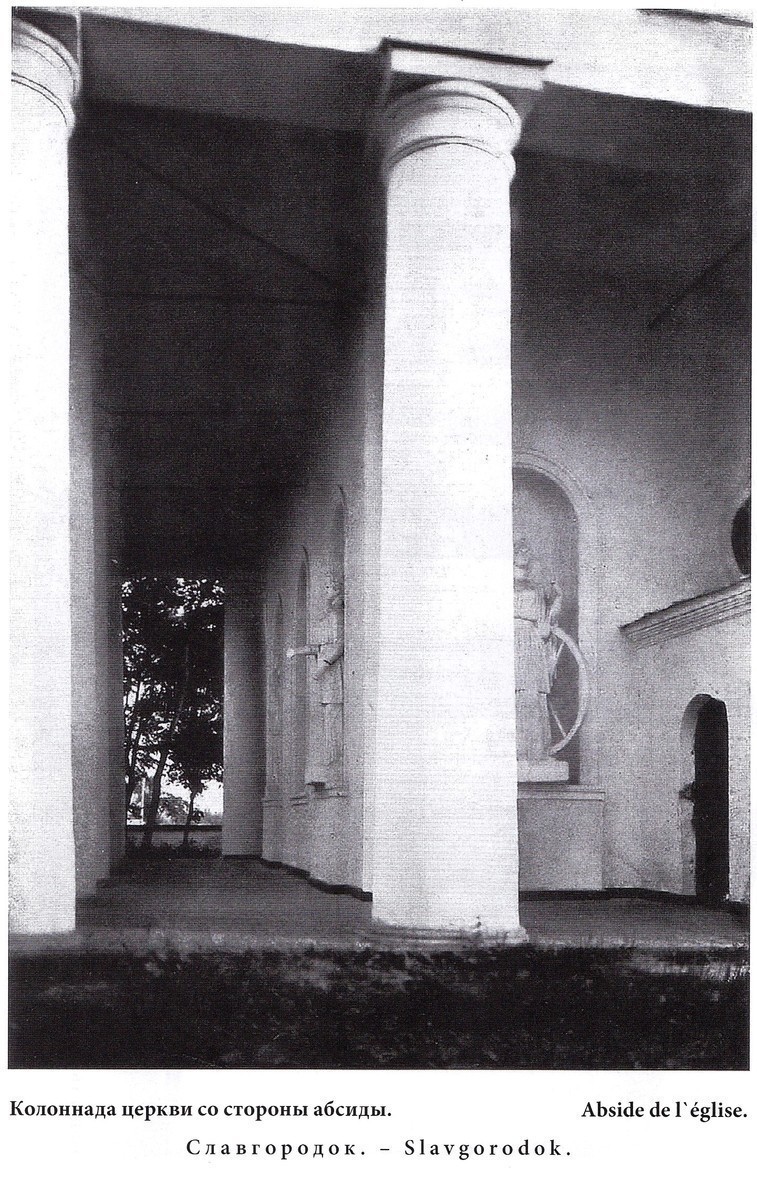 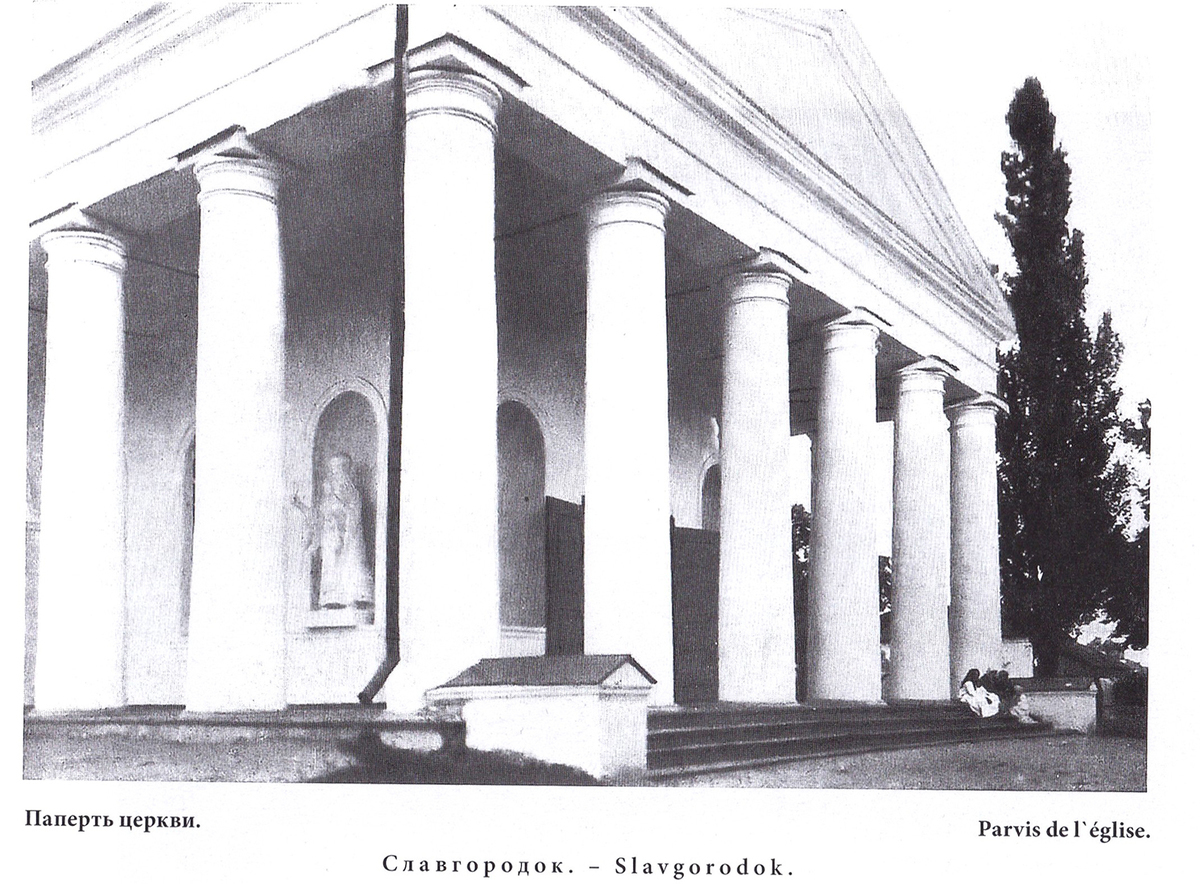 The bell tower was built very unusual: in the form of a massive cube with a straight hole.
During his tenure as bishop and archbishop of Kharkov and Akhtyrsky Ambrose (in the world – Alexey Klyucharyov), namely, in 1882 -1901, these statues were removed, and murals were painted or new statues of bishops in miters were installed in their niches. At the same time, the marvelous iconostasis was removed “due to the dilapidation”.
The reason for this was extremely simple: the watchful eye of the Kharkov bishop saw signs of Catholicism in the temple sculptures.
This, by the way, was nothing extraordinary. On the Slobozhanshchyna, statues, and icons inherent to Catholicism can be found in the temples. In the book of V.F. Davydenko of 1901 “The present state of schismatic sectarianism in the Kharkov Diocese” we can read:
“In addition, in some of the icons adorning the churches and deities of our Orthodox peasants, quite often there are icons and images of saints and sacred-historical events of a Catholic nature, or self- invented images that are the figments of the imagination of local painters. And such images in many villages during fairs are subject to blasphemous trade …
In other measures approved by the Missionary Congress of the Clergy to raise the religious and moral level among the Orthodox population of the parish and to fight with shtundo-tolstovshchina (one of the religious sects), the following should be recognized:
… 10) To ask the diocesan authorities to pay attention of those who should, to the distributed between people icons of the so-called Suzdal and Catholic type, and to the careless way of selling them in an open area, on a mat, under a cart … ”
However, fighters for the purity of faith forgotten that in Ukraine, almost as in the North, sculptural images of saints were quite common. But, despite the new restructuring, Lukomsky in the early twentieth century, wrote that “the temple may well be counted among the best buildings of the province.”
In the garden at the church there was a cemetery on which monuments of amazing beauty towered over the ashes of the previous owners. 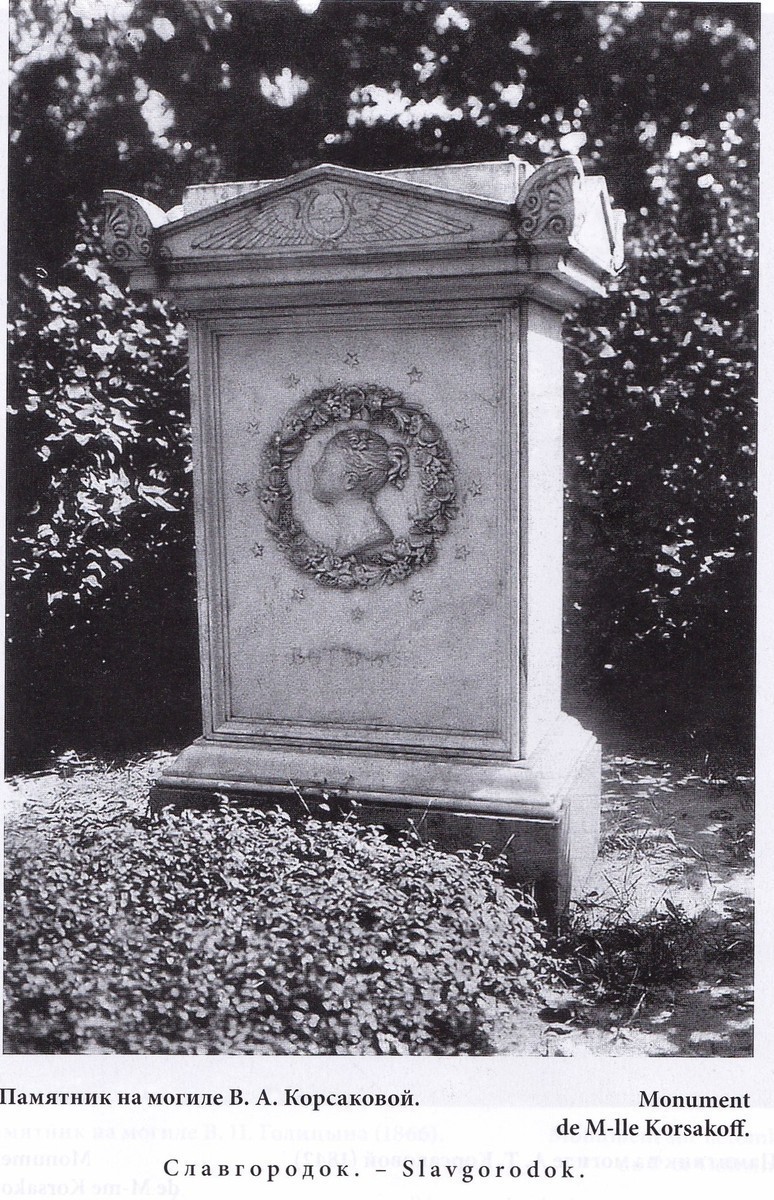 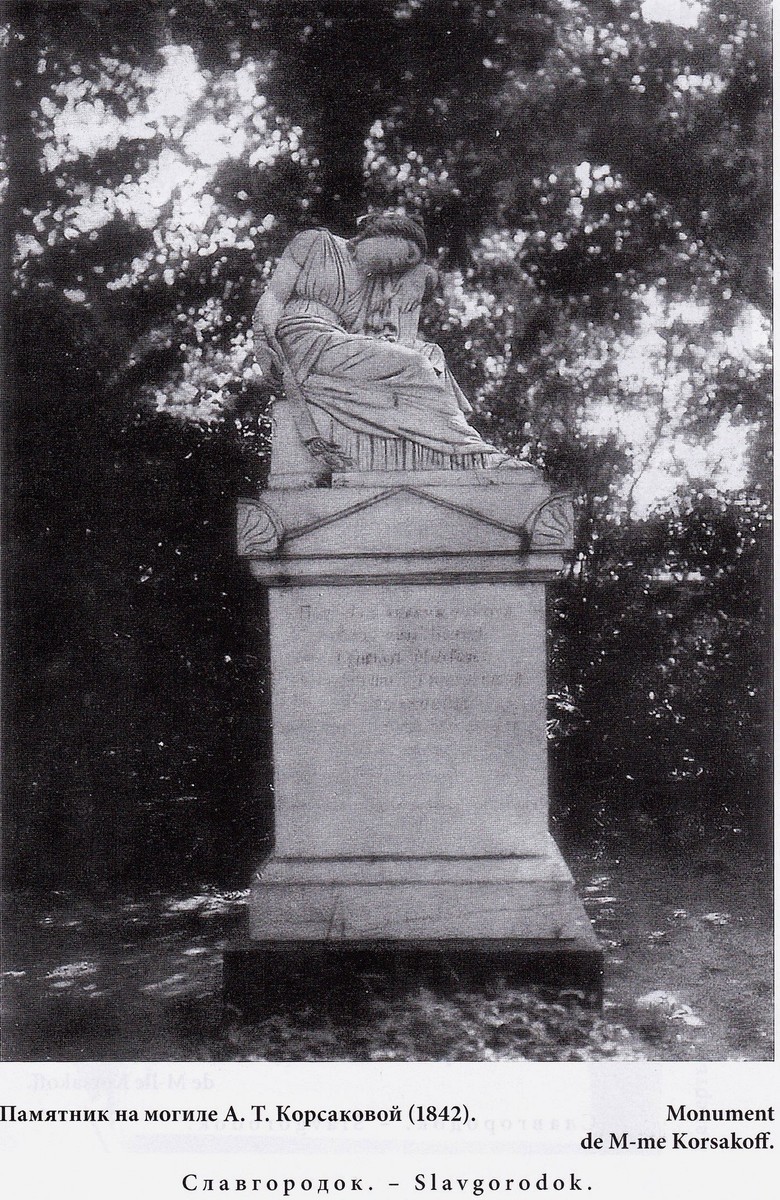 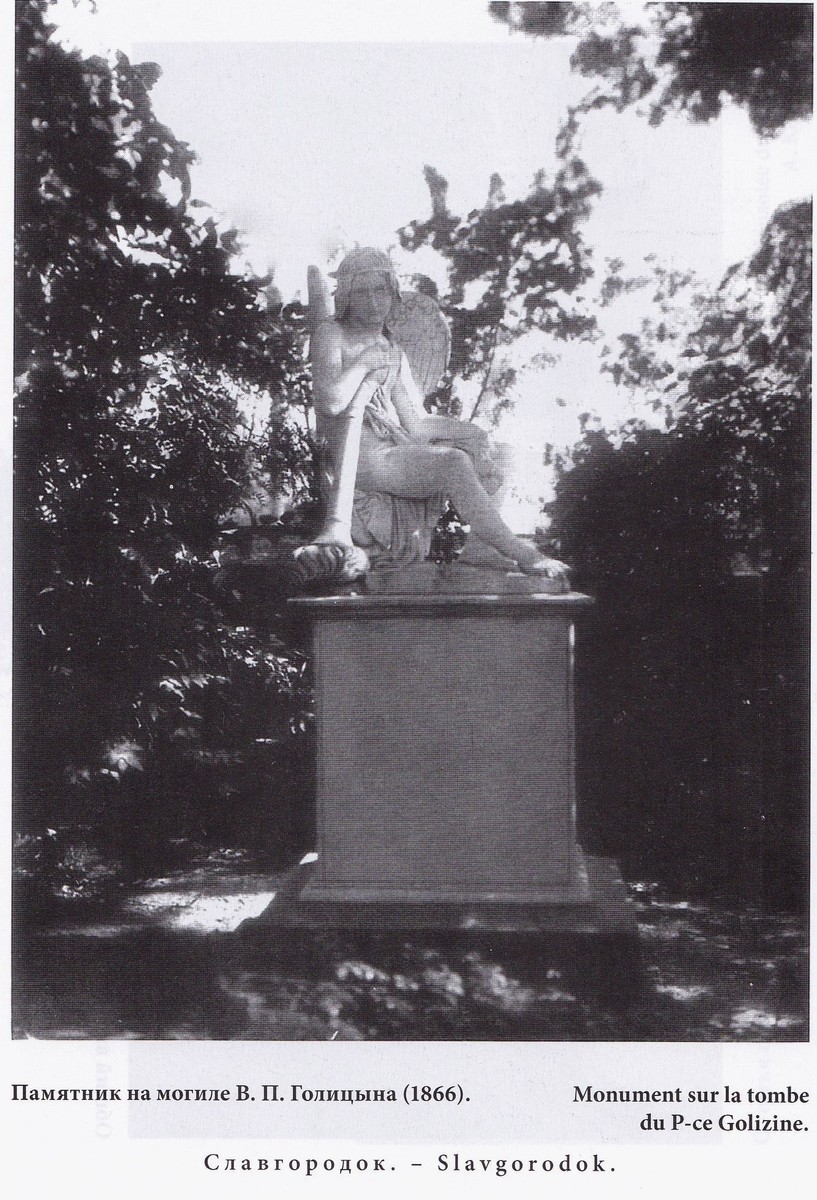 The burials remained untouched until the 1930s. Then they were barbarously dug up, since the “exploiters” could have jewels on themselves …
And only the remaining grave without a monument modestly reminds of the former owners of Slavgorod. 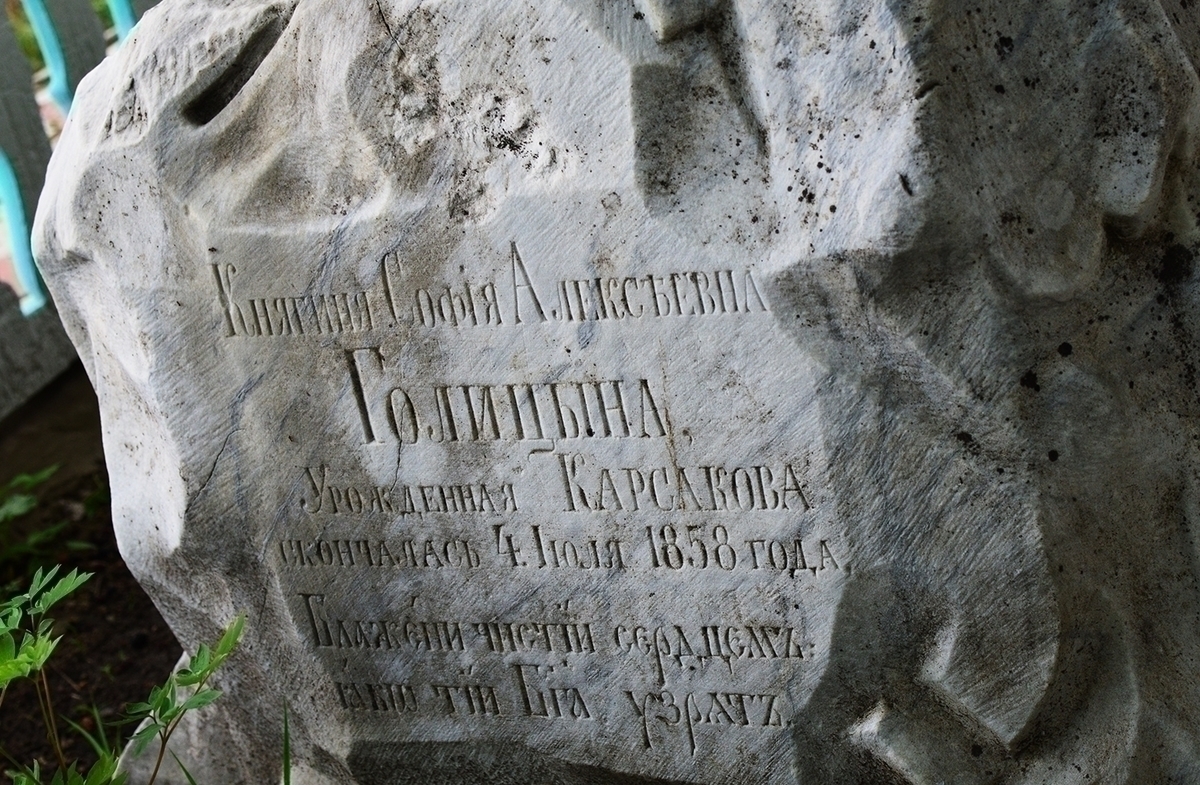 Opposite the temple, on the other side of the vast square, was a manor, from which in our time, despite its considerable size, there is not a trace left. 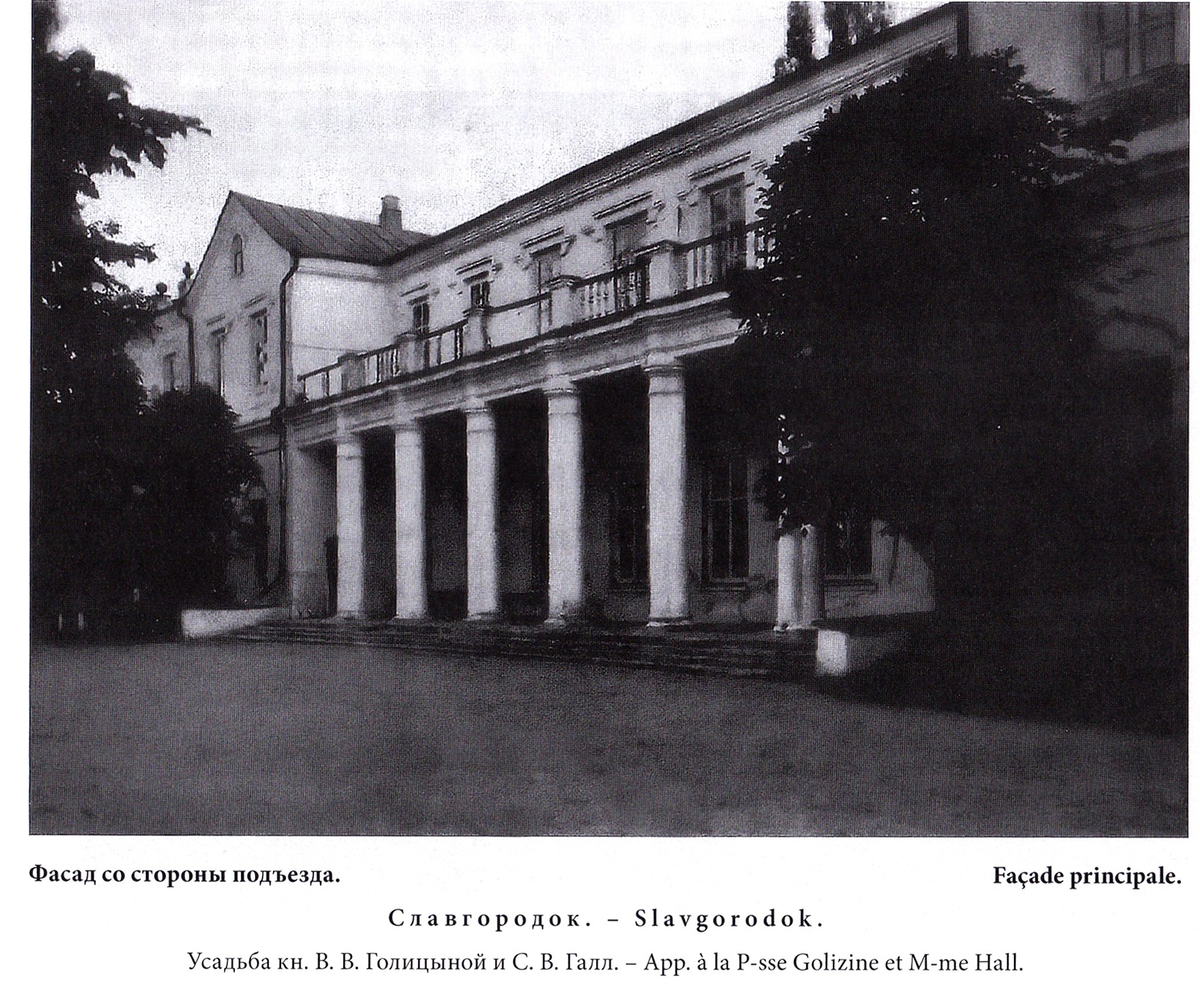 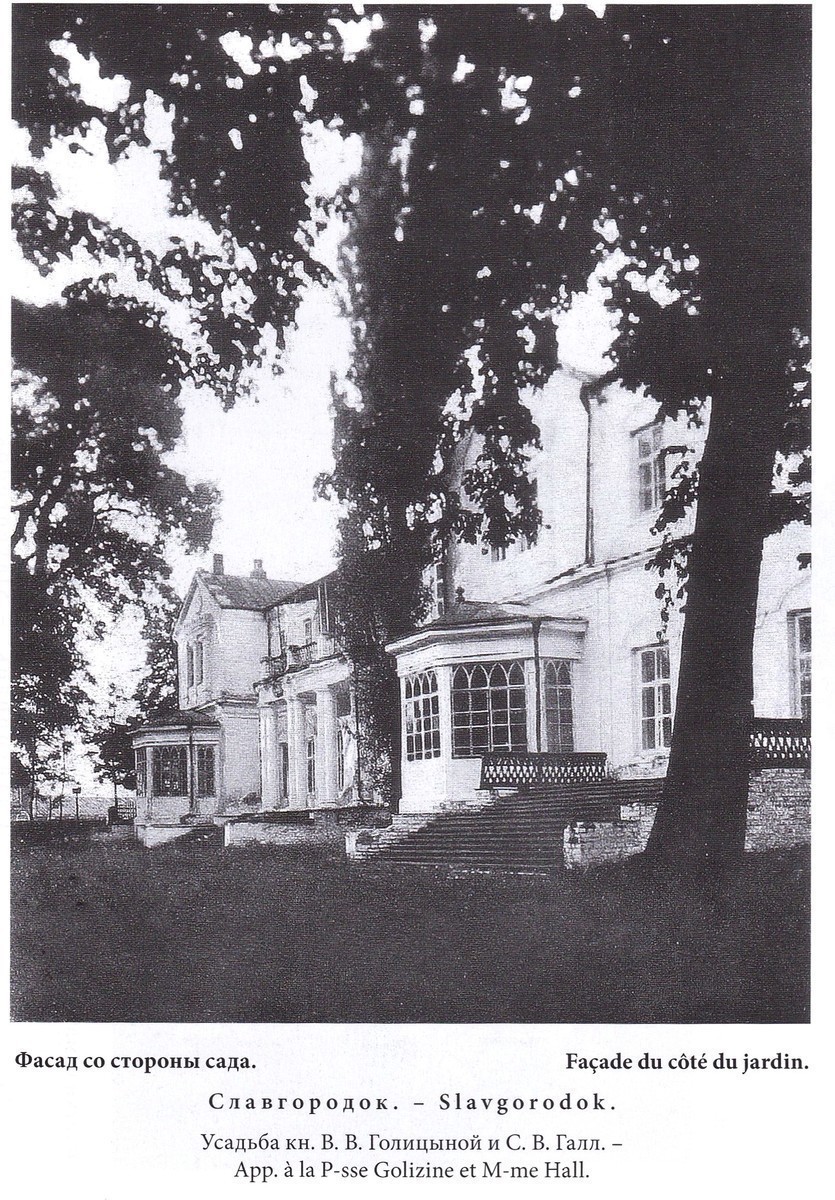 However, the old two-storey outbuildings scattered around the square can still be seen today. The local people told us that a few years ago it was possible to get to an island built up in the middle of a pond in a manor park by the “Golitsyn bridge”, and there (according to them) there are still greenhouse ruins. But, alas, there is no bridge left now, and for us, the expected pleasant walk through the master’s park was akin to a hike through the impassable jungle.
And after all, Grigory Lukomsky was absolutely right, writing in his book:
“A sad impression remains in general from the review of Slavgorodok. A wonderful noble living place with a good house, a “pensive” garden, with a highly artistic church – how much money, how much work was spent on making all this in order to undergo gradual destruction now! ” 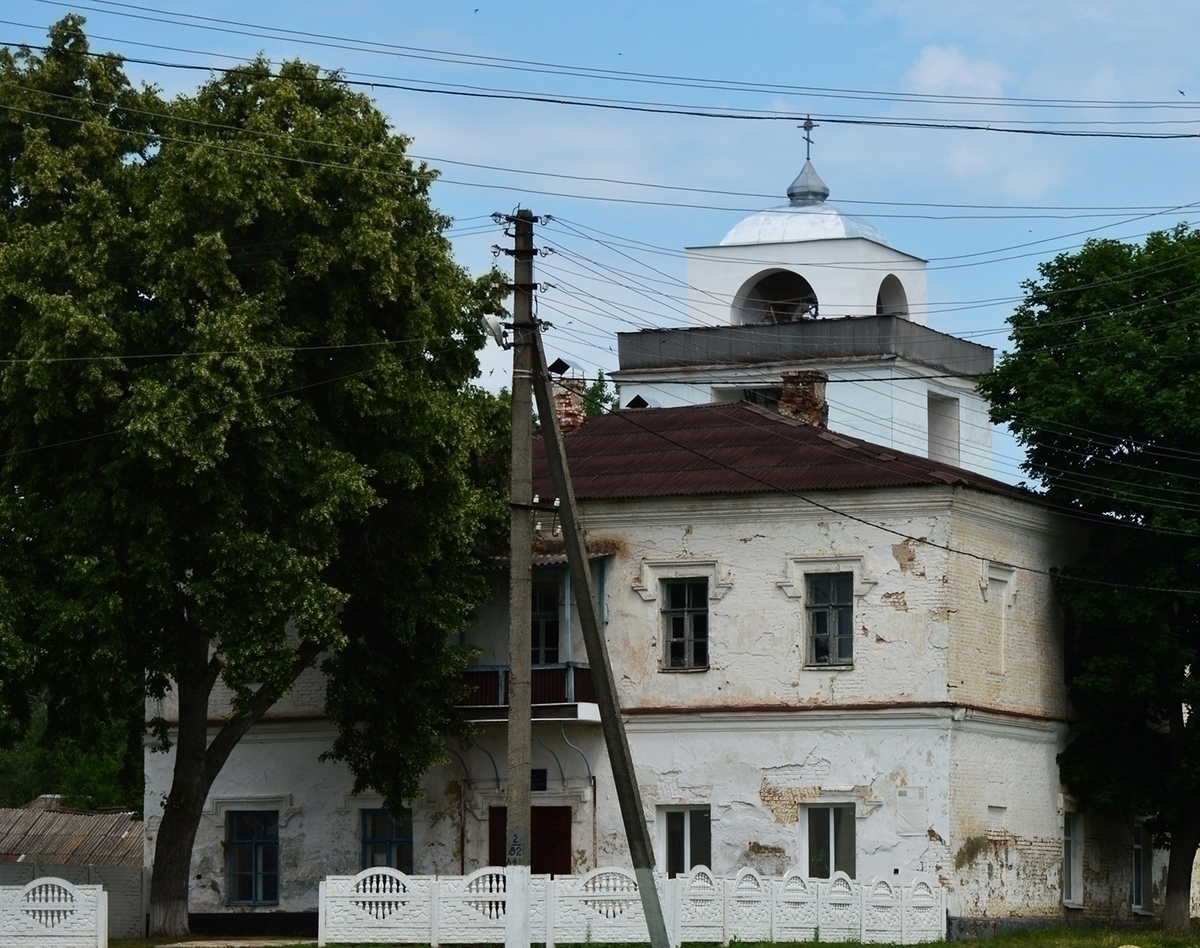