Kremenets (Türkic “kermen” – fortress, in colloquial language – Kremyanets) – a mountain in Izium, 218 meters above sea level.
On the ancient Izyum gentry (the very one where the Crimean Khan, bastard, was outrageous), halfway from Kharkov to Donetsk, there is Kremenets-mountain.
Mountain Kremenets is the highest point of the Kharkov region. Its height is 218 m above sea level and 160 m above the Seversky Donets level. Located on the road from the center of Izium. The mountain is a geological monument of nature; it is interesting for outcrops of the Upper Cretaceous and Jurassic rocks with numerous remains of the organic world. 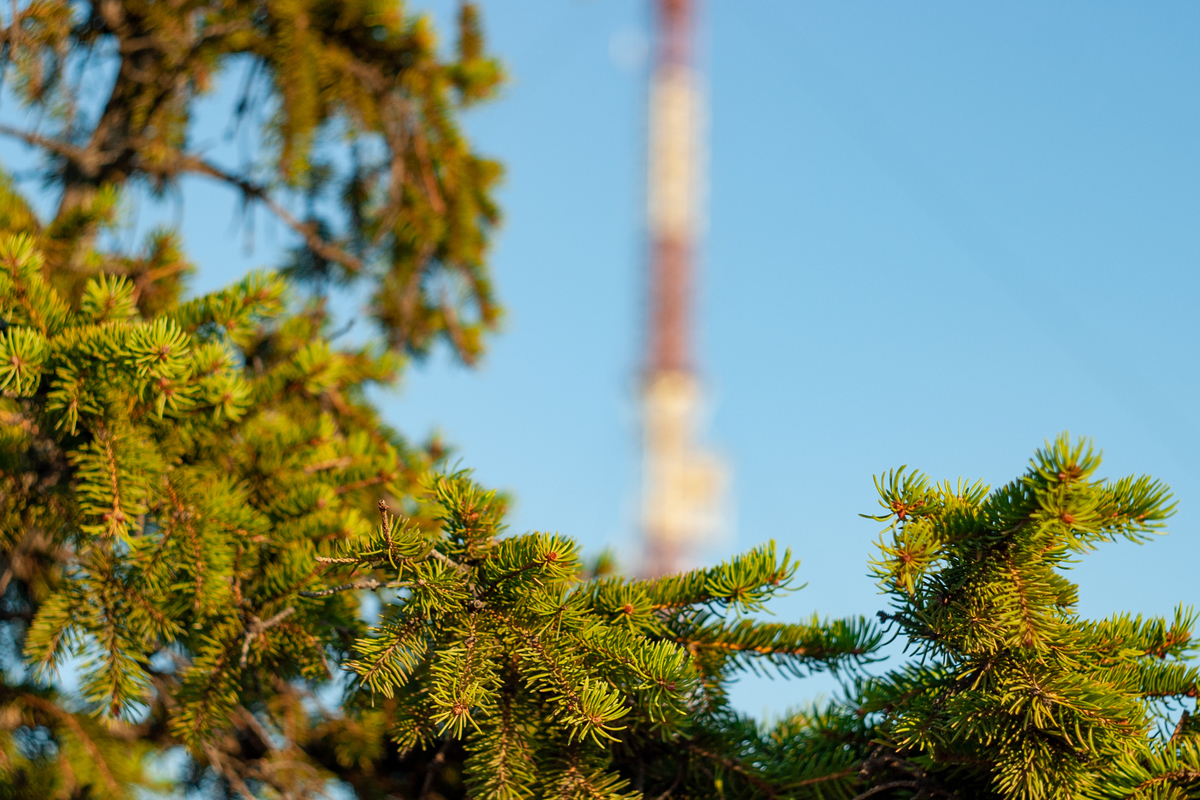 On the western slope of the mountain in numerous ravines, Cretaceous and Upper Jurassic rocks are exposed. The upper chalky sediments of the Shirokovo Formation (Turonian-Cognac layers of the upper chalk) are represented by written chalk, sandy marl with phosphorites and fine-grained glauconite-quartz sand.
At the base of the chalky deposits there are variegated, diverse, gravelly sand and sandstones of the lower chalk. The thickness of the underlying Upper Jurassic rocks is composed of variegated clay of the Volgian and Kimmeridge tiers, white oolitic limestone and limestone-shell rock of the Oxford and Callovian tiers (Izyum suite), ferruginous gravelite and calcareous sandstone with numerous remains of the Callovian brachiopod.
The section was first described by professor of the Kharkov University N. D. Borisyak in the middle of the XIX century and became the standard in the study of Cretaceous and Upper Jurassic deposits of the northwestern part of Donbass.

”Near Izium, in Kremenets Mountain, on the banks of the Donets River, a very instructive section appears, where one can see the presence of white chalk over the lower tier I have taken. The following layering is observed here:
White chalk is exposed on the top of Kremenets right under the chernozem and sediment (in 1 ½ arsh. thick.). It is apparently divided into the lower soiling chalk and the dense chalk marl.
Black flint, in pieces up to 1 pound weight, containing glandular nude, and sometimes Catill. Cuvieri shards, is make lines in it.
Solid, quartz sandstone, up to 8 ft.
Green sandy clay, rich in glauconite grains and lime particles.
Porous sandstone, soft but not loose, very light, greenish-gray, up to 10 ft.
Sandstone, similar to the previous one, but more ferruginous, with ferruginous-sand nodules, passes to the bottom into brown-yellow and white loose sand, with a fall to 12 ° by N0.
Greenish sandy clay and sand. Two last layers continues up to 35 ft. All the mentioned mass of green sandstones rests on Jurassic limestones, clearly distinguished by their fossils. The fragments of trees grooved by the fissures and teeth of Oxyrhina Mantelli that I found in the sand clay just described their affiliation to the Cretaceous, rather than Jurassic soil. ” .”
“On the stratigraphic relations of soils in the Kharkiv and adjacent provinces.” Res. N. Borisyak. – A collection of materials relating to the geology of southern Russia, book 1, Kharkiv, 1867 – p. 30-31

The Cretaceous rocks on the top of Mountain Kremenets are cut by the Kharkov-Dolzhanskoe highway nowadays.
In the beams and ravines of the western slope of Kremenets, there are outcrops of Jurassic rocks of the Izyum Formation. The northernmost outlet of the Upper Jurassic limestones of the East European Platform is located on Mountain Kremenets. Clay rocks are widespread to the north. Jurassic limestones contain diverse fauna. The geological section of Mount Kremenets has great scientific value.
In 1869, the section of Jurassic deposits was studied in detail by Professor of Geology at Kharkov University, A.V. Gurov.

“Izium section. It is no less interesting because it represents a more complete development of Jurassic limestones up. In other outcrops above the conchoid conglomerate lies mostly oolitic limestone only. But here we see, in addition to the oolite, several more strata of the marl composition containing a large number of shells, including those found in the west in the Kemmeridzhsky or Portland floors of the Jurassic formation. This section is also important in that it is perfectly possible to observe stratigraphic relations between the Jurassic and Cretaceous formations. A steep cliff of the Kremenets mountain opens to our eyes, rising, according to barometric measurements, made by prof. Borisyak, up to 371 ½ f. above the river level; Cretaceous strata directly overlap Jurassic formations in it, stretching along the right bank of the Donets almost at a distance of 2 versts. The total thickness of the Jurassic calcareous sediments in this profile is 40-50 f. The following alternation of formations from top to bottom appears to the eye:
1. White writing chalk
2. Greenish sandy clay, with blocks of hard sandstone with quartz cement entangled in the upper level.
3. Porous sandstone, greenish in color, sometimes ferruginous and turning into yellowish, friable sand below.
4. Damp green sand clay
5. Layers of unclean marl limestone overflowing with cores of Neriniae Visugris, Rom.
6. Caviar, fine-grained limestone, partly loose. partly bonded with hard lime cement.
7. Loofah limestone, white or yellow. infused almost completely with the Neriniae Visugris species.
8. Dense and very hard limestone containing gypsum in interlayers or nodules, and marl made with corals.
9. The crustacean conglomerate.
10. A layer of oolitic limestone.
11. Light gray dense limestone.
The studied cliff is located on the right side of Kremenets. Formations from the shore seem horizontal; but the general bedding is noticeably leaning towards Kamenka. Nos. 5–11 of this outcrop belong undoubtedly to the Jurassic formation. Prof. Borisyak attributed overlying strata (till the Cretaceous layaers) to the lower tier of the Cretaceous formation; “
Gurov A.V. “Geological studies in the southern part of the Kharkov province and the surrounding areas”. Kharkov, 1869 – with. 162-163 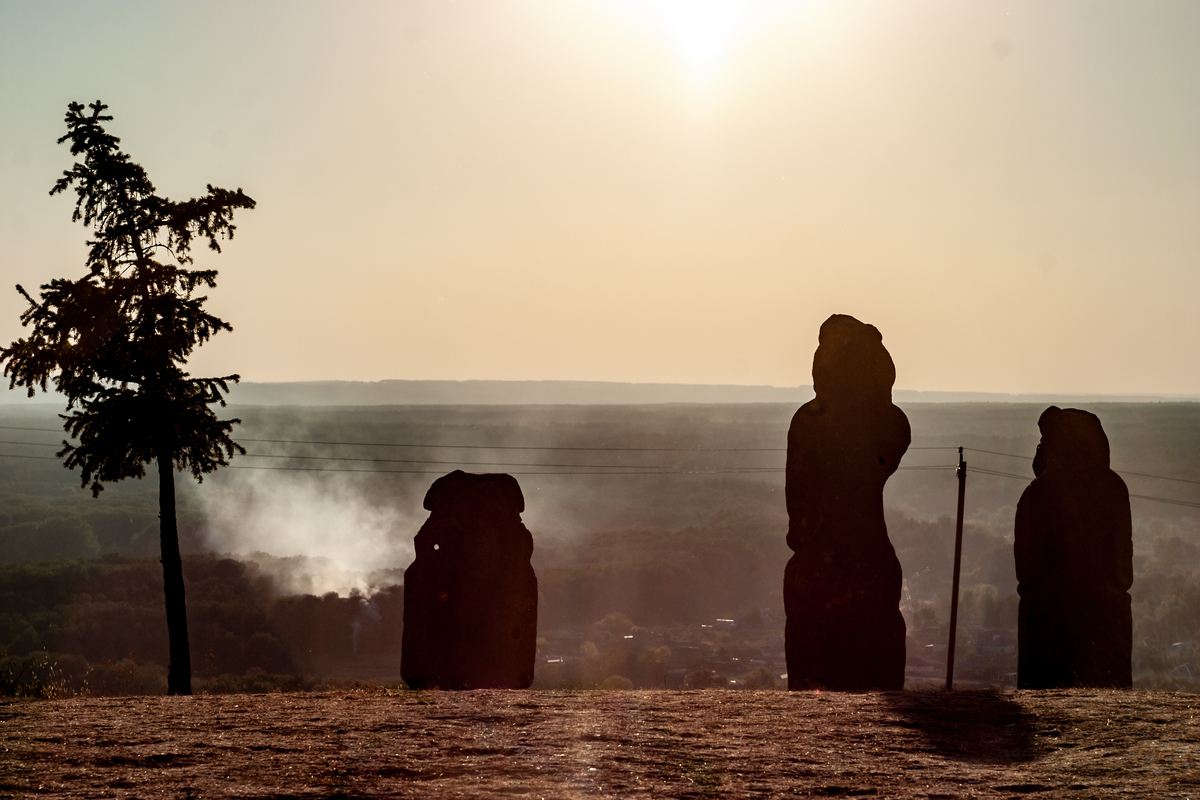 The history of the mountain.

The unique location of the mound, which provided it with the fortification role of an observation post, allows you to practically capture the huge horizon of marvelous Slobozhansky nature with the Bukin and Izyum forests, the Holy Mountains (you can even see the famous monastery in clear weather), the waters of the Seversky Donets and the whole city at the foot from the top of it. Its vegetation is made up of typical representatives of the steppe zone: feather grass, ephedra, and fescue.

During the Iron Age, the Izium region was the habitat of various nomadic peoples. Replacing one another, Scythians, Sarmatians, Goths, Huns, Alans, Pechenegs, Polovtsy lived here. Stone sculptures of the Scythian-Polovtsian period are collected on the top of Mount Kremenets from the vicinity.

In the Turkic languages, the phrase “long mountain” sounds like “uzyun” – a mound. According to one of the main versions, the name “Uzyun” was transformed into “Izium”. The elevation above the river gave the name to Izyumsky Way, and later – to the city. “Izumsky perelaz” – a convenient ford across Seversky Donets at the foot of Mountain Kremenets – many researchers attribute it with the campaign of Igor Svyatoslavich’s squad again the Polovtsy in 1185, told in the remarkable monument of ancient Russian literature, “The Word of Igor’s Campaign”.

The modern history of the mountain dates back to the XIV century, when Kremenets became one of the Tatars outposts with the appearance of the sentinel-defensive fortification “Gezun-kerman” on its top, which served as their base for raids on the adjacent lands. The fortified city existed until the border between the interests of nomads and Muscovites was divided by Donets.
In the XVI century, to control the Izyum Sakma – one of the main roads of the Tatar attacks, watch patrols are being created at the place of Izium. In 1637, Tsar Mikhail Fyodorovich in his letter pointed out the need to build a city near the Izium mound. The first memories of the town existence appeared in 1639. Later, in the 50s of the 17th century, a small fortification appeared – the Izium trench. In the 60s of the XVII century, a small group of immigrants settled in these places.

In documents of 1680, the settlement was called Iziumsky town. In 1681, a fortress was built on the site of the current Izium, which consisted of “big” and “small” cities. On the mountain Kremyanets, where today the “Square of Remembrance” was the “Castle” or “redoubt Kremenets”. Watchtower to observe the approaches to the fortress. The current central part of Izium is the former “big city”.
In 1685, Izyum became a regimental city – the center of the Izium Sloboda Cossack Regiment, to which 13 surrounding cities and settlements were subordinated.
During the Second World War, Izium and Mountain Kremenets became the arena of hostilities. From October 1941 to May 1942, stubborn battles were fought in the area of Izium.
In 1985, on the occasion of the 40th anniversary of the victory, a memorial complex was opened on the top of the mountain. A wide stone staircase was erected to the top of Kremenets, on its sides, in memory of the exploits of Soviet soldiers during the Great Patriotic War, samples of military equipment were installed – tanks, guns, self-propelled guns that participated in the liberation of the city.
The memorial complex created in Kremenets in 1988 is devoted to all the soldiers who defended at this height the freedom of their native land from any aggressors and for all the time. And although the central part of the mountain is pierced by reminder motives of it’s last war, an alley of Scythian and Polovtsian stone sculptures stretches along its western slope. So now it is a mound in memory of all ancestors, thanks to which Ukraine lives to this day. 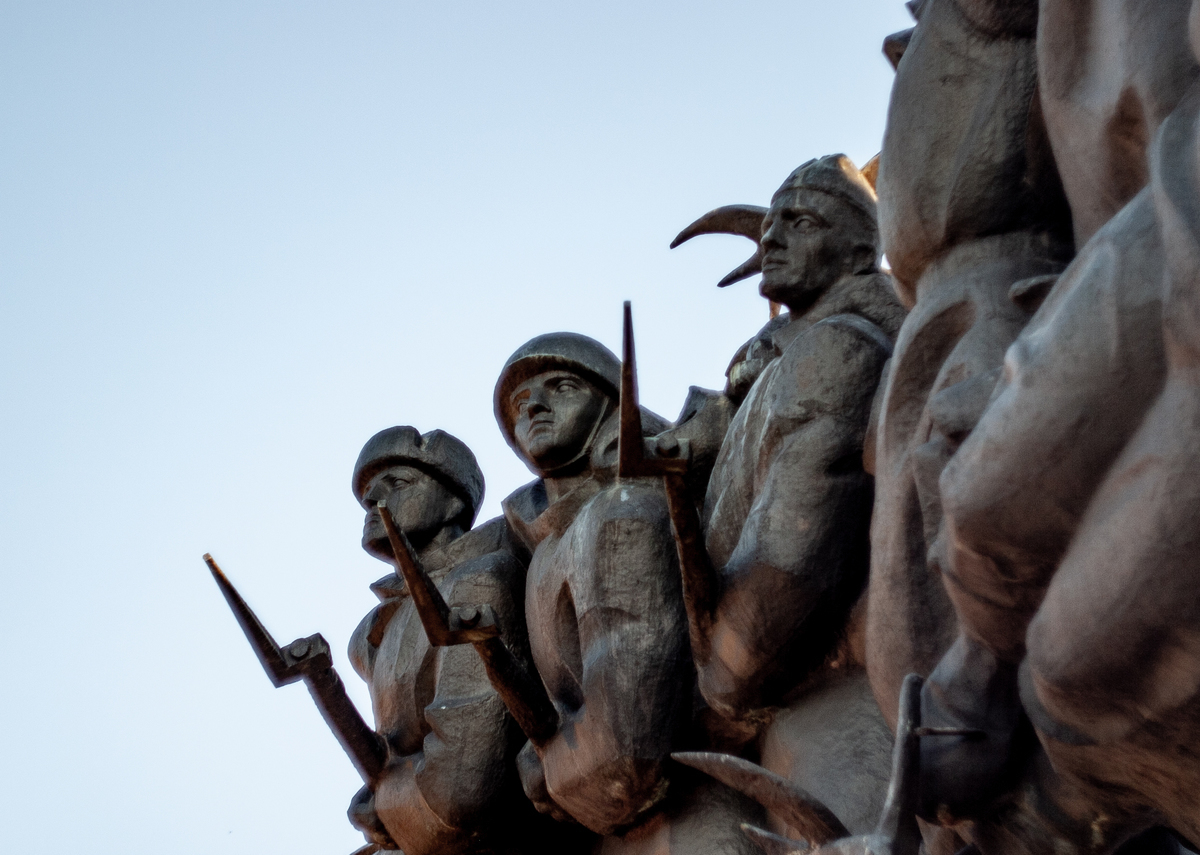 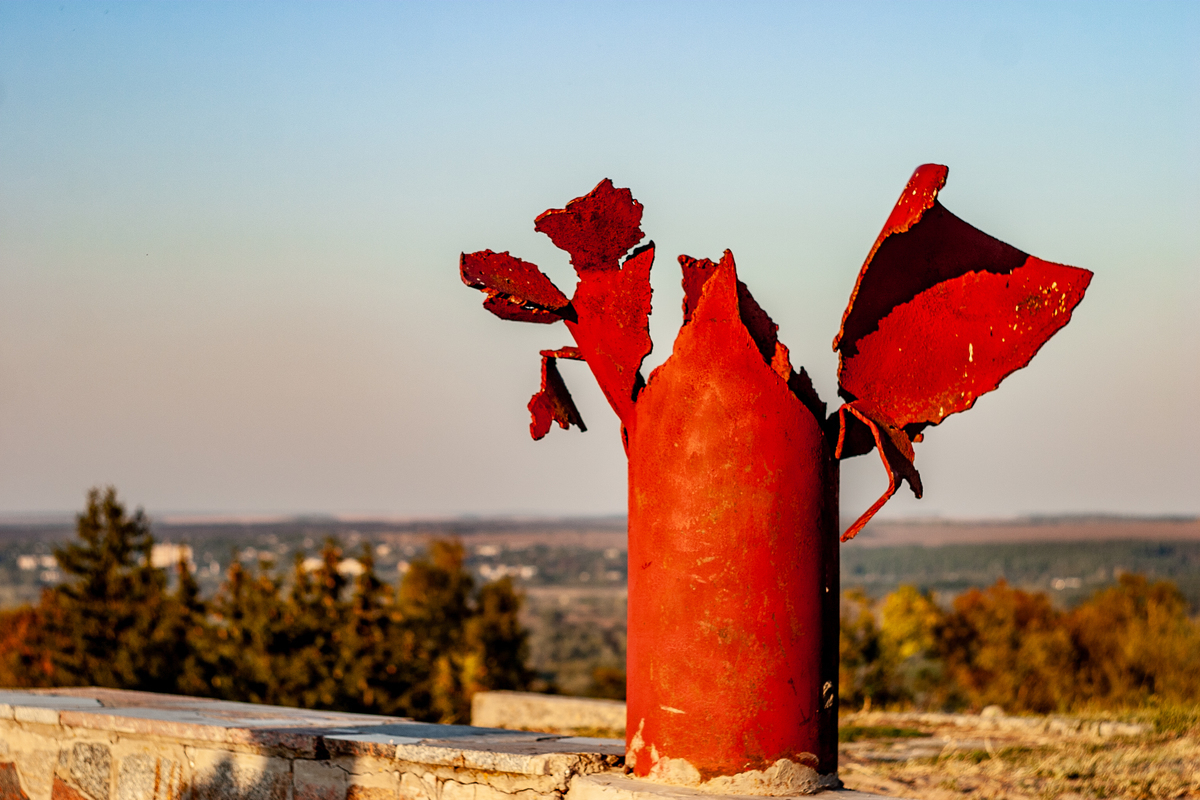