Today I invite everyone to jump in the “time machine” and to observe the Old Merchik through the eyes of those who visited it in the 19th century. 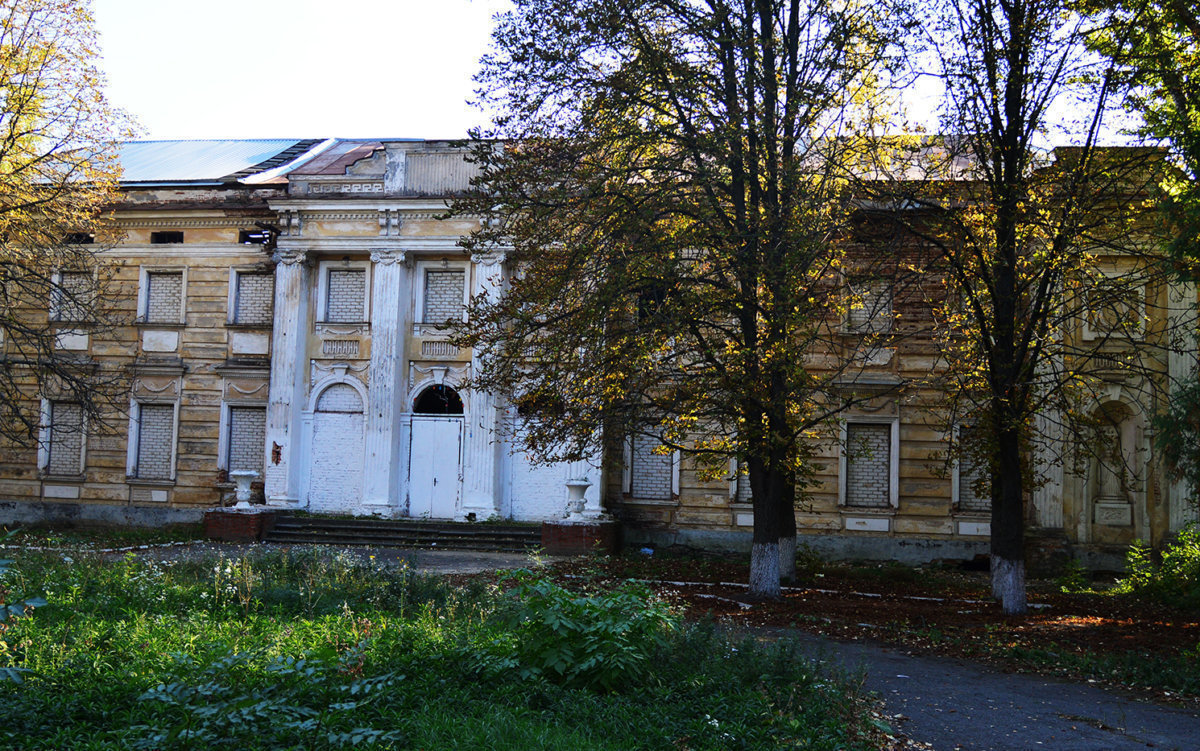 The nephew of the famous Kharkov provincial architect Pyotr Antonovich Yaroslavsky, Vasily Ivanovich Yaroslavsky often visited the estate at the beginning of the 19th century and was familiar with its owner. In his memoirs, Yaroslavsky wrote:
“Grigory Romanovich Shidlovsky was once the most brilliant landowner of the province. He built a huge stone two-story house on a high basement in Old Merchik; the stoves were placed below – and from them the walls of the hall and the living room, lit by two lights, with choirs for musicians were heated. There was a stone two-story outbuilding for placing a kitchen and servants opposite. There were also two more stone outbuildings: one for the arrival of guests, and the other for the butler; there were stone stables and sheds in the back yard. In the garden there was a stone arena, a reservoir and a rotunda in the form of a round two-storey temple with arches; music used to play upstairs, and visitors rest in coolness downstairs. All house and garden buildings were surrounded by a stone fence. Moreover, two stone two-story houses were built in the village, one for the priest and the other for the tenant. All these buildings were built according to the plans of A. A. Palitsyn. The estate of Grigory Romanovich was landscaped; the peasant houses were all clean and fenced. ” 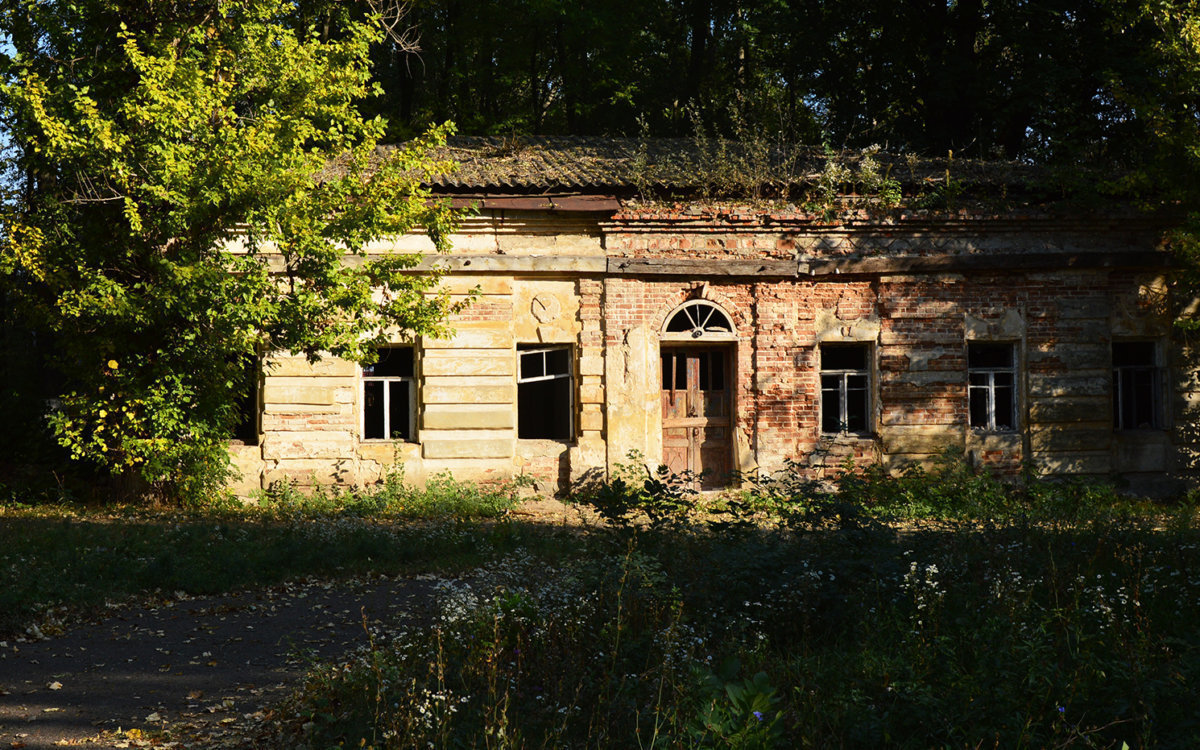 The well-known bishop of Kharkov and Akhtyrsky Savva in 1878, during his visit to the parishes of the Kharkov province, also visited the Old Merchik. The manor made a great impression on the bishop; he mentioned the time there in his autobiographical notes, “Chronicle of My Life”. 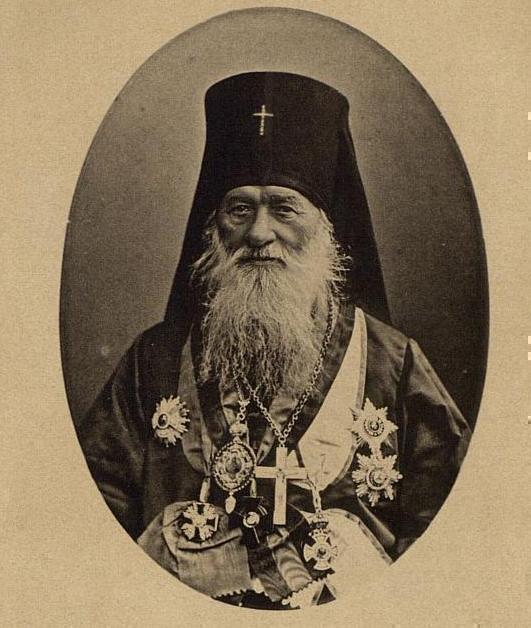 “On June 8, after early tea, I hastened on my way and through the settlements of Trostyanets, Bakirevka, Kirikovka, Novaya Ryabina came to the settlement Matveevka, where the Bogodukhov leader of the nobility D. N. Kovanko warmly offered me a lunch. From Matveevka, through the city of Bogodukhov and the settlement of Aleksandrovka and Novy Merchik, I arrived to the settlement of Old Merchik already after sunset, having traveled 108 miles a day. The church in this settlement, when illuminated at night, seemed very magnificent to me, abundantly supplied by the zeal of the pious owner Eugene Mikhailovich Duhovskiy with sacred utensils and a sacristy. Overnight stay was offered to me in a landowner house, which, due to its vastness and magnificence of decorations, can be for sure called a palace. But the same happened here as in Trostyants: they were waiting for me here on the night of the 6th, and I arrived on the 8th. Of the three Dukhovsky brothers (they are children of a St. Petersburg priest), the eldest Evgeny Mikhailovich, who actually owns the house and the estate, was in Paris at that time; the second Sergey Mikhailovich, a lieutenant general was in the Caucasus, and the youngest Viktor Mikhailovich, who remained at home, was waiting forward to me, inviting some of neighbors and acquaintances from Kharkov to meet me. But, after a two-day wait in vain, he let the guests go and went to Kharkov on his own business, leaving me, in case of my arrival, the whole house at my disposal and instructing the manager to make me an appropriate reception. After a sumptuous dinner, which was shared with me by father Klyuchar, the local Dean, parish priest and the bailiff accompanying me, I hastened to go to bed, feeling extremely tired from such a long day trip. This was my last night on the road.
On the 9th, having freshened up on a morning walk in the vast manor garden and the park, having drunk tea, I left a hospitable shelter and headed for the home already … ” 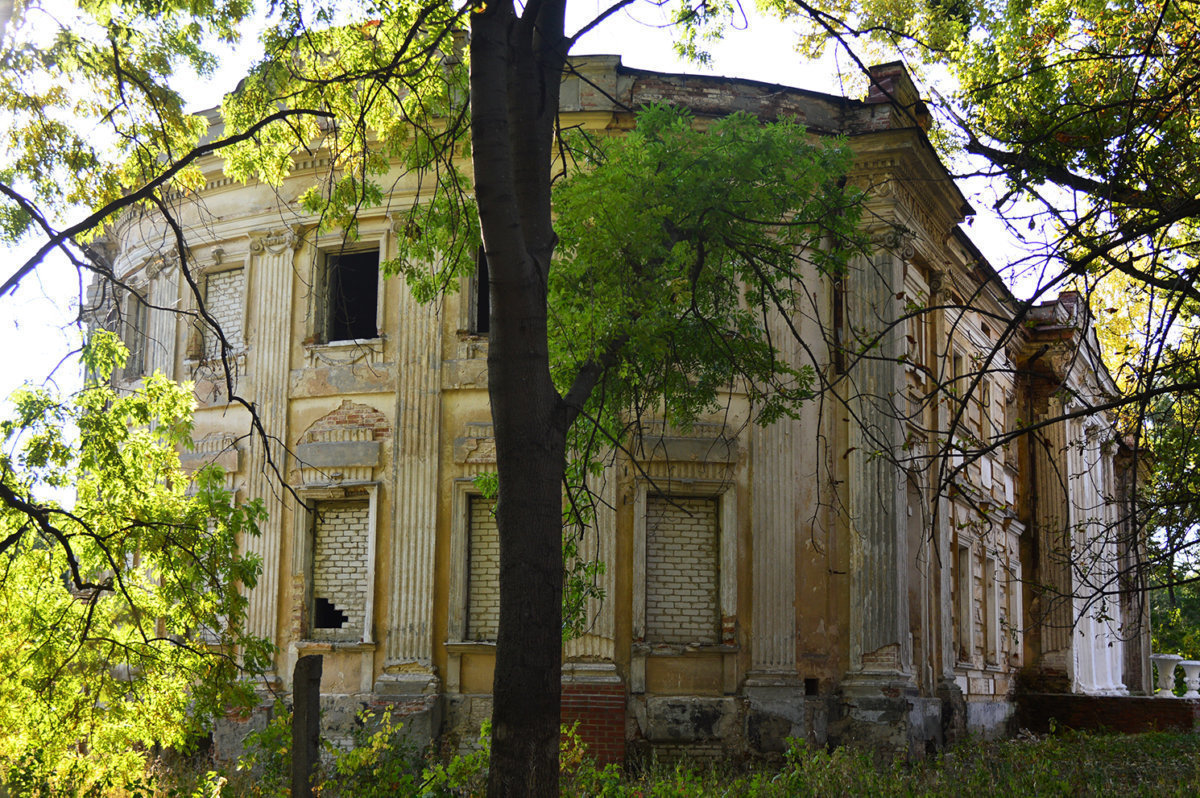 The son of the Kharkov landowner Prince Dmitry Fyodorovich Golitsyn, Alexander, was a very famous person among the connoisseurs of the past of our city and region. Alexander Dmitrievich held the post of chairman of the Kharkov district council at the beginning of the 20th century, was the district leader of the Kharkov nobility, during the war with Japan he took an active part in the work of the Red Cross, became one of the founders of the “Union of October 17” party (the most progressive party of that time), then he was a member of the III State Duma, supported hetman Skoropadsky. And, while living in exile in Paris, he headed the “Kharkov Fellowship”. In his memoirs, the prince speaks about the estate in Old Merchik with great love and warmth. This is not surprising – because his relatives lived there, and the prince often visited with them in childhood. 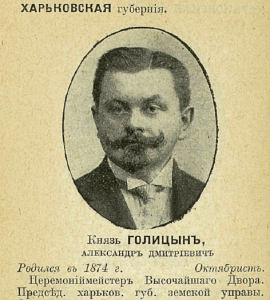 “… After the death of the grandfather, we annually came with mother to the anniversary of his death in Starye Vodolagi, where in the church, over the tomb, a memorial service was held with a requiem. By the way, these annual arrivals in Starye Vodolody from our permanent place of residence – Dolzhik – are coverted with special originality and a haze of distant antiquity, so it’s worth being described … It was not possible to make such trip at one time. Fortunately, just halfway there stood the rich and vast estate of Merchik, owned by Yevgeny Mikhailovich Dukhovsky, married to my mother’s cousin, Sofya Nikolaevna. This manor was also historical. In the center of it was the palace of marvelous architecture of Rastrelli with wonderful tracks descending into a huge park, surrounding it with a space of more than one hundred acres. This estate belonged at first to the Szydlowski family, then it passed to Orlov, the commander of the Cossacks during the Battle of Austerlitz (a picture of this battle with three emperors on a hill and with Orlov, riding in front of his regiment going into battle, hung in one of the halls of the palace) . Further, this estate passed to Luzhin, von Mecca and, finally, was acquired by Dukhovsky from him… In this very estate, when Dukhovskiy was already 54 and married the cousin of my mother, twenty-year-old S. N. Bakhmetyeva, daughter of a neighbor, who was broke already at that time, we made a halt halfway between Dolzhik and Stary Vodolody. The horses harnessed, fed and rested, and if we were in a hurry, then by evening we continued our trip during the chill, arriving at our house for supper. But this stop halfway was taken for several days often, especially when it coincided with July 30, the day of some kind of family holiday of the Dukhovskiy family. In this case, we were given a separate outbuilding with the appropriate servant at our complete disposal, in which we felt ourselves as at home.
Our stay in Merchik during the times of our childhood and adolescence left me the most pleasant memory. As I already described, there was a huge wonderful park at the palace, where you could get lost and walk for hours. In the park there were several ponds of running water in which you could swim. In the remote part was the whole “Darial Gorge” – a deep ravine, overgrown with forest, which filled us with fear … ” 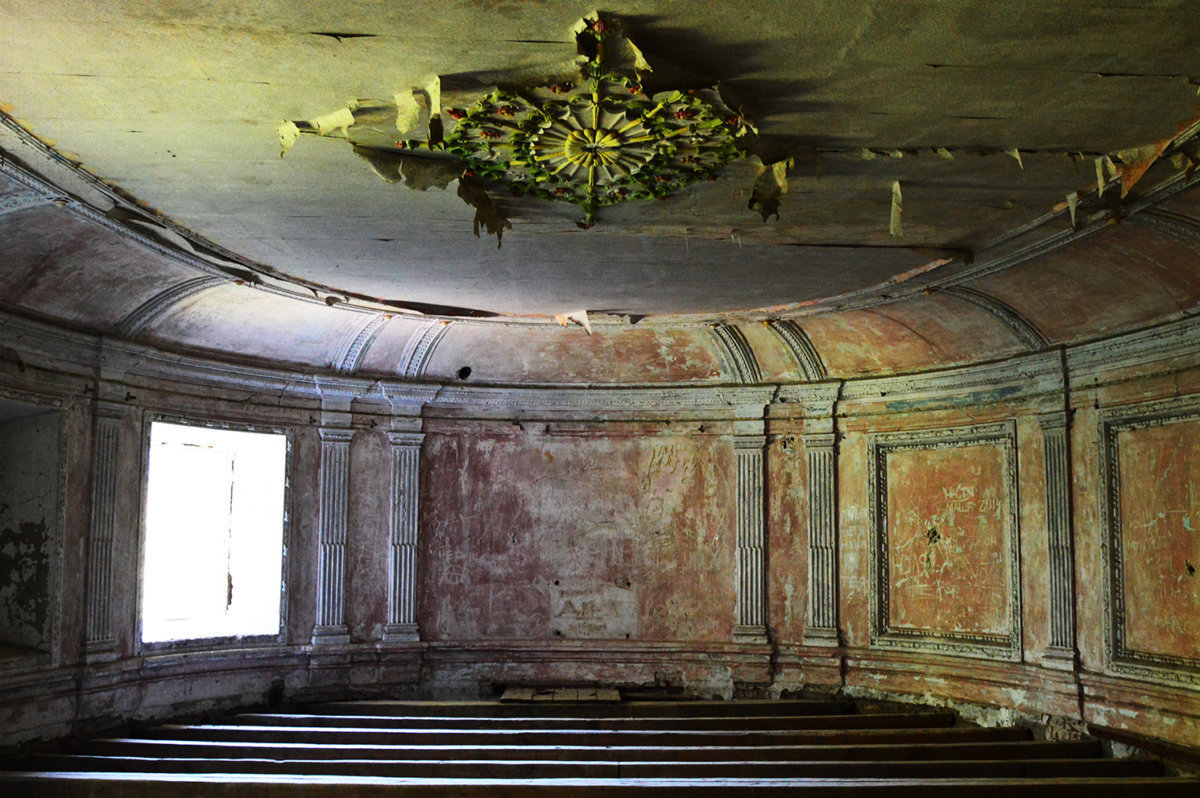 Years passed, now the music is not playing in the halls of the palace of the Old Merchik, paintings are not hanging. Kharkov bishop is no longer walking in the once beautiful park, and the children are not playing their games there. Ruins, decline and desolation – this is what the estate in the Old Merchik is now.

On April 15, 2018, a fire broke out in the estate for an unknown reason. On April 18, wooden planks continued to smolder in the estate – firefighters could not get inside the huge building and extinguished from the outside. Now the building is not just in disrepair – the roof and ceilings burned down and collapsed. Whether the estate will be restored is not known yet.