In 1778 (this is the most early mention of the farm in the documents), only 179 people lived there. At that time it belonged to a famous tribe of the Slobodskaya foreman – Alferov. Then Somov family owned the steading, and at the beginning of the XIX century Lifino in a way of a dowry of wife goes to Khrushchev.

In the documents for 1860 we can read:
“Lebedinsky County.
Natalya Aleksandrovna Khrushcheva – a village of Pechishchi with 2 farms”.
The Khrushchev family itself was inscribed in the VI part of the noble family tree of the Kharkov gubernia.
This part describes the ancient honorable noble families. “The ancients of the noble ones are not different in essence, as those families, proofs of noble dignity of which go back a hundred years and more; their noble beginning is covered with obscurity. ”

“The Khrushchev family leads its ancient noble descent from the steward of Ustinia and his children, the stewards: Athanasius, Ivan, and Timothy Ustinovich Khrushchov, whom were favored with immovable people inhabited estates for their service according to letters from the Great Sovereigns of Tsars and Grand Princes of Russia, John and Peter Alexeevich. In 1651, the children of the steward Ustin Khrushcho inherited the estates: Athanasius and Ivan the estate of the village of Basovo in the Tula province; then, both hereditary and give directly by the Sovereigns, estates were inherited in two lines … ”

No less interesting is the coat of arms of the owners of the Lifin manor:
“In a silver shield, in a scarlet flame, a black salamander. The shield is crowned with a noble crowned helmet. Crest: peacock tail. Basting: on the right is black with silver, on the left – scarlet with silver. ” 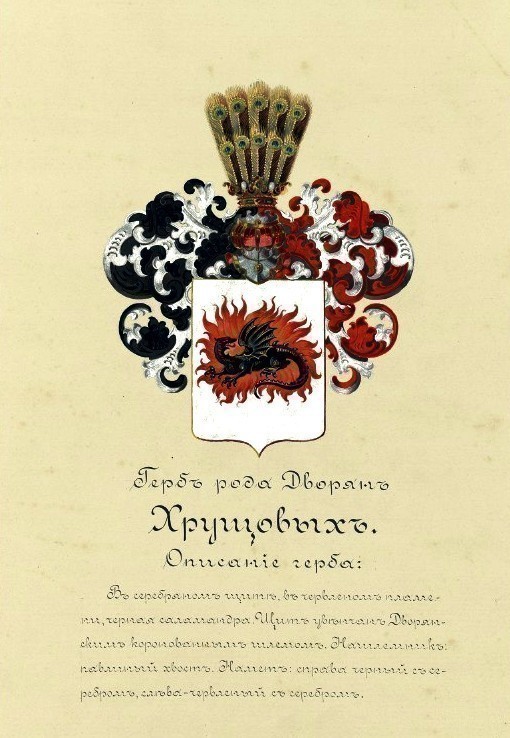 But not only the antiquity and the beautiful coat of arms was famous for this family. By the middle of the XIX century, the Khrushchev family possessed estates in six of the eleven districts of the entire Kharkiv province …
And here we get to the main goal of our journey – the Lifinian manor. It was built by Natalia Alexandrovna’s husband, Dmitri Alexandrovich Khrushchev.

He was a very interesting and active person. Educated at the Kharkov Imperial University. Part of their serfs he released several years before the abolition of serfdom. From 1858 to 1859, he was a member of the Kharkiv Provincial Committee, where he took care of improving the life of landlord peasants. In 1861 he received from the government a medal “for the labors for the liberation of the peasants.” From June 1865 to April 1867 was listed as leader of the nobility of Lebedinsky district.

In early 1859, Dmitry Khrushchev met Taras Shevchenko in St. Petersburg. After returning to Ukraine, the legendary Kobzar lived in Lifino between 6th and 9th of June, in the outhouse opposite the main manor house. In memory of this, he wrote poem there:

Oh, on the mountain, the romaine blossoms,
Cossack walks along the valley
And he asks the sorrow:
“Where is the destiny boasting?

Is it in the taverns with the riches?
Is it in the steppes with Chumaks?
Whether in the field in expanse
Going freely with the wind? ”

Neither there, nor there, friend and brother
But with a girl in a foreign house
In a rifle and a scarf
Hidden in the newly chest.

In addition to poetry, the famous guest left two landscapes “In Likhvin” and sketch “Oak” in memory of his visit. 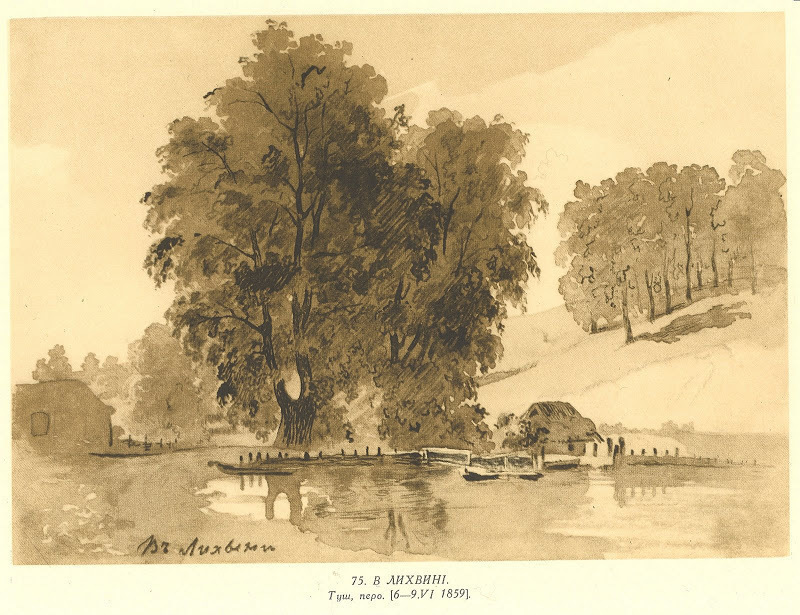 Painting T.G. Shevchenko from the website of the national museum of the poet. 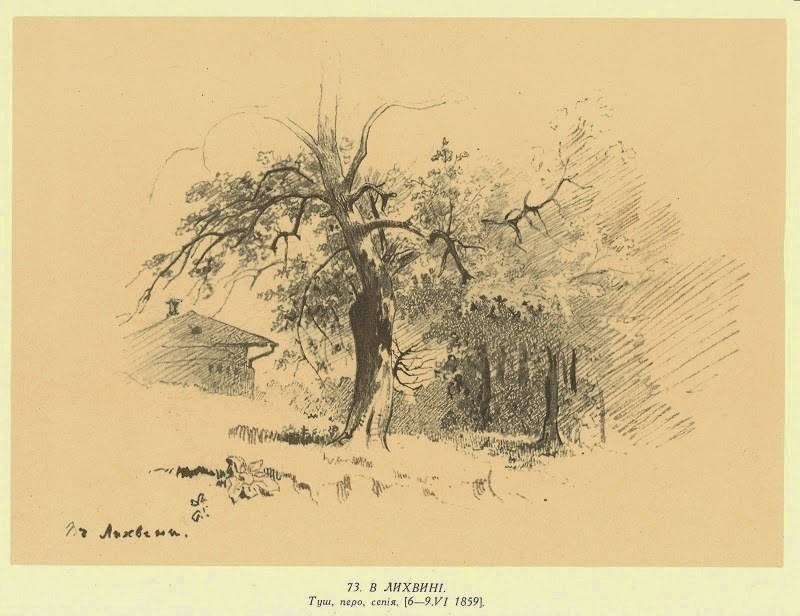 Painting T. Shevchenko from the website of the national museum of the poet. 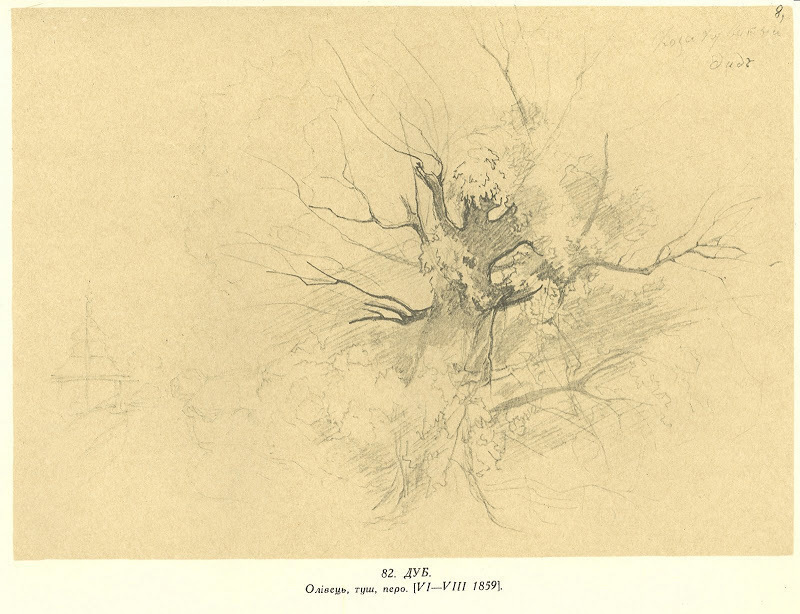 Painting T. Shevchenko from the website of the national museum of the poet.

In 1992, a remarkable historian of architecture and art historian Viktor Vasilyevich Vechersky visited the estate and carried out a comprehensive research work on its study. The results of the research, as well as the historical and architectural plan of the village, he published in his most important book, “Heritage of the town planning in Ukraine: theory and practice of historical and town-planning memorial researches of dormitory places”. 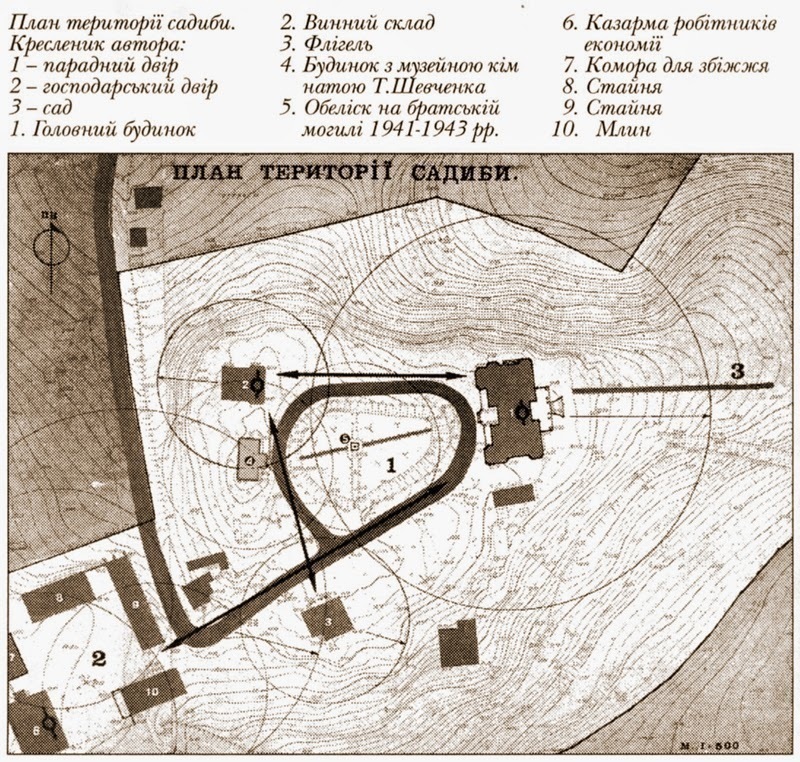 Photos from the book by V. V. Vechersky

The researcher gives the Lifino neighborhood the beautiful name “Swan Switzerland.”
“We have established that a unique landscape gives a great uniqueness to the village, the high compositional and visual qualities of which led to such a metaphorical name as “Swan Switzerland ”.

“The village has preserved the ethnographic types of buildings characteristic of Slobozhanshchina. However, of all the buildings, the Khrushchevs’ estate complex, consisting of two spatially separate parts: the ceremonial and economic courtyards is of the greatest historical and cultural value. The front yard occupies the top of a hill surrounded by deep valleys. Only from the west it is combined with a plateau where a rectangular, planar-oriented household yard is located. Within the the front courtyard are one-story buildings located: from the east – the main house; in front of it, in the northwestern corner of the courtyard – a wine warehouse; from the south – the outhouse…
… The main wooden house, on a brick foundation, was built in the 1830s. In the 1880s. it was bricked up outside, while making adjustments on the roof at the same time, with the result that the building instead of the late classical received the style features of the French Neo-Renaissance. 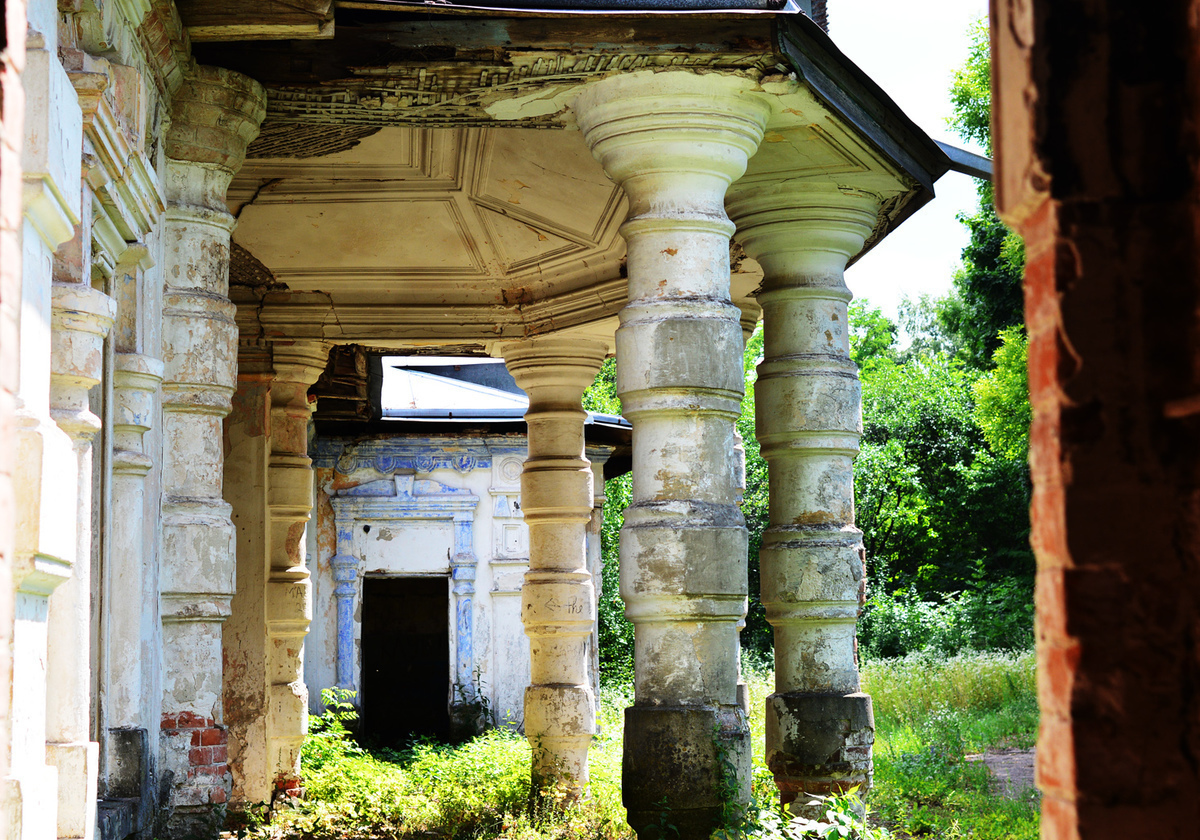 The wine storage is one-storey, located on the basement, two-chamber, rectangular in plan with avant-corps on the side facades. The facades have a brick decor in the form of blades, rusticated on the corners, ogival arches and sub-cornice arches. Structure silhouette is enriched by the gables and roof goggles. 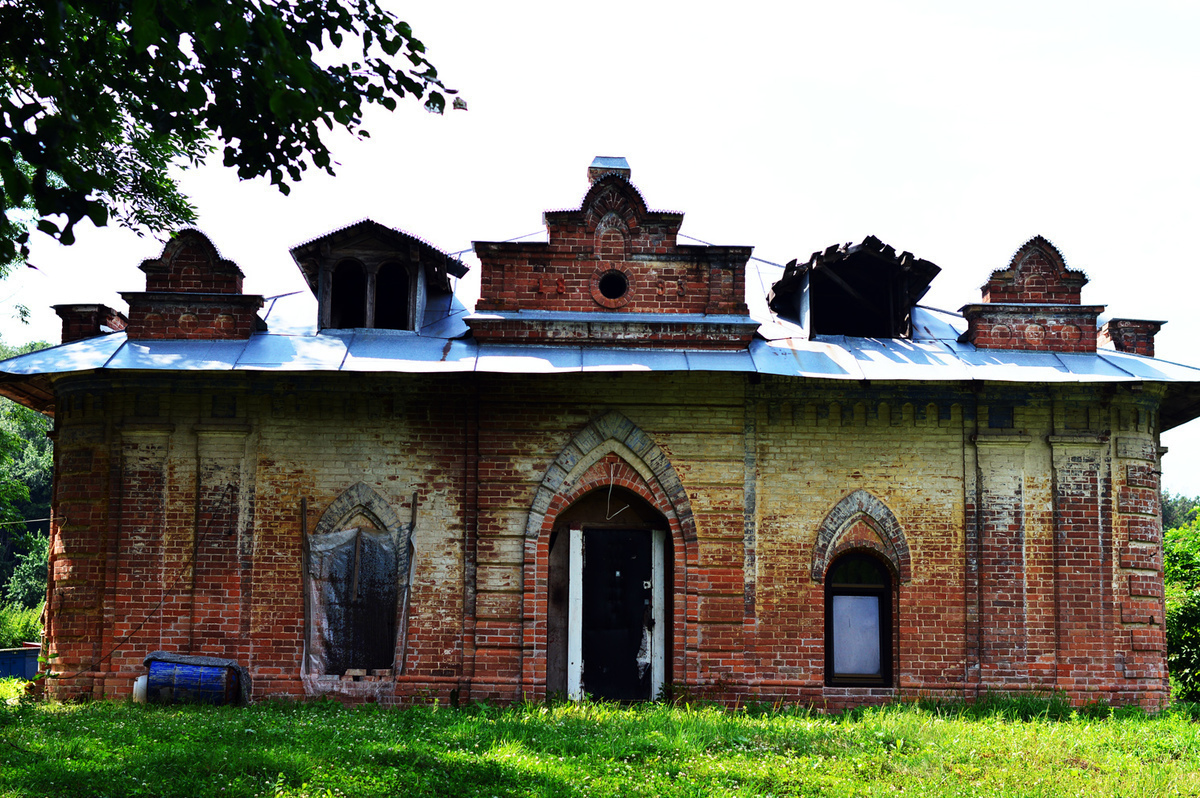 The outbuilding in the southwest corner of the front courtyard is rectangular in plan, symmetrical, with a four-column portico porch on the front facade and large windows with arched lintels and carved wooden decor. 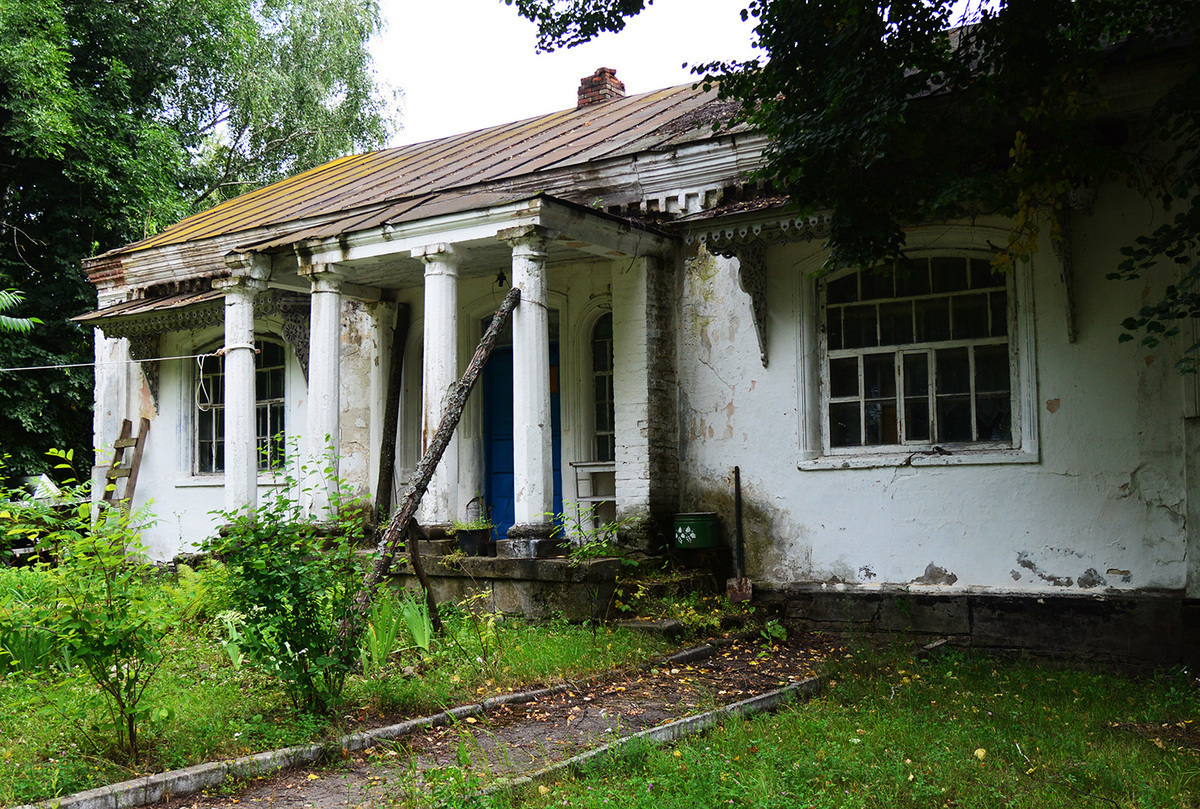 The owners themselves apeared sporadically in the estate. The estate was constantly supervised by tenants.
In 1862, Khrushchev build a distillery in Lifino, which employed 13 workers. It was supervised by a Jew Haim Gurevich.

The outbuildings that were located opposite the estate consisted of 5 objects around the perimeter of the rectangle and created a single architectural complex. Till this day, the two-storey barracks for the economy is impressive with its scale and beauty. 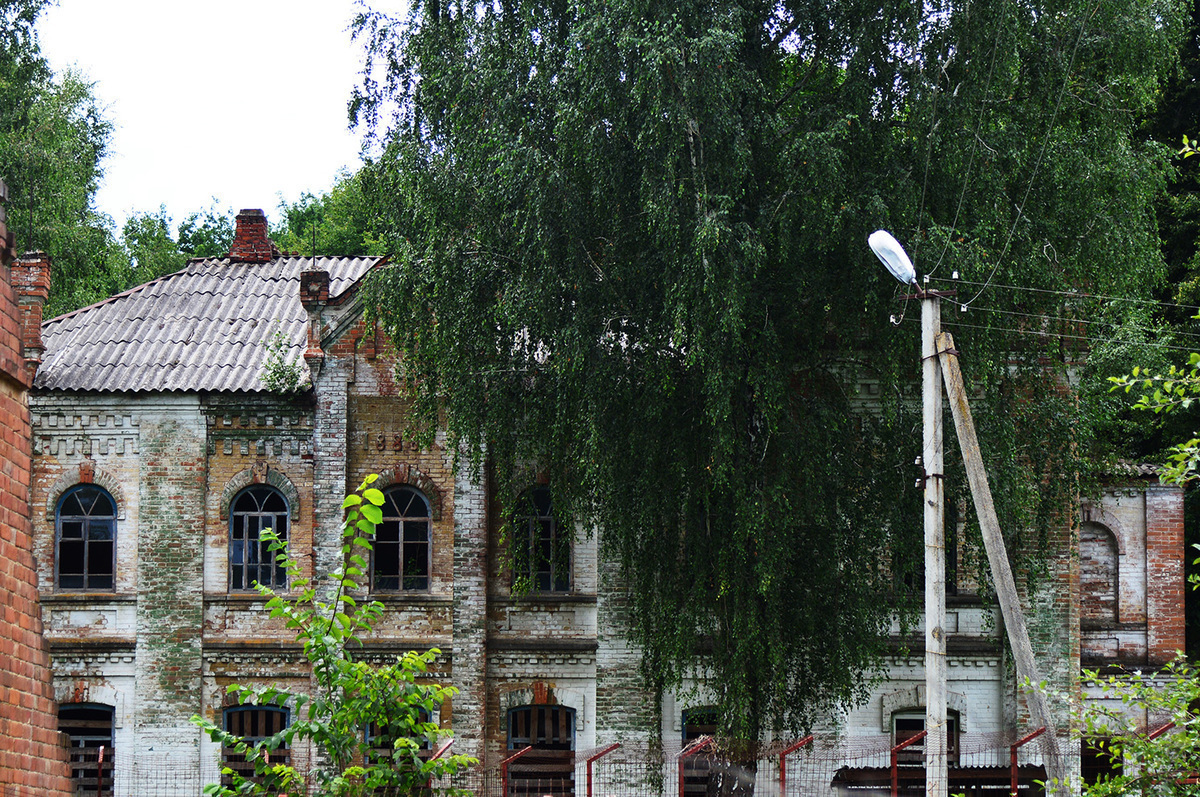 On the way to the manor, we saw a temple under construction. There we no churches in Lifino until 1917. The inhabitants of the bowery were married, baptized and burial service were done at that time in the stone Transfiguration Church of the Vorozhba village.

In 1921, one of the first communes in Sumshchina, “The New World”, was created in the buildings of the former manor.

Today, there is not a trace left from the house where the great poet of Ukraine lived. There is no more a memorial plaque installed in 1964 in memory of the Taras Shevchenko staying in an estare, as well as the museum room …

The manor itself, which is a memorial of architecture and urban planning, continues to delight the eye till this day. The private owner, in whose possession the estate is now, unable to restore it, literally saved Lifino. 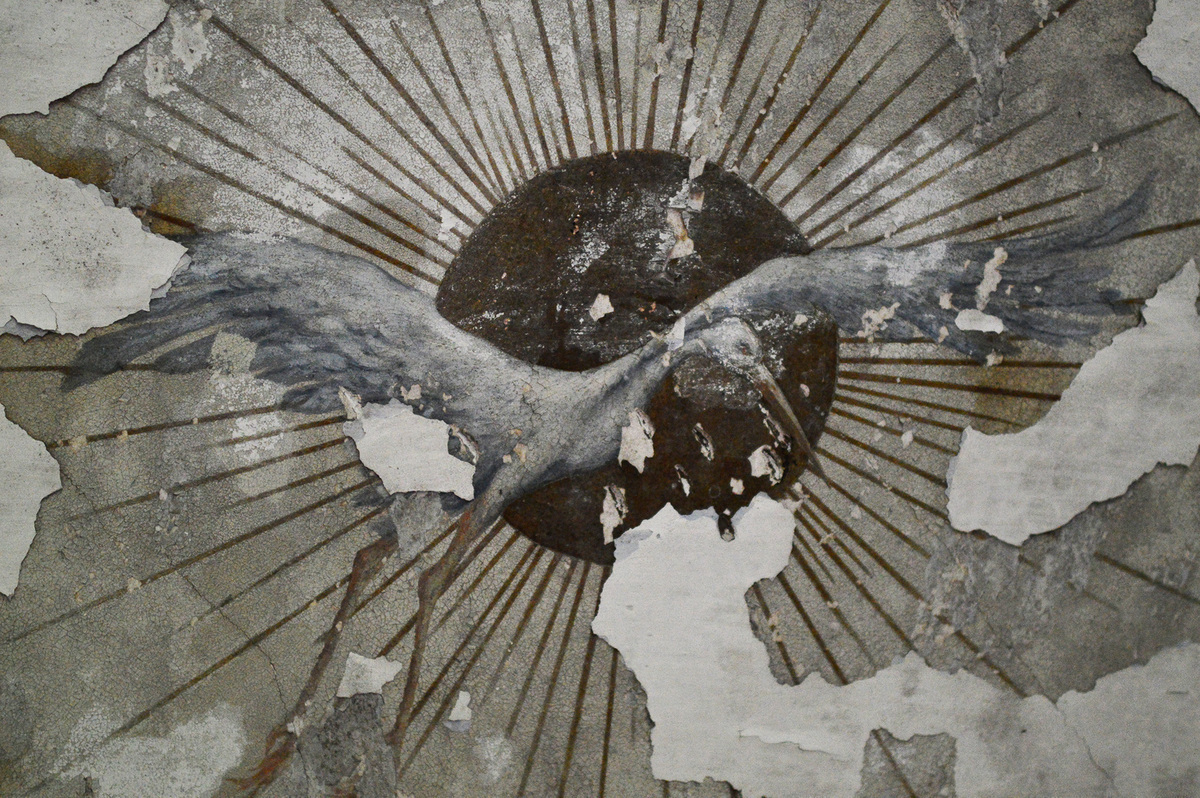