Castle Bridge ХІV — ХVІІ. The old town was connected to the fortress by a bridge. During the Turkish conquest, he was surrounded by a hewn stone and, obviously it is still sometimes called “Turkish” because of that. This is the only bridge in the world that is built along the river and does not connect its banks. The construction of the Castle Bridge coincides with the beginning of the fortress construction. 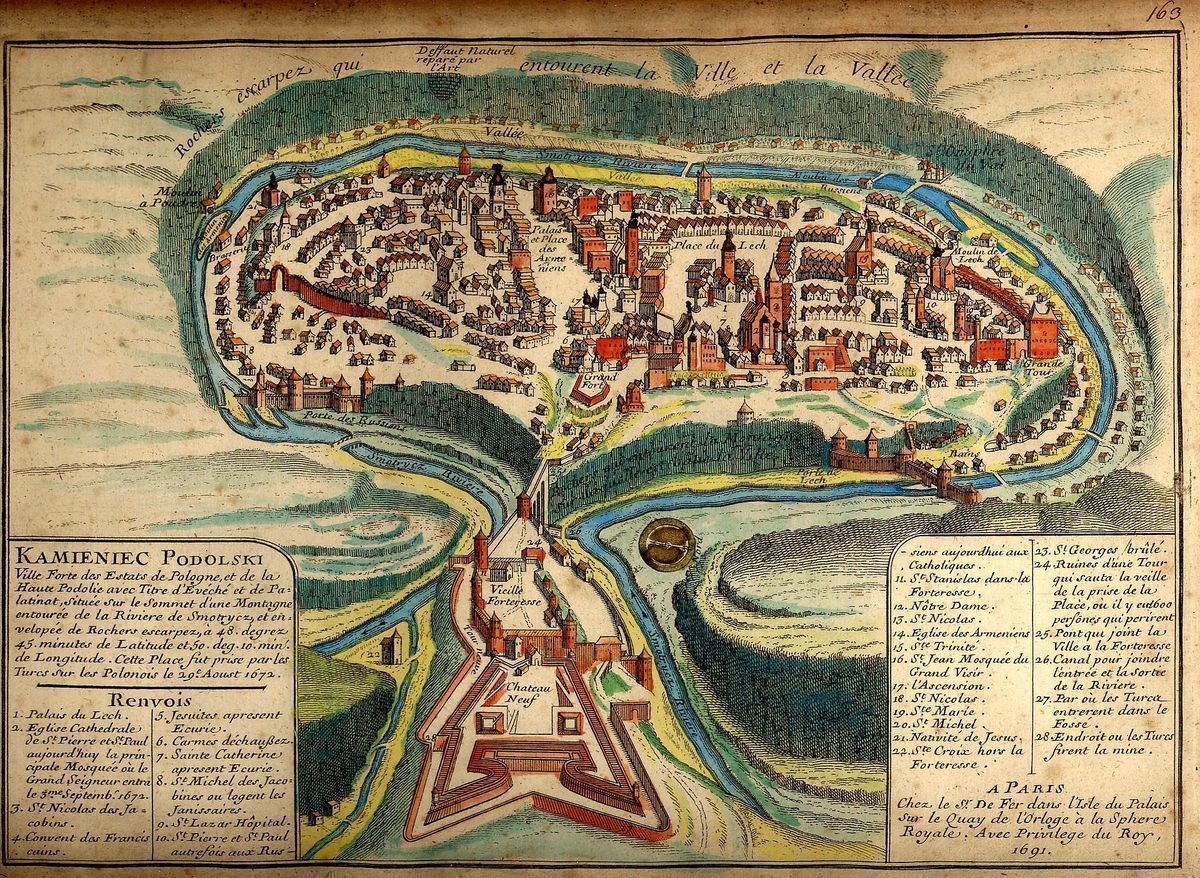 In 1544 the bridge was reconstructed. During this reconstruction, a vaulted arched channel was pierced in the rock under a bridge. During the 27-year Turkish rule of the city (1672-1699 pp.) a large reconstruction of the Castle Bridge was carried out.

After the fortress lost its strategic importance during the reign of Tsarist Russia in Kamenetz, it was decided to open the Castle Bridge for the passage of civilian transport. In 1855, during the repair of the southern wall of the bridge, props were added to the bridge – buttresses with iron rods, at the same time the laying of paving stones on the bridge work began. In 1662, in order to expand the bridge, the tower of St. Anne and the remains of the Castle Gate were dismantled.

The bridge was so narrow that two carts could not pass each other on it. In the second half of the XIX century another significant reconstruction of the Castle bridge was carried out: stone parapets were disassembled in order to expand the roadway, on both sides wooden pavements were laid on wooden consoles, and that changed the bridge look. At the beginning of World War II during the retreat of the Soviet troops, the bridge was blown up, as a result of which its upper carriageway was damaged. The occupants needed to establish this important transport route to the west, so in 1942 the reconstruction of the roadway was carried out.

In 1953-1956 the bridge came to an almost emergency state – and in 1976 the motor traffic on the bridge was stopped: it became only pedestrian. In 2000, the Castle Bridge was added to the world list of 100 unique monuments under threat of destruction. Only in 2005-2007 after repair, the Castle Bridge allowed cars to drive for a limited number of hours.

Castle Bridge is included in the domestic “Book of Records” as the oldest bridge in Ukraine.

After 27 years of possession of Kamenetz by the Turks (in 1672–1699) and a serious reconstruction of the bridge, they began to call the bridge Turkish. Some researchers even believed that the bridge was built by the Turks.

In the historical and architectural essay “Kamenetz-Podolsky” (1968) by Eugeniy Plamenitskaiy the sight was called simply – Bridge (with a capital letter). But in the fourth volume of the publication “Monuments of town planning and architecture of the Ukrainian SSR” (Kiev, 1986) in the certificate prepared by Eugeniy Plamenitskiy, the bridge was named as Fortress Bridge.

In publications of the early 1990s, Evgeniy and Olga Plamenitsky constantly called the bridge as the Fortress Bridge – as they explained, given its leading role in the defense system of not only the castle, but also the entire fortress city (an example of the 1995 article “The Kamenets-Podolsky Fortress Bridge: chronological and typological attribution “). In subsequent publications, the researchers abandoned this name and returned to the historical – Castle Bridge.